Travel: The Roads of “il Lombardia”

The cycling around Lago di Como in northern Italy is among our favorites, and it’s even better when ex-pro Fabio Negri of ComoLagoBike.com leads the way, and our home base is the Albergo il Perlo Panorama.

Some Background
ComoLagoBike is a group of guys that simply love to ride their bikes (they’re nothing like those hot shot Italian clubs that race the Gran Fondos like children that have eaten too much candy). In addition to riding, their other passion is this territory. And you can’t get much more spectacular than the area around Lake Como, where mountains rise dramatically straight from the banks of a deep lake. Like all proud people, ComoLagoBike gets even more excited when they can share this splendor with others. Therefore, part of their activities include organizing rides and providing corresponding services like bike rental, airport pick-up, hotel reservations and so on. Two of the main guys that are driving this project forward are Carlo Sancassano and ex-pro Fabio Negri. 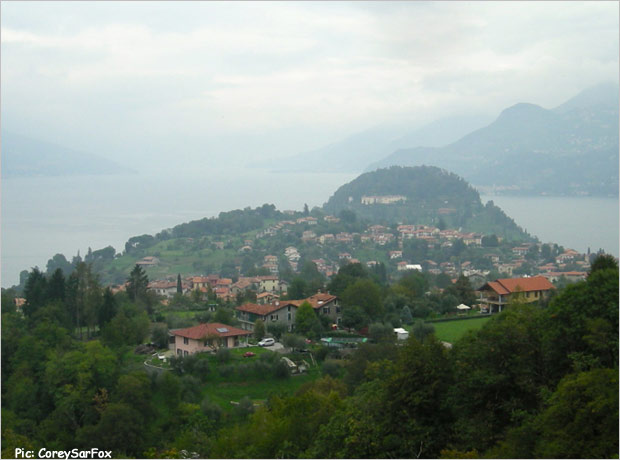 Book your stay at Il Perlo, and this is your view.

Carlo is actually a hotel guy. His place is called il Perlo, a two star hotel situated precisely on the first few kilometers of the legendary climb to Ghisallo (you’ve probably seen it here on PEZ before). It’s a nice, clean, simple place where you can feel comfy. You know, those first killer ramps that hit 14%? That’s where he’s located. Hospitality runs through Carlo’s veins like honey in a hive. Surprisingly, he’s not really out to make money – all of ComoLagoBike’s rides and services are very reasonable. Rather, they are convinced that if tourists come and experience the area, they will return and bring their friends. And eventually, that growth will be good for all of the area’s merchants. And I think they are on to something here! 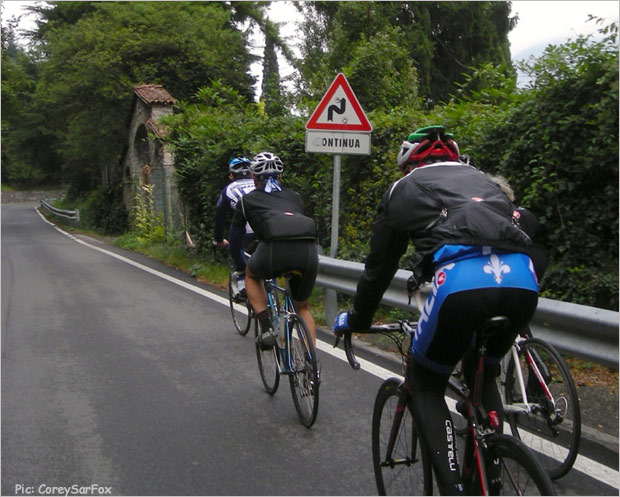 The Ride
I rode with Carlo last year (read the story here), and while we were blessed with gorgeous weather, sunny and warm and clear and crisp – actually, the best way to enjoy all of the wonderful views – this year was different. It seems that every major Italian race saw downright crappy weather, from the Milano-Sanremo to the Giro and the World Championships and now il Lombardia. Saturday morning, dark and gray with some heavy drops and a very wet, slick road did not bode well for our ride. This was actually the last ride of the program. On Thursday, October 3rd, the group climbed the Valcava, Colle Brianza and Villa Vergano. On Friday the 4th, they conquered the Onno, Muro di Sormano and Ghisallo. We met at il Perlo in Bellagio at 9am and I was ready to abandon the whole thing. Carlo and Fabio were also concerned and it even discouraged the lovely Laura from joining, but the others’ excitement convinced us to ride down to Como and see what would happen from there. That seemed reasonable enough. 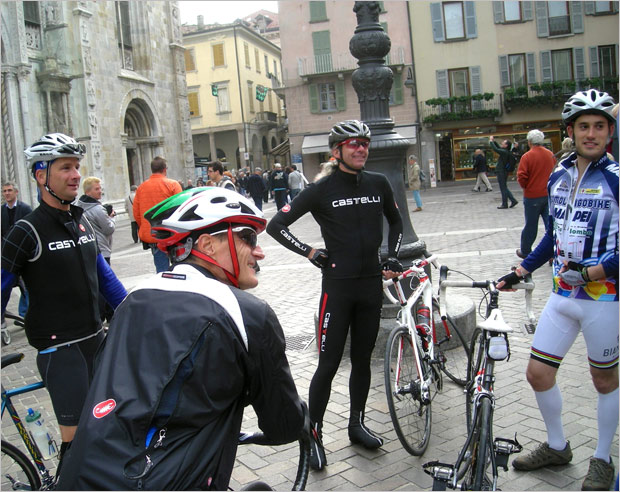 The ride to Como is typical “Italian sali-scendi”, full of ups and downs on a perfectly re-paved road that follows the lake. It was a good time to warm up and get the muscles moving. The temperature was around 10- C, the air was heavy but it wasn’t raining. It also gave me time to check out the others on the ride. Since I’m bad with names I made up my own nicknames for them. The German-with-the-coda (or ponytail) was on the front, setting a good pace, doing Fabio’s job quite well. The Coda is from Stuttgart but has relatives somewhere in the area. There was a Canadian (a specialist in pain, no kidding, he was at the International Conference of Pain in Florence and decided to come here afterwards) who was also quite fit, having ridden the other rides during the week. There was Martin (one name I did remember), an Englishman on a fancy, new Wilier with deep carbon wheels, who lives nearby. He brought a buddy along that I named the Fagiano (more on this later). Lastly, there was the American who reads my stuff on Pez. His wife is a nurse in the military, stationed near Naples. I liked his steel ride, he liked my aluminum one. All of the others rode carbon. 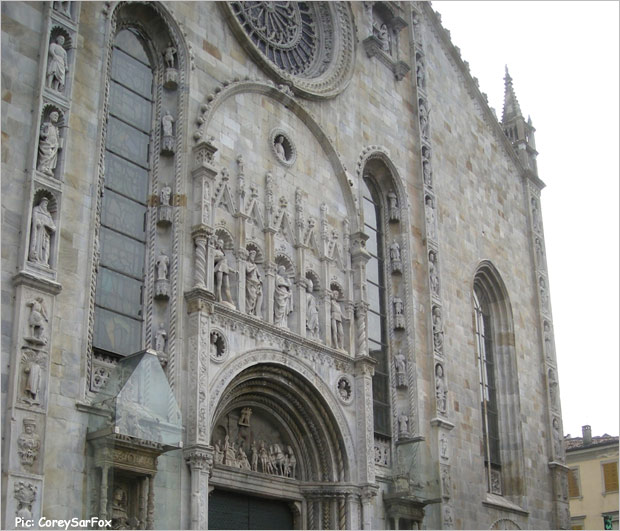 I assumed that we’d head back after the 30km to Como, so I didn’t even bother to take out my camera and shoot something. But the weather held out a bit longer as we headed into the center. Fabio wanted to show us the Duomo or main cathedral. A real beauty that forced me to get the camera out of its plastic bag. I wanted coffee, but the boys were excited to keep moving. Also encouraging, there were some faint patches of blue trying to breakthrough the gray sky. So we did a loop up the San Fermo climb. “It’s just two kilometers,” said Fabio. He would say this often, to quiet our concerns and heavy breathing – even when the roads kept rising after those hard 2000 meters. As is often the case, the harder the effort, the more majestic the views. These were pretty good. 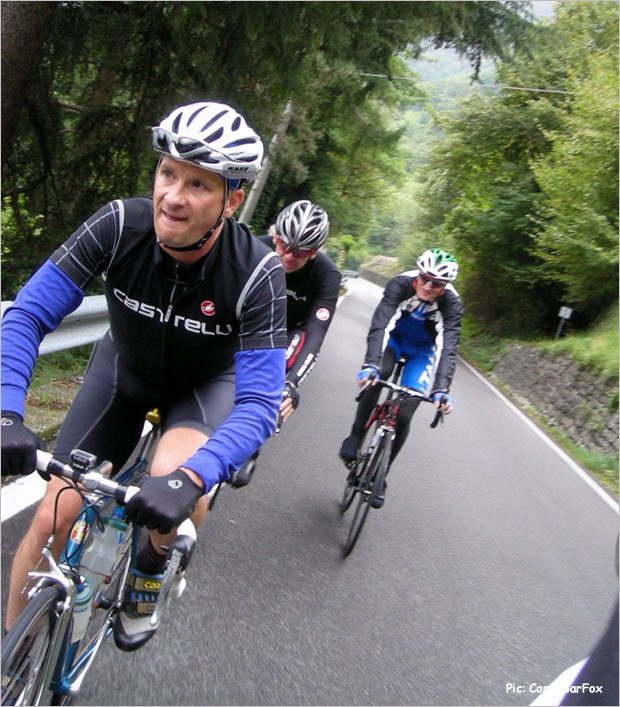 The descent back into Como was fast and technical. Let me just say that none of the climbs in this area are easy. And the descents can be quite tricky, especially because the Pro race requires the communities to keep their pavement fresh and slick, which is great in the dry, yet super dangerous when wet. This is really a place for medium to expert cyclists. “I went out on a guided tour with a woman recently that had little experience on a racing bike and it wasn’t very good. After about 30km we had to call Carlo to pick her up with the van,” said Fabio. 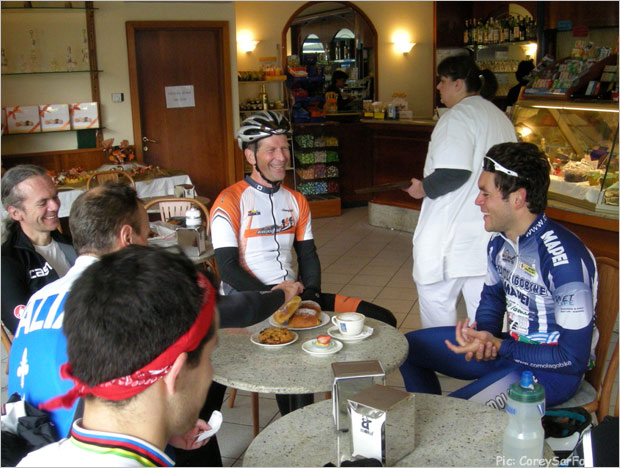 Since we were now properly warmed up and charged by the descent off of San Fermo, Fabio chose a route that would take us up to Erba then descend the Onno and then head back to Bellagio. After a fair amount of work – there was a stretch of 2km (always “two kilometers”) with a gradient well over 10%, I convinced the group to stop for a coffee break. Stopping at an Italian cafe for cappuccinos and pastries is a fundamental part of cycling here – riding hard earns you the right to indulge. The downside of stopping is that your muscles also cool down. A couple of old Italian cyclists were outside looking at our rigs and playing the which-bike-would-you-own game. They both chose Martin’s. Which is funny, because if fate had played its cards differently, both Fabio and I would have crashed hard into that pretty bike just minutes earlier as Martin raced in front of us before abruptly deciding to stop at this particular cafe. This was also our fault, I like to chat with Fabio and we weren’t paying enough attention to the road.

The Fagiano
Back on the bike and some anonymous kilometers of climbing and descending as we worked past the town of Erba. Some of these roads I now recognized from last year’s ride. Hey this one leads up to Ghisallo (from the backside), right? That one leads to the Sormano. Now came the Scatto del Fagiano: this is Italian cycling jargon and it translates to the Pheasant’s Escape. It is a classic move where a cyclist hangs out in the middle of the group and makes a few feeble attempts to breakaway to convince the group that he is weak. Then when he makes his real move, it catches the peloton off guard. Well, Martin’s friend had been making a few feeble moves off the front, but none were very convincing so I told Fabio to watch out for that guy, he’s a Fagiano. “Well, you know what they say, the pheasant always gets caught in the end,” Fabio responded. 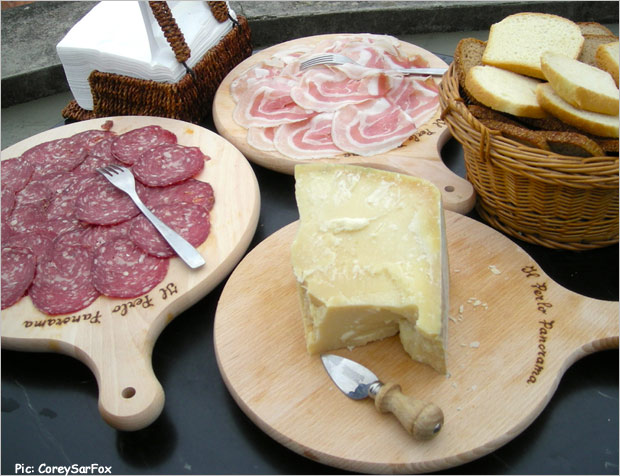 The descent from Onno was great. Really great. The pavement was also dry in patches. The German was flying down in the lead. Martin was next and I was following his trajectories since he seemed to know the descent. Fabio asked me afterwards if I enjoyed the views, “what views? I was too busy concentrating on my descent, man!” The next day I would see Thomas Voeckler rocket down this same road, but much wetter, with over two minutes on the rest of the peloton. The Onno descent drops you out on the road that runs along the lake from Lecco to Bellagio. Il Lombardia takes a right hand turn towards the finish in Lecco, with the brutal Villa Vergano climb in between. A pink race course signs indicates 30km until the finish. However, we turned left heading back to il Perlo. More sali-scendi, but with a tailwind. Fabio was now in charge, leading the group and taking care of the headwind that we were making. Oh, the cycling gods were favoring us today. 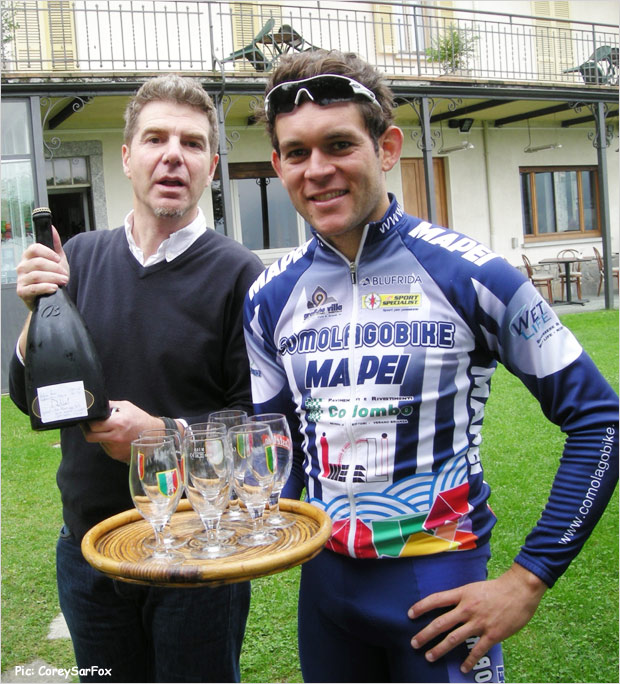 Now came the real Scatto del Fagiano. He really took off. The rest of us kept our steady pace, letting him go as we had before. I must say that we were very fortunate because everyone in our group had about the same fitness/experience level. No one held the group up, which makes a big difference when keeping things moving along. As we approached Bellagio and the first few kilometers of the climb to Ghisallo, Fabio also took off to see if he could catch the pheasant. I decided to set a very leisurely pace, since I was now starting to feel all of those climbing kilometers. I made it to the hotel where we were assembling on the patio with its wonderful view over the lake. Carlo prepared a post-ride snack of cold cuts and cheese. And Fabio had brought some Belgian style beer that he brews himself. The Fagiano showed up a few minutes later. What the hell happened? He didn’t get caught this time because he took a wrong turn, down the Ghisallo, instead of up. One last treat for the day: a few minutes later, the U23 race passed right by the hotel (Fabio’s best result ever was a second place in this event in 2007). You could really see how hard these young guys were working to get up this mean mountain and into a Pro career. 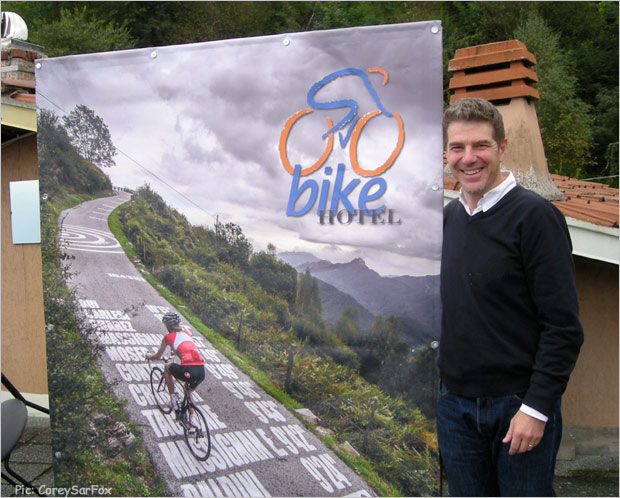 Wrap Up
Some data from the trip: we went a little over 80km, the average speed was 24km/h with around 1,250 meters of climbing. At dinner that evening, Martin (like a good fisherman) cooly swelled that figure to an impressive 8,000 feet. The next morning, the Canadian and American were going to ride some more, then the rest of the group would be guided around the Pro race in two vans by Fabio and another ComoLagoBike guide. I would be following the race with Star Photographers, Jered and Ashley Gruber. But that’s another story. We did catch up with the others on the Muro di Sormano climb and they seemed to be enjoying their day. Though it would get even better because they had VIP seating at the Finish Line in Lecco. The best thing about riding these famed roads is that il Lombardia takes on a new, greater significance. You learn firsthand that the rider that wins it, really deserves that victory. You need excellent bike handling skills, strong legs and lungs, and heaps of courage to conquer this course. 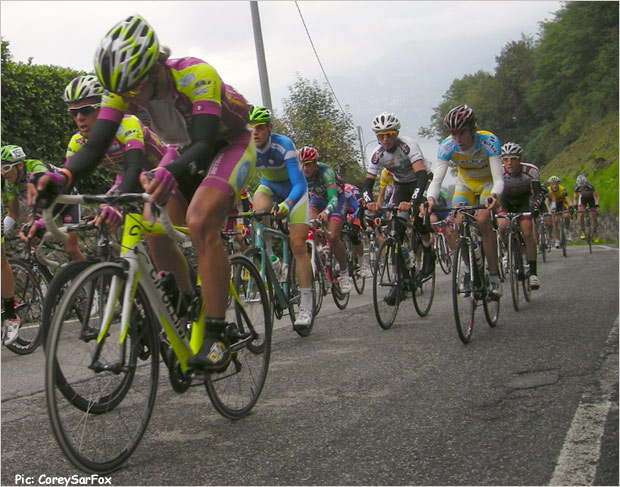 If you have any interest in exploring this great cycling oasis, then Carlo, Fabio and the ComoLagoBike guys can definitely make your stay more convenient and certainly more meaningful.