What a day on the mighty Tourmalet, and even more action on Luz Ardiden! The Lance win, the Lance crash, Vino blows, Mayo tries, Jan can’t and all the rest! I rode the famed climb just hours before the race arrived…

The Best of PEZ – To help make brighter these winter days, we’ve selected for your viewing pleasure some of our favorite stories to revisit. This story originally ran in July 2003.

——
It’s 6:15 in Lourdes after one of the most exciting stages of this most exciting Tour, and they’ve playing the Lance crash on French tv non-stop, with an actual panel of ex-riders, French journalists, and celebs discussing and analyzing every frame of film. You probably know by now that Lance’s bars got hooked on a yellow musette bag, sending him and Mayo to the deck. But did you know the culprit was not the fat guy standing right there, but some little kid – all you can see is the kid’s arm sticking out of the crowd, and Lance’s bars snagging the bag!

After the race, Lance was surprisingly happy that he’d won, and seemed to shake off the incident as a part of racing – at least that’s what I could get with my limited understanding of French. I say surprisingly because it looked like the crash is what lit Lance’s fire on a day when Jan delivered a knock-down punch on the slopes of the Tourmalet.

I rode the Tourmalet today myself, and can tell you it’s one huge HC climb, that rewards you at the top with views across the top of the Pyrenees from the 2114 meter (6500 feet) pass, which is still 500 meters below the peak of the mountain. Much like Alpe d’Huez, the parade of fans and car jams started 10 km below the start of the actual climb, but fans were not packed like sardines to the extent as d’Huez.

The guys from Inside Track set a 7:00 AM shuttle time this morning, so we’d have plenty of time to drop near the start, ride about 35 km to the summit, and still descend and get up the 15km climb to Luz Ardiden. This is great, that Joe & Frances are so well organized, that all the guests have to worry about is packing their camera and doing the day’s ride… Most of the climb was lined with campers as usual. 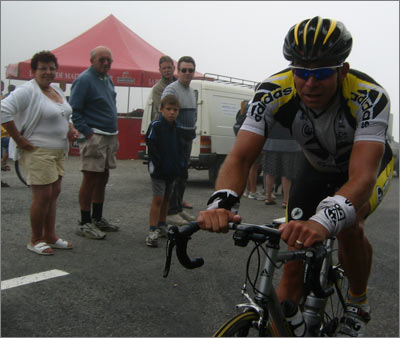 The climb is about 20km long, and starts out gently enough, rising slowly up a valley. The day was overcast and cooler, which was perfect at the bottom, but threatened cold rain at the top. The middle section was cloudy, and you felt the cold air even though you were sweating like a “peeg”. Pez fan Ed Kurzenski “hauled his carcass” over the top and up Luz Ardiden, to an obviously amused local crowd.

Then we broke through the clouds just after the snow tunnels – just at the ski station of La Mongie. From there it was clear skies and sunshine all day…

Thar she blows! The summit… 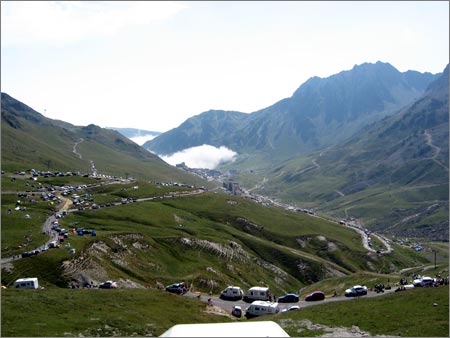 Check out those switchbacks, and to make matters worse – there’s a good headwind blowing at the top. 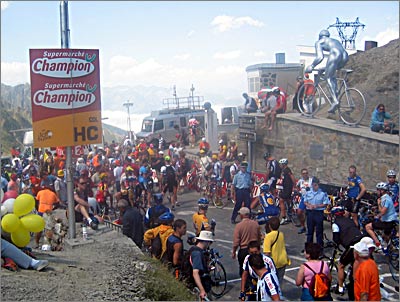 The summit of the Tourmalet – it’s a full-on fan photo frenzy as everyone wants their pics in front of the memorial to Jacques Godet. I say a cold beer in the restaurant is the only fitting way to celebrate your achievement. 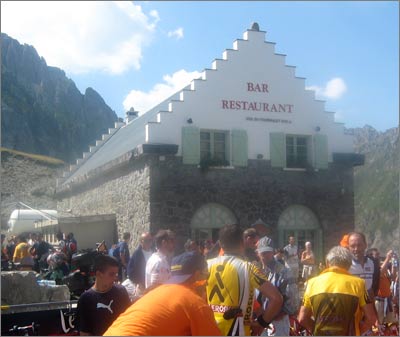 So You Wanna Start A Continental Team

Dean Downing Gets A PEZzing