Almost 18 months ago our editor in France Chris Selden moved from the cold and flat of the North East of France to the warmer climates of the South and in particular the Hérault Valley. With the warmer weather also came more hills and some simply spectacular riding. Here’s Seldo’s look at his new region from the best seat possible – on the bike!

Ed’s note: This story first ran over a year ago when I first moved to the area but my initial impressions haven’t changed, if anything the region has grown on me even more. Hills, quiet roads, ancient villages and a great cycling community make the Hérault Valley a true cycling paradise. Look out for a new ‘Top Ride’ story on more of the region soon on PEZ.

Over the last 10 or so years I’ve been fortunate enough to live in some pretty memorable places for a bike rider which included such great locations as Switzerland, France & Australia. I’ve ridden most of the famous mountains in Europe and France in particular and have even had the pleasure or extreme discomfort of racing over some of them. All of these miles on the bike and in the car travelling between races led me to thinking that I’d already seen the best parts of France for riding but fortunately this wasn’t true.

When my wife’s professional duties led us to move from the cold in the North East of France to the warmer temperatures of the Herault Valley in the south I quickly discovered a wonderland of riding which rivals the best I’ve ever seen! 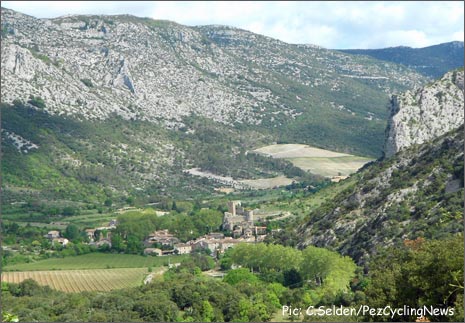 La Vallée de l’Hérault is a region in the south of France, 30km North West of Montpellier and just 50km to the north of the Mediterranean and its famous beaches. Having never stepped foot in the region beforehand I was flying blind on my first ride and simply took my bike outside and pointed North as I figured that was a good a direction as any to go. Wow. Beautiful gorges, valleys, mountains and picturesque villages seemingly around every corner and to top it off – very little traffic. It was almost paradise.

The only thing that let that first ride down was the headwind I had on the way home. In fact the wind is the only real down point of the region. I’ve since learned though that North isn’t the only good direction for riding with great rides in every single direction so now when I leave home I always check the wind first. If it’s windy, I simply start the ride heading into the wind so then I can come home with a big tailwind behind me to make me feel strong….. 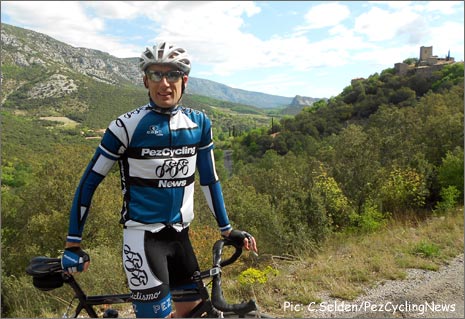 First ride in the region and around each corner were beautiful little villages like this one perched on the hill. Hill being the pertinent word here – they’re everywhere.

So where’s the best riding? If I was a visitor to the region I would start at a central axe like Clermont l’Herault, look which way the wind is blowing and then simply ride off into the sunset. If you choose the small roads you simply can’t go wrong. Amongst my preferred routes are the circuit around the Lac du Salagou, the climb up the aptly named Col du Vent (Windy Mountain) or riding the tiny seemingly abandoned roads around the beautiful historic village of Pezenes-les-Mines. 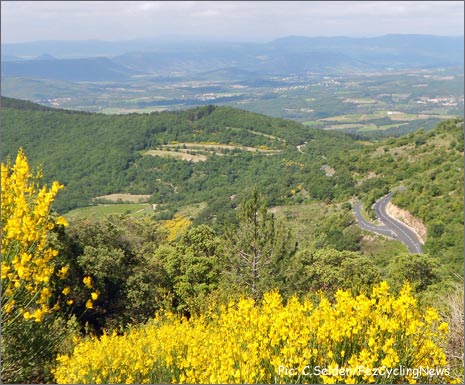 The view from the top of the Col du Vent, 9km long with a nice and manageable average gradient of 5.5% 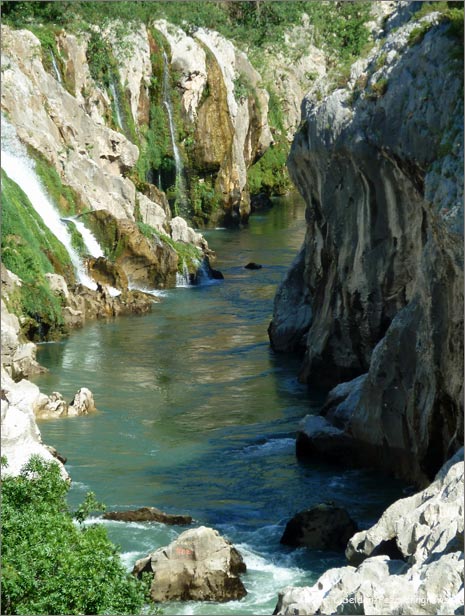 Just one of numerous beautiful gorges in the region. This one is on the D4 heading to St Guilhem-le-Desert

A tourist favourite in the region is St Guilhem-le-Desert which is officially listed as being amongst one of France’s most beautiful villages. This amazing village is built on the Herault river around an Abbey which was founded back in the 800’s and is truly worth a visit. Easily accessible on the bike via the D4 there are numerous rides around the town and it is a great place to stop and taste the local food and wine the region offers. 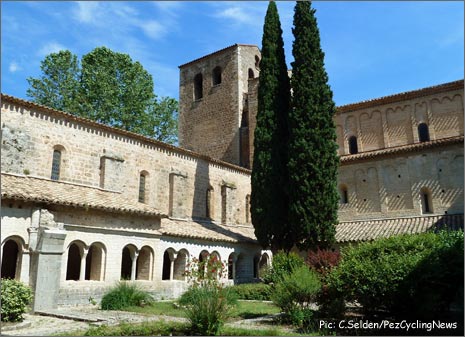 It’s really easy to see why Saint Guilhem-le-Desert is classified as one of France’s most beautiful villages. This photo’s from the cloister in the 1000year old monastery. 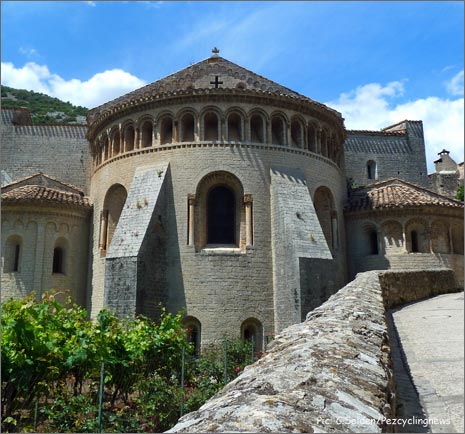 The exterior of the monastery at Saint Guilhem-le-Desert.

So if this region is so good for riding, does the Tour de France pass through? Well the answer to that question is yes and no. The tour has utilized these valleys and medium mountains many times before but this year’s race only gives a passing mention to the region on the 13th stage from Saint-Paul-Trois-Chateaux in the Drome department to Le Cap d’Agde in the Herault department. 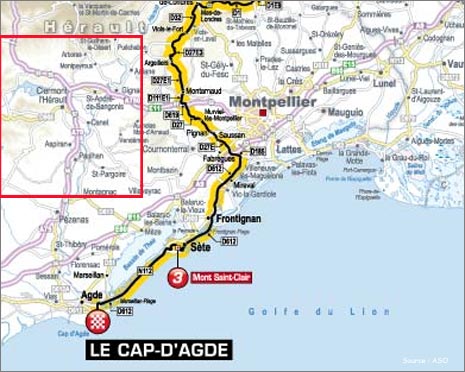 The 13th stage of the 2012 Tour magically misses the best riding in the region by completely bypassing the Herault valley here highlighted in red.

Now Cap d’Agde might be in the same department as my area of ‘La Vallée de l’Hérault’ but it couldn’t be more different. There are no mountains in Agde, pretty villages nor valleys as they are replaced by high-rises and hotels on the beach. Great for a holiday, but not so good for riding with huge amounts of traffic in summer. In fact when the 13th stage will finish there this summer they will have a ready-made crowd of nudists for the stage finish. Yes, you read right – nudists.

Agde is famous or perhaps infamous for its numerous nudist colonies that are dotted throughout the city with accommodation available from one star camping right up to 5 star luxury – all ‘sans clothing’ of course. I wonder what the ASO has lined up as accommodation for the teams? Or more importantly where will all the journalists be staying? A quick look around the standard bike race press room and you would not want to see many ‘au naturel’ I can assure you.

So with the tour at least coming into my region and despite the fact that they are bypassing all the best bits it would be remiss of me not to at least go down and check out the route. With a lunchtime rendezvous on the beach at Sete planned with my wife and daughter 60kms away I thought that this could be a nice ride and I wasn’t disappointed. 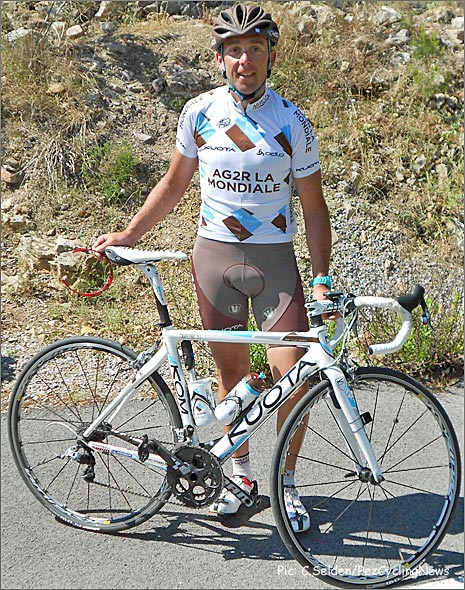 On the approach to Sete I saw a rider in full Ag2r kit, helmet, bike, socks, bidons – who is this guy? Well it wasn’t a pro but it was their soigneur, Alexandre Lecocq who was in the region on holiday for a couple of days between races. A fun guy with a big smile, Alex invited me to ride with him for a while but unfortunately I had a rendezvous on the beach to go to. Maybe next time Alex?

Before heading out on my ride I checked out the stage notes from the Tour’s guide and I saw that the race planner had somehow managed to miss every interesting climb on the way down to the coast. With beautiful and challenging climbs literally to the left and the right of the riders the entire stage the organizer has done an amazing job to find an almost flat first 194km of this 217km stage. I once had a training partner who had this same skill which he had transformed into a true art form – if there was an easier way around a hill – he’d find it! Chapeau Monsieur ASO. 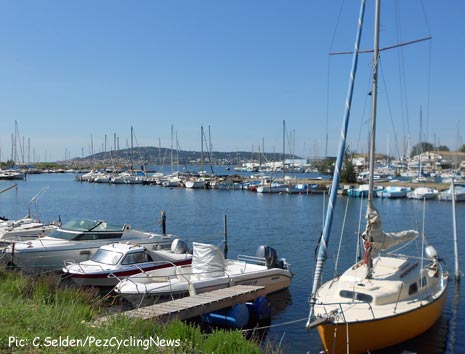 Leaving the valleys and vineyards behind, this is the view the peloton will see as they approach the seaside town of Sete with the Mediterranean, the boats and the climb of Mont-Saint-Clair in the background

Then when I thought that this stage would be just a simple transition spin for the breakaways or a mass sprint I see that they then found a 3rd category climb down next to the beach at Sete with just 23kms to go. Could this climb somehow change the face of the stage? It is after all just 1.6kms long so how on earth did it get a 3rd category rating? Well, now that I’ve done the climb I can tell you how – it’s seriously steep! (Ed’s note – yes, I did the climb but actually the wrong side of it after some wayward directions from a local! The steepness of each side of the climb though is impressive) 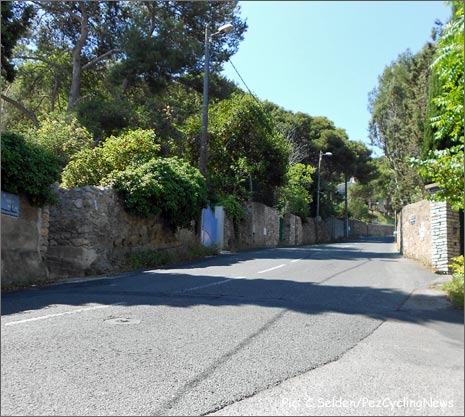 ASO lists the average gradient at a leg snapping 10.2% and I can tell you that certain sections were much steeper. In fact after stopping to take a photo 1/2 way up I almost fell off trying to start again – it’s that steep. 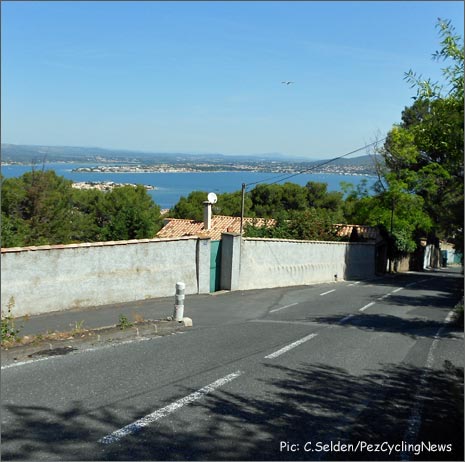 If the peloton were to turn around 1/2 way up, this would be the view they would be treated with.

I can definitely see Cavendish, Greipel and co. getting shelled out the back very quickly here with the advantage going to the climbing sprinters like Sagan and Goss in my opinion. Could Cav get back on though with 23km still to go to the finish after the summit? That will all depend on the race situation and the famous wind in the region. As one local racer from the Sete club told me, ‘If the wind gets over 110kph we normally don’t go out and train but anything up to that is ok.’

Luckily for me I had just a pleasant 20kph sea breeze on my ride so I had no problems riding with the locals but 110kph down on the coast could certainly make for an interesting end to the stage. If you’re coming to the region to watch the Tour I’d recommend heading down to the Mont-Saint-Clair climb at Sete to see the real action of the day in any case and then staying on in the region for some great riding afterwards. 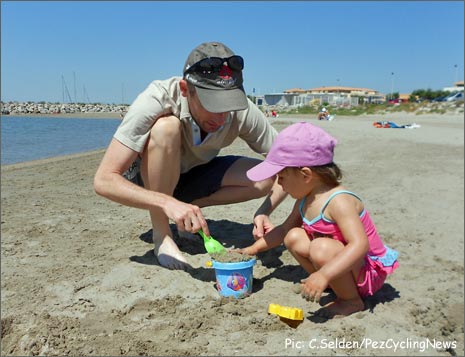 Now this is a way to finish a ride, relaxing and playing with the family on the beach – and no, it wasn’t one of the famous nudist ones. For some reason they frown upon cameras down there. 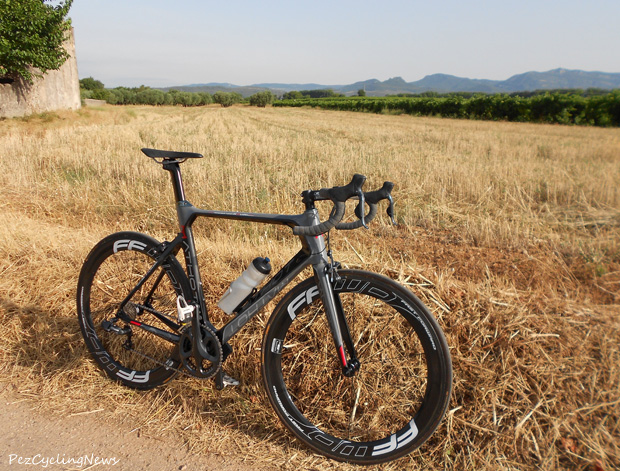 A teaser pic from the upcoming ‘next part’ of the Hérault Valley. This is a photo of a bike that I currently have on test, a Mathot Pallium that is proving to be the perfect partner for my adventures into the hills of the Hérault Valley – or in this case, just to the end of my street!

To see more riding from the region have a look at this video that the local cycling club produced to promote their annual cyclosportif in the region.

See you in the valley!
Seldo.