Analysis St. 9 Cadel Evans is a quiet rider. There’s nothing very flashy about the way he rides, but his consistency and ability to be in the right place at the right time has brought him tremendous success as a cyclist. So it was a definite surprise to see him dropped near the bottom of the Col de Madeleine today in Stage 9. Reports from after the stage confirm that there was something significantly wrong with the world champion and yellow jersey leader of the Tour: he was racing with a fractured elbow.

Evans was involved in a crash just six kilometers into Stage 8, where he apparently suffered the fracture. He nevertheless managed to stay with the leading group of yellow jersey contenders and moved into the overall lead after Sylvain Chavanel was dropped. According to the team, they kept Evans’ injury a secret during the rest day in order to see how Evans would fare today, and he did pretty well over the first few climbs of Stage 9. But the Madeleine is a brutal mountain and the pace set by Astana and Saxo Bank at the front of the yellow jersey group pushed Evans – and pretty much everyone else – over the limit. It’s a very unfortunate turn of events for Evans, as he appeared to have better overall form this year than he had at the Tour de France last year. 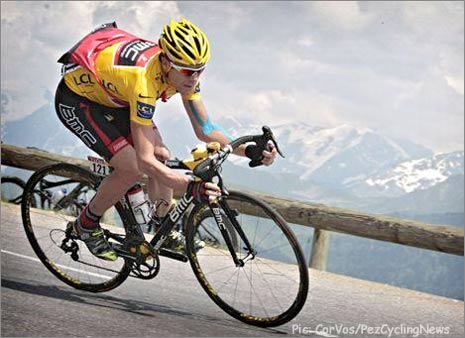 His painful broken elbow visible under minimal bandages, Cadel soldiered on through what can only have been an horrific day.

Some people may ask how an injured elbow can derail a cyclist’s ability to climb a mountain so significantly. After all, you can spend the vast majority of the climb in the saddle, and – as the logic would go – as long as the legs are good, you can minimize the impact that an injured arm has on performance. But a fractured elbow means you can’t pull on the bars with both arms while you’re climbing in the saddle, and makes it extremely painful to get out of the saddle to stretch your legs and back, or respond to accelerations. When you’re trying to match the speed and power of the best climbers in professional cycling, you need all parts of your body to be fully functional, and even a slight injury can mean the difference between staying with the lead group and losing time. A fractured elbow – even if it’s not a bad fracture – is more than a slight injury.

Anyone out there who says, “Aww, suck it up. It’s just an elbow.” needs to consider this: constant pain is tremendously fatiguing. It’s one thing to battle through pain for one climb, but something entirely different to endure significant pain for several hours. It simply wears on you and saps your energy and motivation. When riders get up from a crash and go charging up a climb, the body releases a lot of adrenaline that helps to mask the pain. But that’s a temporary solution, and within 30 minutes you’ll start to feel a lot more of that pain. And when there’s a significant portion of your focus directed at pain that won’t go away, it’s nearly impossible to perform at your best. 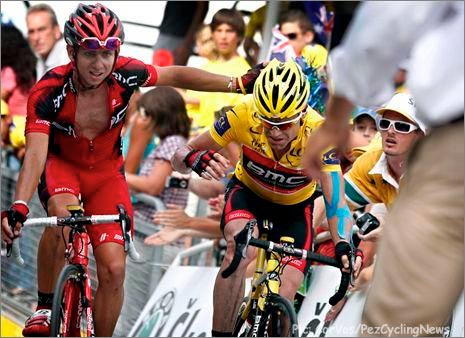 In the first week of the Tour de France, Garmin-Transitions rider Tyler Farrar suffered a small fracture in his wrist. He continued in the race, but finished 22 minutes behind on Stage 3. It was remarkable that he made it through that day, considering that was the stage that featured cobblestones, but he at least was fortunate that he didn’t have to worry about defending the yellow jersey. As race leader, Evans couldn’t sit back and ride conservatively today in an effort to let his elbow heal a bit. He had to be at the front and try to stay with Contador and Schleck.

Knowing now that Cadel Evans made it over the four categorized climbs that preceded the Col de Madeleine with a broken elbow makes his performance today remarkable. Yes, he lost more than 8 minutes and pretty much any hope of winning the 2010 Tour de France, but he honored the yellow jersey on his back by gritting his teeth and pressing on. He’s a quiet guy who is sometimes viewed as lacking in aggressiveness, but after today let no man say he’s not one tough son of a gun.