During yesterday’s final stage of the Tour de Georgia, I talked via phone with PCN’s Eric Van Bockern who was driving the Mavic neutral support car in the race. At one point he interrupted me to exclaim he’d just been cut off by the Navigators’ car – no doubt driven by Ed Beamon, eagerly looking to improve his guys gc placings… 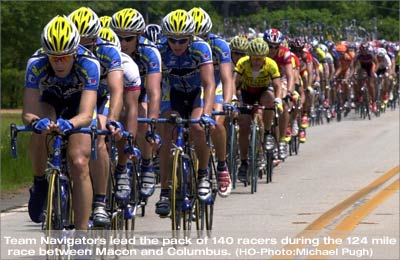 The 2003 Tour of Georgia came to a conclusion today with the 88-mile (144Km) stage 4 Atlanta circuit race. Under bright, sunny skies and an 83-degree temperature, the large crowds were treated to an exciting final stage of racing. The 9-mile circuit wound its way through Atlanta’s downtown area with the start/finish line adjacent to the Centennial Olympic Park, the epicenter of the 1996 Olympic Games.

The Navigators team’s strategy for today would be fairly simple; go for a stage win, since Jeff Louder was 1:44 off the pace and unlikely to improve upon that deficit due to the flat terrain. Another of the many variables in the race would be the combination of time bonuses and points for the sprint leader’s jersey. It was mathematically possible for Fred Rodriguez (Vini Calderola-Sidermec) to take the race lead from Chris Horner (Saturn) by winning the bonus sprints as well as the race. 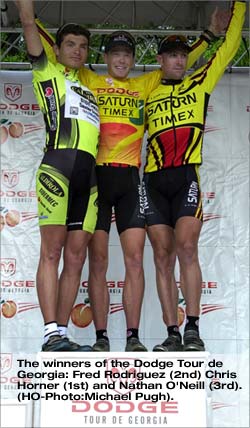 Fred was able to win the first 2 of the 3 bonus sprints, it appeared that his plans for the overall victory were well within his grasp. Unfortunately for him, the Saturn team let a group of 6 low-placed riders gain an advantage of 1-minute on the peloton. Up the road were Jacob Erker and Pete Knudsen (both Schroeder
Iron), Tim Larkin (Ofoto), Adham Sbeih (Sierra Nevada), Steve Larson (Webcor) and Marten Den Bakker (Rabobank). For the next several laps, the gap to the leaders hovered at about 1-minute, so the 3rd and final bonus sprint would be wasted. With one-and-a-half laps remaining, it was the teams of the sprinters that began to bring the gap down, and the breakaways back into fold.

The speed increased dramatically on the final lap in preparation for the field sprint. At the line, it was David Clinger (Prime Alliance) taking the photo finish ahead of Rodriguez and Moreno DiBiase (Formaggi Pinzolo). Rodriguez’ bonus sprints moved him into 2nd on the overall classification, ahead of Nathan O’Neill (Saturn). For the Navigators squad, it was a week of mixed results for 610-miles of racing over 6 days; a stage victory, a 3rd place stage finish and 3 days of wearing the Yellow Jersey of race leader. Missing, was a top placing in the overall classification.

Homeboy: Rambling To The Deaf