Roadside Report: For Ed’s first day roadside at last year’s Tour he went straight to where it all happens – the finishline to get all the latest. Tired cyclists, happy cyclists, angry directors and hungry for news journos, the finishline is always an interesting mix of riders, teamstaff, family, girlfriends and hangers on.

Stories about Tour stages usually finish with the winner crossing the line – but we’re going to start this one at that point. PEZ was on hand right after Marcel Kittel (Argos & Germany) again got the better of ex-world road champion, Mark Cavendish (QuickStep & GB) in Tours. 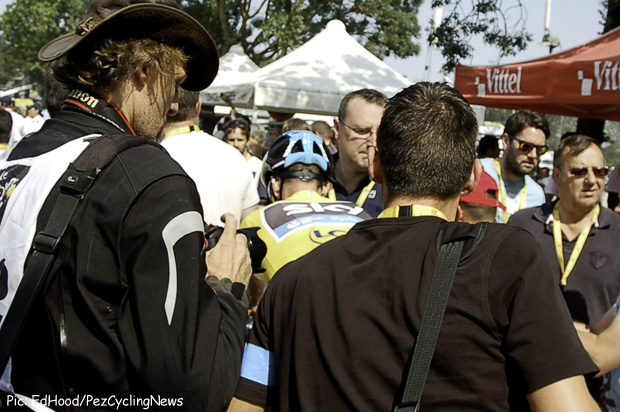 It was another day at the office for maillot jaune Chris Froome (Sky & GB), with no time gained or lost. But Sky had to be on the alert in the closing stages with a big crash coming inside two kilometres to go; just as well they had their man in the first 20 on the road. Sky’s PR man, former rider, Dario Cioni was right on hand after the finish to guide the slim man from Nairobi to the podium. 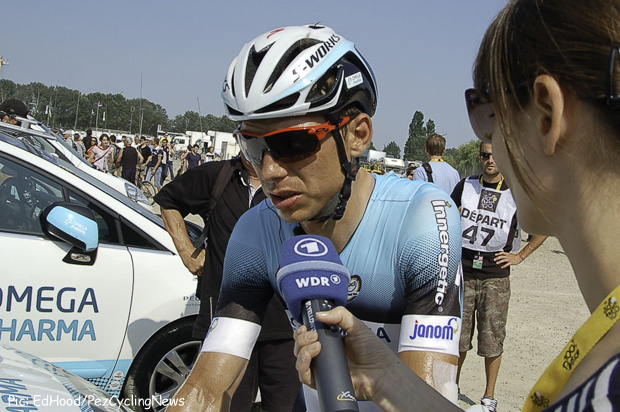 Yesterday Tony Martin (QuickStep & Germany) was king of the hill – if it’s not too blasé to refer to Mont-Saint-Michel as a ‘hill.’ Today he cut a weary figure as he tried to get back to the bus and a shower; those 33 kilometres on 58 x 11 yesterday still in his legs, not to mention fruitless hard labour for Cav, today. But when the microphone was stuck under his nose he’s too much of a pro not to answer the questions. 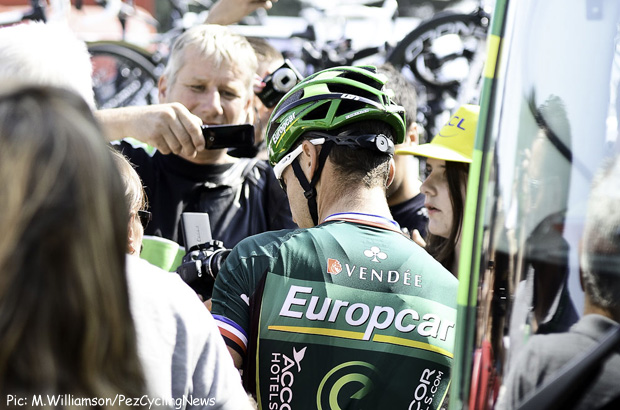 But Tommy Voeckler (Europcar & France) was more than happy to sign autographs and quote the quotes to his adoring fans. Tommy is well down the classement but we’re sure he’s already scheming for Sunday’s Bastille Day torture on the Ventoux. 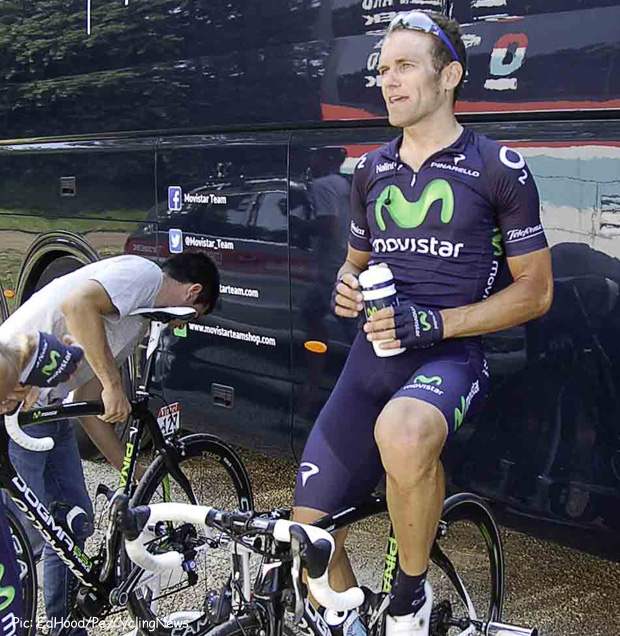 Whilst Sky may claim to have ‘invented’ warming down on the rollers, Rik Van Looy employed the same technique some 50 years ago – ‘The Emperor’ would spin out on his bottom gear for 20 minutes after every training run and race. Over at Movistar their sprinter Jose Rojas was in good spirits as he spun the lactic away. 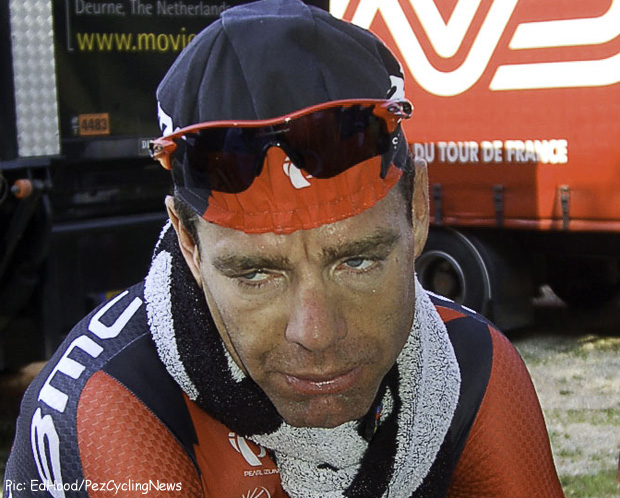 Old ‘Cuddles’ Evans (BMC & Australia) wasn’t looking quite so happy, though – with a six minute plus deficit on Froome he has little to smile about. 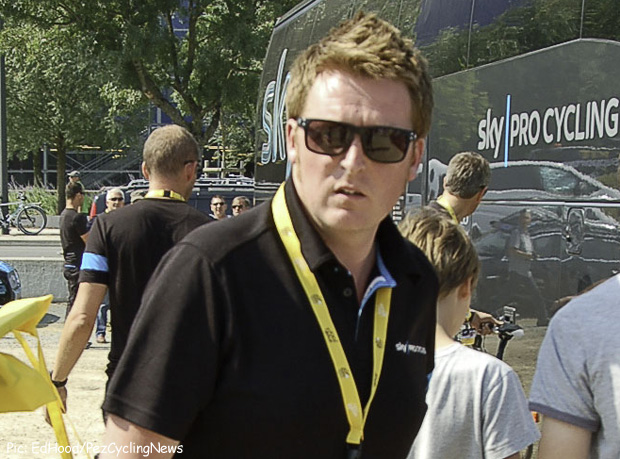 And Sky’s coach Rod Ellingworth was showing the stress too; ‘get more barriers out here, Claudio!’ At least they’ve done away with the screens from 2010. But maybe he’d just heard that Edvald Boasson Hagen has broken his scapula in that nasty last two K crash and joins Vasili Kiryienka in feint writing in the L’Equipe team lists. 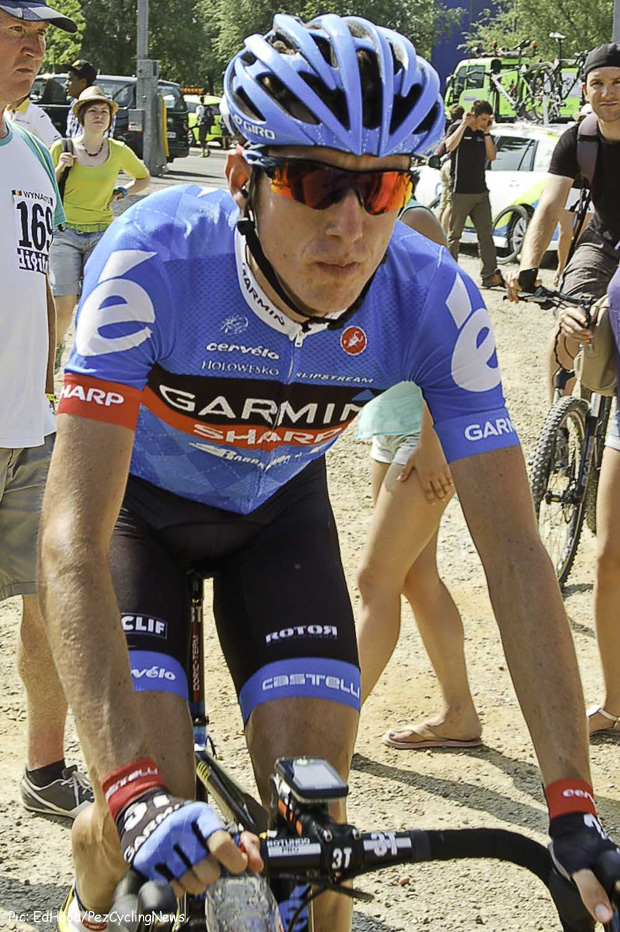 And as the crowd clustered round the QuickStep, Sky and Argos buses, Stage Nine winner Dan Martin (Garmin & Ireland) slipped quietly through the crowd towards the Garmin bus. The time trial didn’t go Martin’s way, yesterday but with more mountains to follow and less scope for the 58 x 11 in the next chrono, it’s conceivable he could share the view from the podium in Paris. 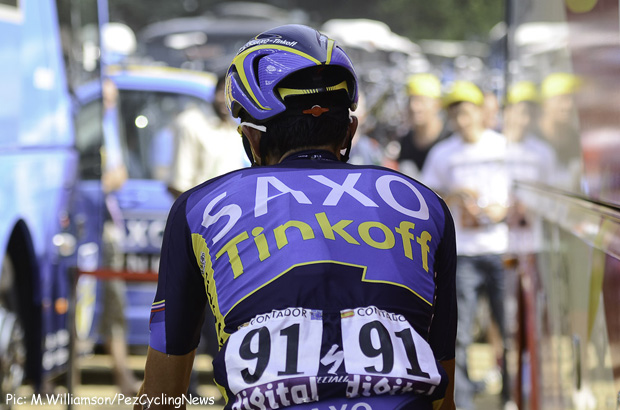 Alberto Contador (Saxo-Tinkoff & Spain) was even more anonymous, sneaking in between the buses to miss the microphones and the same old questions. Alberto used to be a ‘chrono king’ but dropped two minutes to Froome yesterday – that said it would be wrong to write him off. Whatever you may think of Saxo-Tinkoff head man Bjarne Riis, he’s a tactical wizard and whilst it looks like Froome is the winner, we’ve not heard the end of Contador in this Tour. 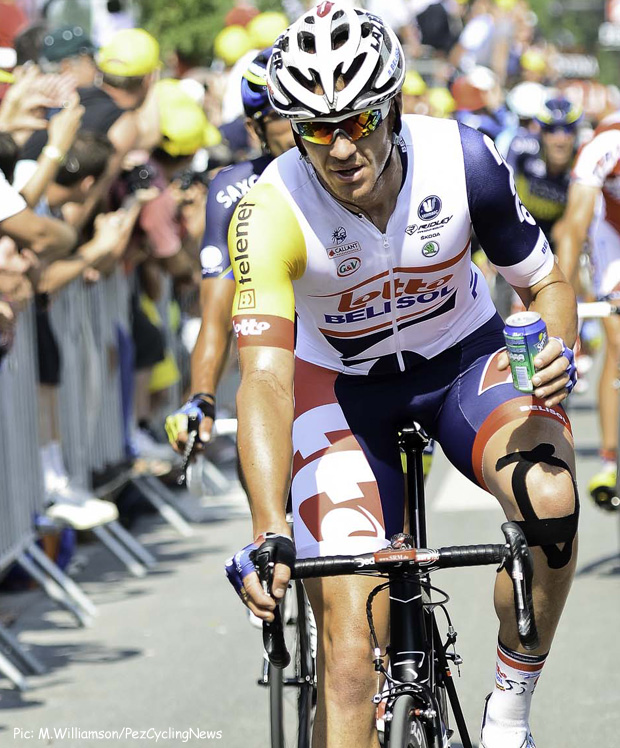 For some the needs are simpler – Giro stage winner, big Adam Hansen (Lotto & Australia) didn’t even wait ‘til he stopped to grab his can of fizzy drink. Hansen is one of the few riders who revel in riding all three of the Grand Tour each year – but maybe now wouldn’t be a good time to ask him about the Vuelta? 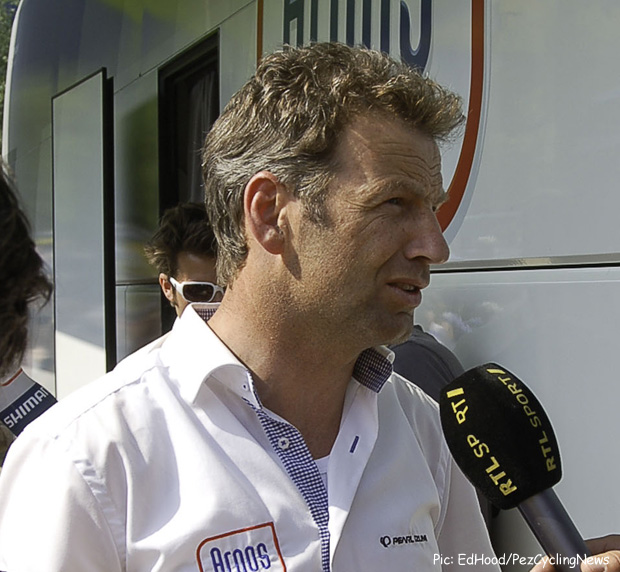 Meanwhile, the interviews go on, and on. There are the happy interviews – Argos boss and former Netherlands elite road champion, Rudi Kemna chatted easily through his. His big German sprinter, Marcel Kittel had just won his third stage of the race – beating Cav fair and square – to make it a fabulous Tour de France for Argos-Shimano. 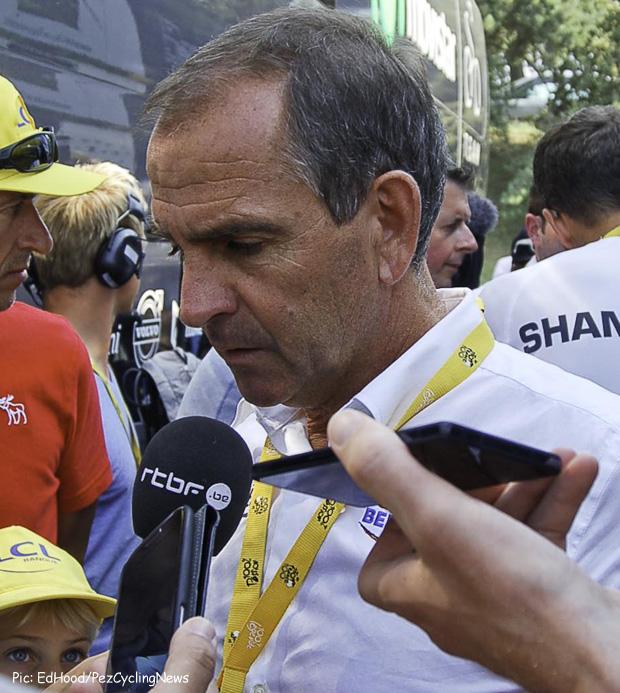 But then, on the other side of the coin there are the not so happy interviews. Over at Lotto, former Belgian professional road champion, Marc Sergeant was having to explain to the ever-rabid Belgian media how it felt to see his sprinter – the other German flyer, Andrei Greipel – beaten again and to have his top ‘locomotive’ Marcel Sieberg scraped off the tar. 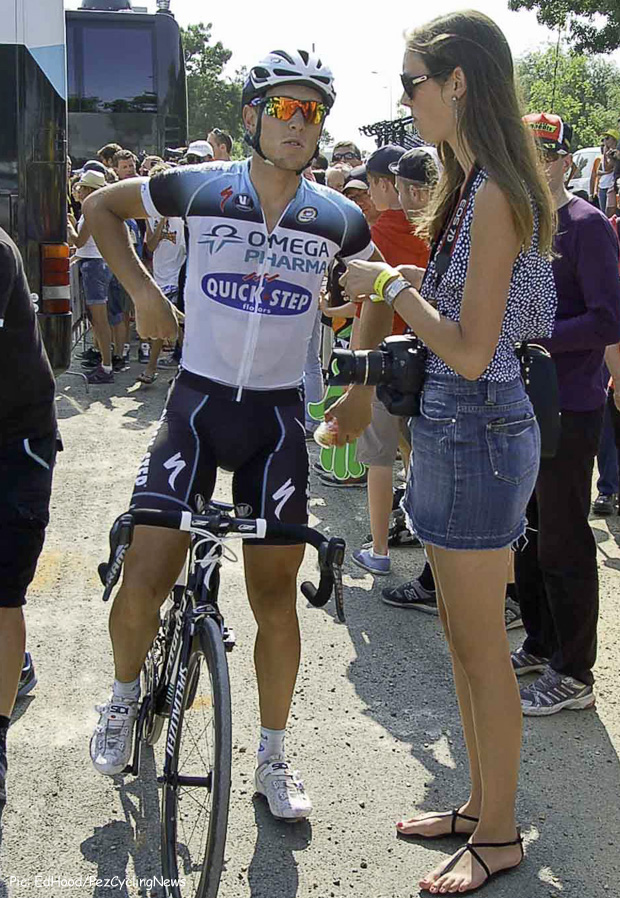 If the team hotel is close to the stage finish then some riders choose to ride back to the digs – it loosens the legs and lets the mind calm down. Matteo Trentin did, but had time to say ‘hello’ to his lady before he pedalled off. 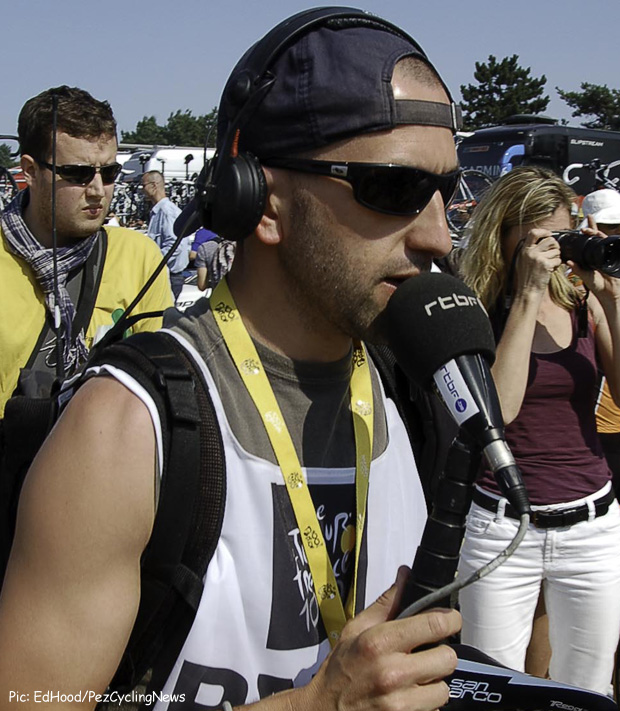 There’s no easy pedal for the radio mic guy, though. He needs victims and scurries around the bus park like something out of a science fiction movie in search of those crucial sound bites. 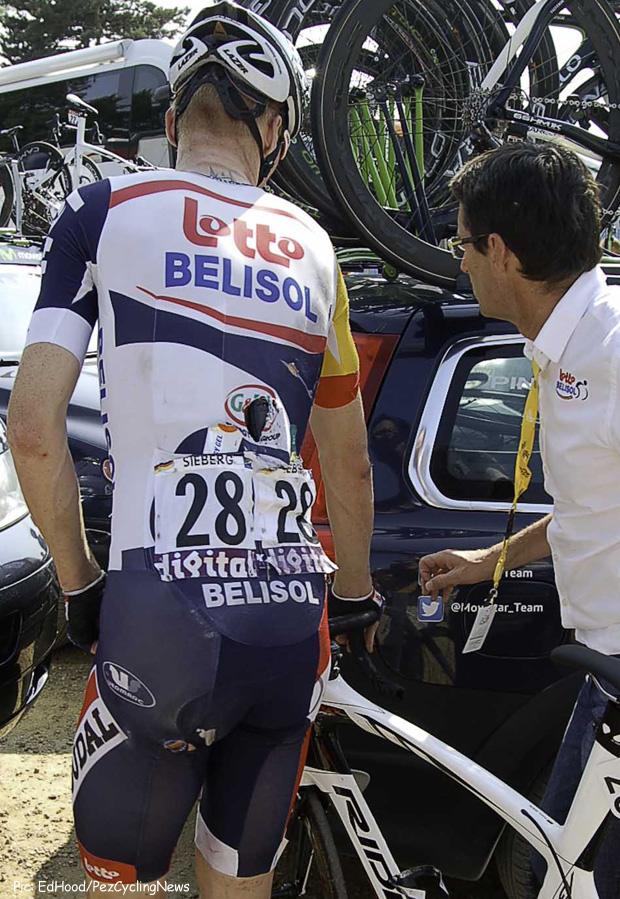 Meanwhile, the aforementioned Herr Sieberg arrives with shorts and jersey written off and a sore looking wound where his radio was forced into his spine – first stop the team doctor. 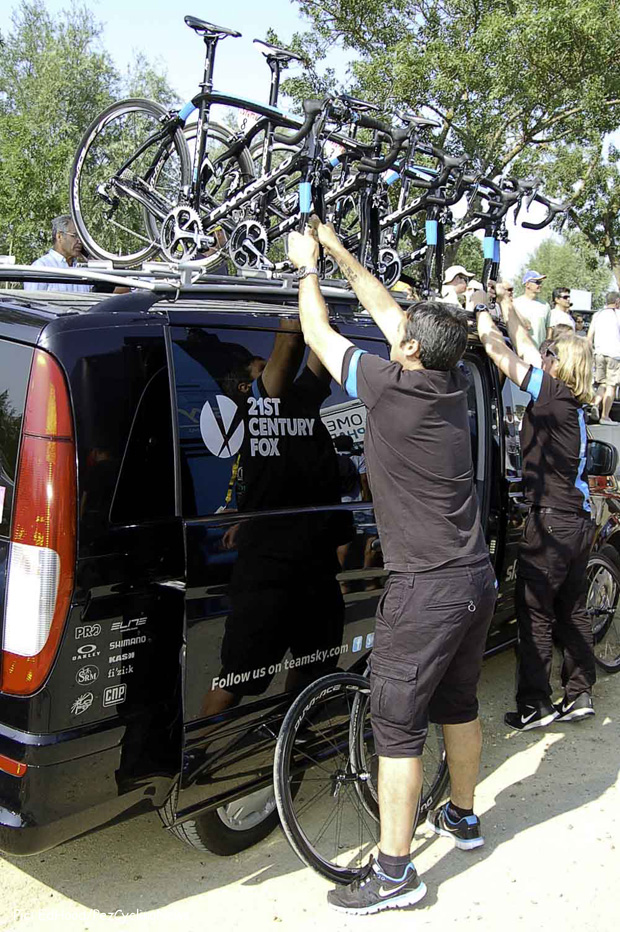 For the mechanics the grind starts all over again, bikes on the roof, back to the hotel, wash them, check the tyre, brake blocks, cables . . . 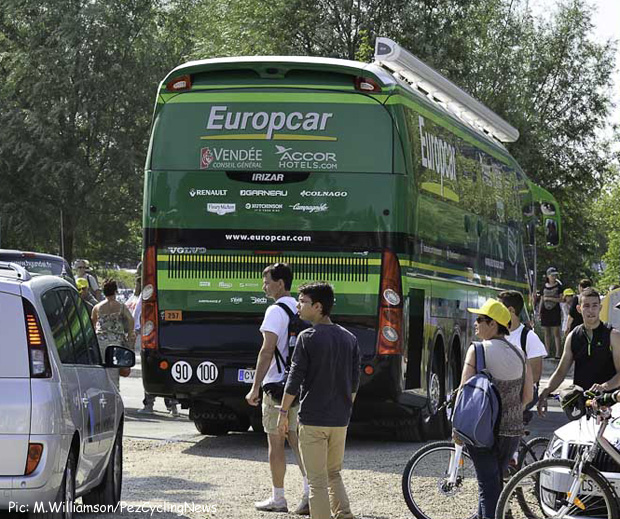 The bus drivers too have a job to do, skilfully nudging the behemoths out of the dusty car park to get the boys back to the hotel and the massage table as soon as possible. And yes, we did give the GreenEdge bus a wide berth, before you ask. 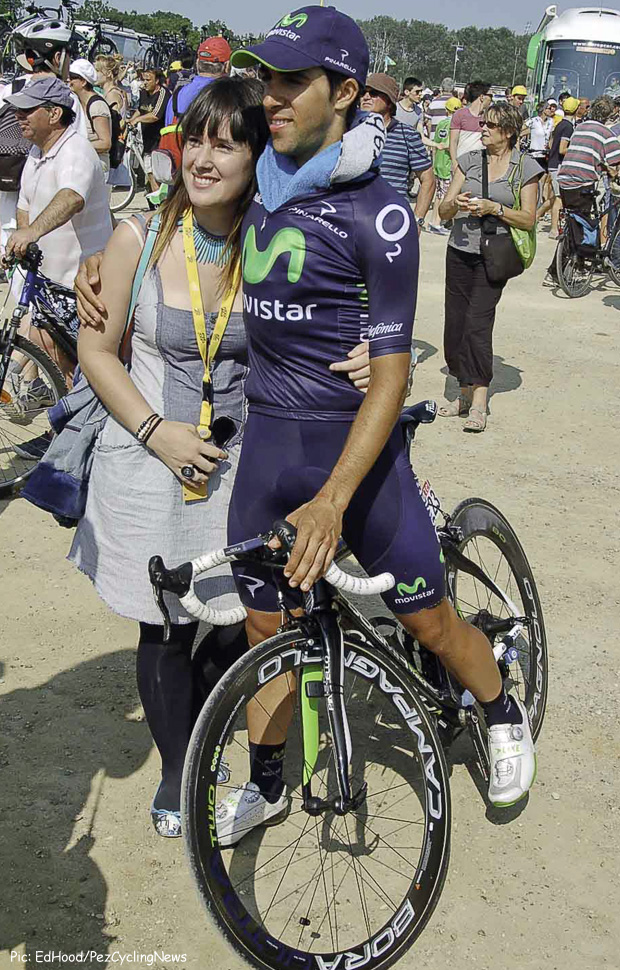 It’s not all work and grief though; Movistar chrono man Jonathan Castroviejo – he was 10th yesterday – had his lady on hand for a cuddle and photo opportunity before he headed for the bus. And if that’s not enough to make him smile, Movistar now have three in top ten – Valverde, Quintana and Costa. 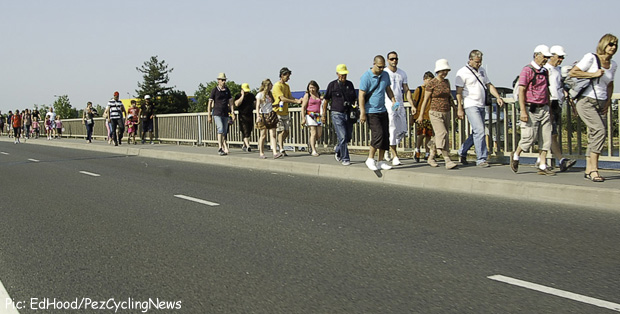 Eventually even the diehard fans have to go home – there’s only so many times you can walk round that bus park. But they’ll all be back tomorrow at the start of those 173 K from Tours to Saint-Amand-Montrond. We certainly will!

Thanks for reading and and keep it tuned to PEZ throughout this year’s Tour as Gord takes us through the first week roadside before the Pez himself takes over and finally Ed to bring us home in the last week.

Tatyana Antoshina takes all the gold at the Russian road championships