Tour de Pez: Before We Get Started

Roadside St.13: The PEZ Roadside Crew picked up today’s 13th stage before it even got rolling – at la village depart in Tours for the 173 kilometres ‘sprinter stage’ from France’s ancient Roman capital to Saint-Armand-Montrond. There’s a whole cast of characters working behind the scenes to get the show to the stage – we met just a few of them… 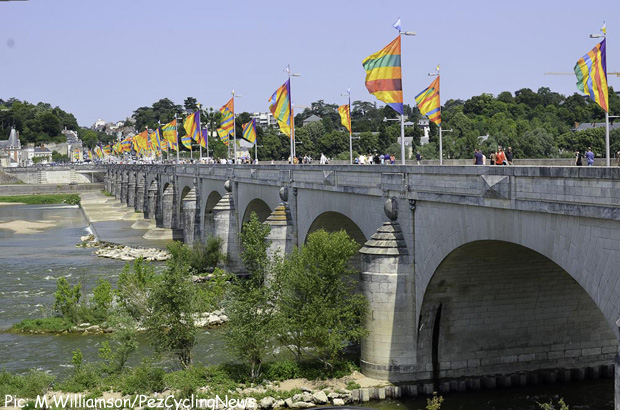 The buses were parked just up from banks of the River Loire, which along with the River Cher make Tours a city of water, light and history. 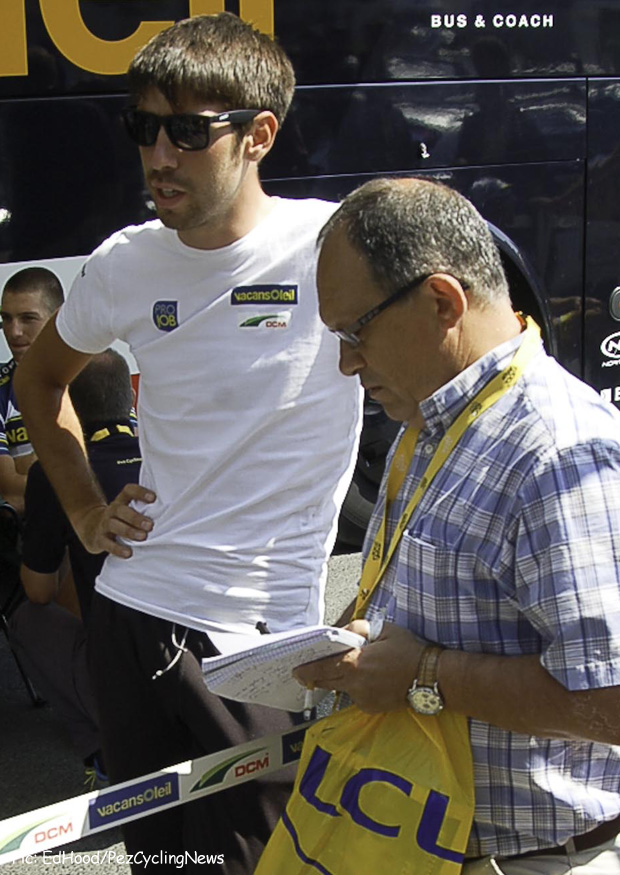 ‘But enough of the waxing lyrical’ I hear you say – what about the bike race ? We worked the finish yesterday, so it was only right to work the start, today.

The lead bus in the queue was Vacansoleil with Thomas De Gendt looking like a member of a Seattle grunge band for his interview. De Gendt wasn’t at his best at the start of le Tour but a fine third in the Mont-San-Michel time trial announced that he’ll have an exploit planned somewhere between here and Paris.

Remember that this is the man who catapulted himself onto the Giro podium with a stunning lone win on the Stelvio in 2012. And check out the journo; he’s not dialed into that ‘politically correct’ stuff and a cigarette dangles from his fingers – c’est France ! 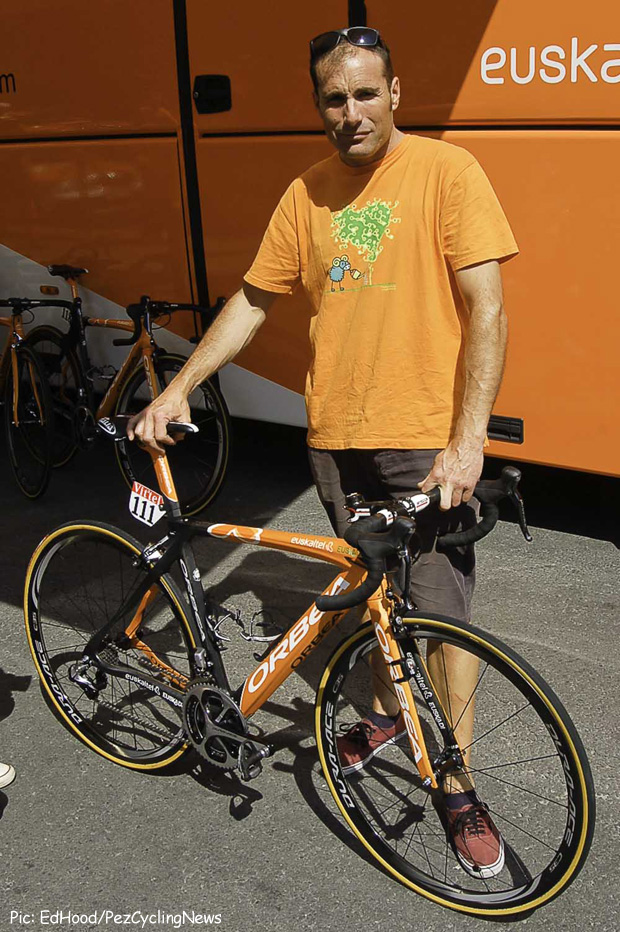 Euskaltel leader Igor Anton rides the new Orbea Orca frame with cable routing adaptable to manual or electronic shifting, new colours and new forks – but the drop outs must carry those crazy tabs to prevent the front wheel slipping straight out when you undo the front quick release.

As Tomas, the head spanner man says; ‘we used to prefer front wheel punctures – but not now, we can change a rear faster !’ 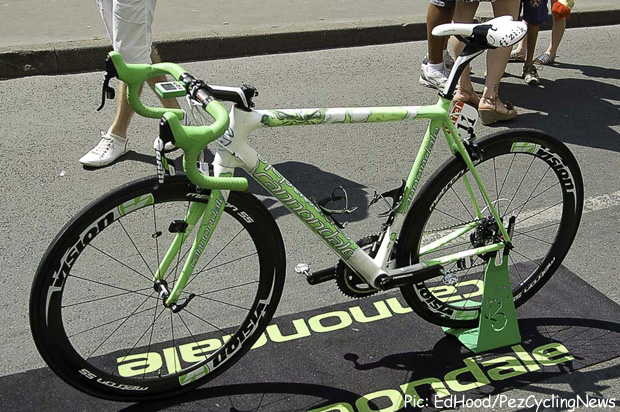 Selling things is a big part of what the race is about – and bicycles are one of the main commodities up for sale. Whilst many of the teams have the bikes squirreled away out of sight, Cannondale have Sagan’s Synapse displayed proudly out on a stand with the “Hulk” air brush job looking great. That’s how you sell things – display them and make them look desirable. 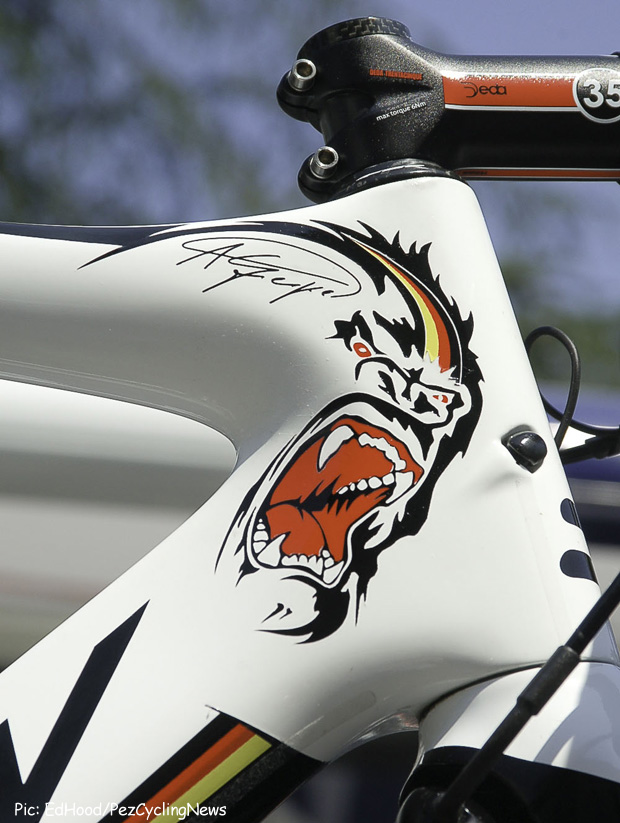 And we couldn’t resist Ridley’s air brush work on le Gorille’s machine. Greipel has one stage win to his credit this year, but like Cav is suffering from countryman, Marcel Kittel’s towering sprint form. 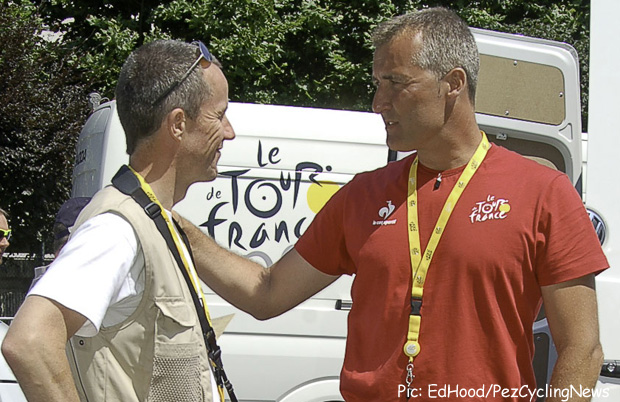 Riders, journos, bikes – and you need officials. Not all of them are ‘janitors’ – take Jean-Michel Mourin, one of three motor bike mounted Directors.

He was Olympic team pursuit champion in 1996; back in those heady days when France ruled the boards – he’s helpful, good humoured and always happy to chat. He’s also the man to approach for the vital ‘steekerr’ you need to have on the windscreen to follow a coureur in a time trial. 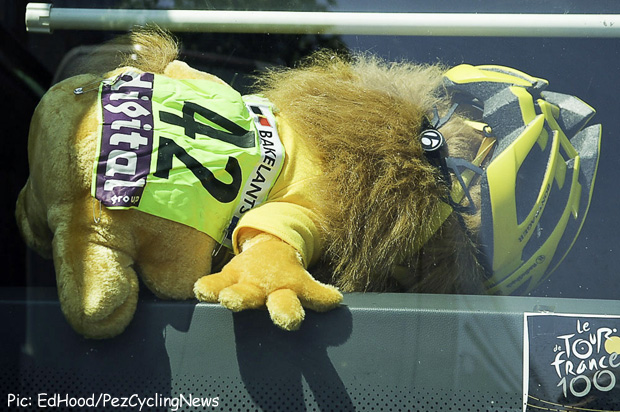 On The Shack bus dashboard there are two Credit Lyonnais yellow jersey holder’s cuddly lions to celebrate Jan Bakelants’ two days en jaune. But one has fallen over – perhaps his name is Andy ? 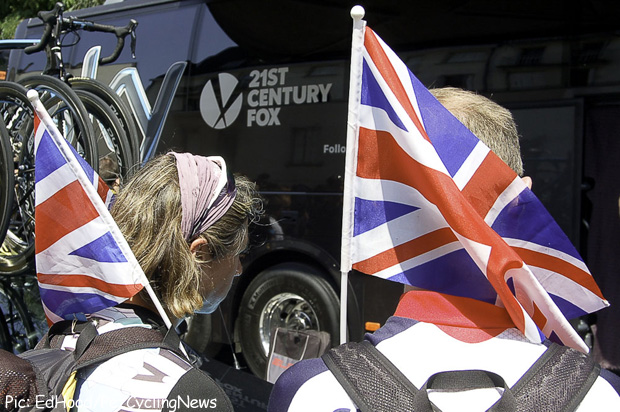 And you have to have fans – up at the Sky bus the faithful gathered, hoping for a glimpse of Christopher. ‘Which stage are you most worried about?’ we asked Dario Cioni, former Italian elite time trial champion and now Sky PR man.

‘Every stage is dangerous,’ came the reply – and he’s right; they lost Edvald Boasson Hagen yesterday after a crash in the finale of what should have been, ‘another day at the office’ kind of a stage.

[And today would be another torrid one for Sky with QuickStep splitting the peloton and then Saxo launching a late ambush to distance Froome. ed] 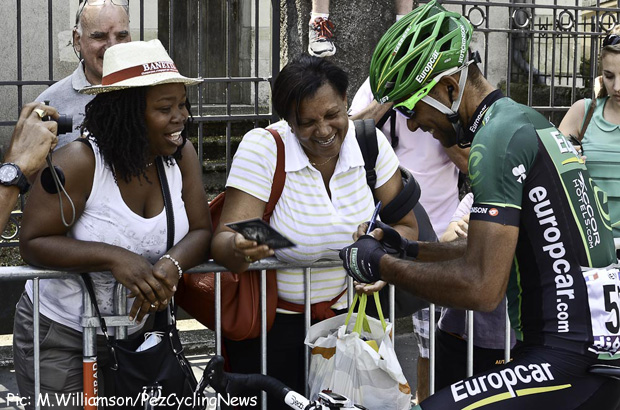 Autographs are a ‘must’ for the fans and Europcar’s Yohann Gene was happy to break his journey to the start line to oblige. 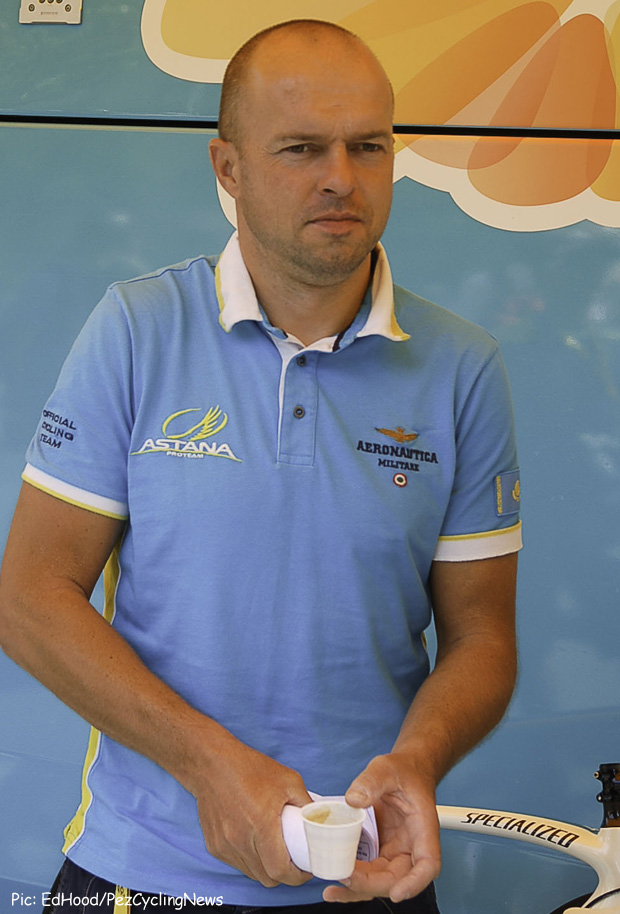 And the Tour always has plenty of faces which make you think; ‘I know that guy !’ Across at Astana it was former sprint demon Jaan Kirsipuu who caught the eye – now on management with the Kazakh squad, he looks slimmer now than he ever did as a Tour rider; a race in which he wore the yellow jersey. 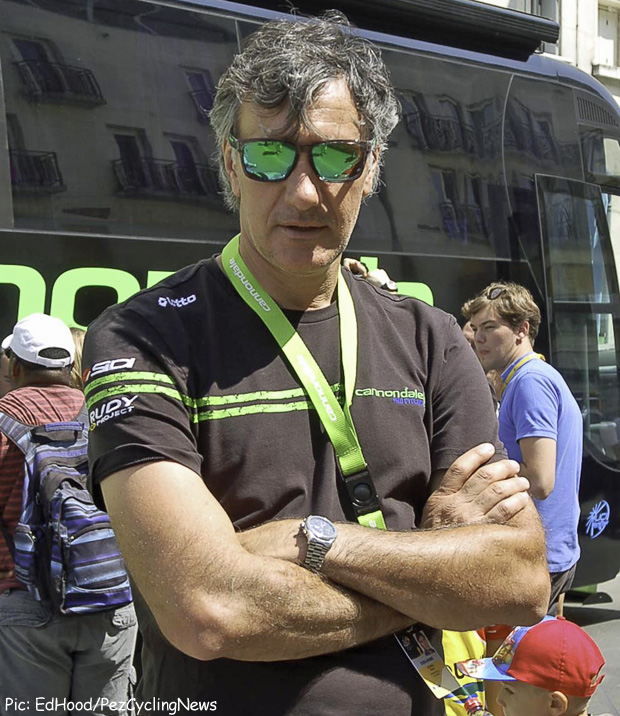 And on the subject of fast men, Mario Scirea is on the management with Cannondale these days but was one of the best lead out men, ever. He was Super Mario Cipollini’s main man, capable of sustaining 60 kph for kilometre after kilometre before he handed over to the like of Giovanni Lombardi for the coup de grace. 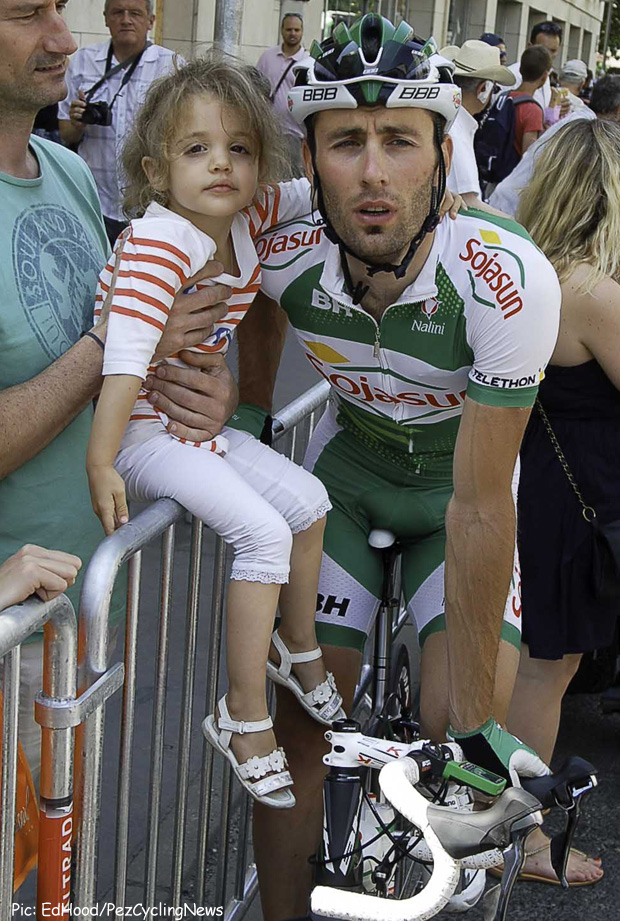 Kids! Le Tour wouldn’t be the same without them; Sojasun’s Jonathan Hivert had to find time for cuddles before the roll out. 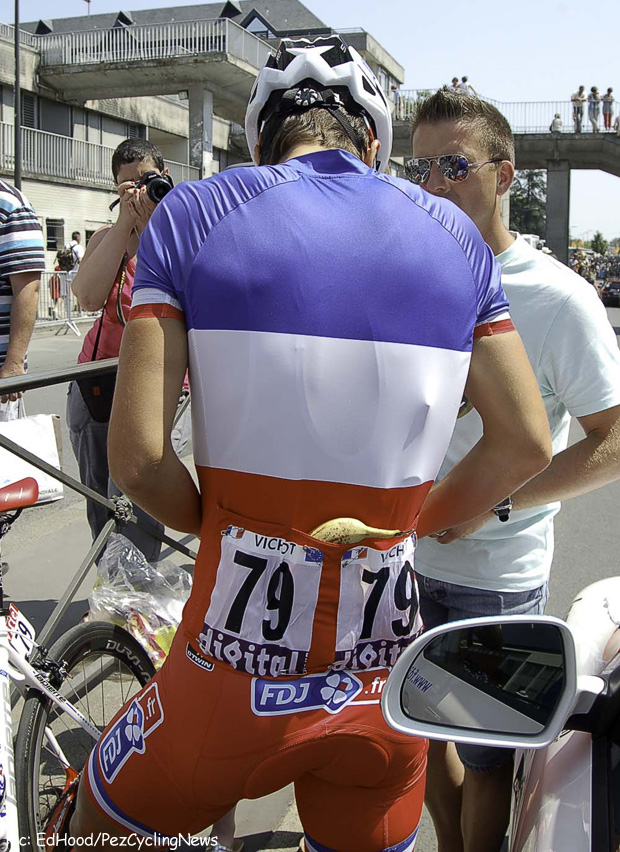 And for all that fancy nutrition we hear about for les coureurs, French Elite Champion Arthur Vichot (FDJ) still sticks with a good old banana. 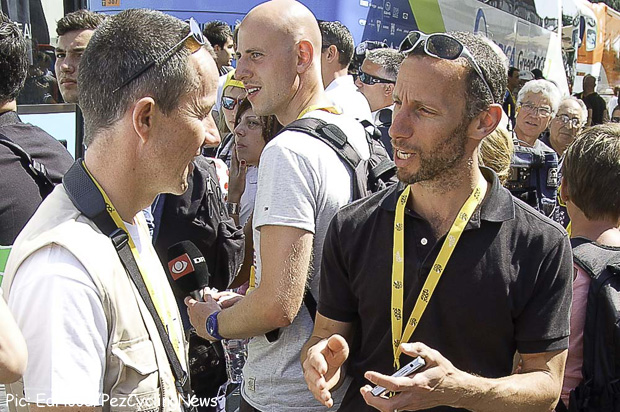 With the market for English language cycling books never better, there are authors aplenty on le Tour. ‘Are you Ed Hood ?’ says the voice – it’s Ed Pickering, author of ‘The Race Against Time’ his account of the Chris Boardman v. Graeme Obree feud, back in the 90’s. I helped Ed with a few quotes for the book. 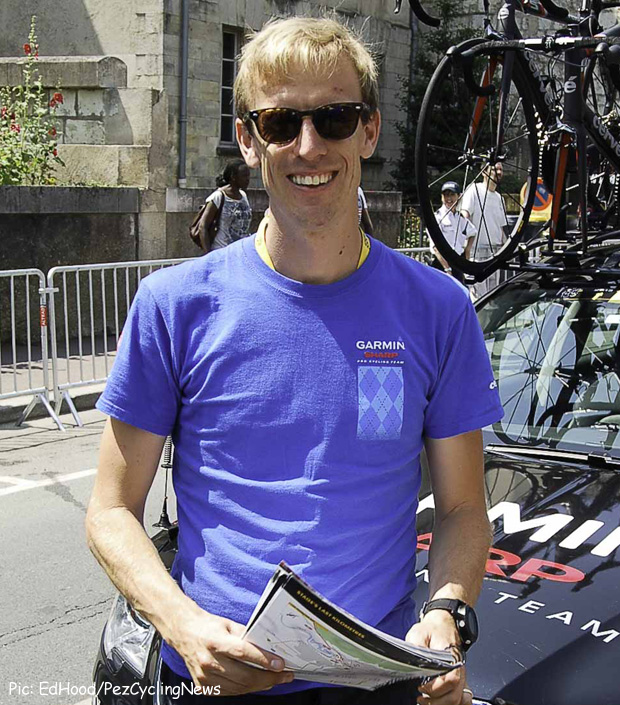 And ex-Liquigas, Lotto and United HealthCare pro Charly Wegelius is in on the act with his autobiography, ‘Domestique’. The ever laid back Charly is DS with Garmin now and is credited with master minding the Stage Nine ‘ambush’ from which his Dan Martin emerged triumphant, and where Richie Porte tumbled down the standings leaving Froome dangerously exposed. 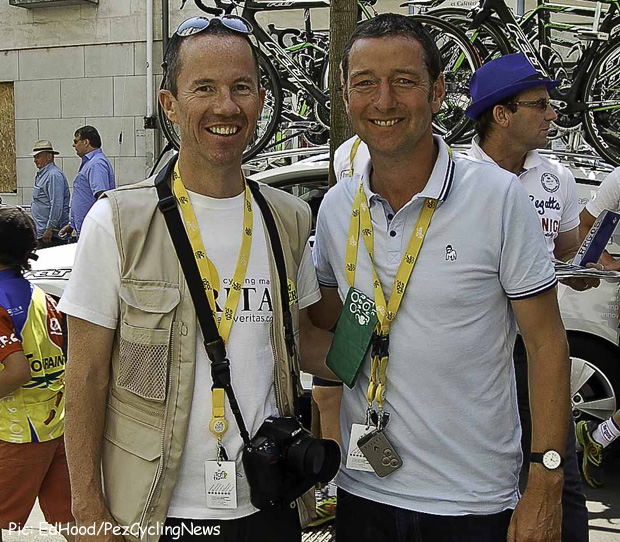 And British TV anchor man, Ned Boulting was on hand, too – but with time for word with PEZ. 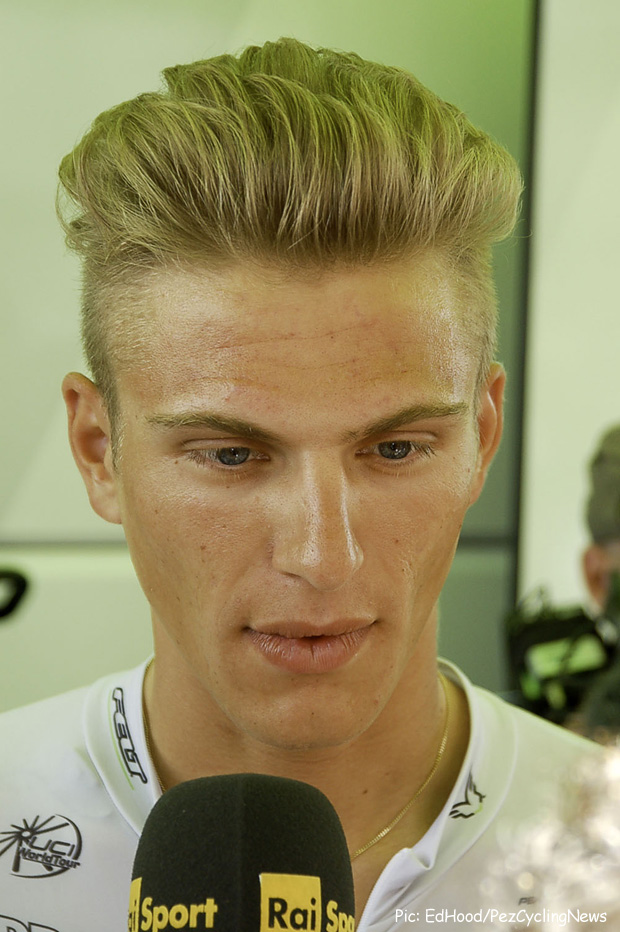 But we thought we’d best spend extra time around the Argos bus – they’re the team of the moment.

‘Dolf Lundgren’ aka Marcel Kittel has taken three stages for the Dutch team whose budget is a fraction of the likes of Sky and BMC but who punch well above their weight and rack up the wins. Marcel was out of the bus and happy to chat from below that extravagant coiffeur – and it’s conceivable he could make it four wins, today. 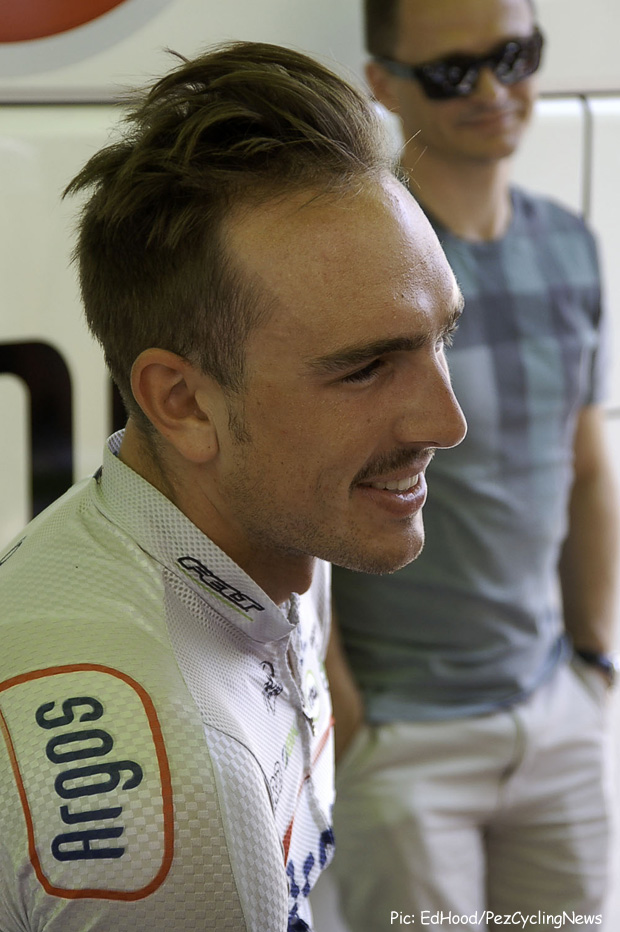 John Degenkolb took out five stages in the Vuelta, last year, one in the Giro back in the spring and is an integral part of Kittel’s train – but is also the man for when gravity gets a bit too much for Dolf – sorry, Marcel. Watch for him on Saturday.

And whilst Degenkolb’s hair isn’t as spectacular as Kittel’s, he was one of the trendsetters in the peloton’s disturbing move towards facial hair . . . 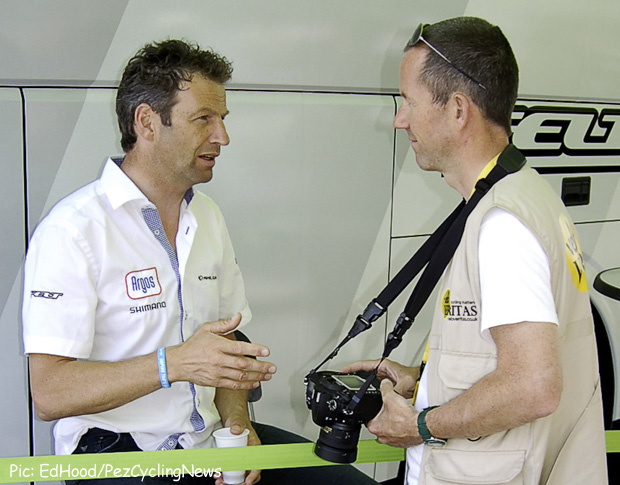 The man behind both of these German fastmen is former Netherlands Elite Road Race Champion, Rudi Kemna (we interviewed him a few years back). He was at pains to emphasise that it wasn’t just about Kittel and Degenkolb; it was about the whole team; and a successful sprint train was something which they’ve had as a ‘work in progress’ for five or six years, since the team was known as Skil-Shimano and Kenny van Hummel was their big finisher. 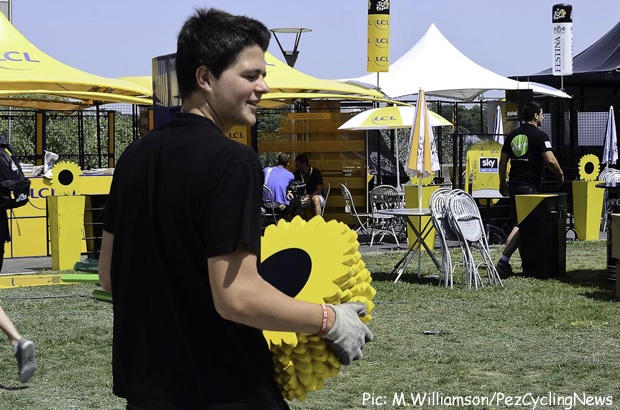 And within minutes of the roll out, the crews are breaking things down to head for tomorrow’s stage start; Saint-Pourcain-Sur-Sickle for the 191 K charge over six categorised climbs to Lyon. It could be a tasty one – and we’ll be driving it.

Thanks for reading and tune in tomorrow for Ed & Martin’s driver’s seat view of the parcours from Saint-Pourcain-Sur-Sickle to Lyon, and read more PEZ more on the PEZ Facebook page and the PEZ Twitter page.