Roadside St.14: With the numerous hills en route and the GC boys saving themselves for the beastly day that is tomorrow to Ventoux, today’s stage had breakaway written all over it. With that in mind Ed took to the road to capture the action of the break and to soak up the atmosphere of the simply huge crowds on the first day of the summer holidays in France. 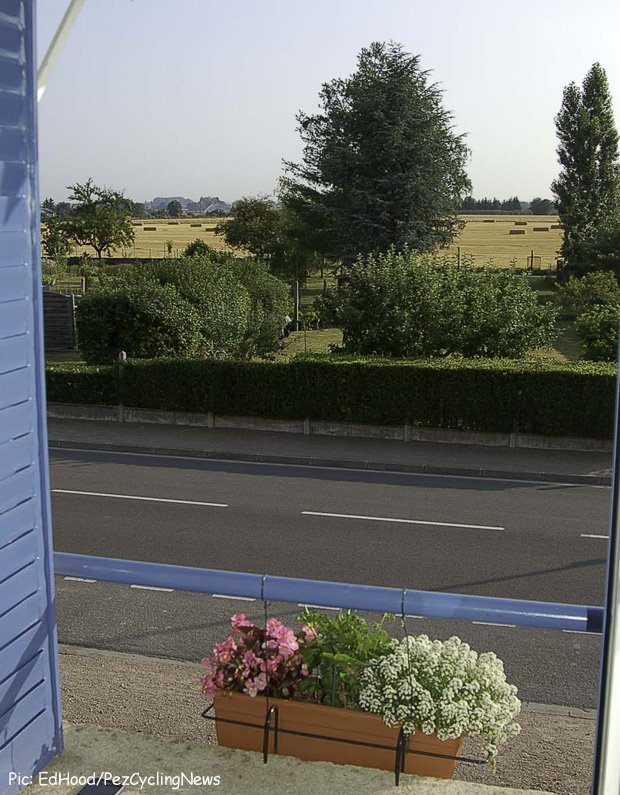 In the morning the sunshine and bird song filled the room when we opened the shutters – glorious. The start village in Saint-Pourcain-Sur-Sioule was strangely subdued, albeit the start line crowd was huge and vocal. 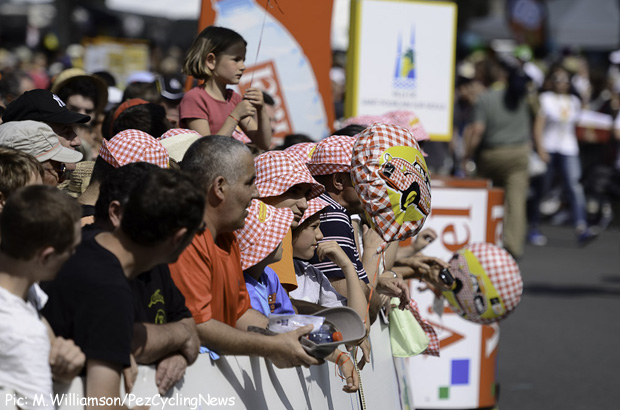 The whole Lance Armstrong affair obviously hasn’t affected the desire of French folks to come out and watch Le Tour. 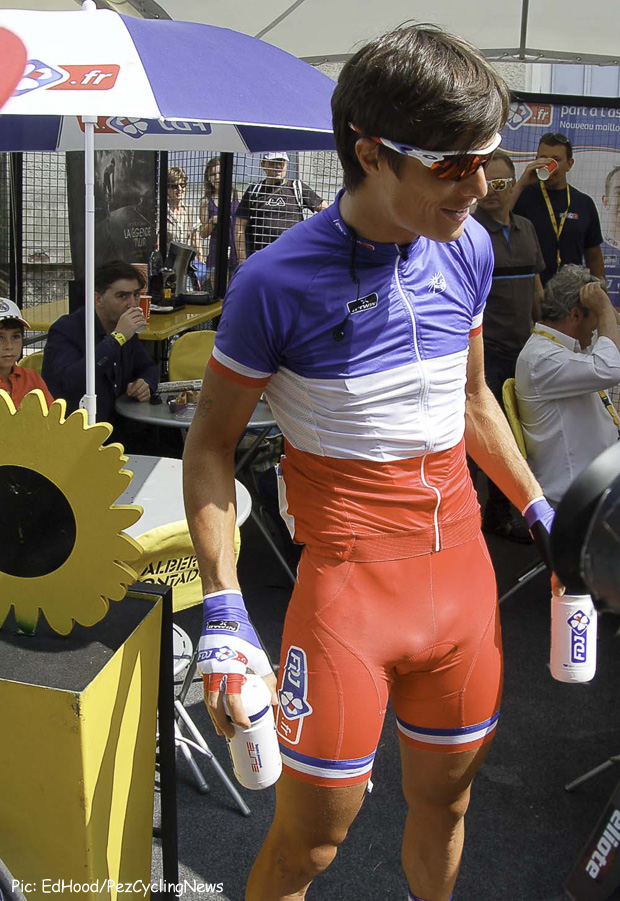 French champion Arhur Vichot (FDJ) is probably coolest of the young French riders at the moment – them red, white and blue Oakleys just adding the final touch. We decided to drive the stage, today – our first time, this trip. There’s a strong wind whipping across the gently rolling parcours – another ambush day? Maybe. But more likely the break will be allowed to go early – there’s just Coke and Vittel in the fridge these days to aid recuperation . . .

There are seven climbs, today – five fourth cat and two third with six of them crammed in the second half of the stage. And tomorrow is the Ventoux; Froome will be thinking, calculating, hoping he’ll re-establish his superiority there.

But the Spanish and Dutch will be scheming, even as I write this – and if I had to put money on tomorrow’s result it would be Froome to win the stage or, Tommy Voeckler. The Europcar man with the most famous tongue in French cycling hasn’t been hiding in the gruppetto just for fun.

The early parcours are no cake walk, rolling all the time and that wind is strong – the flags dance straight out. We’re 50 K in now and the smell of melting tar fills the car, with patches of what looks like water on the road – but it’s actually the surface turned liquid.

Nasty for tubulars, it means tiny pieces of flint and glass don’t just fly off the rubber, they stick and work their way in. The first climb, it’s not a killer but it drags up over sticky tarmac, not the best with heavy legs. 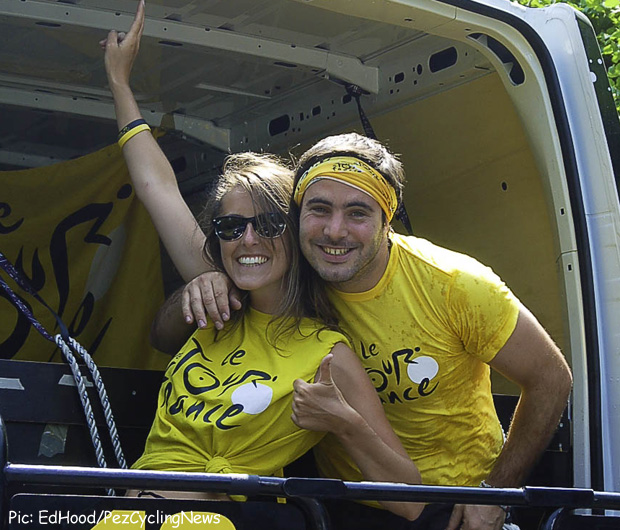 We catch the Tour merchandising vans – strange how only the prettiest girls with the best tans get that gig . . .

Mid-morning beer time and when the locals and bar’s lady proprietor see the creds and camera we just have to have a ‘foto !’ 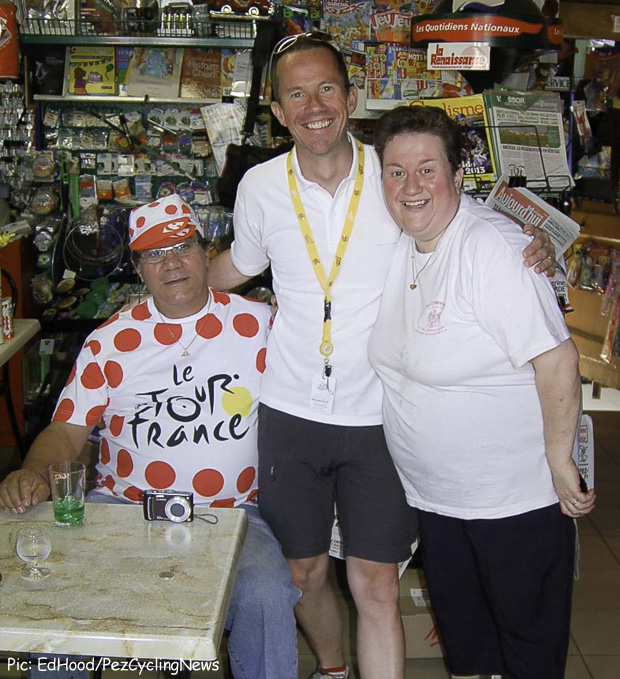 She tells us there used to be plenty of bars around here but she’s the last one. And she’s not happy with the publicity caravan – 20 people, ONE hat thrown out, ha!

Off again and on to the second 4th cat of the day, it winds up through the trees straight after the feed zone; not a killer but no fun if there’s a cat fight up front for points. 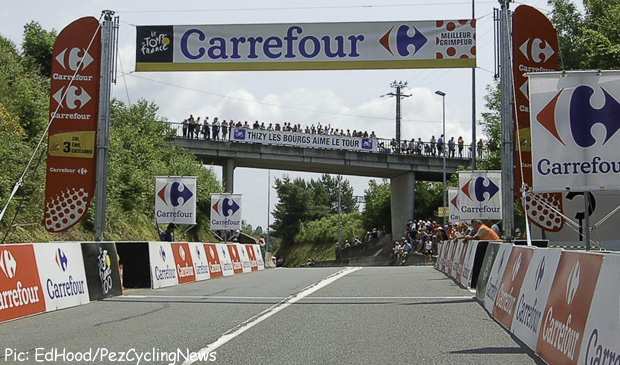 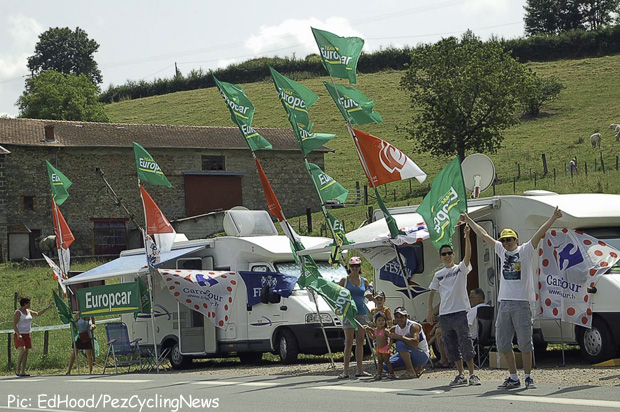 And another third cat follows – the cross wind isn’t getting any less strong. The two mad Brits are here again – with their Skoda re-branded “Va Va Froome” from last year’s “Wiggo.” ‘Is Chris gonna win, guys ?’ 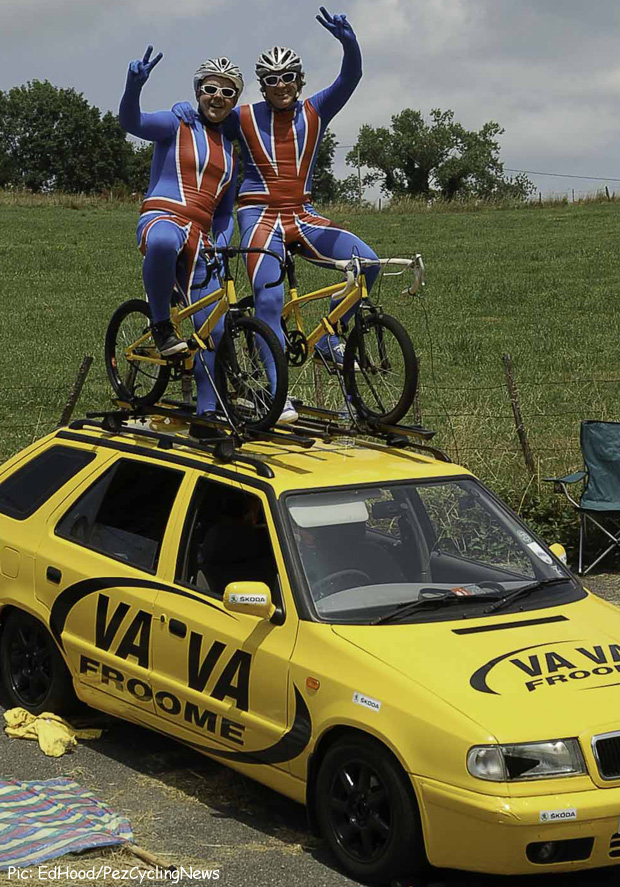 There’s a pause; ‘if he does, he’ll have really deserved it !’ That’s a fair assessment, we’d say. It’s a long, leg sapper – over six K at 4.4% with big crowds and a sore cross wind. Off the top we discover these woods are dangerous – a tiger ! 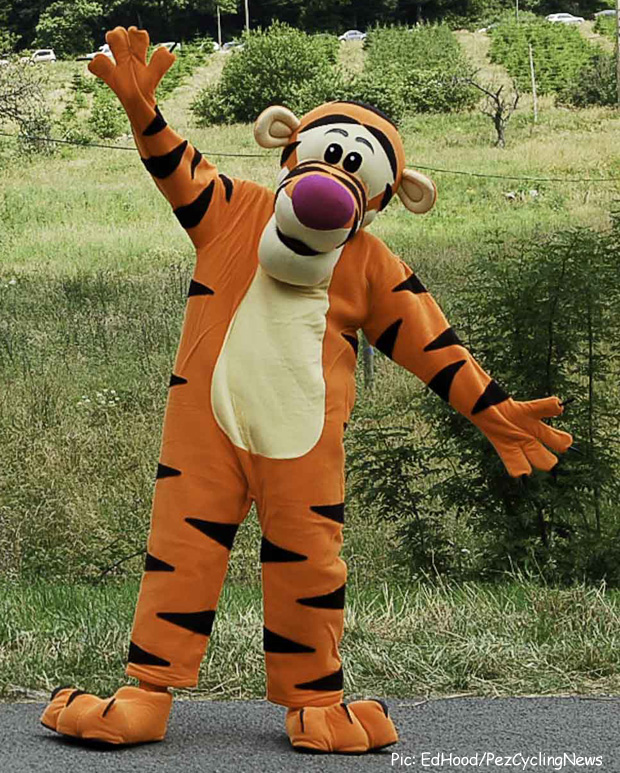 The descent is long – plenty of opportunity for regrouping – but there are still three fourth cats to come in the finale. Dave texts that we have 18 away with 2:35 of a gap: Millar, Talansky, van Garderen, Burghardt, Vichot, Bakelants, Voigt, Trentin, Kadri . . .

The Tour social media truck hurtles past – working that crowd! 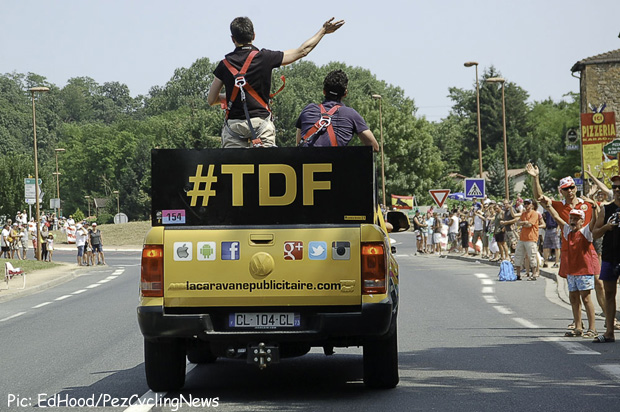 Bak, Gautier, Brutt, Rojas, Albasini, Simon, Geschke, Garcia, Erviti – Dave fills us in on the rest of the break. The crowds are vast on the fifth KOM of the day – Lyon is a big city, 480,000 inhabitants, so no shortage of potential fans.

We’re in Greater Lyon now, uninspired parcours but big, big crowds. The second last fourth cat is a tricky one, if the break is still alive there’ll be frisky boys on that one. The last climb of the day comes and goes – 10 K to go; now it drops to the river – fast and technical.

The last seven or so K are pan flat; we pull the Opel up alongside the river. The proximity of a wayside bar to our parking spot is a pure coincidence. 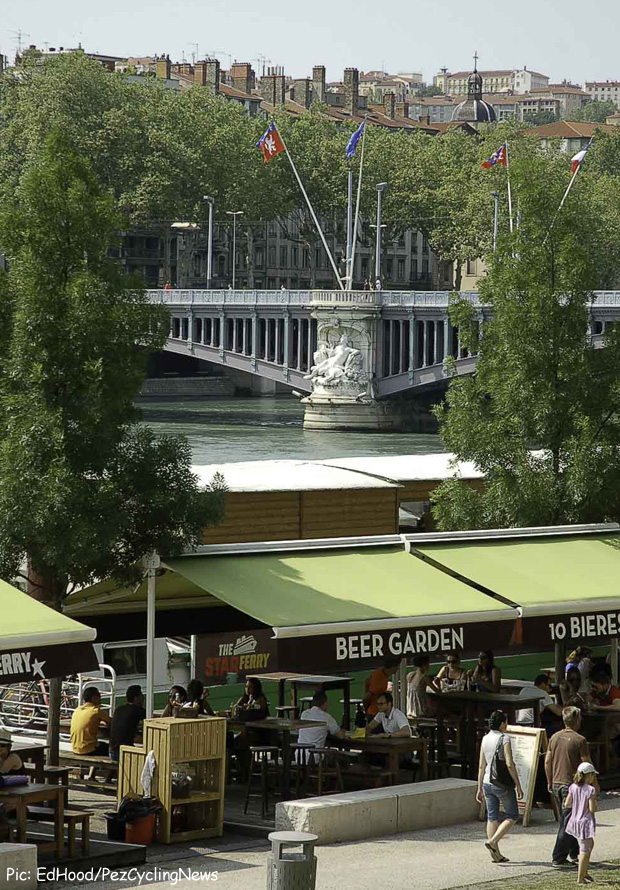 Martin is on the Tour Twitter feed – the break is now more than six minutes clear with less than 25 K to go. Out in ‘No Man’s Land’ between bunch and break, Johnny Hoogerland and Damiano Cunego fry.

The beer is cool, the river views great – Millar and Voigt ‘popped’ comes the update from Dave. It’s a hard one to pick a winner from, Rojas could be fastest in a sprint but his temporary friends will be keen to bid him adieu on one of those fourth cats.

Word is that Julien Simon (Sojasun & France) is on his own with Marcus Burghardt (BMC & Germany) in hot pursuit. 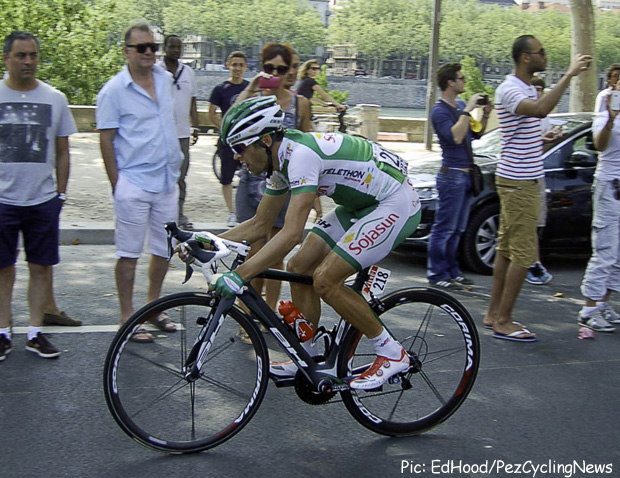 We leave the bar and head for the roadside; there’s not long to wait; Simon is in full flight and riding well – France’s first stage win for the underdog equipe ? Burghardt has an AG2R in tow and the gap is bridgeable with the rest of the escape not too far behind. 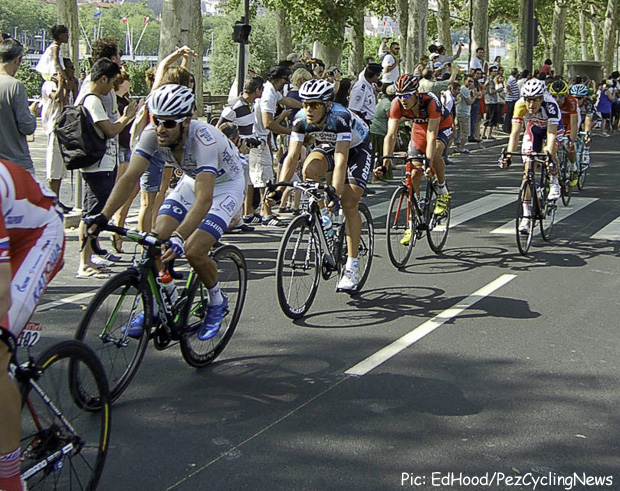 We’d learn by text and Twitter that it did all come together and Trentin (QuickStep & Italy) made it another good day for the Cav Crew, beating Albasini (GreenEdge & Switzerland) on the line. 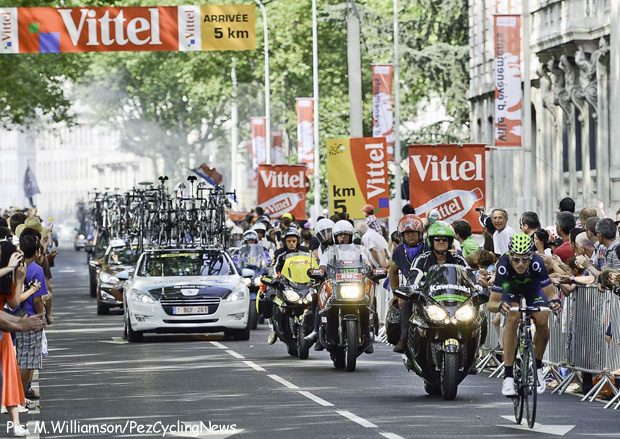 Erviti (Movistar & Spain) got the chop on the final climb – he’d have been valuable help for Rojas at the end if he’d survived. 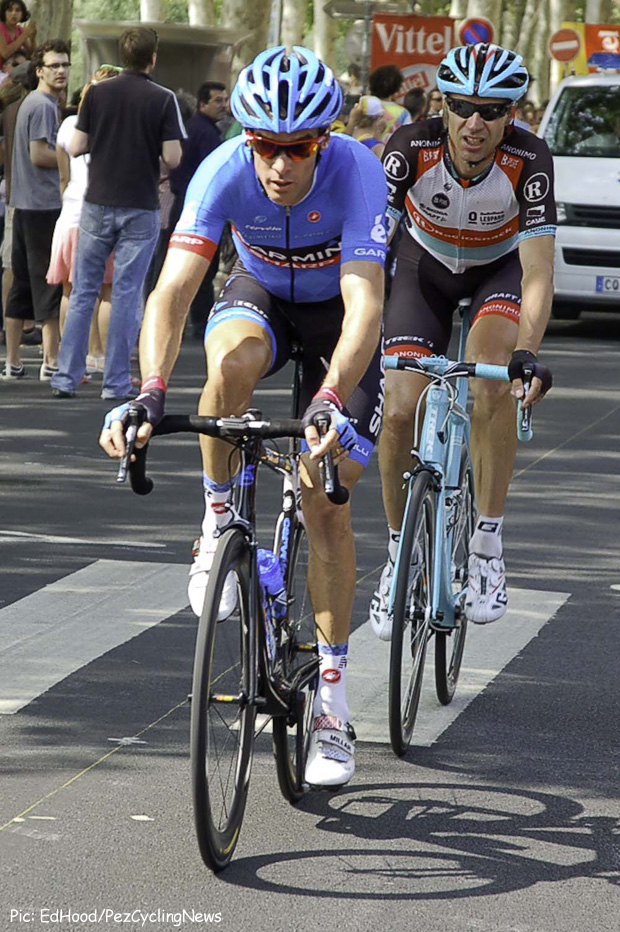 David Millar (Garmin & Scotland) and Jens Voigt (Radio Shack & Germany) had been at the party but had to leave early. 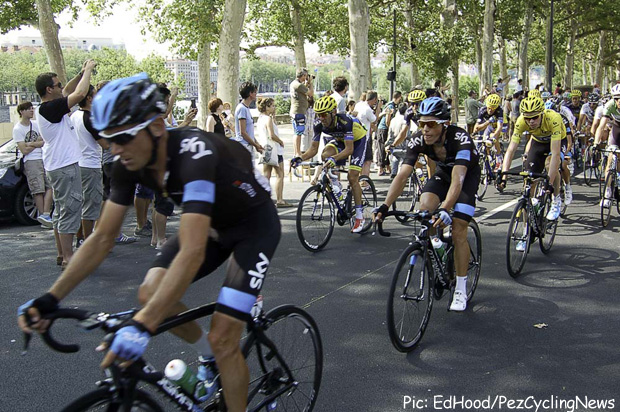 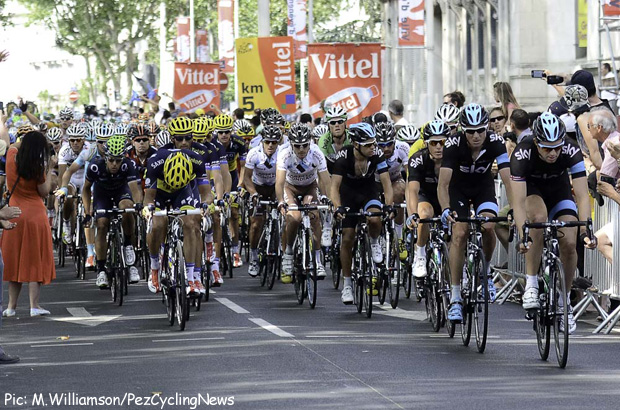 Maillot jaune Christopher Froome and his Sky chums were where they should be at the head of affairs – but tomorrow there’s an exam and it’ll be a tougher day in class. 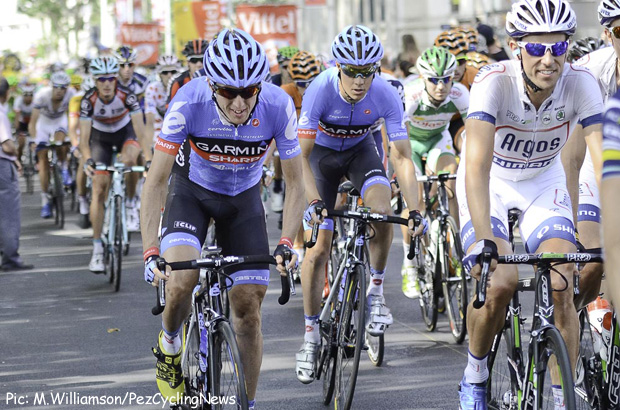 You could tell it hadn’t been a death race by the smiles on the faces – Dan Martin in particular looked like he’d enjoyed the scenery. 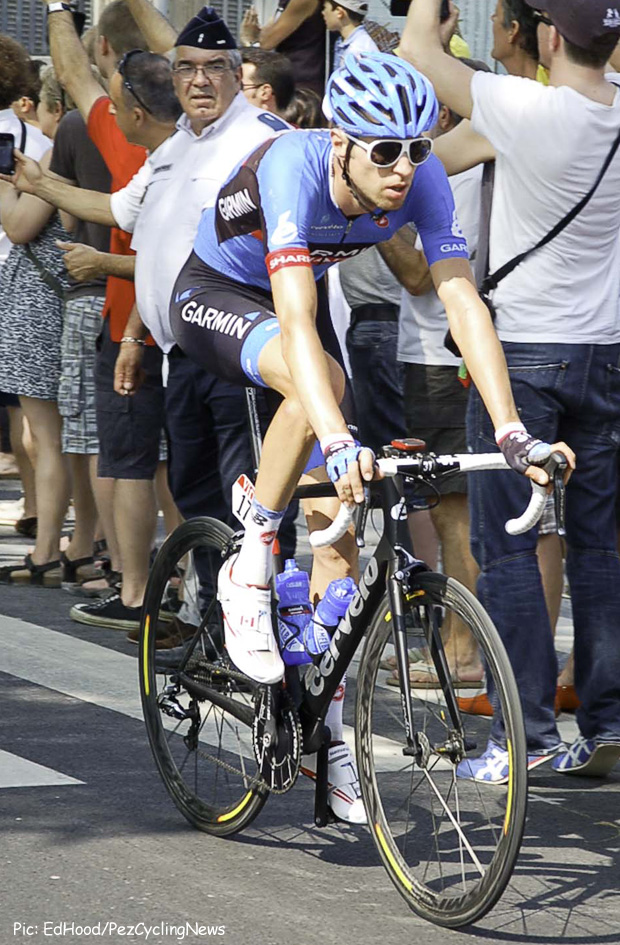 Another tough day for 2012 Giro winner Ryder Hesjedal, though. Or maybe he’s saving his legs for another Charly Wegelius inspired Garmin tactical master class, tomorrow among the lavender fields ? 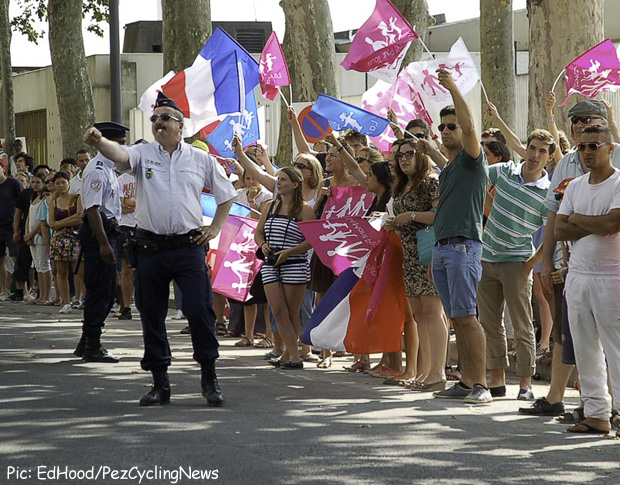 As is usual PEZ practice we jumped in behind the sag wagon for the easiest ride back to the finish – the crowds along the way were massive. Later in the day we heard that there had been 1,000,000 folks road side, today.

Tomorrow there’ll be even more – ‘The Giant of Provence’ on Bastille Day will be something special. Please join us tomorrow on Mont Ventoux, it’ll be memorable.