Tour de PEZ: A Grueling Day In The Alps

Roadside St.19: There was once a British radio comedy show called ‘ITMA’ – ‘It’s That Man Again.’ Today, Movistar’s Portuguese star, Rui Alberto Costa filled the roll. In a carbon copy of his Stage 16 win into Gap, he went in the big break then attacked on the final col, topped it ‘en seule’ bombed the descent and won solo in the grand manner. 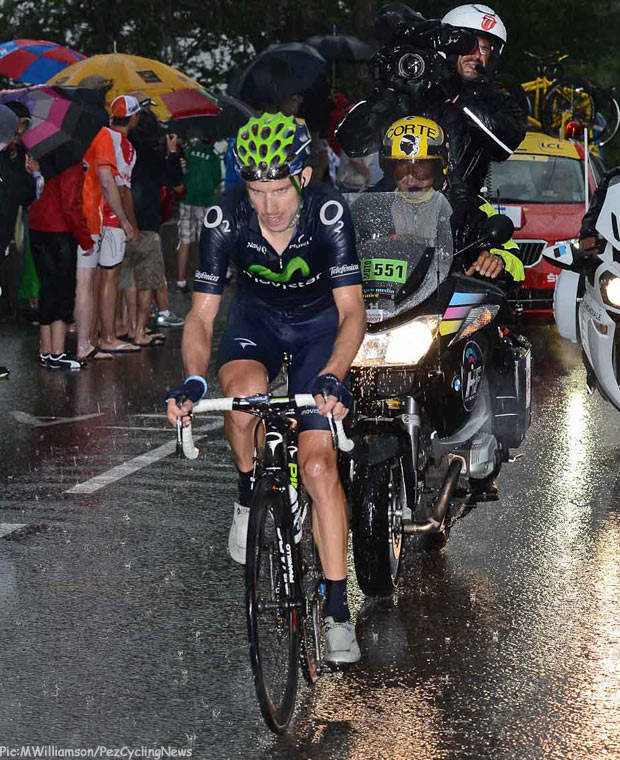 If the style of his win was a copy of Stage 16, the weather certainly wasn’t, a spectacular electrical storm illuminated the Col de Croix Fry with the race passage taking place in virtual monsoon conditions as huge lightning spikes dwarfed the photogs flash guns and thunder made it sound as if the Siege of Stalingrad was taking place in the next valley.

PEZ was right there; soaked to the skin – but first, let’s do the sunny, scenic bit. 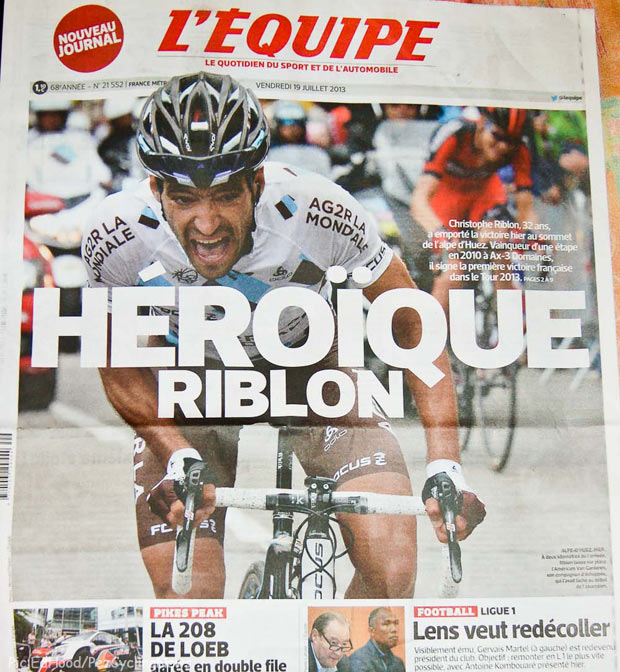 ‘Heroique Riblon’ screams the headline in L’Equipe – we’ll second that. A versatile chap is Christophe, a silver medallist in the Worlds points and madison on the track and in the French time trial champs. This is his second Tour stage win and he joins Hinault and Rolland as the only three Frenchman to win on what is arguably the Tour’s most famous mountain.

It stems back to the days when the Tour organisers used to preview the parcours in a motor car – the categories were assigned according to what gear the old ‘voitures’ (cars) needed to cope with the grade. HC meant you were walking.

The first HC of the day is the 1924 metres Glandon; the beast is 21.6 K @ 5.1% average gradient and kicks off within 20 minutes riding time of the start. Will there be breaks from the gun – or will that L’Alpe d’Huex lactic still be in too many legs?

There’s still snow on the valley walls, in some places the melt water has carved passages through it to form ice caves. It’s a nasty climb; the gradient is far from consistent – tough to find a rhythm on. But the grade does ease as you get higher and there are sections of downhill in there. 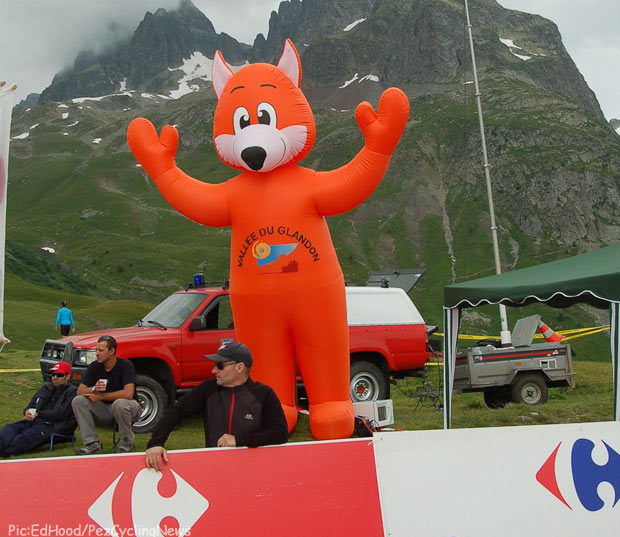 The views from the top are spectacular and some of the mountain creatures have come down to watch the show.

The descent is technical; hairpin follows hairpin. This is the 18th time the Tour has topped the Glandon, the first time being 1947 when Klabinsky was first over. Technical though the descent is, the surface isn’t bad and is ‘readable.’

The valley floor and next stop is the 2000 metre HC Madaleine and it’s a monster – 19.2 K @ 7.9% average. It was first topped by Spanish climbing legend Gandarias in 1969 and this will be the 25th time the Tour has ground over it. Lucien Van Impe and Richard Virenque are joint recordmen on three times first over the top, each. Last year it was Peter Velits who lead the charge.

Coffee stop – the TV shows Ryder and Jon Izaguirre off the front on the Glandon with a three minute advantage. 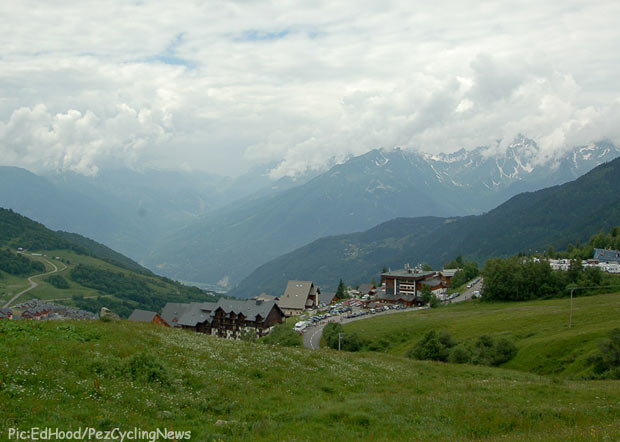 The Madaleine doesn’t mess, it’s nasty, unrelenting but amid beautiful scenery. We climb up past camper vans towards the snow and the crags which sit above the summit. 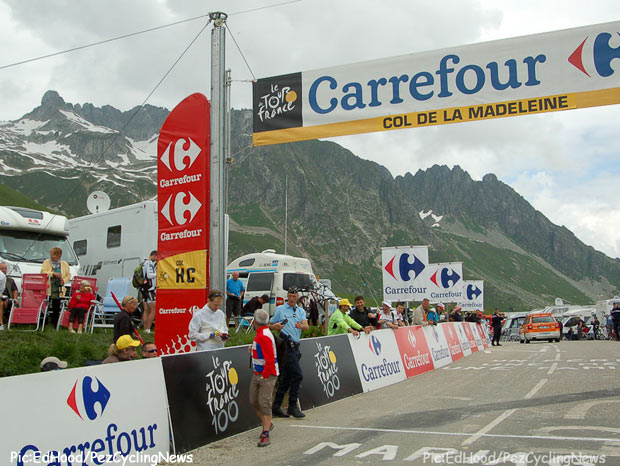 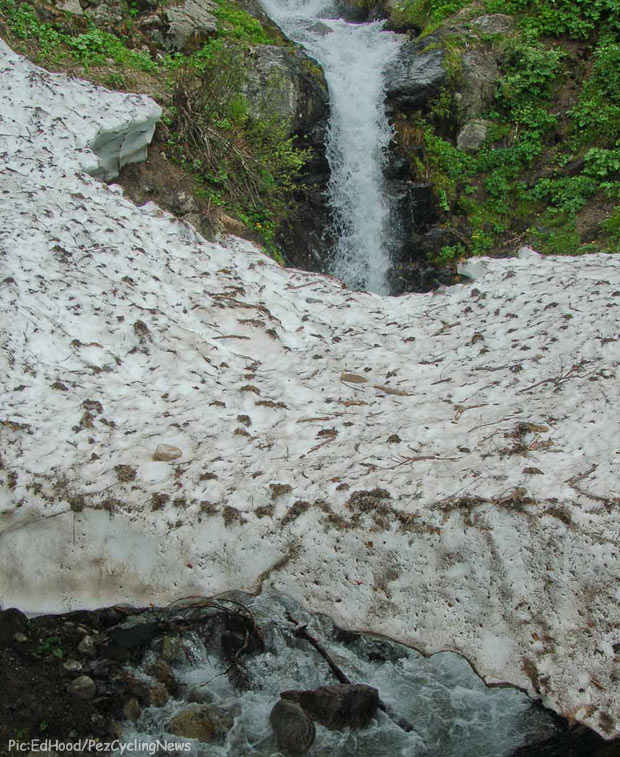 The melt water off the snow cascades down but the last of the snow is reluctant to give in. 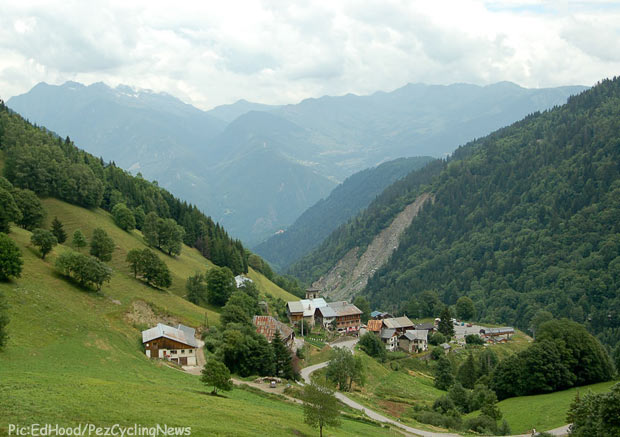 Well manicured little villages snuggle into the valley walls as we drop, drop, drop as the straights get shorter and the hairpins tighter. The descent goes on and on; good news if you’re trying to get back on – but not so hot if you’re of a nervous disposition.

There are plenty of English fans on the course – Cav is always a favourite. He won’t be displaying that famous smile at the end of this stage, though . . . 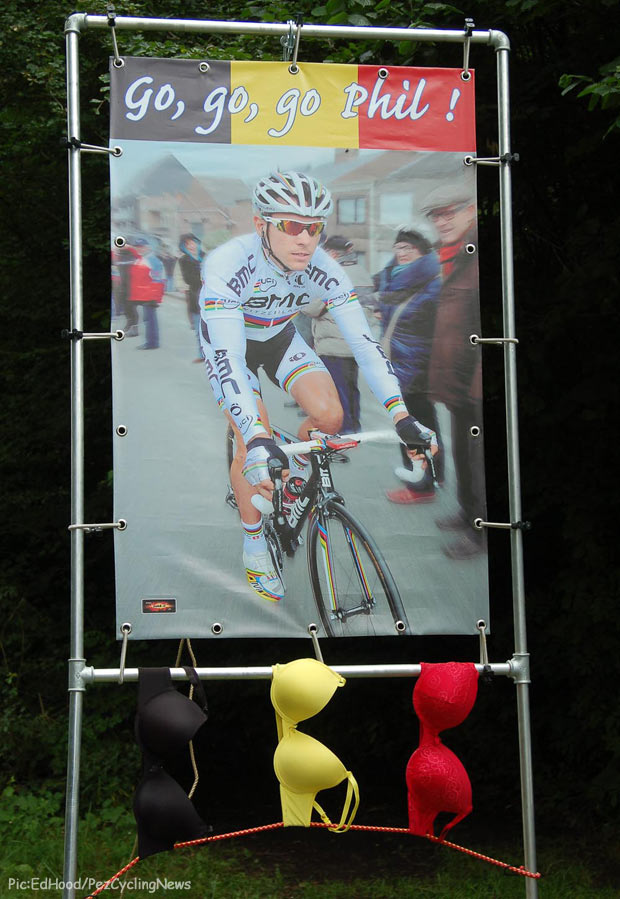 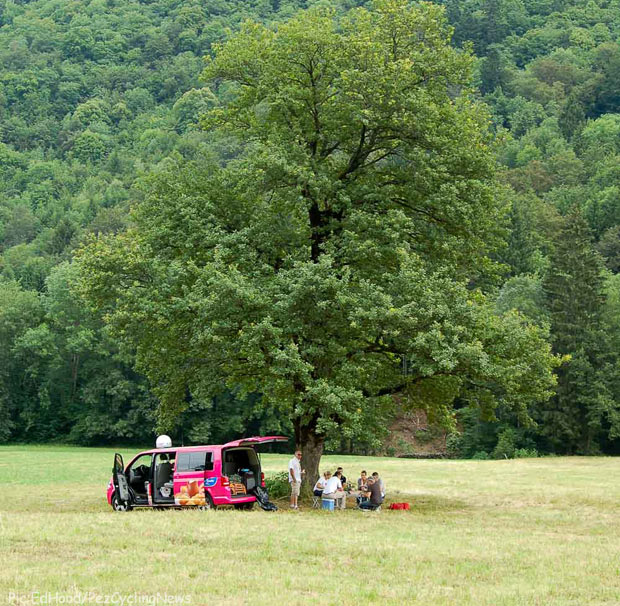 The Belkin Biscuit ViP’s meanwhile have picked a perfect spot for lunch. 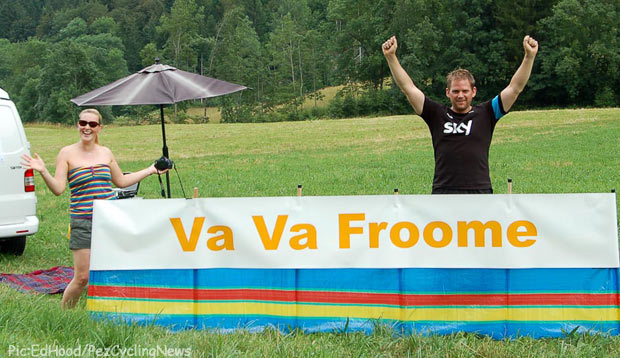 And the va va Froome fans take a wee bit of coaxing to deliver a photo op – but eventually come across.

The descent isn’t too scary and the temp gauge is climbing toward 30 degrees. 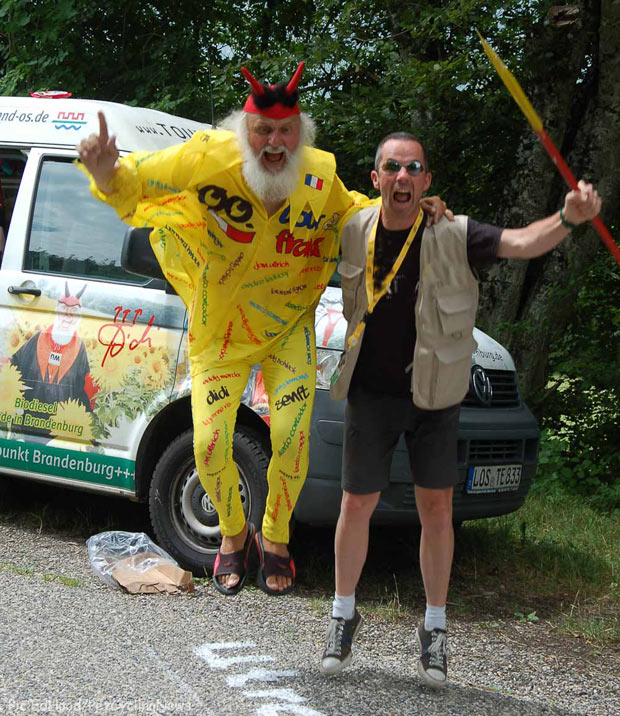 And there’s Didi, and we know it’s corny and it’s ‘been done’ – but we HAD to take a picture! 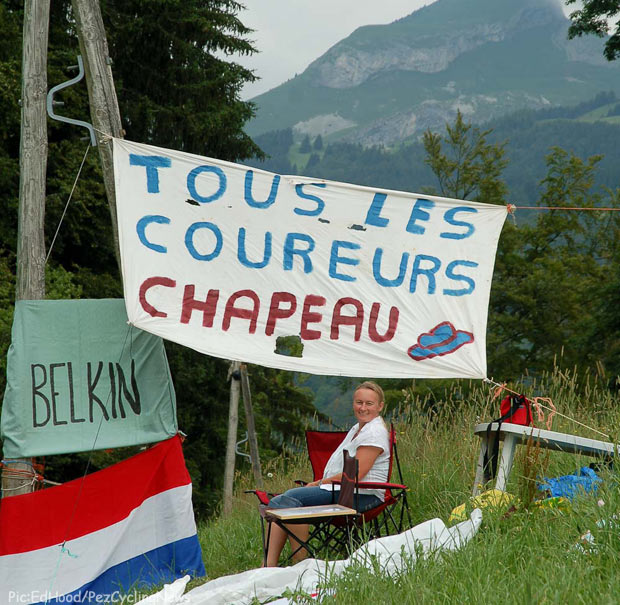 ‘Tous les coureurs, chapeau’ (hats off to all the riders) says the sign just off the top before we dive onto the fast descent of the L’Epine. 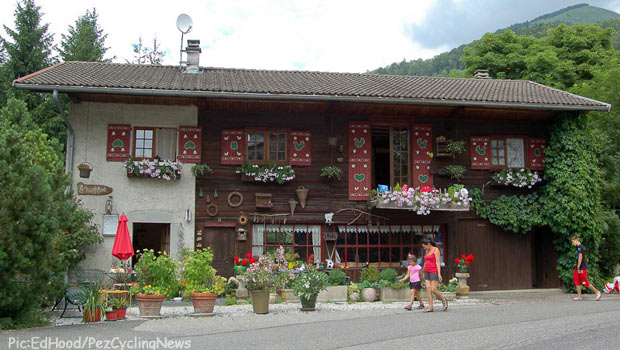 We love the timber architecture in these parts – it’s just so easy on the eye. And here we are on the last climb with Nostalgi blasting the French version of the Isley Brothers classic, ‘La meme chanson.’ (Same Old Song) It’s our new French favourite, maybe taking over from Johnny Hallyday’s ‘Don’t Play Your Rock n’ Roll?’ 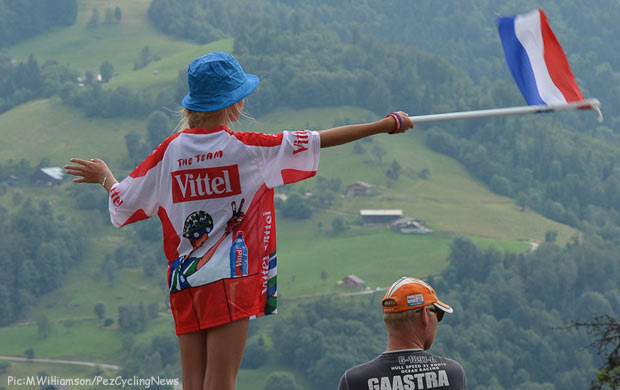 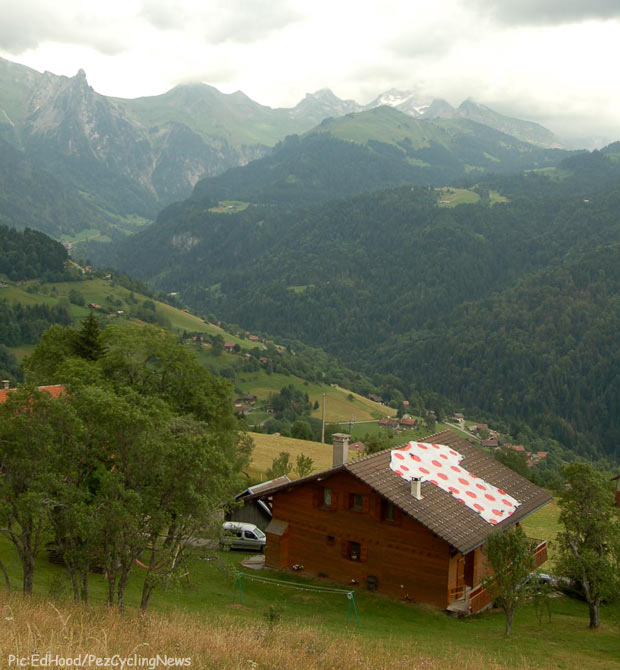 Park up time on the Fry and take in the view. The climb was first used in 1994 when Russia’s Ugrumov was first over, this will be the fourth time it’s been used – with the last man to top it, Floyd Landis. Moving on quickly…

The rain starts, and out on the parcours we hear on the radio that it’s Rolland alone, ahead of around a dozen chasers – survivors of the big break of the day. But by the time the race gets to us it’s Costa alone in the lead with ‘that’ look in his eye – and at least there’s no danger of him over heating as the thunder storm unloads on that nice Movistar jersey. To use my usual expression, ‘the survivors of the break are scattered all over the hill.’ 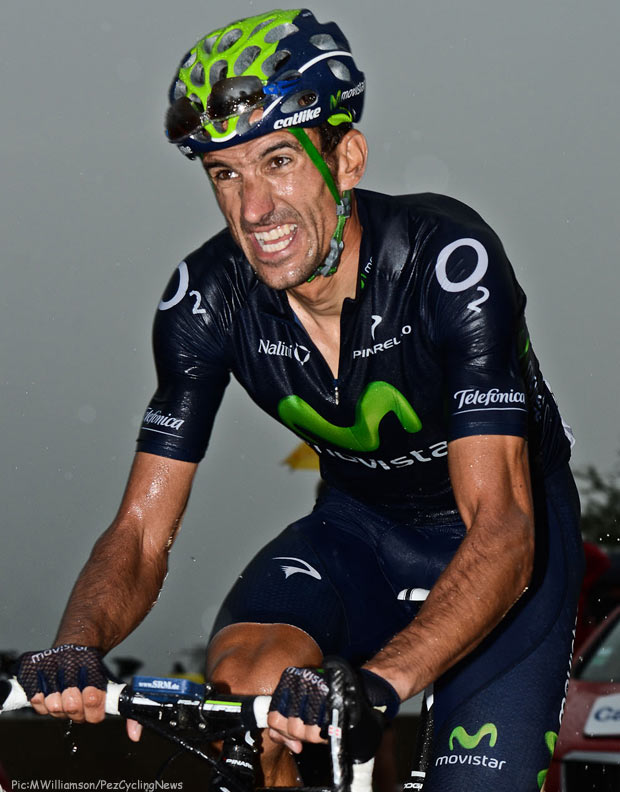 Bak, Bardet, Didier, Cunego, Geschke, Kloden, Plaza to name some of them, with the ‘Klodie’ ending the day second behind Costa. As we expected there was no big GC battle today, not after a day like yesterday; how times have changed – thankfully. So there was no change to the top five but Michael Rogers and Laurens Ten Dam dropped out of the top 10, replaced by Daniel Navarro and Alejandro Valverde respectively. 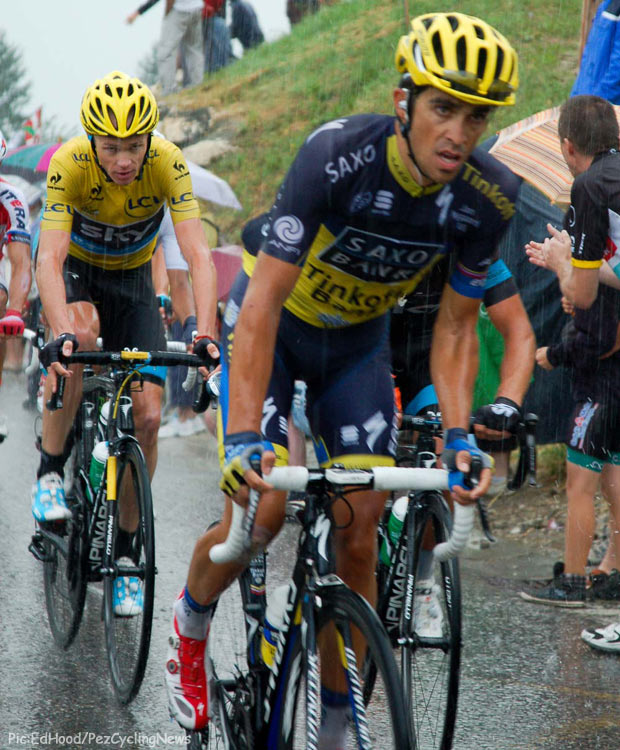 On that last climb Kreuziger drove for Contador with Froome swallowing the spray off Alberto’s rear tubular. 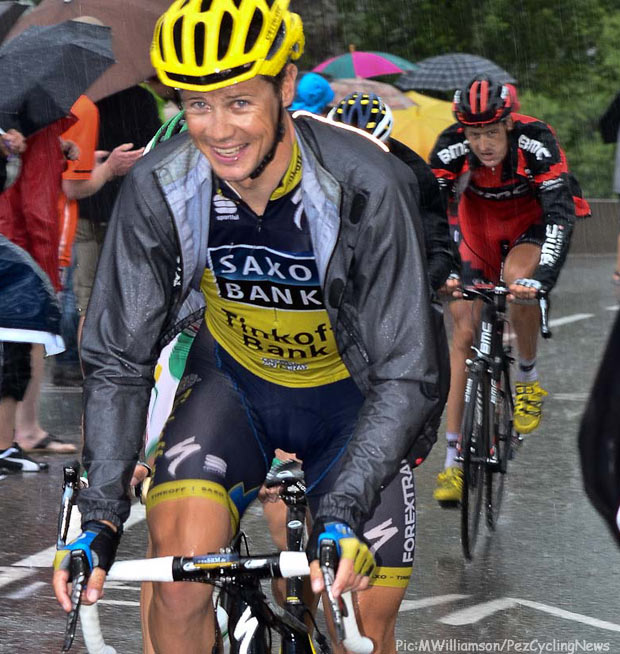 It was a day when every rider suffered – but some, like Nico Roche managed a laugh through the deluge. 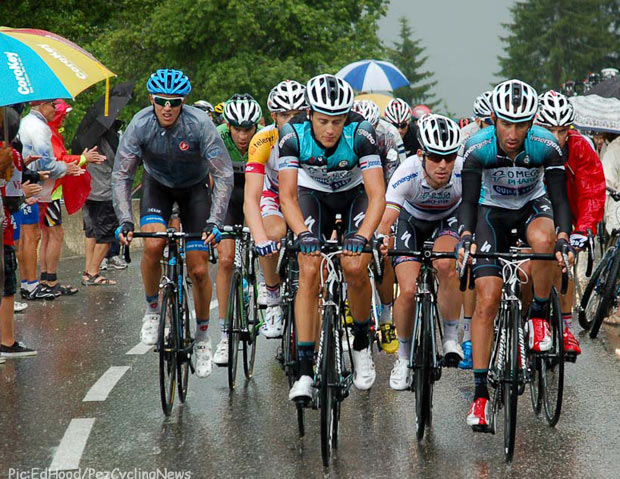 There were a lot of small groups on the hills, twos and threes – and three gruppettos with Cav shepherded by his Quick Step amigos in the last one. 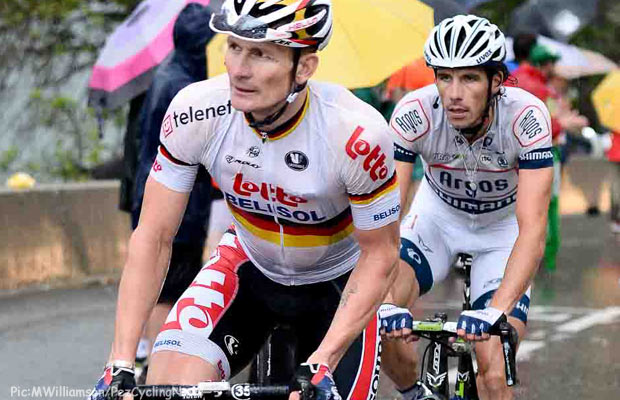 Big Andrei Greipel was actually ahead of the last gruppetto and not looking too stressed. But it was Costa’s day; here’s what he had to say;

“I’m really happy. First thing, I have to thank Plaza and Rojas, my team-mates in the break, who helped me in everything. They left me fresh at the foot of the last climb so I only had to attack and win, and things went perfectly. It was basically the same strategy from the other day: I had to wait for the last climb and make a move.
Fortunately, my legs responded as good as they could do. I think this victory will bring much calmness to the team.

“Since that day into the crosswinds, my goal was clearly going for stage wins; we had to forget about what happened, and we will really do, because I will remember this Tour by what happened afterwards; these two victories that make me so happy. Movistar is not only Nairo and me; there’s Alejandro, always up-front, and a huge team helping us out, making a massive work you often don’t see – we owe them everything we have.

“We’ll be helping Nairo tomorrow – he’s impressive. Let’s see if we can get him safely into the podium. These two stages go to all the people supporting me from Portugal and all those ones always by my side. Stage 20 tomorrow; don’t expect any ‘death or glory’ attacks – Contador will go through the motions and Quintana won’t risk losing a podium spot.”

PEZ? We’ll be having a picnic – if it doesn’t rain, that is.

Tomorrow’s penultimate stage is another grueling day in the high Alps, and one last chance for heroics, tune in and look for more on the PEZ Facebook and the PEZ Twitter page.