Roadside St.15: Ed Hood, the PEZ man with the most Grand Tour experience, has hit the French ground running. He flew out of Scotland this morning and has been exploring Carcassonne this afternoon and crying into his beer over Jack Bauer being caught only metres from a Stage win in Nîmes. Ed’s 2014 Tour adventure starts here.

The summer of 2009, the phone rings, it’s Viktor, PEZ’s talent scout and prophet in residence; ‘there’s a boy from New Zealand burning up the kermises – you best have a word with him!’

Contact is established via the guys at Kingsnorth Wheelers, the Anglo/Flemish team which our Kiwi flyer is riding for.

I make the phone call on a Saturday evening and have my first chat with Mr. Jack Bauer; he’s a little bemused that we should be interested in him but is friendly, open and instantly recognisable as, ‘one of the good guys.’

Scottish ex-Motorola professional and general ‘Mr. Fix It’ and agent Brian Smith sees the interview and for 2010 Jack is riding pro with the Endura team.

But not in the team jersey; he wins the early season NZ Elite Champs ahead of the likes of Julian Dean.

He spends two seasons with Endura before Garmin snap him up for season 2012 where he’s been ever since. 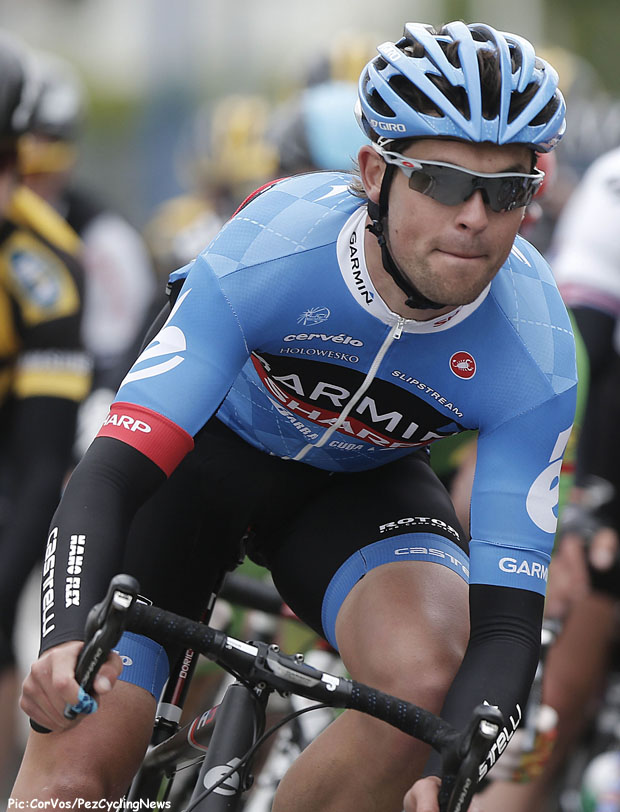 Today, July 20th 2014, Dave and I fly in to Carcassonne to join the Tour de France circus.

Carcassonne is in the Languedoc region, the far south of France, close to the Pyrenees, it’s a medieval town divided into two distinct parts. 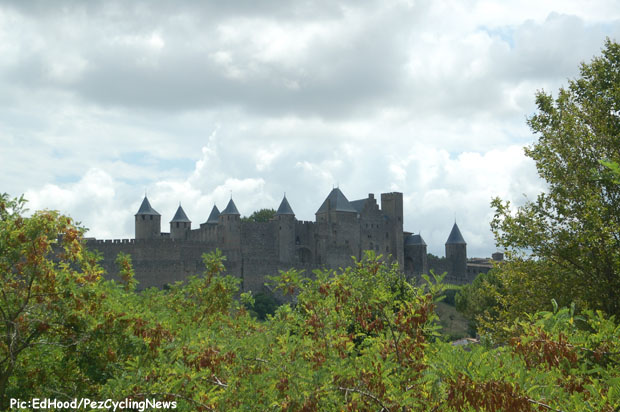 The Ville Basse is the low lying modern part of the town – but up on a promontory sits the Cite, originally dating back almost a thousand years but restored in 1844 and a source of debate ever since from those who say the restoration was too perfect and soulless.

Dave and I decide to go see for ourselves as we have a day to explore before the Tour arrives for the second rest day and Tuesday stage start. 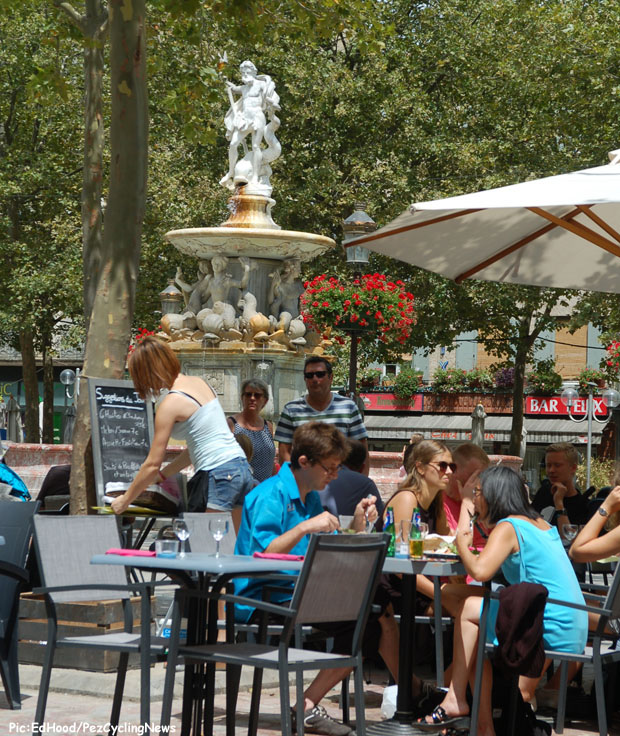 There’s a good cafe scene in the Ville Basse as you’d expect in this part of the world where the pace of life is so much slower. 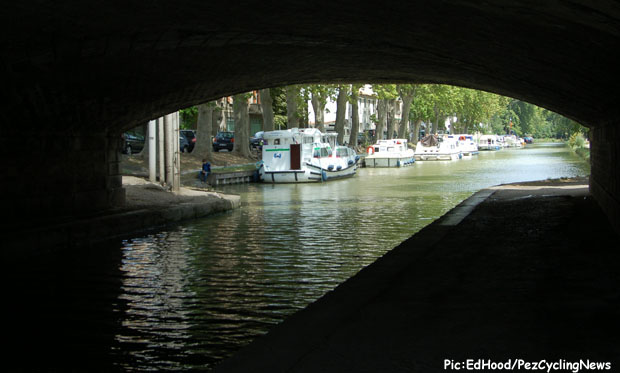 The Canal du Midi runs through the town, part of a system of waterway which links the Atlantic with the Mediterranean.

It’s mostly leisure craft on the canal these days but in 1681 when it was inaugurated it brought prosperity to the region. 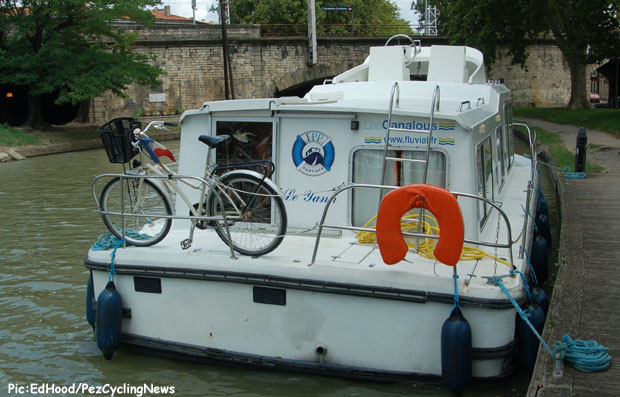 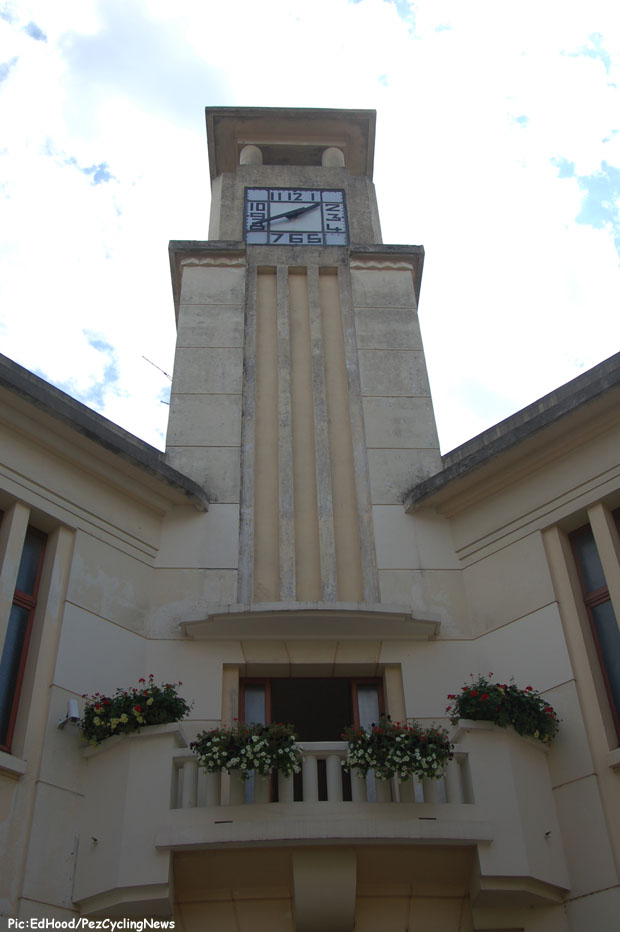 In the Ville Basse Art Deco sits beside the inevitable fountains – that cool spray is so refreshing in the heat of a Languedoc July. 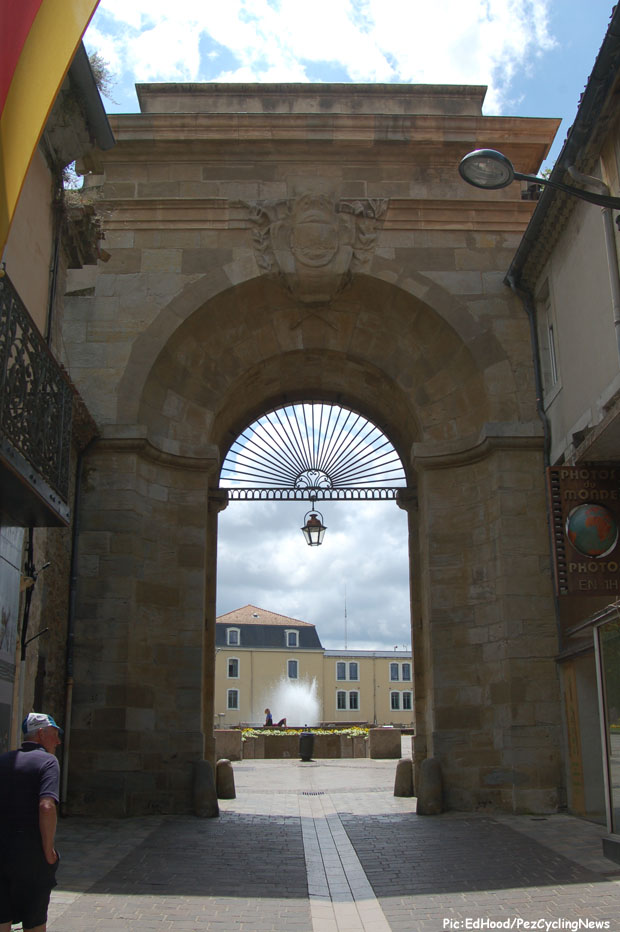 A ‘real tourist trap’ says the Rough Guide to France – and the ‘road train’ serves warning that this isn’t going to be subtle. 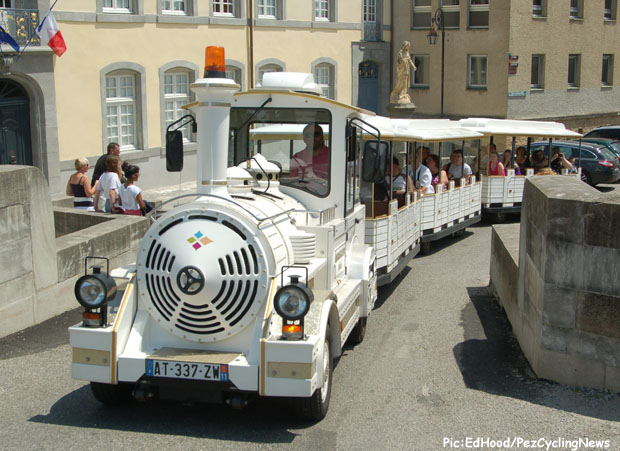 One of the auxiliary joys to being on the Tour is to be able to buy L’Equipe every day – and read it over a cold beer. 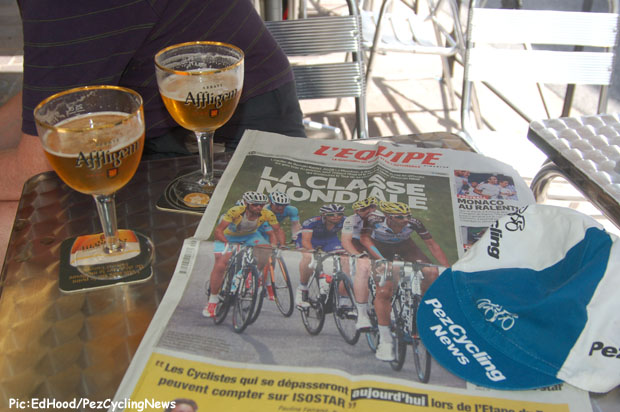 We stopped off for one before the final ascent to the Cite . . .

The Cite isn’t for the faint hearted – from the minute you cross the drawbridge it’s full on commercialization. 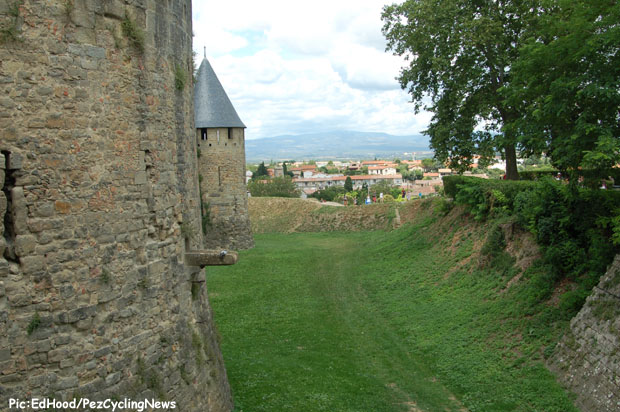 The location is lovely but there are just so many people. 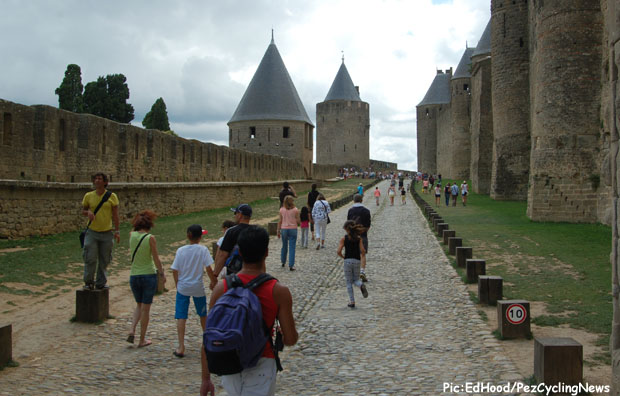 And almost as many souvenir shops punting all manner of tat to the tourists. 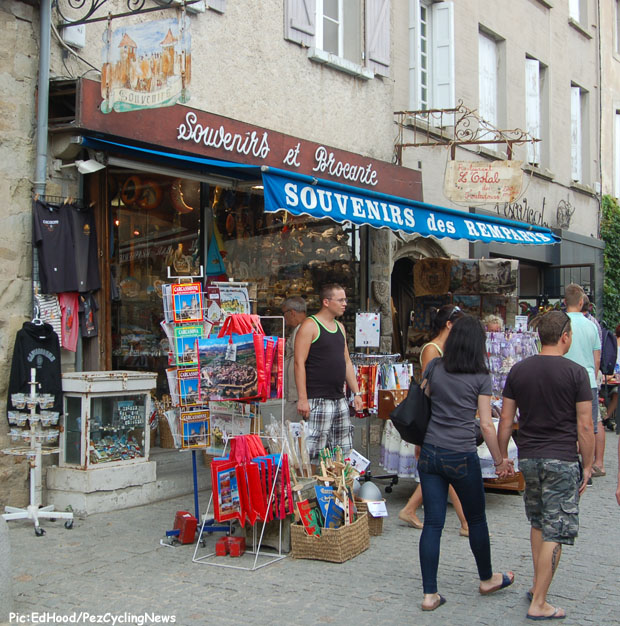 There’s even a torture museum – we thought that was what the whole place was. 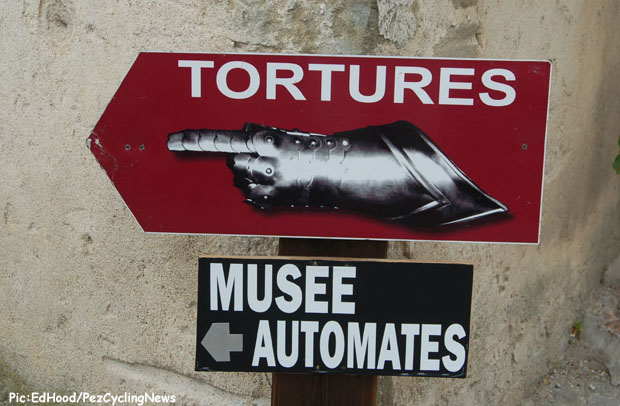 But there was a glimmer of hope – bar l’Estaminet complete with cold Pelforth, a cute barmaid, Al Green on the hi-fi and Jack Bauer on the TV. 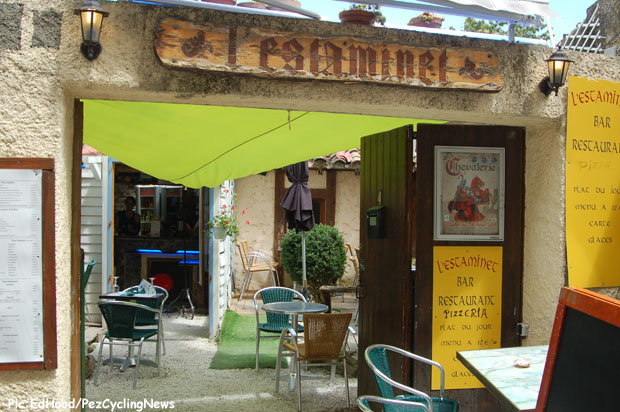 There were 115 k to go when we saw Jack and IAM’s Swiss Elite Road Race Champion, Martin Elminger spelling sweetly with a four minute plus advantage.

It’s always nice to see Jack on screen but when we finished our Pelforths and headed back for the sanity of the Ville Basse we thought that Giant, Lotto and Katusha would have Messrs. Bauer and Elminger for afternoon tea by the time we next saw a TV.

On the way down, Dave and I resolved that if we win the lottery we’ll buy the horses that pull the tourists carriages, give them their own field and never have them wear those mad ear covers, again. 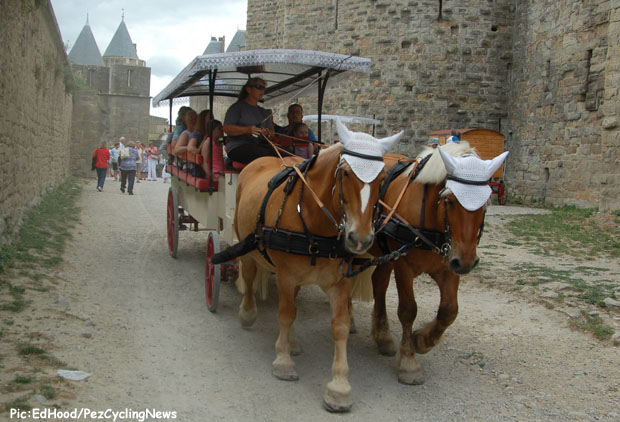 Our ramble back across town took us past Tuesday’s start area where Skoda is already in residence. 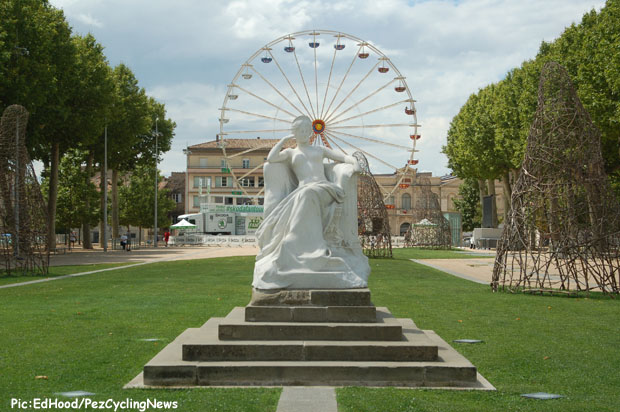 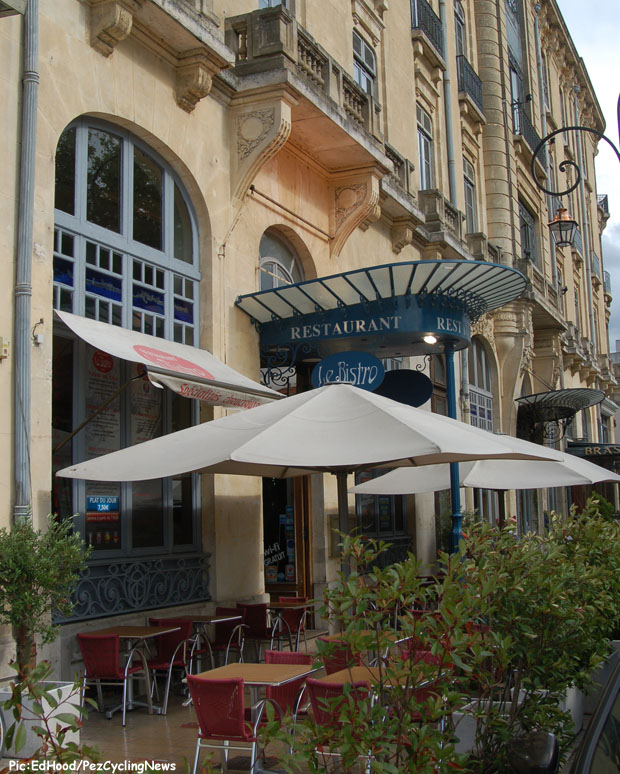 More Pelforth was ordered, the TV changed across from motor racing for us and 65 K after we last saw them our boys still had four minutes – this was getting interesting. 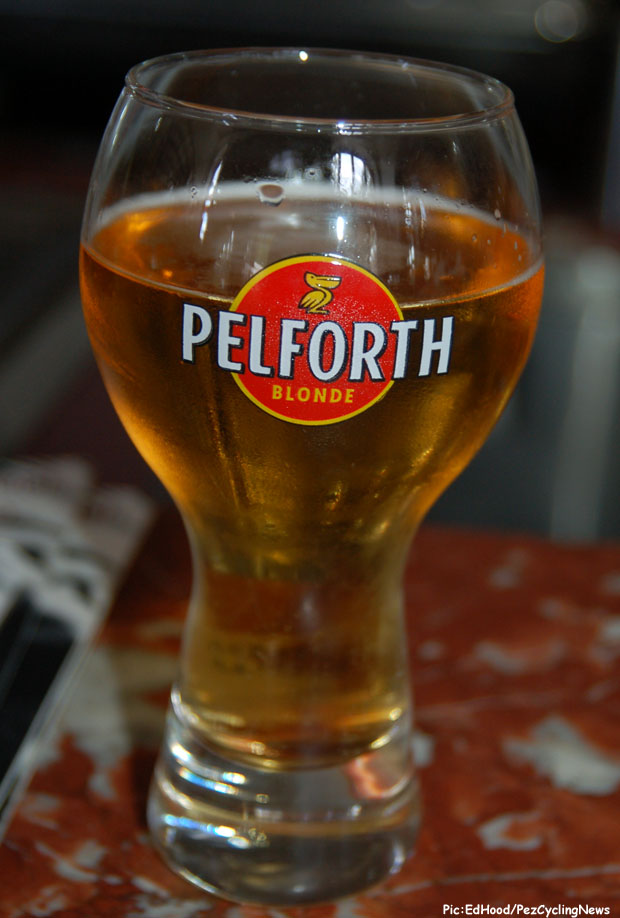 Two minutes came of the gap in no time and we thought; ‘that’s that, then!’

But then the peloton calmed, our boys kept their rhythm and as the K’s clicked by and we shifted to vin rouge we began to believe.

The gap was down to seconds at the flame rouge but Jack put in a huge spell as we shouted caution at the TV; ‘don’t do too much Jack!’

The finish straight was long and straight – maybe if had been more technical then things would have been different – and once again the difference in speed between a dying breakaway rider and a rampaging bunch became apparent – 47 kph v. 67 kph.

Jack dug deep and for a few wonderful seconds we thought he’d done it – but Kristoff is revelling in this tough Tour where the pure fast men’s stings have been tempered.

The Norwegian, Haussler and another seven swamped our boy and 10th was all that this day would give to Jack Bauer. 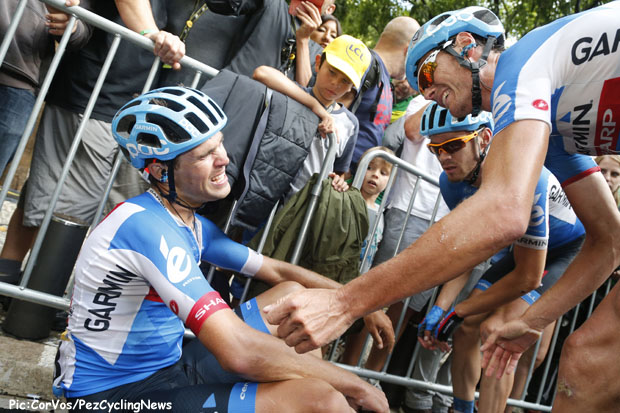 As he cried the bitter tears that only those who’ve had dreams stolen from their grasp and his team mates consoled him we sat in silence – some of that pain had made it’s way from Nimes to Carcassonne.