Roadside St.20: The PEZ Crew grills out the Tour’s last Alpine day in fine style with a roadside bbq, sausages, kebabs, and enough smoke to send signals. Let’s get cookin’…

“Alberto Contador exit le podium de la 100e Tour de France.” Those words from a French radio announcer – blasting out down the Semnoz climb, the very last ascent of this 100th Tour de France – mark the end of an era.

Alberto Contador (Saxo-Tinkoff & Spain) is no longer a potential Tour de France winner. Christopher Froome (Sky & GB via Nairobi) will ride onto the Champs Elysees tomorrow as winner of the 2013 Tour de France. If he can maintain the craving which drove him to this win then the slim man who now lives in Monaco looks set to dominate high level stage racing for the foreseeable future. 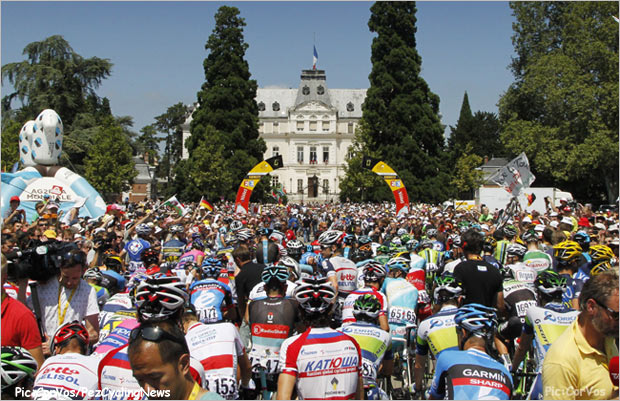 In second place was the tiny young man from Colombia who many believe will one day give his troubled nation its first Tour de France win – Movistar’s Nairo Quintana. He also takes the white jersey of best young rider as well as the King of the Mountains jersey – starting the day just 21 seconds behind Contador on GC he leapfrogged the Madrileno to steal his second spot on the podium.

But worse was to follow for last year’s Vuelta winner as Catalan Joaquim Rodriguez also jumped Contador on GC to take the last podium spot. Revenge of a sort for Rodriguez after Contador stole the 2012 Vuelta from him. 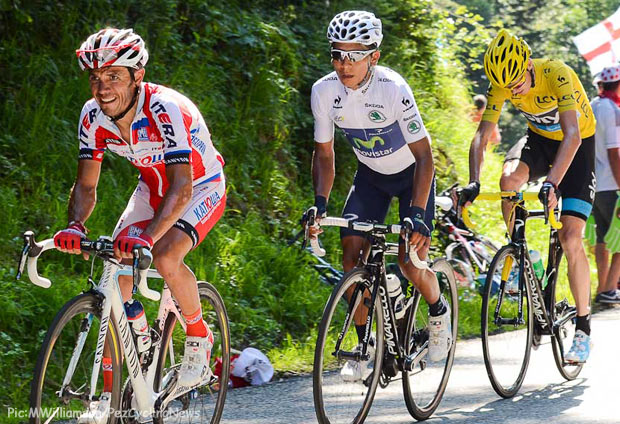 Ours started in the banal surroundings of a retail park in Annecy… There’s one bed, no evening meal and no wi-fi in the digs, so we hit the Tom Tom for the nearest golden arches. Thank Heaven for McDonald’s. Perfect wi-fi AND a Maxi Cheese Royal with a McFlurry for dessert – what more could two photo journos want on a Friday night after a good soaking on the Croix de la Fry and confinement in a hideous traffic jam?

First up – the Geant Casino supermarket. We were originally going to go for a disposable barbecue but then thought; ‘PEZ readers deserve pictures of something better than that!’ For €9:80 on sale was the Shimano 105 barbie – only 9 speed and grey finish but perfect for the PEZ sausages and kebabs. 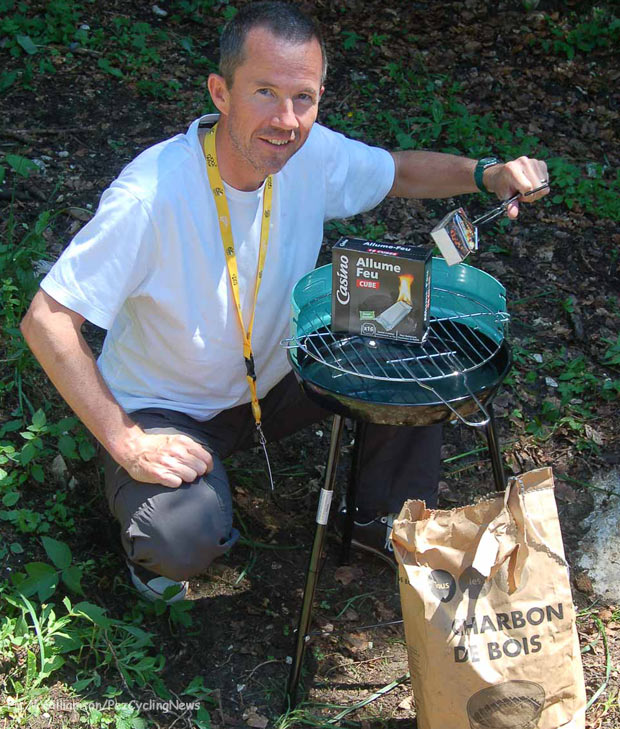 There’s no time to drive the stage, not with a barbie to build; we head straight for the last climb of the 2013 Tour de France – Annecy-Semnoz. It’s HC, 10.7 K @ 8.5% average – that’s steep. The organisers would have been gambling that the race would have been closer coming onto this ascent – not with one man five minutes clear. However, there’s much to race for – Quintana could leap frog Contador to move one step up the podium.

But the Colombian has to watch his back – Rodriguez has been riding into form this week and this is a Purito peak, if ever there was one. And it’s just possible – if Alberto is as tired as he seems – that Rodriguez could jump over Contador, too.

The barbie instructions weren’t too tough and we used a knife as a screwdriver – in with the fire lighters then the charcoal. Ignition !

We have a new buddy, Theo from The Netherlands – he likes us even more when we give him some of our barbie offerings. 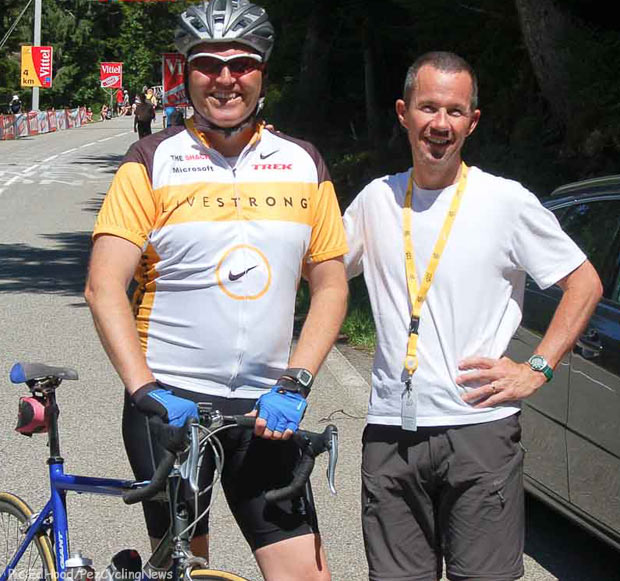 He’s still a Lance fan; ‘the fact that they haven’t designated new winners after they took Lance’s wins away says everything about that generation of riders – he’s a scapegoat !’ The man has his opinion…

The caravan – more hats, biscuits, mini sausages, key rings – most of which we’ll have to dump before we fly home. 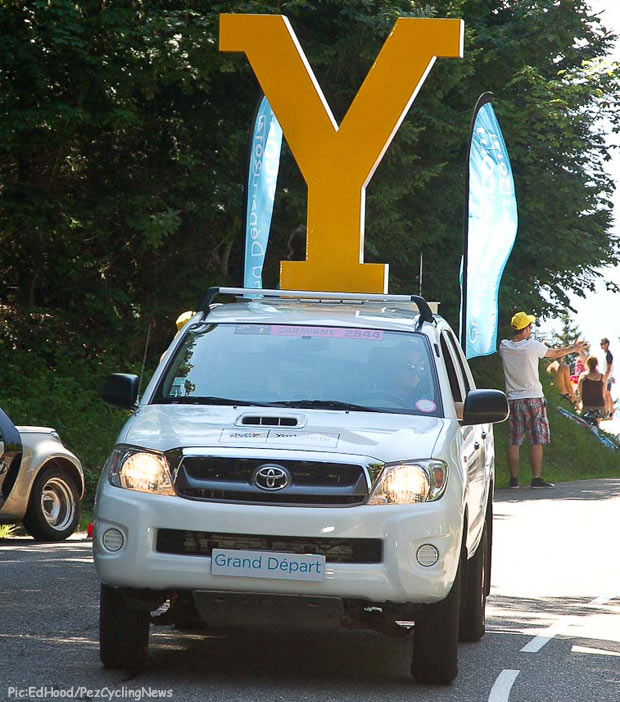 And there are the vehicles promoting the Grand Depart in Yorkshire, 2014. Just please don’t mention it in front of my amigos, Viktor, Ivan and Dave – not if you don’t have a spare hour to spend getting your ear chewed.

“What’s Yorkshire got to do with Le Tour de France ? – crass commercialism ! – against the spirit of the race ! – an affront ! – exploitation !” 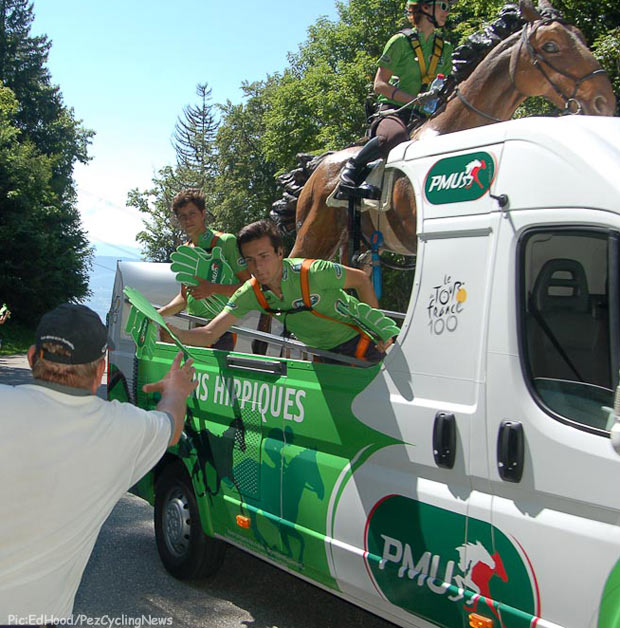 And the old guy next to us just has to have another PMU hand. The caravan is an essential part of the race – it warms the crowd up. If you drive a stage before the caravan it’s quite subdued; but after the caravan it’s a different game – mad! 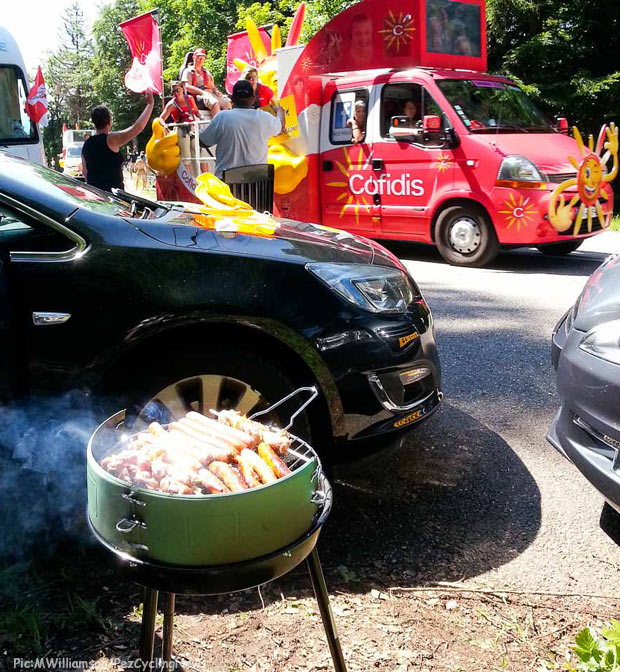 The spicy sausages on baguette with coleslaw are epic – and we still have the kebabs to come.

We’re at four to go so they ain’t far away. One of the camper’s radios blasts out the news that we have three leaders; Quintana, Froome and Roriguez – could Alberto being saying ‘adios’ to the podium? He’s chasing with team mate Kreuziger and Porte – if Alberto loses enough time and Quintana stays with Rodriguez then the Colombian goes second and Rodriguez third. But if the Catalan can distance Quintana then he could go second.

It’s all to play for. The choppers get closer, the photog bikes roar up, then there’s lower note of the police bikes, matching the pace of the riders – and they’re here.

Rodriguez leads, the chunky figure of Quintana on his wheel then the gangly Froome, ‘sitting pretty.’ According to the ASO press release after the stage, ‘Purito’ said to Froome and Quintana that he’d drive it all the way up and not contest the sprint – all that mattered was making the podium. 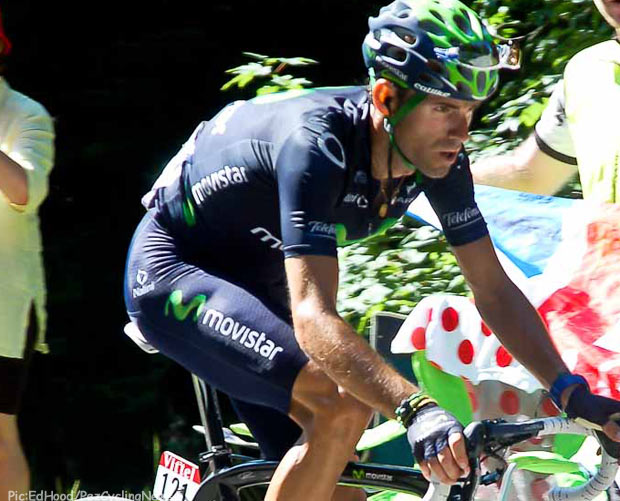 Next up was Alejandro Valverde (Movistar & Spain) looking good and underlining the fact that had it not been for that untimely wheel change on the day of the ‘vent folie’ (mad wind) he’d have been in the reckoning. 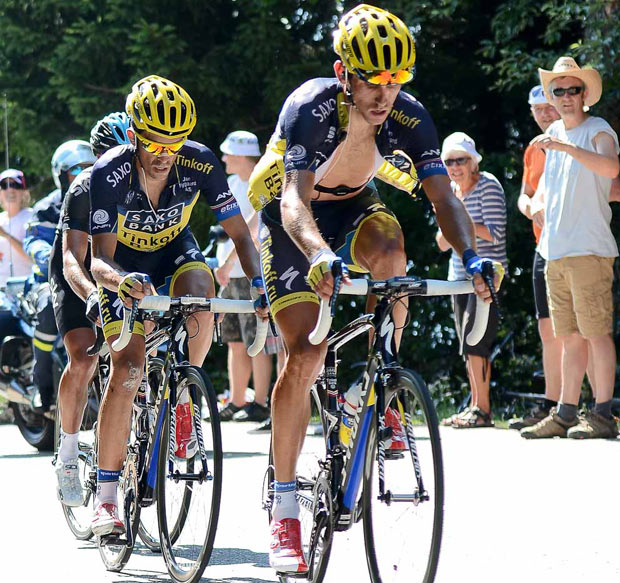 Then it’s Kreuziger dragging his Capo, Contador and Froome’s loyal side kick, Porte – I haven’t put a watch on the gaps but it looks like ‘adios podium’ for Contador.

Andrew Talansky (Garmin & USA) is well there – he could be going top ten? 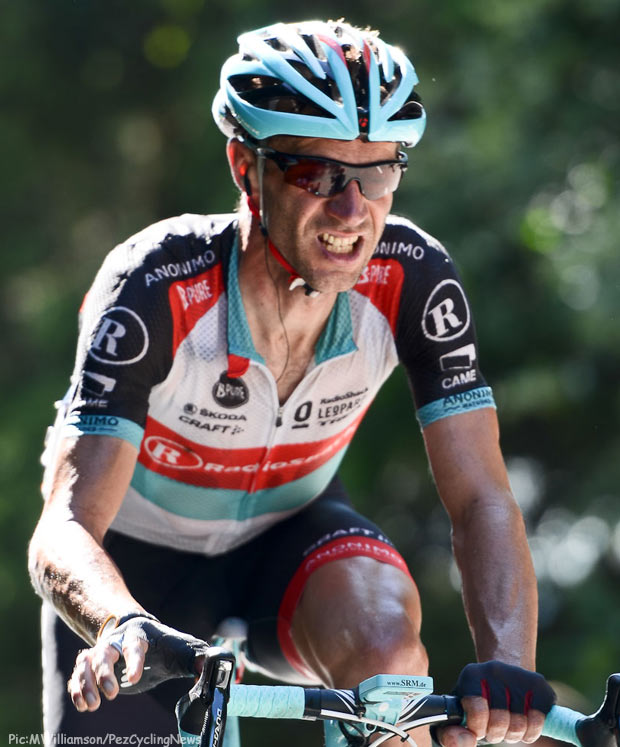 ‘Jensie’ Voigt’s (Radio Shack & Germany) solo adventure only came to an end on the final climb; an ‘oldie but goodie’ he certainly still gives sponsors value for money – grabbing that valuable TV time. 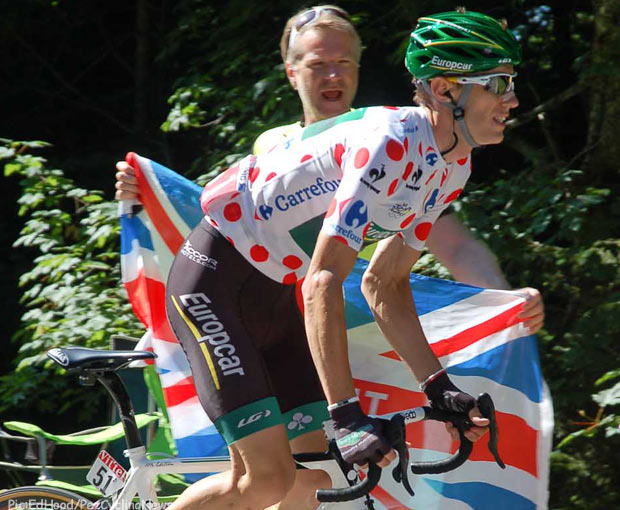 Pierre Rolland wears the polka dots but despite his exploits yesterday he failed by a slim one point to whip it from Froome’s shoulders – wearing it only because the Sky man is in yellow so the jersey goes to the rider who is second in the mountains competition. Rolland wasn’t looking forward to wearing the jersey on the Champs Elysees but then having to surrender it for the final protocol. Quintana has solved that for him. 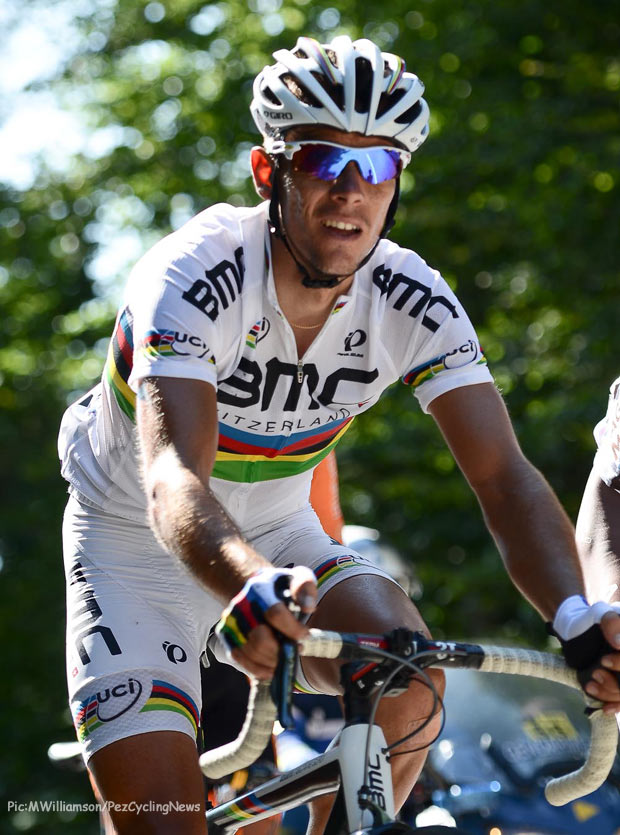 Phil Gilbert (BMC & Belgium) wears the same pained expression that he has for the last three weeks. A grim Tour for the big budget Swiss squad with that problem of Cadel/Tejay leadership issues long forgotten. 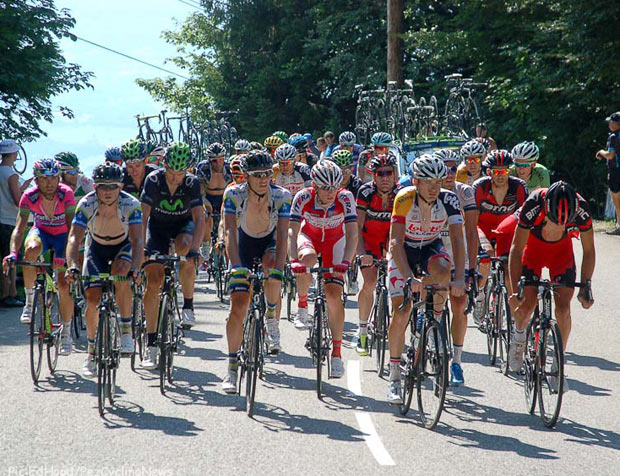 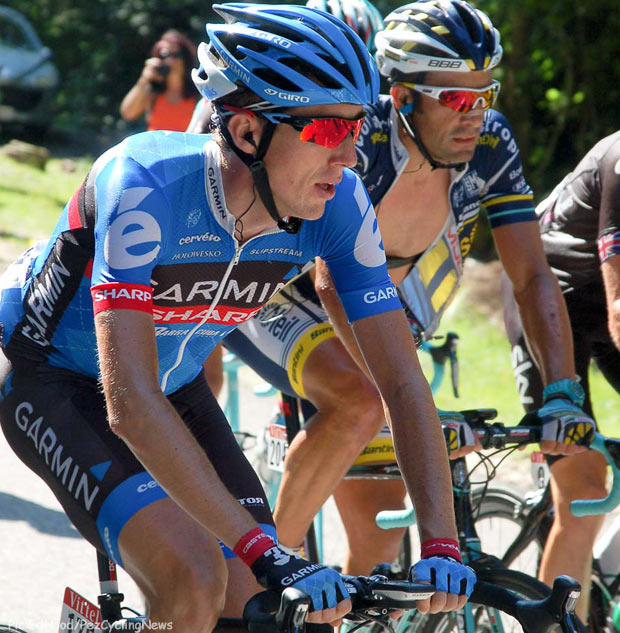 It’s all one’s, two’s and three’s with the first big group containing an unwell but still battling, Dan Martin. 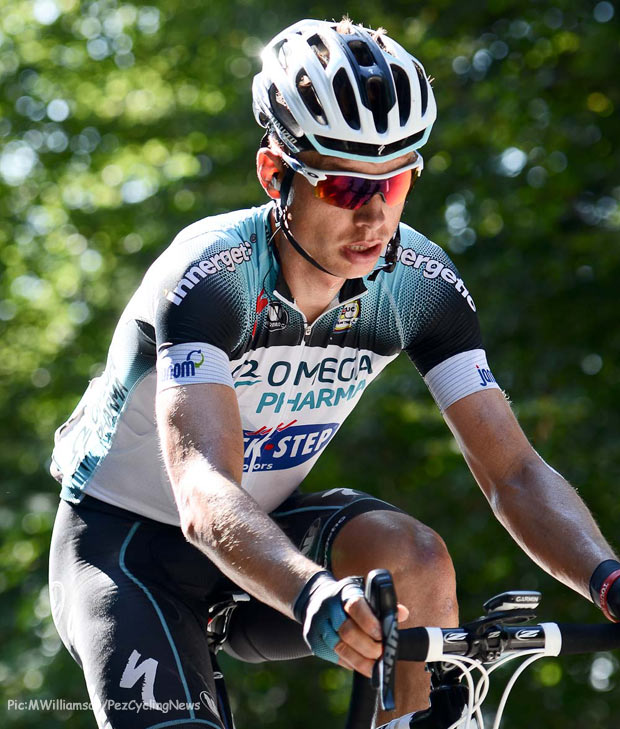 The Tour is no respecter of big names; Tony Martin (QuickStep & Germany) won the Mont-San-Michel time trial and is ‘chrono Koenig’ of the world – today, he’s just another pained face in the autobus. 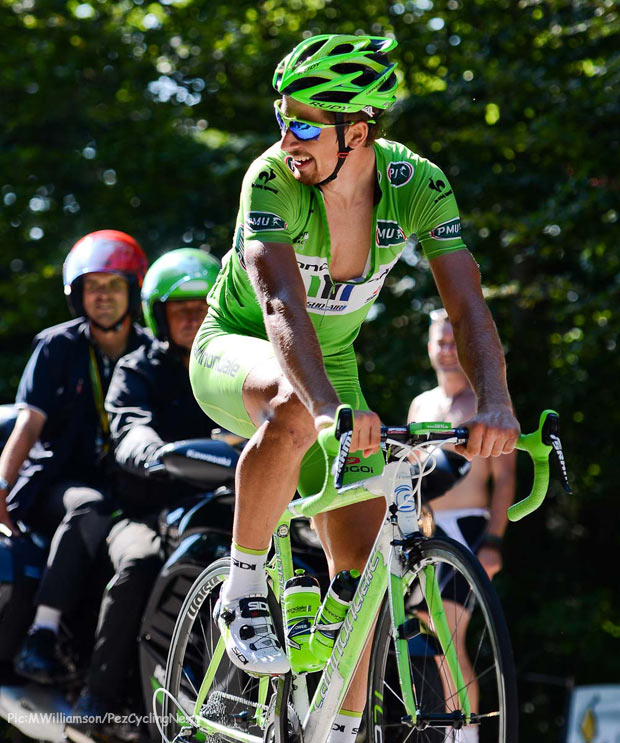 Sagan is behind, looking less depressed than he usually does in the montagne – it’s the last col, after all and the green jersey is in the bag. 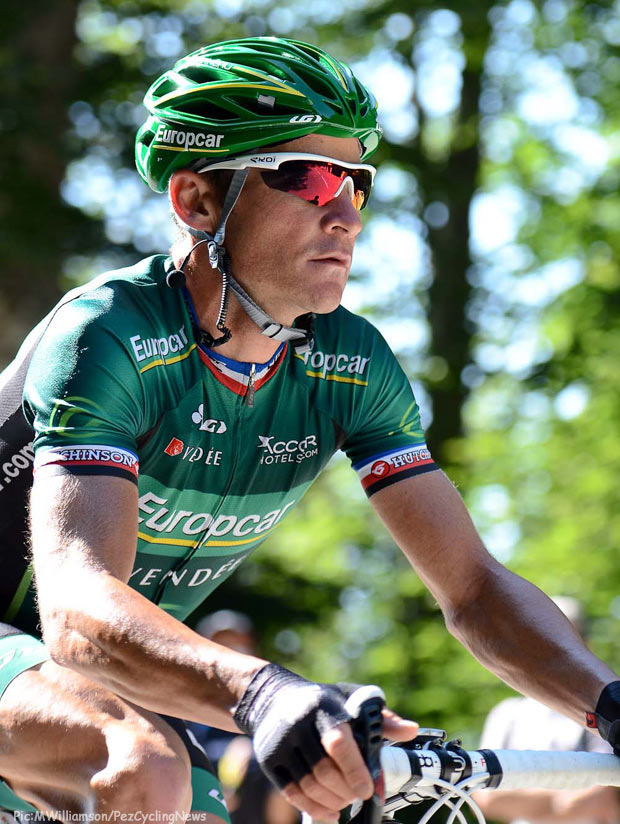 Tommy Voeckler (Europcar & France) makes up for that, though – not the winning, smiling TV we know and love. 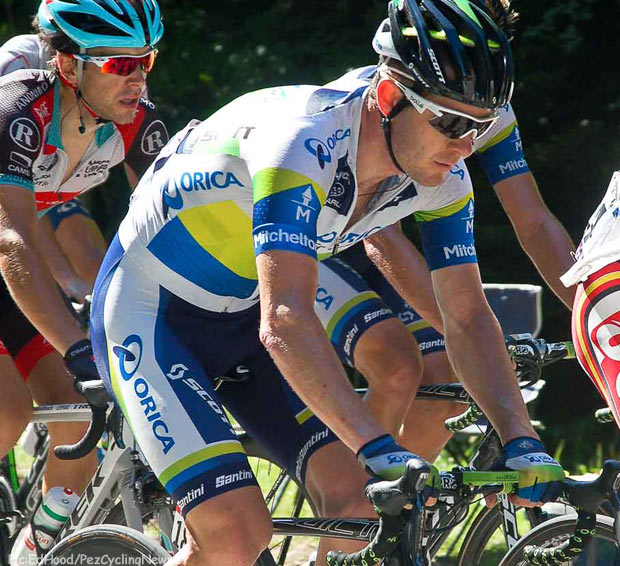 Matt Goss (GreenEdge & Australia) looks thoughtful, a great early Tour for the Aussies with a stage win for Simon Gerrans, TTT triumph and yellow for Gerrans and Impey. But they haven’t had as much fun in the mountains and Matt just isn’t getting up there in the mass charges – his body language on the bike says much. 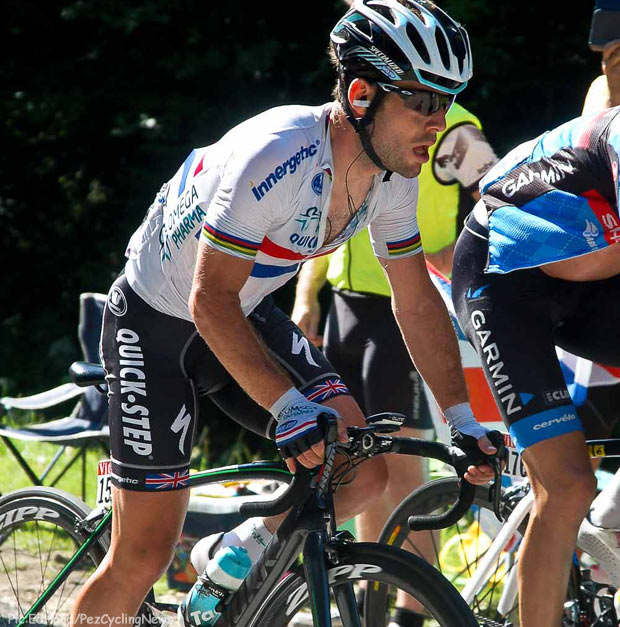 Whilst Cav is using that season ticket of his for the autobus; we have seen him look worse – it’s a big day for him, tomorrow. 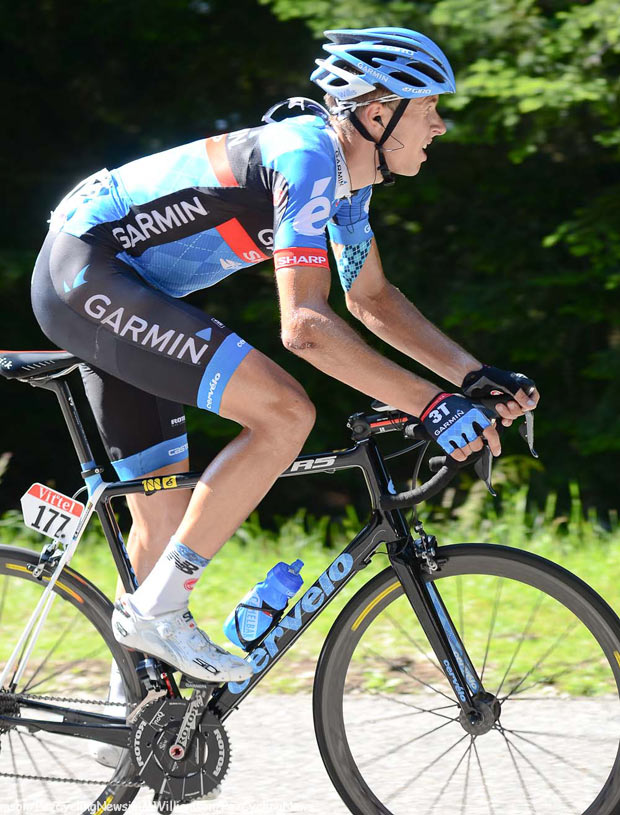 Stone last is big Garmin man, Ramunas Navardauskas – but not so far behind the autobus. Le voiture balai (sag wagon) passes – it’s time for us to go, Paris calls.

Froome succeeds Wiggo as Britain’s Tour hero – but without the sideburns; a new Colombian star lights up the heavens, let’s hope it doesn’t burn too bright, too quickly; Purito makes it to the podium of every Grand Tour – but for Alberto Contador, the autumn has arrived.

See you in Gay Paris, a demain.