Roadside: What a better way to see the Tour de France than in the Pyrenean mountains with L’Equipe open in front of you and in a tent with a TV and a drink in your hand. Ed Hood knows how to see the Tour and have a good time. Day three…

There are 1200 metres to go when Rafal Majka turns to the camera and, as the sweat drips from him, gives the viewers a wink.

A laugh ripples around Chez Meme bar and a couple of minutes later there’s a round of applause as the young Pole takes his second stage win of the 2014 Tour de France. 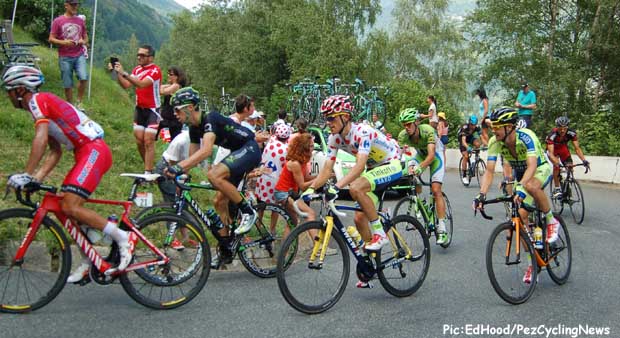 When we spoke to his team mate, Michael Morkov on the rest day he told us that Majka had ambitions in the Pyrenees – he got that one right.

Tinkoff-Saxo may have lost their captain, Alberto Contador but few can have imagined how strongly they would bounce back.

Majka won in the Alps, Rogers yesterday and Majka again, today – the boys in blue and yellow have pulled off an excellent salvage operation.

Another day of brilliant, believable racing in Le Tour.

We started the day with L’Equipe: 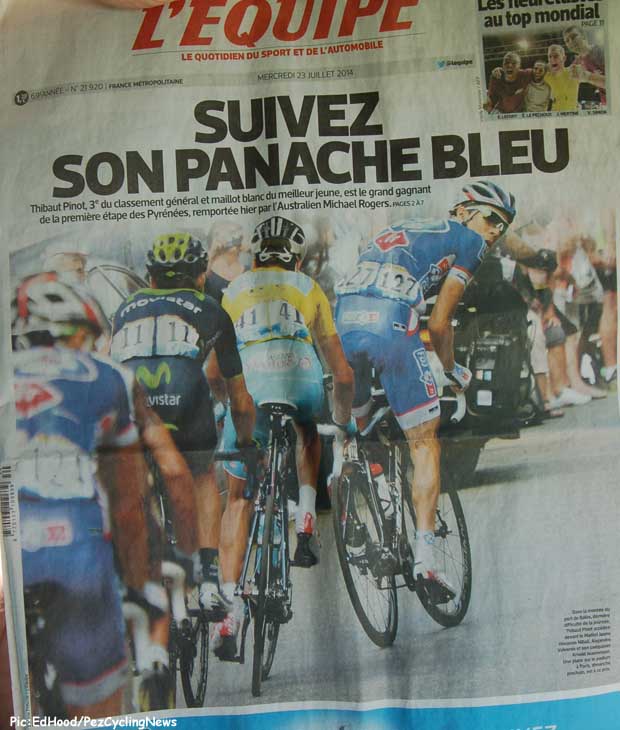 Yes, Thibaut Pinot is the man of the moment, up to third and best young rider.

But the even better news for the home nation is that Jean-Christophe Peraud sits fourth and the previous incumbent of the white jersey, Romain Bardet is fifth.

I can’t remember the last time that the situation was so healthy for France in the last week. 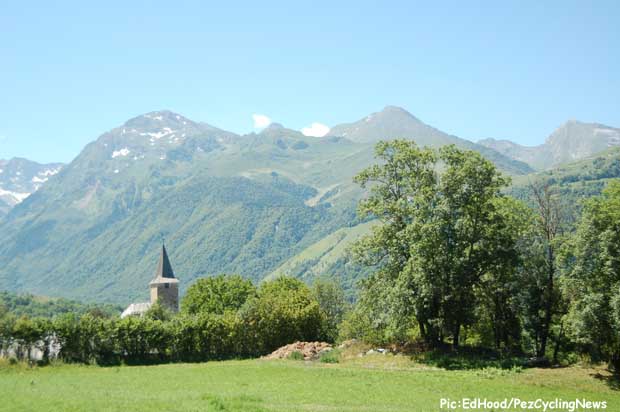 Today we decided that we’d be early on the climb to catch the vibes and guarantee a spot.

By tour standards it’s a short one but the profile for the second half is savage with virtually no valley roads – your original ‘Sandvik saw’ profile.

It’s a glorious morning when we leave Lourdes, yes; one of the civilized worlds tackiest – and most revered – towns is base camps for the Pyrenees.

There are more tat shops than before with ever tackier merchandise by the truck load.

Seven million pilgrims arrive in Lourdes annually, to be “looked after and exploited” as the Rough Guide to France puts it.

It was 1858 when 14 year-old Bernadette Soubirous had her first of 18 visions of the Virgin Mary – and the souvenir shops have never looked back, since.

Maybe we’ll take some pictures for you, tomorrow? 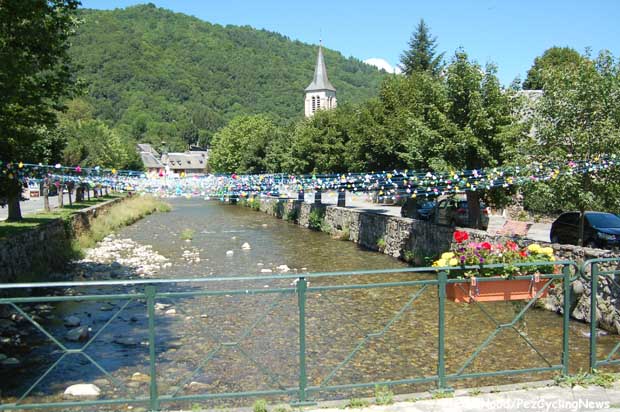 The scenery was fabulous on the way down and we obtained a prime spot on the Louron-Azet; but not before we’d employed our civil engineering skills to ramp the hire car off the road and onto the grass without removing the front spoiler. 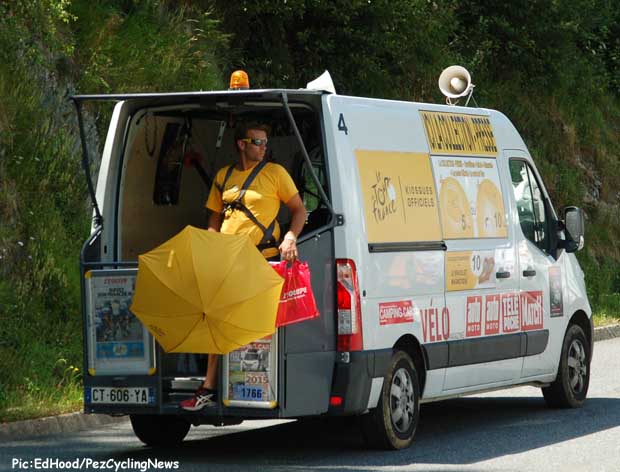 Business is slow for the L’Equipe vans – selling more of that stuff you really need ’til you get home and think; what the hell am I gonna do with this ? 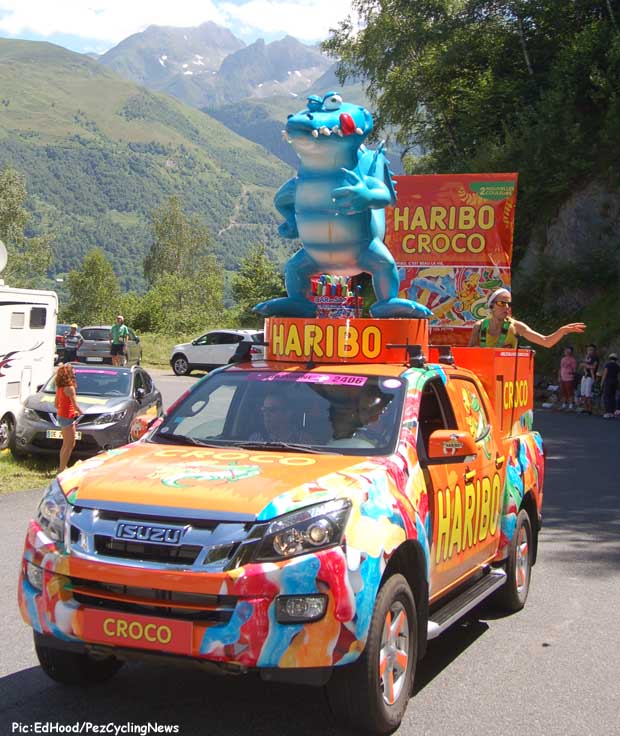 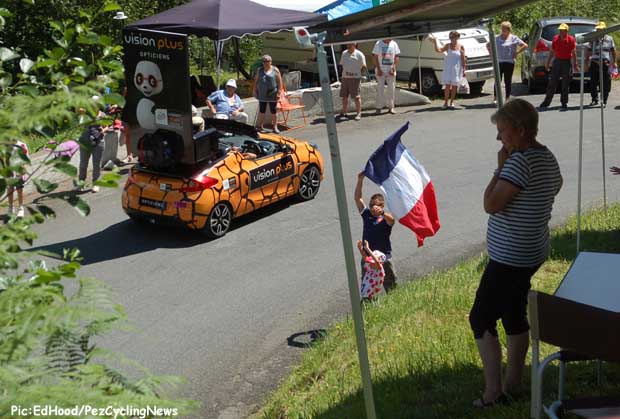 Then it’s caravan time and I HAD to take some photos – to add to the thousand which inhabit my computers from over the years.

I don’t know how many times I’ve stood beside a mountain road and waited for the air horns on the motorbikes and rotors on the helicopters to shatter the peace; dozens of times – but I still love that feeling of expectation. 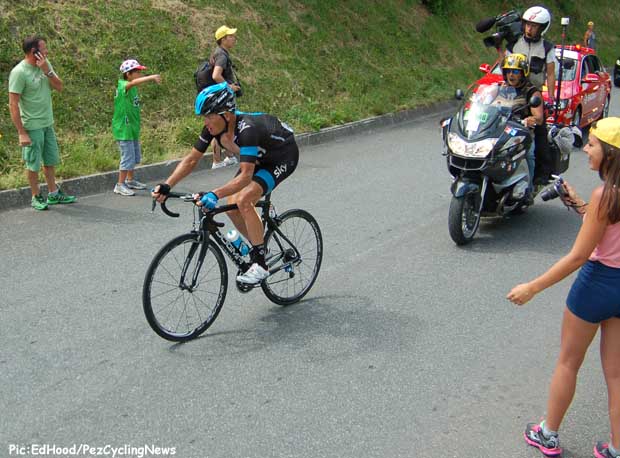 Kiryienka for Sky is first up but even his automaton style isn’t going to hold off the coming storm – a dismal Tour thus far for the team with the image but no ‘Plan B.’ 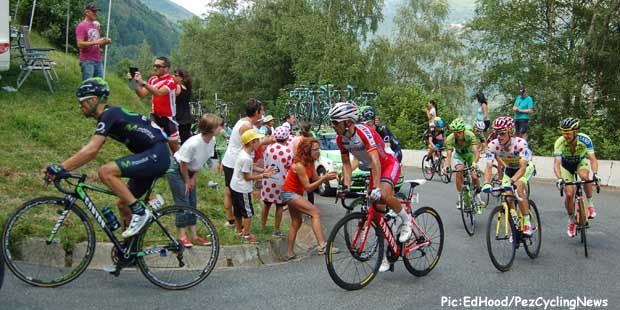 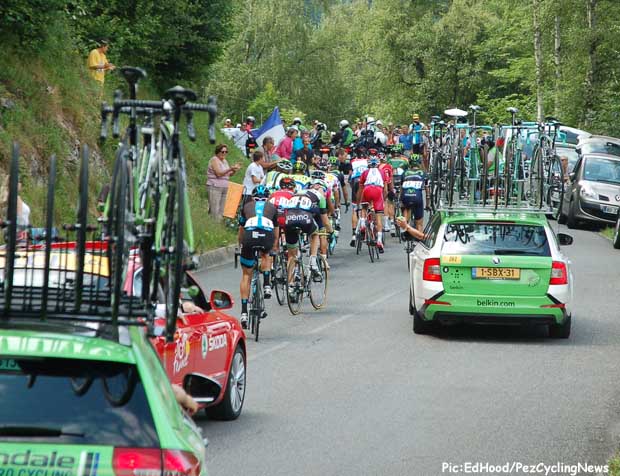 Maybe the winner will come from one of them ?

A minute or two passes and it’s those F des J ‘bleus’ pushing hard on the front with Pinot not hiding in the wheels. 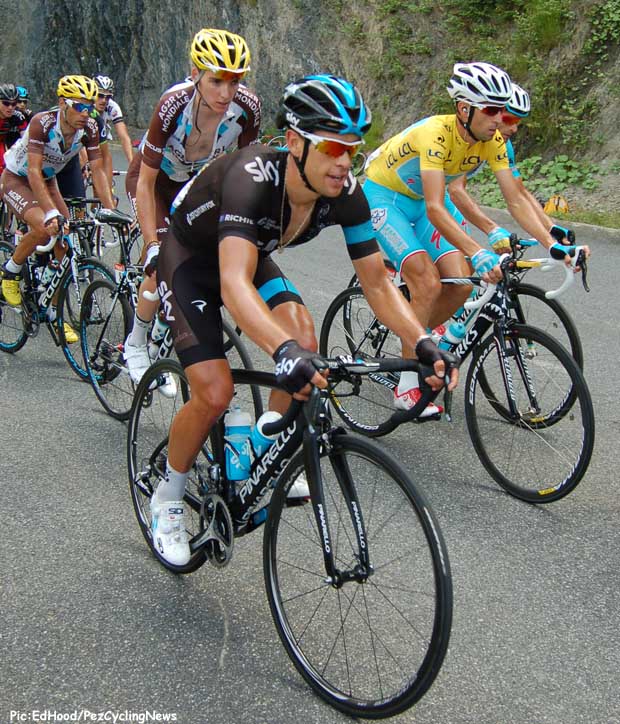 Nibali looks ice cool, the other ‘Bigs’ less so, Peraud, Bardet, Valverde – and risen from the grave are Tejay van Garderen and Richie Porte. 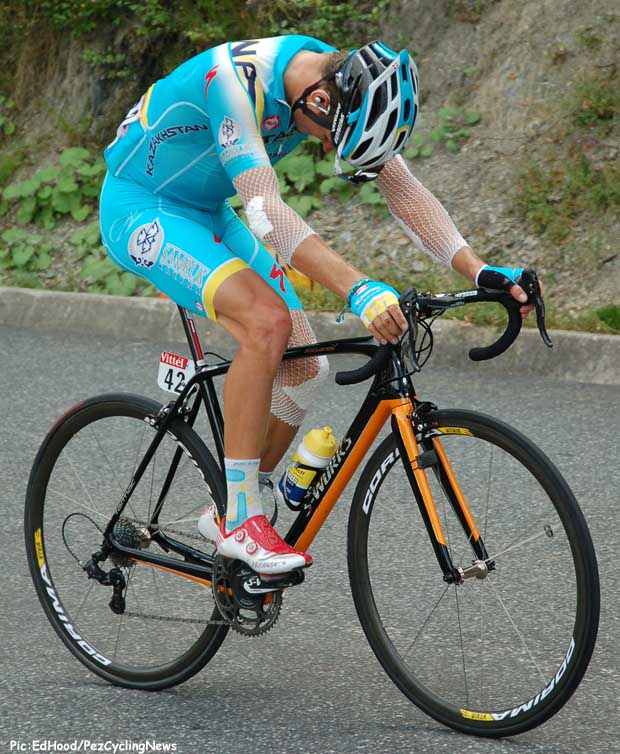 Fuglsang has ‘popped,’ his head slumped between his shoulders – no wonder, life in a Roman galley would be easier than being an Astana equipier in this race. 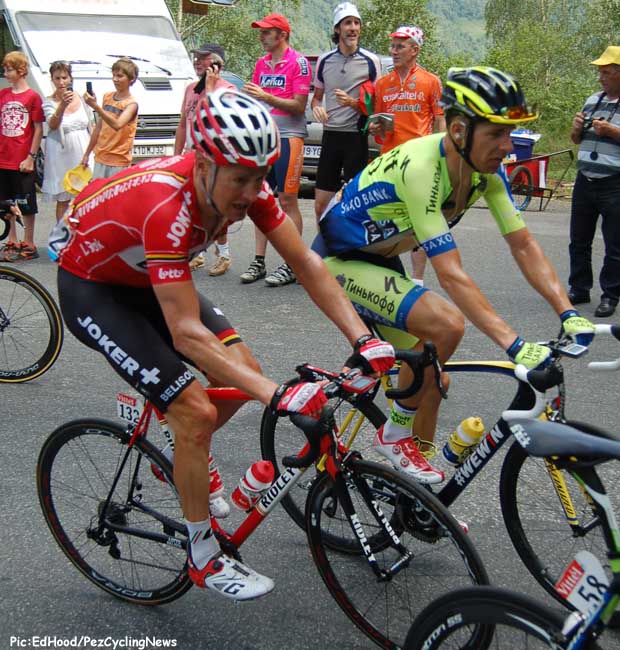 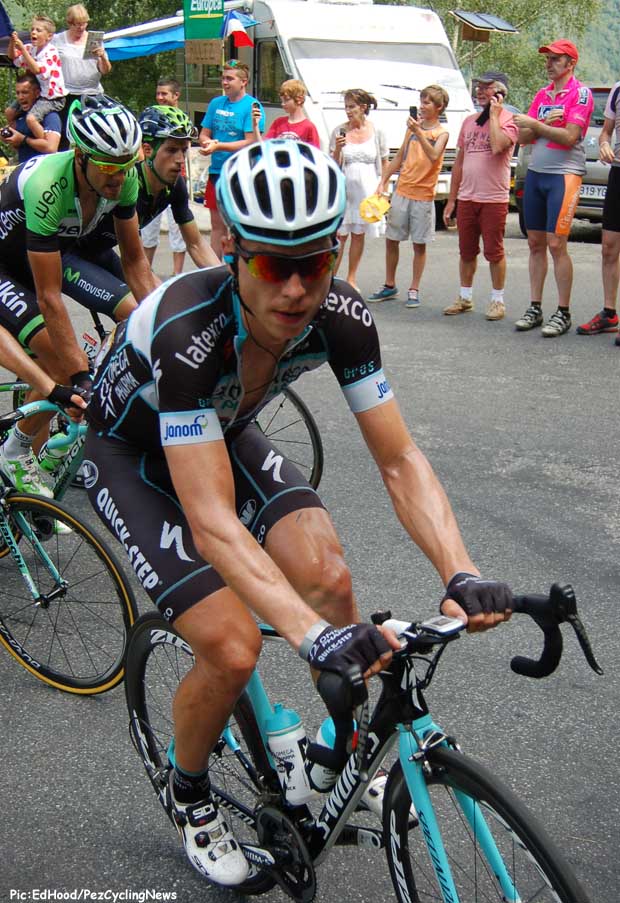 And Tony Martin drags himself up another mountain – only two more stages ’til he can curl himself up in a ball on that Shiv and do what he does best. 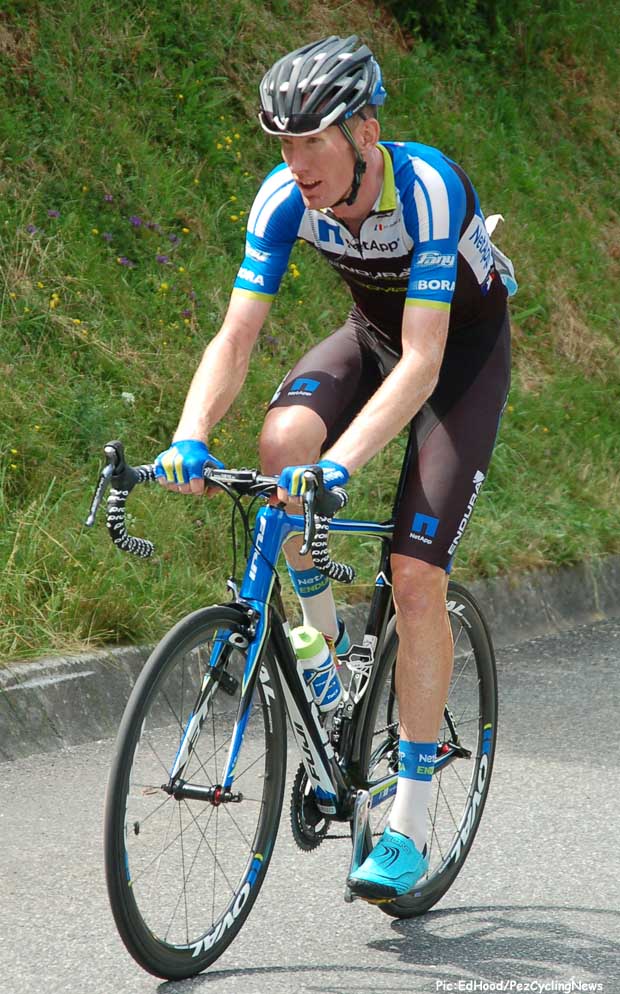 Another man we interviewed on the rest day appears, Zak Dempster, in his own little world – but he’s been doing a job for team mate Leo Konig who’s riding a great race and is up to seventh. 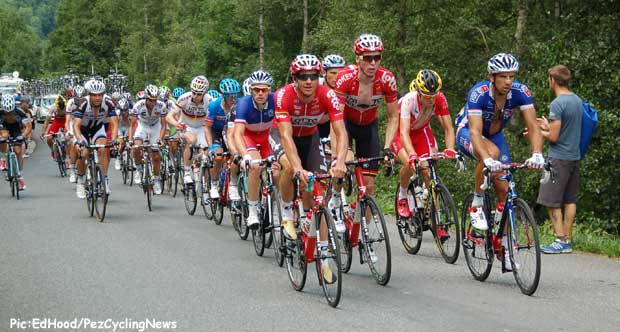 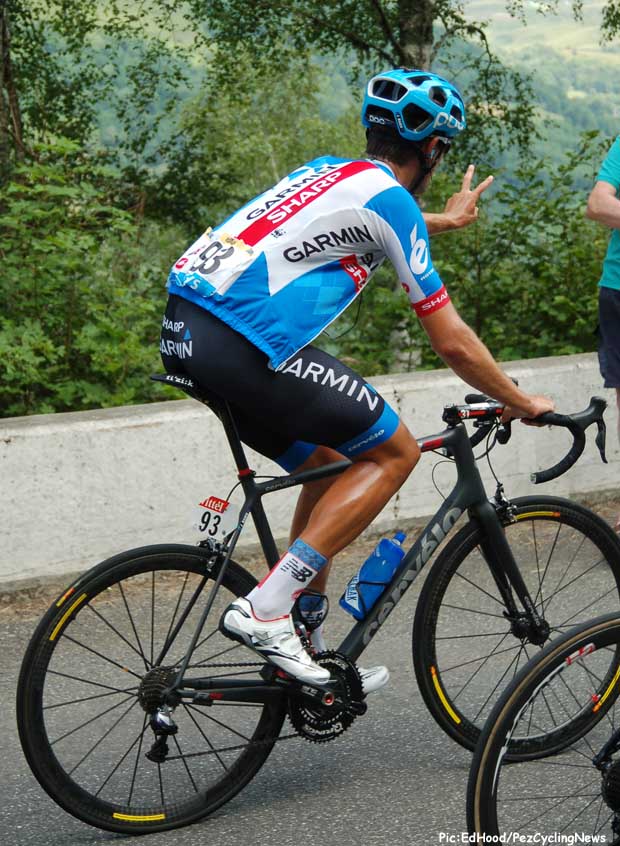 There’s no one behind the gruppetto, today and the Fin de Course van tells us that we can bolt – we make good time of the hill.

The PEZ car is on the grass in around five seconds and we have a beer within a minute – perfect.

Majka wins, Nibali and Pinot consolidate, Peraud raises himself to be a serious challenger for second spot and Valverde worries – what a Tour.

The best in years – last day in the Montagne tomorrow, see you there.