Roadside: The Tour has been over for a week and as the dust settles in Paris our man Ed Hood is back home to ‘normality’ with his French memories. From Carcassonne to Paris, through the Pyrenees and up to the ‘La Ville-Lumière’; here are Ed’s twenty-one top favourites from this year’s French adventure.

According to the bible, the number 21 signifies perfection by excellence; here are our 21 favourite takes on the 2014 Tour de France. 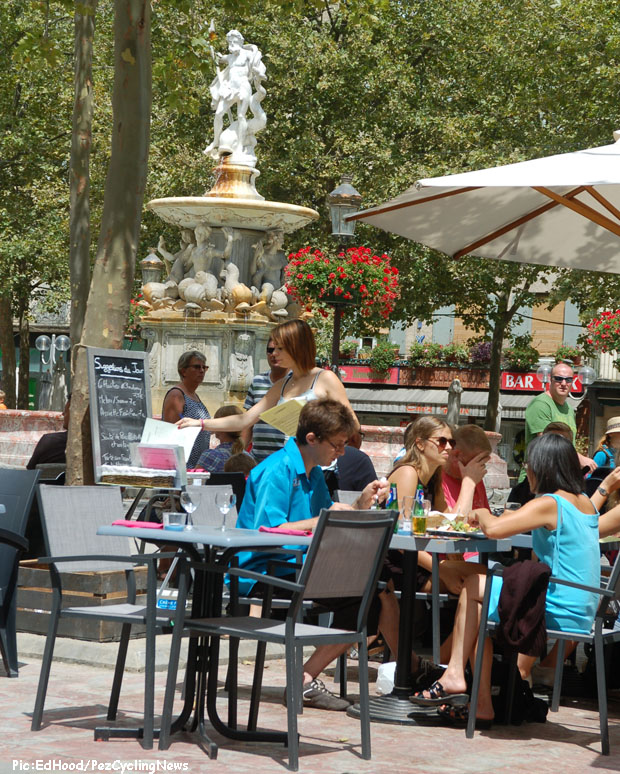 We arrived in Carcassonne on the day of stage 15, some 24 hours before we were due to pick the race up ‘officially’ on the rest day.

It took us about five minutes to drop into that relaxed Midi vibe and remember why the French seem so much better at living life than we do in the north. 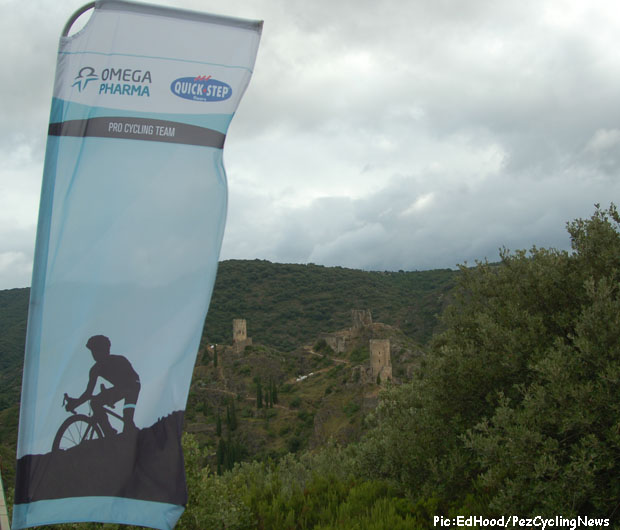 Mission number one on the rest day was to attend the Quick-Step ‘moules fete’ – yeah, it’s a dirty job but someone’s gotta do it.

What strikes you about Quick-Step is how everything is done 100% – the venue was stunning with the podium backdrop a medieval fortress, no hotel car parks for Mr. Lefevre & Co. Cav crashing out on Stage One was a disaster but the team turned it round and delivered a magnificent Tour to their sponsors – ‘chapeau!’ 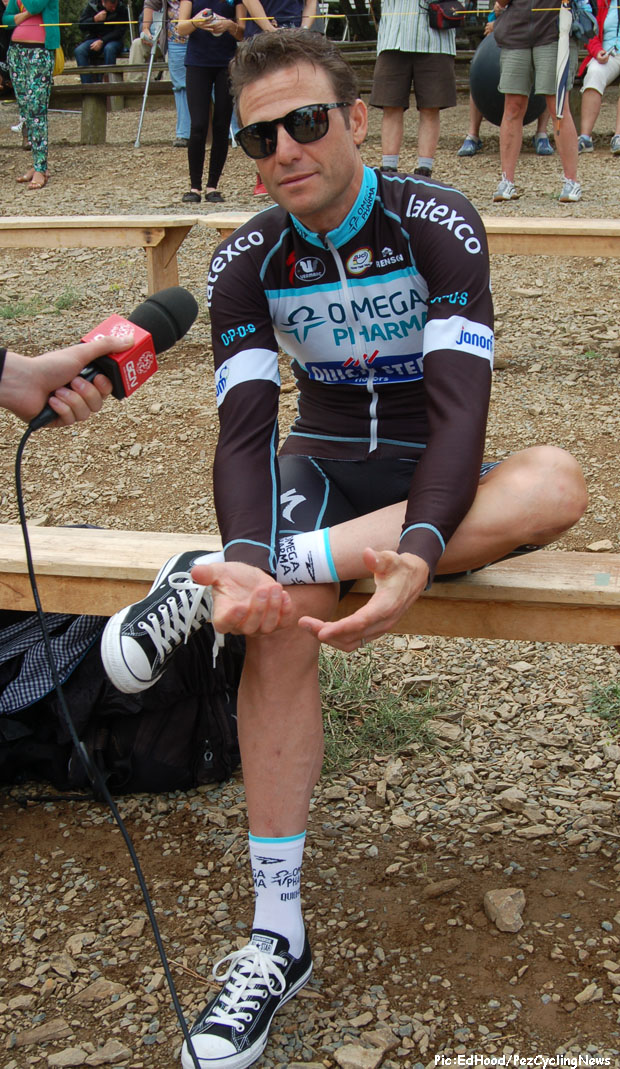 If he was any cooler there would be icicles on his nose; tall, dark, handsome, laid back – ‘Ale Jet’ Petacchi has been at the top for what seems like forever.

You can tell the PR thing isn’t his scene but it’s part of the job and he goes about it with dignity and calm – the coolest. 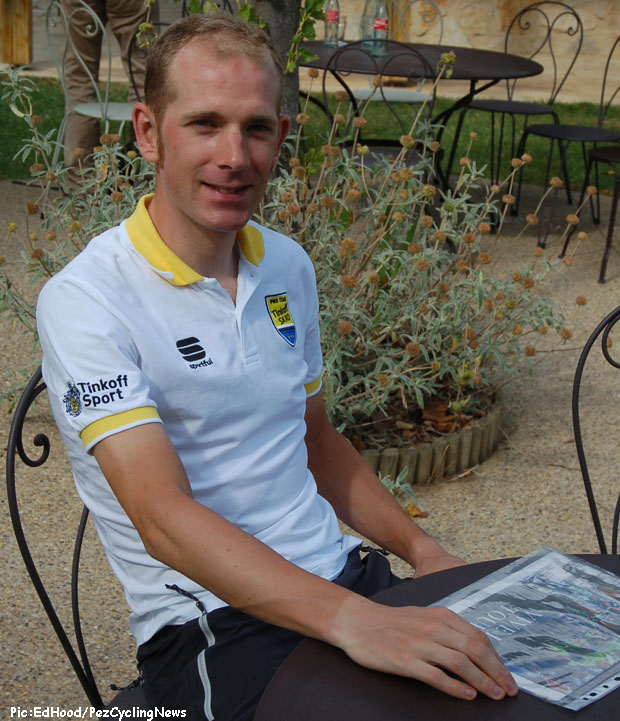 It’s stating the obvious to say that not just anyone can ride on Alberto Contador’s Tour team.

And as part of a Tinkoff team which came back from the lowest of lows – when their Captain, Alberto Contador crashed out – to win three stages and the King of the Mountains he deserves another, ‘chapeau!’ 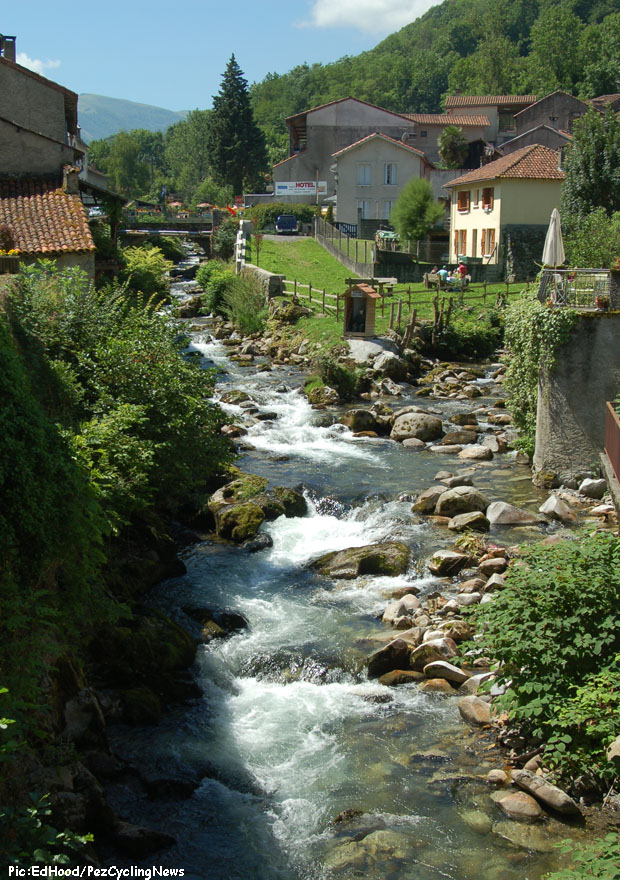 France really is a beautiful country with the ability to constantly surprise and uplift you – we turned a corner and here was this beautiful stream. 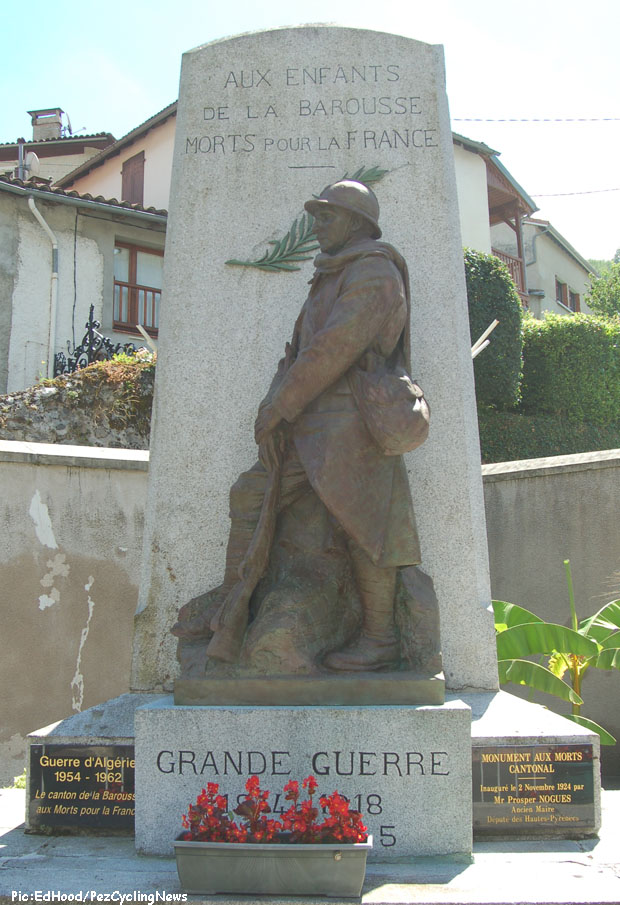 One of the things which remind me of Scotland about France is the war memorials.

No matter how small or remote the community there’s a reminder of the young men who were packed off to some distant part of the globe to fight and die for reasons they didn’t understand. Whilst Britain realised soon after World War Two that the game was up as far as ‘days of Empire,’ the French clung on much longer, fighting bitter colonial wars in Indo-China and North Africa.

I consider myself fortunate to have been born one of a generation who missed such conflagrations. 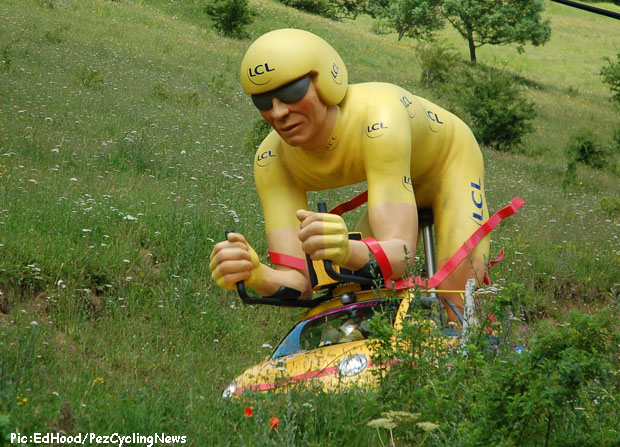 I should hate it but I can’t. The caravan fascinates me – the Tour’s version of the oldest selling technique there is; take the product to the customer and throw samples straight into their hands. Add the great imagination of the vehicle designers, good music, pretty girls and the beauty of France and you have a unique concept. 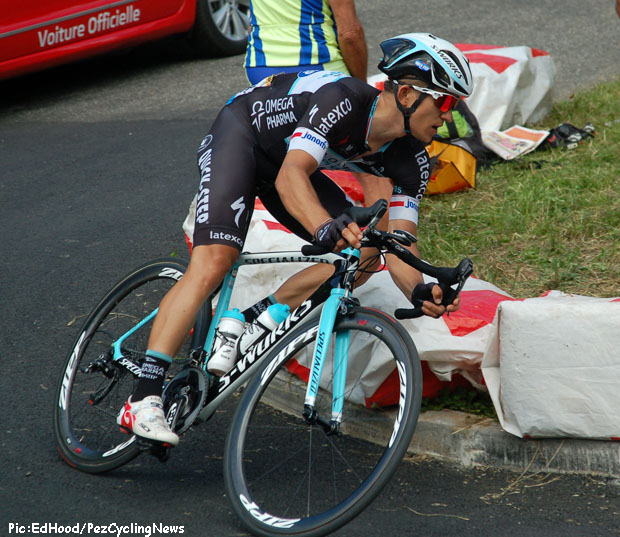 You only think you can handle a bicycle until you watch professional cyclists in action.

On stage 16 we decided to take in a descent – something we’ve never done before. The hairpin we choose was tricky; 180 degrees on hot tar but not one rider got it wrong – albeit Tejay & Co. were on the very edge as they tried to limit the tall American’s losses. 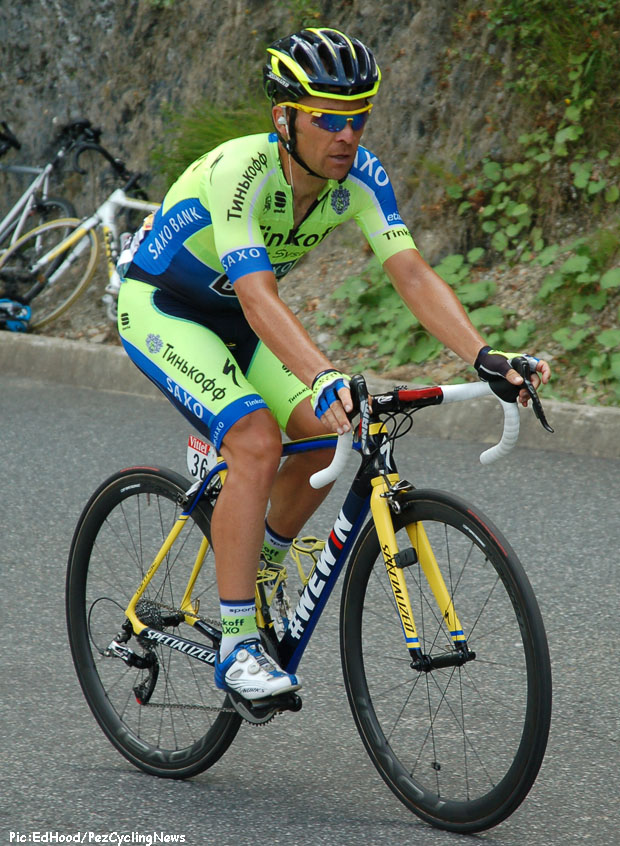 ‘WeWin’ it says on the Tinkoff Specialized’s – to start with, it looked like they wouldn’t as a year of Alberto Contador’s life slipped down the drain before their eyes. But bounce back they did; and win they did – respect. 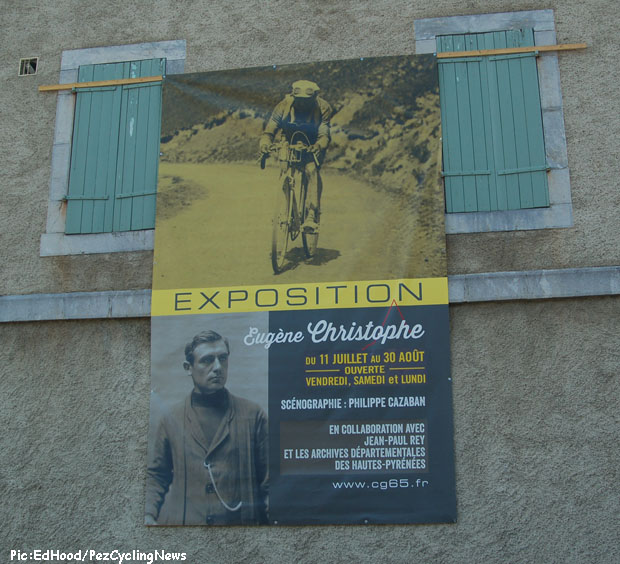 In Britain we have a man called Brian Robinson, he was the first English speaker to win a Tour stage and to stand on the podium of a Classic, Milan-Sanremo – and he won the Dauphine. But it took the Tour de France to visit Yorkshire before us Brits ‘discovered’ Brian. There are no such over sights in France and heroes from 100 years ago are well remembered and honoured. 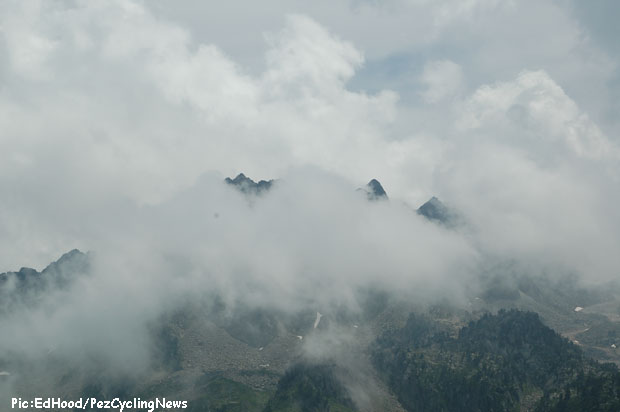 Le Col du Tourmalet, one of the first climbs you read about as a starry eyed youngster discovering the sport.
Reality doesn’t disappoint, I’ve been over it on more than one occasion now and it never disappoints. The fans are high on the occasion and thin air; the coureurs are glassy eyed and long for that cleft in the skyline which signals the top and the long, long not too technical drop off the summit. The views are stunning, the earth’s crust is torn and folded and the weather can turn on you in seconds – a magnificent, savage, other worldly place. 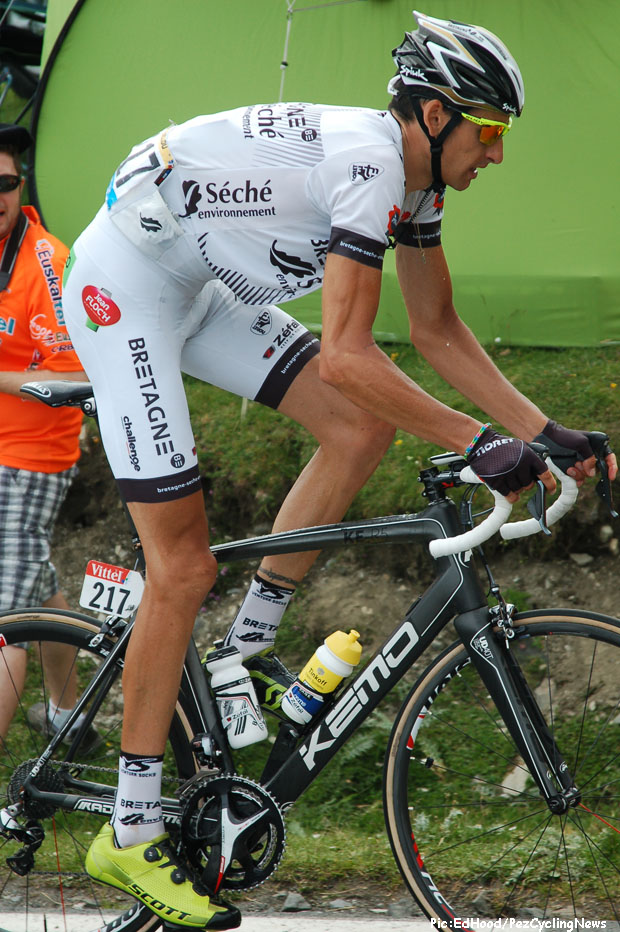 Sure it’s about winning, companies don’t sink millions in to Pro Tour teams not to win – but there’s more to it than that. Androni manager Gianni Savio calls it’ ‘honouring the race’ – you don’t merely hide and survive. You show the colours and worry about tomorrow when it comes. ‘Chapeau!’ to Bretagne-Seche, they certainly honoured this race. 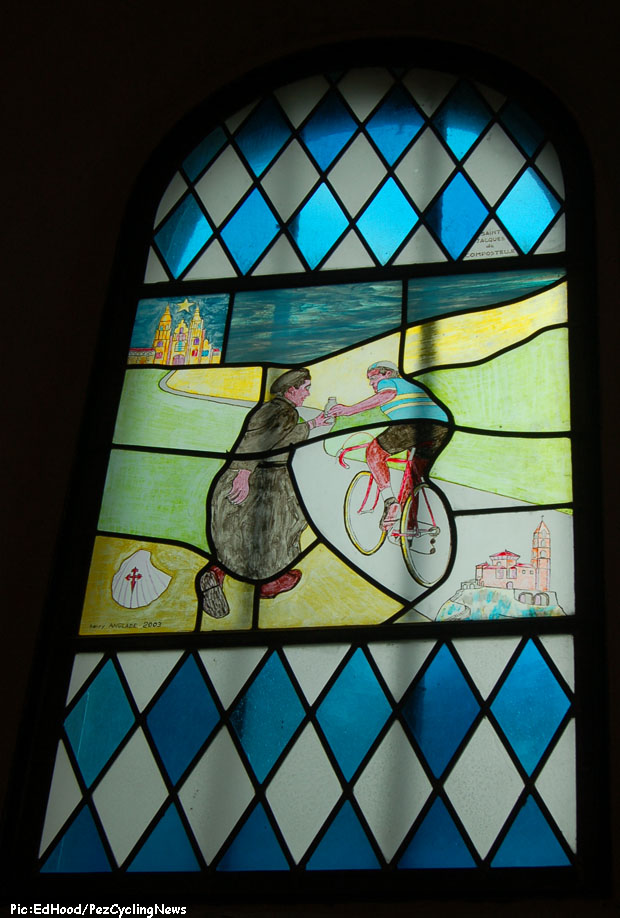 On the sprinter stage to Bergerac we took a detour to Bastide d’Armagnac and the ‘cyclists’ chapel. We were there to honour Luis Ocaña; but were fascinated by the stained glass windows, made by former French Professional Champion, Henri Anglade. There’s one of Ocaña – but also one of Anglade himself, pedalling the pilgrimage route, the Way of Saint James to Santiago de Compostella in northern Spain; he explains it like this;

‘Ever since I was really tiny, I have always admired stained-glass windows. When I was a choir boy, I couldn’t follow the Mass because I was in ecstasy in front of a window. Somehow I had it in my skin. Five years ago I went to a demonstration of how the windows were made and I flipped. I signed on for more. I made a window of the Virgin, which I gave to Father Massié for the 40th anniversary of the Notre Dame des Cyclistes at La Bastide d’Armagnac. I was really proud and happy.’ 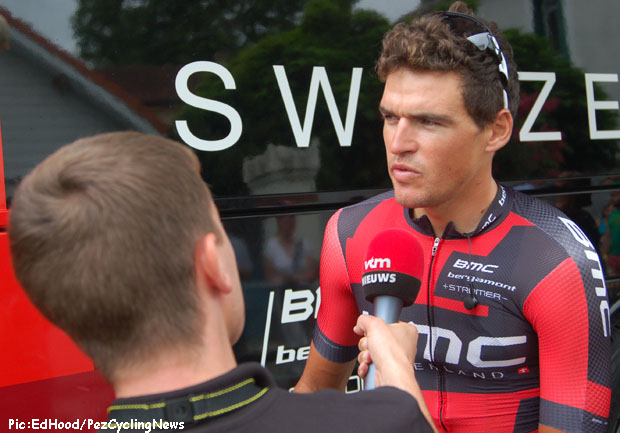 It seems that if you don’t Tweet, swear, FaceBook, subscribe to sound bite culture and/or say funny things then you’re boring. Greg Van Avermaet doesn’t smile a lot but he does tell it like it is and if it’s possible for him to be there – he will be. A real pro, old school, we like that. 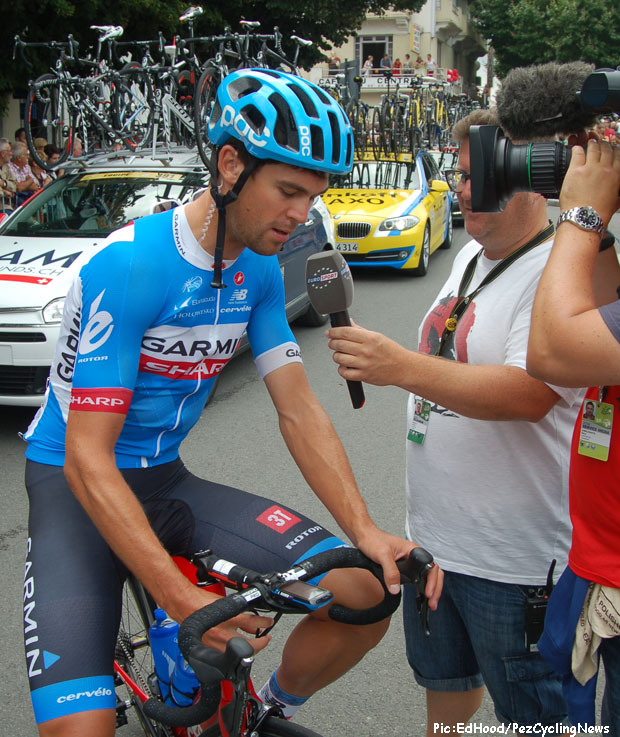 One of the real good guys, Kiwi, Jack Bauer has never forgotten his roots in the Belgian kermises and still goes back to Gent to visit those who helped on the way up. Tears were close for us when he was overhauled in those dying metres of stage 15 . . . 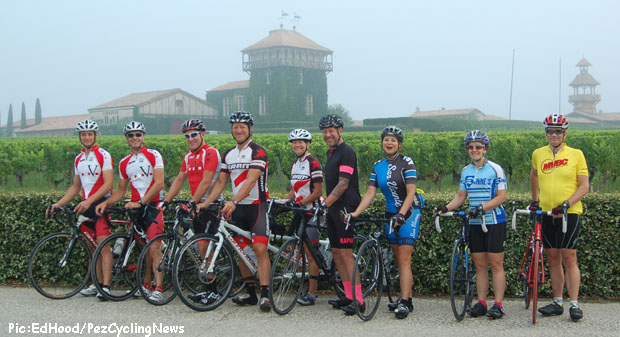 Usually our digs are basic – and as long as they’re clean, quiet and the breakfast is good then that’s all we ask. And good wi-fi, please!

But when we hook up with Chris Gutowski’s VeloSport Vacations, well . . .

Set in the heart of the finest vineyards of Bordeaux the hotel Chateau Smith Haut Lafitte is out of this world – real ‘lifestyles of the rich and famous’ stuff. And the wi-fi was ok too . . . 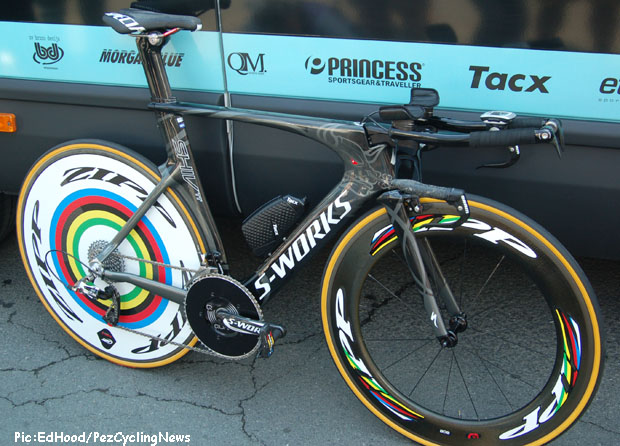 At 59 years-of-age you’d think I’d be too old to drool over pretty bicycles – not a bit of it. Tony Martin’s latest Specialized Shiv comes with ‘Taurus’ charging bull graphics – understated and well executed. The bike of the Tour for me. 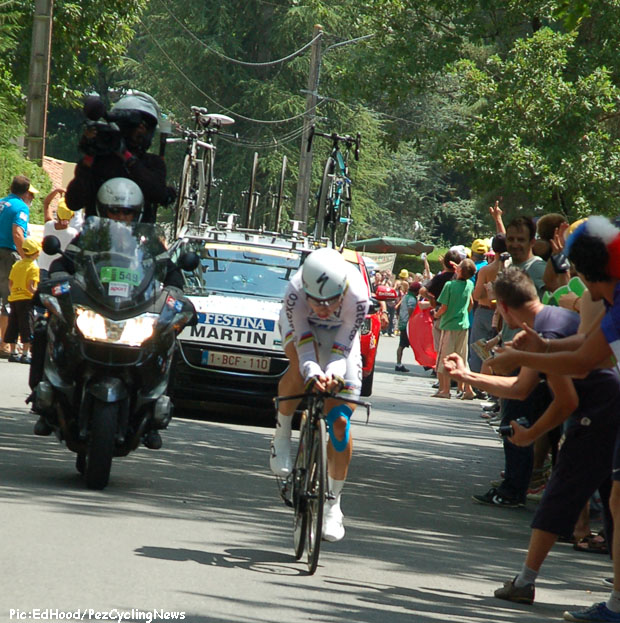 There’s no finer way to watch the Tour than at a time trial – especially if it’s late in the race and it’s all still to play for. Sadly, we had to leave before the last starters hit the road – deadlines, driving, digs to find . . . 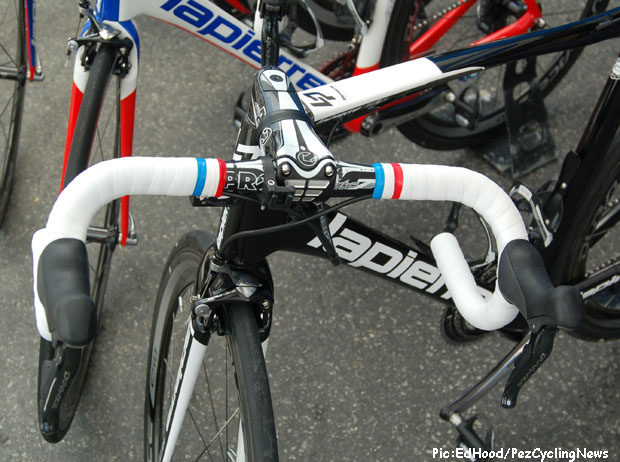 Les Francais: it was great to see Bardet, Coquard, Démare, Peraud, Pinot and Rolland all in the race – not just scrabbling for crumbs. And let’s not forget Warren Barguil for 2015. 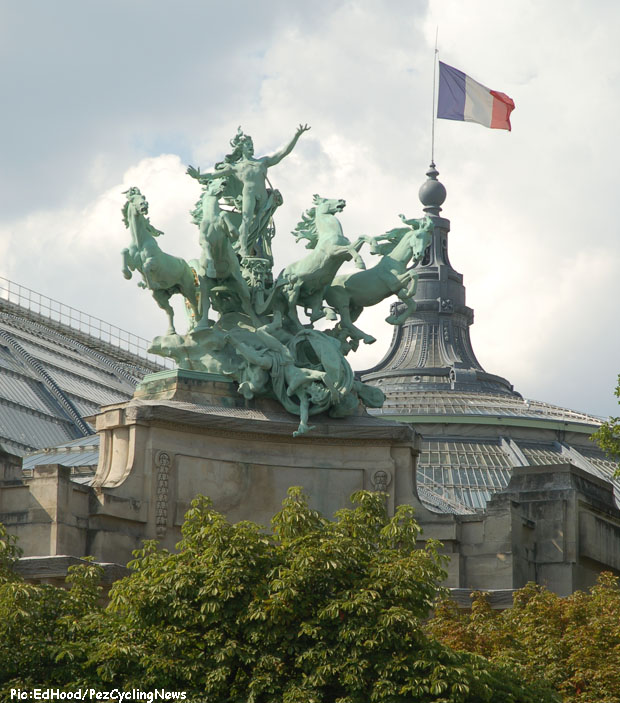 The Giro has still to find a suitable, consistent venue for the grand finale – no such problems in France. The City of Light is the perfect place to climax the world’s biggest bike race – we love it.

And finally, the sound track to le Tour. We still have our Johnny Hallyday fan club memberships; he’s 71 years-old now and still in shades, vest and tight leather pants – respect.

But last year we discovered Claude Francoise on the Radio Nostalgi play list – ‘C’est La Meme Chanson,’ a cover of the Four Tops, ‘Same Old Song.’ This year it was ‘Cette Annee-La’ a cover of the Four Seasons, ‘December 1963.’ Now, when you listen to Claude in your kitchen in Pittsburgh, you’re gonna say; ‘man, that’s cheesey!’

But in the hire car with the sun streaming through the trees, the windows down, the picnickers waving to you and even the gendarmes smiling – it’s simply ‘parfait.’

See you next year?

RusVelo in its first ever UCI World Tour race