Roadside St.7: My starting point for the Vosges & Alps stages of our Tour de France Roadside coverage was the point closest to the Paris airport – today’s stage 7 run from Epernay to Nancy. Here’s what the stage looked like on the ground…

This was our day to get sorted, get our feet on the ground, get connected, and get on Tour baby! It’s been 11 years since my last visit to the greatest race on earth (hard to believe I know) but my excitement has been building for months – ever since real-life events forced me to miss my beloved Giro. But every year, sitting on my couch sipping a cold beer in July and watching the Tour, I wish I was here – so there’s no place I’d rather be for the next 8 stages. 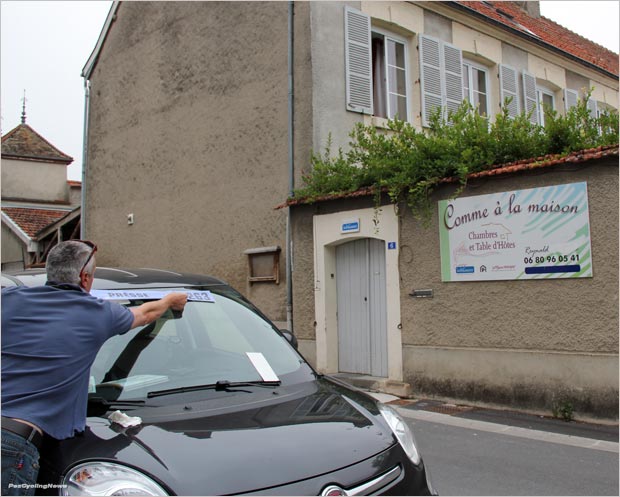 In spite of daunting logistical complications, my trusted friend and driver was there with the car to meet me at the airport in Paris, complete with a brand new Divo bike for me to ride while I’m here (more on this to come), and as my internal clock ticked on over to 24+ hours awake, we aimed east and made our way to Reims for the stage 6 finish. With cycling’s toughest-to-get credentials in hand, we eventually found our hotel in the village of Tours-Sur-Marne (and yes the gps actually made us drive around in a circle) somewhere in the French countryside. 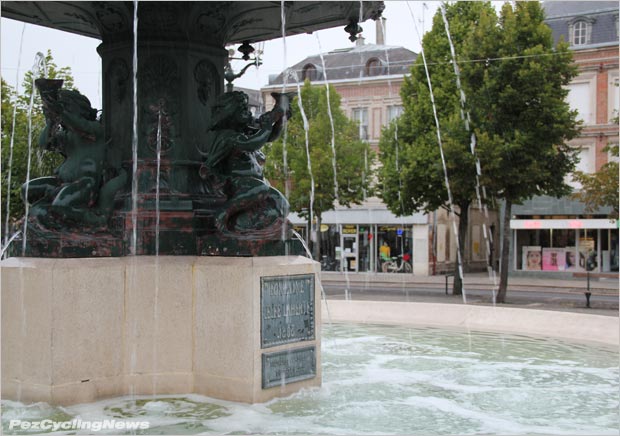 But seeing as we’re deep in the Champagne region, the extra miles in the country looked worthy of the world’s most expensive wines. Job #1 today was sticker-up the car, and head for the start of the Tour’s longest stage – 234 kms from Epernay to Nancy.

The parcours was an almost arrow straight exit from Champagne, heading east to the Vosges region, and with no real plan other than to see what the road served up – we discovered a day of fans, history, and a revealing sense of what this less-than-touristy part of France looks like. 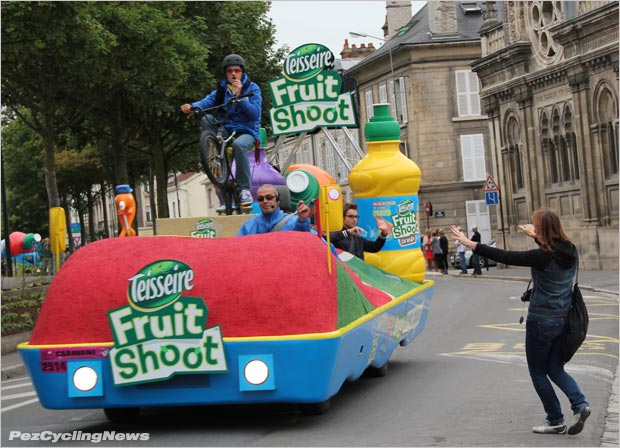 The thing about these small French towns is that they get completely plugged when anything more than a handful of cars pulls into town, and sure enough, battling the great-unwashed on our way to the start took up enough time that getting onto the closed roads ahead of the race was a pleasing prospect.

By the time we cleared the gridlock, the Tour caravan was already pulling out for its day of delivering trinkets, trash, and some unmeasureble level of corporate warm-and-fuzziness to anyone within tossing distance. But the fans love it, and all day long I saw people hoarding their collection of promo items like it was some long lost treasure. 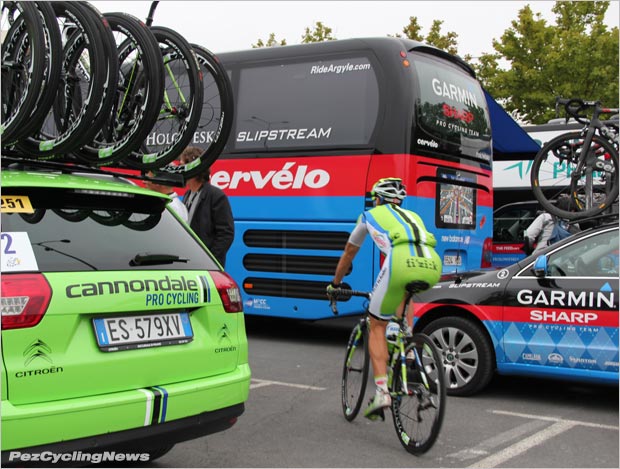 Inside the official start area, I wondered how coincidental was the parking of Teams Cannondale and Garmin right next to each other – given their rumored union for 2015. 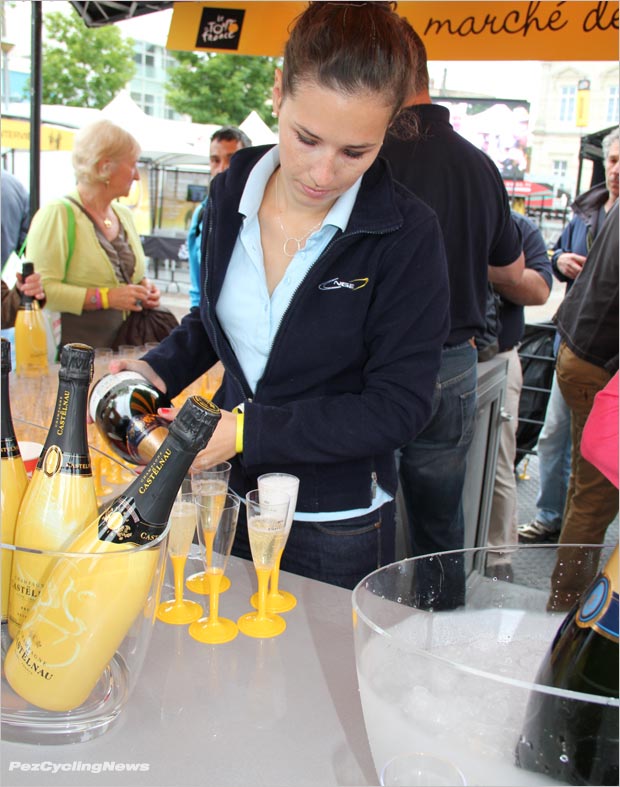 But that lasted only until I found the ‘village depart’, and shortly thereafter the complimetary champagne samples… say what you want about French rules and traditions, this is one civilized way to start the journey. 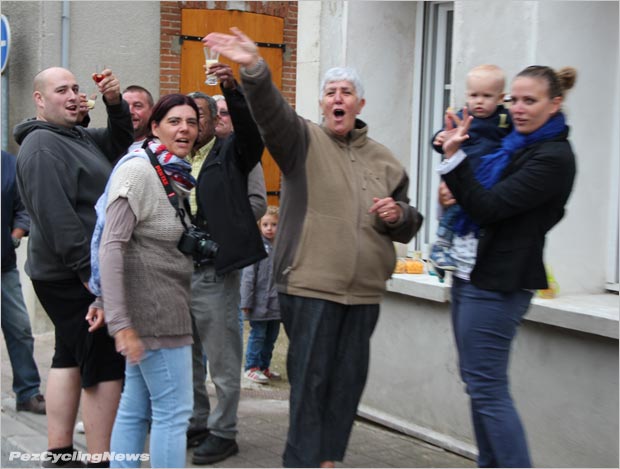 Precisely 30 minutes before the rider’s official roll out, they sound a large bell that signals anyone wanting to drive ahead of the race to hit the road, Jacques. I was curious to see how roadside fan turnout would be – given the record setting crowds we saw last week in England, and also considering the day was overcast and rain was going to fall sometime. These fans in the first town along the route were well into it, and waving and yelling as if we were the riders themselves. 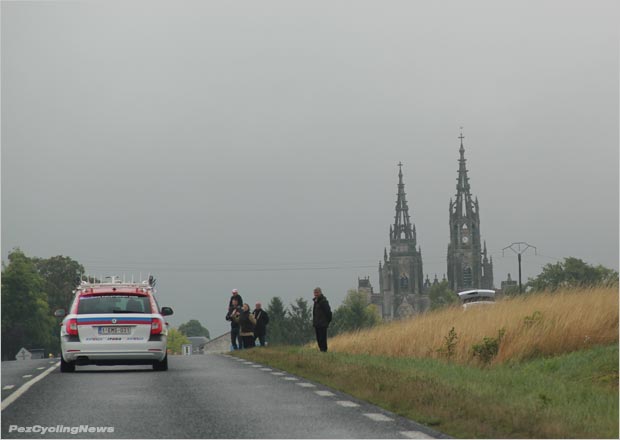 The opening 60 kms were almost dead-straight, and pan flat – my guess for race play was either a very long ‘neutral’ warmup, or a very high pace as the usual jostling to sort out the early break took over. 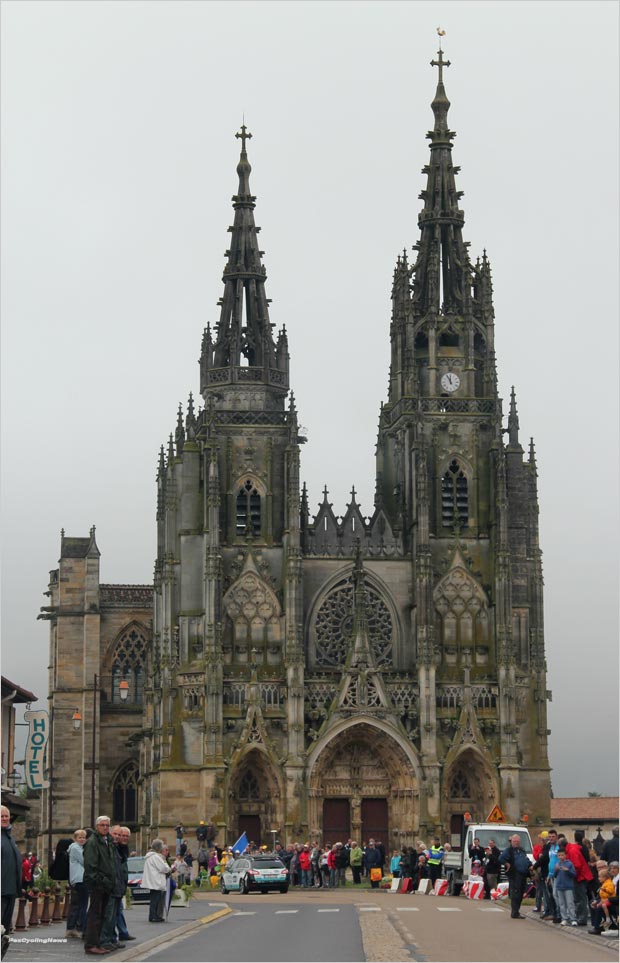 Along with the bubbly, the region is also famous for some of the heaviest fighting in World War I, and I wondered how this old cathedral had escaped complete destruction… 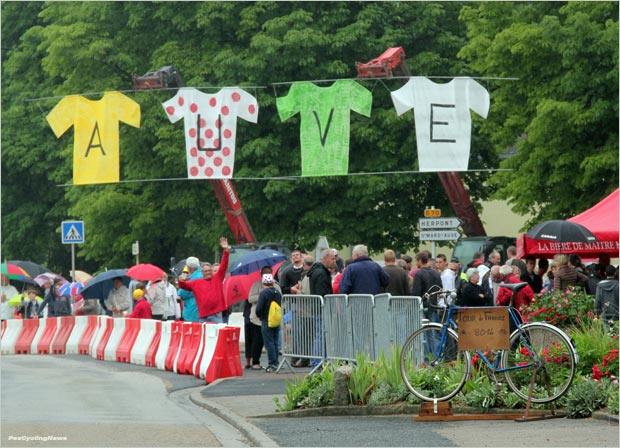 Raucus fan support continued as the kms ticked away, and without exception, every town showed their civic pride in dressing up for being honored by a visit of le Grand Boucle. No two were the same, and I’ll go so far as to say the Italian fans could take a few notes on how spruce things up for next year’s Giro. 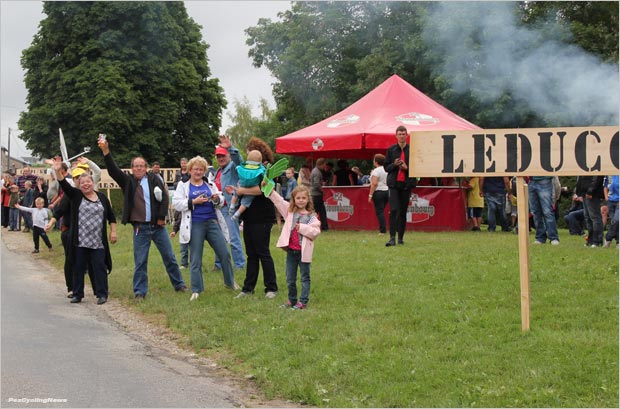 One town had built a series of placards naming every Tour winner from the start to 2013, spaced evenly from one end of the civic limits to the other. Oddly, they’d left out the Armstrong years, and while no record of the 1999 – 2005 winners were planted in this part of the road, I did see a shared posting of Riis & Ulrich… perhaps some personal bias by the sign painter?

Around 70kms in, the flat roads finally showed some life as the ground shifted to rolling hills and gentle curves. Not far ahead was the town of Verdun – where almost a million poeple died in a year long battle in 1916. 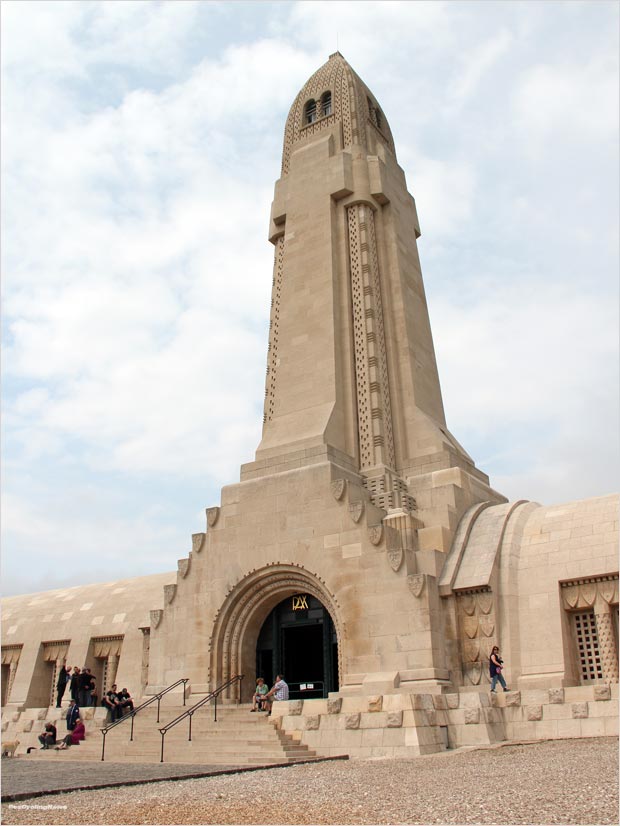 The race passed the Verdun Memorial, one of the biggest and most impressive I’ve seen, but what really stunned me was a few kms further on. The forest floor was heaved to and fro with berms, large swails, and even craters between tall trees. This region took some extremely heavily artillery during the battle, as both sides tried to exterminate the other, what’s left jars the memory than any after the fact memorial ever could. 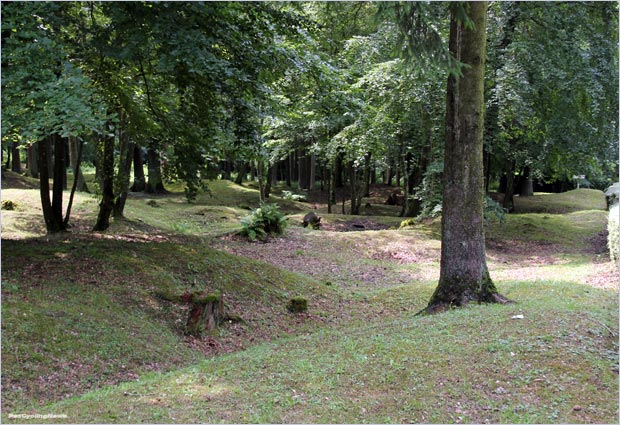 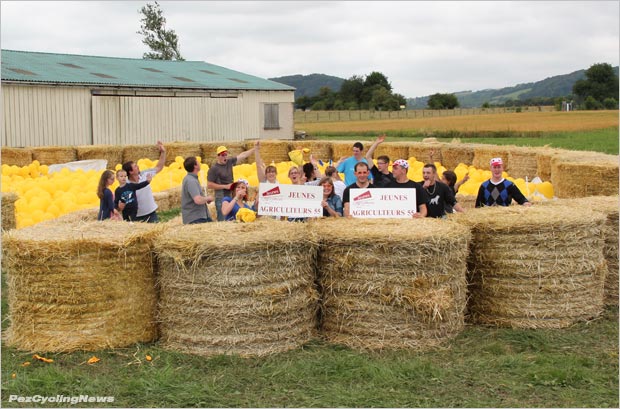 But thank the French fans for knowing how to celebrate what’s good in life. I had to go shoulder to shoulder with a French agricultural reporter for this shot – as the Tour’s visit inspired these young agriculturists to create a memorial of their own – that I imagine made a lot more sense from the helicopter camera – did anyone see this during today’s coverage? 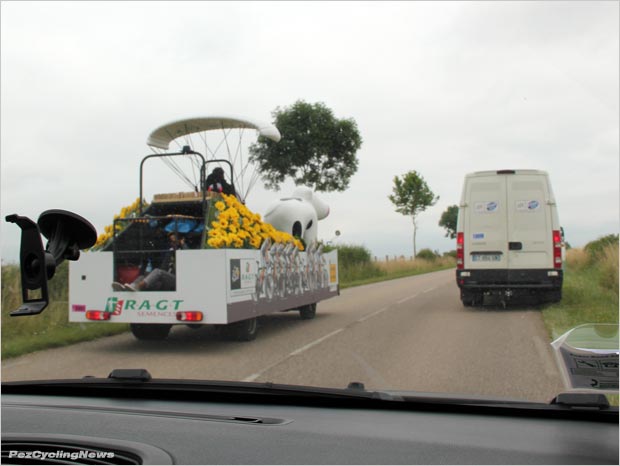 While the race served up its share of crashes today, technical difficulties were not limited to just the riders. The Festina Watch float – that wacky barrel shaped contraption that’s logged thousands of kms driving around France for who-knows how long – kept breaking down – to the point that it was escorted by a police moto trying to pace him back into the caravan, and followed by a huge flatbed mechanic’s truck. The RAGT float had some trouble too – and caused a double-take as they bombed passed us to rejoin the parade. 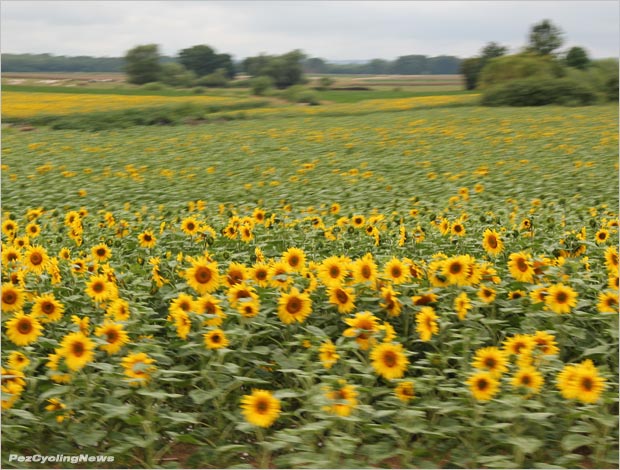 The rain did fall for a while, but eventually lightened up for my first spotting of the flower every Tour fan photograghs. I’ll try for a better shot tomorrow. 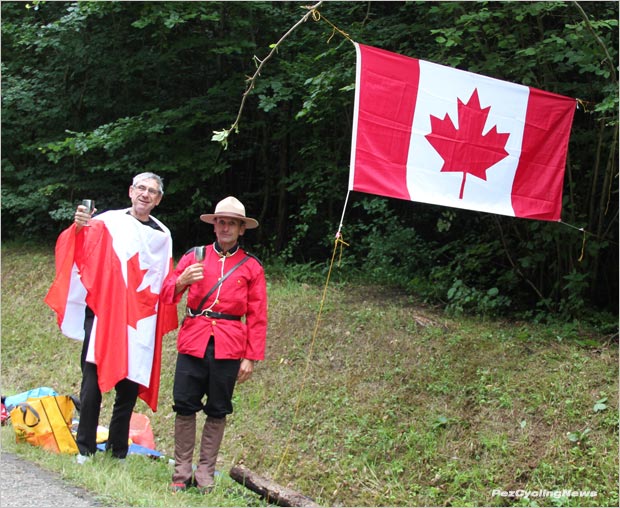 The end of the stage featured two short climbs, the 3.2km 5% Cote de Maron scored a cat. 4 ranking – and collected a lot of fans – including PJ & Rob all the way from – you guessed it – Canada. Great to see some homies out here. 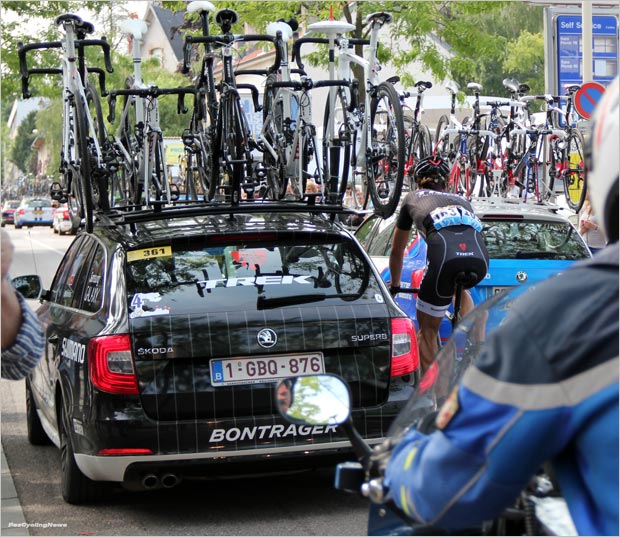 The final hill was the 1300m 7.9% long Cote de Boufflers coming just before the finish. I made it there just in time to see the bunch pass (see a couple of my shots in PeloPics), but what really surprised me was Fabian Cancellara out the back… On a stage where I’d expected to see him at the front, I’ll file this one in the “pics you won’t see too often” file.

So we are underway for my leg of our Roadside coverage – and I’ll call today an easy entry to what’s gonna be some fine stages ahead.

Thanks for reading and tune in tomorrow as I’ll ride the closing km climbs to Gerardmer.
– Pez

RusVelo Bikes Stolen from the Team Base