Roadside Report: From the religious tourist trap of Lourdes to the history of Le Tour and on to to the backstage areas with the buses, tour tech and more – Ed Hood was everywhere today taking it all in. It might have been a rainy day in the South-West of France but it was a great day out roadside at Le Tour. Let’s have a look at Ed’s day through his eyes…

We promised you Lourdes pics, here you go: 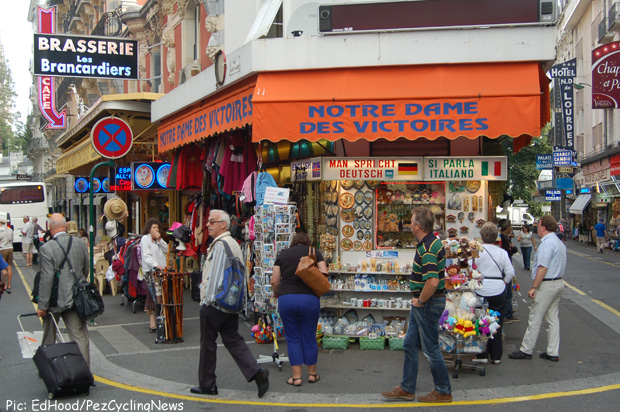 Our hotel, the Christina was dandy – clean, friendly and with a great breakfast but the town, well . . .

We decided today was the day to work a start, so off we headed to Maubourguet, an hour north of Lourdes. 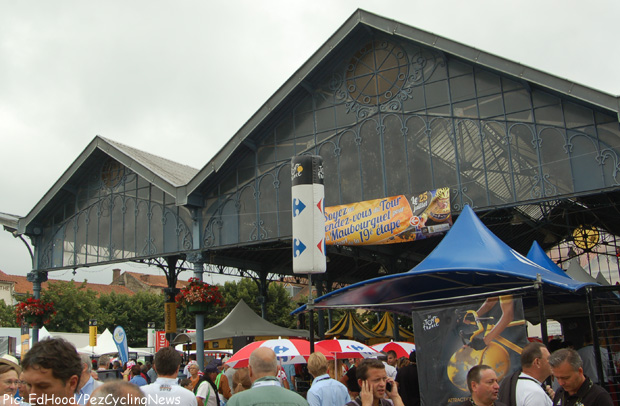 The Tour Village was set up in the town’s lovely old cast iron framed market place – the vibe was just right. 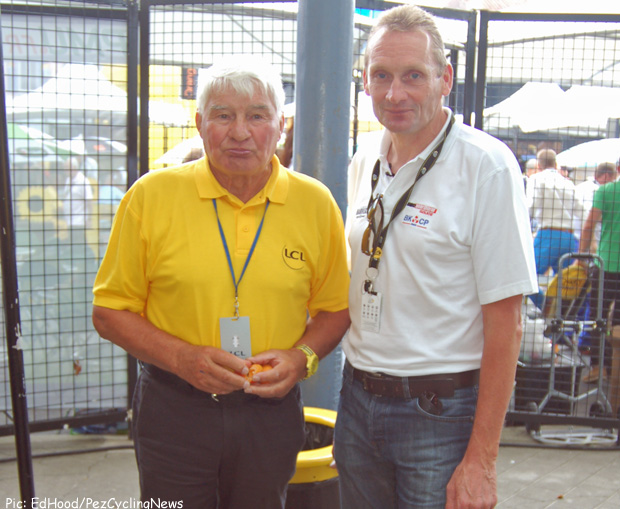 And there was PouPou, Raymond Poulidor; a living symbol of le Tour – the ‘eternal second’ never able to get the better of rival, Jacques Anquetil. ‘Maitre Jacques’ is long gone to that criterium in the Sky but Poulidor is omnipresent. Son-in-law and former ‘cross and Classics king, Adrie Van Der Poel was also there. 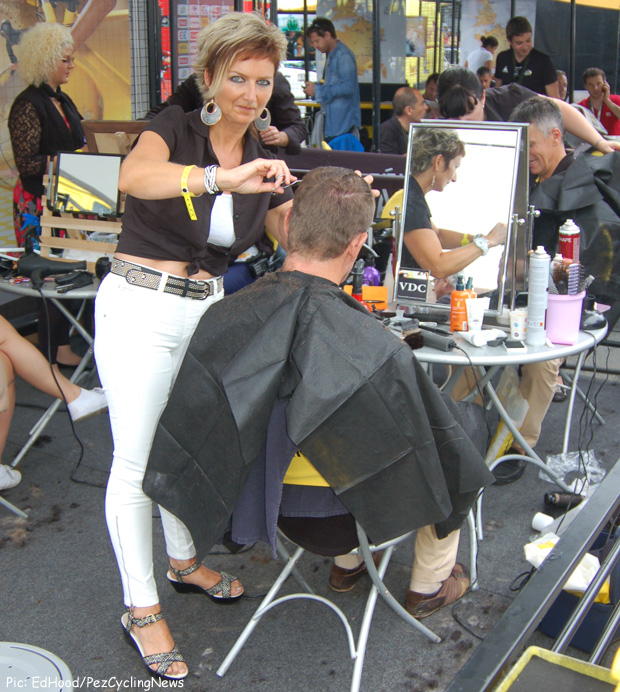 And there’s been a revival of a Tour Village staple that used to pull the photogs but hasn’t been seen for years – the hairdressers. The ladies on duty were, as is their way, immaculate. 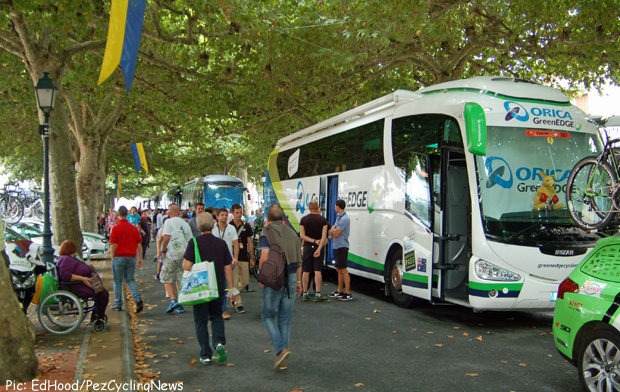 The team buses were lined up along the town’s leafy main street, cool in the midday heat and perfect for photo hunters like us. 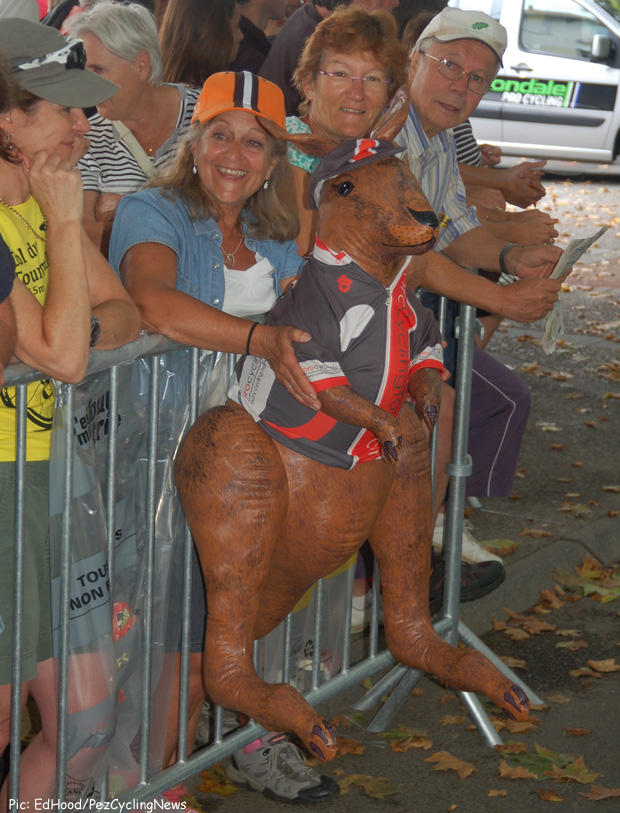 And there’s the inevitable kangaroo – or is it a wallaby ? Answers on a postcard, please. 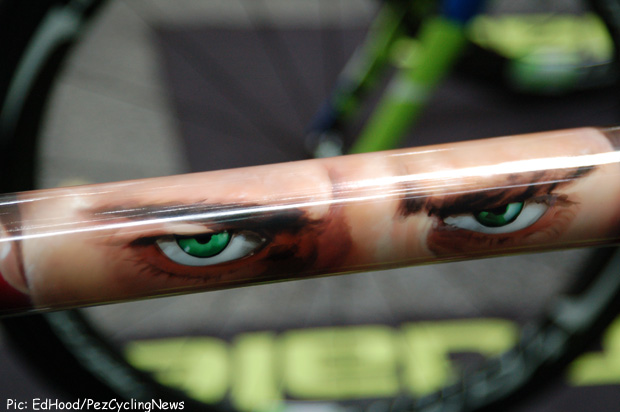 We had the feeling we were being watched – but it was just Peter Sagan and his spray job. He may be a wolverine; but there other creatures in the peloton . . . 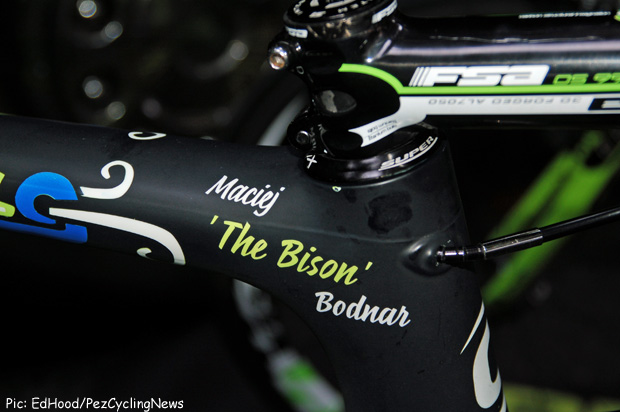 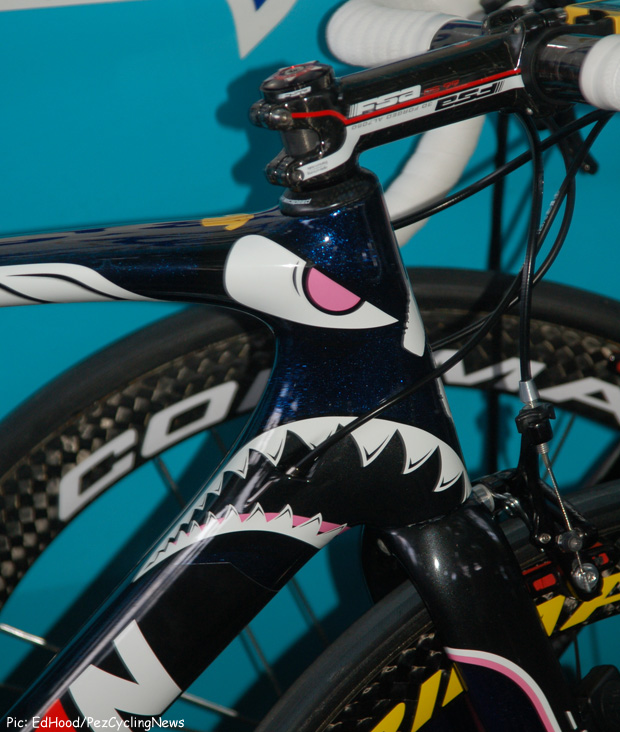 And we like Vincenzo’s Specialized spray job – we don’t have to tell you what it is . . . 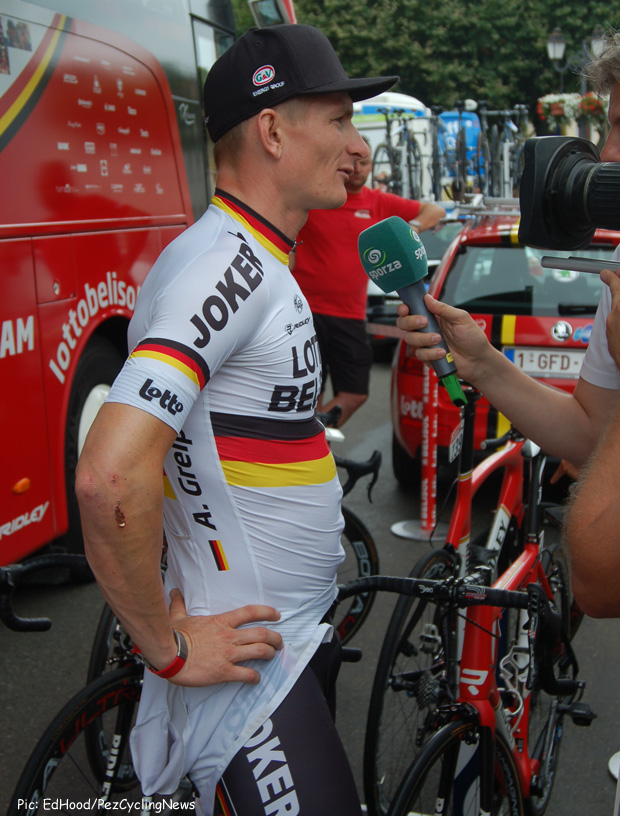 The race’s real live Gorilla looked in good shape, this morning – ignoring the scabs peeling from his elbows. Few riders have not been on the deck in this Tour. 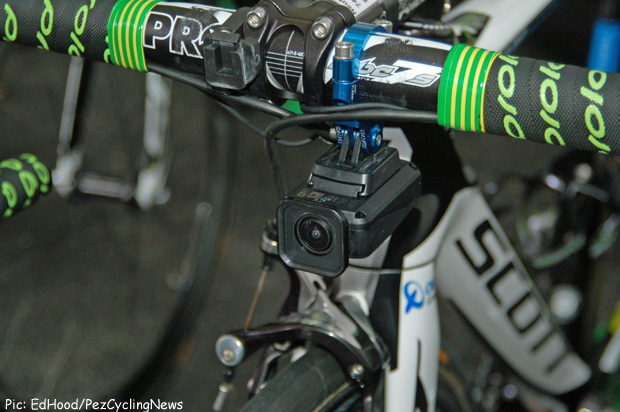 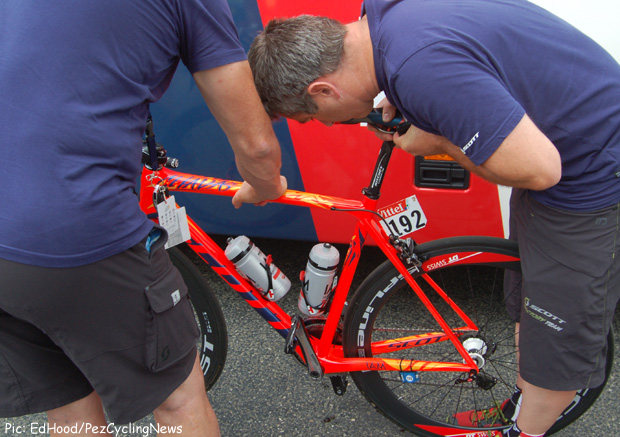 And on the subject of mechanics, even vastly experienced riders like Chava want last minute adjustments made. 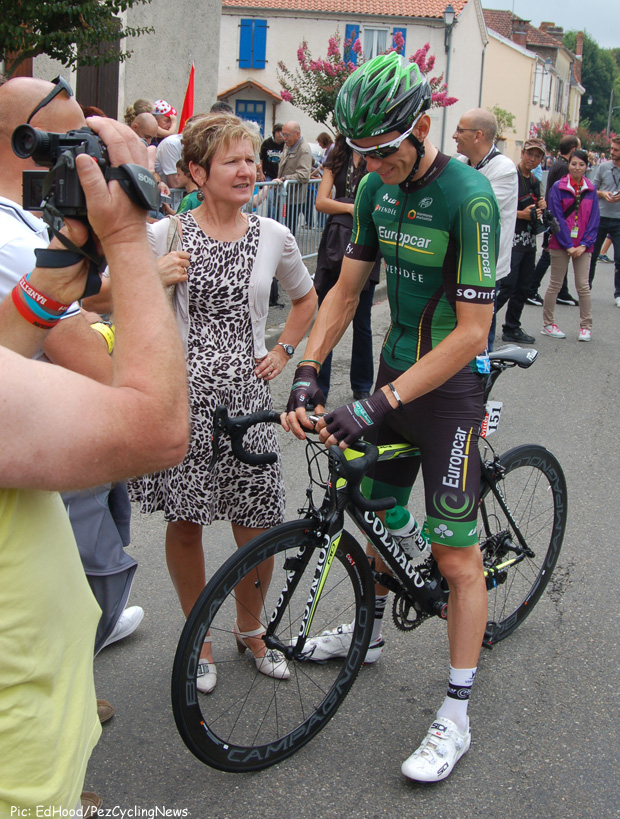 Home fave Pierre Rolland checks his computer and front tyre as he chats to friends. 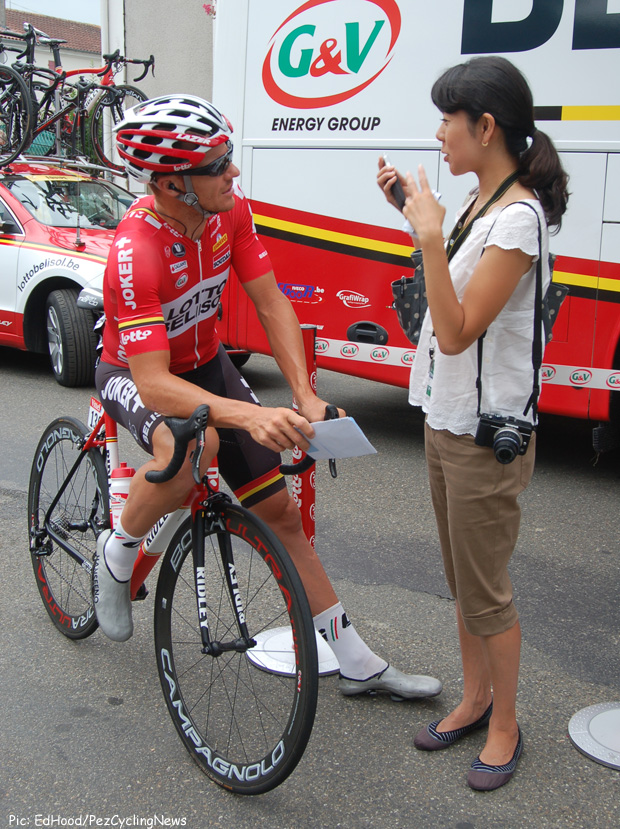 Adam Hansen, meanwhile is being interviewed by a rather cute Japanese journo and doesn’t notice us as we pass – strange that . . . 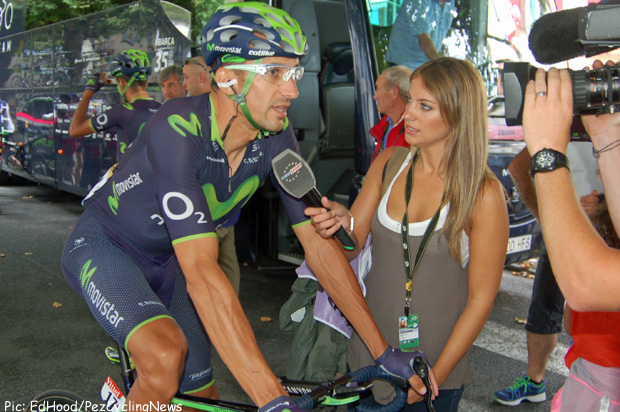 Rubens Plaza is interviewed for Spanish TV, a highly respected rider, people listen when he speaks. 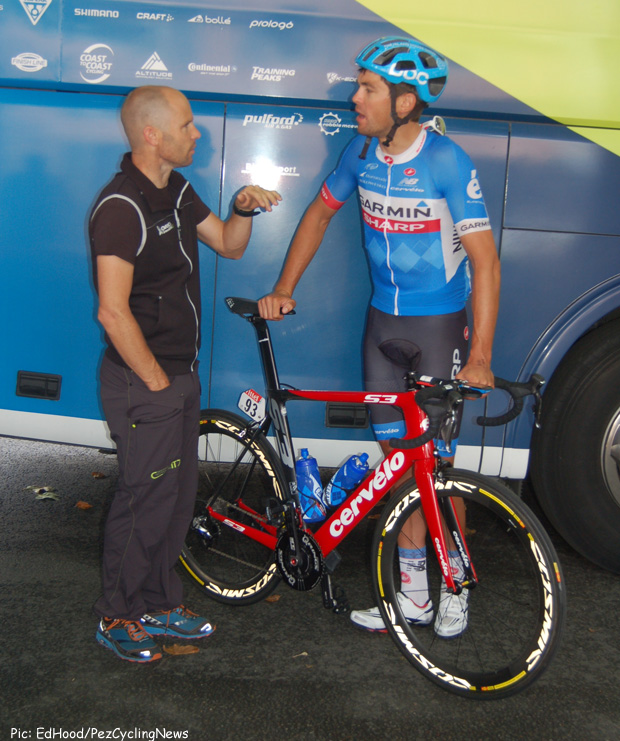 Our boy Jack Bauer confers with fellow Kiwi and GreenEdge mechanic, Craig Geater about the Commonwealth Games Road Race; Craig will manage the team and Jack’s out to win the road race – you heard it here first. 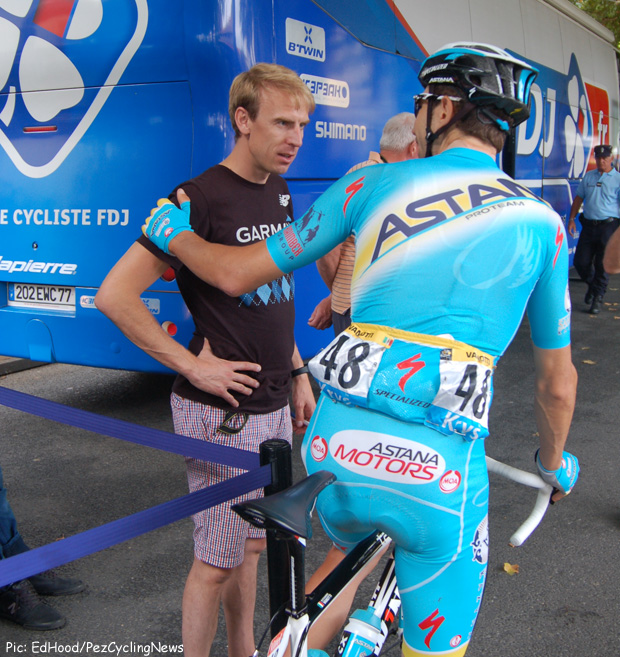 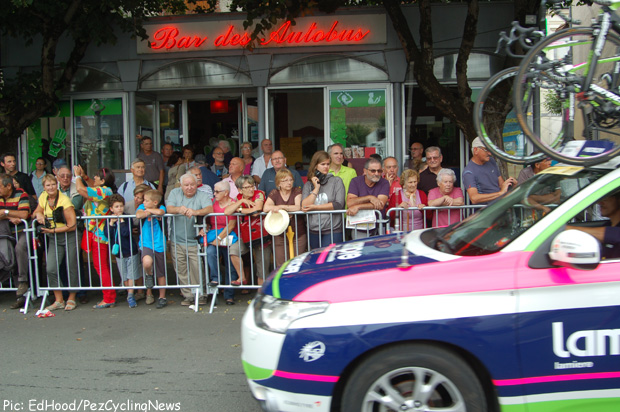 Roll out time – and even the bar at the start is appropriately named . . .

But there two parts to this day as we head north . . .

Coming from the stage start we’ve missed the morning window but it’s only 40 minutes until 15:00 – we’ve come here to pay homage to Luis Ocana and for the sake of 40 minutes, we’re not going to miss the chance. Lunch is the answer, on the beautiful old square at Bastide d’Armagnac. 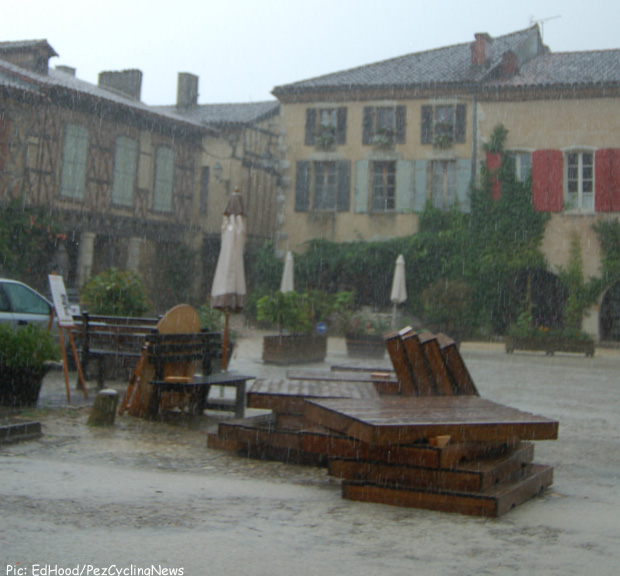 As we sit down the sky opens and it rains like I’ve rarely seen before; lightning sears across the sky and thunder roars above the square as water pours off the roofs like waterfalls. 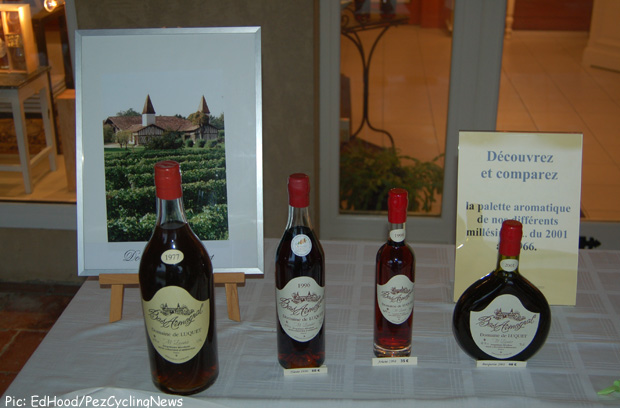 As we wait for lunch we check out the beautiful armagnacs on display in the merchants next to the restaurant.

When Ocana retired from the bike he sank his money into vineyards around his home in nearby Mont-de-Marsan with the intention of producing fine armagnacs – but the bad luck which dogged him all his life made no exception for his vineyards; freak bad weather spoiled his vines for two consecutive seasons.

Perhaps the thunder, lightning and apocalyptic rain was from Luis, reminding us not to forget to mention that day in July 1971 when, with a big lead on Eddy Merckx, he crashed out of le Tour on the descent of the Col de Mente in similar weather conditions.

He would dominate the Tour in 1973 winning time trials and mountain stages with ease; but never got the credit he deserved for the victory because Merckx wasn’t riding – Eddy won the Vuelta (held in the spring back then) and the Giro but didn’t ride le Tour..

Ocana was married in the chapel just outside Labastide d’Armagnac and whilst his funeral service was held here too, there’s no headstone – his ashes being scattered in Spain.

Notre-Dame des Cyclistes was founded by 1959 to honour cyclists who had died and is now a National Sanctuary. 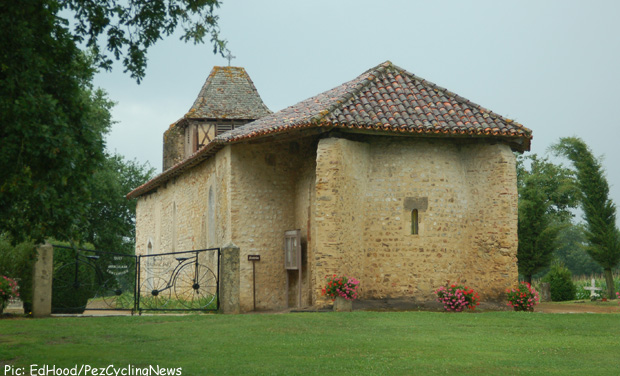 It’s a similar concept to and inspired by the Madonna del Ghisallo chapel but bigger and less cluttered and still very much having a spiritual feel to it, despite the jerseys and photos.

Many current riders have donated jerseys – but there’s no mention of Lance the curator is at pains to tell us – but we’re here to honour Luis. 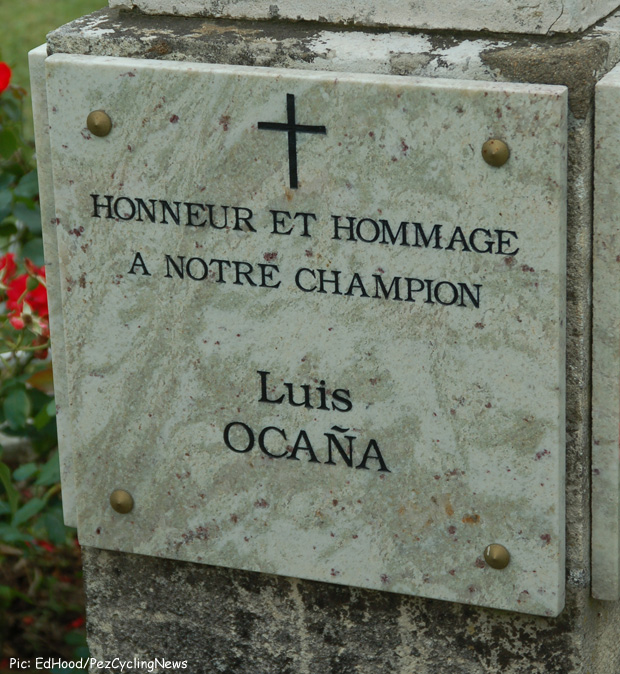 Out in the grounds a marble plaque is dedicated to ‘our’ champion – Spanish or not he was well respected here in this part of France. 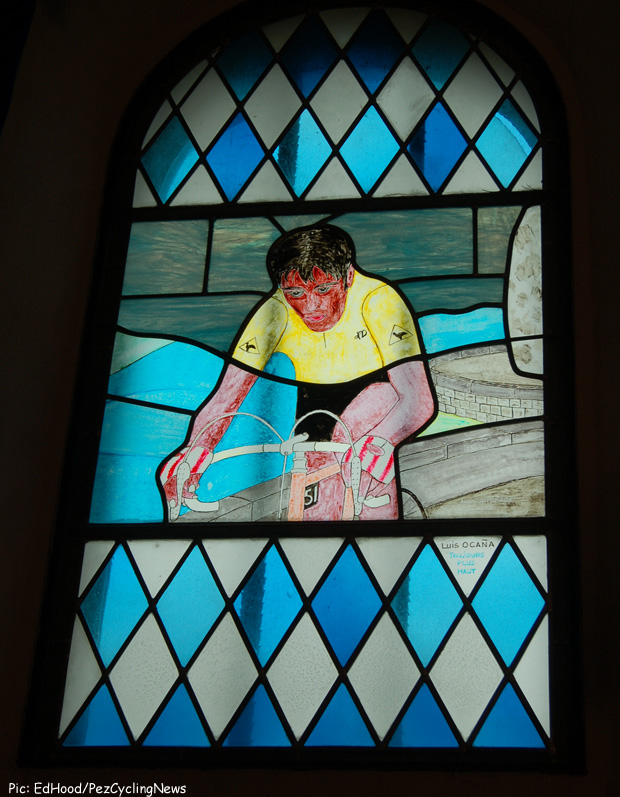 There’s an image of him in the stained glass window which was made by former French Pro Champion, Henri Anglade. 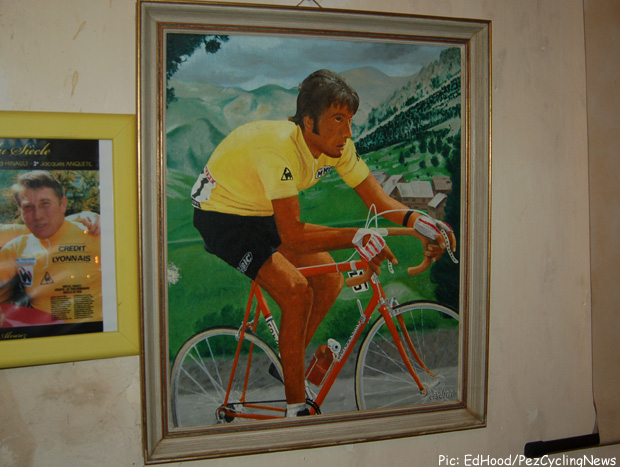 And a painting of the man in his cool Bic jersey on his orange Motobecane. 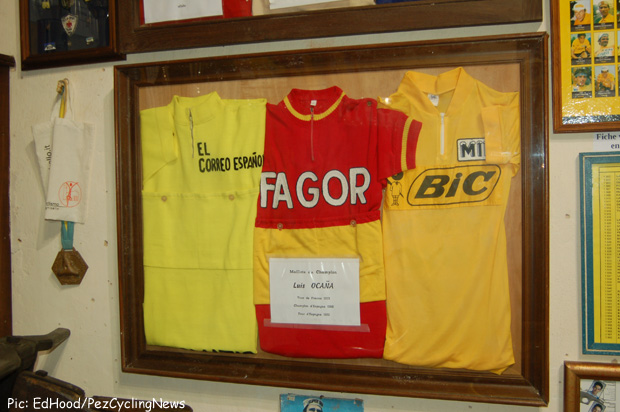 There are also his leaders jerseys from the Tour and Vuelta and one of his Spanish champion’s jerseys. We can’t stay too long, we have a meeting with ASO up at Bergerac about protocol for following a rider in tomorrow’s chrono.

As we leave, the lightning streaks, the thunder clatters and the rain belongs in Cambodia. 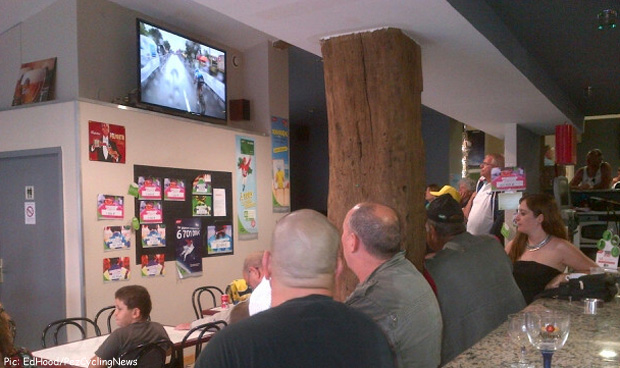 And as we head for our meeting in Bergerac we get that all important bar.

There are just 3.4 K to go – Navardauskas is clear, powering on through the rain. Behind they fall like nine pins as the big Lithuanian storms in to the home straight to make up for Andy Talansky’s retiral and Jack Bauer’s heart break.