Roadside St.15: The Tour’s 2nd week closes with fireworks as the drudgery across the north is forgotten with a few torturous hours on the race’s longest stage to the summit of the feared Mt. Ventoux!

Daniel Mangeas is talking up a storm; ‘the Englishman Christopher Froome in the yellow jersey and the Colombian Nairo Quintana are alone at the head of affairs!’

And then comes the dramatic announcement; ‘Froome attacks, Quintana responds, Froome attacks again, he’s clear, alone on the last 1,200 metres of Mont Ventoux!’ We all crane forward, our spots ain’t the best, despite our creds; but the race is way ahead of schedule and that’s upset our plans.

Our own Chris Selden rode his bike up the beast himself a couple months back, but we’ll just have to do our best with the hire car and a camera… 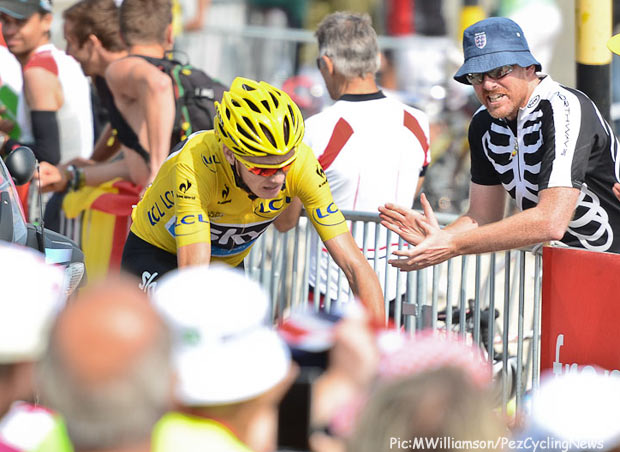 He’ll never win a ‘Prix d’Elegance’ for his climbing style – all elbows, knees and head – but the stick thin Englishman seems to have a supernatural resistance to gravity as he spins a tiny gear into the last left hand hairpin at 800 metres to tackle the final gruesome ramp and then right hander to the observatory finish.

He’s come and gone in an instant.

Quintana next, but the Movistar man’s race is run, there’s no urgency, Froome has cracked him and he’s just riding in as best he can. We predicted Froome or Voeckler for the stage, today – we got it right; but Tommy was way back.

The mercury was headed for 30 degrees when we left Lyon, this morning – there was only one place to be for us, today. ‘The Beast of Provence’ some call it, others the ‘Bald Mountain’ but it’s best known as the ‘Giant of Provence.’ 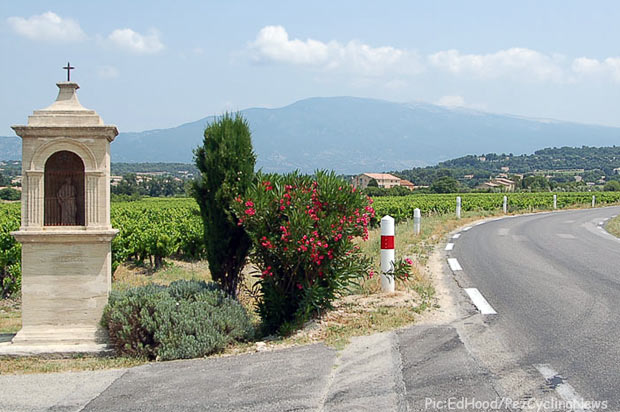 The Rough Guide to France says; “Mont Ventoux, whose outline repeatedly appears upon the horizon from the Rhone and Durance valleys, rises some 20 kilometres east of Vaison. White with snow, black with storm-cloud shadow or reflecting a myriad shades of blue, the barren pebbles of the uppermost 300 metres are like a weathervane for all of western Provence. 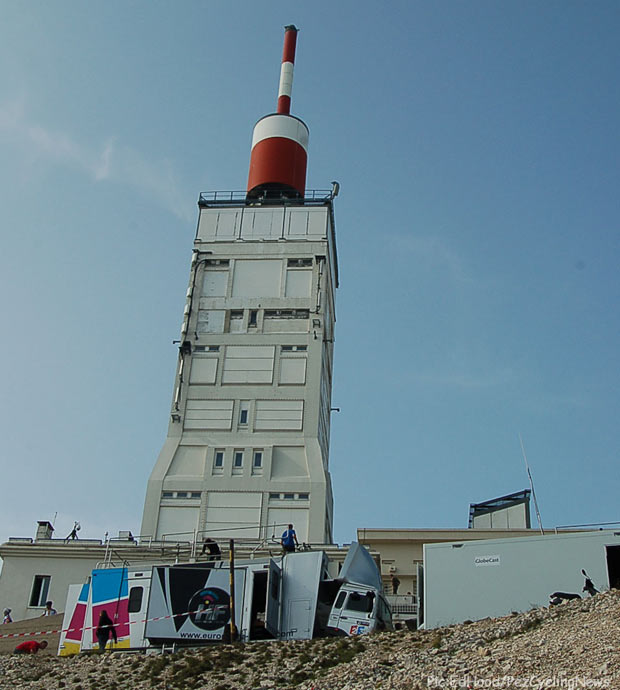 Winds can accelerate to 250 kph around the meteorological, TV and military masts and dishes on the summit, but if you can stand still for a moment the view in all directions is unbelievable.” The ‘Race Bible’ tells us that as the last mountain before the sea, the poet Rene Char described it as, ‘God’s Tomb’ – the book goes on to remind us that the Ventoux has stood there for 95 million years.

The ASO stats for the climb are: 1,912 metres total height; 20.8 kilometres from Bedoin to the summit; average gradient of 7.5%; steepest gradient 10.6% between the seventh and eighth kilometres with a total distance for this 15th stage at 241.5 kilometres.

In the trees on the lower slopes it’s like a sauna, the wind can’t penetrate and the heat builds. But once you clear the tree line it can be like someone opened a furnace door, the sun beats down from on high but the heat also radiates back up off the white limestone.

And then there’s the wind, hot and fierce from Africa on occasion.

This isn’t just ‘any’ climb, it’s Legend and a killer – on July 13th 1967 Britain’s Tom Simpson died on these slopes. His heart unable to cope with the heat, gradient and the alcohol and stimulants in his system. ‘Preparations’ and the odd beer or stiff brandy were all part of the game, back then. Rest in Peace Mr. Tom.

The first time the mountain was traversed in the Tour was 1951 when Apo Lazarides was the leader over the summit in the stage from Montpellier to Avignon. 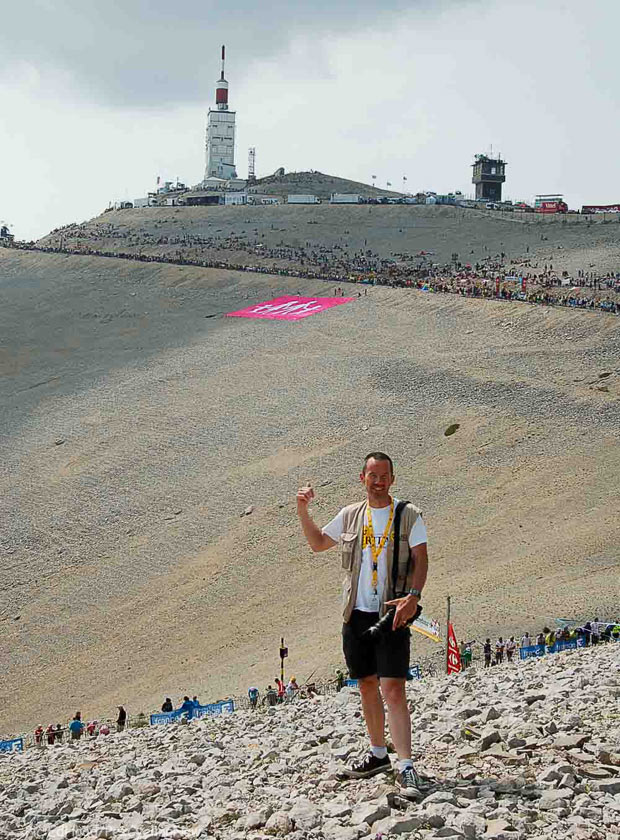 Since then Le Tour has finished at the summit eight times:

• 1958 with ‘Angel of the Mountains’ Charly Gaul (Luxembourg) as winner.
• 1965 saw the Tour’s eternal second, Raymond Poulidor (France) on top of the podium.
• 1970 and Eddy Merckx (Belgium) doffed his cap at the Simpson memorial statue before carrying on to win; but having to receive oxygen after the line.
• 1972 was the year handsome, affable and ever popular French double Tour winner Bernard Thevenet tamed the Giant.
• 1987 saw consumate chrono man Jean Francois (Jeff) Bernard fastest against the watch to the top.
• 2000 was when Marco Pantani was ‘gifted’ the stage by a ‘certain American’ – to the Italian’s disgust, prompting the man from Texas to say, ‘pas de cadeaux’ – ‘no more gifts !’
• 2002 and the man who could have won Le Tour had he used his head as well as his legs, Richard Virenque was first to the top.
• 2009 gave Spain it’s only victory on the mountain with Garate out sprinting Tony Martin for the win.

In total Le Tour has crossed or arrived at le sommet 15 times. It’s 12:45 and the sound of the cicadas is louder than the air-con and Radio Nostalgi put together. 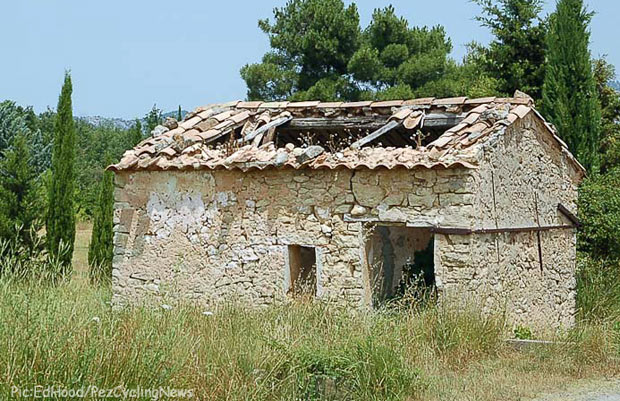 The temperature gauge reads 30 and we’re not far from Bedoin, at the base of the Beast. ‘Daddy Kool’ blasts incongruously from the stereo as we get our first windscreen filling view of le Geant. Vineyards, olive groves, heat, cicadas, dust, old buildings slowly disintegrating in the dry air. 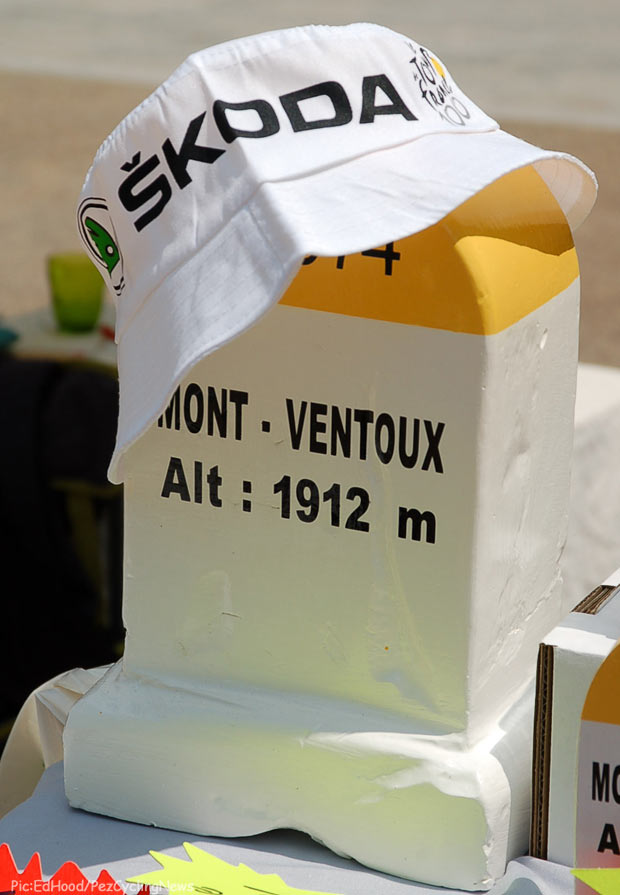 Bedouin, time for a kir; we consider buying a ceramic Ventoux kilometre sign – 12 Euros, too much.

The climb starts straight out of town, gentle at first but stiffening as the ribbon of hot tar winds into the woods. Martin and I were here in 2009 when Garate won and we think the crowds on the lower slopes were bigger, back then. And crazier, we had to lock the car doors as drunken Belgian and Dutch fans tried to get aboard – mad. 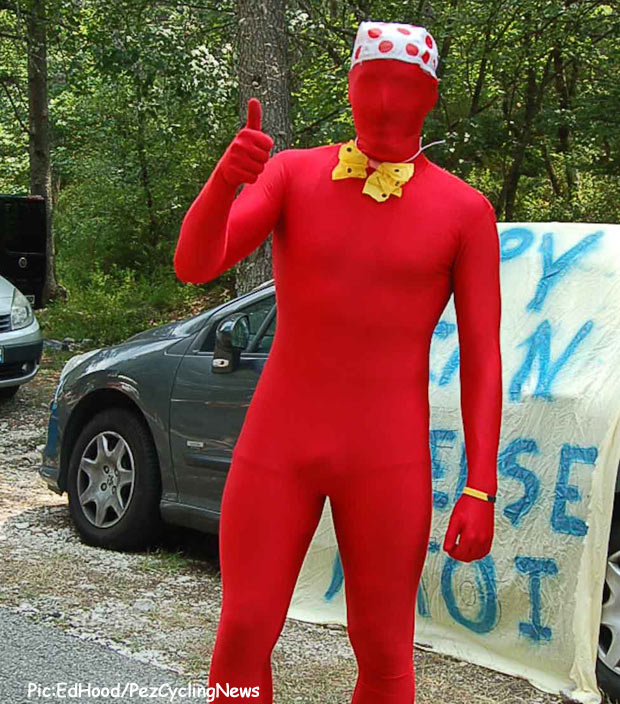 But there are crazies about and you have to photograph them, I think – PEZ’s soothsayer, Vik says they should be shot… Through the trees we grind, upwards through the heat with the crowd surprisingly subdued. 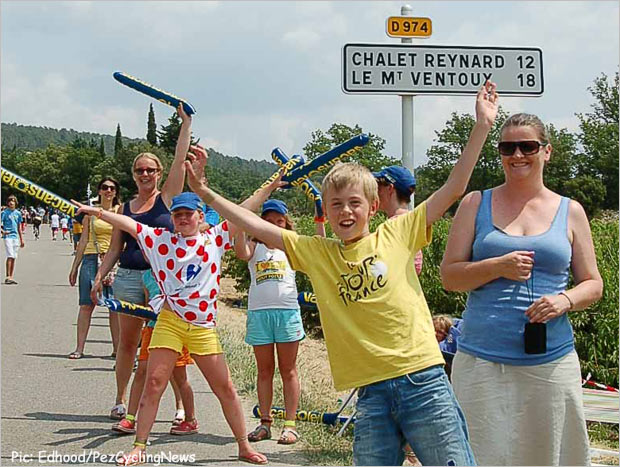 The caravan is closing us down so the moto gendarmes aren’t too keen on us stopping – lot’s of photos shot out of the car window. The trees thin and the Beast reveals that limestone skin. 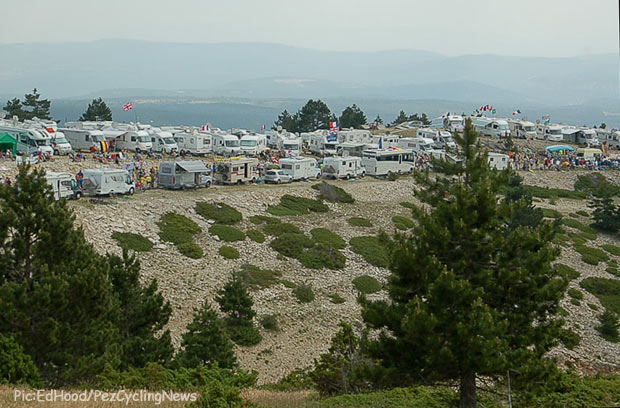 The camper vans have massed from all over Europe and Scandinavia – higher, higher and then the caravan starts to run us down. 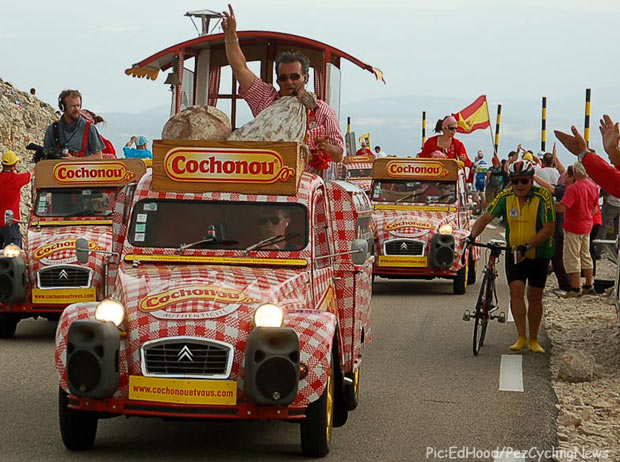 Park up, grab camera, rehearse big smile and waves for the caravan – we always take too many pictures and end up with a back seat full of tat. However, if you’re out in the Provence sun with no hat – you’d pay handsomely for one of those throw away Skoda hats. 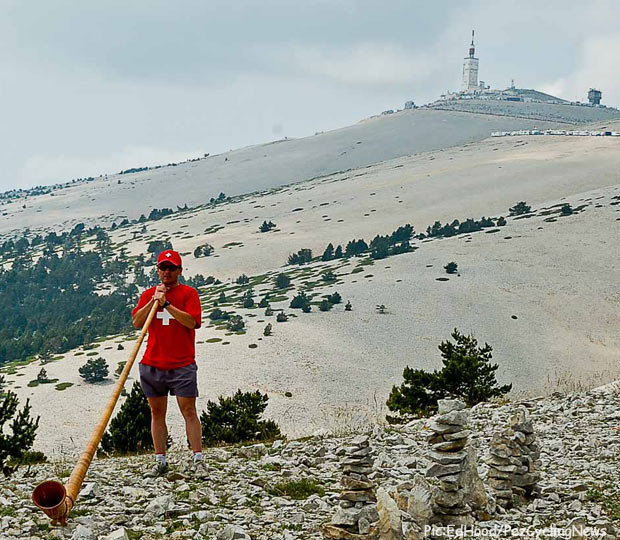 Meanwhile, off the edge of the mountain a Swiss guys is rehearsing his alpen horn numbers – time to go. We’re hauled off the road at 800 to go – everyone, even the famous fotogs like Graham Watson. The race is way up on schedule, we trot down and take up position – there’s not long to wait until Daniel gives us his wrap about Froome and Quintana. 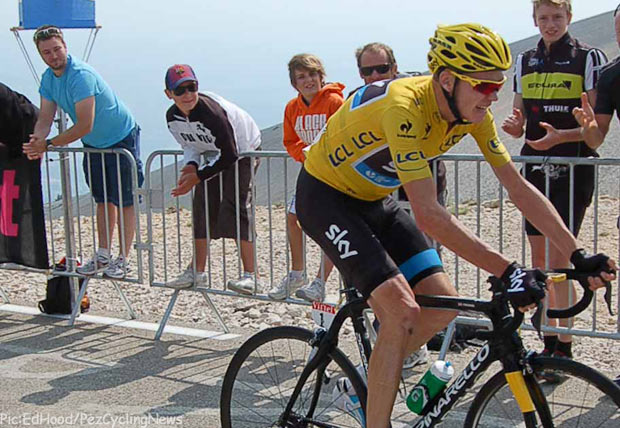 Froome reminds me of Ichabod Crane, the character created by Washington Irvine in his short story, ‘The Legend of Sleepy Hollow’ – skinny, gangly but capable of eating prodigious amounts of food. By the top, Froome had put 29 seconds into Quintana and stretched his GC lead to 4:14 on Mollema (Belkin & The Netherlands) and 4:25 on Alberto Contador (Saxo-Tinkov and Spain). 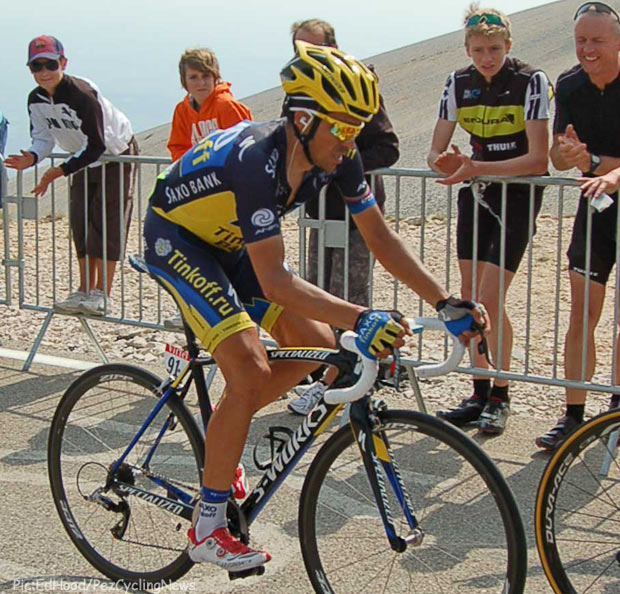 Those last 800 metres saw a re-shuffle; Contador passed us in fourth spot on the wheel of eventual third, Basque Mikel Nieve (Euskaltel) but would end the day sixth at 1:40 on the wheel of team mate Roman Kreuziger (Czech Republic) who was with Dutchmen Mollema and his team mate Laurens Ten Dam when he passed us. 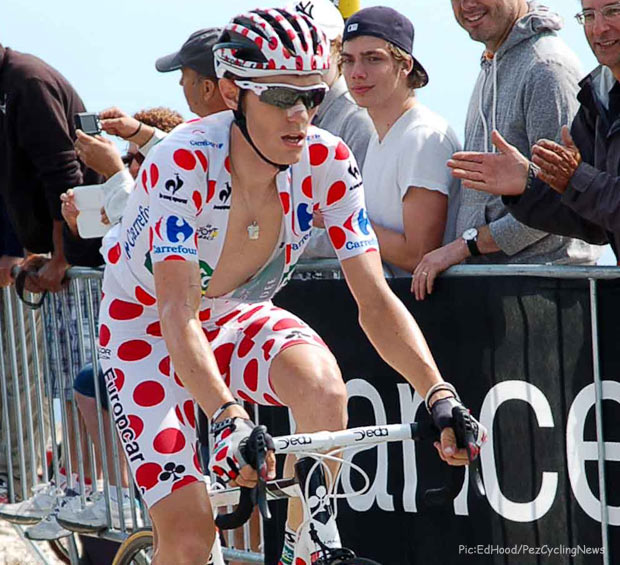 If it was a good day for Froome, it was a bad day for King of the Mountains leader, Pierre Rolland – despite his going points hunting in the early break, big hills mean big mountain points and Froome’s exploit rocketed him in to the polka dot jersey, too. 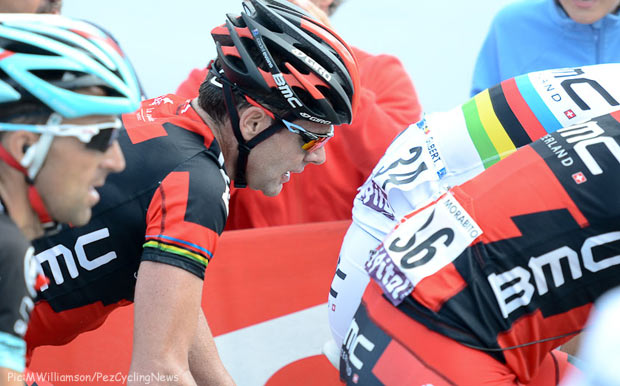 And it was a bad day too for Cadel Evans (BMC & Australia), the former Tour winner dropping another chunk of time to now sit 16th at15:40. 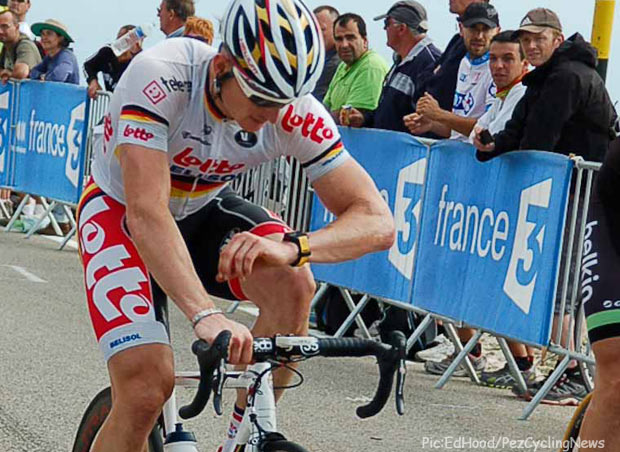 Andre Greipel looked reasonably comfortable with 800 to go; even checking his watch – maybe he was wondering if the bars were open? (Ed’s note: He was actually checking his heartrate on the POLAR RC3 – that we tested here on PEZ last month) 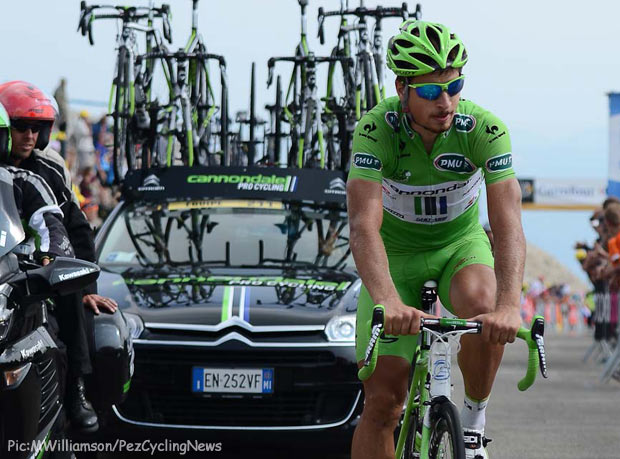 But the man he’s trying to catch for the points jersey, Peter Sagan (Cannondale & Slovakia) was in a bad way – maybe not so surprising when we heard he’d been up the road in the early break to grab the intermediate sprint – again. 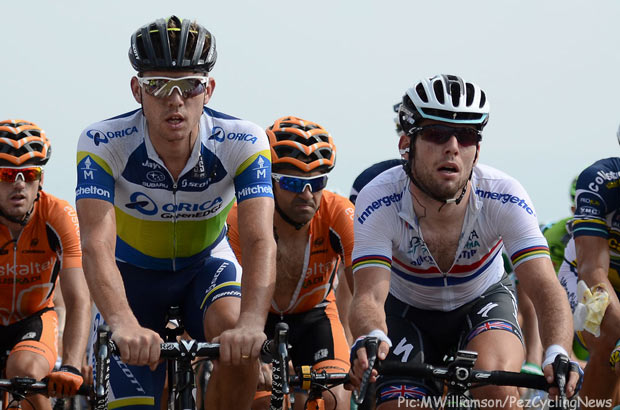 And King Cav was looking none too happy, either.

We always try to honour the race – and the last man on the road in particular. 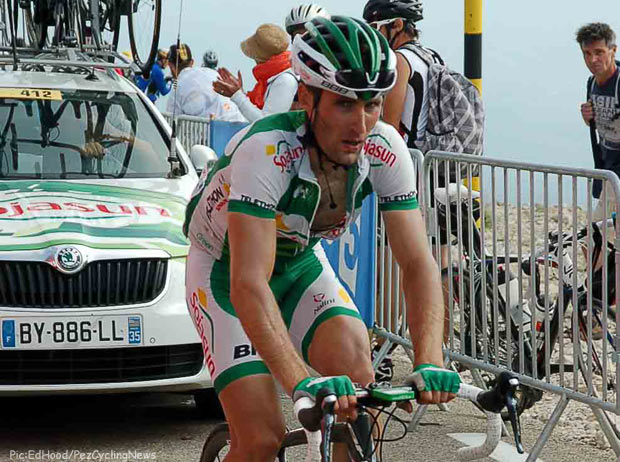 Today it was Jonathan Hivert (Sojasun & France) – he was 18 minutes behind the ‘autobus’ at 50 minutes and struggling with every fiber of his being – respect, monsieur. 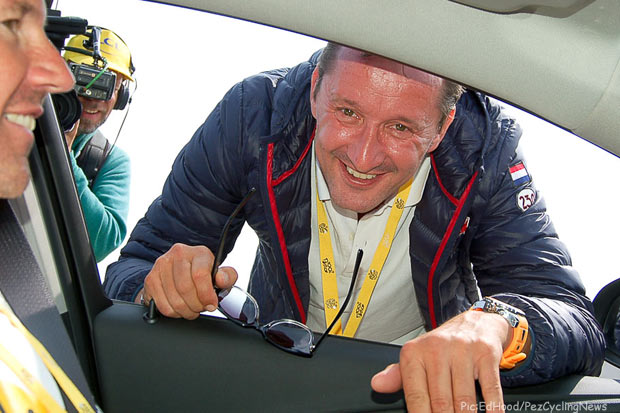 It was time to go; but not before we said goodbye to former top Danish pro, Jesper Skibby who was waxing lyrical about Fuglsang’s performance – the Dane now sits seventh on both stage at 1:43 and GC at 6:22.

The traffic jam to the top was horrible but we cleared it eventually – just two hours to drive, 1,500 words to write and over 700 pictures to edit.

But all worth it to be on the Mythical Mountain the day Chris Froome joined the
Greats.

It’s a rest day tomorrow but we’ll have a day packed with reports, so be sure to tune in, and look for more on the PEZ Facebook page and the PEZ Twitter page.