Roadside St.17: There’s no better way to see the TT than from a chase car following a rider – it’s a PEZ tradition at Grand Tours and today we jumped in for a fast ride with Francais des Jeux’s French Elite Road Race Champion, Arthur Vichot.

Froome won, but not by a yawning margin, just 8.82 seconds from Alberto Contador – and on our stopwatch, the Spaniard was 21 seconds up on the maillot jaune at the race’s mid point where the riders bottomed out off the tough Cote de Puy-Sanieres and immediately started the just as nasty Col de Reallon.

But as I always say, the stop watch doesn’t lie and came the finish it was Froome taking his third stage of the 2013 Tour de France.

Being able to ride at least a good time trial is fundamental to stage race success – and nowhere is that more apparent than at the Tour de France where every trick in the book is employed to cheat Old Father Time and steal those precious ticks of the sweep hand.

The 32 kilometre chrono from Embrun to Chorges wasn’t your average time test; it climbed from the word ‘go’ with the first ascent being 6.4 K @ 6% and the second 6.9 K @ 6.3% – but that’s only half the story, the surfaces were bad and given that both climbs contained false flats there were stiff hairpins much steeper that 6% in the mix. 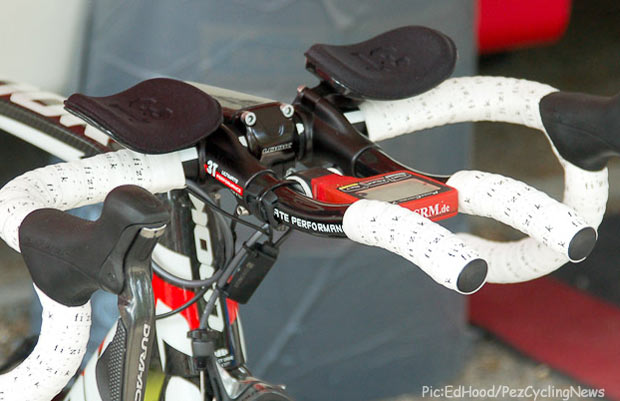 The first question of the day was bicycle selection; most rode their road bikes with ‘clip-on’ handlebars – but Froome did change to a TT bike for the very fast and non-technical second descent to the line. 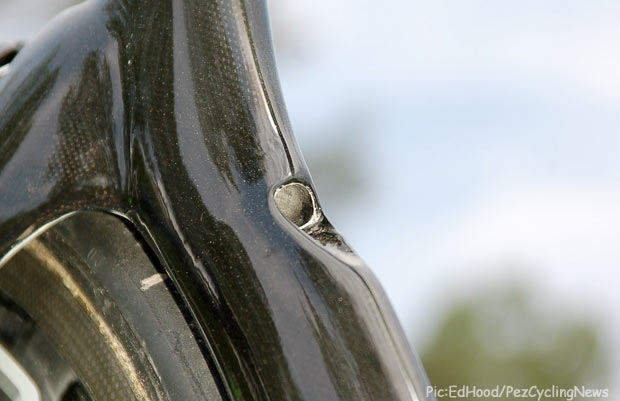 And for all the talk of wind tunnels and watts saved, we wonder why the little details get missed; why no grommet in the hole to access the rear brake fixing on the Movistar Pinarellos – that must be turbulence, right there. 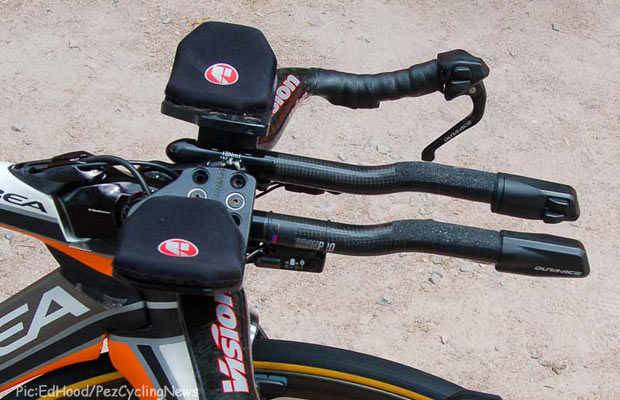 But we do like electric shifting, it’s so much cleaner if the cable routing is done neatly and the battery is concealed within the frame or seat pillar. 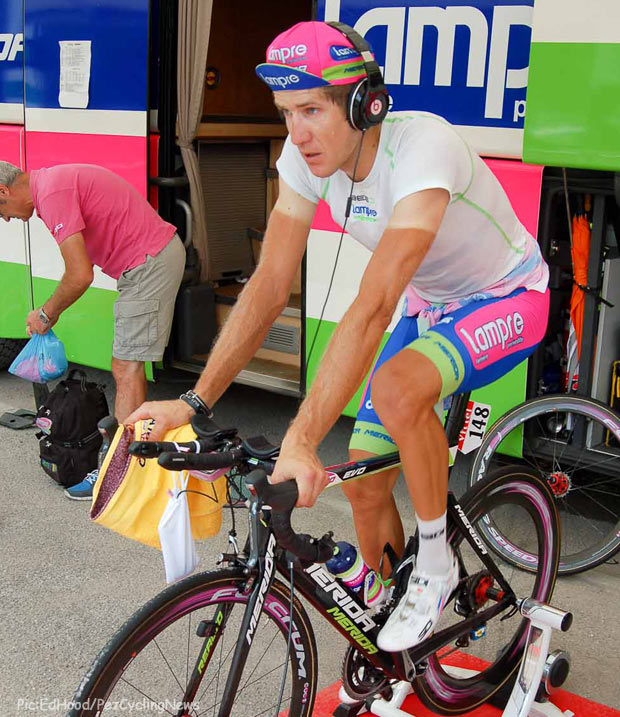 Then there’s the mental aspect, some, like Lampre’s big Polish tough guy Niemiec use music to psyche them self up. 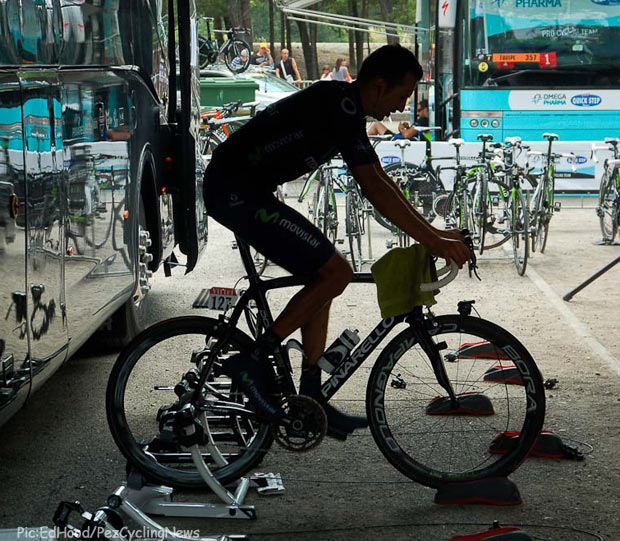 For others it’s a private solitary process of getting in the ‘zone’ – this is Movistar’s Spanish rider Rubens Plaza sitting on his own below the team bus canopy, preparing himself for the pain to come. In a test like this one there’s no ‘just riding round’ – you can’t ‘cruise’ on Alpine Cols. 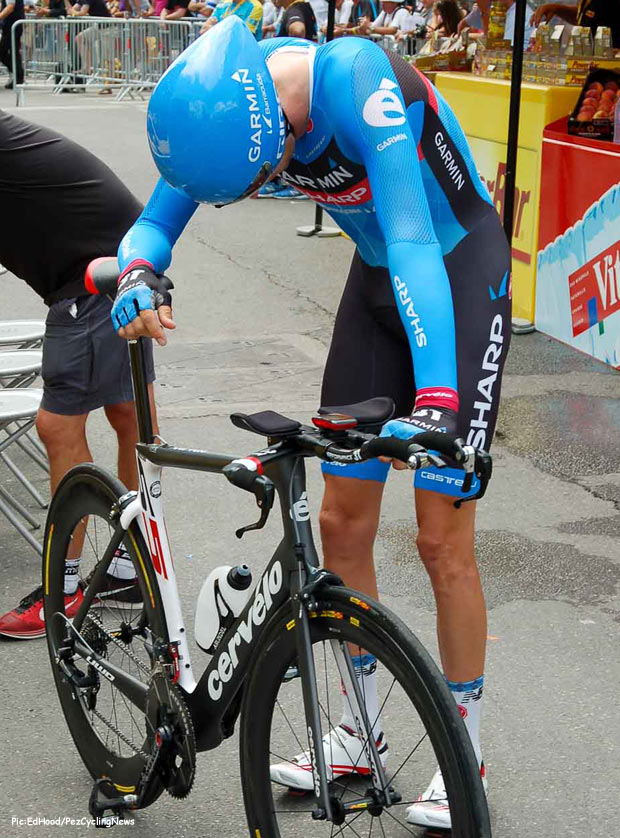 Others need that moment or two before they face the ramp, the last deep breath, the mental rehearsal before the call to the line. Garmin’s 2012 Giro winner, Ryder Hesjedal here takes that moment of calm. 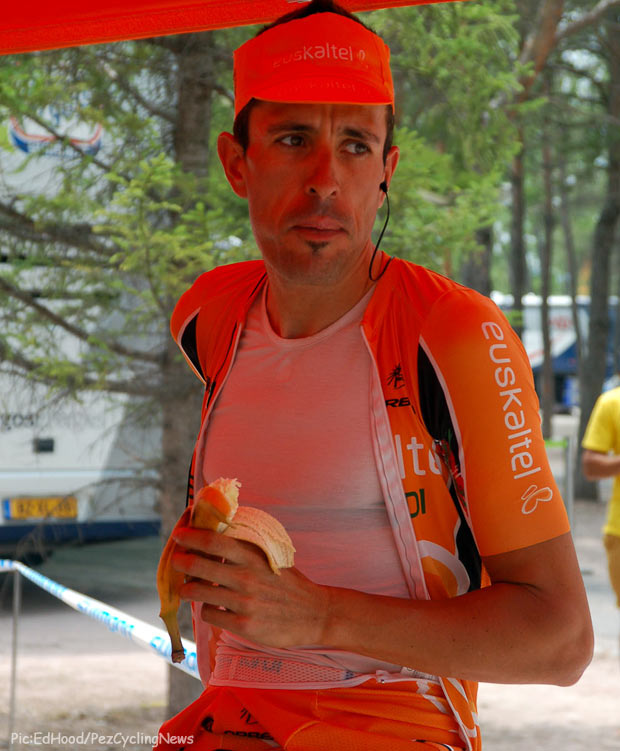 The warm up is taken very seriously by the big contenders, a little less so by the middle markers – like over at Euskaltel… 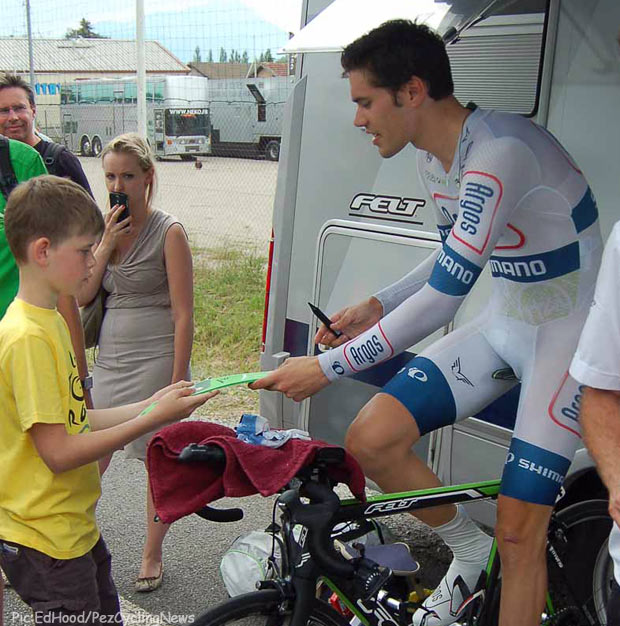 Whilst those Argos boys are happy to sign autographs… 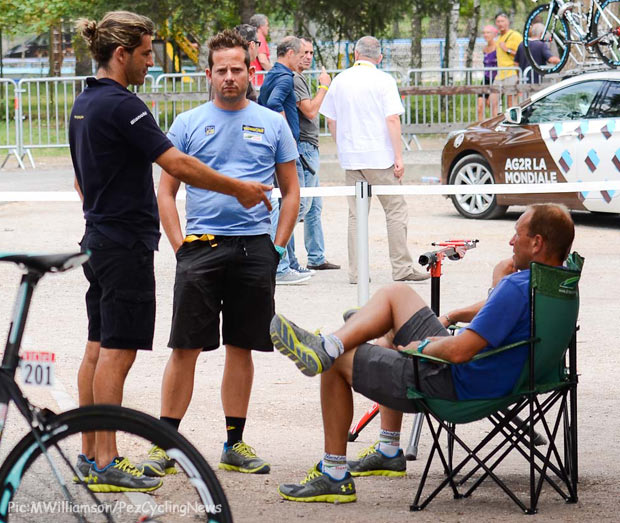 But for many of the personnel it’s a lazy day, the team hotel is the same today as for the rest day so there’s no baggage to lug around France and there’s no feed to organise – so there’s more time to yourself. 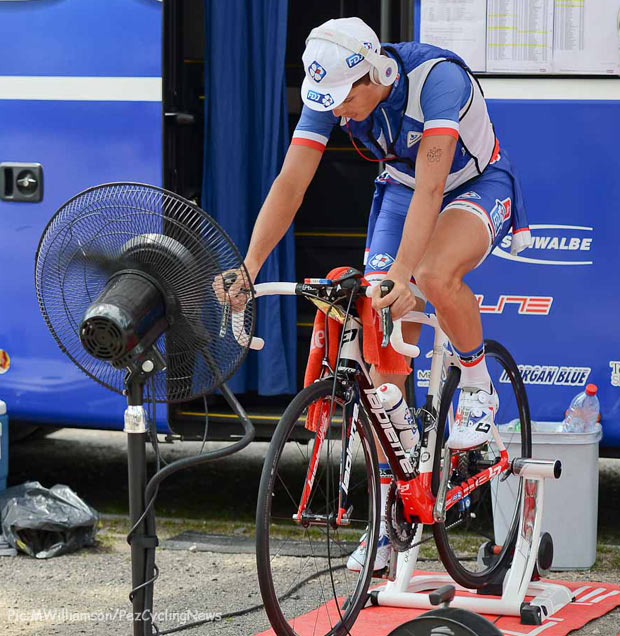 Of course, PEZ has to follow a rider in the chrono, just so we understand the course and can see how it rides. Our victim was French Elite Road Race Champion, Arthur Vichot (F des J) tall, tanned, slim and handsome – some guys…

Vichot warmed up on his turbo with an ice jacket over his skinsuit whilst sitting in front of a fan – when the air temperature is 30 degrees plus the heat saps energy; the body needs it for cooling purposes and vital elements are sweated out of the system before the race has even started. 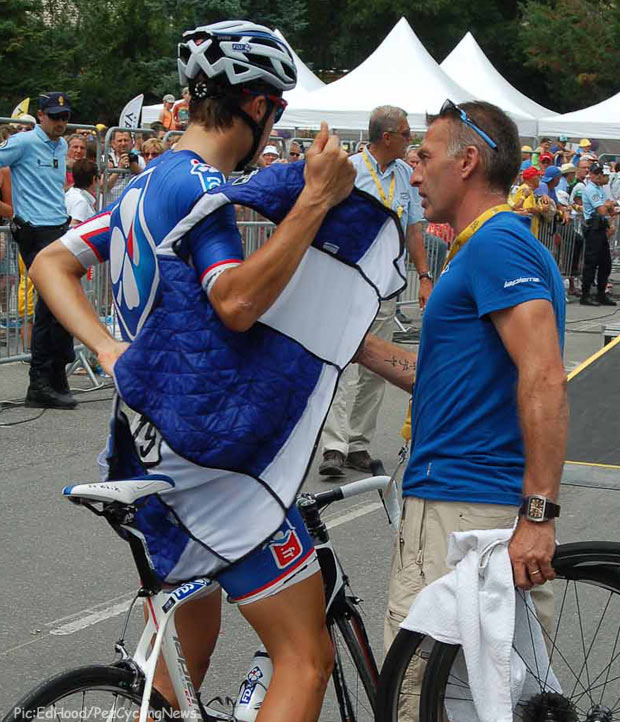 Down at the start line, the Frenchman had his bike checked by the UCI commissars then peeled off his ice vest, handing it to the trusty mechanic who’s there with spare wheels – just in case. Vichot didn’t go for a rear disc – albeit the ‘Heads’ did. 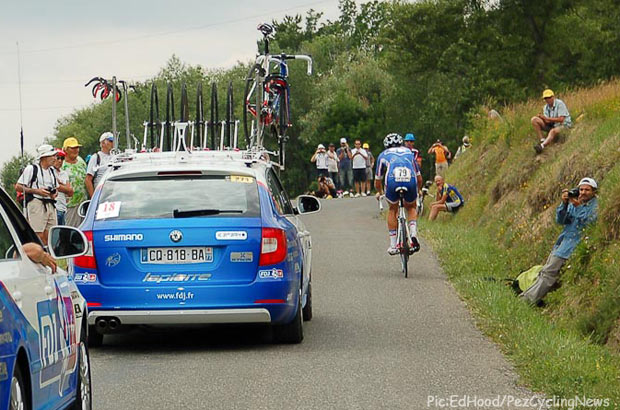 The course was a swine, climbing from the very start with no time to ‘ride in.’ Vichot was careful not to overcook himself on the early part of the climb and seemed to be going better as the hill progressed. The surfaces were bad and the gradient variable so there was no settling in to a rhythm – he was in and out of the saddle all the way up. The first descent was highly technical, hairpins, bad surfaces and steep – Vichot obviously doesn’t share team mate Pinot’s fear of fast descents and went down like a brick down a lift shaft. 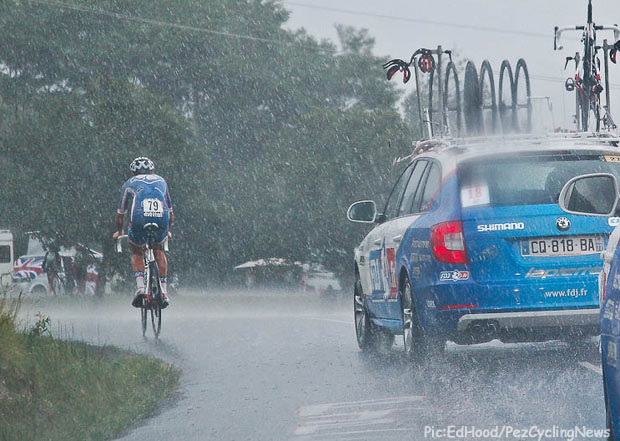 The second climb was where things went biblical – maybe the worst rain I’ve ever seen in Europe lashed our boy as he punched and danced his way up through the hairpins. 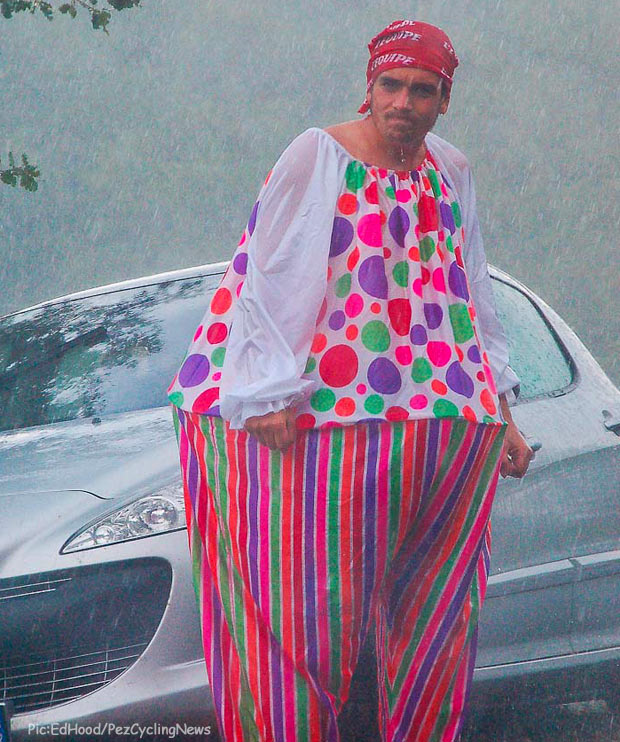 Even the clowns were sad. 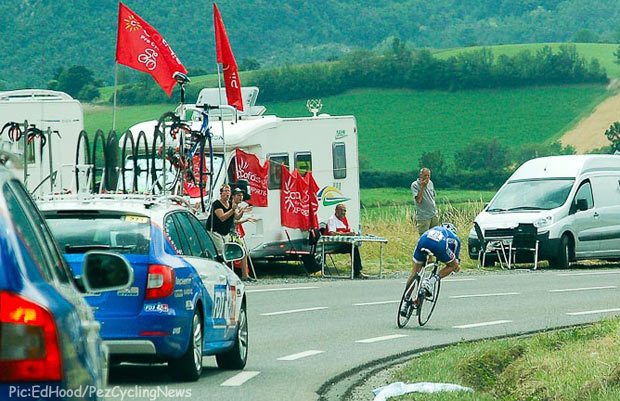 Fortunately, the rain stopped as suddenly as it started and Vichot bombed the descent to the finish in fine style, often pedalling out and having to tuck and freewheel – impressive stuff. 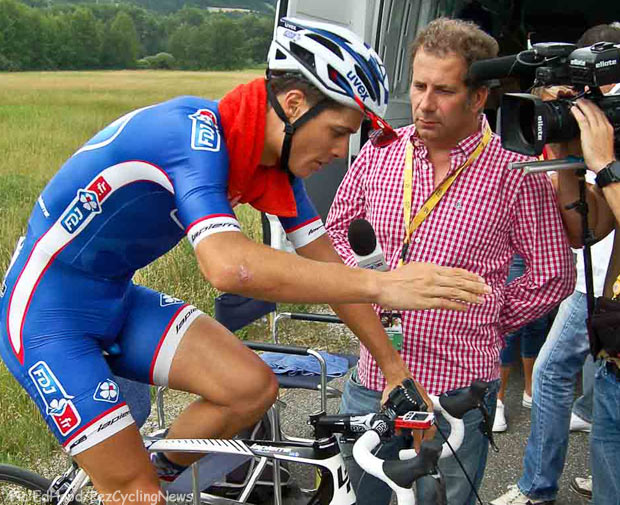 We caught up with Vichot after the line to check out his post-race ritual – maybe an easy ride back to the hotel? Nope – the turbo, again, albeit in his bottom gear to break up that lactic. But the dreaded microphone is never far away if you’re French Champion. We felt the job wasn’t done ‘til we saw the GC men in action, so headed back out to the half way point to hunker down and capture some images of the men who’ll be on that Paris podium. 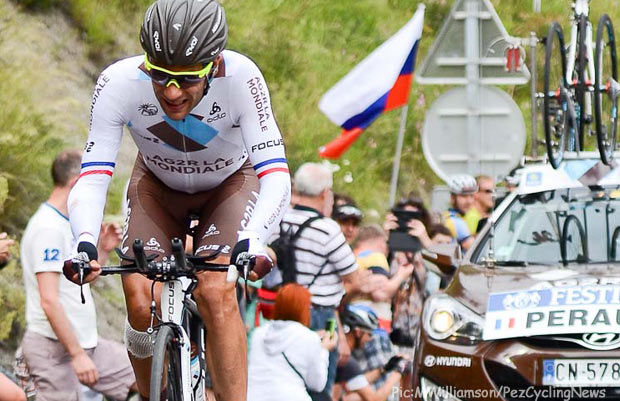 We caught the top ten – they all looked mightily impressive. But unfortunately, best placed French rider, Jean-Christophe Peraud (AG2R) crashed not long after Martin took this picture and is out of the race. 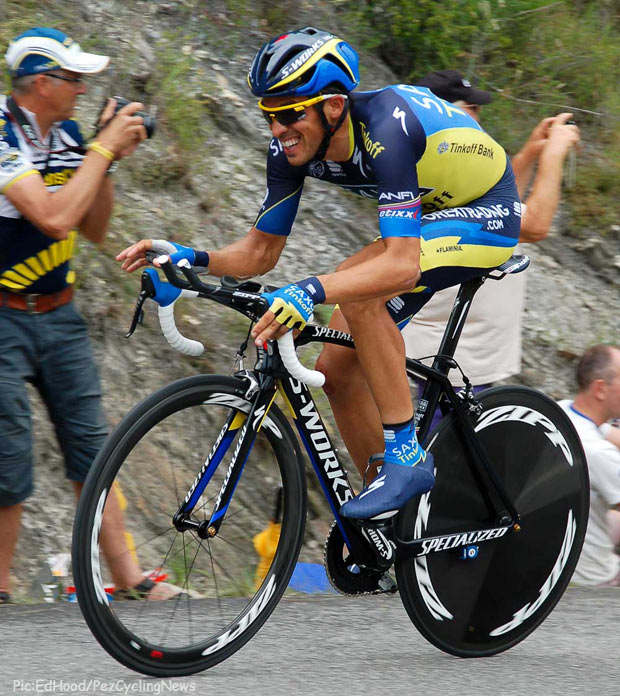 Third placed Alberto Contador (Saxo-Tinkov & Spain) was ‘full gas’ and fastest on our stopwatch by 21 seconds and looked to be heading for the win. 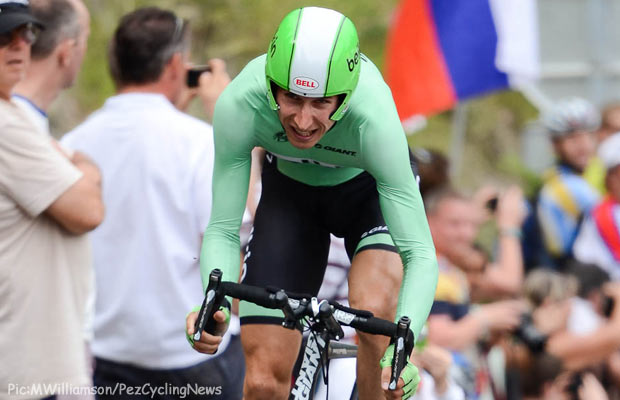 Bauke Mollema’s (Belkin & The Netherlands) second spot had evaporated by the time he passed us; one minute down on the rampaging Contador with another climb to scale – he only had an 11 second buffer on Contador at the start. 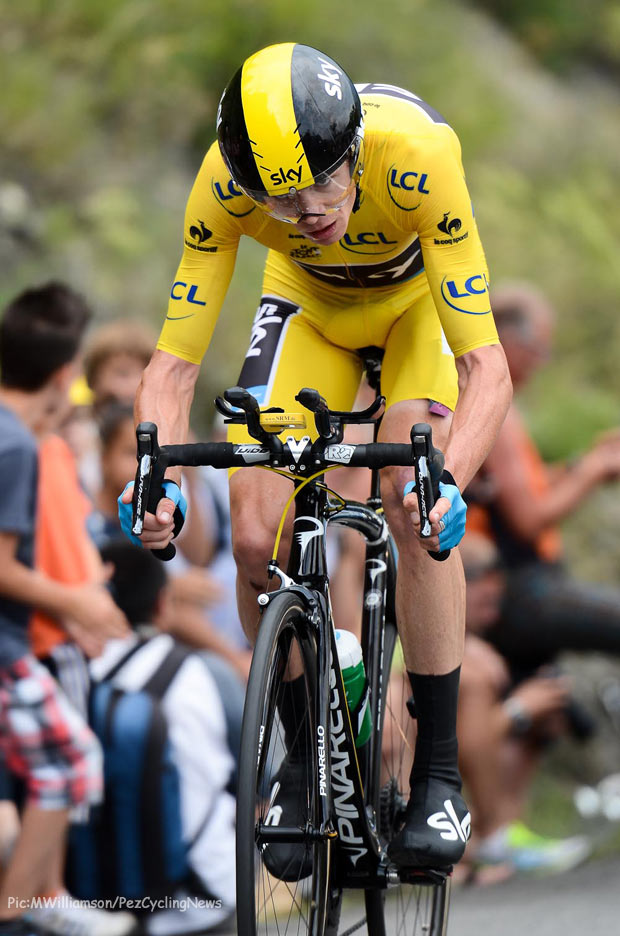 The maillot jaune, Chris Froome (Sky & GB) was down on Contador but was obviously riding to a plan – which included changing to a TT bike for the final descent.

Martin chatted to multiple British time trial champion Michael Hutchinson before the start. The Ulsterman is here on journo duties for the British ‘Cycling Weekly’ magazine and ‘Hutch’ explained that Sky had rehearsed the bike change and reckoned that the 15 seconds lost with the substitution would more than be made up for by the aero advantage of a TT bike on the mega quick drop to the finish – they were right.

But like a Zombie movie where the ground shakes and the rotted arm emerges from the soil, it’s too early to say that Contador is dead and buried.

L’Alpe d’Huez tomorrow, and twice – but is it that stage, already? We’ll be there, embedded with the Dutch fans – more tomorrow, if we make it out alive, that is!

The Queen Stage runs tomorrow with dueling ascents up Alpe d’Huez – that will be amazing and we’ll be there – be sure to tune in, and look for more on the PEZ Facebook page and the PEZ Twitter page.