Roadside St.9: It’s 3:40PM, the press room in Mulhouse is filling up, and the break has 6 minutes and 71kms to go – and I’m feeling my legs after riding the Cat. 1 Le Markstein and cat 3 Grand Ballon passes at the Tour de France today.

I’m four days into my shift at the 2014 Tour de France, and yesterday’s post-stage drive out of the mountains led to a 10:45PM dinner, but we did manage lights out before 1:00. The fatigue is laying in wait, but for now the adrenaline of being here is keeping it at bay.  And while my fitness this year is nothing to write home about, that hasn’t stopped me from pedaling out two great days on the bike. 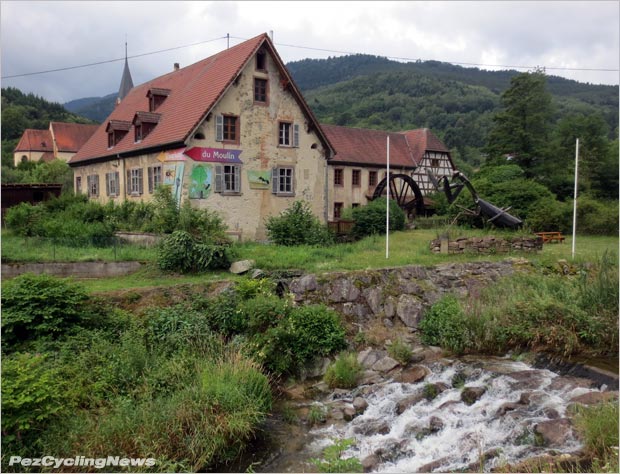 The weather again threatened rain, but we got lucky and stayed dry for my 3 hours ride over the Cat. 1 Le Markstein and Cat 3 Grand Ballon passes, and the un-rated but leg-sapping Col Amic – all inside the final 65kms of today’s 170km run from Gerardmer here to Mulhouse. I wanted a closer look at what ranks as a Cat. 1 mountain climb, and after surmising that the altitude gain didn’t look so bad on paper, I can attest that things are better assessed in person – and the lactic acid in my legs agrees. 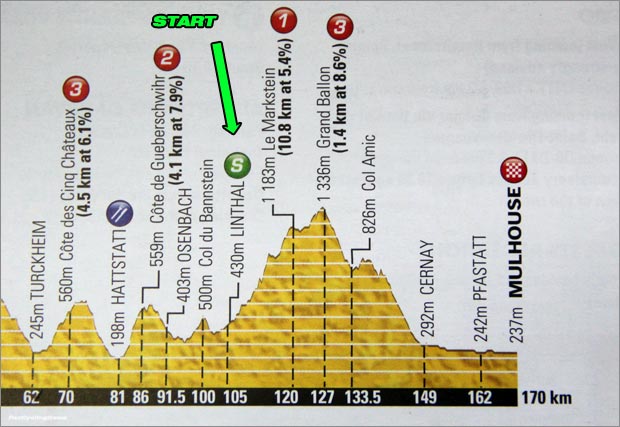 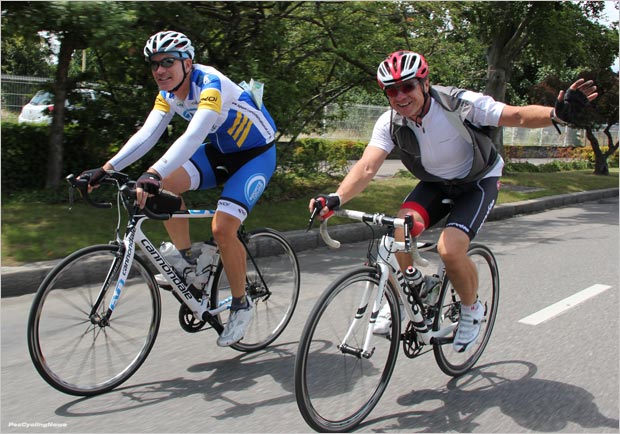 For the next couple of nights we’re lodged into the very nice Hotel du Parc in Mulhouse – courtesy of Sports Tours International. The UK-based company’s cycling & hiking tour offerings number in the dozens – and they’ve got a full roster of trips for this year’s Tour, including short weekenders for anyone close enough to hop on over for a couple for days, to longer excursions into the Vosges, Alps, Pyrenees and Paris. Today’s ride rolled straight out of the hotel, backtracking on the course and up the Grand Ballon – which really is a much better climb than the way the Tour (and myself) came through.

Back to the ride and to set the stage – we’re in Mulhouse in the Alsace region which has at different times in history belonged to either France or Germany – which explains the food down here – think sausages and sauerkraut. 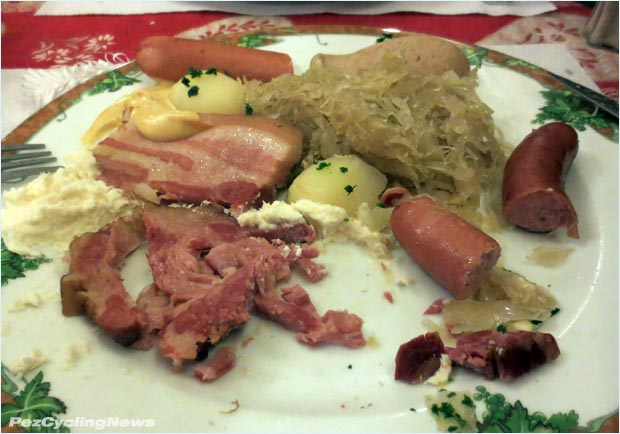 Last night’s dinner confirmed my theory that anything can taste ok with enough mustard on it. 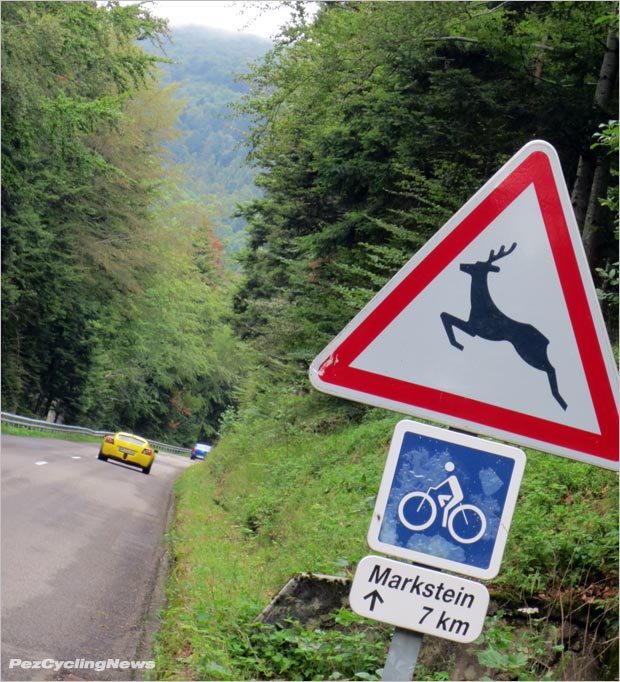 We drove to Linthal for a reasonable 10:30am rollout to the uphill 15km to the top of le Markstein (that sign was a good half hour up the climb for me). The lower slopes are in a wooded forest, and a pretty straight run up fairly gentle slopes. I wondered how the legs would react after yesterday’s 15%+ climbs – and after settling into my bottom gear almost from the get-go, everything was A-ok. 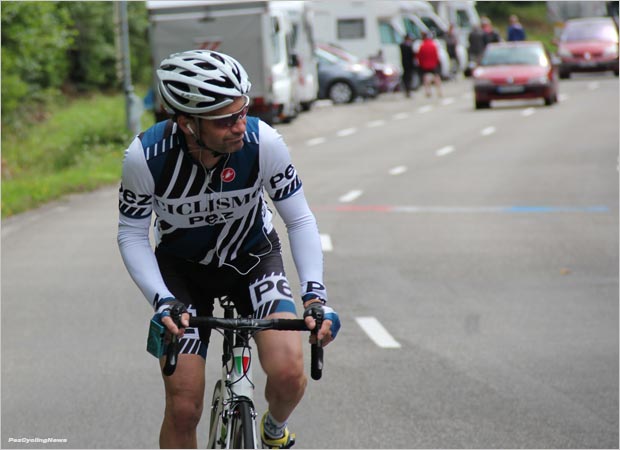 The roads were pretty quiet – almost no cyclists yet and I had a fair amount of alone time – which prompted some much needed tune-time as I’ve hit my saturation level of French euro-pop.

The Cat. 1 Markstein rates almost 11km long at 5.4% – and while the stats look fairly tame, what pushed this into the cat. 1 ranking is the position in the race as the 5th rated climb today – so imagine getting here with 100km already in the legs. And let’s face it – 15km uphill is a long way – period. 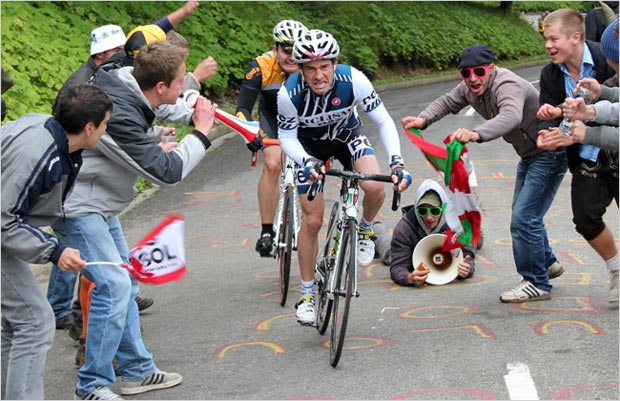 The heavy forest keeps the views to a minimum, which meant running into these guys was a welcome break from the bottom gear grinding. 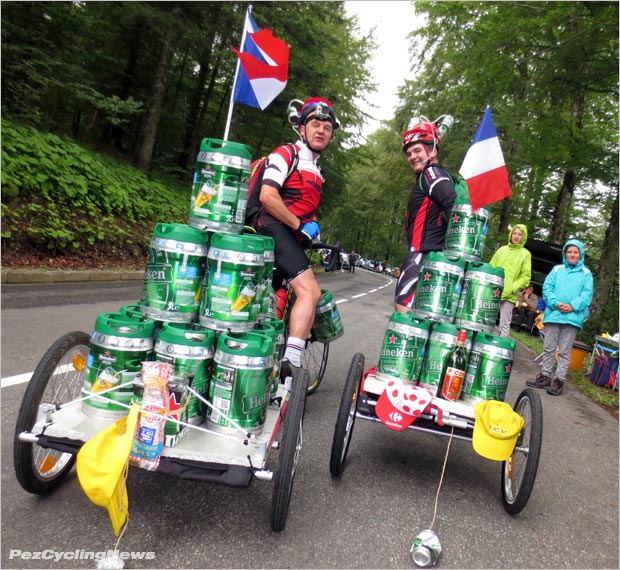 Not far up, the increasing fan density signaled the summit was near. I’m not sure if these guys rode up from the bottom, but they got full points for best fan gag of the day. 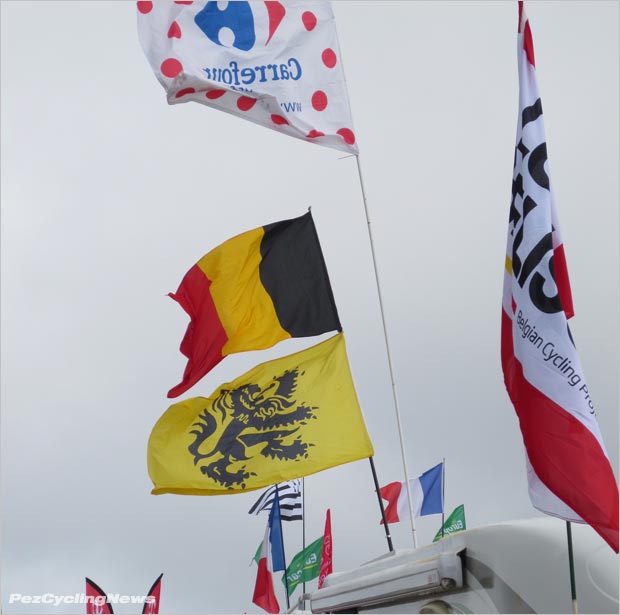 At the top a cold wind was blowing, but the rain stayed inside the clouds. Tomorrow’s route comes through here as well – via a different way up – so there were hundreds of fans settling in for a rare two-days of the Tour without having to break camp. 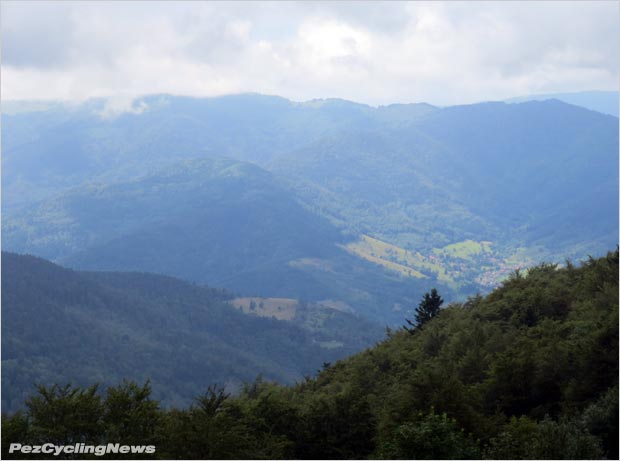 Just past the summit I spied this view, and after being clouded & forested in for the last few hundred meters I realized just how far up we’d come to reach 1200 meters altitude, it was the highest I’ve been in over a year.

The parcours follow a saddle as the road traverses from the Markstein to the Grand Ballon, which can actually be climbed from 4 different directions. The low clouds kept a lid on the big views, but the sun poked through to celebrate my reaching the summit – just above this marker. 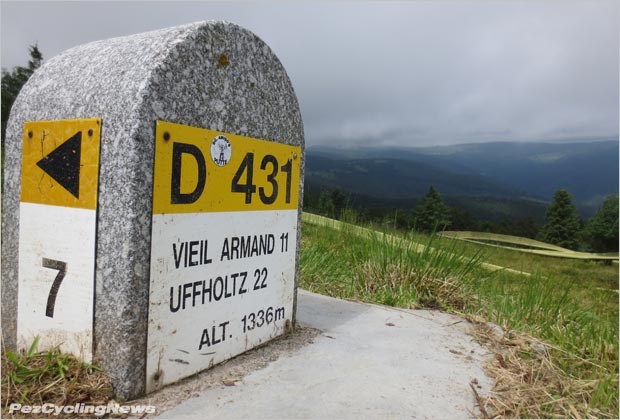 Over the top some fine descending awaits as the road twists and turns down for almost 20km. I say almost because there’s a slight interuption with the unclassified Col Amic – something like 150-200 meters of uphill, and on this day a lot of wind. 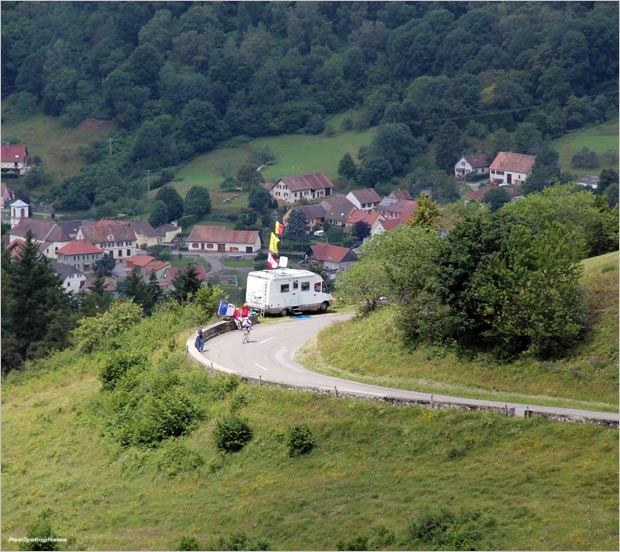 This being the 100th anniversary of the start of World War I, the Tour visits many of the regions and towns from the 1914 Tour, and also regions that were significant in the battles of 1914-1918. Looking east from the Col Amic, I was at first taken by the beauty of the vista, and stopped to snap this pic and soak it in. The only sound was the wind… peaceful indeed. 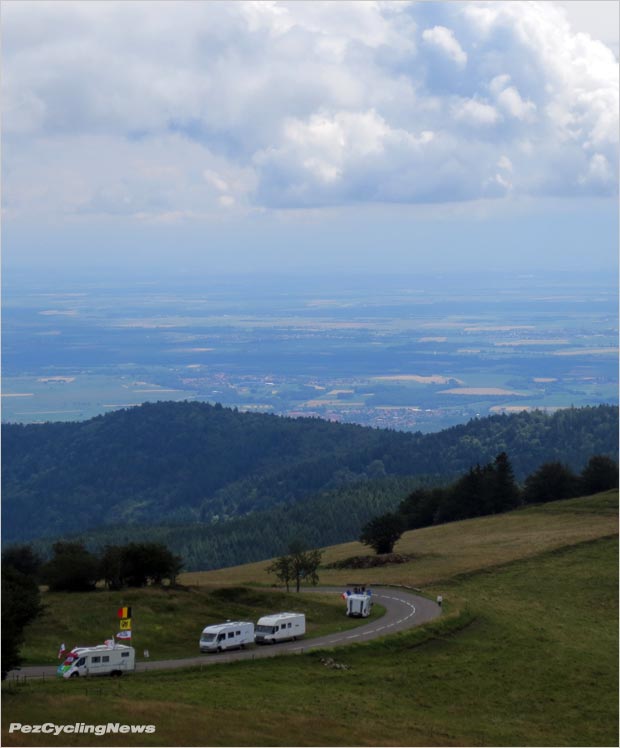 Then I realized that I was looking towards Germany, and that this area saw some very heavy fighting in the Great War. Seeing the tranquil towns miles off in the distance, I wondered how many people died on those same fields almost a century ago. 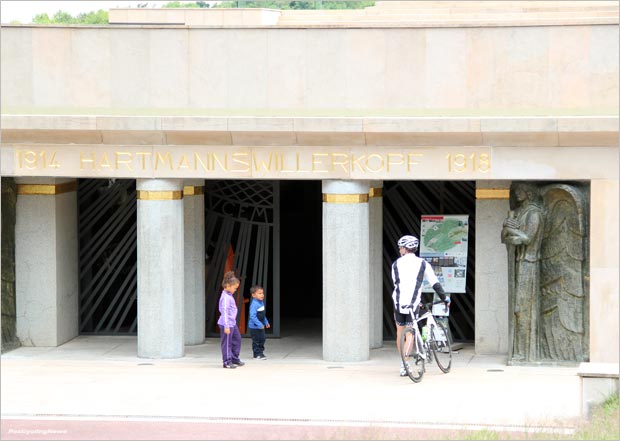 Riding on a bit further we came upon the Hartmanns Willerkopf memorial – a national cemetery and monument that honours soldiers both French & German who died in battles here. There are thousands of original graves, and inside is a tomb marked with a shield that measures some 12 feet across. Beneath it are some 12,000 more soldiers – laid here to rest. 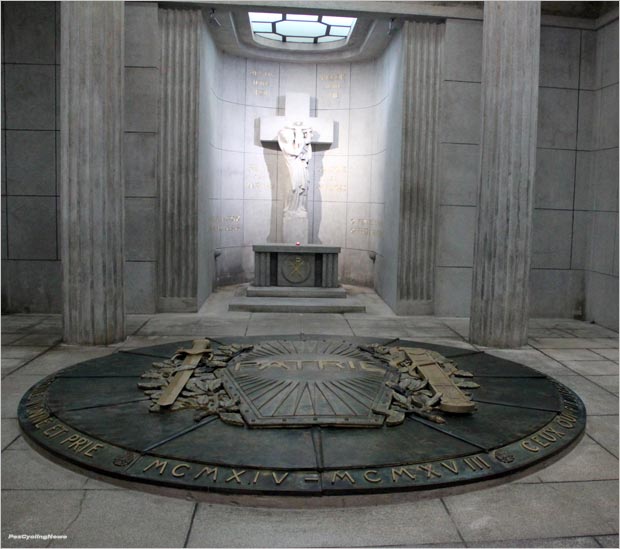 I’ve still got a week of Le Tour to look forward to, but I’ll remember this edition for a lot more than the great riding and thrills of being here – considering I’m here simply for what’s nothing more than entertainment – I’ll remember how not so very long ago, things in this part of the world were very different from anything I’ve known… or hope to know. And that’s making this a special Tour.

As I sign this off – Tony Gallopin has just donned the yellow jersey – and will be the first Frenchman to wear it on Bastille Day tomorrow since I don’t know when. That’s a great thing in his life, and something that will be fantastic to see tomorrow on the race’s hardest stage yet from Mulhouse to les Planche des Belles Filles – seven categorized climbs and 20% at the finish – gonna be a good one.

Thanks for reading and see you tomorrow!
– Pez

Tour De PEZ: Into the Vosges!