Roadside St.10: A big part of the Tour’s energy and atmosphere comes from the guys and girls that work in the massive publicity caravan. Today PEZ went backstage to check out what their job entails and we even managed to catch up with 5 time tour winner, Bernard Hinault. 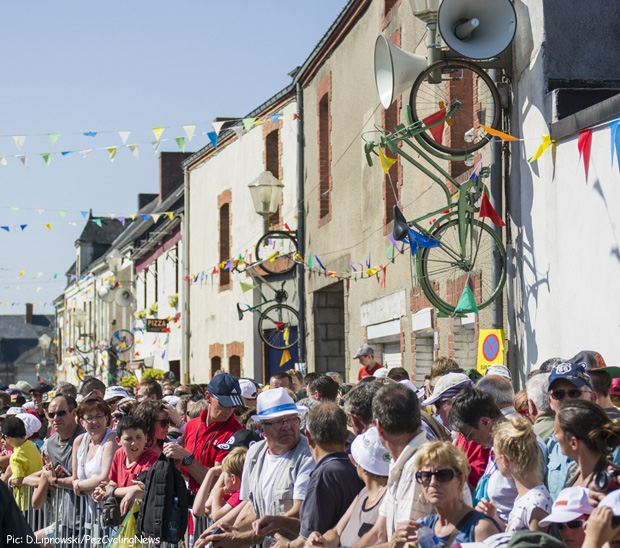 Welcome to Saint-Gildas-Des-Bois, where they know how to decorate a town.

Many of the young people working in the caravan have family, usually parents, that work for LCL. I was surprised because nepotism is usually frowned upon in my homeland of Canada, but I learned that it is commonplace in France especially amongst young people finding their first jobs. The LCL team is made up of several cars, and several large floats with giant characters atop them. You have probably seen the giant LCL Lion, and the cyclist wearing the yellow jersey leading the caravan on television. I asked the group in French if anyone spoke English, and found Eulalie Chantreux from Picardy who enlightened me about a typical day in the caravan. 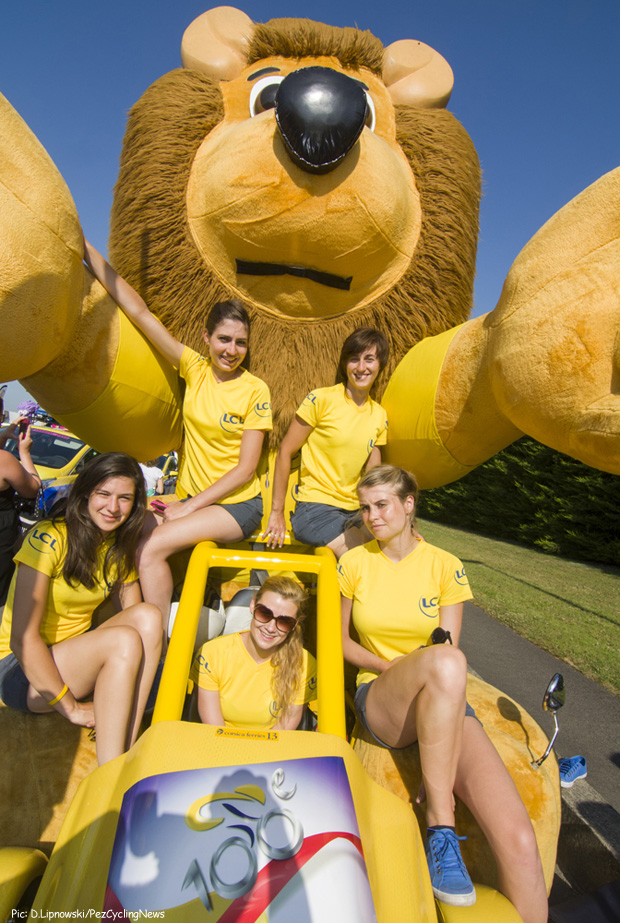 During the last stage the team were in their vehicles from 9:30am-4:30pm the whole time in the hot sun. I asked if it was rough being atop the platform dancing and waving to thousands of fans for 7 hours straight, but Eulalie responded that keeping the energy up is not a problem, but what is rough is the bathroom situation. She told me they only have one break during the day, and it is not convenient to go in nature!

I found out that every corporation in the caravan works differently within the caravan, but within LCL, the members of the team switch positions every day. Eulalie explained how they rotate being in the cars, and on the floats, and that this year they have a Lion at the arrival which is really warm to be inside of it. She said that it’s funny, but not for the guy in it. I finished up the interview by asking her what she will do after the Tour finishes in Paris. When it’s all over she will be going on holidays with her family, and then onto internships for her studies in publishing. 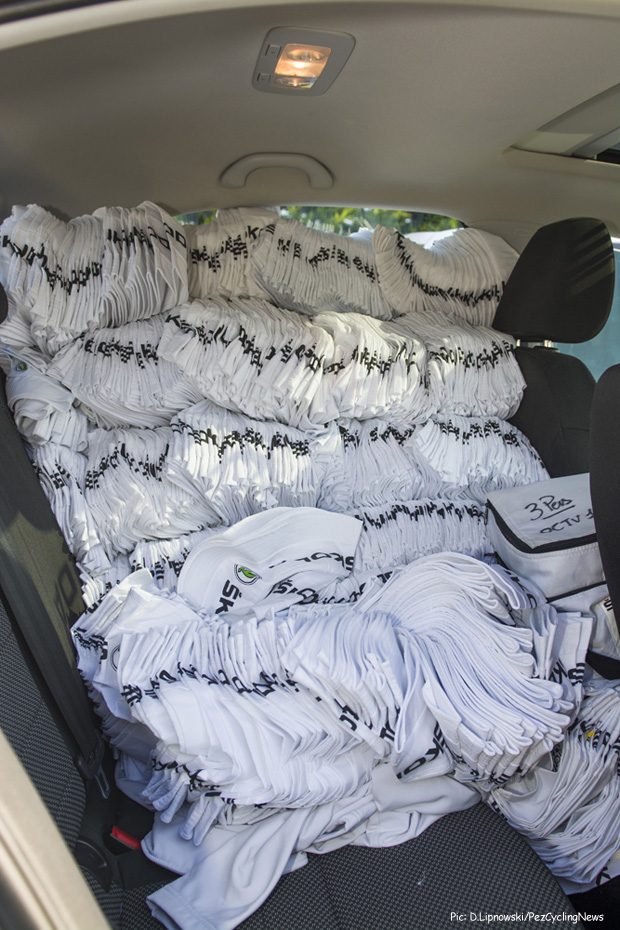 This is the back seat of one of the Skoda cars. Most if not all of these hats will be thrown out of the car windows to fans (and there are several of these Skoda cars doing the same).

I wandered through the large parking lot containing all of the caravan vehicles, and spoke with Lea Rougier who distributes goodies to the crowds in the Ibis hotels vehicles. I asked her what interesting things she has seen during the opening week of the tour, and she told me that “we see a lot of asses”. It turns out a lot of fans lining the roads like to pull down their pants and ‘moon’ the caravan. She also explained that many men ask her to marry them, proclaim their love for her, as well as some other requests that are quite vulgar (that she repeated to me in several European languages). 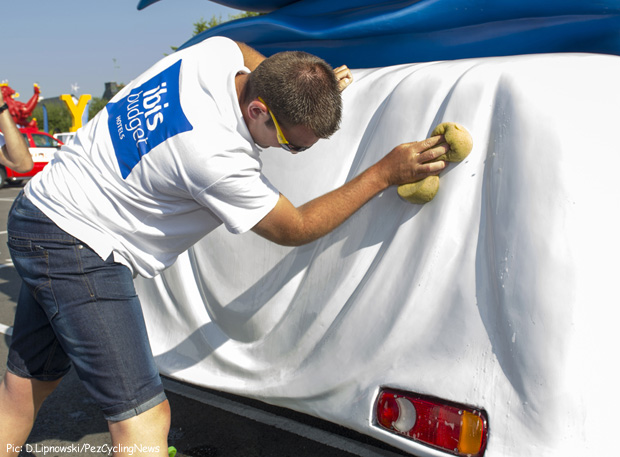 A quick clean before the caravan’s departure. 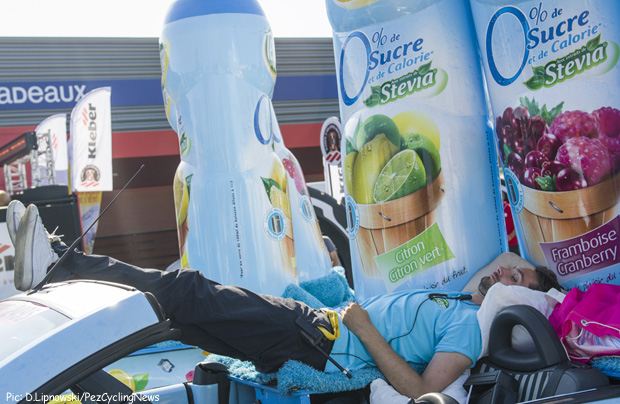 A few minutes of sleep before a long day on the road. 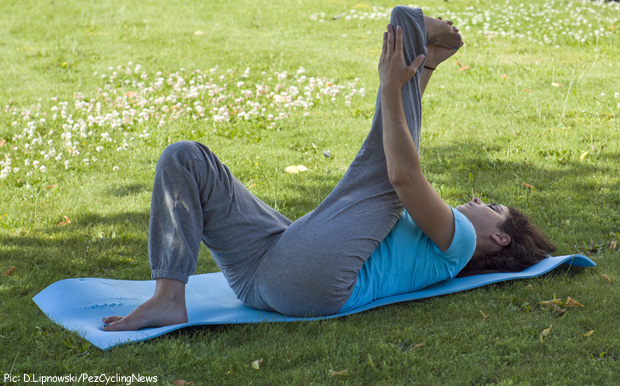 Natalie Sappa streches before performing aerial acrobatics on a float. 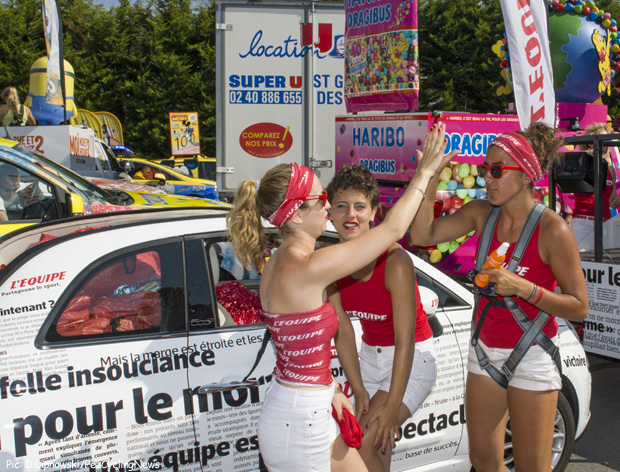 L’Equipe girls apply sunscreen, and high five as they leave for Saint-Malo.

With 15 minutes before the caravan’s scheduled departure time, everyone was getting ready to go. Many people could be seen cleaning their vehicles, applying sunscreen to each other, stretching, or grabbing a few minutes of sleep. Natalie Sappa who told me she is an actress first, and trapeze artist second, told me she likes to stretch before performing aerial acrobatics atop a float in the caravan.

I heard loud music playing in a corner of the parking lot, and I went over to see what was happening. It turns out that almost every day, all of the ‘performers’ of the caravan get together and have a little dance party before the departure for the stage. The PMU team arrived first, and started dancing, and a few minutes later almost every organization was represented in a sea of people. I witnessed two choreographed songs where at least 75 people grooved to the tunes in surprisingly good synchronization.

When the songs were over, I was curious about what just happened and spoke to Lucile Sarrazin who works for Alcatel. She explained that they try and dance as a group before every stage when the parking situation allows it. Sometimes there is no room to host the celebration of the caravan, but they find the space most of the time. I asked her what the dance party does for the energy for the group, and she replied that “it is useful so we can wake up!”. 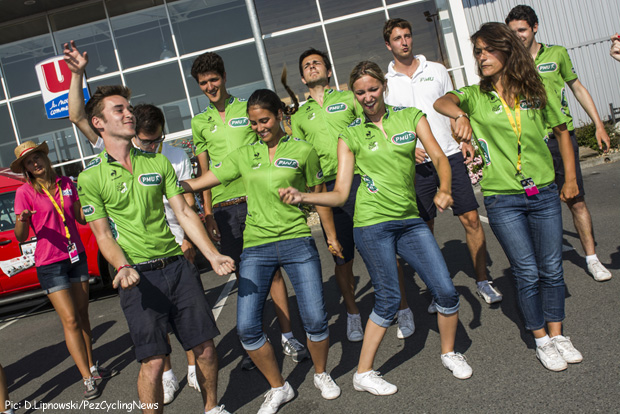 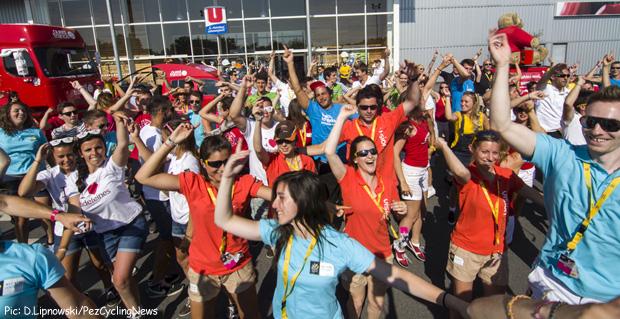 The little dance celebration is the last thing the caravan does before hitting the road, and after it wrapped up, I hung around the Tour Village to see if anything interesting was going on. I had heard that there was a man in the Tour Village who would offer haircuts, but I was disappointed to learn that he hasn’t been at the tour for 3 years now. There didn’t seem to be much going on the the village at the start line, just formalities on a podium. Press conference type situations like these are never too exciting. The one today included gift presentations to local politicians and special guests. Five time Tour De France Champion Bernard Hinault presented many of these gifts, including a medal to a 102 year old cyclist. 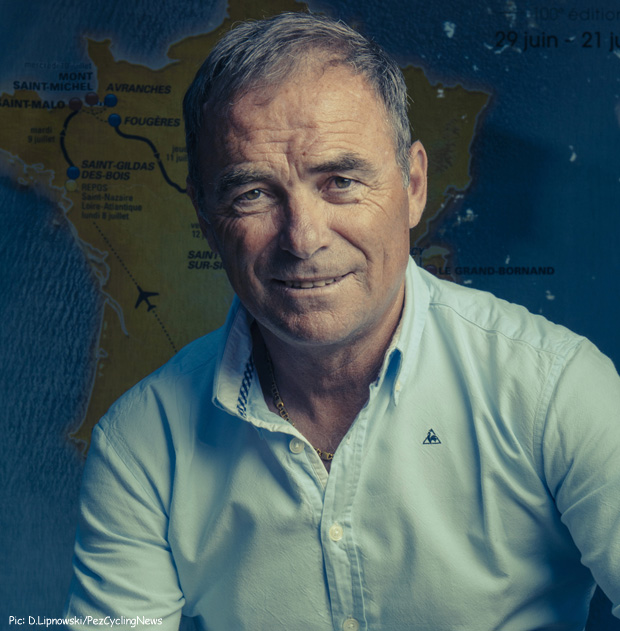 If you are a fan of pro cycling, this man needs no introduction!

After the presentations were over, I hung around, hoping I could meet Bernard Hinault, and make a portrait of him for my portrait a day project. I introduced myself to Mr. Hinault en Français (he doesn’t speak English, I soon found out), and asked him if I could make a portrait of him. He was in a bit of a rush, but gave me the opportunity for a portrait. In the end, I only made 8 images in a total of 50 seconds, and this included repositioning him a few times, and having him take off his baseball cap, and sunglasses. It wasn’t an ideal situation for a portrait, but still an opportunity to meet and photograph a legend one on one (if you don’t count a dozen fans over my should taking photos as well). As he was in a rush, I didn’t have much of an opportunity to speak with him further.

The champion retired from cycling the year I was born, so all I have seen are clips of him on a bike on the internet. He has been involved with the Tour in recent years, as a presenter on the podiums. One of my favourite moments of Mr. Hinault at a recent Tour De France was when a rowdy fan managed to get on the podium at the end of a stage, and Hinault doubled as a security guard and gave him a shove off the podium! Don’t mess with Hinault. 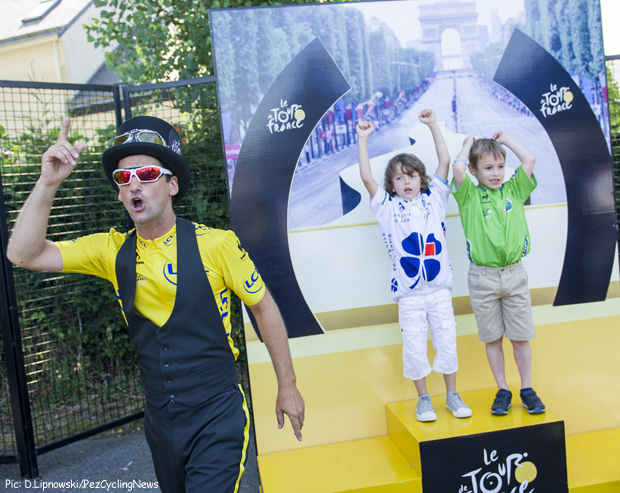 Activities in the Tour Village. 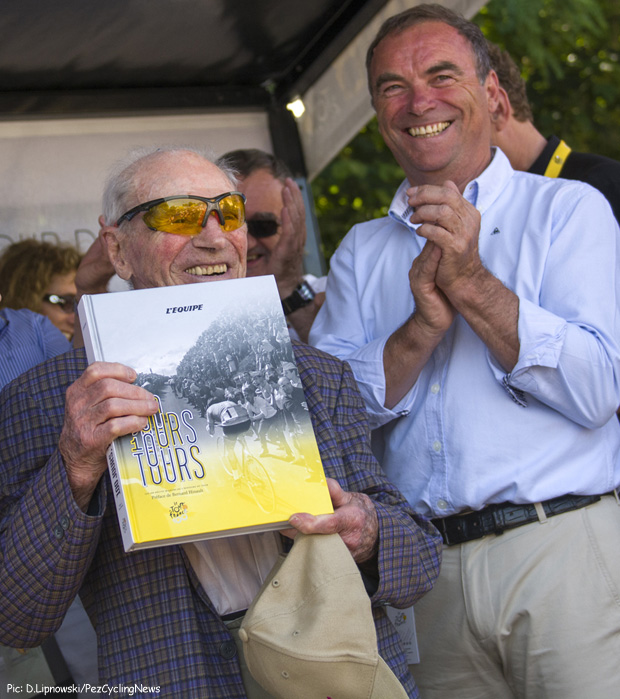 Bernard Hinault presents a 102 year old cyclist with gifts on the podium in the Tour Village. 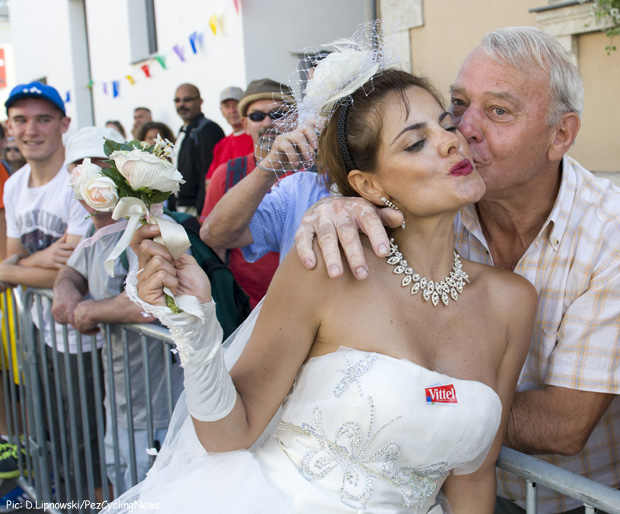 The Vittel bride received a lot of kisses from the crowd. 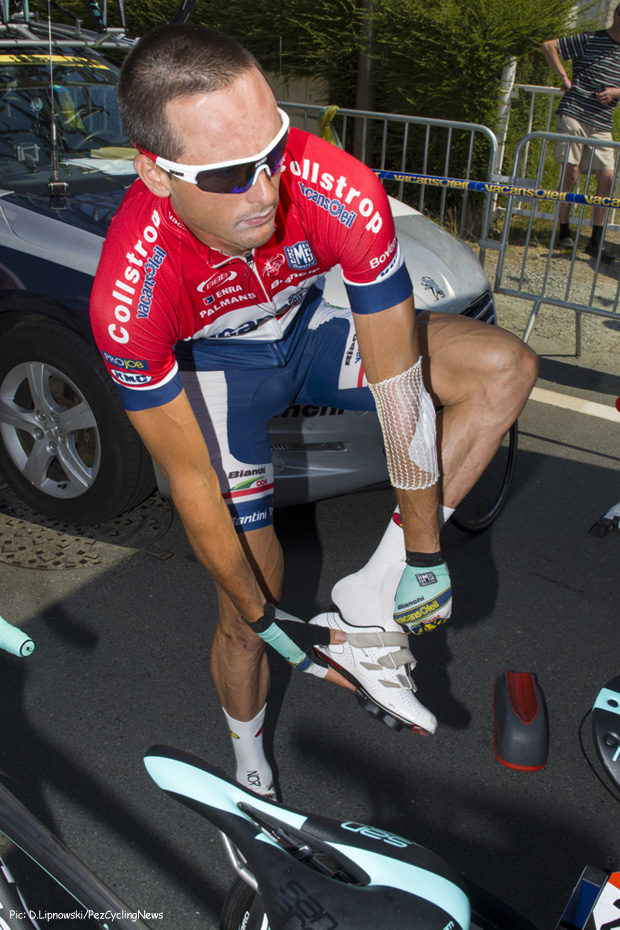 The pros put their shoes on exactly like us regular people, one shoe at a time.

There wasn’t a whole lot going on in the village at this point, so I headed over to the team buses to see how the pro cyclists prepare for their day. There were huge crowds surrounding the SKY team bus, and the crowds got even bigger when Tour leader Chris Froome got out of the bus to sign autographs for fans. I overheard a few British fans commenting on how nice of a guy he is for coming out just to sign autographs. It seemed like most of the cyclists were staying in the buses until the last minute, so I headed to the start line.

There I photographed Pierre Rolland wearing the polka dot jersey, joking around with teammate Jérôme Cousin who was sporting a moustache. Rolland was jokingly smoothing out his teammates stache’, but then surprised him by trying to pull a single hair out! The two guys were curious as to my unusually low angle, and started laughing. 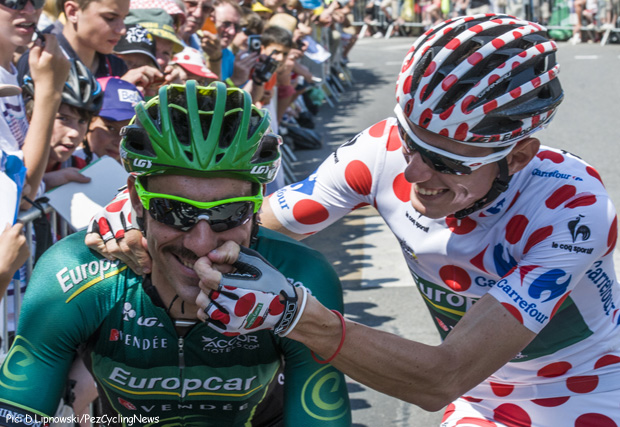 Pierre Rolland jokes around with teammate Jérôme Cousin at the start line. 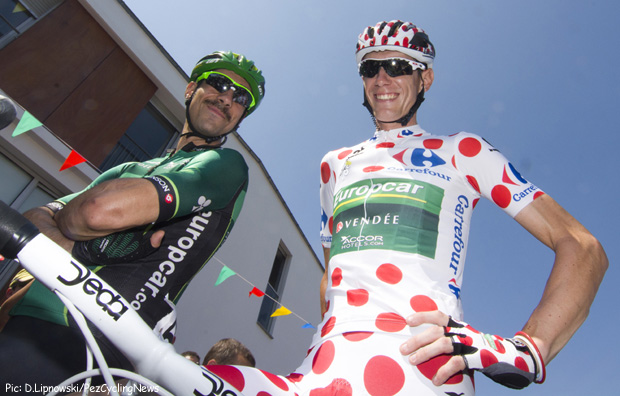 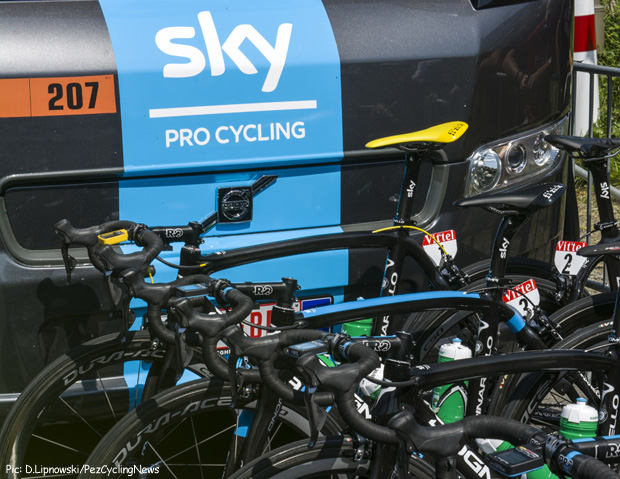 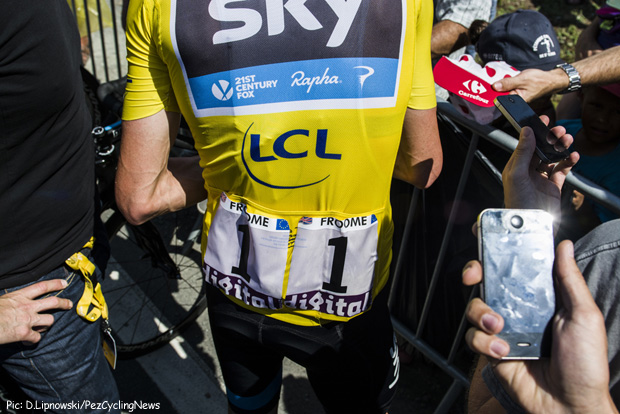 Everyone wants a second of the Maillot Jaune’s time. 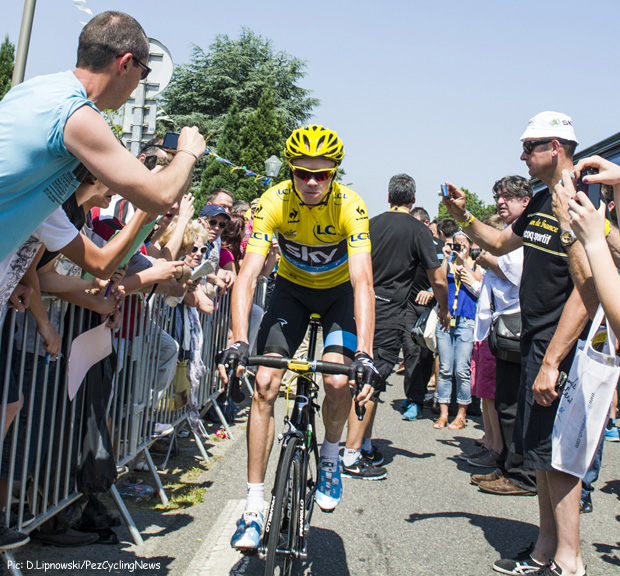 Chris Froome makes his way to the starting line. 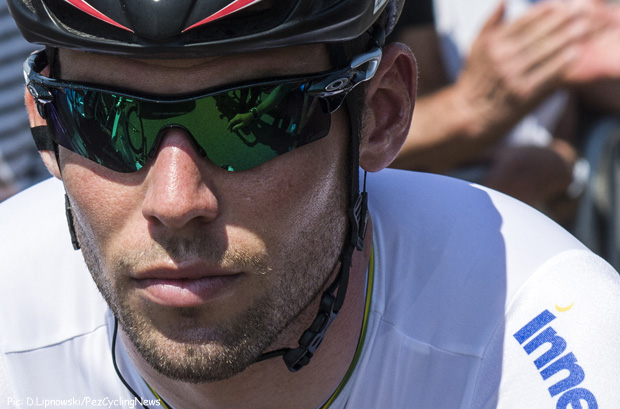 Cav makes his way through the crowd to the start line. 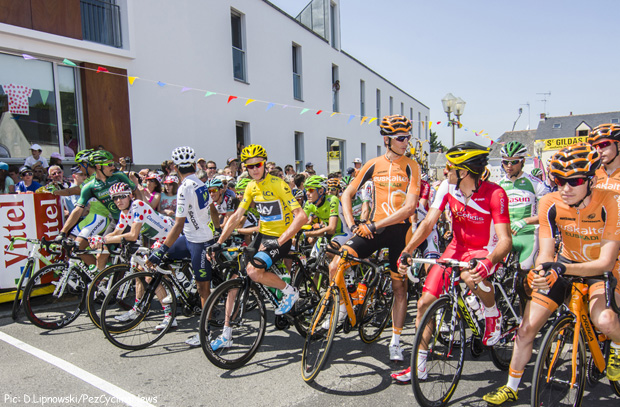 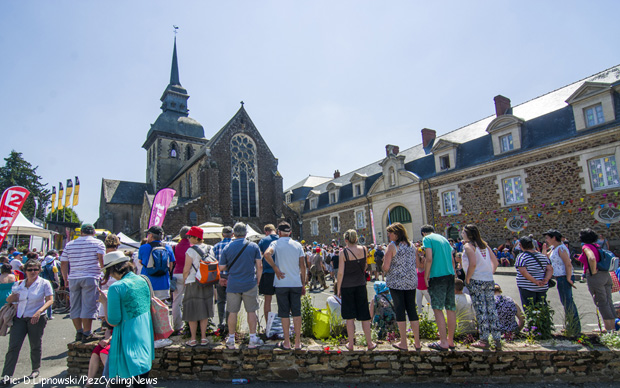 Fans watch the departure on screens in the town square in Saint-Gildas-Des-Boins.

Thanks for reading and tune in tomorrow for all the latest from the Tour as the riders take on the first individual time trial, and look for more on the PEZ Facebook page and the PEZ Twitter page.

Lotto Belisol: Roommates in the Tour