Roadside St.11: ‘Bus driver’ might not be up there on most people’s list of exciting jobs, but in the world of pro cycling, it’s something only a few people are qualified to do. PEZ-Pal Danny In ‘t Ven invited us inside for a tour of the Trek Factory Racing team bus.

For the Tour’s first Rest day, while the rest of the cycling press was busy chasing from hotel to hotel for the scheduled 1 hour q & a’s with riders who’d rather be resting, we tee’d up our own meeting with long time PEZ-Pal Danny In ‘t Ven – driver of the Trek Factory Racing team bus. 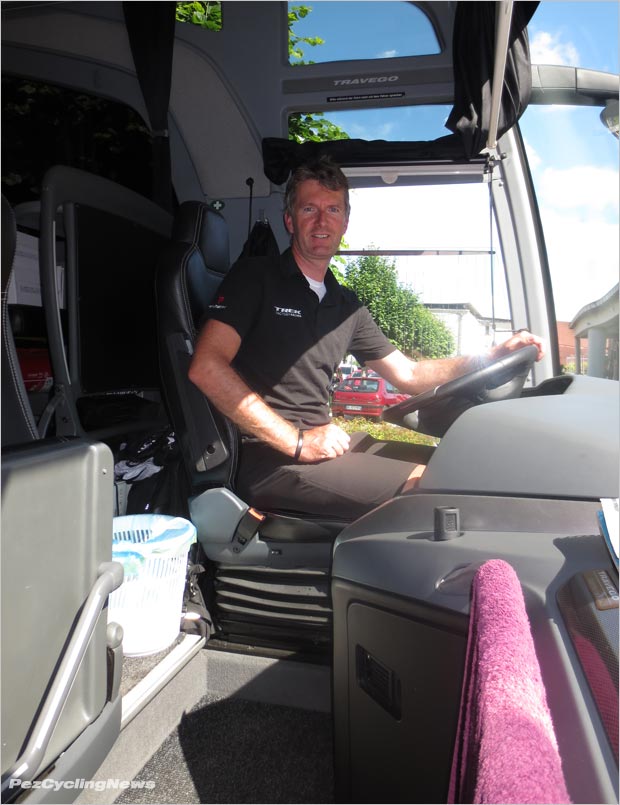 I first met Danny at the 2007 Giro d’Italia when he was driver for Team CSC – we were both guests at one of the finest dinners I’ve had. He’s been around cycling for more than half of his 45 years- first as an amateur & pro racer, but his path to driving the team bus is worth noting. 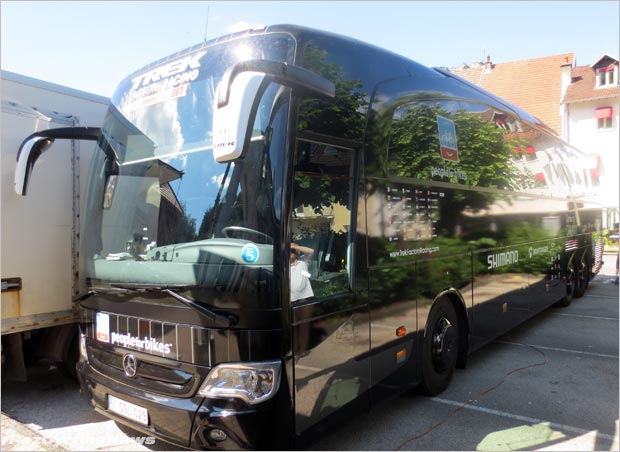 After his cycling career, he learned how to drive a bus and took a job with the Belgian government, and its secured future and pension. But the call of cycling was never far from his heart, and around 2005 Danny was contacted by Team CSC, who were looking to add a second bus to their program, and needed a guy who knew both the world of pro cycling, and also how to handle a large bus with important cargo. Danny was a hot prospect because he knew both jobs – a rare combo. 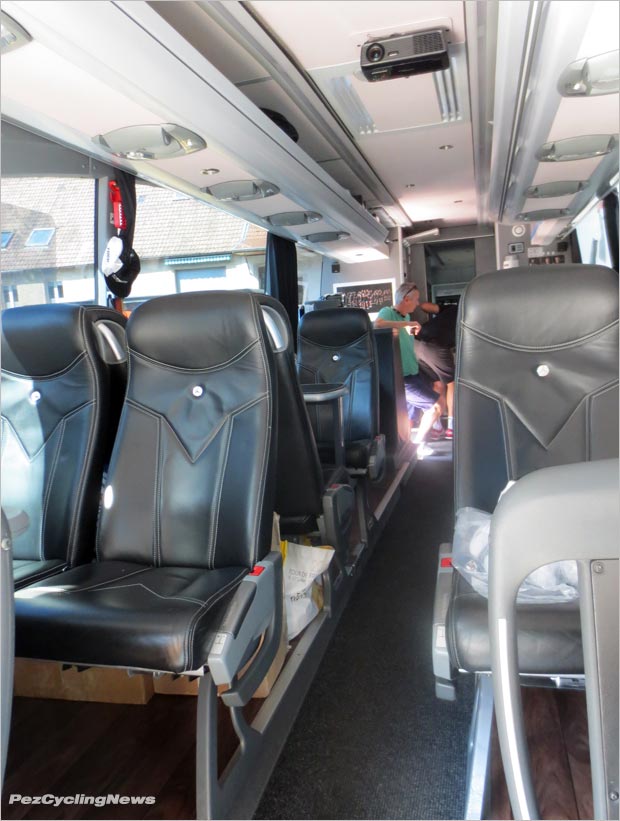 Custom leather seating for all.

At first he hesitated, unwilling to leave the security of the government, but he did agree to join the team for a small stage race here and there, using his vacation time to test the waters as a member of the support staff at CSC.

Fast forward to now, and he’s pilot of one of the biggest team buses in pro cycling, but as I learned on our tour, he does a lot more than just drive. 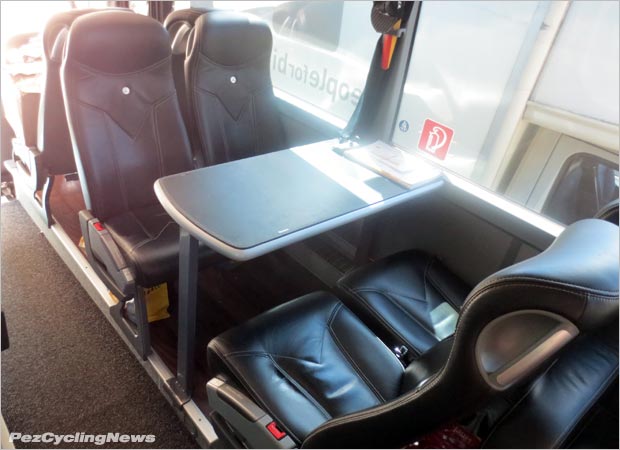 Being on the road 200 days a year is tough – and requires the full support of his wife and 6 year old daughter. One upside is that he’s home full-time for 2 months in the off season, but that’s just one of the sacrifices to being in pro cycling. 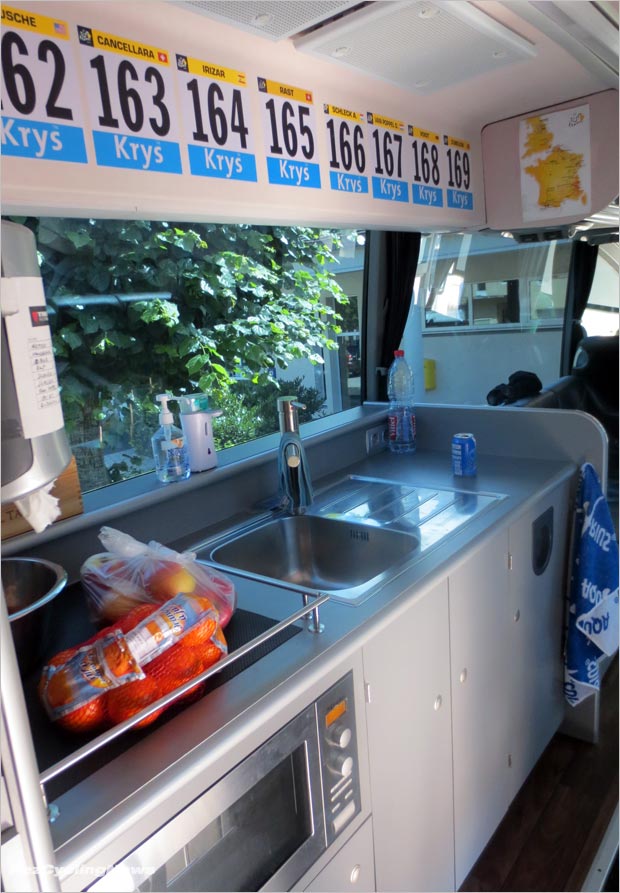 The seating is mostly in front, while the middle section starts with the kitchen. Danny’s added some homey touches, like the riders’ numbers. 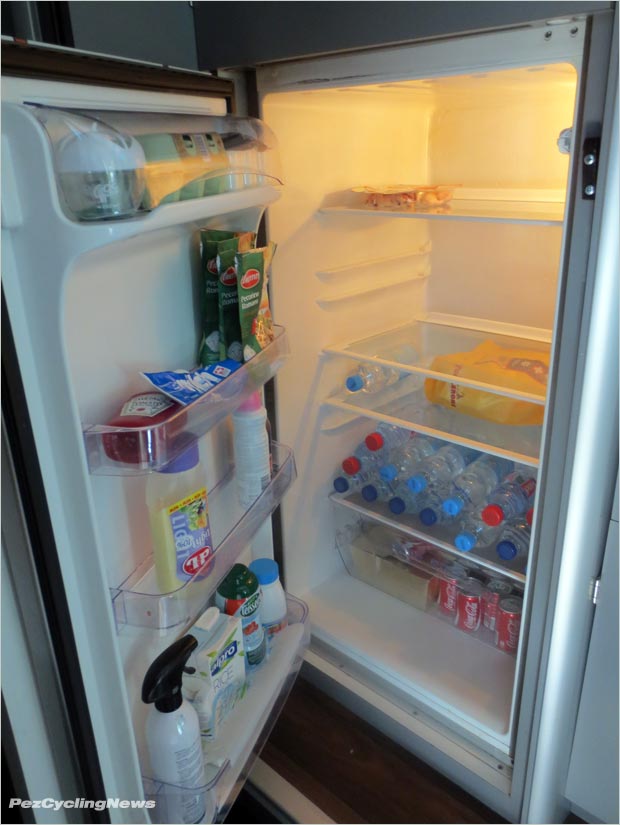 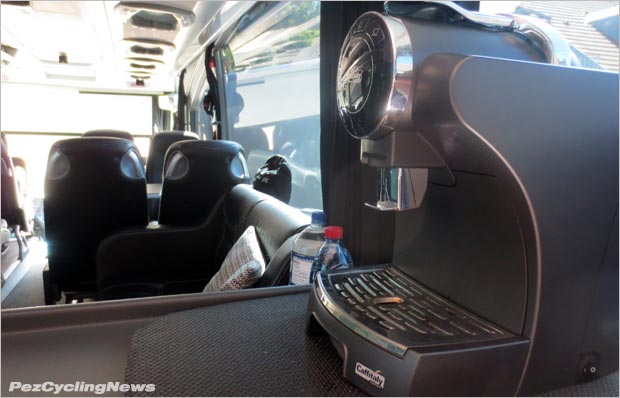 Remember when espresso machines started showing up on team busses, and we thought it was the coolest thing ever? Even if there’s one of these in every house nowadays, it’s still pretty cool.

After battling mid day traffic and TDF road closures in Besancon, we found our way to Trek Factory racing’s hotel some 20km out of town in a small village in the French countryside. Danny was out for a ride – a rare treat for pro team support staff at the Tour – but welcomed us straight onto the bus when he returned. 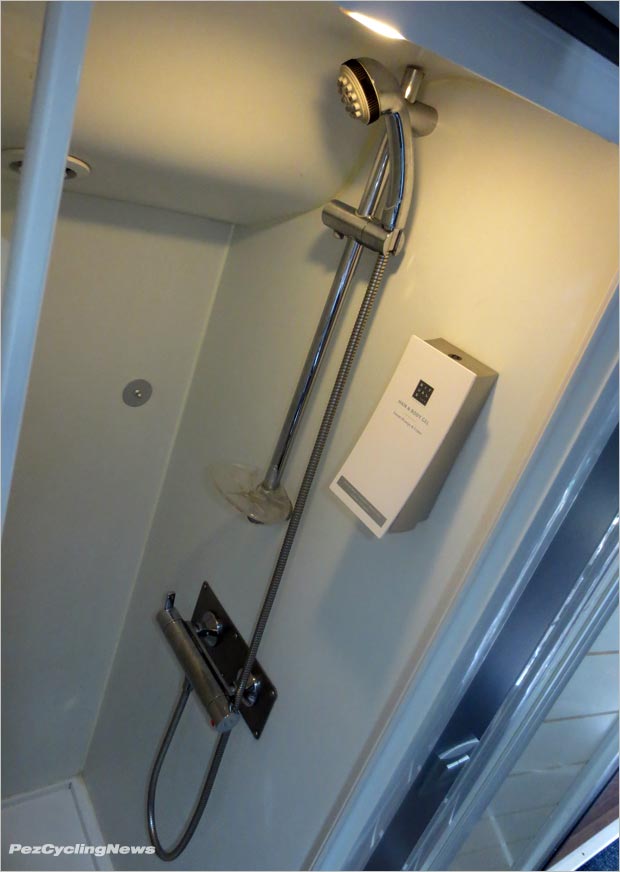 Not one, but two hot showers. That’s gotta make the ride to the hotel a whole lot better – for everyone.

He was keen to show me around, and conducted our tour like a proud manager showing off his place of business. The bus is Danny’s realm, and he treats it with an earned sense of ownership. The team bought the bus new 2 years ago, and will typically keep it for 6 seasons before selling it for a good price.

This one is a Mercedes, and features rear wheels that turn, which comes in handy getting this thing into Europe’s smaller streets.

Danny is like a one man show here – handling everything from stocking the bus with groceries and ride food, handling all his own navigation and leading the way to and from races (he uses a combo of gps and old-school maps) – to of course driving the beast. 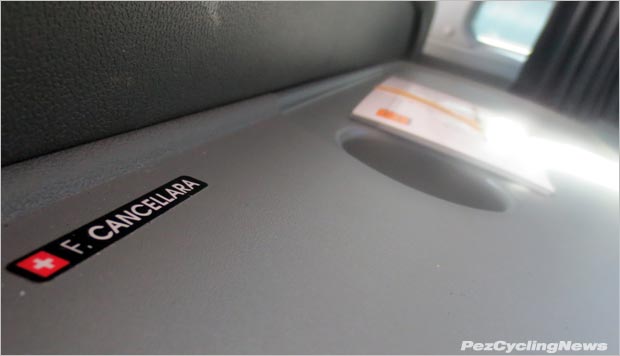 Seating is usually first come first served. While team leaders will usually get the more spacious accommodations in the back, everyone else gets to call their own seat, but riders tend to stake their spot in the bus for the whole Tour. Unless you’re name is Fabian Cancellara – in which case you get shotgun. 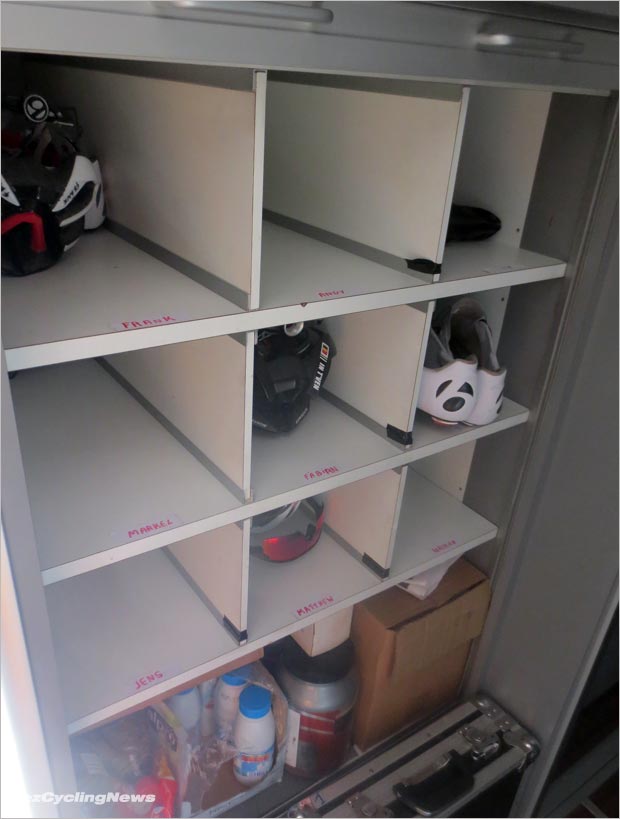 Danny had cubbies installed so everyone has a place for their helmets and shoes. 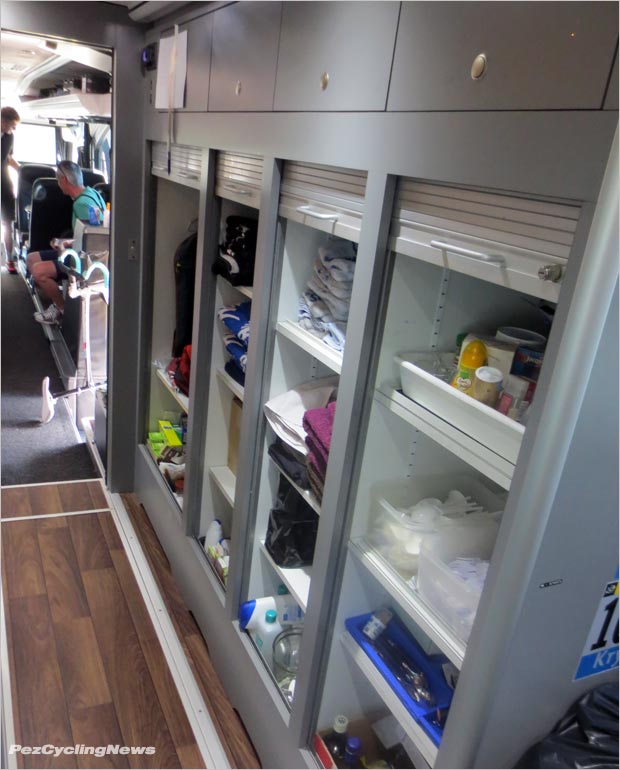 The amount of bike-stuff storage is enviable. 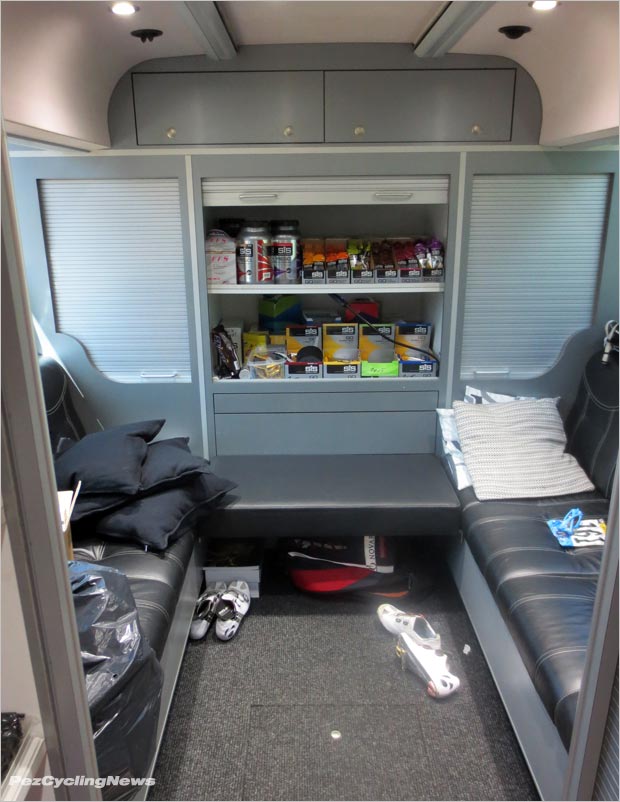 In back is extra seating usually reserved for two team leaders. There’s enough room to stretch out, and the whole thing converts to a bed like you’d find in any luxury camper. 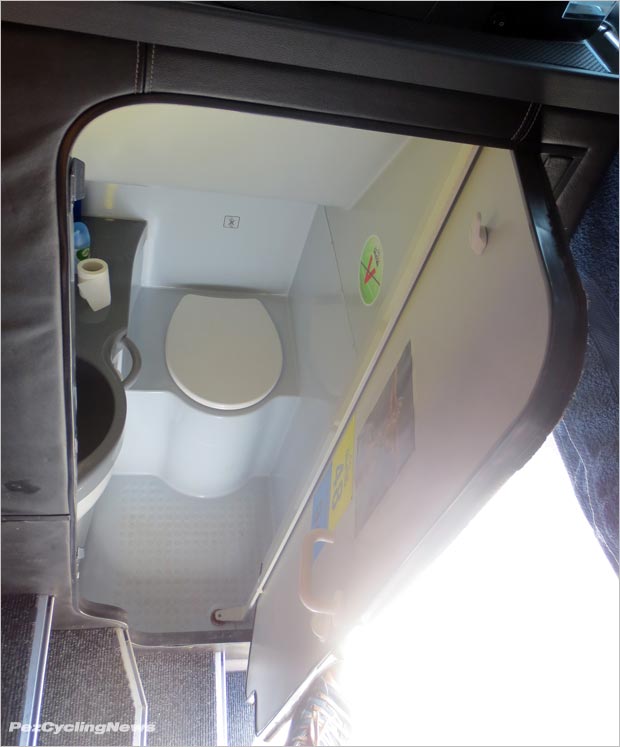 The toilet is just inside the bus’s rear door, and actually quite private. The ceiling is sloped to make room for a small table up in the main cabin, making it a tight fit inside the john. Danny asked the team owner for a bigger toilet if Fabu won Flanders – which he did. Still waiting on that toilet though… 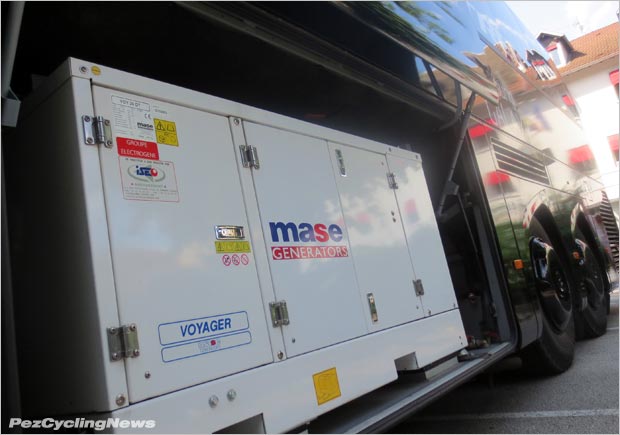 The electrical power generator is huge and sits under the bus. It’s powered by the bus’s main petrol supply (which costs about 700 euros to fill the tank). 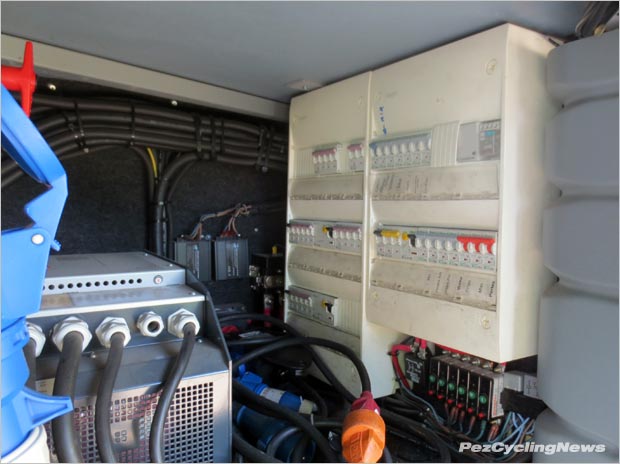 Even the fuse box is impressive. 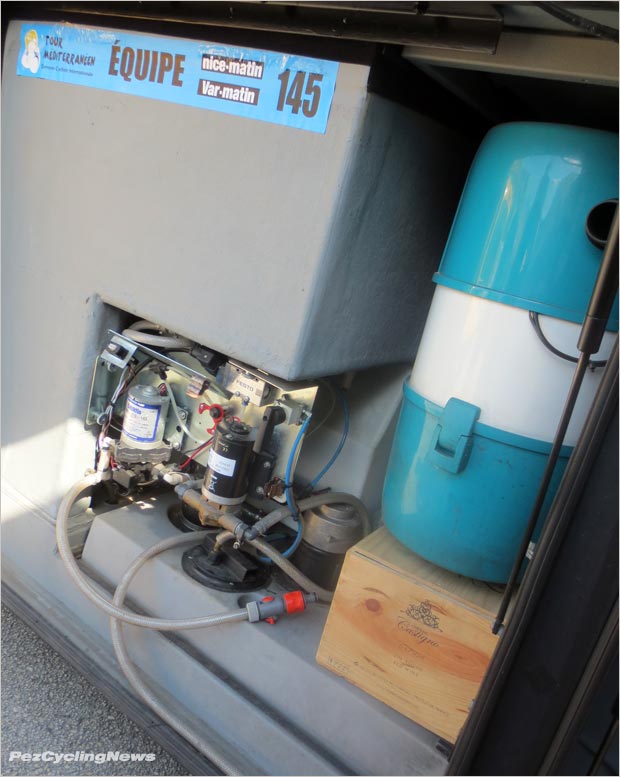 That’s one big boiler – that heats the showers and laundry facilities (below). 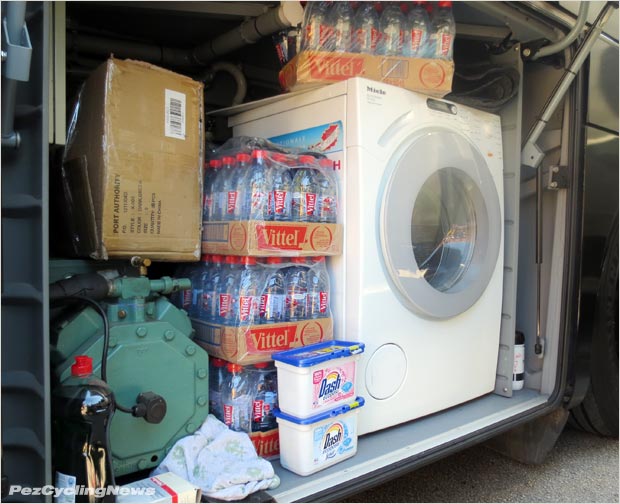 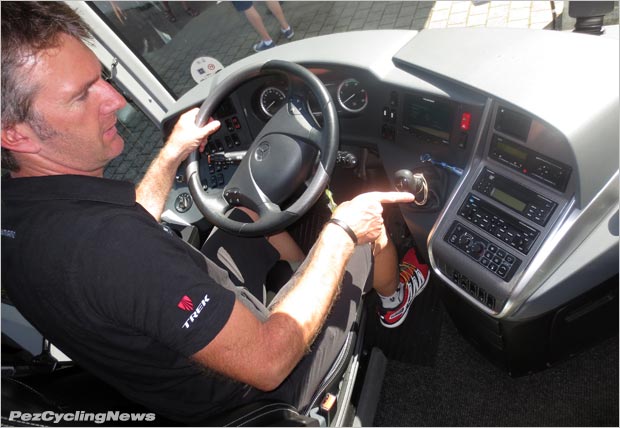 But the most impressive item was the fully wired Bose stereo – complete with disco lights, and huge shade screen that covers the front window and doubles as the screen for movies on long transfers. Danny runs the music too – he said a mix of euro-pop and rock to keep the guys relaxed, or pump ’em up when the team wins.

Throughout our tour, Danny was scurrying about, picking up after the riders and putting a few things away to clean up an already tidy bus. He did a fantastic job of giving us some treatment I bet a lot of other journos wished they’d gotten on this rest day.

Thanks again to Danny – that was certainly worth fighting French rush hour for.

Northwave Back to the Etape du Tour in a Main Role