Roadside St. 8: The race had it’s first date with the mountains today as Les Pyrénées mark the first mountain experience in the 100th edition of Le Tour. And what a day it was – I took the first shift driving today, as it was scheduled to be a long one with a very intense section towards the end of the day with the hors category climb, the Col de Pailhères. I wanted to photograph this massive climb into the snow capped mountains, and give my driver a break in the morning, as we knew the second last climb of the day would be a killer. 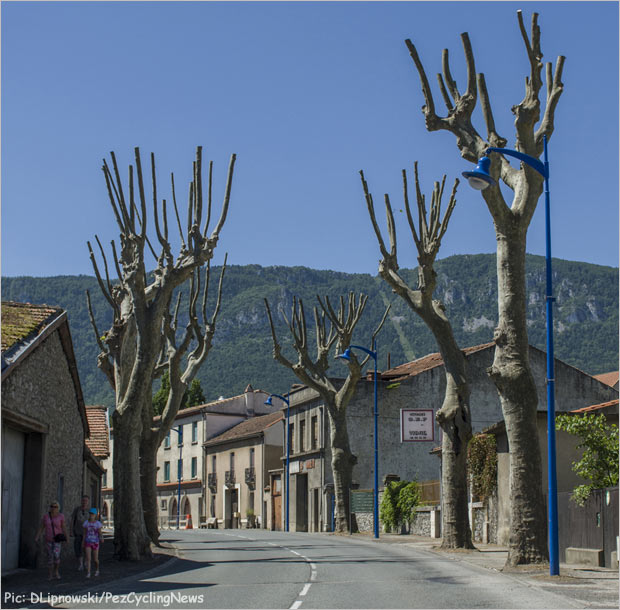 I quite enjoyed the drive this morning with these unique trees leading up to the sprint point.

The course leading up to the two big climbs was quite beautiful. The race went through some carved out roads that ran beside rapids, and the sprint point was accented with some unique looking trees as well. I drove a good section of the empty race course ahead of the caravan, and took the first and only break of the day for lunch in a quaint little town called Exat around 1pm. 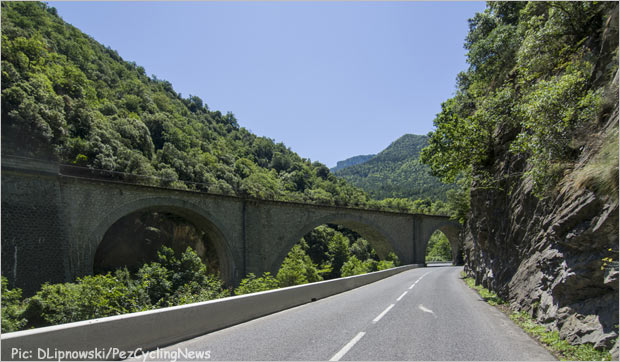 Getting out of the car, I discovered that I had a bit of an unequal sunburn with my left arm a little more pink than my right arm after the drive. We bought some salami from the butcher, a baguette and a pain au chocolat from the bakery, and a popsicle from the grocer. I had about half an hour before the caravan came through town, and tried to find someone for my portrait a day challenge. I was hoping to have run into the devil, Didi Senft by now, and I hoped I would see him on one of the big climbs today. I figured that I should try to do a portrait in this small town as a backup, just in case El Diablo alluded me again. 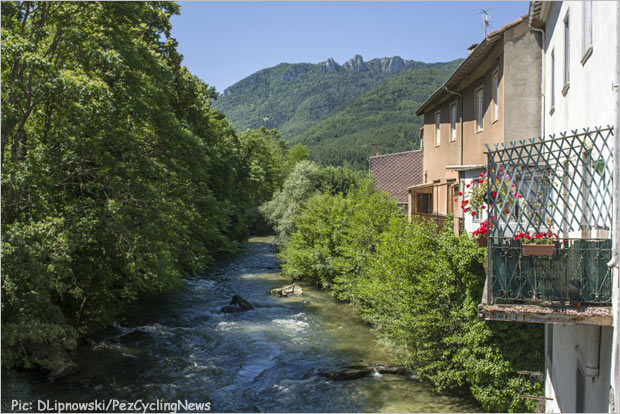 Had a nice lunch in Exat, and made a portrait of Emil.

There was a boy with the blondest hair sitting beside us on the street, and I asked his mother whether it would be ok to make a portrait of him. Emil and his mother Sara are from Denmark, and have a summer home in Exat. Apparently a lot of Danish people have bought properties in the small town. Though his mom spoke english, Emil only spoke Danish, so his mom acted as a translator between us. She told me that though she and Emil are not really into competitive cycling, they do cycle everywhere in Copenhagen. They are vacationing at their home in Exat, and like everyone else in town, came down to the main street to see the race/party go by. When I asked what Emil likes to do, his mom told me that he loves break dancing. 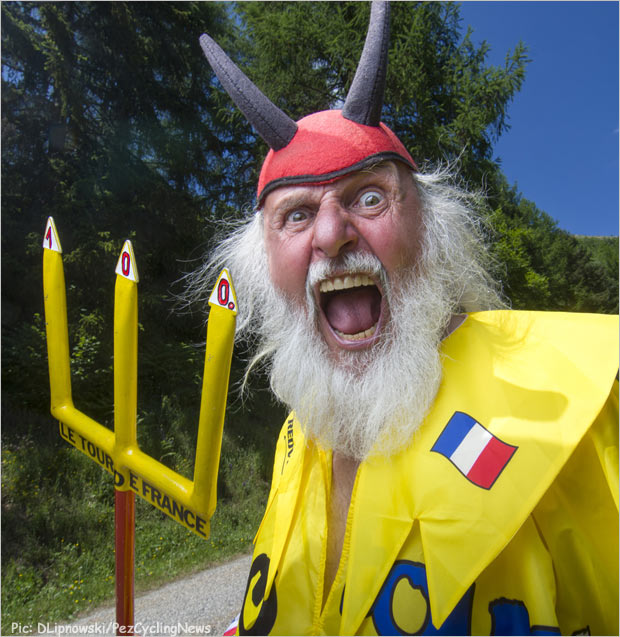 After the caravan passed through Exat we got into the car to follow the caravan to the top of the Col de Pailhères. And what a mountain it was! The drive to the top was unlike anything I’ve ever experienced. There are thousands of cheering fans along the 15KM uncategorized climb, and many of them are lunatics. The first highlight of the climb was meeting and photographing Le Tour devil, Didi Senft. Though it was incredibly awkward to park the car just off the race course on such a steep incline, I had to get out and talk to him. He didn’t speak much english (he is German) but it was a pleasure meeting him. Without asking, he automatically did his signature look. He also did his signature jump, and it was tough to pick just one image to post for my portrait a day project. The caravan, the fans, the media, and everyone else love this guy, and stopped to get a photo with him, clogging the narrow mountain road while trying to do so. 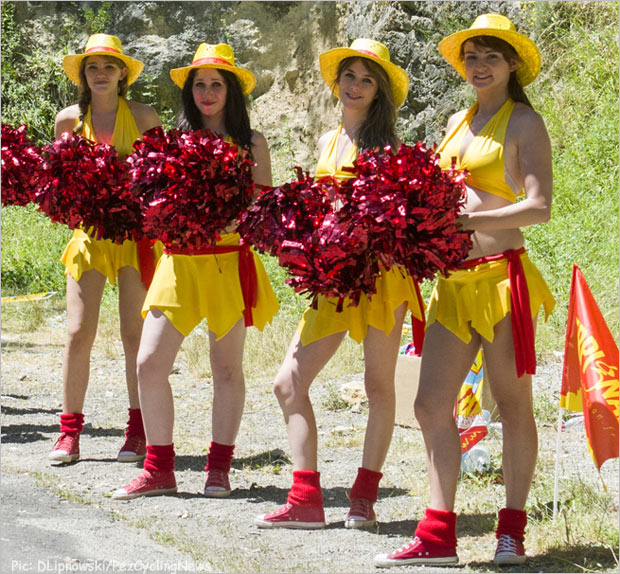 Cheerleaders along the route.

Meeting Didi was incredible, and the drive to the top kept getting better with every tight turn. The fans are amazing, they are so friendly, and have such a high level of energy. The only negative experience we had driving to the top was a couple of lunatic fans that threw water through our open windows, soaking my partner and me, as well as my cameras. It was not fun trying to dry cameras and lenses while taking really technical roads at steep inclines. 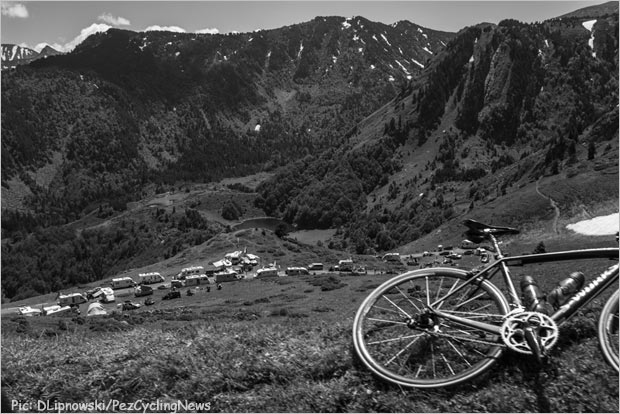 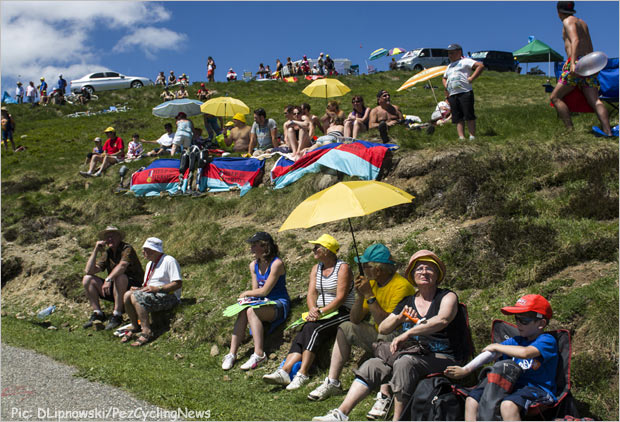 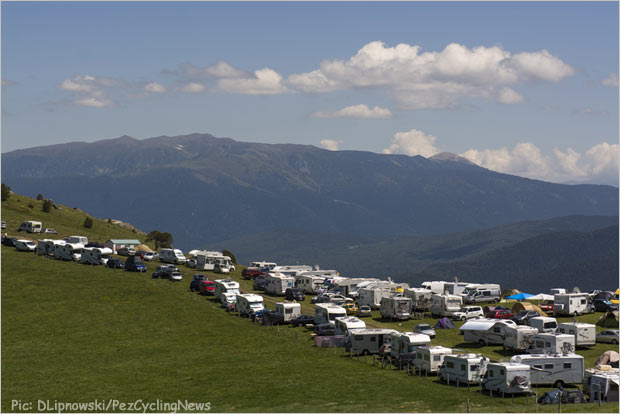 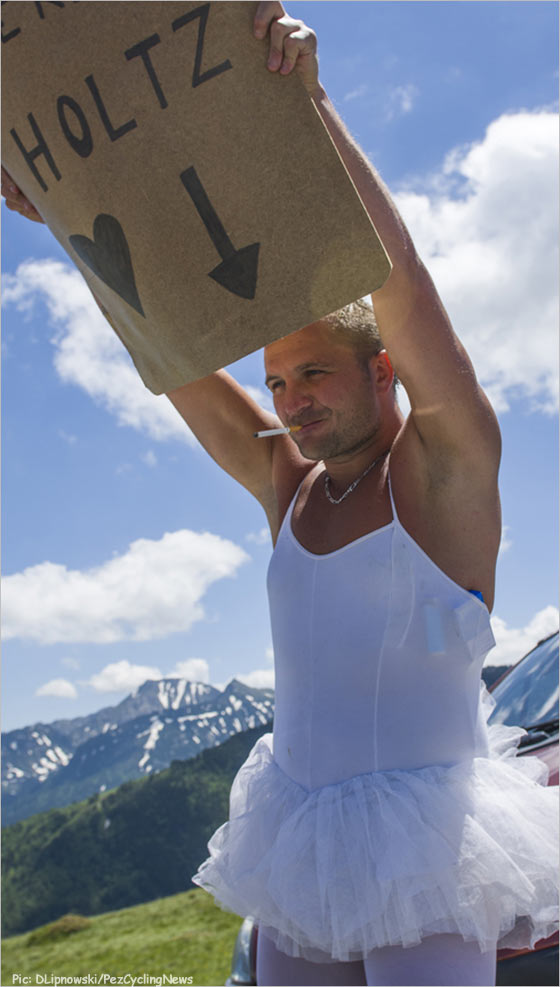 All sorts of fans along the climb. 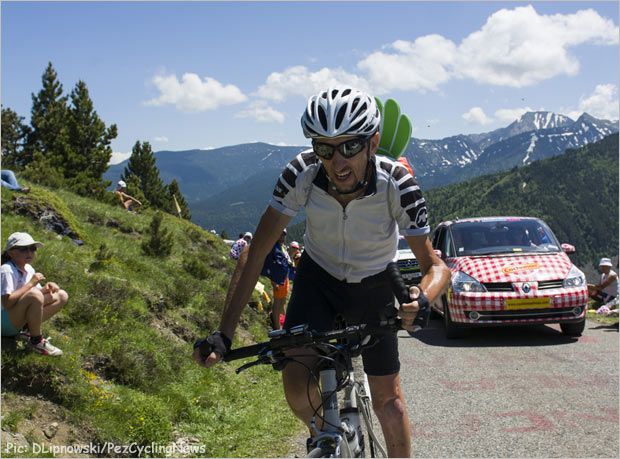 It was incredible to see this man riding up the Col de Pailhères only peddling with one leg. 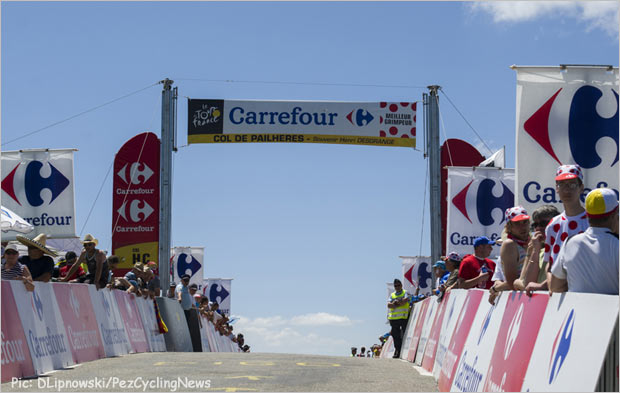 We made it to the top.

Once over the top of the mountain, it was a long technical descent into the breathtaking town of Ax-Les-Thermes. The valley vacation town is extremely picturesque, and I honestly don’t think the images made under mid day sun do it justice. The town is known for it’s thermalism, the therapeutic use of hot-water springs, and people flock there to try to be cured of their ailments. These procedures are of course done at highly expensive hotels. Our hotel in Foix (40KM from Ax-Les-Thermes) didn’t offer this, but it did have a decent pool. 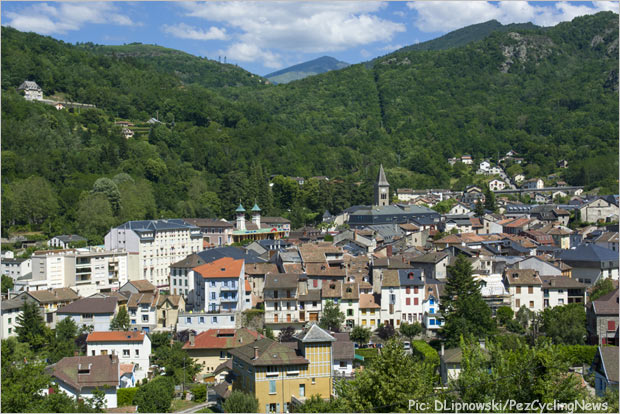 Quite the view of Ax-Les-Thermes. 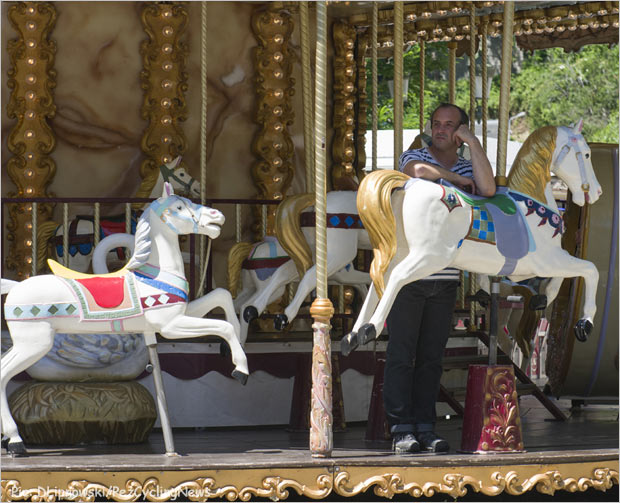 Waiting for the big show to roll through Ax-Les-Thermes.

We parked the car in Ax-Les-Thermes, and hoofed it about 1.5KM up the final climb to Ax 3 Domaines. We met some friendly Aussies from Canberra along the course, and waited for the race to come up to us. We knew it was close when the helicopter started hovering over our heads, and saw Movistar’s Nairo Quintana of Colombia leaving everyone in his dust. Just a few moments later the sky train rolled through with Chris Froome looking well protected in third position (though it looked like they were hurting going up the steep sections). It was disappointing to see some of my favourite riders several minutes behind the main Froome peloton, but there is still two weeks of racing left to go. 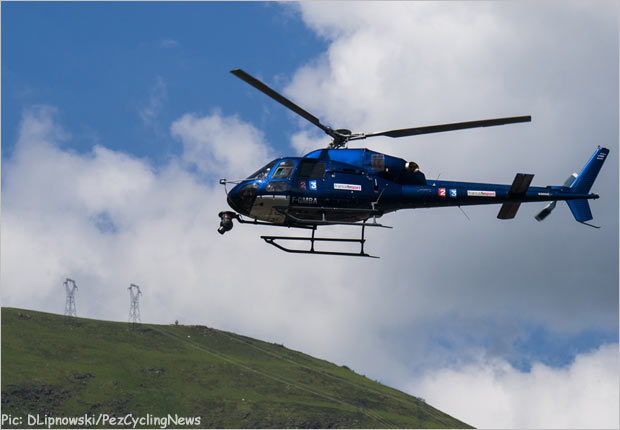 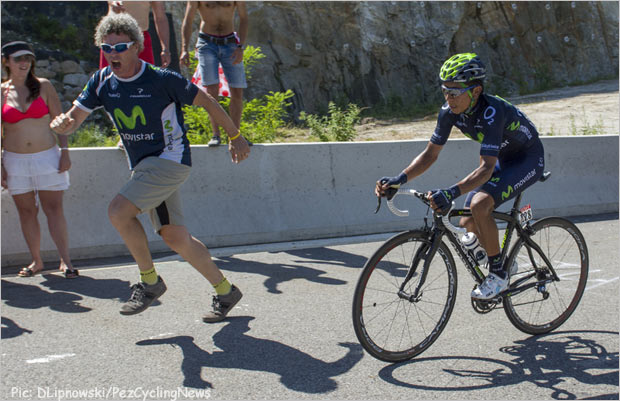 Movistar’s Nairo Quintana of Colombia broke away, at least for a while. 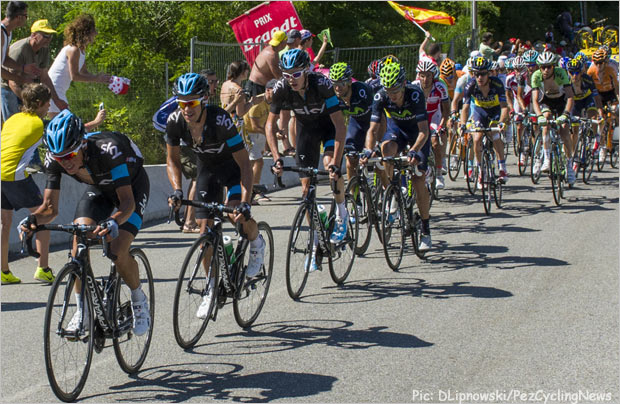 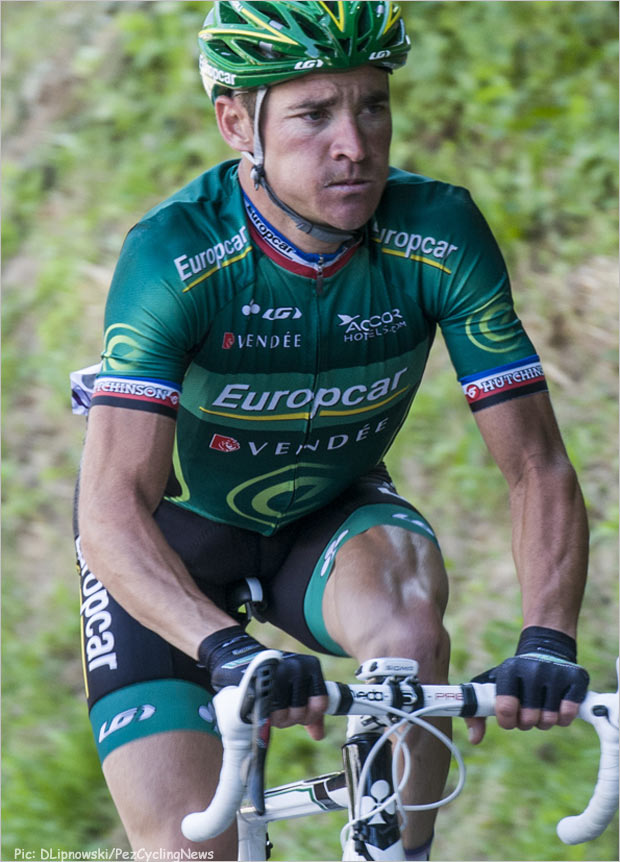 Thomas Voeckler looked like he was suffering towards the start of the Ax 3 Domaines climb, several minutes back from the peloton. 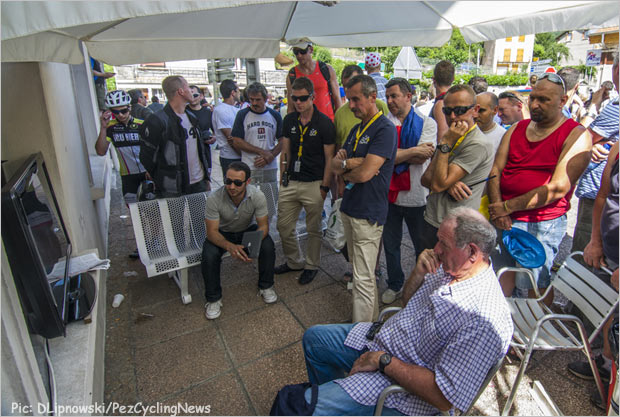 Eyes glued to the tube with a few minutes remaining of the Ax 3 Domaines finish.

Thanks for reading and tune in tomorrow as the race hits the high mountains, and look for more on the PEZ Facebook page and the PEZ Twitter page.

Lotto Belisol: The men behind the bikes