Roadside St.16: The PEZ Roadside Crew rumbles onward to the gateway to the Alps and that ever popular Tour town of Gap. Today’s stop: the final climb where the battle continued – we’re on the Col de Manse, late afternoon some 1,268 metres above the finish. 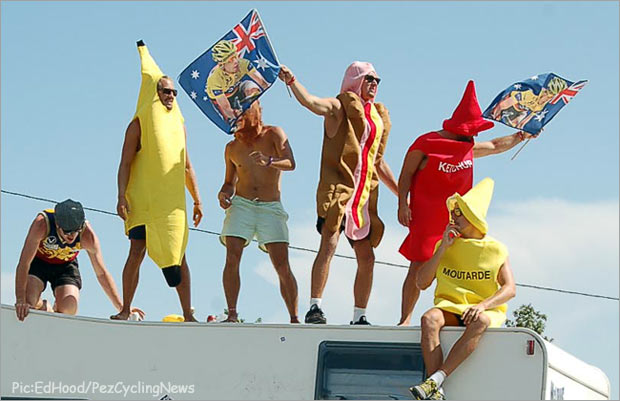 We’re with the Aussie ‘crazies’ near the summit. It’s 30 degrees in the shade and below us on the Col, the break is falling apart.

A big group has been most of the day; world champion Phil Gilbert (BMC & Belgium) is there, Tommy Voeckler (Europcar & France) and talented Portuguese Rui Costa (Movistar).

We watched on the TV screen at the Refuge Napoleon, 200 metres up from the car – Biel Kadri (AG2R & France), Jean-Marc Marino (Sojasun & France) and Adam Hansen (Lotto & Australia) all try to break the elastic but they either ‘pop’ or get brought back.

Costa goes – and he’s serious. This is a man who’s won the Tour de Suisse, twice. He can climb – and descend. 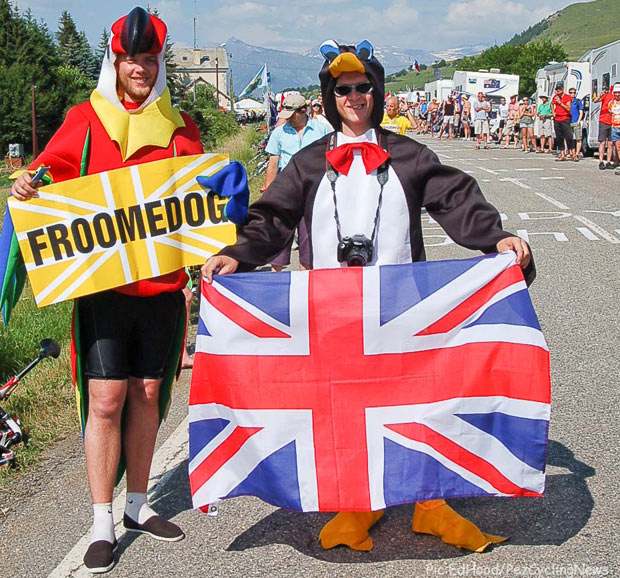 ‘I’m a penguin!’ says the beast – well north of its usual habitat.

‘Sorry pal! how stupid of me,’ I quickly apologise. I take his picture and our Antarctic chum seems to be placated… 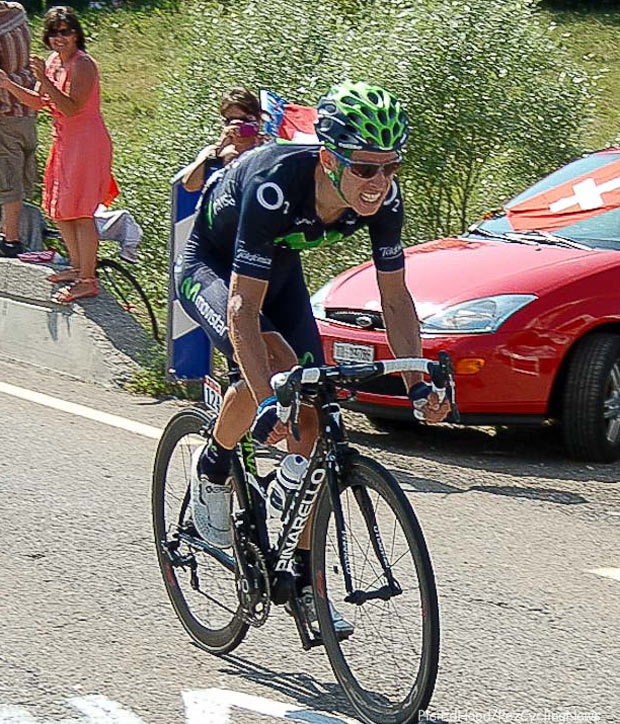 Costa is ripping, he’s the winner – they won’t catch him. Those Movistar boys sure know how to race.

The rest of the break is scattered all over the hill – Andreas Kloden (Shack & Germany), Nico Roche (Saxo & Ireland), Tommy Voeckler, Johnny Hoogerland (Vacansoleil and The Netherlands) . . . 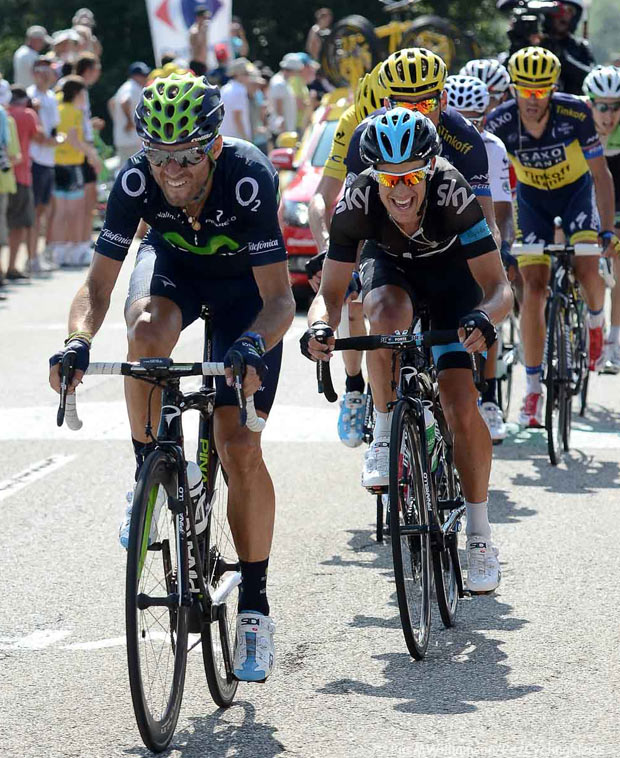 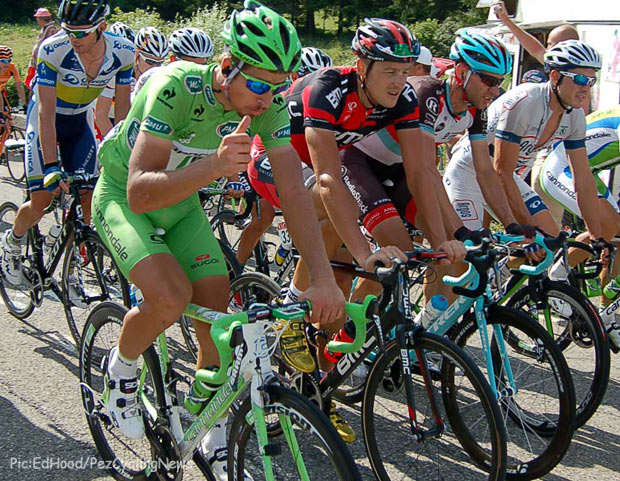 After that there are riders all over the hill with Sagan again looking the worse for wear – but he gives PEZ the thumbs up. As we say in Scotland; ‘he’s an awfie laddie!’ 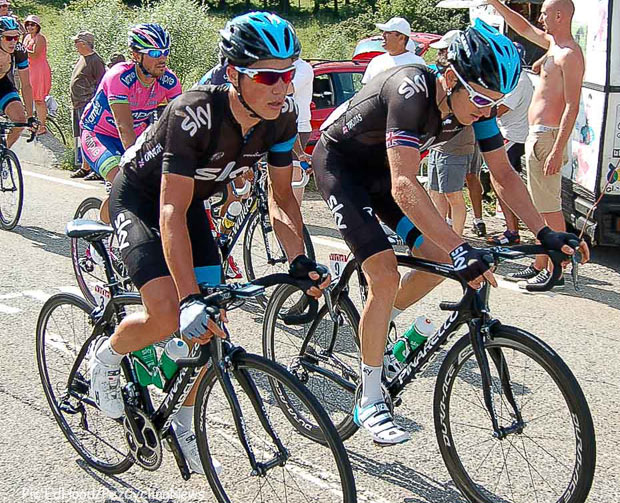 Sky’s English pairing of Kennaugh and Thomas is stone last; wasted – working to defend the maillot jaune isn’t easy. Time for us to get off this hill; tucked in behind the sag wagon…

. . . . This morning in Vaison-la-Romaine it was business as usual after the rest day – humidity, buses, coureurs, dust, sun and le Ventoux still dominating the skyline.

Our first job is to track down Jack Bauer for a chat. There’s the Garmin bus, ‘Jack’s in the team meeting come back in 20 minutes.’ ‘No problem’ and we wander off in search of GreenEdge spanner man, Craig Geater.

Apart from chatting about the team Scotts, we know he’ll have scissors – my long sleeve T-shirt needs ‘adjustment.’ We bump into Daryl Impey at the GreenEdge bus – Africa’s first ever maillot jaune and now a big fave with the crowd. He’s come a long way in a short time but is still the same grounded guy. 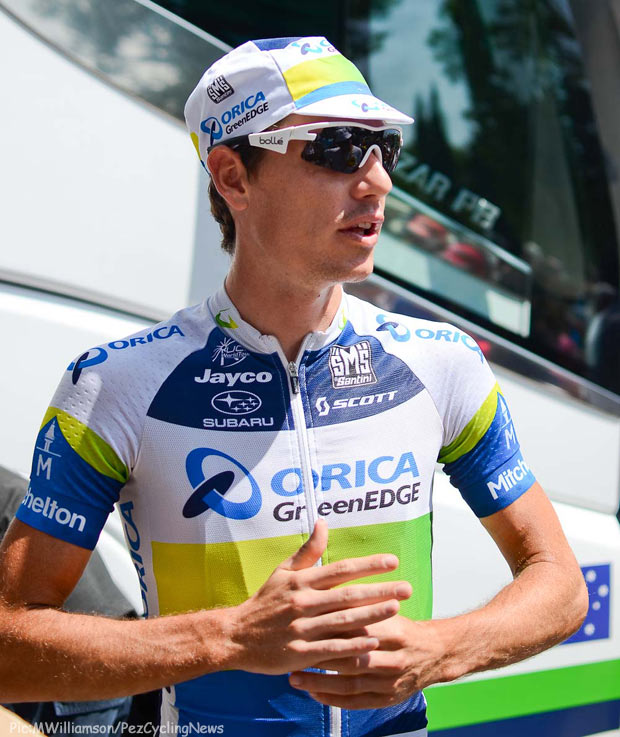 The GreenEdge Scott’s have concealed batteries for the Di2 shift – so much nicer than a half brick zip tied under the down tube. The battery is a long cylindrical number, concealed in the seat pillar, charged through the Di2 control box. And then the man from New Zealand shows he’s as good with scissors as he is with allen keys and spanners, surgically removing my T-shirt sleeves. 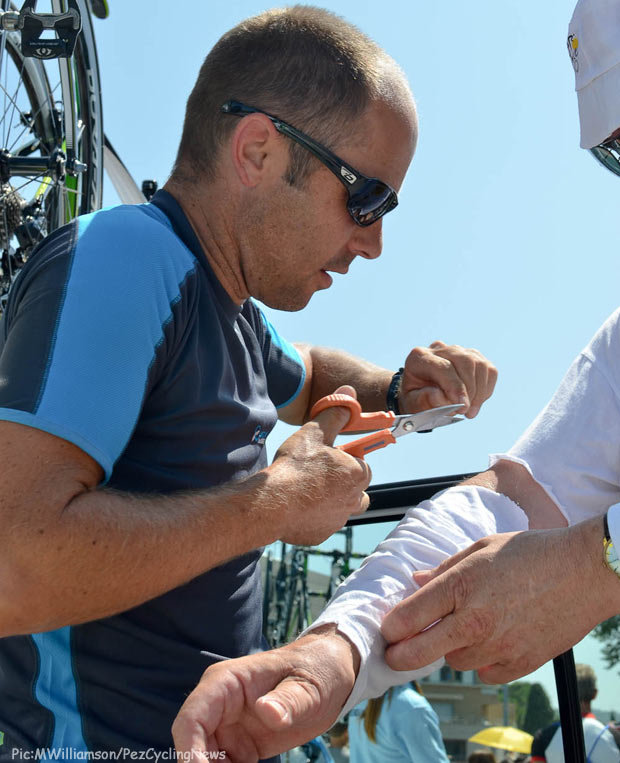 That’s cooler! But he’s a professional, ‘wait’ he says and gives me a skoosh of sun screen to both arms. Cheers Craig! 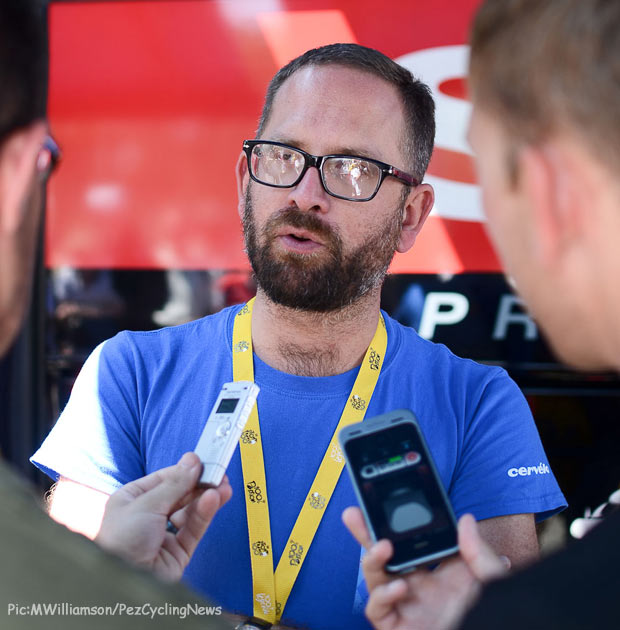 Back to the Garmin bus where JV is holding court, with full facial hair – at least it’s thicker than Sagan and Degenkolb’s efforts at moustaches, but a little ways behind Brian Holm’s ‘Chewbacca’ replica. 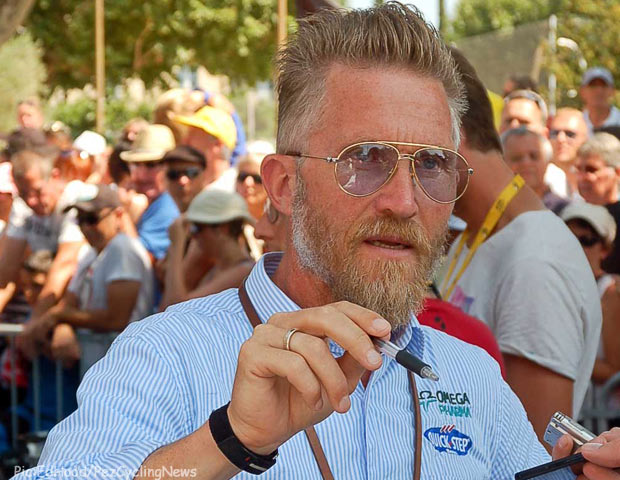 More waiting; Ryder pops out to show himself to the Canadian fans. 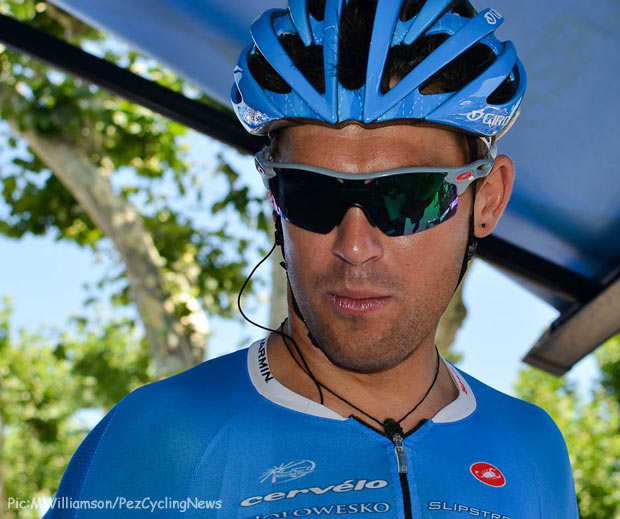 And there’s our boy, looking taller and more handsome than ever and exactly the same young, laid back Kiwi who came to try his hand in the kermises . . . We’ll get that interview to you in the next few days.

The countryside after the start is beautiful – perfect for riding a bike through. Just not at 50 kph. It rolls then drops to the start of the first climb, wide, well surfaced, open, and sore after the rest day. It’s a third cat – that just means they go faster.

Just after Kilometre zero we saw Lampre and Movistar riders loosening their legs so as not to get caught out. It could be an ambush day? 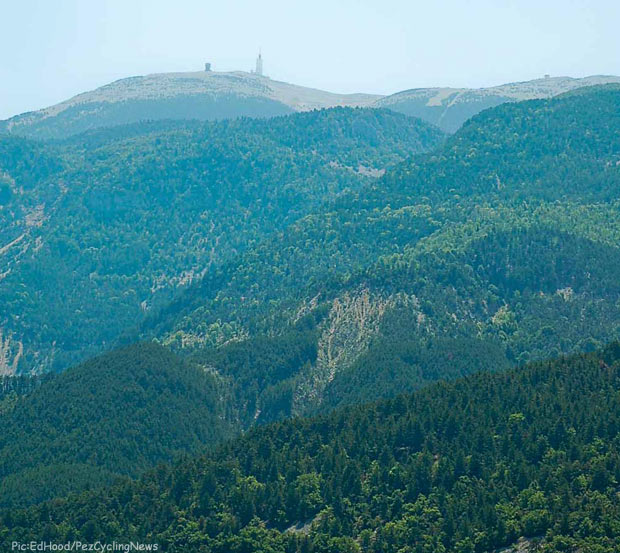 The descent is fast, not too technical down through scrub with the Ventoux ever vigilant over to our right. It’s fast, flat but twisty enough for a break to get out of sight off the descent – and it’s windy, very windy. 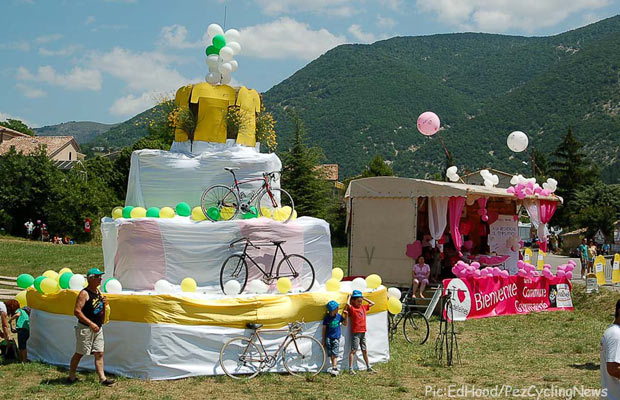 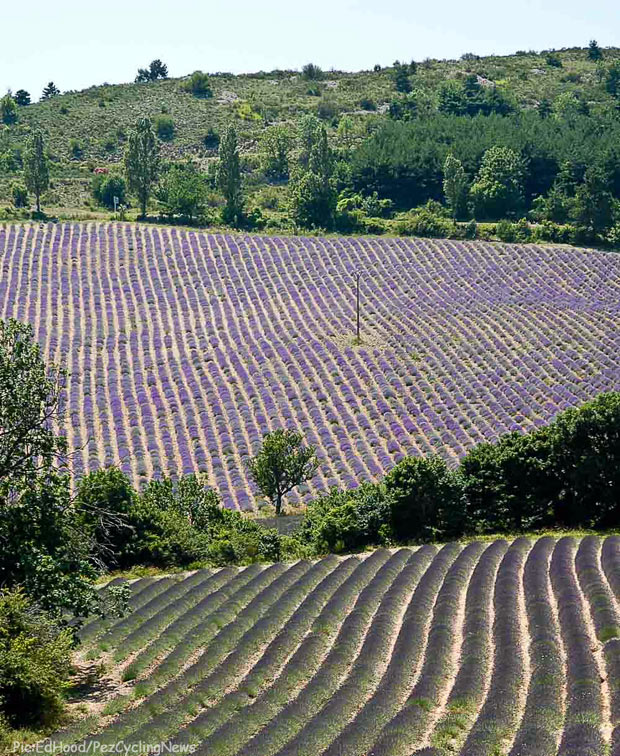 There are lavender fields all around and the smell is divine.

An old local is waxing lyrical to me about the beauty of his village from the centre of the road; meanwhile, the QuickStep people carrier is hurtling towards him. ‘Monsieur, le voiture!’ I warn him, he looks then shrugs and continues up the middle of the road. The people carrier has to brake and steer round him – ‘damn Belgians, this is MY village!’

The second climb, this one’s steeper, twistier and hotter at 30 degrees – there’s a fair crowd at the top before we dive down through lavender fields. It’s a long, long drop to the feed at exactly half distance, the bad news is that it climbs gradually for the next 50 K before dropping in to Gap then ramping up the second cat Col de Manse – where PEZ will embed for the day. 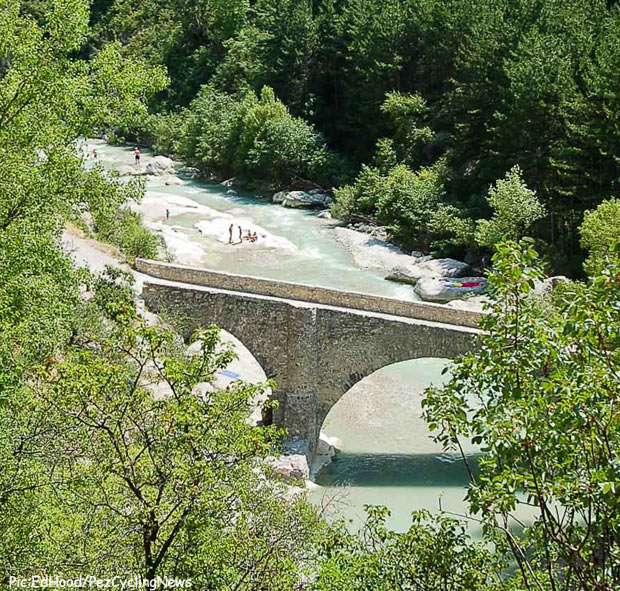 Approaching the feed the limestone scenery is stunning. Out of the gorges into the valleys and Nostalgia gives us the Village People and ‘YMCA’ – but the low roof on the Opel rather restricts doing the ‘Y’ gesture properly.

Les Alpes begin to fill the windscreen, with snow still visible in the high valleys. The race bible shows the trend upwards from the feed but it doesn’t feel that way from the car – flat and fast, more like. Long, long straights – not so good for a break to be out of sight, out of mind.

But it’s good for the Sojasun and Euskaltel team cars to have a chat. 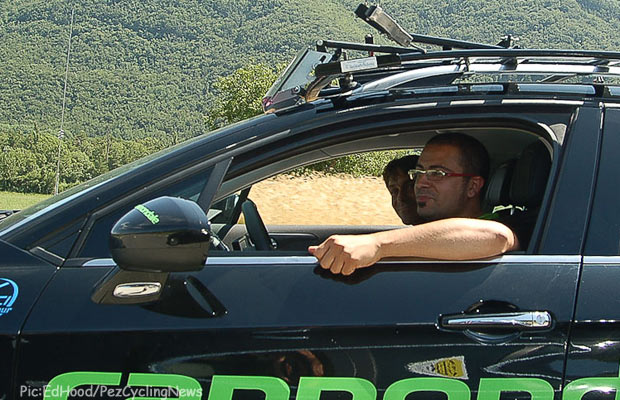 And for Cannondale PR Paolo Barbieri to come up and tell us that there’s a big break seven minutes clear with Voeckler and Gilbert – both men desperate for a win. Tommy for his adoring fans and Phil to break his ‘rainbow jersey curse’ and justify that fat contract he’s just signed. 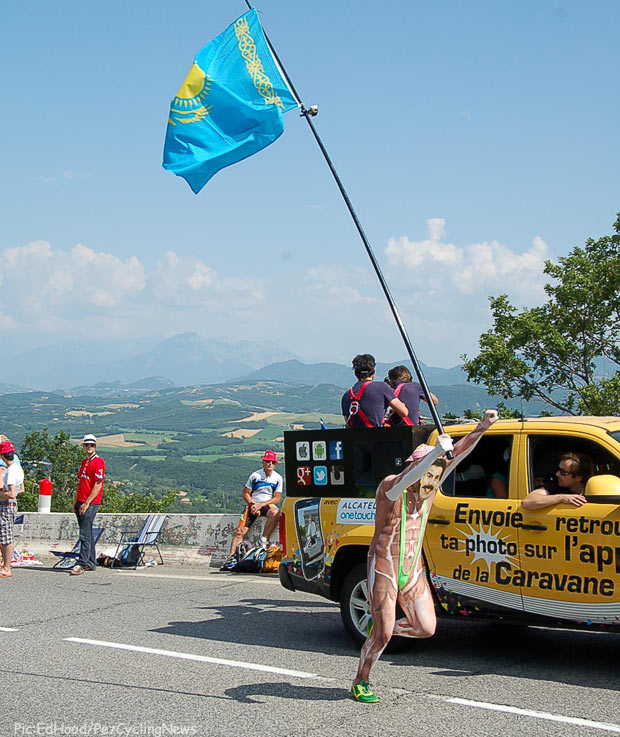 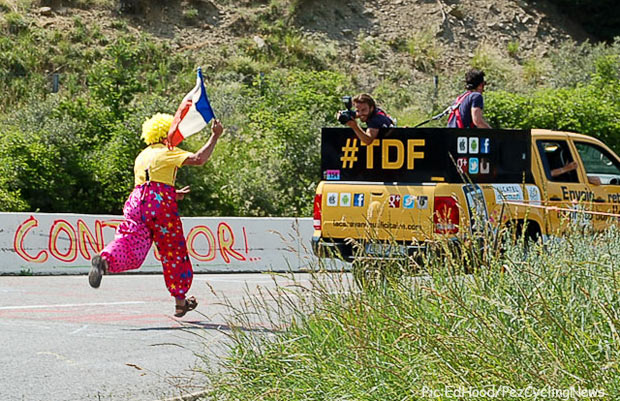 The crowd is good, the hairpins tight, the sun hot; and there’s all sorts up here, Borat, clowns and fans aplenty. 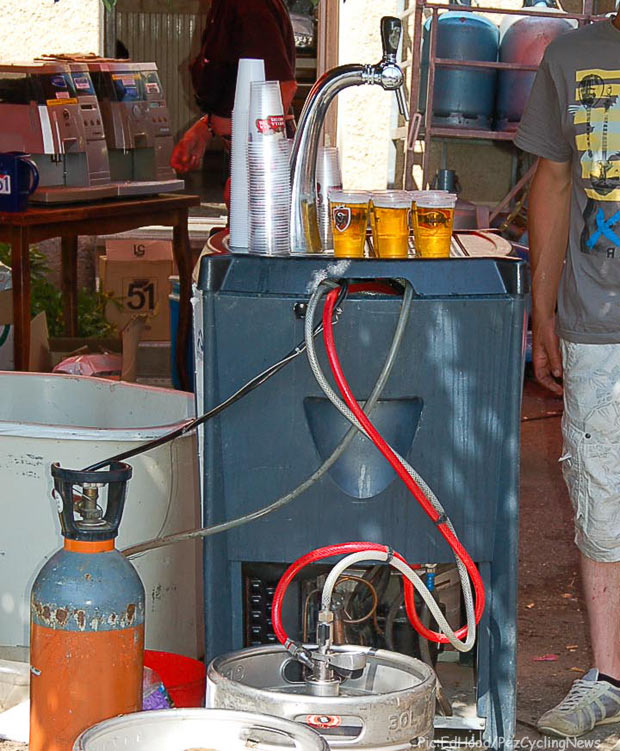 With 250m to go to the top, we park up and head for the Refuge Napoleon; a beer tent, lovely foaming pilsner – and a flat screen, this is paradise.

The attacks fly; then Costa goes – and suddenly there’s only going to be one winner.

Tomorrow’s stage 17 is Ed’s fave – the chrono, can anyone take time back on Froome? Be sure to tune in, and look for more on the PEZ Facebook page and the PEZ Twitter page.