Roadside Rest Day: A superb setting with top class food, wine, beer and more it was easy to see why our experienced Tour reporter Ed Hood headed to the Omega Pharma – Quick-Step media gig in Carcassonne on the Tour’s rest day. Mussels to eat and some tired muscled cyclists to interview were the menu of the day.

The setting is perfect, the PR girls are cuties, the moules and frites cooked to perfection, the pils is cold and dispensed from ice cool Airstream caravans, the freebies are nice – and Ale Jet even does his best to pretend he’s not hating every second of it. 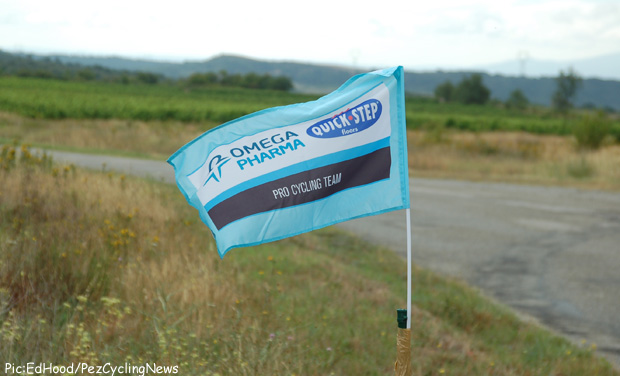 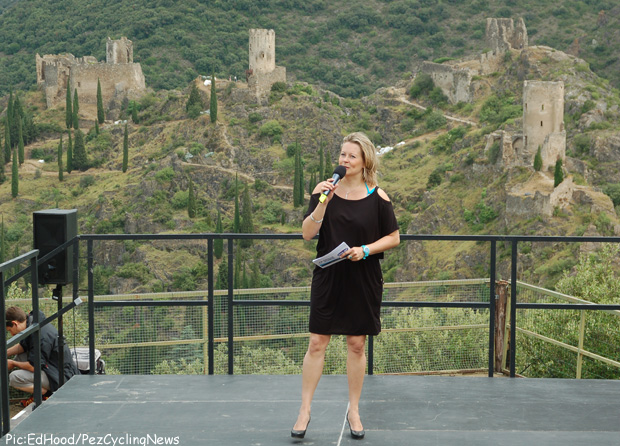 The press release tells us that ‘it’s a few kilometres from Carcassonne’ – it turns out to be a little bit more than that, on a hillside over looking the remains of a medieval castle above the picture postcard perfect village of Lastours.

Patrick Lefevre is there, low key but very much, ‘the man.’ 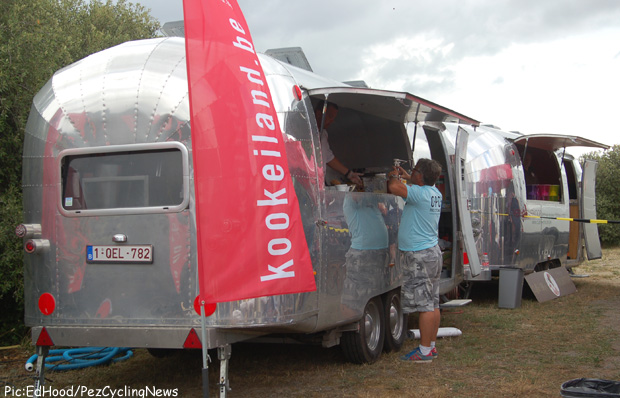 We get our free hat, T-shirt and tickets for free moules, frites and dessert plus ‘jetons’ (beer tokens) to exchange for pils – just like at the Gent Six Day. 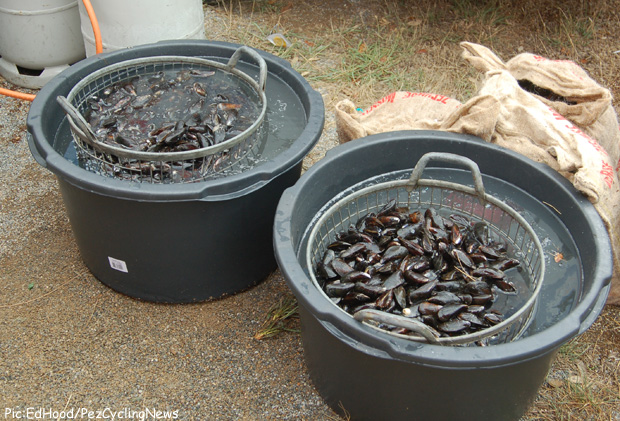 But before we attack the bivalvia molusca (that’s mussels to you and me) and the golden fluids it’s time to listen. 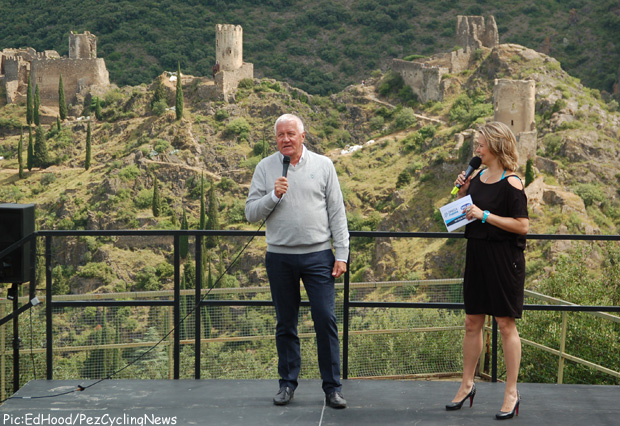 Patrick Lefevre takes the mic and reminds us that his team came here, ‘all for Mark Cavendish’ but immediately the Manx fastman crashed out on stage one they reappraised the situation and since then have won two stages and enlivened virtually every day.

As Mr. Lefevre tells us; ‘it’s better to win stages than to worry about finishing 11th or 12th on GC.’ He went on to explain that the team has notched up 46 wins this season, until now – last year the season total was 52, more than any other team.

Then it’s time for the sponsors; Latexco, QuickStep and Renson have all extended for two years – good news in these uncertain times. 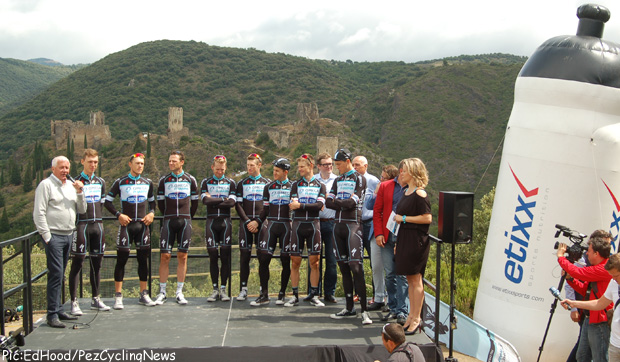 QuickStep have been on board for 16 years and later Lefevre is proud to explain that all of the team’s primary sponsors come from within 20 kilometres of each other. 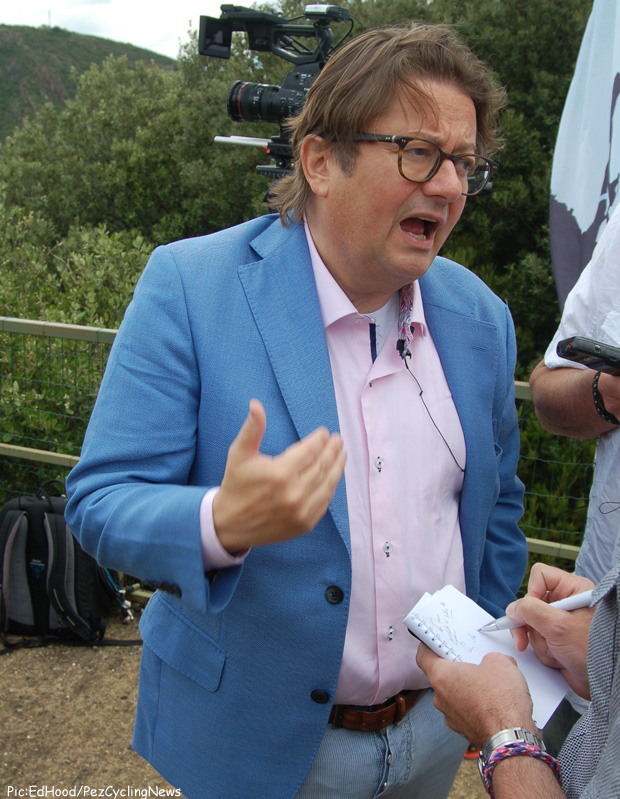 Mr. Marc Coucke the Omega Pharma supremo takes to the stage to announce that for 2015 and 16 the name on the jersey will be Etixx. Etixx is a range of nutritional supplements manufactured by Omega Pharma which the pharmaceuticals giant is rolling out world wide. 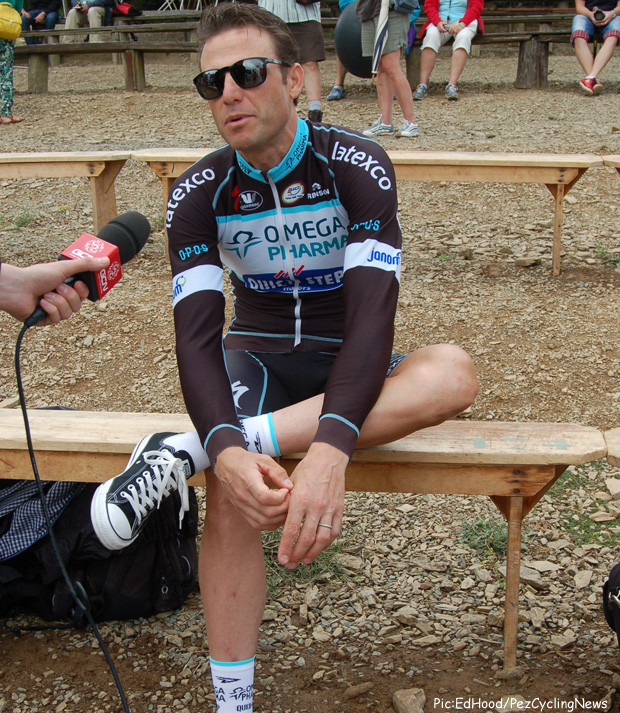 Then it’s photo op and interview time; PEZ goes for fast man Mark Renshaw as Ale jet wishes he ‘really, really should be somewhere else’ – as the song goes. 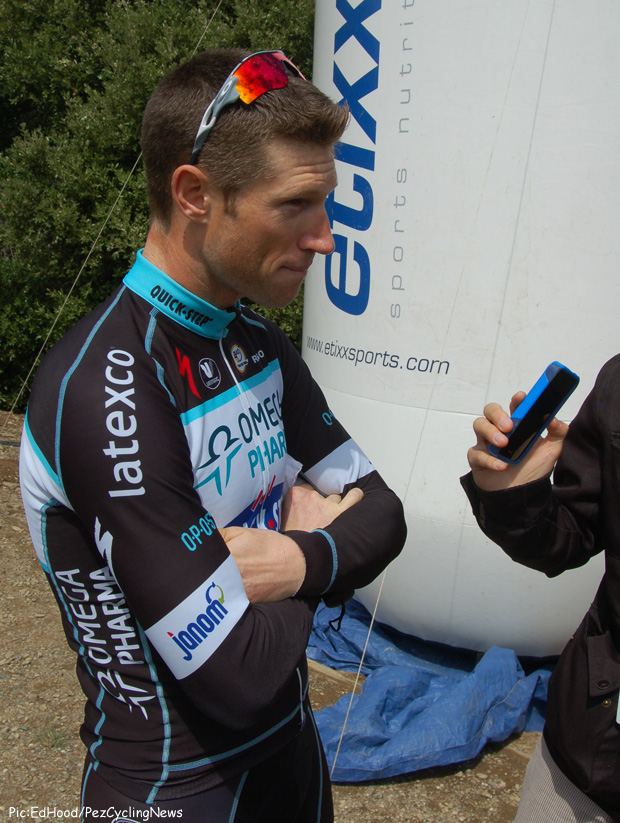 By the end of the Tour the Australian, ‘best lead out man in the business’ will have completed 74 race days so it’s unlikely we’ll see him at the Vuelta.

We opened by asking about the brutal first week of this year’s race;

“I don’t know if it was the toughest first week of a Grand Tour ever, as some folks were saying but it was very tough. And I don’t mean the parcours – the nervousness, the speed and because there’s so much money involved, the importance to the GC riders of not losing time.”

And what about all those crashes?

“I wouldn’t say that it was “normal” to have so many crashes but it’s the Tour and there are always crashes in the early stages.”

On the subject of ‘re-focussing’ after Cav’s departure he’s happy with how the race has gone.

“Yeah, we bounced back pretty good, we’ve had two stage wins, I’ve had several places of honour and we’ve ridden well in just about every stage. It’s such a pity we lost Mark though, the stage into Nimes yesterday would have really suited him.”

We put it to him that Kittel seems to have lost some of his sparkle after the first week?

“He’ll be fatigued, like everyone else but he has such a big body size that he has to burn so much more energy to get over the climbs. And there are the crashes, he’s had a couple and you can never underestimate the effect that has upon you.”

We put it to him that the toughness of the race has played into the hands of strongman, Alex Kristoff?

“He’s made a big step up in his performances this year but he’s been a good rider on the scene for a long time; very strong. And of course some of the other fast guys have been affected by crashes . . .”

And the Mark Renshaw “to do” list for the rest of le Tour?

“We have two more chances; stage 19 and then the final stage into Paris – it’d be a dream to win that one.” 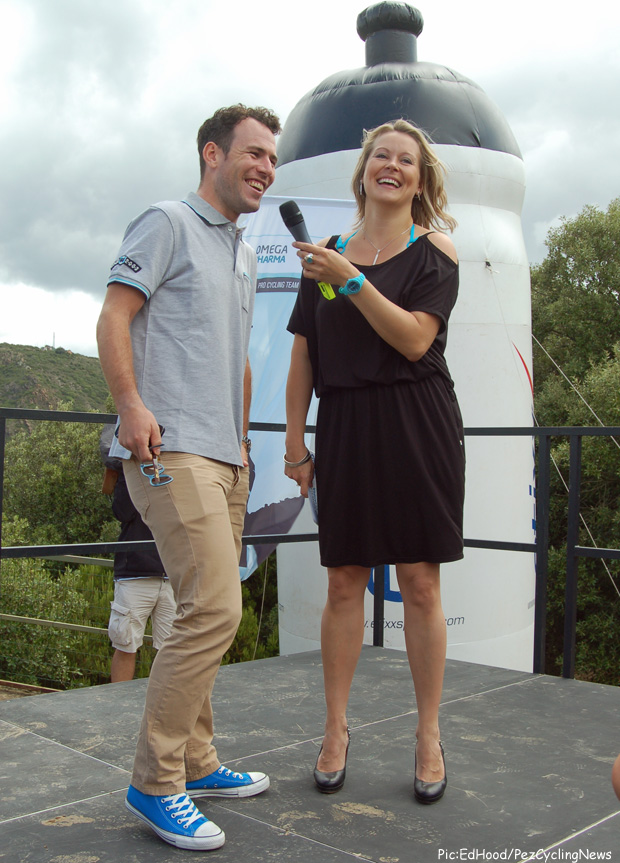 . . . it was “Cav Time” with the former world champion looking slim and fit, if a little stiff around the shoulders.

If you ever doubted Cav’s star quality you should attend one of his press conferences – it’s a feeding frenzy with the little McLaren driving sprinter as main course. 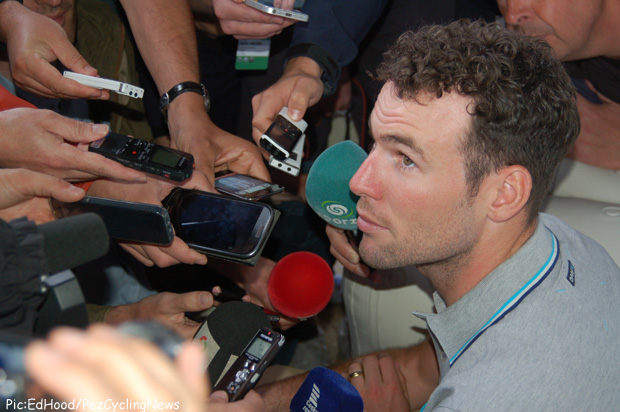 The questions are banal and the same as yesterday but he jumps through those hoops like the good pro he is. 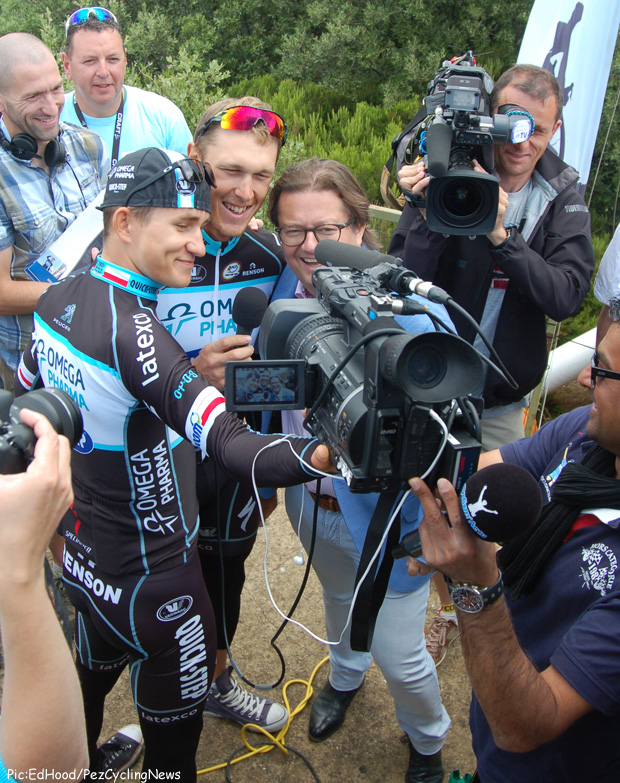 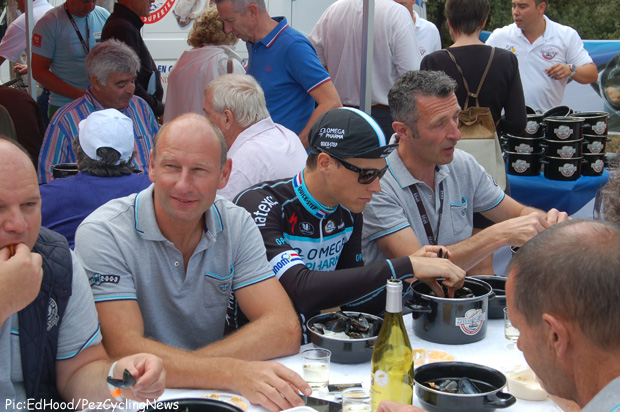 And Niki Terpstra shows us he knows his way around a pot of mussels as well as he does a six day track or cobble sector. 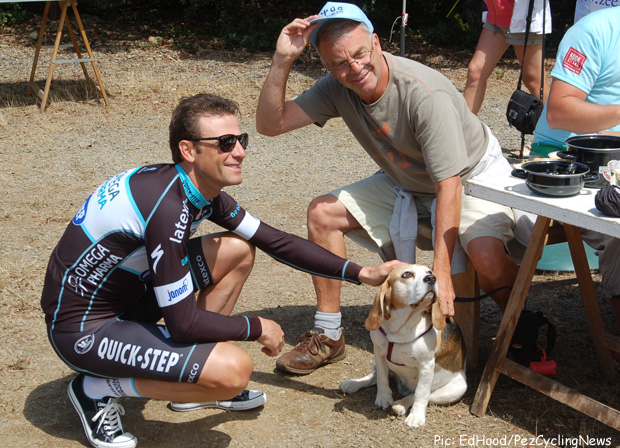 The big man finally smiles; but it’s a beagle Ale’s bonded with – not a journo. 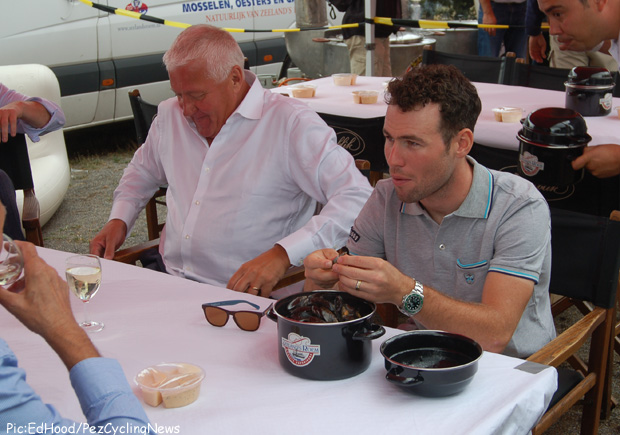 And Cav too explores the recuperative qualities of mussels. 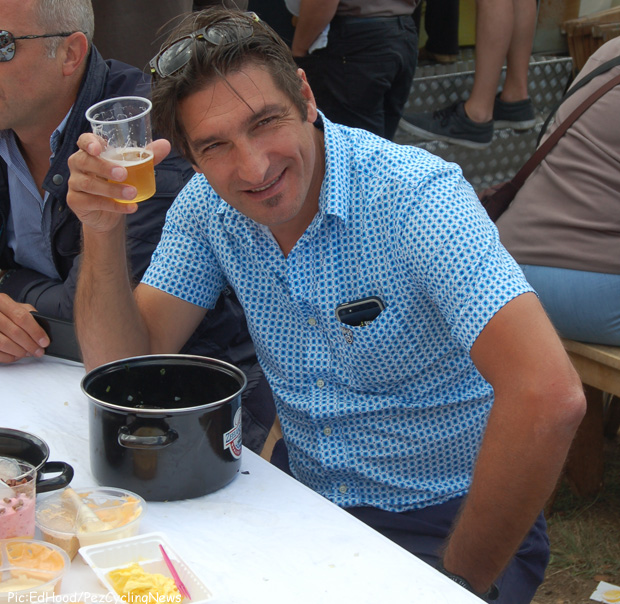 All that remains is a toast with DS Davide Bramatti and it’s time to head off to collect our creds – but that’s another story . . .

Rui Costa Will Not Start Stage 16