By Edmond Hood On Jul 22, 2013
Share
Like PEZ? Why not subscribe to our weekly newsletter to receive updates and reminders on what's cool in road cycling?

Roadside Report St.21: The Champs Elysees came alive yesterday evening with the arrival of the 100th Tour de France on its famous cobbles and our own Ed Hood was right there amongst the fans, riders and the teams soaking up the atmosphere on this special night.

That was one long drive last night for Martin, 4.5 hours on the ‘Autoroute du Soleil,’ and boy, was that room stifling? 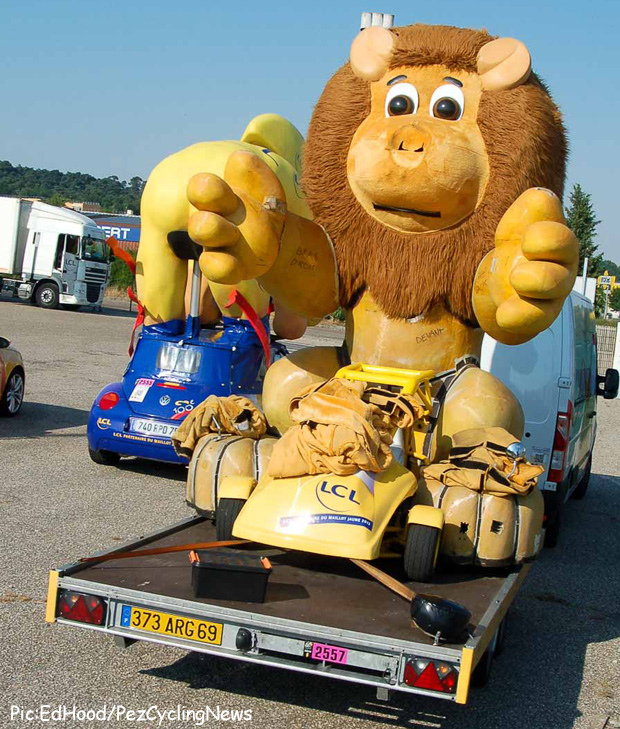 And in the car park next to us, when we woke up was the Credit Lyonais Leon – without his clothes on – but as a photo journalist we have a responsibility to show you the Tour in the raw. But we got the wi-fi to work, eventually, and now we’re back in the Opel, the tunes on Radio Nostalgi are cool – The Supremes, ‘Where Did Our Love Go?’ – 35 degrees and Paris calls. We can’t complain.

The start is at the royal town of Versailles and the grounds of Louis XIV’s glorious chateau are on the parcours. 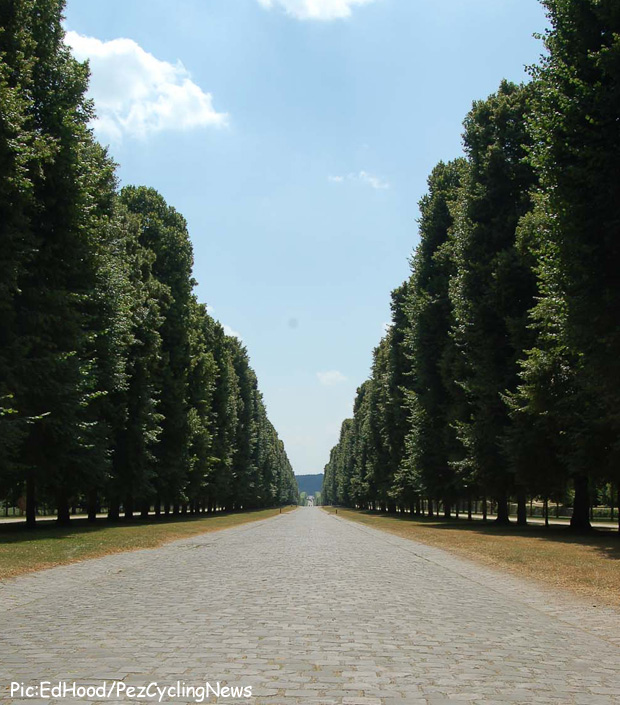 A UNESCO World Heritage Site, 50 years in the building, 700 rooms, 67 staircases, 352 fireplaces, tree lined drives which go on forever, ornamental lawns, a vast man-made lake in the shape of a cross (the Grand Canal) – the Vuelta and Giro organisers ain’t gonna like this one bit!

‘Mais, le Tour est le Tour!’ and the grand gesture is part and parcel of the biggest bicycle race on earth.

But then the parcours goes kinda uninspired on us – dual carriageways, industrial estates, roundabouts, traffic lights and the roads aren’t 100% locked down, yet. Back to the green stuff for a little – and that breeze is nice . . . 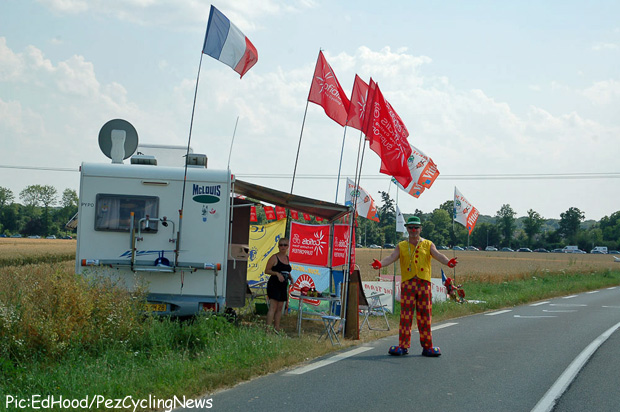 The flags flutter out in the wheat fields and we take our last snap of the clown and edge closer to that river of traffic which circles Paris, endlessly – the Boulevard Peripherique, the Paris ring road and officially one of the busiest roads in Europe. It’s to be avoided if you’re of a nervous disposition.

The Edwin Hawkins singers come in on Nostalgi right on cue as we hit the ‘burbs, ‘Oh Happy Day!’ Amen!

We need a beer and decide to park up; the moto gendarme is on us like a shot, the finger wags; ‘don’t park there!’ A snack bar appears; two tins of Heineken and a cafe creme, €6:60 – our kinda place.

The Seine, all the great cities have their river, Paris grew around the island where Notre Dame Cathedral now stands, La Ile de la Cite and there’s little time to beat a stroll along the river, taking in the book stalls opposite the cathedral. 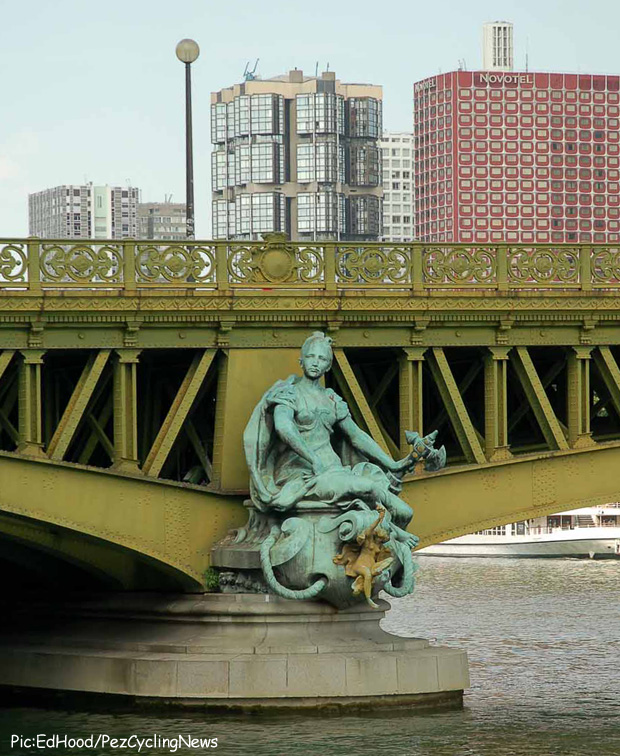 As far as architecture goes, Paris isn’t really into understatement – even the bridges across the Seine are adorned with ornate sculpture. And of course there’s the Eiffel Tower – the one construction which more than any other symbolises Paris. The tower was built as a temporary structure for the 1889 Exposition and at 300 metres was the highest structure in the world. 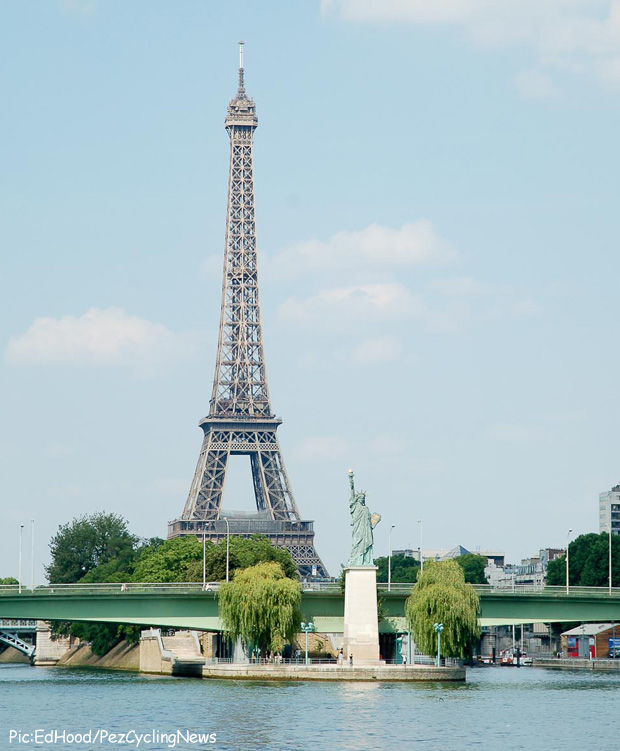 In the shadow of the tour sits the down scaled Statue of Liberty replica, given to Paris by the city of New York – it was Georges Eiffel who designed Liberty as well as his famous tower. The run in to Paris is different, this year – usually it runs straight along the Seine, hangs left at the Louvre through the famous underpass to emerge at the golden Joan of Arc statue before turning left along the Rue de Rivoli and the red kite.

But this year we crossed the Seine and then crossed back again to rocket in past the end of the underpass before describing the traditional circuit. The net result of this was traffic chaos with Tour vehicles mixed in with civilians and a lot of tempers fraying – but not ours, we knew we’d get there in the end and grabbed the photo ops.

Les Invalides with that famous golden dome was originally built as a home for soldiers invalided out of the army but now houses Napoleon’s tomb. Despite the fact that Monsieur Bonaparte caused a lot of hassles to a lot of folks as he rampaged around Europe, he’s still a huge hero in France. But those were the Colonial days; and that’s all stopped – right? 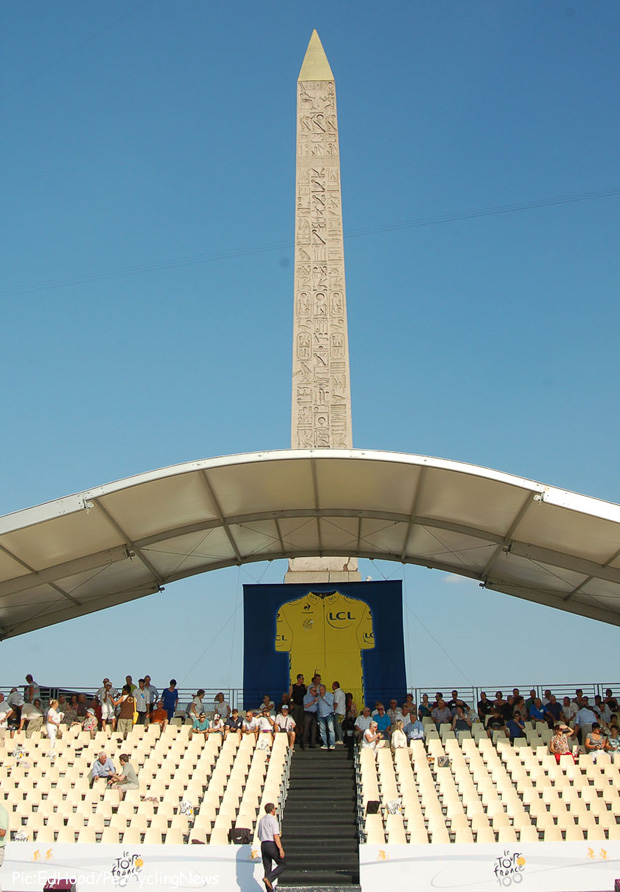 On the Place de la Concorde is the Obelisk gifted to the France by Egypt, it sits behind an empty tribune. The word is that the stage looked spectacular on TV but perhaps it was just a little late for the good people of Paris and their families on a Sunday night? 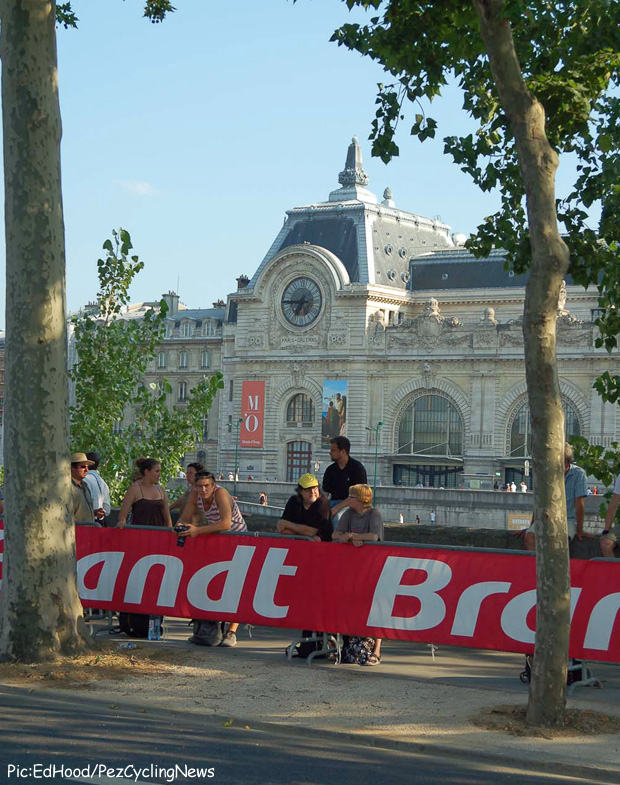 Across the Seine from a Quai where it was easy to get a ‘hang spot’ on the barriers – unlike any other year I’ve ever seen le Tour – is the Musee d’Orsay, once a railway station and now the home of one of the world’s most stunning collections of art. 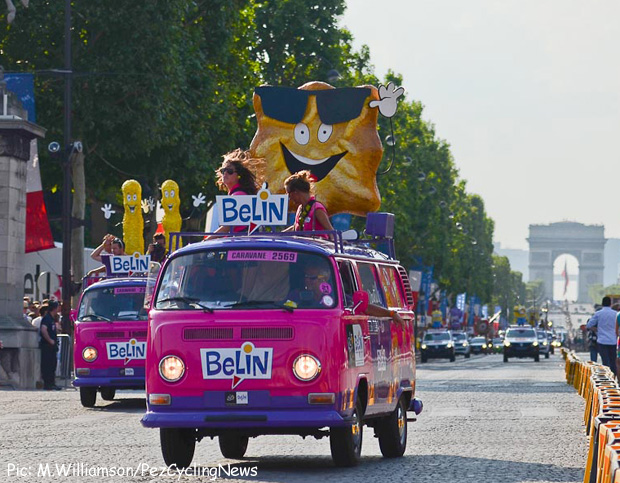 We watched the caravan roll down the Champs Elysees – is it sacrilege to have a biscuit van in the same shot as L’Arc de Triomphe? L’Arc was started by Napoleon to commemorate the triumphs of his armies – and himself, of course.

The Louvre is another of the world’s great galleries – when confronted with how to extend the gallery space the architect came up with a novel solution. 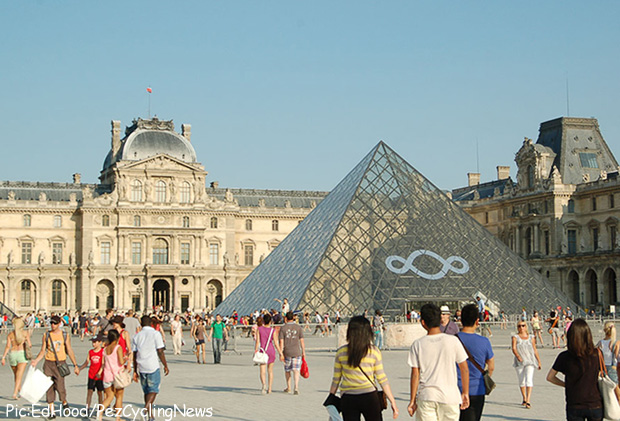 The new galleries are all underground with just the famous glass pyramid to give a clue as to where the rest of the treasures are located. 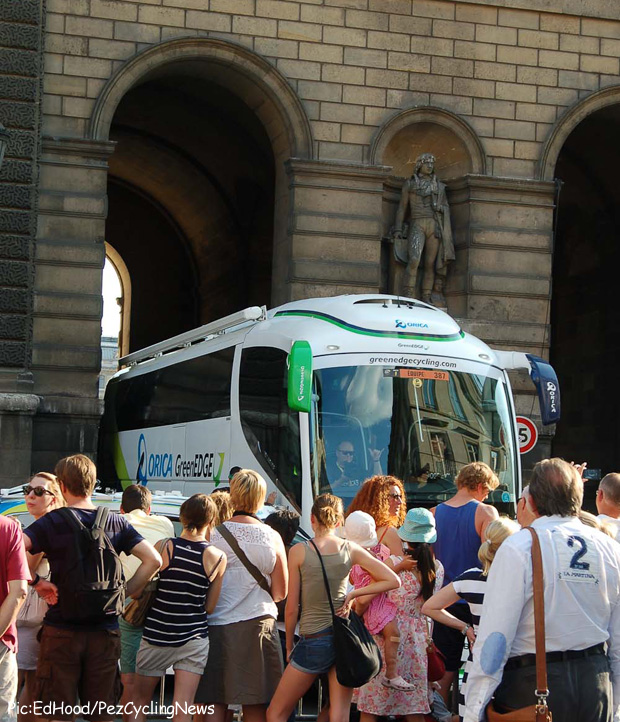 Oh! Oh! – that GreenEdge bus is in action again – but this isn’t a stage finish gantry, it’s the Louvre. Get that wrong and it’s the Bastille, mon ami! But fortunately he got through, to loud applause. Whilst Martin headed off to take the action shots, I sniffaround the team buses. 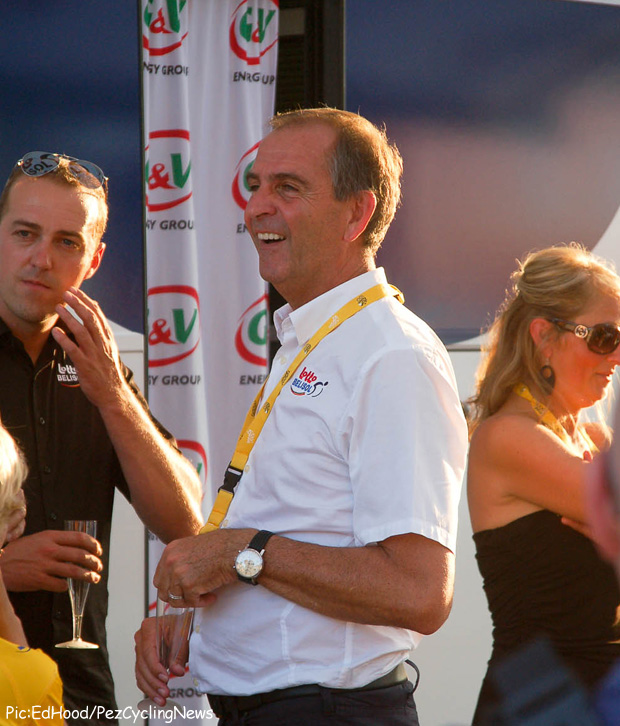 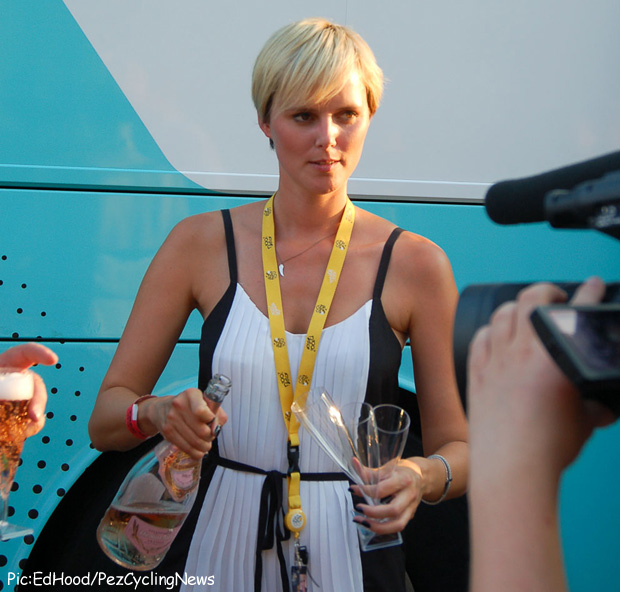 Number one ‘party bus’ is Lotto; Marc Sergeant laughs whilst a Goddess dispenses champers and no one seems that upset when Argos’s big Kittel gets the better of Lotto man Greipel. Champagne has that effect. 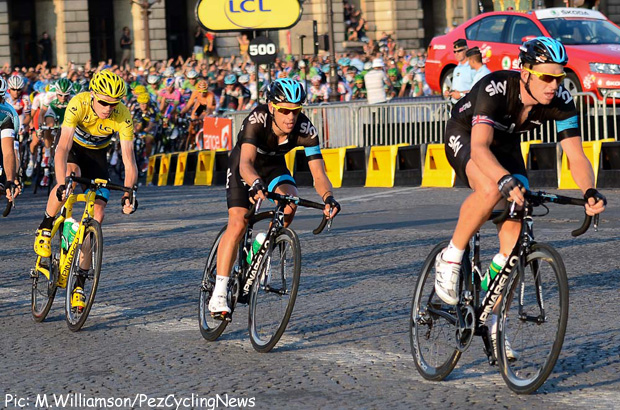 The man of the day however isn’t drinking champers – just yet – Christopher Froome (Sky & GB via Nairobi and Monaco) is out on the Place de la Concorde and let’s not forget his boys – respect to Ian Stannard, Geraint Thomas, Peter Kennaugh, Richie Porte and Kanstantsin Siutsou. 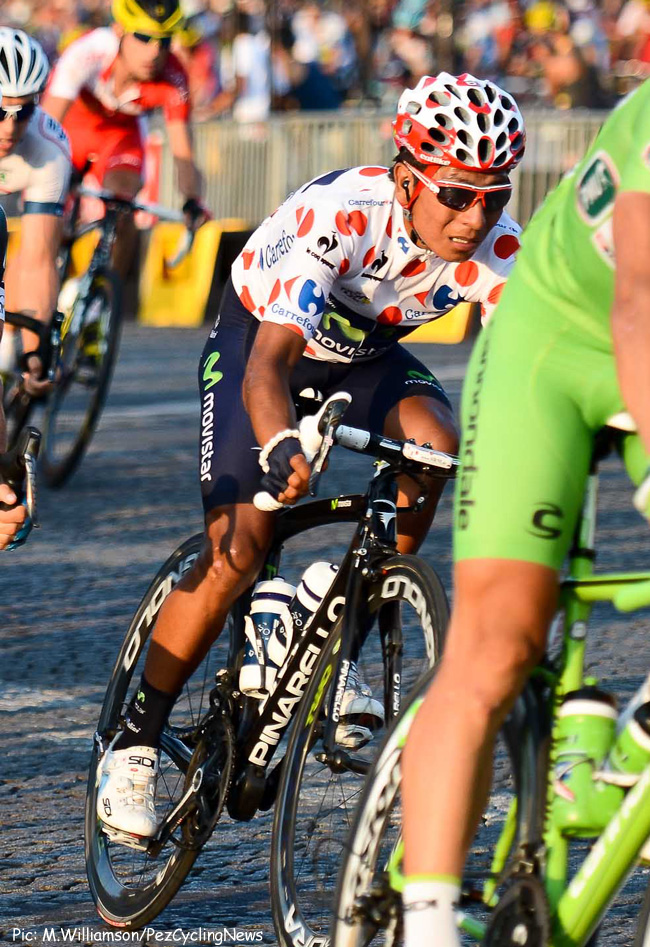 The new sensation – not mentioned by yours truly in his Tour preview – is Nairo Quintana (Movistar & Colombia) stage winner, second on GC, King of the Mountains and Best Young Rider. Will his success provoke a flood of deranged Colombian radio and TV reporters on the 2014 Tour? Let’s hope so. 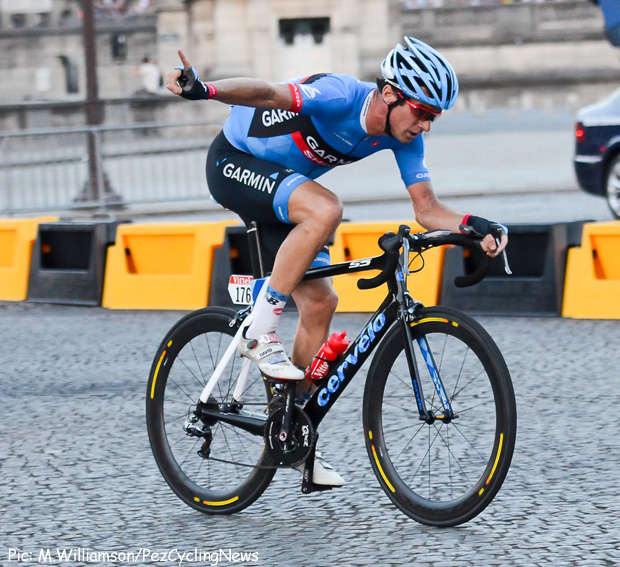 David Millar (Garmin & Scotland) put on a show for us on the Champs – initially with Juan Antonio Flecha (Vacansoleil & Spain) and then solo. Some cryptic Tweets from Mr. Millar lead us to believe that it may have been his grand farewell to le Tour? 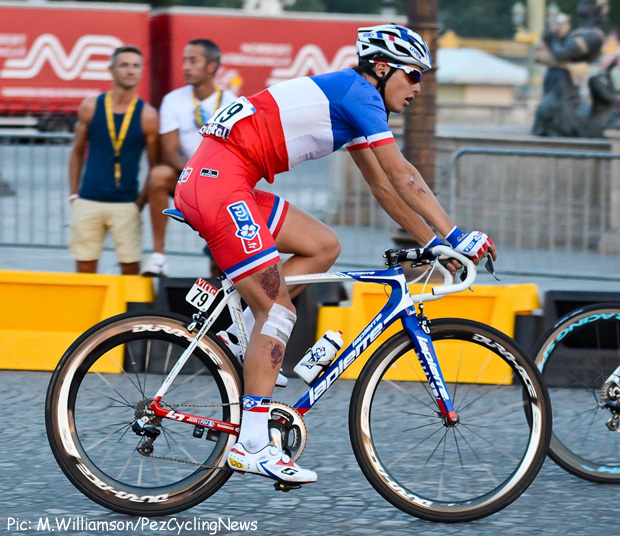 Not such a spectacular day for French champion Arthur Vichot though (F des J) two wheel changes made it hard for him to honour his jersey – I’m just glad I’m not his mechanic. 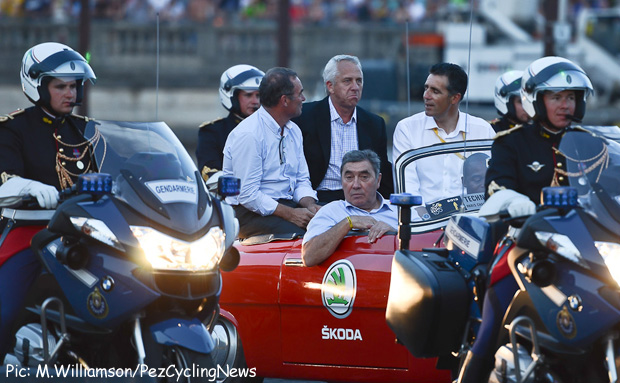 And it was nice to see Greats Indurain, Hinault, Lemond and Merckx given a lap of honour in a lovely old Peugeot convertible after the finish. Greg even cuddled Bernard at one stage – that’s not how I remember it, Greg . . .

David Brailsford tried hard not to look smug as he gave his post race thoughts – but failed miserably. 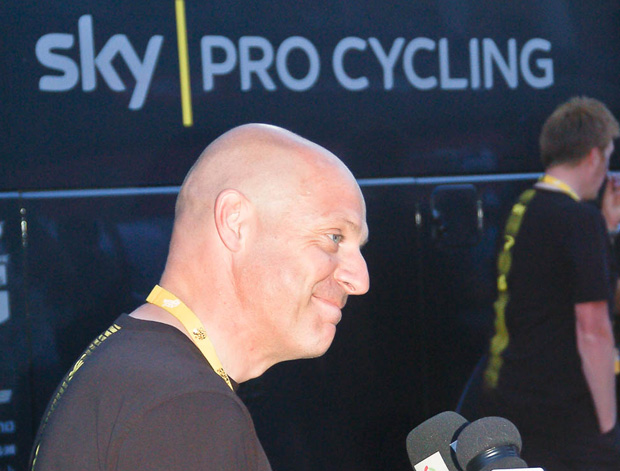 But who wouldn’t be smug about two Tour wins in two years with two different riders – and a great prospect in Richie Porte waiting in the wings. 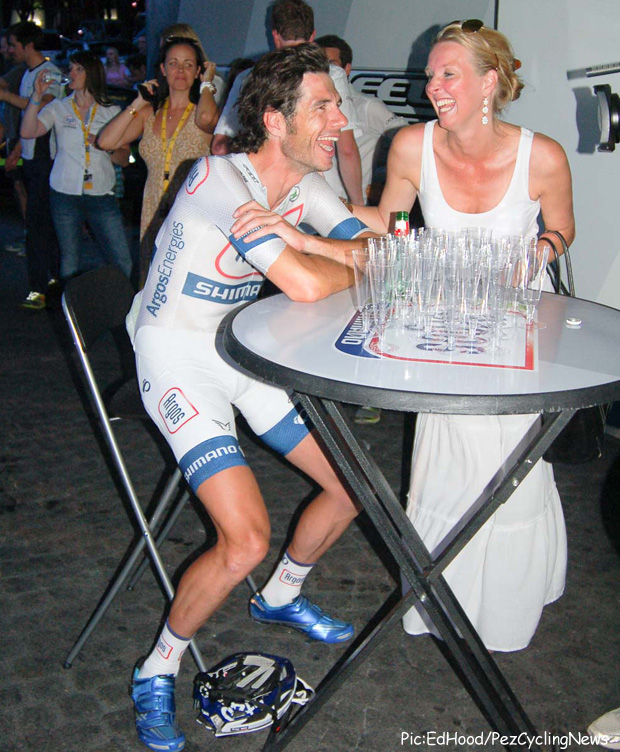 Over at Argos there was joy unbounded as they celebrated big German Marcel Kittel’s fourth stage win – a great result for the Dutch oil company’s team. But eventually the crowd begins to melt into the night – and how do you know that it’s party time? 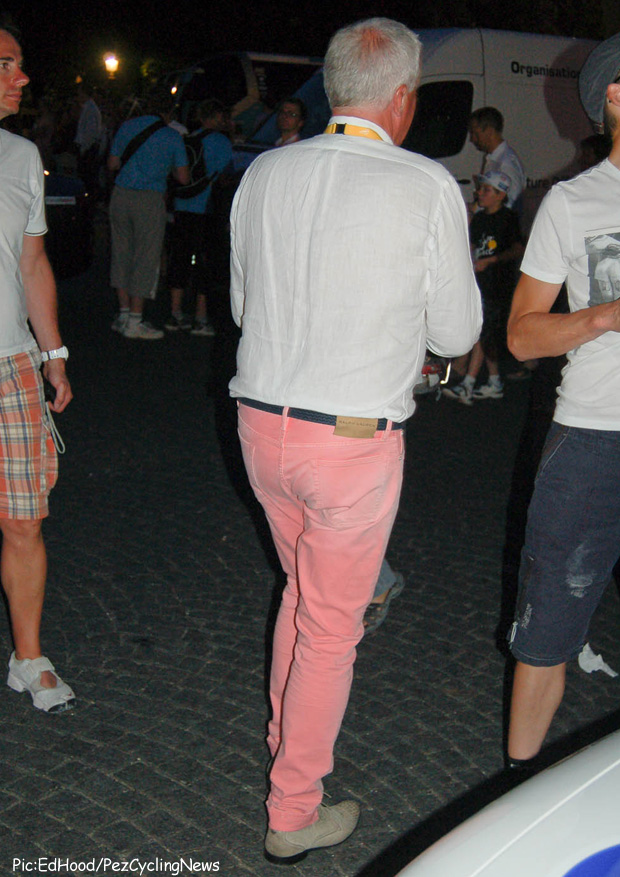 When QuickStep head honcho Patrick Lefevre pulls on his pink pants, dude! As they say on the North American Continent; ‘it’s been a blast,’

Thanks to Richard Pestes for putting his faith in me once again; to Chris Selden for all his behind the scenes hard work in posting our work; to long suffering Marlene for watching me walk out the door with my hold all, again; to my colleague Martin for all the driving, photography, computer wizardry and putting up with me – but most of all to all of our loyal PEZ readers, without you, there’s no point.

For more fun keep it tuned to PEZ and look out for more photos, news and commentary on the PezCyclingNews Twitter and Facebook Page.

Tour Lowdown: And That’s A Wrap!