Roadside St.21: Ed Hood’s 2014 Tour de France adventure comes to an end and as he makes his way into the centre of Paris, Ed gives us his thoughts on the riders and everything Tour. As always on the last stage there is time to take in all the sights and reflect on another Tour down.

Evry, Sunday morning and it’s all over bar the potter to the Peripherique and the warp speed on the Champs Elysees. It’s the first time a Frenchman has clambered onto the podium since 1997 – Trick Dicky Virenque – and the first time since 1984 we’ve had two Frenchmen on the podium – Bernard Hinault and the late Laurent Fignon. 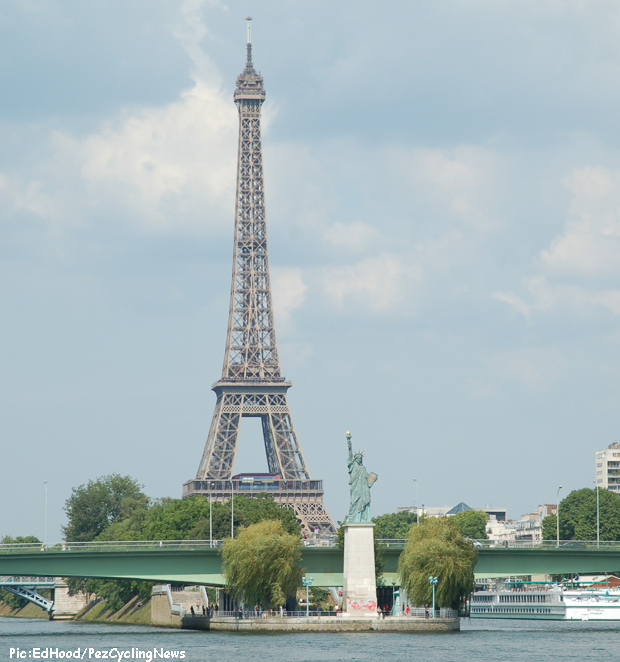 10 out of 10 to AG2R’s Jean-Christophe Peraud – who proves that Grand Tour riding is as much about strength and courage as it is about speed and youth. And 9.5 to F des J’s Thibaut Pinot who rode with panache and confirmed that his stage win and top 10 in 2012 were no fluke.

Italy’s Vincenzo Nibali has looked a winner since he slipped an elite group into Sheffield to win way back on Stage Two. Apart from briefly ‘lending’ that coveted maillot jaune to Lotto’s Frenchman, Tony Gallopin the baby blue of Astana has been the colour of this Tour. Nibali was strong but cycling is the ultimate team sport and in riders like Tangert, Scarponi, Fuglsang and Westra he could have wished for no more dedicated and selfless foot soldiers.

A memorable Tour – for most of the right reasons; just such a pity to see Alberto Contador and Chris Froome crash out. Le Tour 2015 should be a cracker with Nibali out to defend; Froome and Contador out to show they’re back and Peraud, Pinot and Bardet all out for glory.

But there’s one more chapter to the saga before we put the book on the shelf . . .

. . . All the teams have to put best foot forward for this day – there’ll be endless presentations at it’s end. 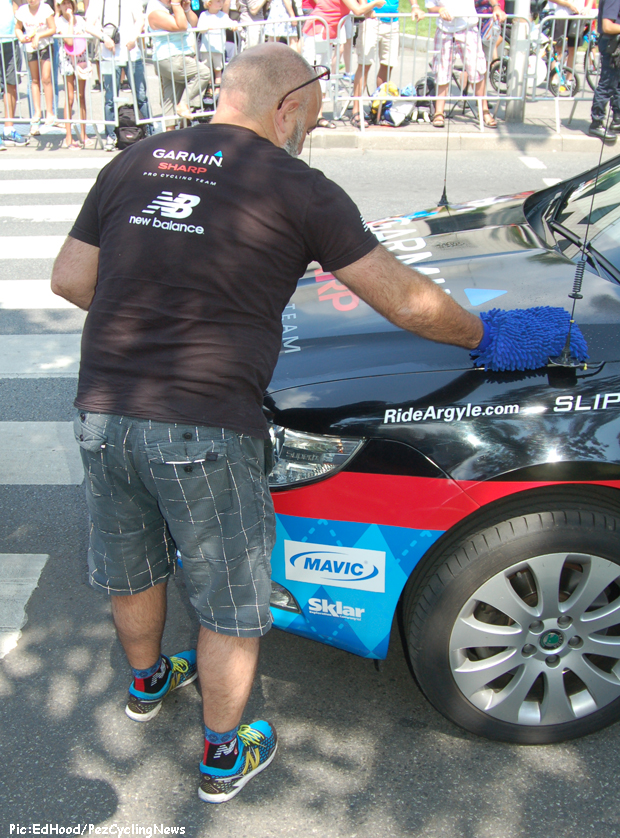 Already gleaming team cars get an extra polish – you have to look your best on Les Champs. 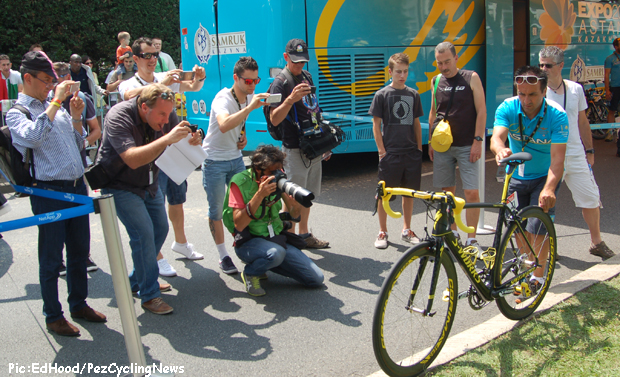 Vincenzo was still on his way to the team bus when we we’re on the hunt for pics.

But his Specialized was proving to be a good stand-in; some of the journos were close to asking it questions.

And we were pleased to see Specialized keeping the colour scheme low key – too much yellow is sickly. 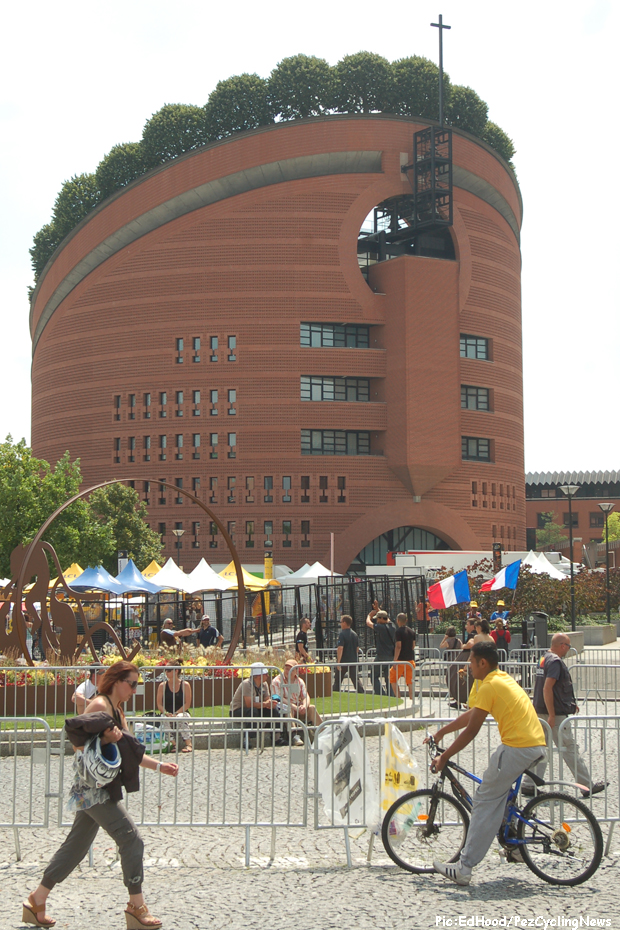 In our opinion Evry was not a good start venue – despite the striking church tower – it was too modern, spread out, soulless and lacked the vibe you need for a last stage start venue.

The parcours in to Paris were, in a word, bland – no photo opportunities at all but we guess the organiser have to get the race into town somehow. 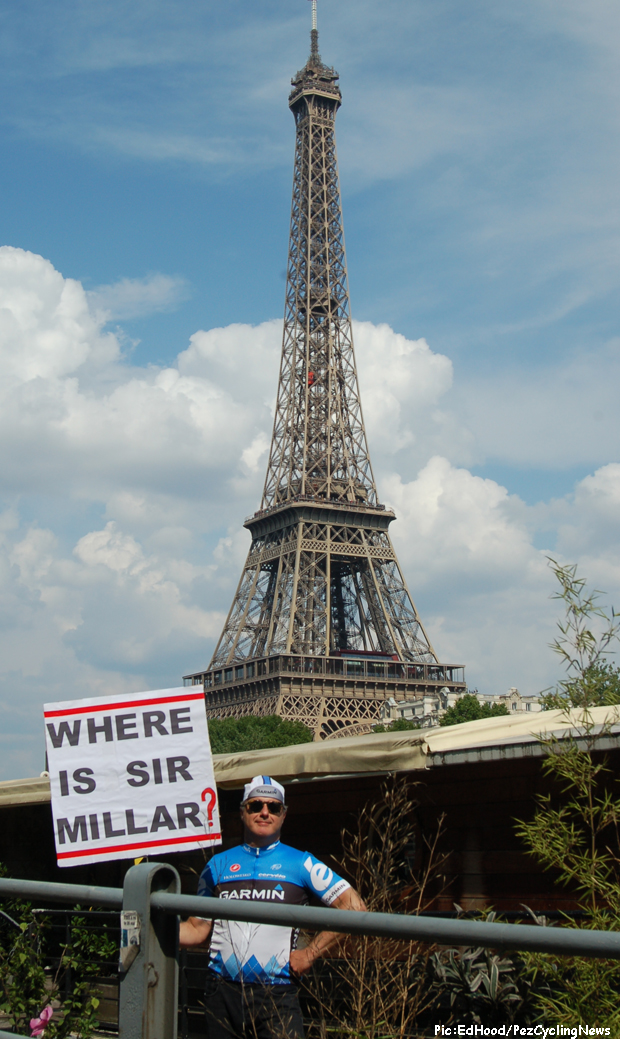 No such complaint in The City of Light and no matter how many times you experience it, that first site of the Eiffel Tower is still special. Originally built as temporary structure for an exposition it’s now as much a part of Paris as L’Arc de Triomphe or the Sacré Coeur church.

But our trip into the city was not without controversy – we stopped to chat with the gentleman with the ‘Sir David’ placard; ‘Cavendeesh is gone, Froome is gone, why is there no Wiggo – and no Sir David Millar?’ We explained that we had no say in Sky or Garmin team selection and bolted – pronto! 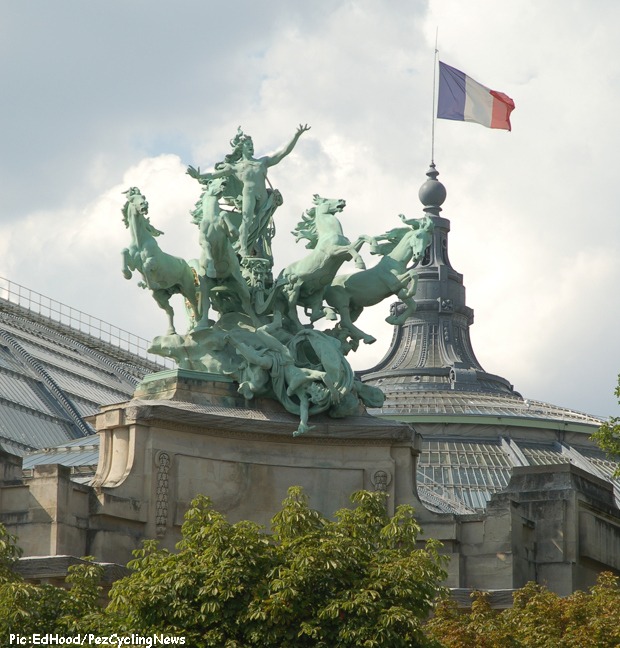 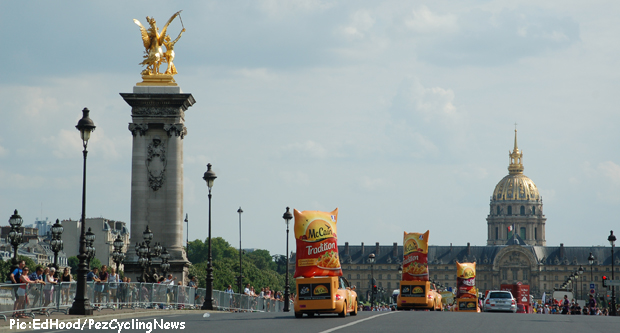 Paris is such a photogenic city; you’d have to be a really poor photographer not to find great opportunities everywhere you look.

Giant potato chips crossing the Seine with the golden dome of Les Invalides in the background for example. 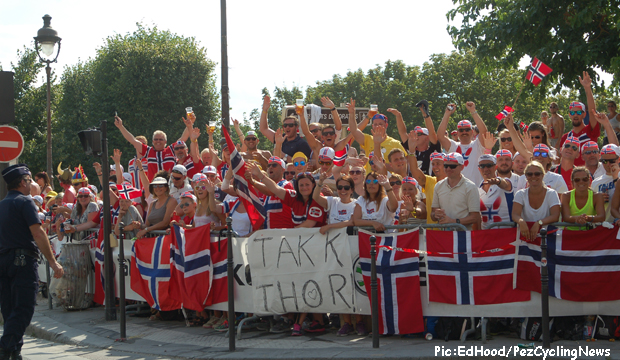 And we had to respond to the cries from ‘Norwegian corner’ on the tunnel exit for ‘PHOTO!’ and fire a quick one off out the car window. 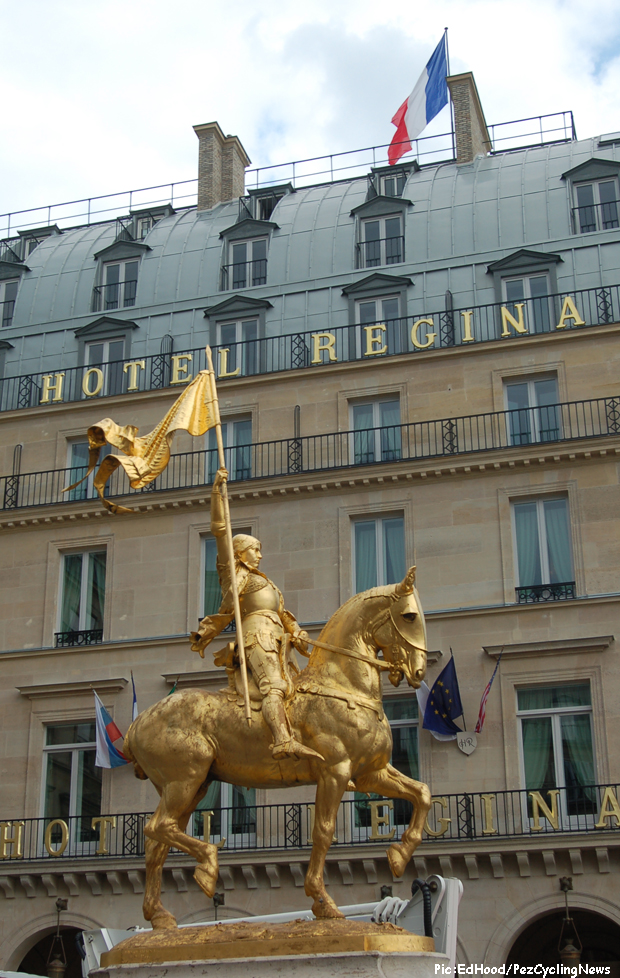 For the last two years Jean d’Arc has had to put up with the English invaders twice taking home the booty – but this year she had two French Princes performing well on the field of battle.

Perhaps next year she’ll be able to celebrate outright victory? 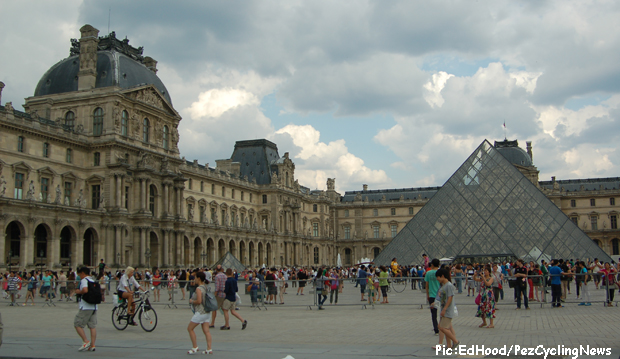 There are some things in Paris you just have to photograph – the Louvre is one.

Home to the Mona Lisa and one of the greatest galleries in the world – but no time for PEZ to visit, not with team buses to stalk. 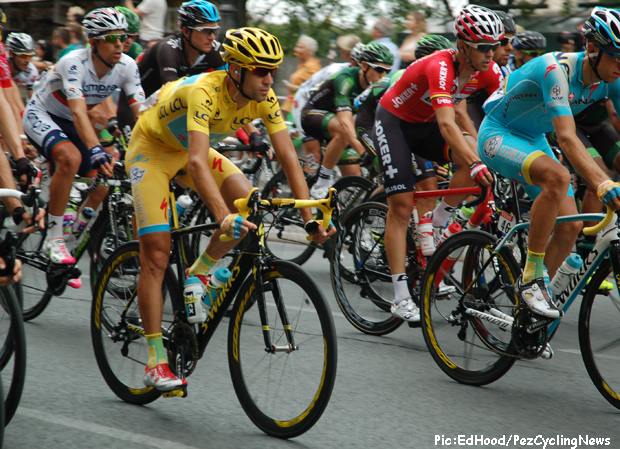 We didn’t go crazy on the race pics – there’ll be plenty of those from photogs with much better access and lenses than us.

But we must include a photo of the man who joins the Greats – Anquetil, Gimondi, Merckx, Hinault and Contador as a winner of all three Grand Tours. 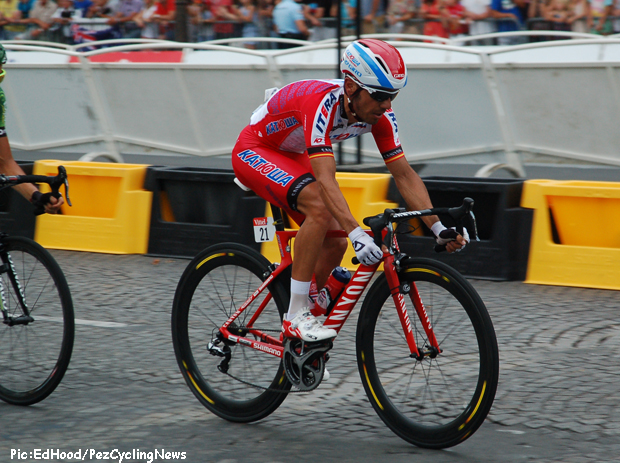 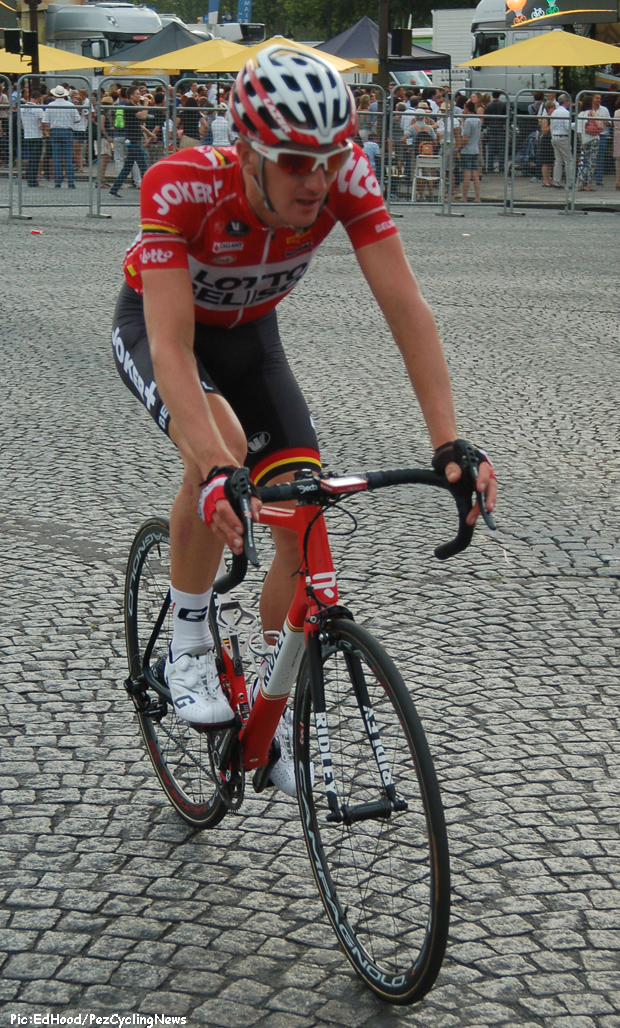 But it’s not all ‘ice cream and fairies’ on the Tour.

Whilst Lotto’s Tour was a good one, stage wins from Gallopin and Greipel and a stint in yellow for the French rider, the team’s GC rider, Jurgen Van Den Broeck had a very poor race.

Prior to the race he was warned by management that if he didn’t ride a good Dauphine then there would be no Tour ride and Greipel would get extra riders for his sprint train.

V de B delivered in the Dauphine, making the podium but there was to be no repetition of his Tour best of fourth as he slipped further and further down the standings. 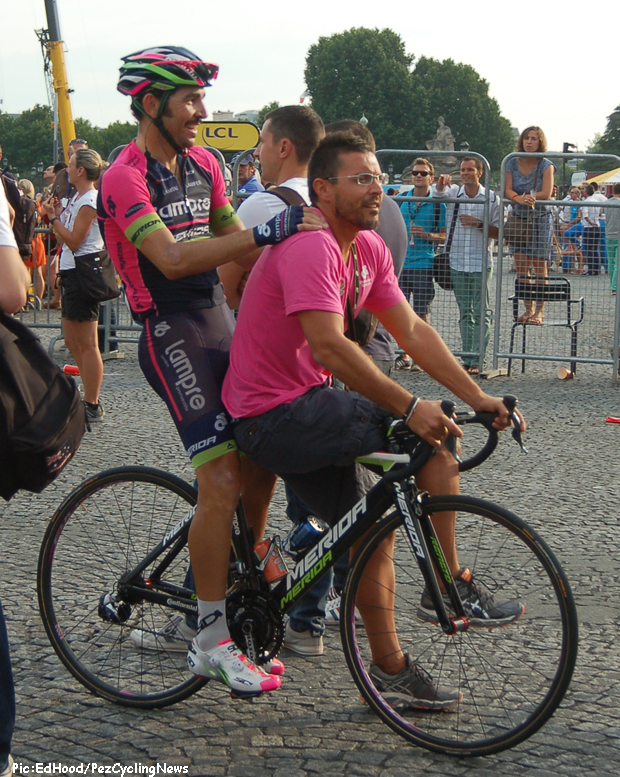 There did seem to be a trend starting at the bus park – two people on the one bike.

Lampre’s Jose Serpa sharing his bike with a mechanic and Quick-Step’s Niki Terpstra sharing with his young ‘un. 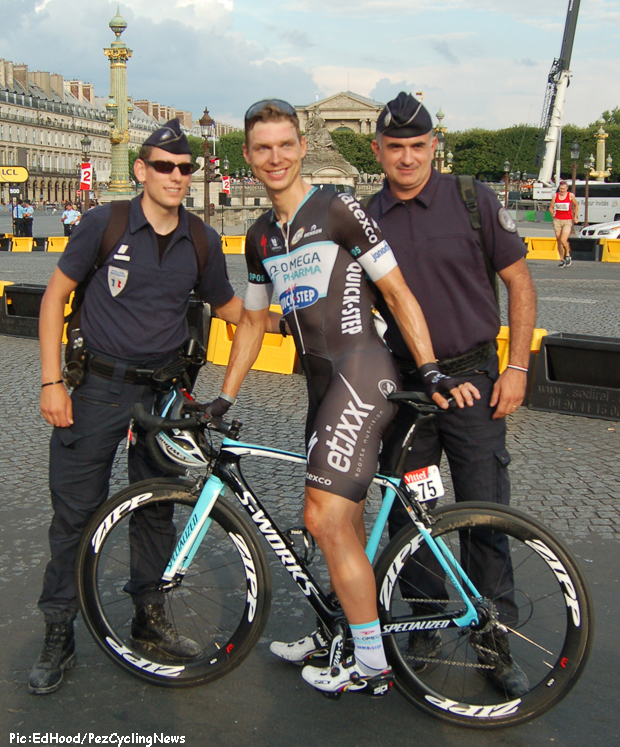 We knew all that speed was bound to get Tony in to trouble and the gendarmes nabbed him – but just for a picture. 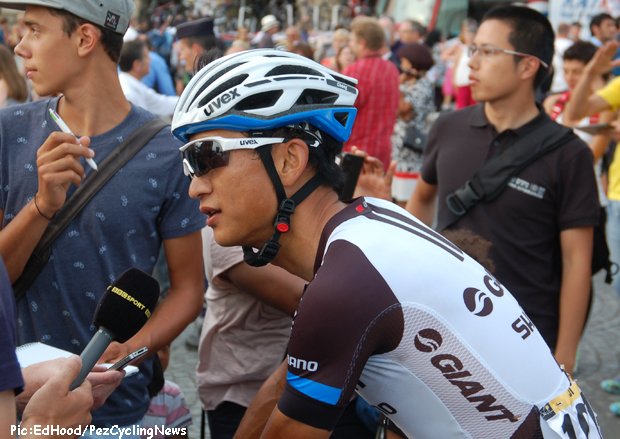 Giant’s Cheng Ji was one of the heroes of the Tour, the first Chinese rider to start and finish the race.

And not just hanging on – he worked tirelessly for his team on the sprint stages.

He was held up in the crash and lapped on the Champs Elysees but still in demand by the journos after the finish. 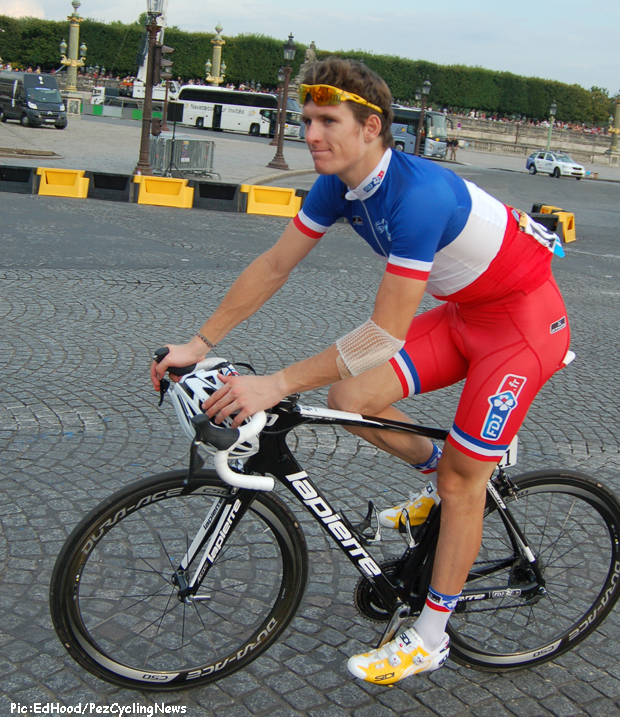 French champion Arnaud Démare will be a better rider now he has his first Tour in his legs – once he recovers from the Giro and Tour back to back, that is.

He’s still a young man and didn’t sparkle in the Tour the way he did in the Giro.

But along with Pinot, Coquard, Bouhani and Vichot very much a part of the ‘new wave’ of young Frenchmen who will all be even better in 2015. 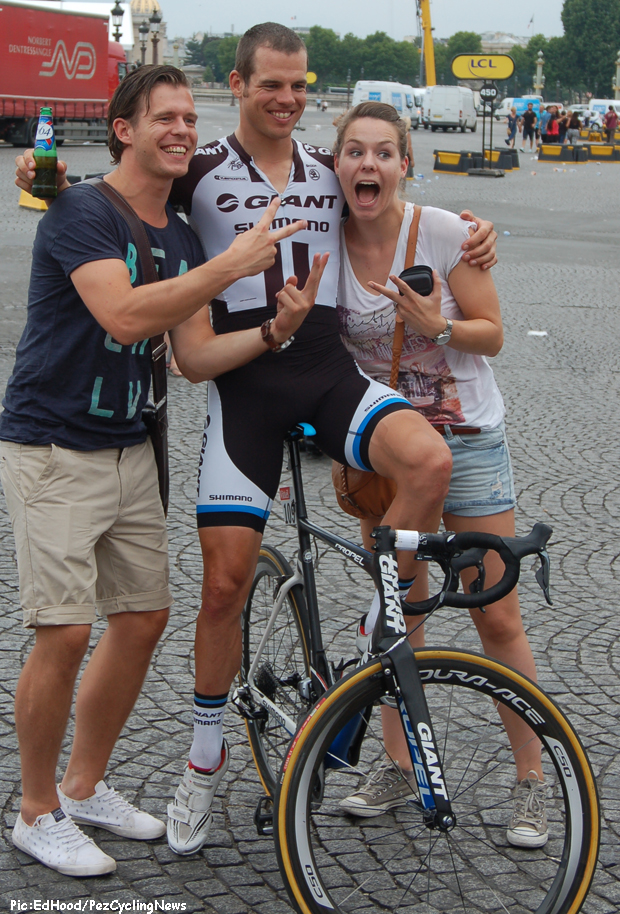 The party doesn’t take long to start after the finish and Giant’s Tom Veelers was enjoying the 1664 – his first in a month. 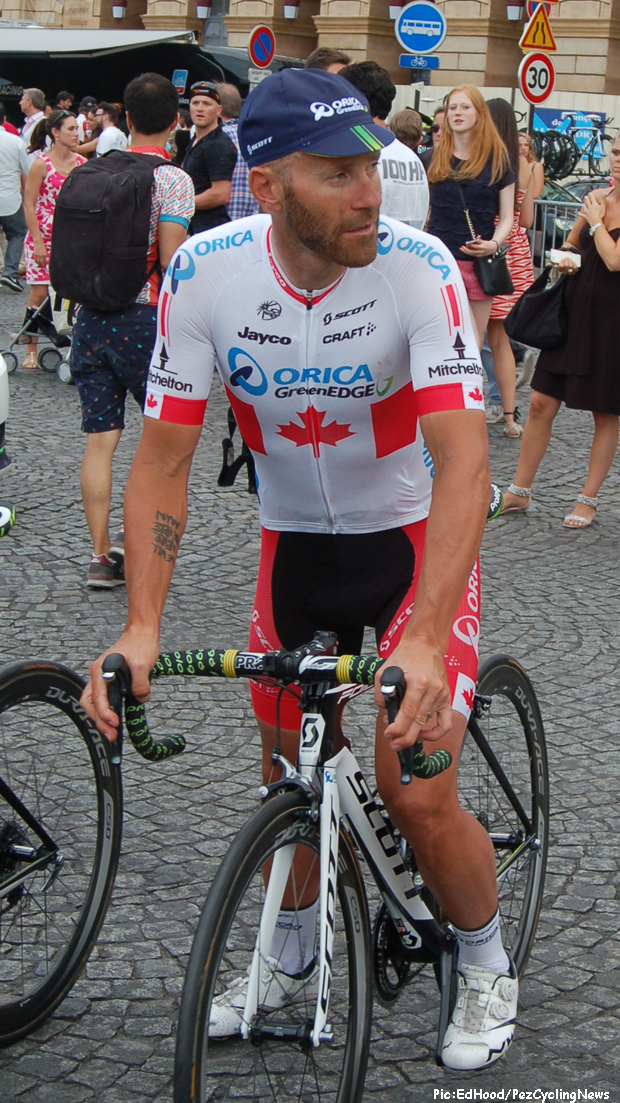 Want a tip for the Commonwealth Games road race and time trial?

Canada’s Svein Tuft came out of last year’s race totally wasted; this year he’s much, much fresher and will be one of the men to beat in Glasgow.

Both en ligne and against the watch. 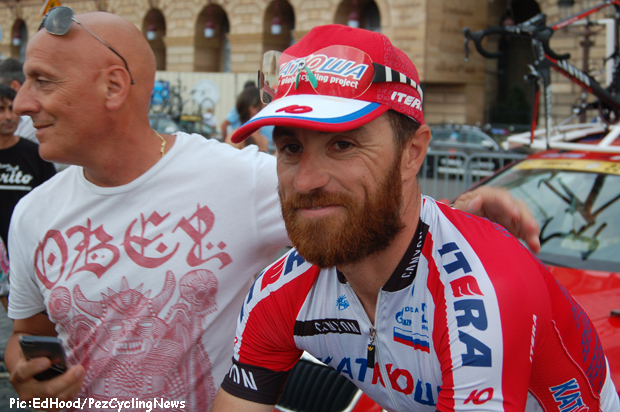 Our stance as confirmed anti-beardists clashes with our respect for Katusha’s Luca Paolini.

The Italian former World’s medallist was instrumental in team mate Kristoff’s two stage wins and will again be a player at the Worlds. 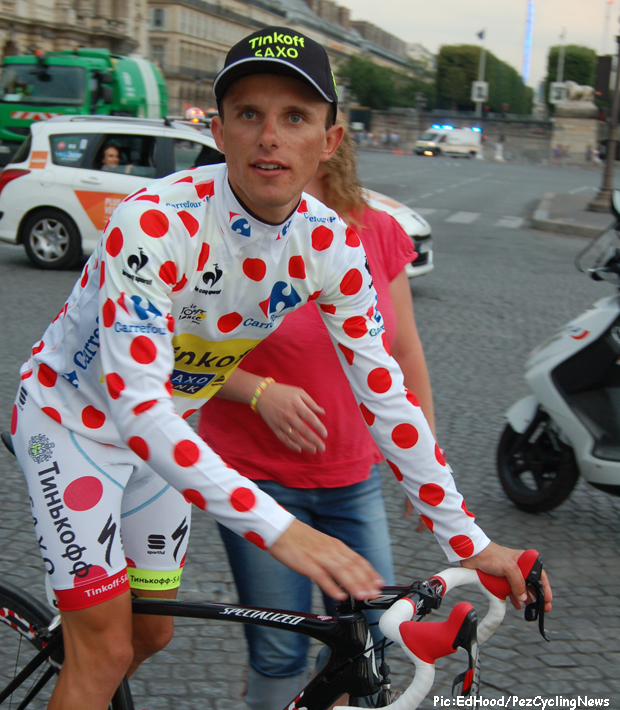 Before le Tour, Rafal Majka Tweeted that he was upset with Tinkoff management for asking him to ride the race after he’d ridden to a top ten spot in the Giro.

That Tweet disappeared as fast as it appeared and Majka was at pains to tell everyone how happy he was to be riding the race.

Especially after he took those two stage wins and the polka dot jersey.

Again, Specialized exercised restraint and we were spared too many red dots. 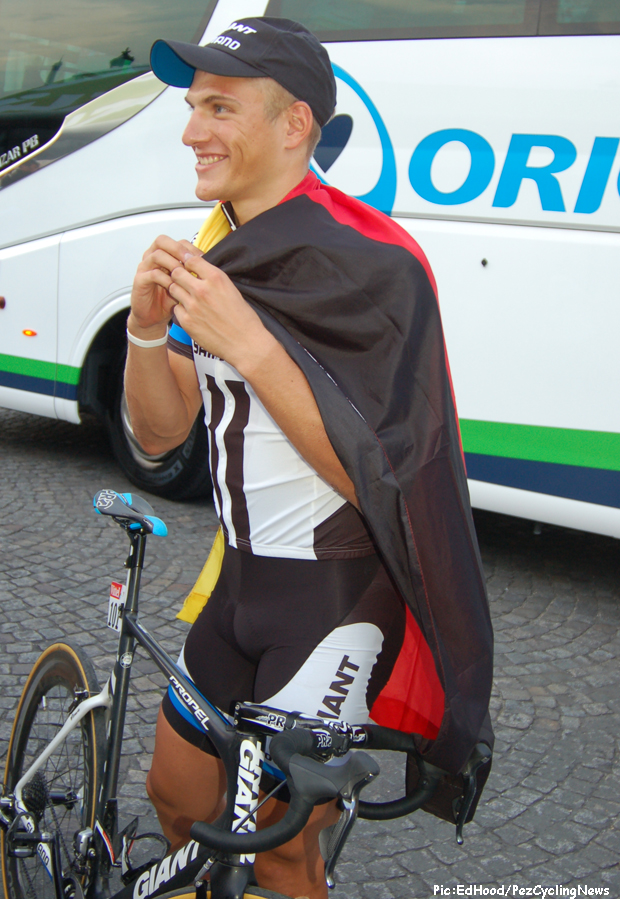 And no, he’s not taking off his Superman cape, it’s a German flag – the man who topped and tailed le tour: Big Marcel.

He took three stages out of four in the first week; seemed to go off the boil in the mid part of the race but came back like a beast to win a fourth stage and defend his ‘sprinters’ world title’ on the Champs Elysees.

Generally we worry about too much jewellery and too much time spent in front of the mirror.

But Super Mario got away with it and so does Marcel. 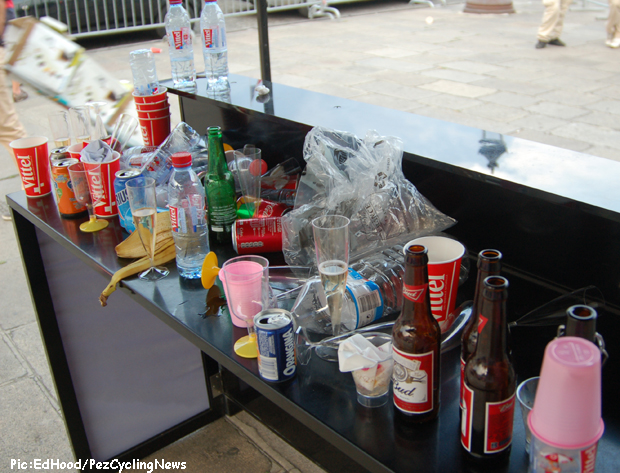 As the last laps of honour were ridden we decided we’d better find a bed and something to eat.

As I think they say on the far side of the Atlantic; ‘it’s been a blast!’

And as Dave always says at this moment: ‘well, our creds are of no use to us now!’

See you at la Vuelta?

Belkin Tour Challenge for kids was an amazing adventure