PEZ Roadside Stage 4: There’s nothing more off-putting than being blasй about something. When you luck out you should thank The Chief upstairs or who ever you happen to believe in. For my part, I can only try and explain what a fantastic day I had slipstreaming a top pro for 29.5kms of TT excitement!

Yesterday was a bit of a challenge due to a WiFi problem that had the Orange technical support guys scratching their heads. Thanks to David for sorting me out as the press room emptied and I ended up as one of a rag-tag half-dozen rattling around the empty benches. 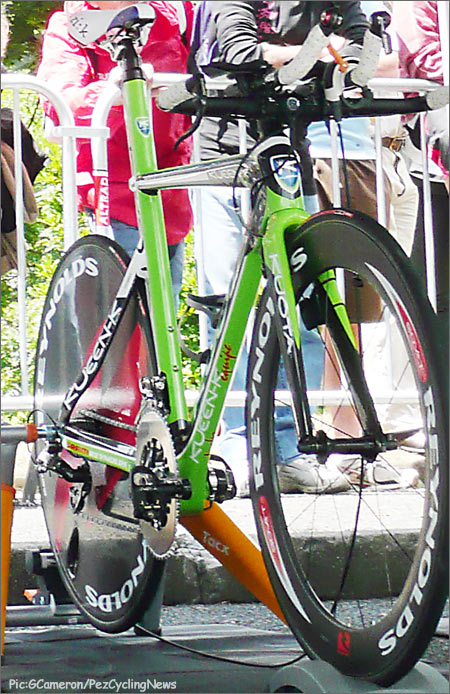 Today, things dawned much better, with a sunny sky and a sunnier disposition. And the major reason? SRAM’s press man Michael Zellmann, hooked me up with a ride following Agritubel’s Eduardo Gonzalo Ramirez. 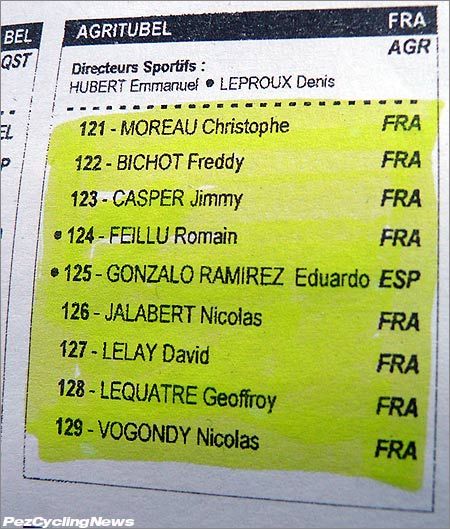 TT day at a Grand Tour is the fans’ big photo op. Every rider flying past, with the schedules available in newspapers and online – it’s the dream chance for snapping their favorite. You pick a spot, figure who you want to see, estimate when they’re coming ….. and fire.

As usual up here, most of the flash bulbs pop when the big heroes go by – the regional guys, the names like Christophe Moreau and Thomas Voeckler, and now Romain Feillu. 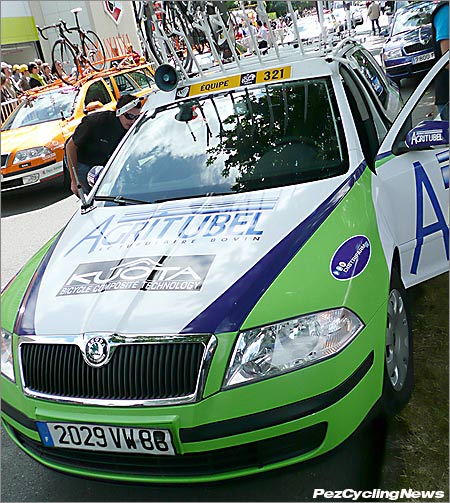 Cholet is a major economic/industrial hub in the Loire region, but it’s unlikely the riders got any chance to appreciate the town’s efforts to ‘green up’. They’ve planted over 25,000 trees in the heart of the city!

To be honest, I didn’t take any notice either, as I spent most of the time beaming like an idiot, taking pictures and trying to take it all in. 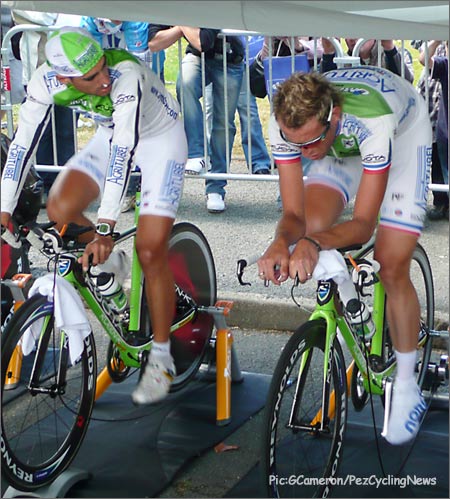 I hooked up with Michael Zellmann at the Agritubel bus at 1pm after a flurry of SMSs, and found out he’d given up his ride in the car to let me have a go. Once everything was OKed by Dominic, I met the DS Denis Lepreux. We made a little small talk about yesterday – “Feillu – ces’t superb!!” 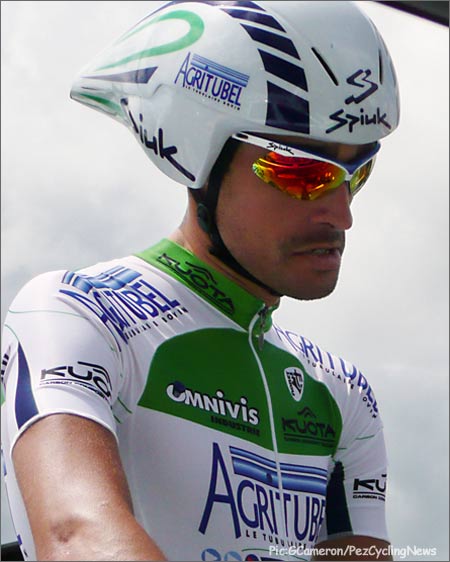 We rolled down to the start ramp, and Denis gave some last minute encouragement to Eduardo as he waited by the barriers. I asked Denis what he reckoned of Eduardo’s chances? His expression suggested Eduardo knew this wasn’t his day. I felt as nervous as Eduardo probably did by this point. 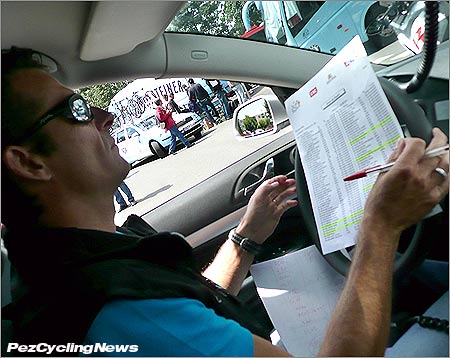 Denis quickly checks his radio, mobile, resets his stopwatch. So many things to consider – it’s a fine art for these guys to watch the variables, and drive fast at the same time! 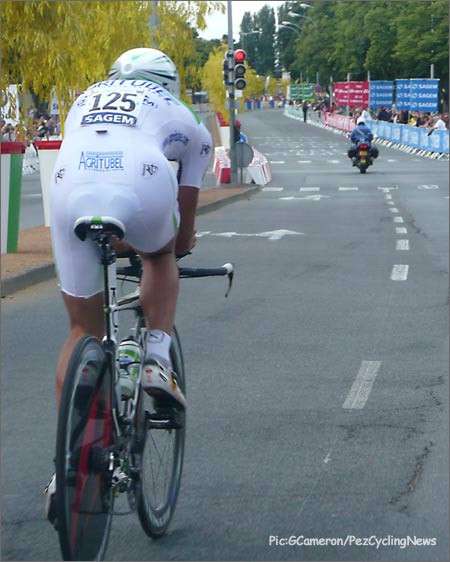 Beep ………… beep, beep, beep, beep, BEEP! We’re off. I’m strapped into the passenger seat (!) and holding on! To paraphrase Bob Roll in his autobiography, it never ceases to amaze just how fast these guys can ride their bikes. Genetics, dedication, training – it all adds up to an impressive package.

And Eduardo isn’t even a time trial specialist. This is just about surviving the day within the time cut, so that he can do his job for Feillu, Moreau, Vogondy and the rest further on down the road. And if the chance comes along ….. he needs his energy to take it. 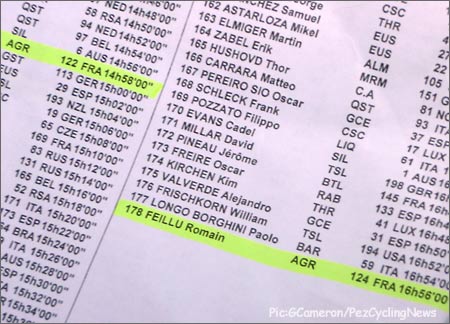 He starts smoothly on his Kuota TT rig and we’re already on an uphill. The wind is hammering, and papers are flying around in the back where Denis’s son is sitting with a mechanic. Kids with ‘tap-taps’ are battering them as we leave kilometre 1 behind. The crowds seem to be all the way along the barrier and you can here them shout ‘Ramirez’ as they see him go by. 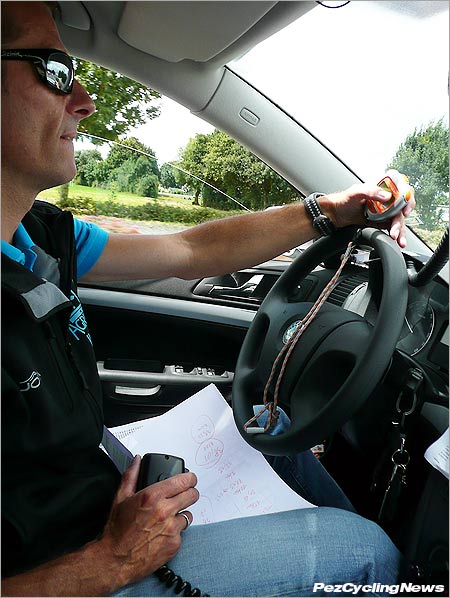 Denis drives like a rally pro, stopwatch in one hand, radio and pen in the other, and somehow keeps us barreling through the roundabouts under control even with a sheet of paper marked with intermediate times on balanced on the wheel!
“Allez, allez, allez, encore!!” The encouragement is constant as Eduardo grinds up another hard climb on a tough, windy course. “Allez, ces’t bon! Bien, bien, bien!” 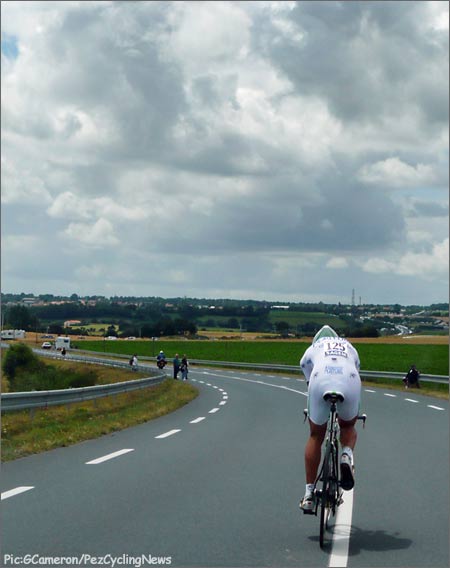 A roundabout looms into view, but Denis has the route memorized – “Sortie a gauche!” he tells our man over the radio. I try my frankly embarrassing French on Denis: “Le parcours aujourdhui, ces’t dificile?” “Oui, oui. Trй dificile ……” He makes a rollercoaster motion with his hand, and he’s not kidding. It doesn’t seem to be flat at all! And the wind is ferocious, buffeting Eduardo from one side, then the other as the course loops around crazily.
It’s tough for Denis to watch from behind … the car can’t even pull level with Eduardo. The encouragement keeps coming, every few seconds. The radio crackles: “Allez, allez!” 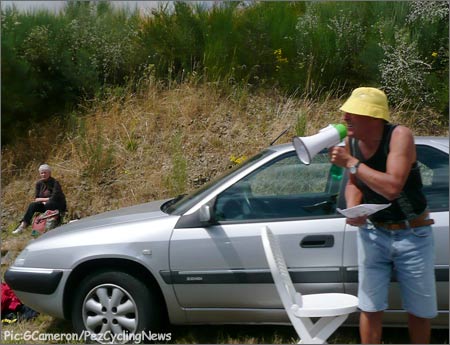 At 25kms to go,: “Neuf zero cinq” 9.05 – the check is relayed out immediately. All the fans are cheering because it’s the Tour, and because it’s obvious how hard a day it is. Germans, Aussies, French.

Still belting along behind our guy, Denis fishes out a pen and makes further notes … his paper looks like a complex math formula has exploded. Scrawls and numbers, but it all makes sense in our little bubble.

We hit a roundabout and immediately a drag up. I feel the car slow, and check Eduardo’s rhythm – he looks like his legs are barely grinding round, but the car speedo still reads 45km/h! It’s just incredible, and gives me some idea of what a Cancellara or Evans will be doing later (or even a Schumacher). 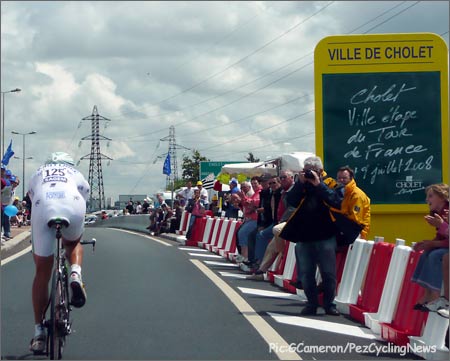 The time is flying past and it’s like Christmas morning when you’ve only got one present left. The closer we got to the finish, the more I wished the TT was longer. “Allez-Du! Encore!” Eduardo’s calves pulse and ripple as he tears along … this is a guy in good shape.

We hear frantic horns beeping … “Attention, attention!!” Milram’s Nicki Terpstra has caught Eduardo with the finish in the distance and flies by, with the Milram car in hot pursuit. 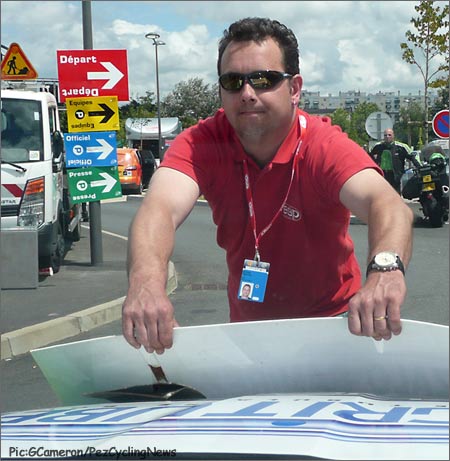 We’re directed off course with 100m to go, and Denis notes the time, then clicks the pen lid on. Job done, the magnetic name board is lifted off and we scream back to the buses. 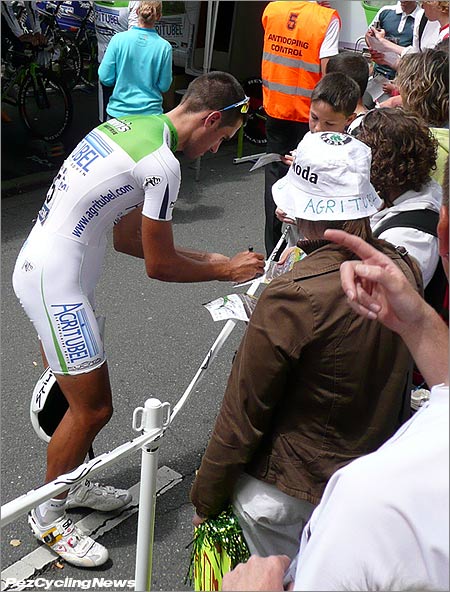 Eduardo gets off, checks his hair in the reflection then turns to sign autographs. Even after a 40 minute TT, the guy has time to speak to the fans. A class act.
I leave the guys to it, telling Denis the experience has been ‘exceptionel’. 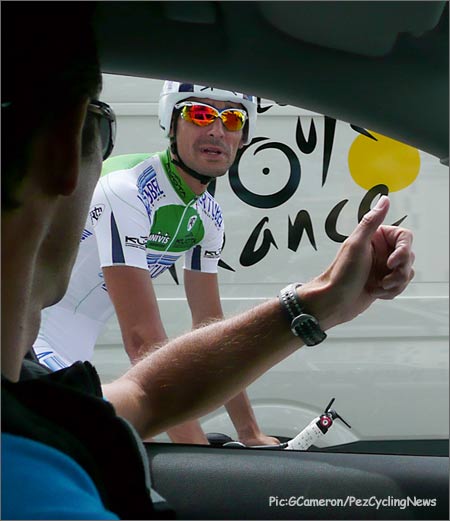 Eduardo finished 121st on the day, just 3′ 43″ back from Schumacher, which is a pretty good ride in anyone’s book.

A huge thanks to Michael Zellmann at SRAM for his help in setting things up. Michael is here to show SRAM’s support for, and appreciation of, the teams they work with – that’s Agritubel and Saunier-Duval Scott, and the absent Astana. “We have people come to all the major races to be on the spot to answer technical questions. Also to bring new products and give out freebies. It’s especially important in the first week of the Tour when we get most press enquiries about our kit.”

Michael’s a happy man because SRAM have had a great year with Contador winning at the Giro. “Being on site allows us to celebrate with the team. I got to see Romain (Feillu) last night in his yellow jersey which was pretty special. Having those experiences is a big part of our company’s history.”

Check out his blog at www.theroaddiaries.com for more on his week in France, and some cool pictures. This is all part of SRAM’s drive to connect with their consumers and clients, and helps to tie people into what the company is about.”We do this for our customers and that means the people who subscribe to magazines and read websites. But also for the mechanics and team management. We send people to all the training camps, and I don’t know any other drivetrain company that would go to such lengths.”

Also a big thanks to Denis, Eduardo and all the people at Agritubel.

Lesson of the day: Pack wisely …. today’s press room was on an ice rink! Felt like it, too.