The route of the Tour de France 2014 has been presented today and the news is that the Vosges mountains will again feature in the race and in particular a summit finish at La Planche des Belle Filles – the site of Chris Froome’s very first Tour stage win in 2012. Our very own Gordan Cameron was there roadside that day to catch the action and atmosphere that we will expect to see again in ’14.

Roadside Stage 7: The first mountain stage is always stressful, for the riders, for the organisers, for everyone. No rider wants to lose time through a lack of concentration. The organisers want everything to go smoothly, as the logistics of moving so many people on and off a mountain are a potential disaster. 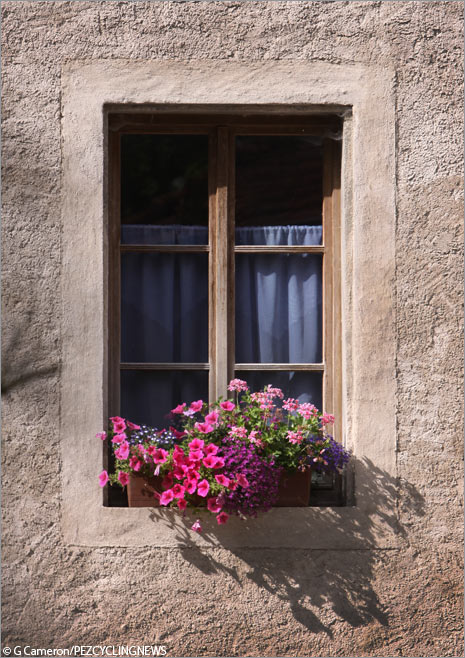 We pulled out of our lovely little gite, in the town of Brulange and were led through a labyrinthine sequence of twists and turns before the sat-nav delivered us to our chosen road, cutting over the race route between the caravan’s passing and the peloton’s arrival. We cut it a bit fine.

We’d been slightly terrified by the large, unsmiling farmers driving large unsmiling farm vehicles at fearsome speeds on the backroads. Given the staggering and disturbing number of dead cats on the road, if we’d been squashed, no-one would have noticed. 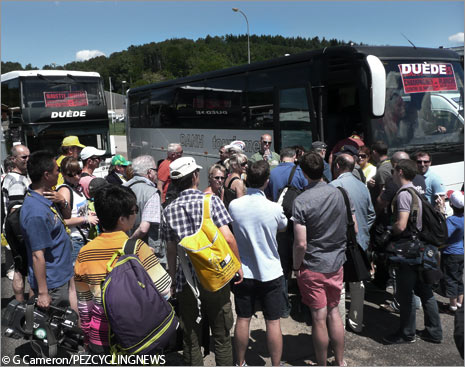 We’re heading up today, into the Vosges and the new summit finish of La Planche des Belles Filles. It’s not a long climb at 5.9kms from the foot in Plancher-des-Mines. It’s not high at 1035m, but it’s steep. Really steep. An average of 8.5%, with pitches way over 20%.

The practicalities of getting everyone up and down mean that the Tour organisers ASO have laid on shuttle buses to get the press and technical staff there and back. It’s all remarkably well thought-out and runs bafflingly smoothly. In the UK, there would have been some sort of half-arsed meltdown resulting in some of the buses only going half way. 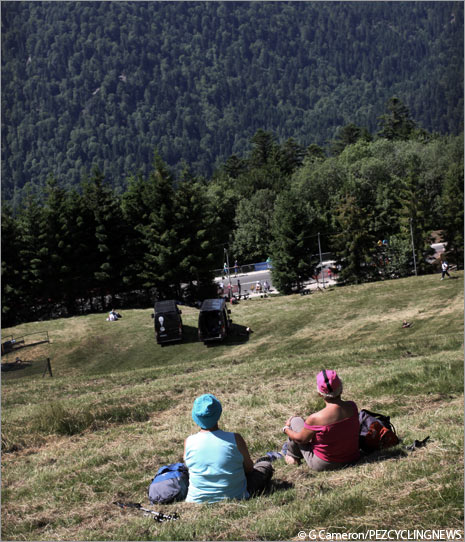 This finish is new in every way. First time on the Tour, and not surprising as it’s a brand new road. It was only laid in the spring, much to the fury of local environmentalists who reckoned it was all to do with political shenanigans and that there wasn’t enough consultation. There’s a new President in Paris, François Hollande, and some movers and shakers in the Haute-Saone are thought to have wanted to prove their capabilities. Hence, a new road built in triple-quick time. 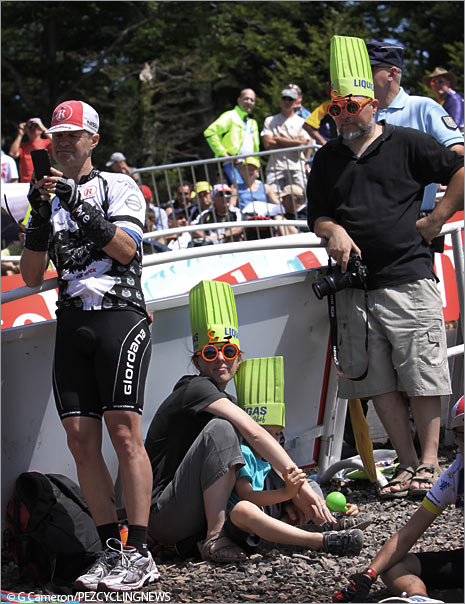 The bus howls and groans in protest but we’re up with time to spare. The sun is baking the new tarmac. You can smell it a mile off. It’s pristine, smooth and has been laid not an inch wider than necessary. There’s quite big lip to the edges so it’s just as well the crowd barriers are tucked right in. The fans have been waiting a long time already. 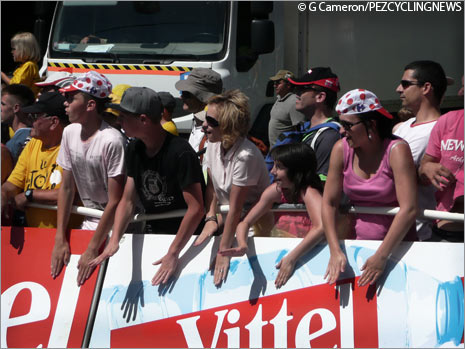 Hands are rattled off the advertising boards as the publicity caravan draws near. Freebies rain through the air. I take a keyring (I think) right between the eyes from point-blank range. 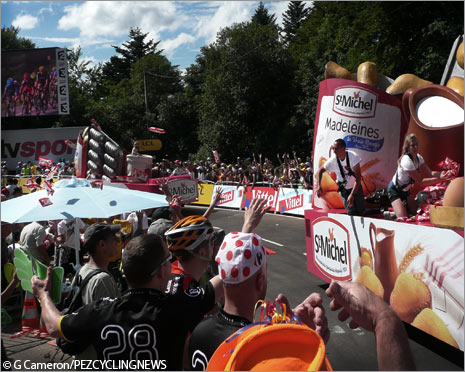 The Dutch fan next to me grabs it out of the air before I can even swear. On the other side of the road, an old man pleads like only the continentals can for something from one of the Gendarmerie recruiting vehicles, but he gets squat for his effort. 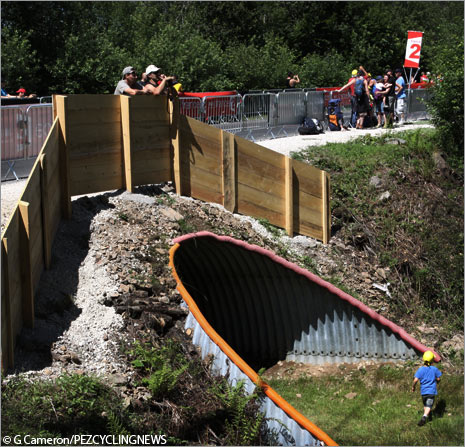 The cops are generally helpful. Some Norwegians opt for a last-minute switch of sides and laboriously hauls themselves and their gear over the barriers. A cop gives them a hand. What none of them realised was that there was a tunnel running under the road. This little fella was back and forth all afternoon. 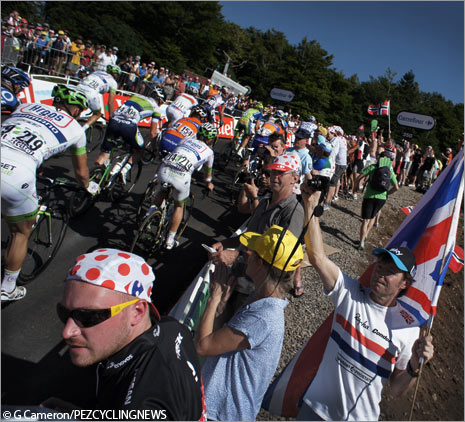 There’s a strong UK presence on the slope. The Norwegians are just up above us, making their usual enthusiastic racket. Australians across the way. 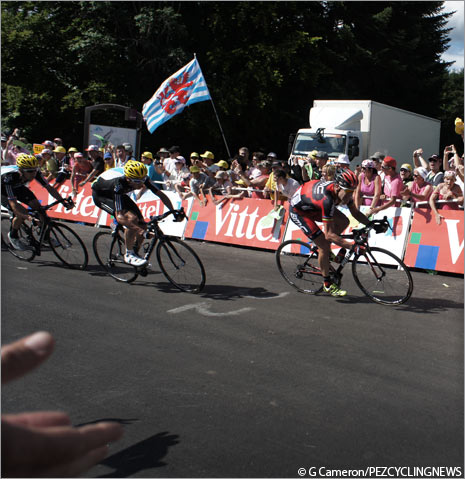 The stage action plays out on the big screen at the corner with 400 meters to go. Everyone has watched the Sky train thundering towards us. I’ve stationed myself at 375 to go, and wait. The roar funnels up the hill. They’re here! It’s Evans, absolutely flying as the leaders corner and hit a nasty pitch. The speed is incredible! I manage one shot before they’re gone. 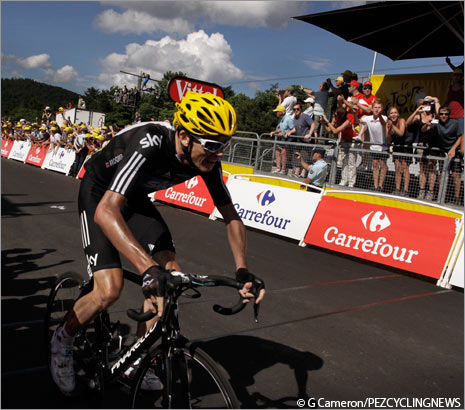 By the time the leaders get to 100 meters to go, Froome has jumped Evans and Wiggins for the win. It’s a hugely impressive ride from the past Vuelta stage winner. 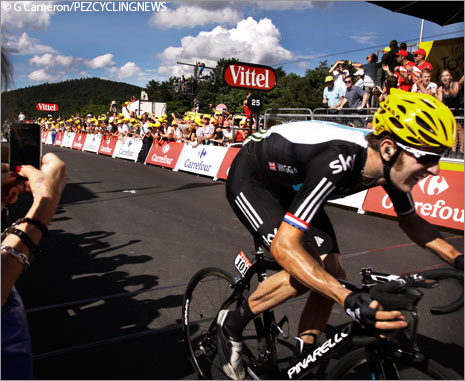 His reed thin leader is just seconds back at the top of the climb. It’s been a devastating performance, but Evans is not dislodged, Nibali is close, Taaramae as well. 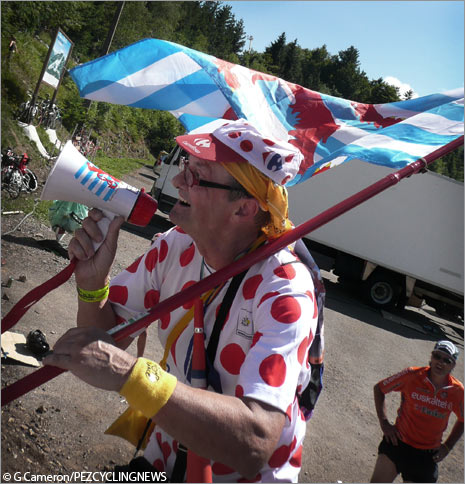 There wasn’t to much to celebrate for the massed ranks of Schleck fans: Andy’s not here, and Frank lost time. It didn’t stop the guy with the megaphone, who appeared to be suffering from that lesser-known condition of cycling Tourette’s: “Schleck!!! LUXEMBOURG!!! SCHLECK!! … FRANK!!! SCHLECK!!! ANDY LUXEMBOURG!! EH? EH?” 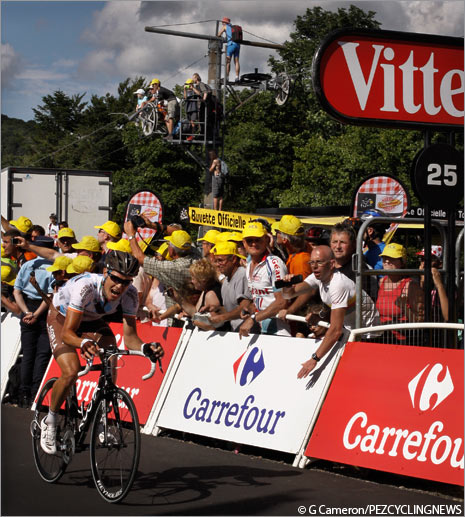 Ireland’s Nico Roche had a very good day, calmly riding himself into the top ten with an assurance that reminds us of his dad, 25 years ago! 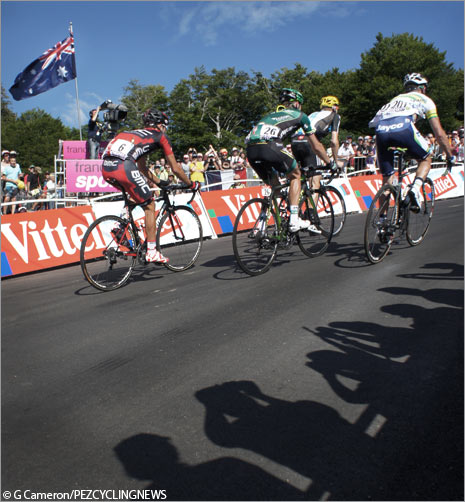 The gradient at the end of such a long, hot stage was ferocious, but I was constantly staggered – even the last guys on the road, the heroic Farrar (Garmin-Sharp) and Verduko (Euskaltel) took the corner in front of me at a pace I can only dream of. 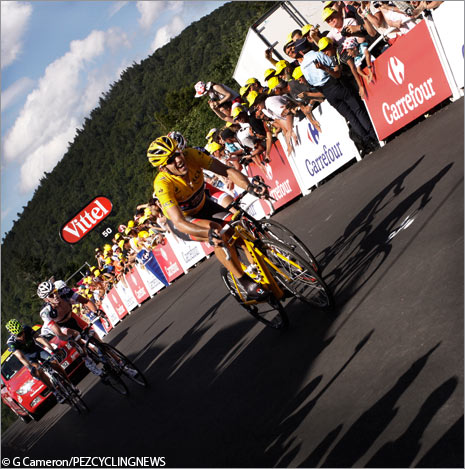 The yellow jersey put up a valiant defence today, but it was always going to be tricky for the Fabster to hang on on a climb like this. Still, a great week for him. There’ll be a new porteur du maillot jaune tonight. 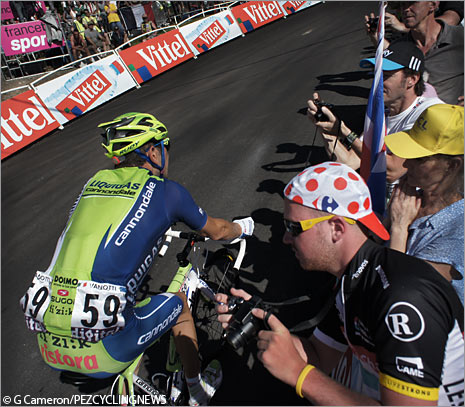 The fans are cheering everyone, regardless of nationality. There are favorites, but the lesser-known names get almost equal levels of support, hands hammering the boards. 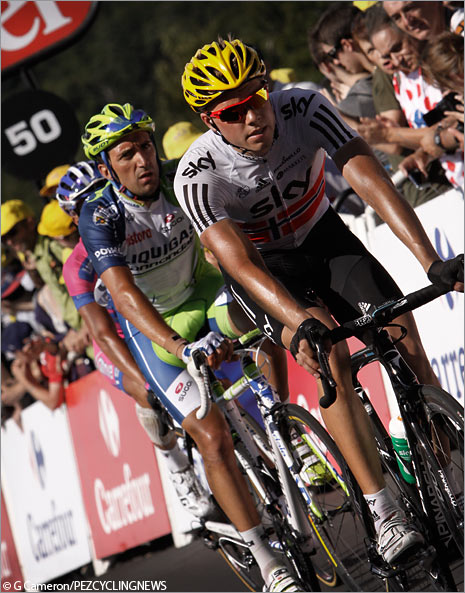 Onto the final climb, Edvald Boasson Hagen was working like a maniac setting a furious tempo that reeled in Albasini and Sorensen as the break finally surrendered. The young Norwegian eased off towards the end, job done. 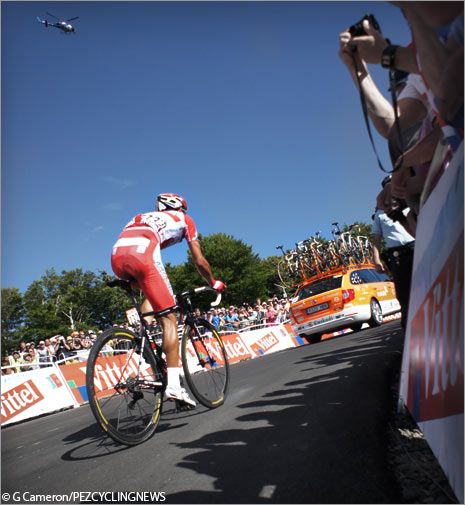 Riders continued to stream past, in ones and twos. The French TV cameraman swinging side-to-side for a good twenty minutes to film them all. 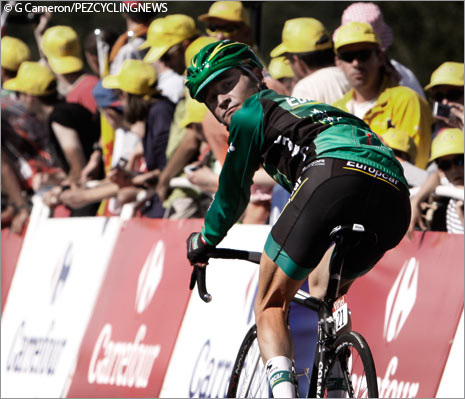 For Tommy V, it was another frustrating day. He’s been injured, crashed and is not where he was last year. On the way up he watched the race disappearing; on the way down he was wondering what might have been. 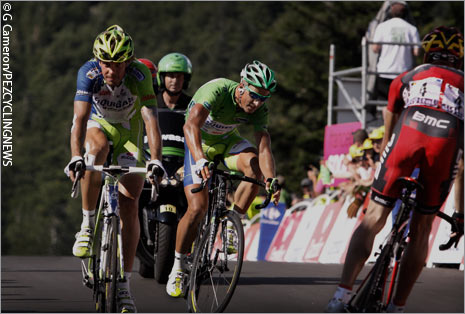 When you’re only a kid and you rip the Tour peloton a new arsehole three times in one week, it can go two ways. You get lauded like a God or you get a reputation. Sagan seems like a very decent guy and his celebrations just seem like mucking about to me even if not everyone agrees. This mock head-charge on the line got the crowd gasping at another near crash. 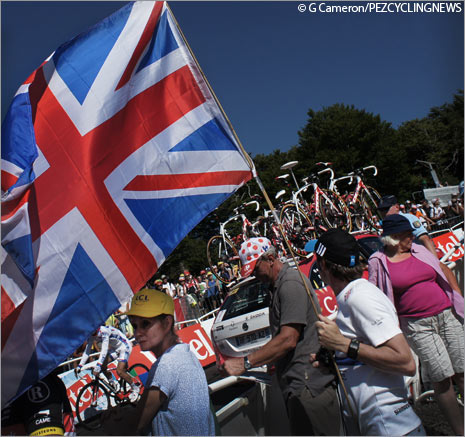 Was this Britain’s best ever single day on the Tour de France? You would probably reckon so … 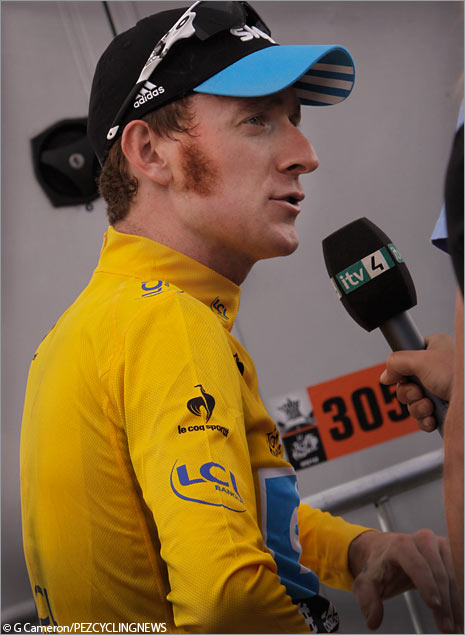 … the yellow and polka dots jerseys taken in the mountains, a stage win, and the world champion working like a Trojan for his mates. Oh, and Wiggins completed his set of Grand Tour leaders’ jerseys. 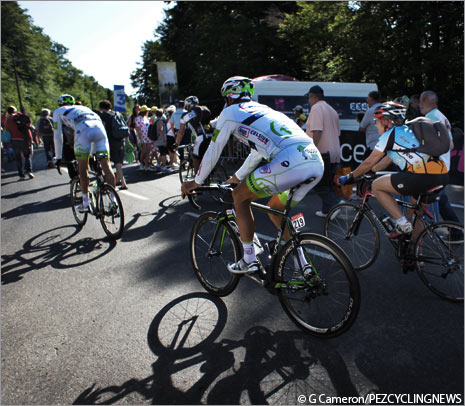 The team buses are parked at 7kms from the line. Riders roll past in the stream of general punters. Jens Voigt nips through the barriers after an official calls: “This way, Jan!” “It’s Jens!” laughs the veteran, as the official compromises: “We’ll call you Jans!” Horner and Kloden follow with different happy/glum expressions. Van Den Broeck is in the front set of a Lotto-Belisol team van animatedly discussing the stage implications. 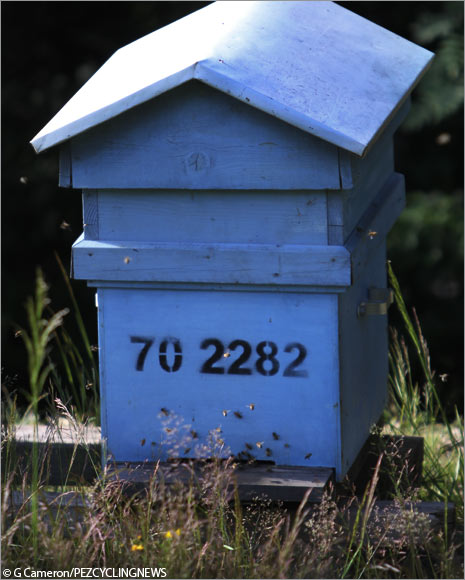 They should have made sure that an ecologically acceptable yellow paint was used for one of the hives scattering the slope down to the ‘navette’ pick-up point, but I guess some of the environmental lobby wouldn’t want to show too much favor to the perceived desecration of La Planche des Belles Filles. Looking out from the bus, there wasn’t to much litter left behind, so another point scored by the organisers and the fans. 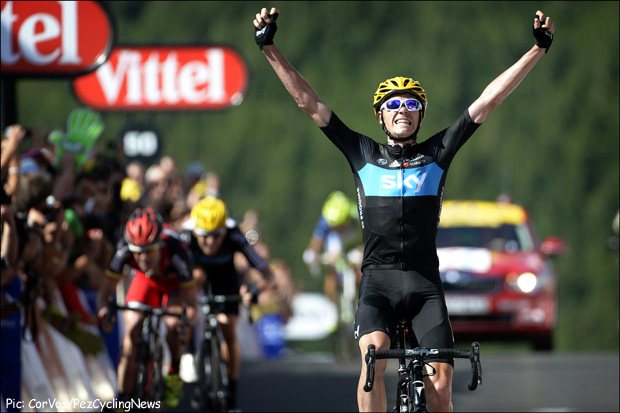 Chris Froome took his first Tour stage win at La Planche des Belles Filles in 2012. Another one at the same spot next year?

Keep it tuned to PEZ for more news from the Tour presentation from Paris later today.