By David Lipnowski On Jul 2, 2013
Share
Like PEZ? Why not subscribe to our weekly newsletter to receive updates and reminders on what's cool in road cycling?

The Tour lands in France proper, and the PEZ Roadside Crew lands at Le Tour. Kicking off our opening week coverage is new-to-the-crew photog Dave Lipnowski, who’s covered a lot of big sporting events in his career but never le Tour. This’ll be fun to watch… 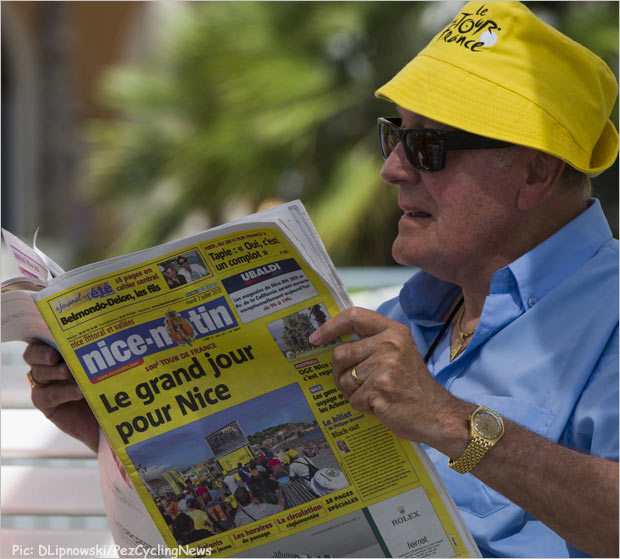 Hey cycling fans, my name is David Lipnowski and I’m excited to be contributing to PezCycling News again. I am based out of Winnipeg, Canada where I work as a full time professional photographer. I covered the 2012 Tour Down Under, as well as the 2012 World Track Cycling Championships in Australia last year for PEZ, and I can’t put into words how excited I am to be invited back to cover the 100th anniversary of Le Tour De France.

I have been in France for a few days now, and I have loved every minute. Though this is the first time I have been here, I’ve been preparing for this trip for a while now, ‘trying’ to learn French, eating lots of baguettes, and living with a French woman.

This was the first stage of Le Tour De France I have ever covered. It involved A LOT of walking. I walked at least 15KM today. After parking the car, I walked along the Promenade des Anglais, which is right on the Mediterranean Sea. The beach in actuality looks pretty terrible to sunbathe on, as it is very, very rocky. This didn’t stop hundreds of people though, with many women going topless (something relatively new to see on beaches for this Canadian). The city is unbelievably beautiful along the coast, with hills in the background, but the beach looks uncomfortable to spend any time on. 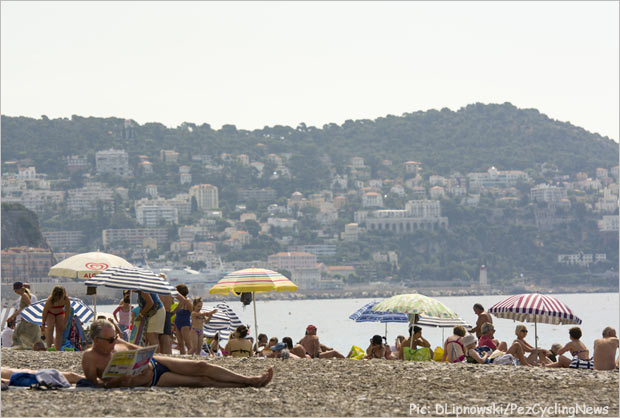 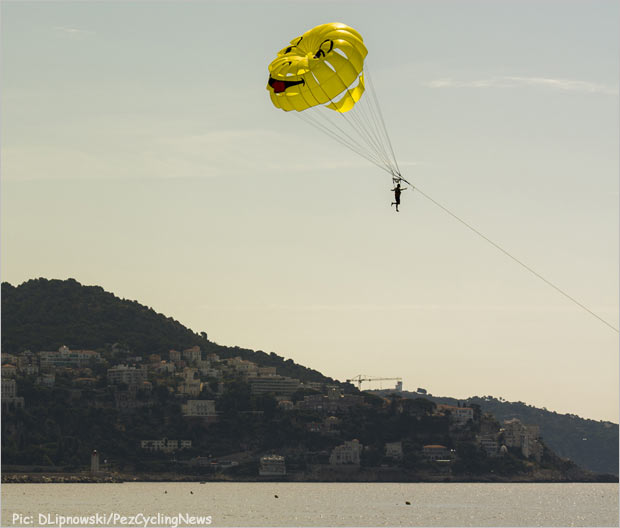 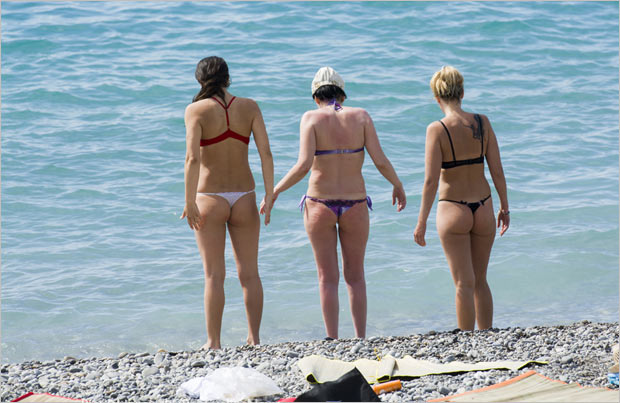 I arrived in Nice just before 10AM, but there were a few issues with the media accreditation, and by the time I had my pass around my neck, the caravan had already started its journey around 1:30PM. I had no idea how large the caravan was. I’ve seen it on TV, but the caravan of promotional vehicles stretched out over a kilometre or two, with hundreds of people involved in the daily procession. There were people dressed in every kind of costume, handing out everything from hats, to cookies, to full loaves of bread. 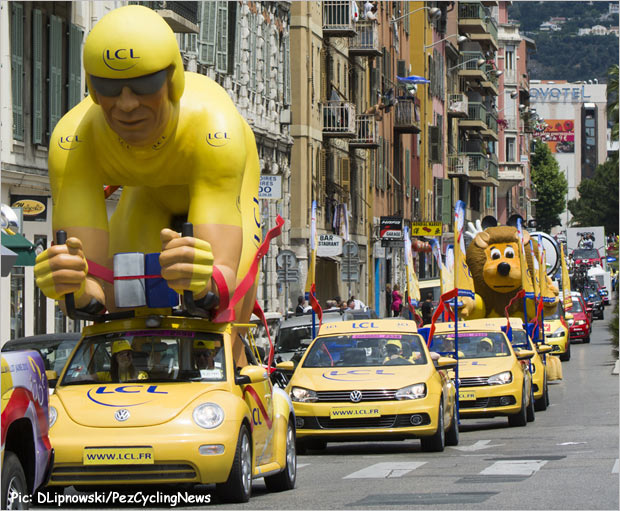 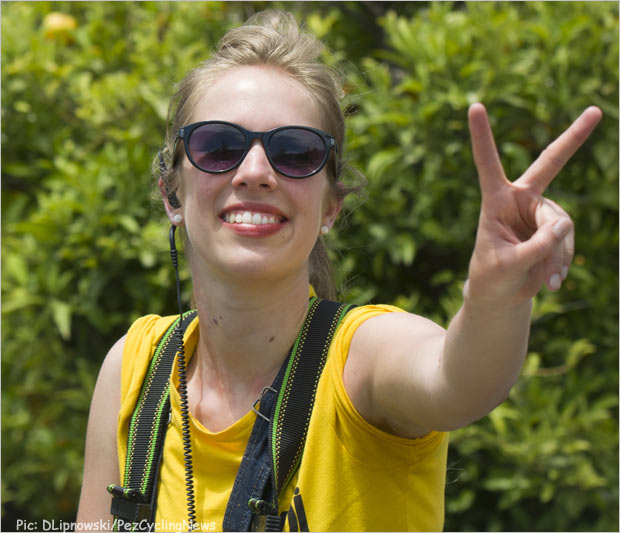 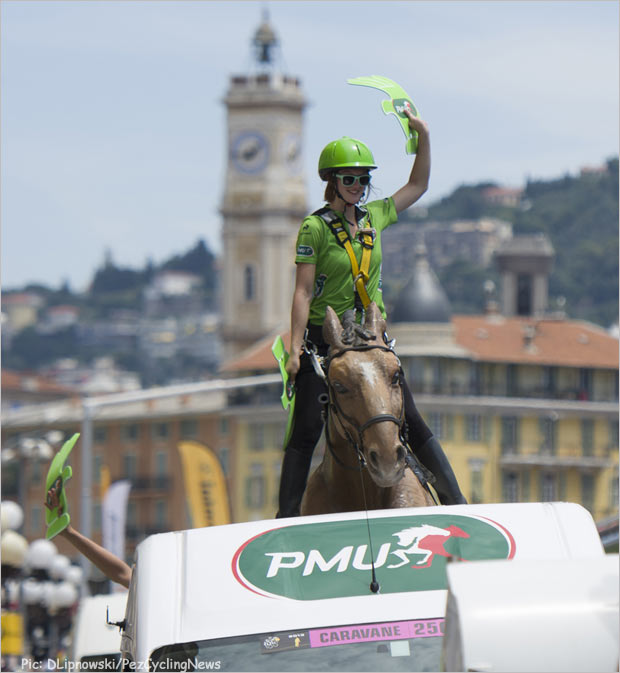 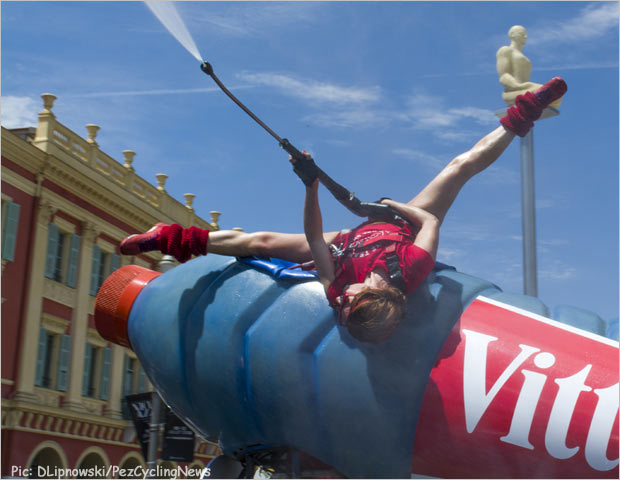 My first hand experience with the caravan. If you point a big lens at the girls on the floats, they will pose for you. 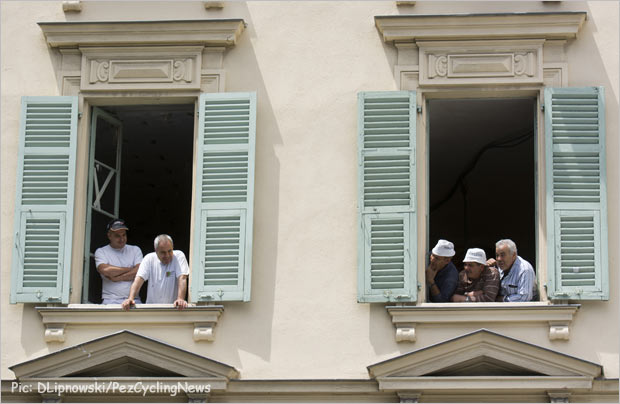 Fans watch the caravan from above.

The French LOVE their bread. People carry baguettes around like they are carrying umbrellas on a rainy day. I’m working on a long term personal project called “a portrait a day: 2013” (www.davidlipnowski.com/365) where every single day of 2013 I go out and make one portrait of one person. I try to have a chat with my impromptu portrait subject, and I post a narrative along with every portrait. Today I met Jacques Trin, who is a mascot for Banette. His job is to walk with a cart of bread and hand out bread (some with Nutella on it) in the middle of the caravan. He does this every single day over every stage of Le Tour. Most people ask him if it is hot in the baguette costume, but he told me that it is not as bad as it looks. Jacques lives in Paris, and when he is not dressed as a baguette, he is an actor, specializing in theatre. 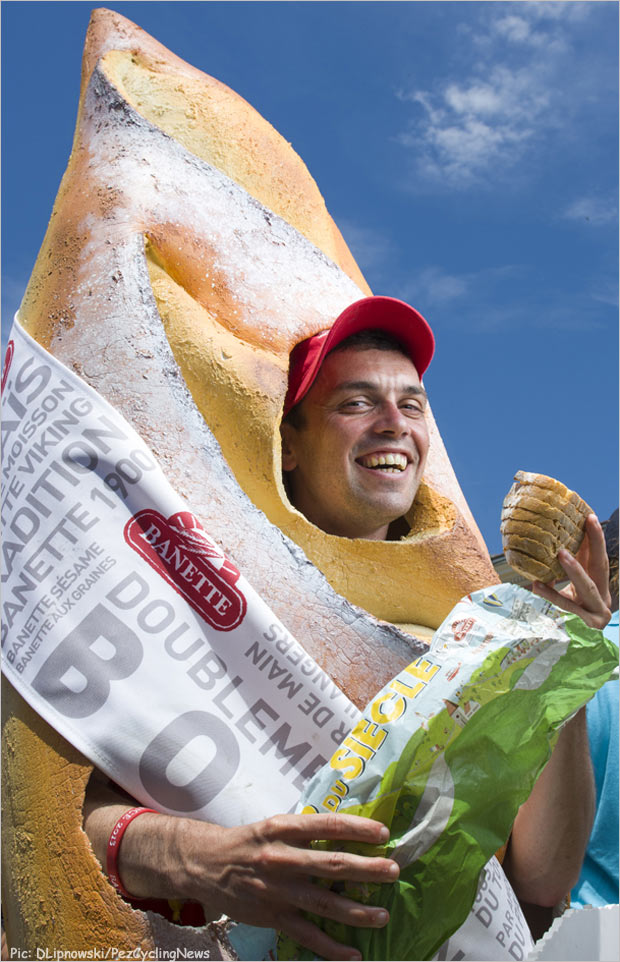 After snaking my way through the caravan, I headed to the start line to photograph the first few teams taking off down the starting ramp. At first I had incredible access, I was inches away from the riders as they got into their ‘zone’ for the 25KM journey around the streets of Nice. I can imagine that a lot of the 71 cyclists that started the day a mere 1 second behind the yellow jersey, dreamt of pulling on the Maillot Jaune themselves last night, and there wasn’t a lot of joking around prior to the start. I shot a few photos of mechanics prepping the stealthy time trial machines, as well as riders making their way to the start area. 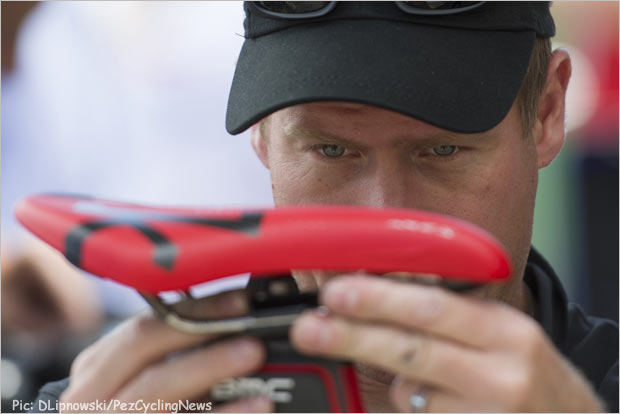 A BMC Mechanic preps the time machine for the team time trial. 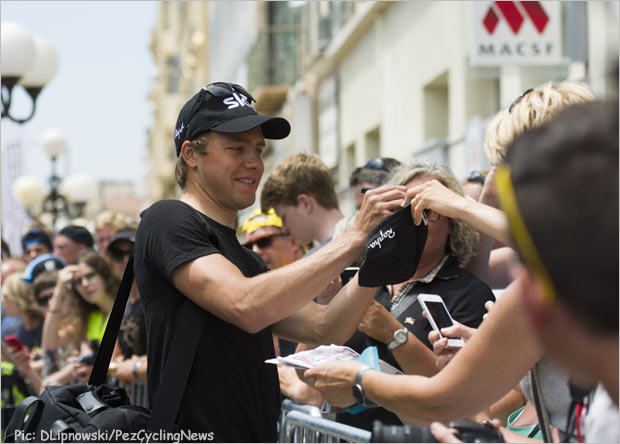 SKY’s Edvald Boasson Hagen signs autographs prior to the start of the race. 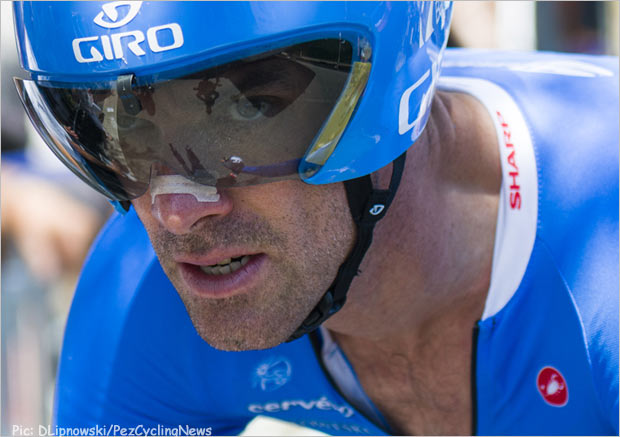 Garmin-Sharp’s David Miller was a contender for the yellow jersey, but Orica-GreenEdge had other plans. 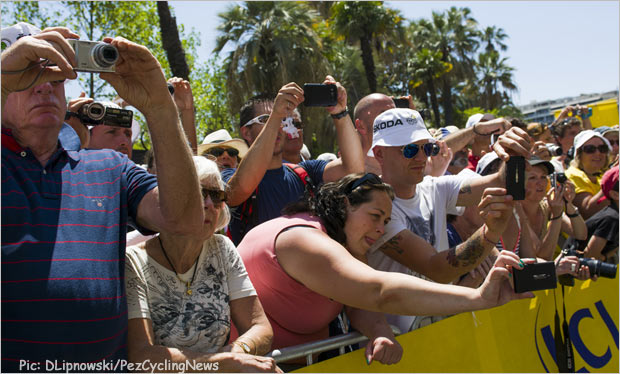 Fans spent more time looking at the back of their camera, than the actual race. 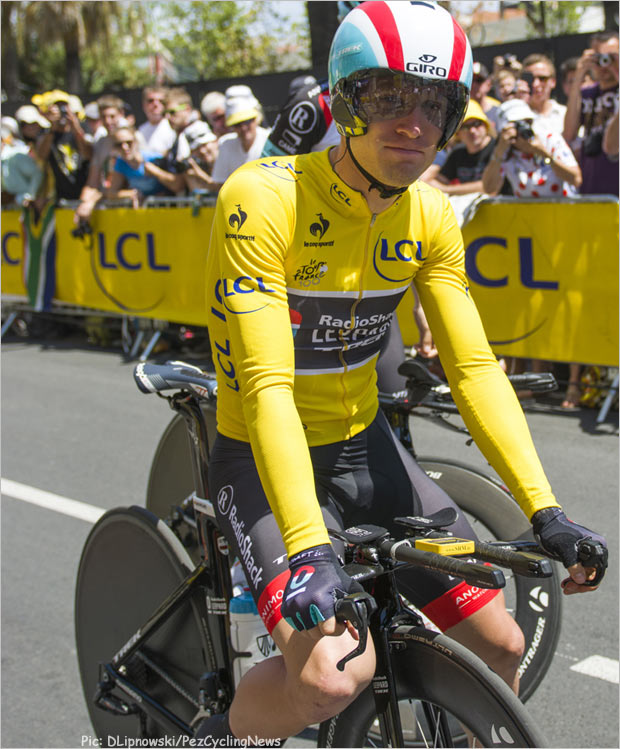 Jan Bakelants of Radioshack Leopard prior to the start. 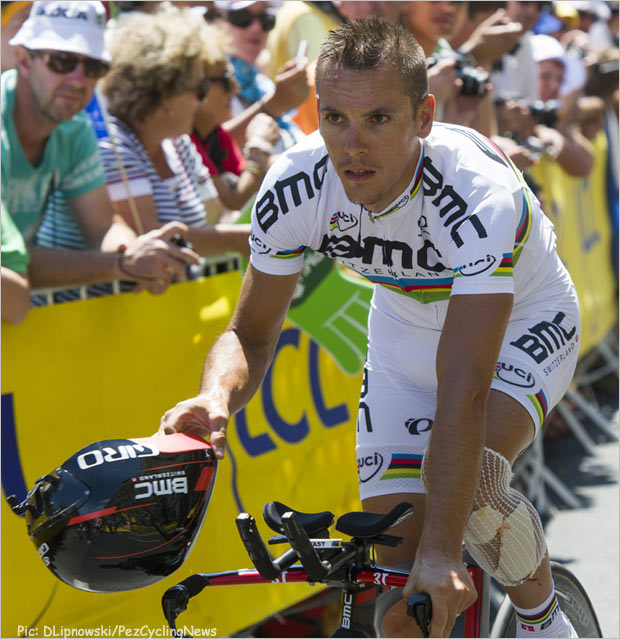 Philippe Gilbert makes his way to the start line. 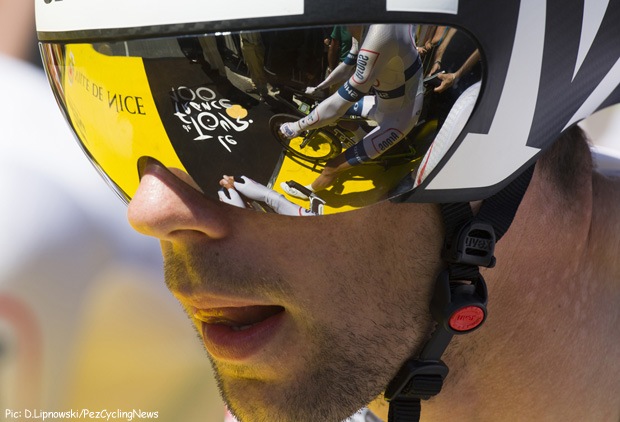 An Argos Shimano rider prior to the start. 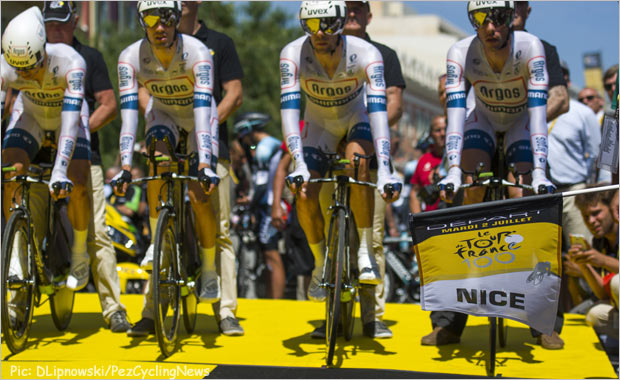 Argos Shimano about to descend the start ramp.

After a bunch of the photographers were asked to leave the start ramp, I continued my journey on foot down the route back towards the Promenade to try to get some scenic shots of the teams on the course, with the city and sea as the background. Along the route, I tried to photograph and talk to fans whenever possible. Just a few of the fans I met were a couple of young ladies studying in Cambridge, UK, a lovely woman enjoying a glass of wine at a street side restaurant, as well as Alfred Carlsson, a young boy from Sweden who is on holidays with his family just to see the 100th edition of Le Tour. Alfred’s favourite rider in the tour is Peter Sagan. 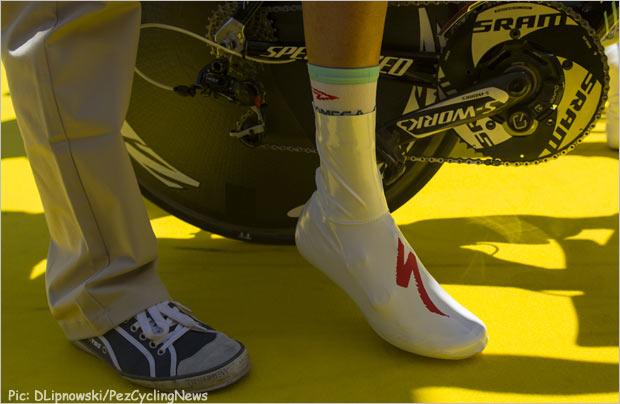 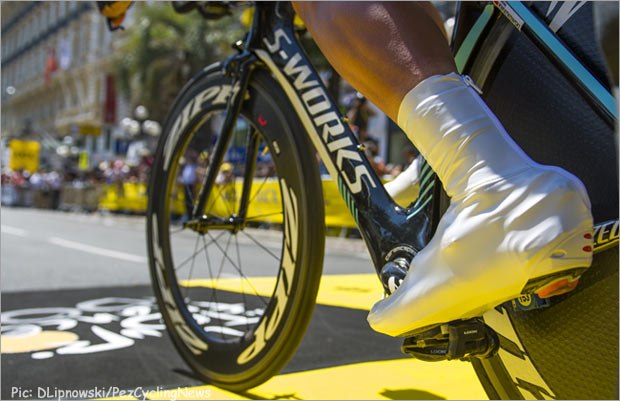 I was pretty close to the superstars of cycling at the start line. 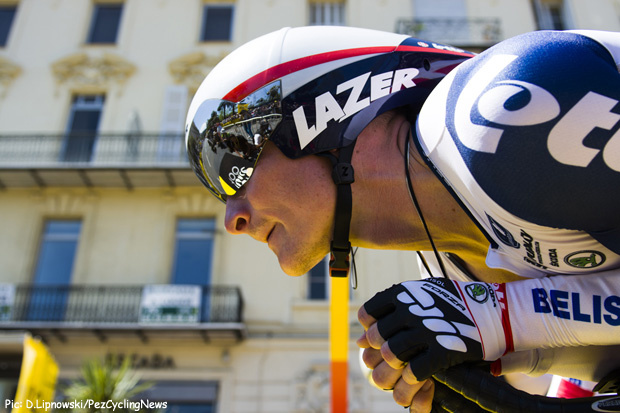 Lotto-Belisol rider André Greipel gets in the zone at the start line. 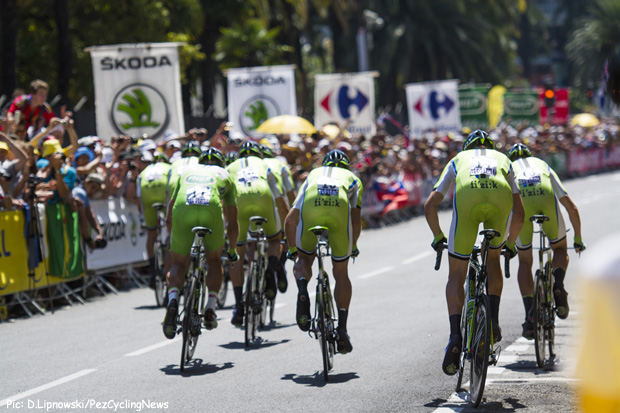 Cannondale is off the line 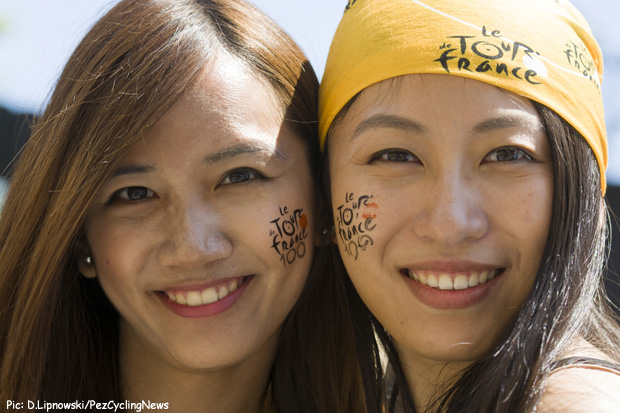 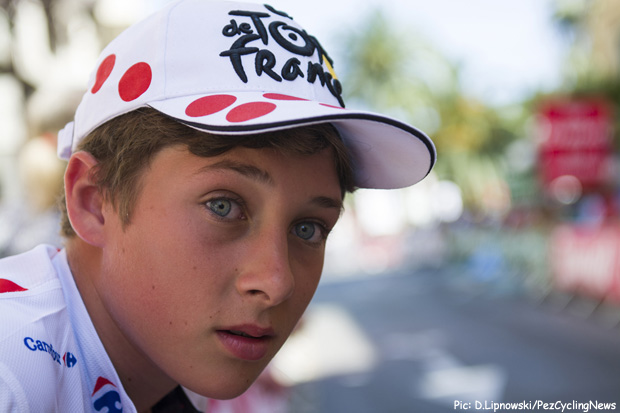 Alfred Carlsson came all the way from Sweden to see Peter Sagan compete in the Tour. 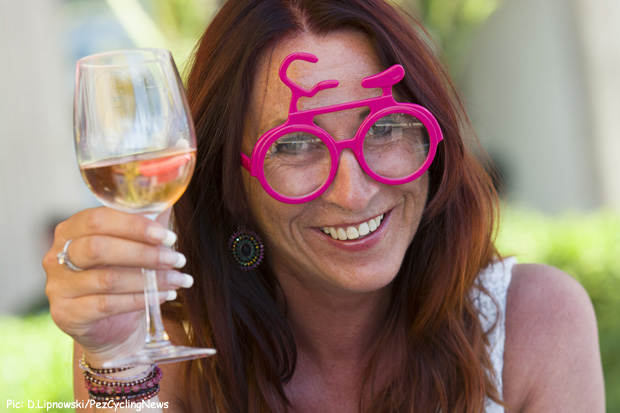 A glass of wine with the Tour.

I had an absolutely fantastic, albeit exhausting day today, and my only disappointment was not being able to get to a high vantage point to get some scenic shots. It was not for a lack of trying. The roads were completely blocked off with no crossing allowed, meaning I was never able to get further than 500M from the finish line. I tried asking in several hotel lobbies for balcony access, but no one was able to help me. The highest vantage point I was able to secure was atop an electrical box a few meters away from the course. 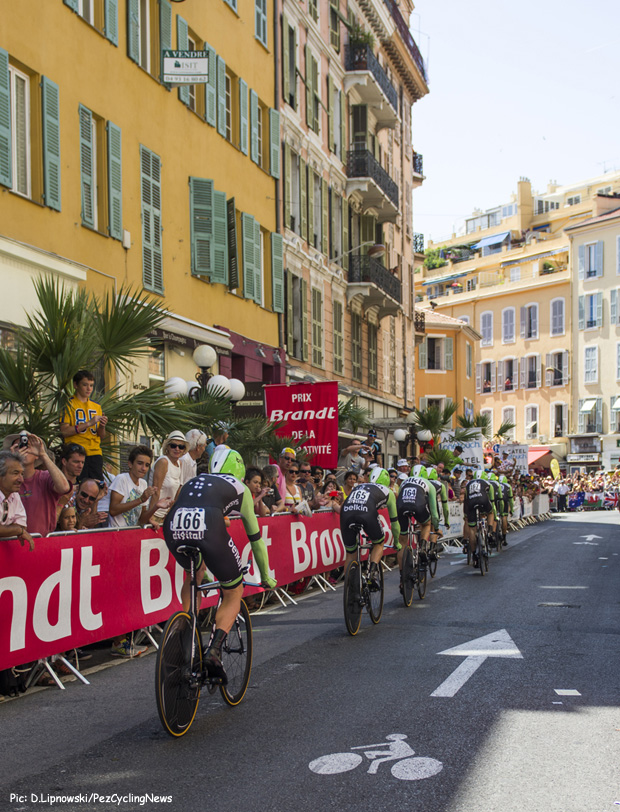 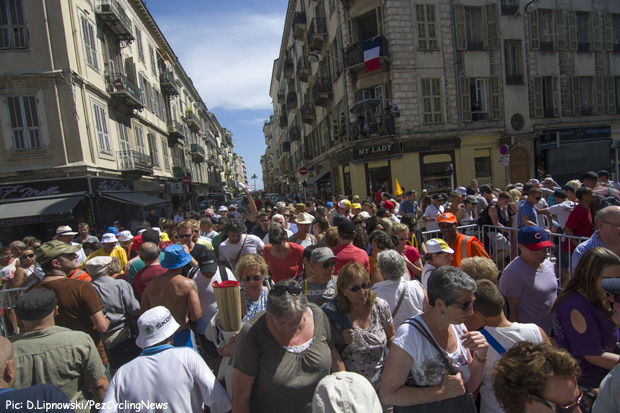 Large crowds hampered my efforts to span the course as I had planned. 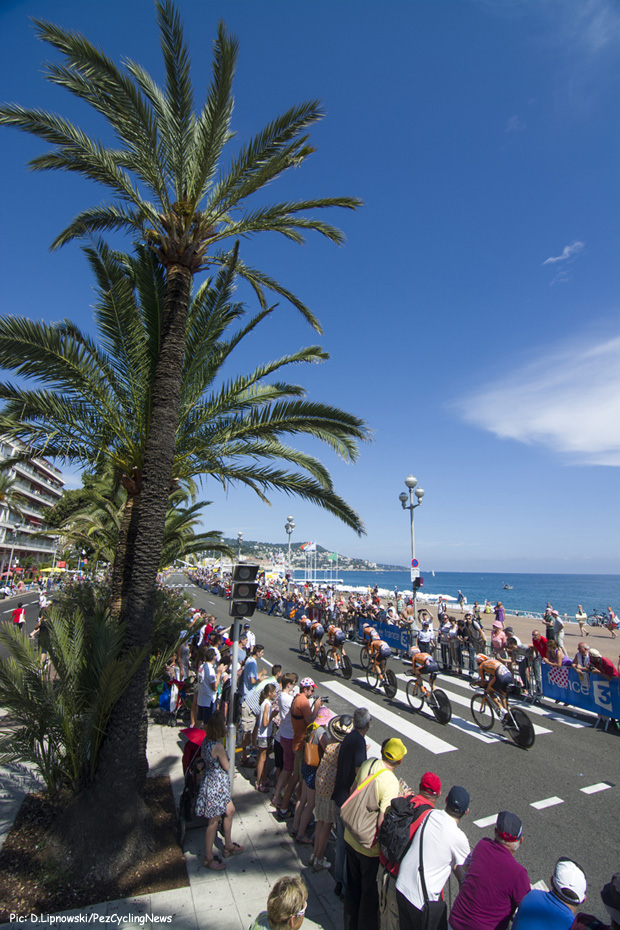 The riders had a great view of the sea, but they had more important things to concentrate on during their 25KM journey around Nice.

SKY makes their way down the Promenade. 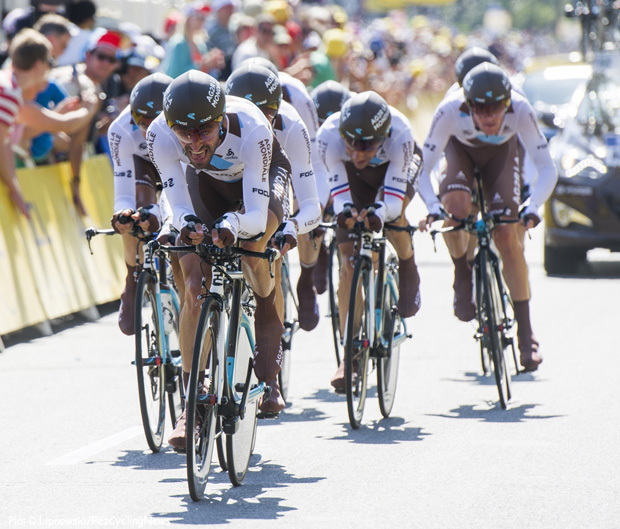 AG2R gives it their all as they approach the finish line with 350M to go. 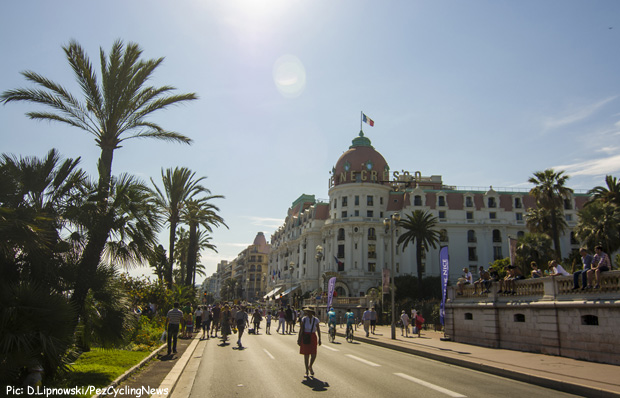 My view with 3K to my rental car!

Keep it dialed PEZ for all the Roadside action from the Tour de France.