TDF Roadside St.5: Today’s journey began with the discovery that the road directly outside of our hotel was blocked by the Gendarmes. There were dozens of the Police officers lining every entry point to the road. At first we were allowed onto the empty street with our press sticker, but journeyed only 500M before one rogue officer stopped us.

It’s funny that there is one out of 10 officers that want to wield their power. The area outside of our hotel was very industrial, and ugly, but perhaps a convenient place to watch the race go by without the hassle of navigating the roadblocks and crowds. 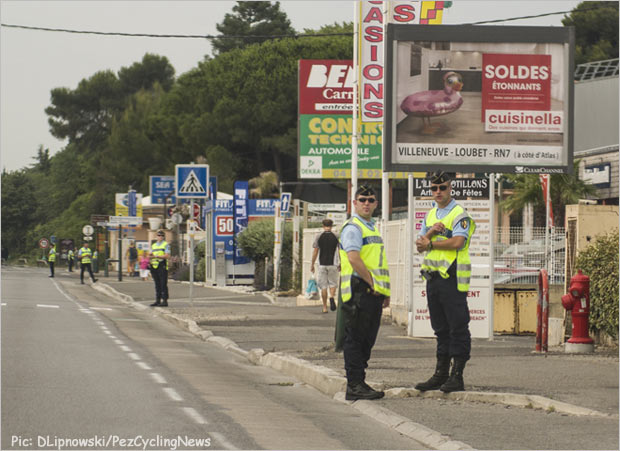 No traffic for the first part of today’s journey to Marseille.

The plan was to drive directly to Brignoles where the main highway intersects the race route. When researching the town, there were many articles about how Brad Pitt and Angelina Jolie bought a £35m château a few years back. Their home, Château Miraval, is a Historic Monument, and the fact that it is situated in such a small town would allow privacy for their family. According to the Daily Mail, the property spans 1000 acres, and includes a lake, a swimming pool, 20 water fountains, and of course, 35 bedrooms. I guess they are planning on expanding their family in the future. 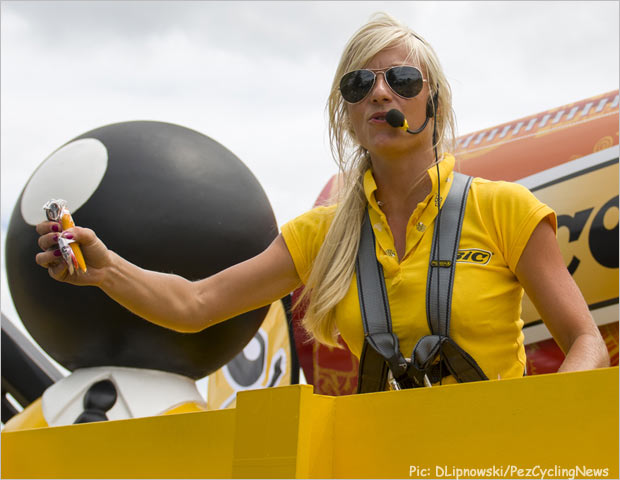 Looking at the maps, the area seemed to be beautiful countryside. When I arrived to the area, the only place crowds gathered to see the Tour pass by was at an ugly intersection with grocery stores and gas stations in close proximity. This was not the beautiful countryside I had hoped for. Since I was already there, I placed myself in the crowd to watch/participate in the caravan giving out trinkets. 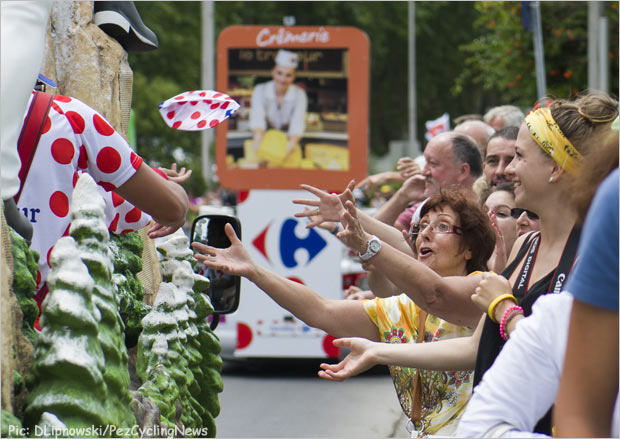 The caravan is half of the Tour experience when you are waiting on the side of the road for hours. It is the pre-entertainment to the big show of the race. When you are in the crowd of people, you really have to be paying attention to what the caravan is throwing out, as I witnessed several people getting hit in the face with mini sausages. The entire course is not barricaded, and I saw many kids run into the street to pick up items that bounced back into the street. The caravan provided lunch for today, with mini sausages, drinks, crackers, cookies, and candies. Other items tossed in my direction included: pens, hats, beer cozies, keychains, and even condoms! 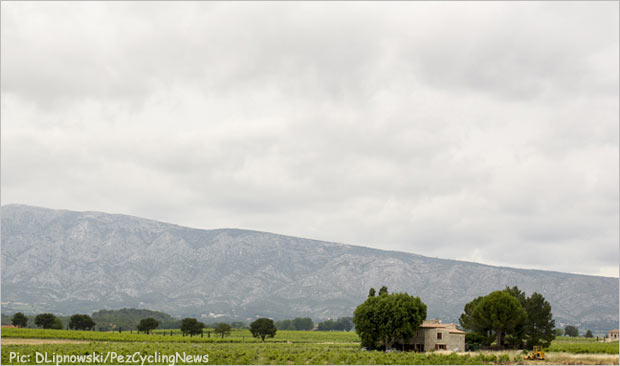 It was a nice drive from Brignoles to Marseille, although it did rain a bit.

After the caravan passed, I decided to not stick around for the race, as there was not a very photogenic area to serve as a backdrop. I decided there was enough time to try to make it to Marseille to try to catch the finish. Traffic was unbelievably slow, and I was afraid I wasn’t going to make it, with 2 hours to the scheduled finish. Luckily, after flashing my credentials, like Moses parting the Red Sea, the Gendarme created a hole in the massive crowd and allowed us to join the back of the caravan. It was a very cool experience to drive the last few kilometres of the route. Within 1KM of the finish, there is a larger than life statue of David. There is nothing like the naked David to greet you after 5+ hours of racing in the heat. 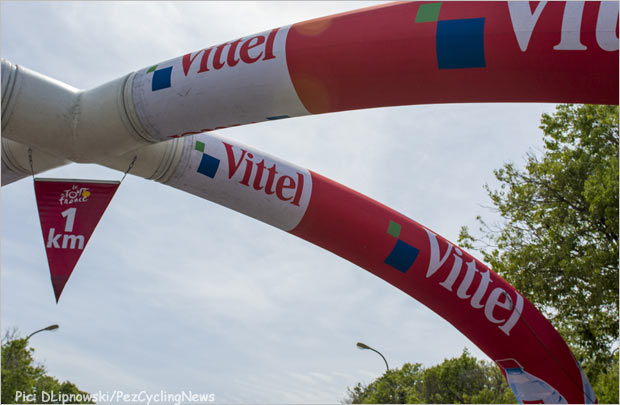 Driving under the 1KM to go flag! 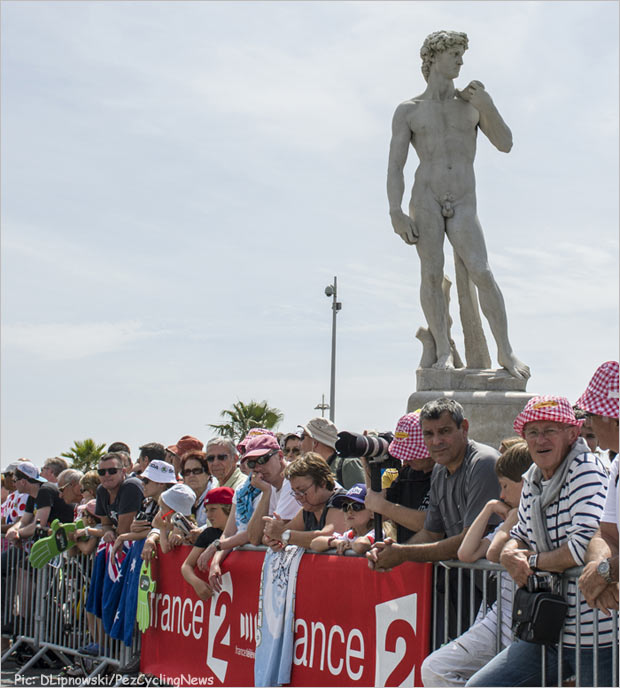 The naked David greets you within 1KM to the finish. 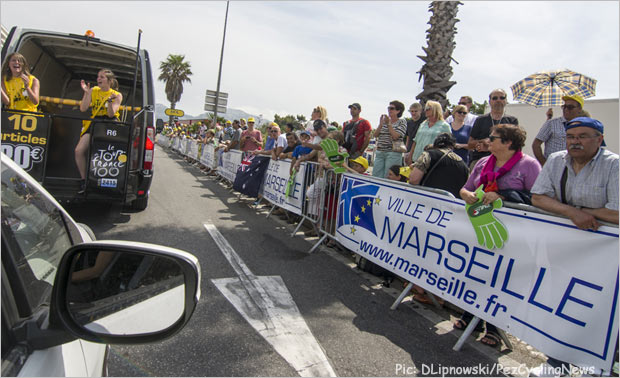 I think I accidentally became part of the caravan today…

The crowd awaits the finish. 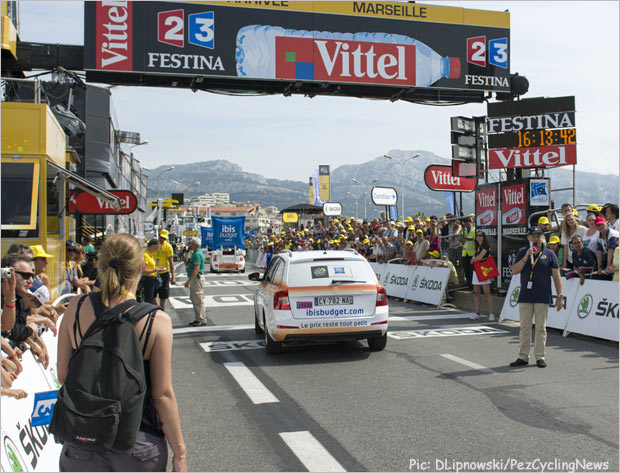 I very much enjoyed walking over the finish line today in Marseille.

Having arrived at the finish line, I looked for someone for my portrait a day challenge. I found Vanessa, the only spectator I saw wearing a bikini. I initially asked to photograph her for the Daily Distractions, but after not being able to find anyone else, I went back to ask her. I tried telling her that she was the only smart one to dress appropriately for the weather. Vanessa is a nurse from Vaucluse, and only has a few days of vacation to spend in Marseille with her kids. I asked Vanessa if she was a big cycling fan, or at the Tour to enjoy the atmosphere? She told me she is a triathlete, and enjoys the cycling aspect. She also named her son Sean after a famous cyclist… 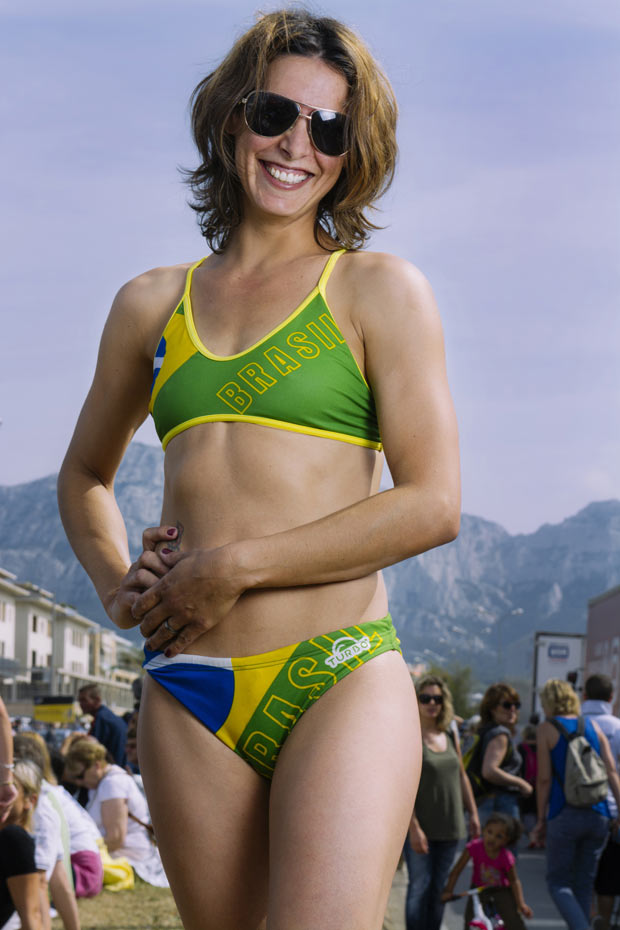 Vanessa was today’s portrait a day. 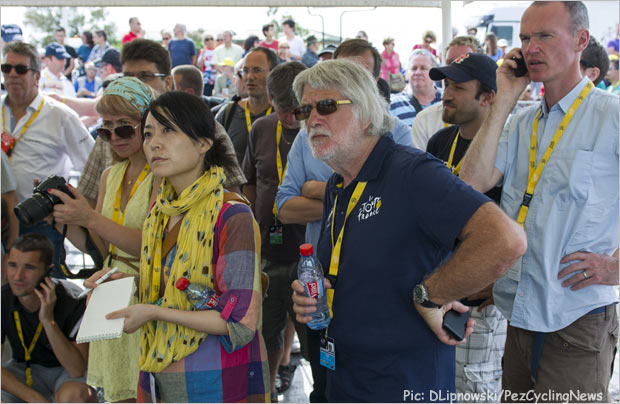 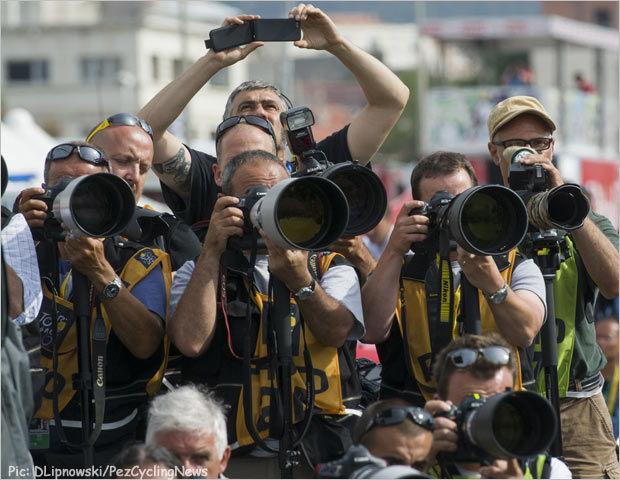 Photogs get ready for the finish, wonder how his iphone pic turned out… 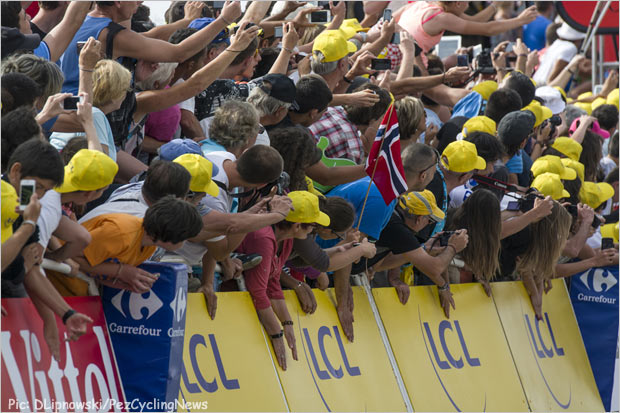 You can really feel the excitement of the crowd as the leadout brings the top guns into town.

Continuing my lucky streak, I was able to find an open spot right at the finish line to watch an incredible sprint. It was unbelievable how quickly the leadout gets the top sprinters to the line. They came out of nowhere, and it was fantastic to see Mark Cavendish duel Peter Sagan to the line. 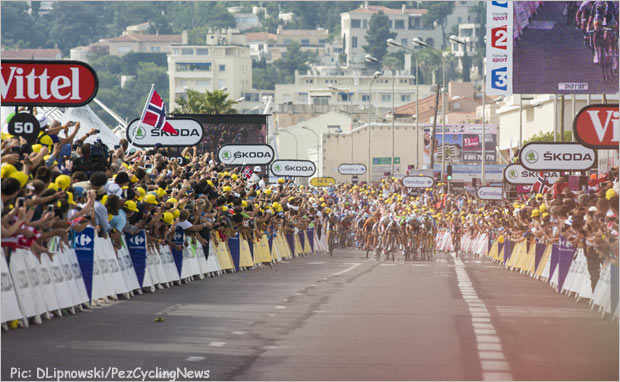 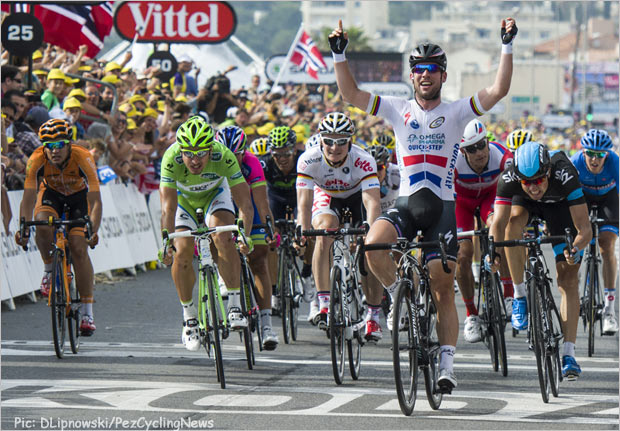 On the way back to the rental car, I saw fellow Canadian, Garmin-Sharp’s Ryder Hesjedal cooling down on a trainer outside of the team bus. Though he was clearly exhausted after racing the second longest stage of this year’s Tour, he signed autographs for anyone that asked. That was quite incredible to see. I had a chance to speak with him for a few minutes, and asked him if he was able to celebrate Canada day at all on Monday. His response was: “nah I’m in the zone here, no time for parties”. I also asked the laid back Canuck if he saw the other two Canadians, and he told me that he did in the race, and was able to wish them a happy Canada Day. 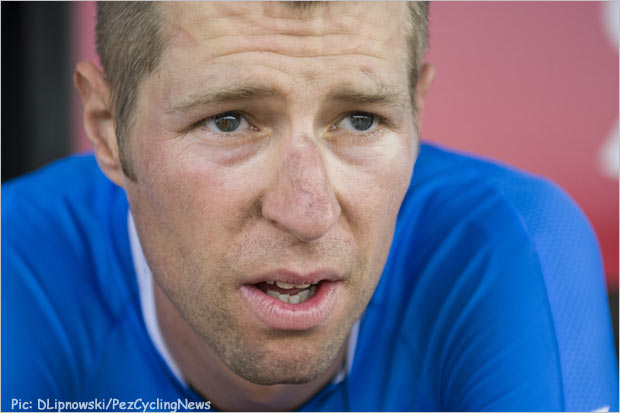 Clearly exhausted after the second longest stage, Ryder had time to sign autographs for his fans.

– Another big day on Le Tour, and it’s only just getting started.
– a demain –