Roadside St.7: The day started off without clear direction. I wanted to drive the course, but the car pass I was given should not allow for direct course access. I decided that I would try to meet up with the tour at the Abbaye de Valmagne, which seemed like a beautiful spot to watch the tour go by. Well, as luck would have it, we came to a blockade, and a Gendarme came and opened up the street to us. Little did we know we were now on the race course. 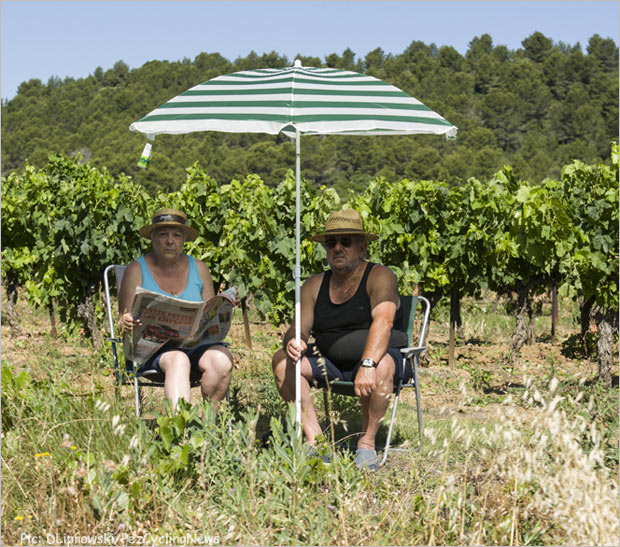 Fans wait in under an umbrella in a vineyard. It turns out that many fans wait for the tour in close proximity to a vineyard.

We drove right up the Abbaye, but it was closed, and you could barely see it from street level. In fact, if you were not paying attention you could easily miss it. The only way to get a good view was to climb up a little fence. 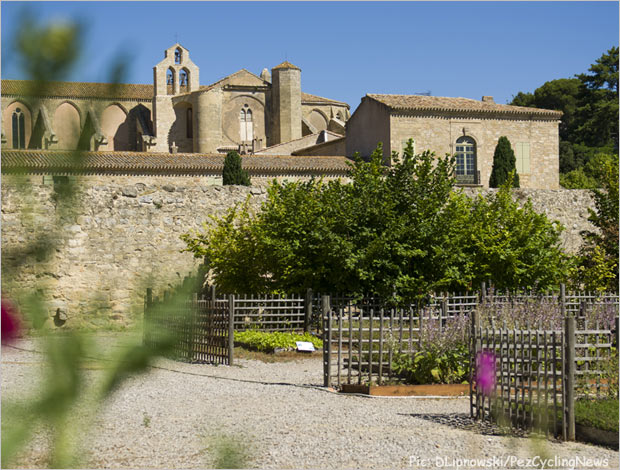 The view of the Abbaye de Valmagne, from climbing up a fence.

With the car parked just down the street, I decided to walk around the area to see how the fans were watching the tour. Most were trying to wait in any sliver of shade they could find. With mid 30’s temperatures today, the heat was brutal. There were a lot of bad sunburns spotted on the drive today. I’m sure the pain of the sunburns is bad enough, so I won’t post any embarrassing photos. 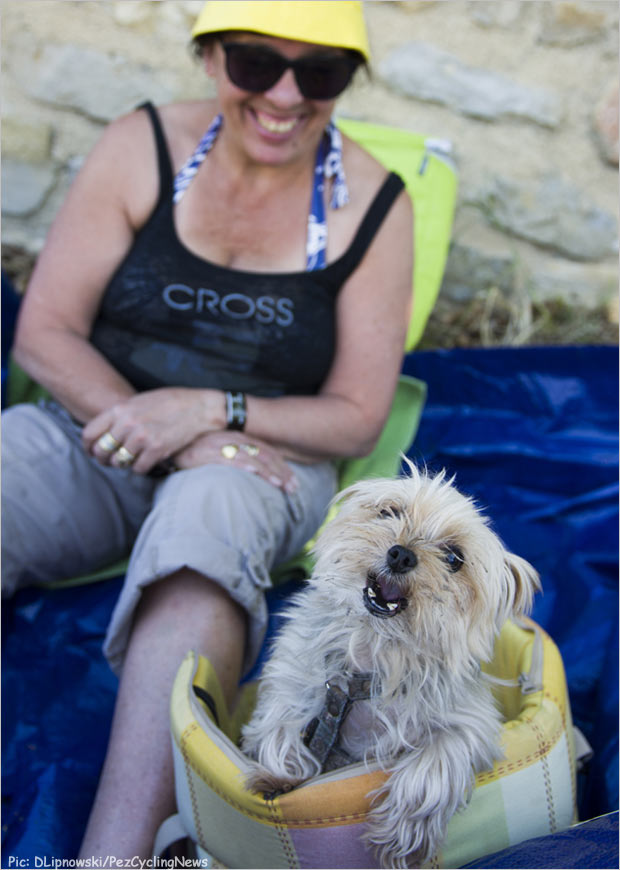 After checking out the Abbaye area, there was no point in waiting 3 hours for the peloton to go by, so I decided to hit the road again to try to get to the finish line in time to see the finish. Just as I was walking back to the car, the Culture Velo junior team that rides part of the route rode by the Abbaye. 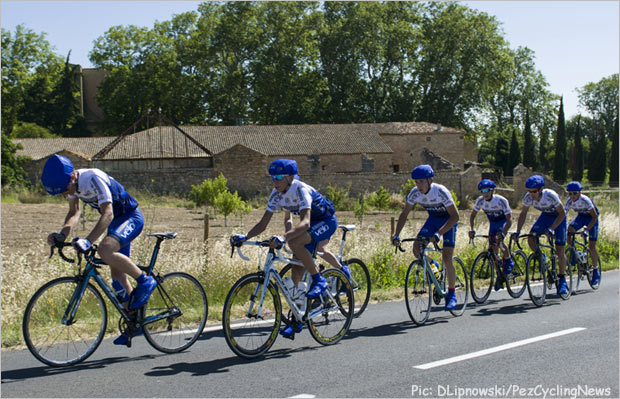 The Culture Velo junior team rides past the Abbaye de Valmagne just ahead of the caravan. 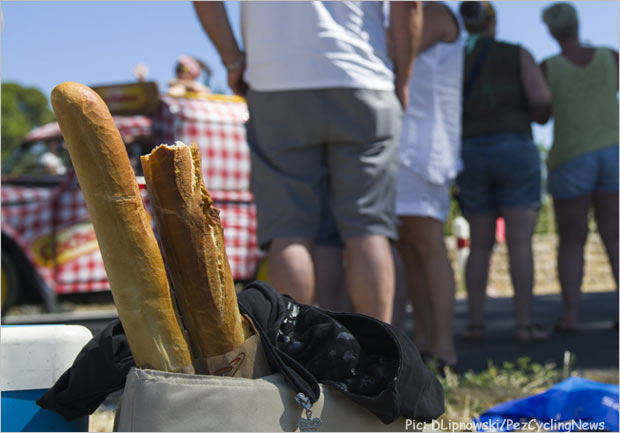 These baguettes had a great view of the tour!

We ended up driving on the main course for about 3/4 of the route, including the category 2 climb, Col de la Croix de Mounis. At one point an official route car signalled us to roll down our window to talk to them, and they told us we had to stay at the back, and not to pass into the caravan section of the procession. That was more than fine for us, as all I really wanted was to do was to concentrate on getting scenic photos of the magnificent hillside landscape, as well as fan photos. After all of the uneasiness and stress I had last night about how we would get around the course today, it all resolved itself with a bit of luck. 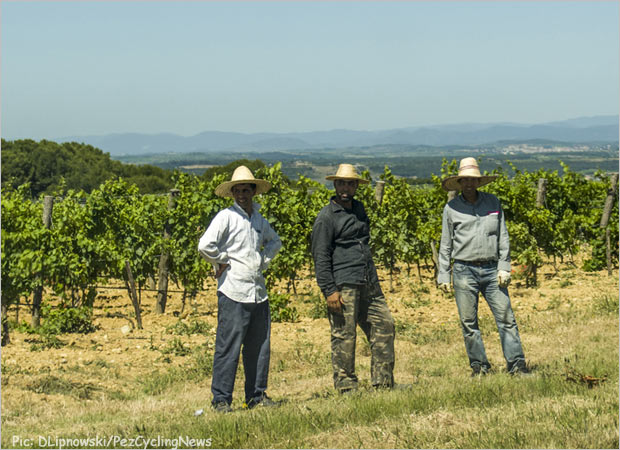 The day ended up consisting mostly of trying to snap shots of fans out of my window, sometimes at speed (which was not easy to do). As you can see, a lot of the course today passed by vineyards. Absolutely everyone from all walks of life came out to cheer on Le Tour. There are a lot of seniors sitting on lawn chairs in the shade, entire schools, cyclists kitted out in their local club gear, and everyone in between. The fans along the mountains have been crazy. 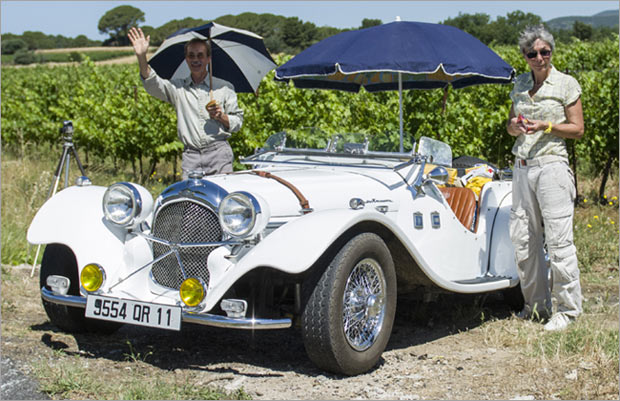 Fans waiting for the tour by a vineyard.

The hill tops have been packed with campers already. It’s fantastic to see fans from so many countries flying their flag proudly, and celebrating the tour together amongst so many nations. It still boggles my mind how long the fans stand in the blistering hot sun waiting for the caravan to come by, and then 2-3 hours more just to see the race pass them by for maybe 10-20 seconds. After a few seconds watching the race, it’s all over (perhaps not the drinking though). 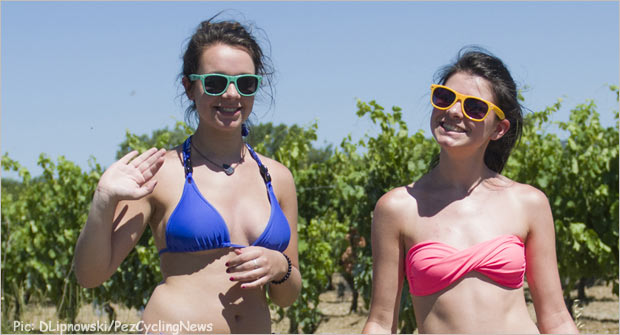 The long wait for the race makes for some excellent tanning opportunities. 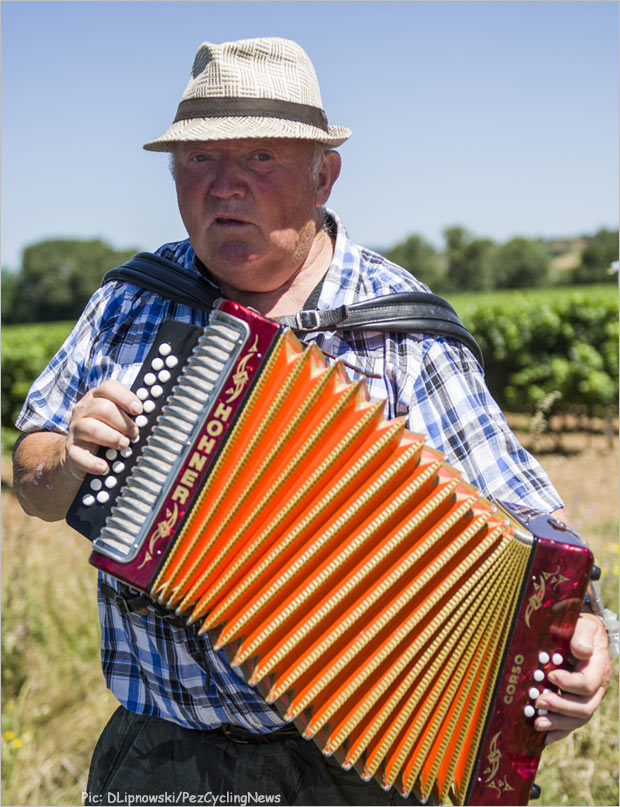 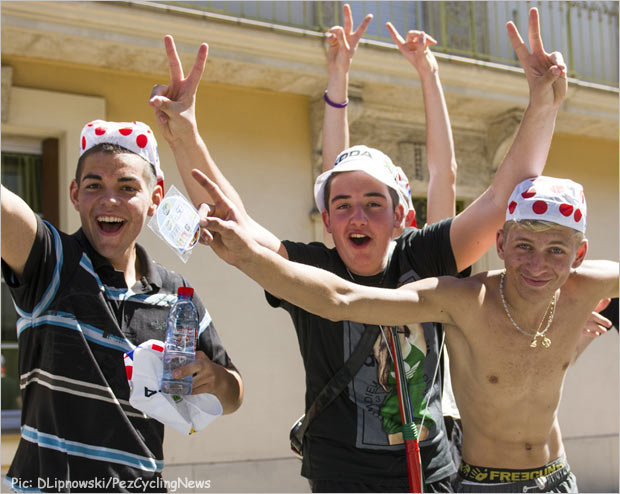 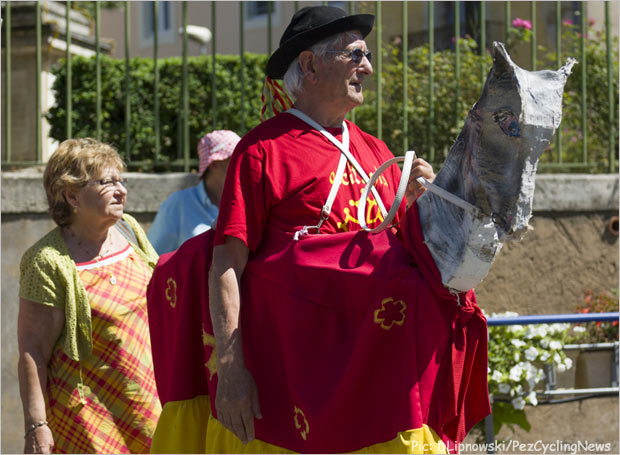 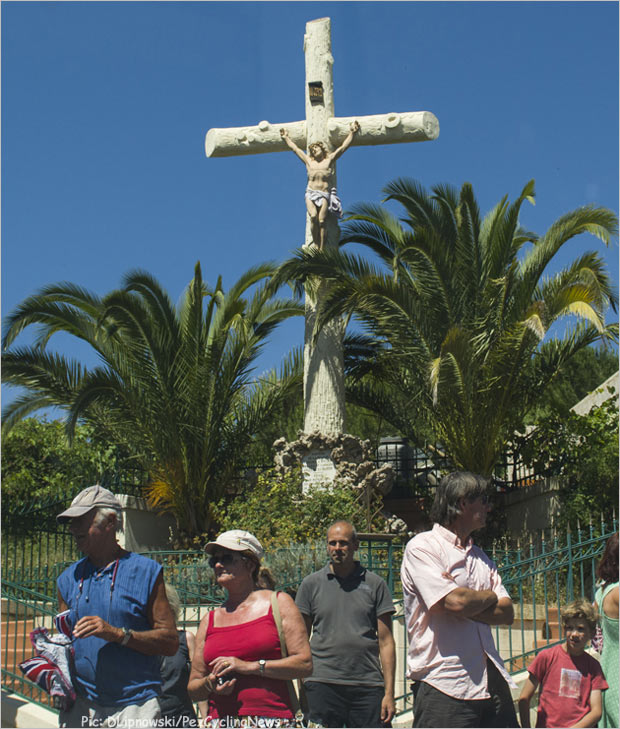 Even JC had a great view of the tour 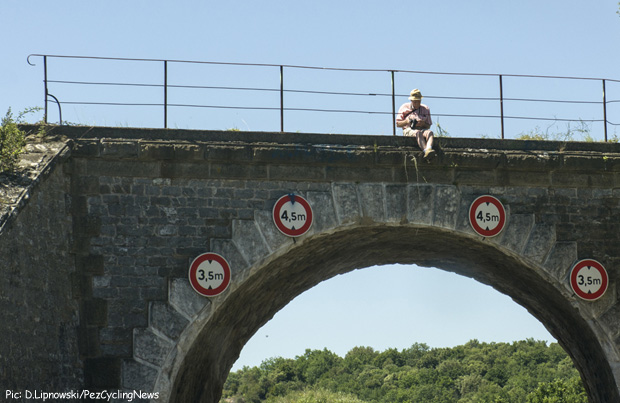 This fan has a sweet spot for photos, but a long wait in the scorching sun. 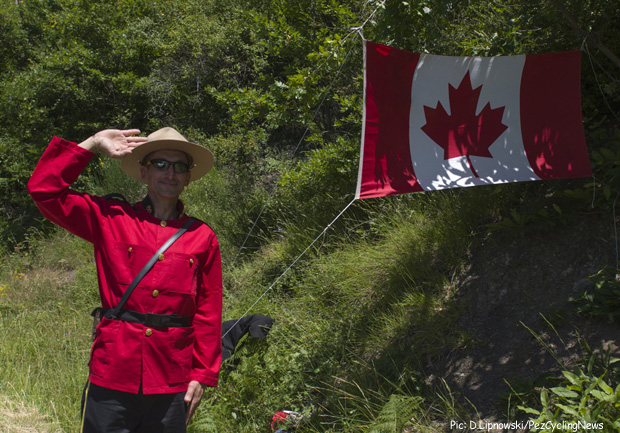 The Royal Canadian Mounted Police showed up to fly the flag along the Col. 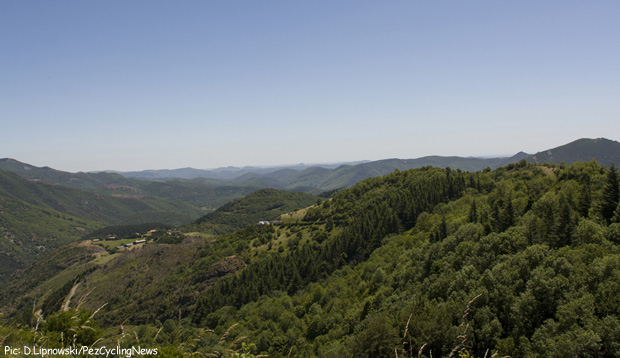 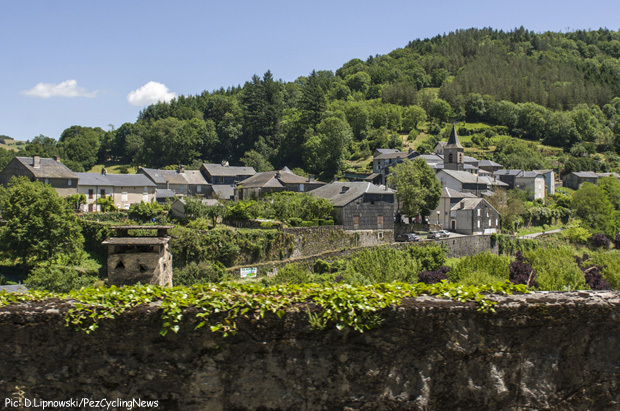 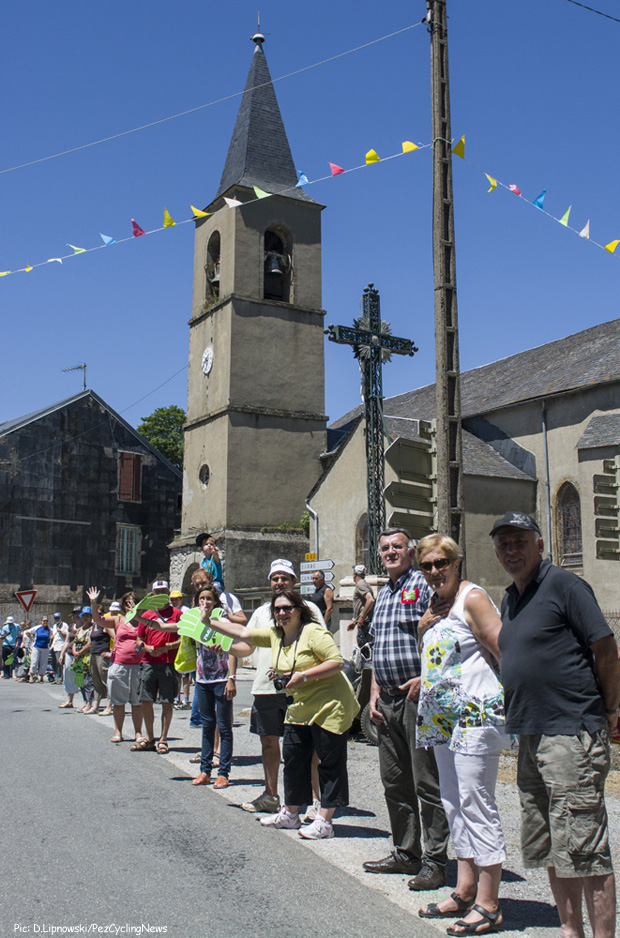 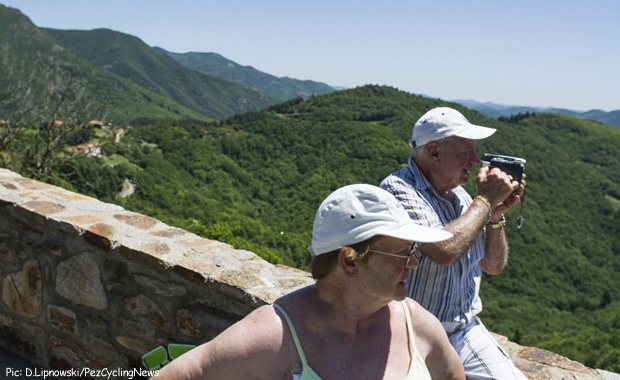 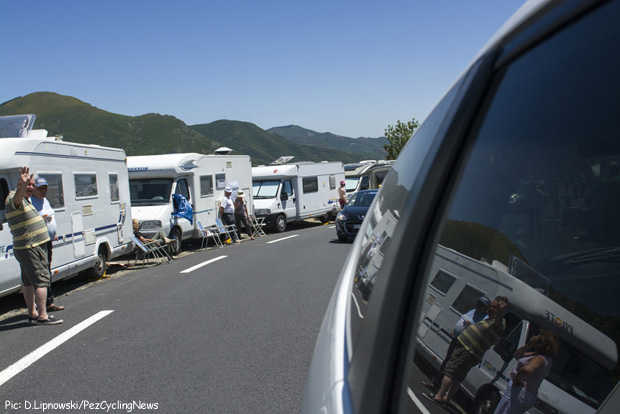 Views along the course.

Around 2pm, and 4.5 hours of driving, it didn’t look like there would be an opportunity to stop for lunch, so I broke into my snack stash. My lunches chasing the tour have not been anything to write home about so far, but little did I know that would soon change. Driving through small towns was the best part of the day today. The fans are so excited to see the big show, and wave to every single car that passes them by. What energy! At one point the crowd got really loud as we drove by, and I couldn’t quite figure out why. The reason was because a firetruck pulled up behind us, and the crowds were cheering for them. 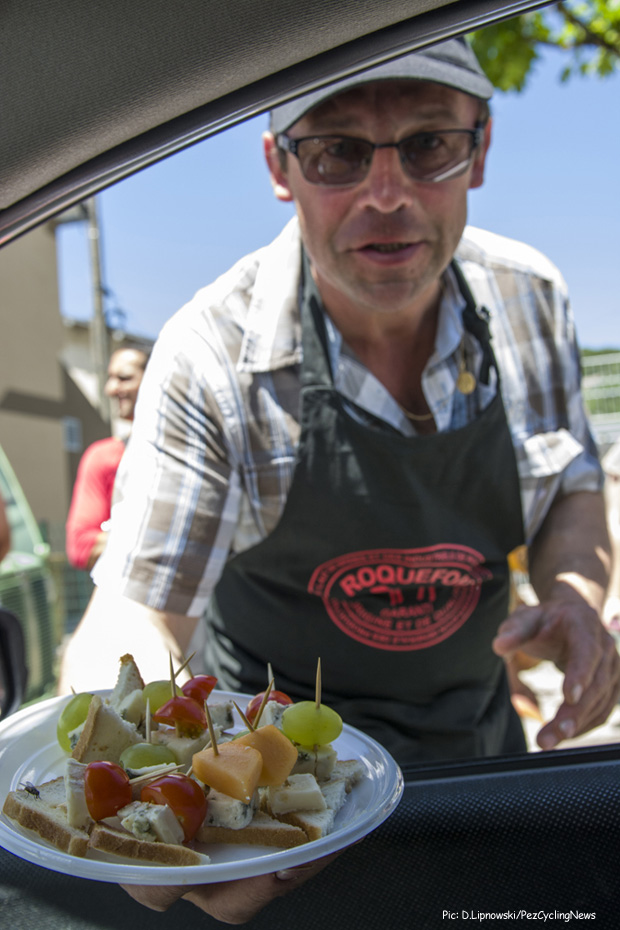 As we drove through the small town of Lacaune-Les-Bains, we were surrounded by amazing hospitality. As the caravan slowed down ahead of us, we came to a complete stop in the middle of the town. A man from a local cheese shop stuck a plate of the food through my window, and a lady offered my chauffeur a plate as well! I only wanted one, but he gave me the entire plate. I had a few pieces, and when the caravan slowed down a few kilometres later, I handed the plate out my window to some fans who were very appreciative of the plate. 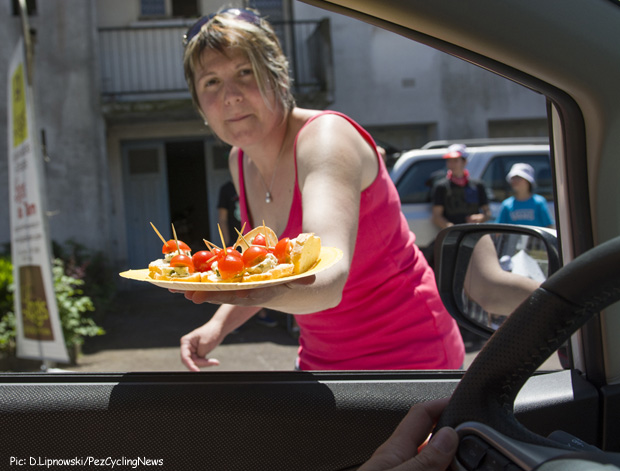 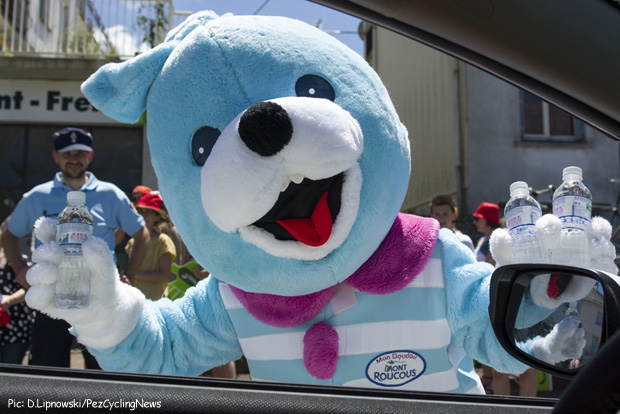 Surrounded by incredible hospitality in Lacaune-Les-Bains

It was quite an experience to drive through these hills. After we got off of the course, I took my turn driving towards the finish line, and I’ve never driven through such twisty turny roads through the mountains. It was a challenge doing it in a car, I can’t imagine the feeling of doing it in a race on a bicycle. The climbs seemed to go on forever today, and the downhill switchbacks were so tight. 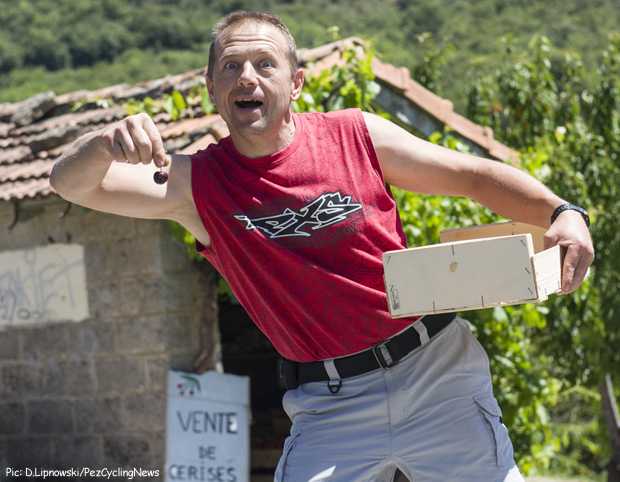 This man was selling cherries on the top of a hill, and tried to throw one through my window. He missed, and I think the cherry is still stuck on my windshield between the wipers.

After arriving at the finish area, there was not enough time to get to the finish line through the huge crowds, so I set myself up about 150M from the line. About 30 seconds before the sprint, a security guard moved everyone from the area, and I was completely blocked from seeing the race. I only took a few shots as the sprint started, and it’s not a great image, but one of the usable photos was Peter Sagan on the way to winning the stage. 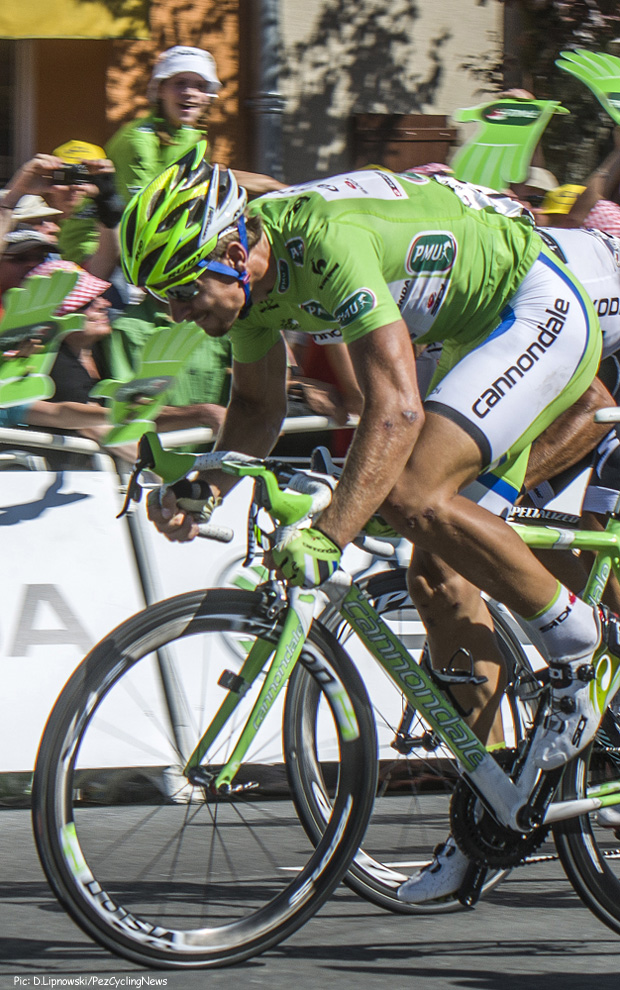 After the race ended it was quite chaotic, and I didn’t have an opportunity to find someone for my portrait a day project (the whole point of heading to the finish area). While waiting in line to check into the hotel, there were a group of rowdy Norwegians hanging out in the lobby with viking hats on. It turns out I saw them at the 2KM mark to the finish line, and Bjorn happily agreed to a portrait. Bjorn works in finance back in Norway, and is part of a group of 17 guys following the tour today, tomorrow and Sunday. They have a bus with a driver, and were having a great time drinking all day long. I asked the group of guys if they had specific rules for a Tour De France drinking game, and the group answered “no rules, just drink!”. 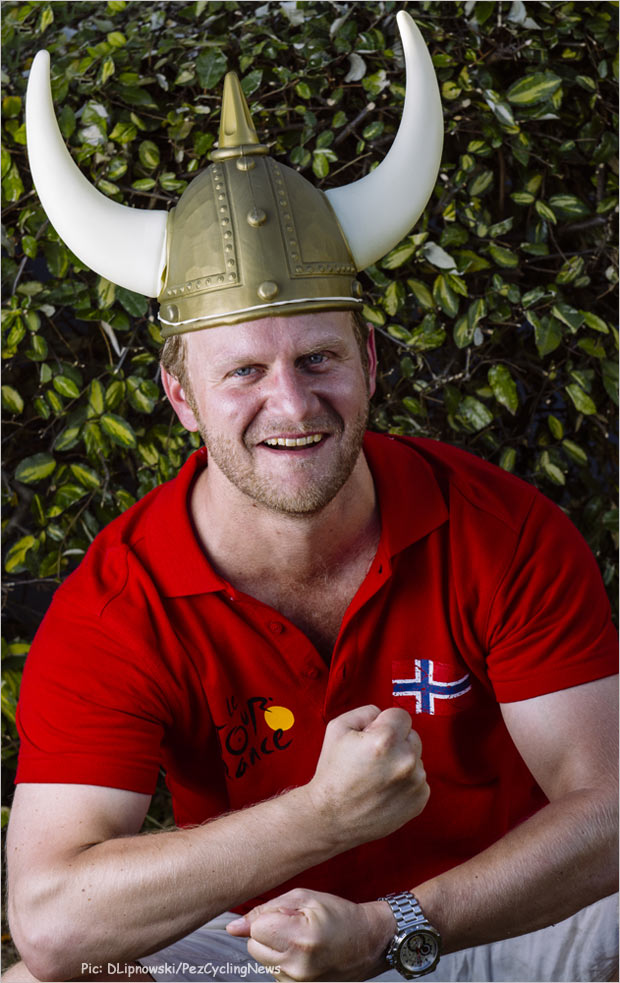 Thanks for reading and tune in tomorrow as the race hits the high mountains, and look for more on the PEZ Facebook page and the PEZ Twitter page.