Roadside St.9: Day #2 in the Pyrenees and the race just get tougher, with 5 high climbs enroute from St. Girons to Bagnères-de-Bigorre. The PEZ Roadside Crew went to the top of l’Hourquette d’Ancizan for a day with the fans. 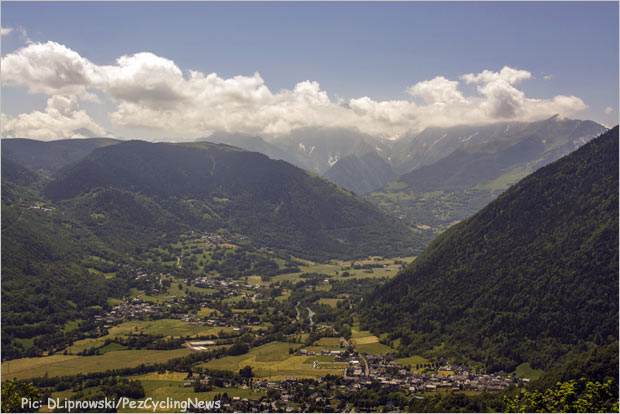 It was another big mountain day as the peloton hit the Pyrénées again. The day consisted of 5 climbs, with 4 of them being category 1. I decided to save some headaches and just drive the last big cat 1 climb, La Hourquette d’Ancizan. Driving the race course through the mountains has been extremely nerve racking. So many fans lining the side of the course don’t think about the fact that dozens if not hundreds of cars still drive up, despite it being closed to the public. People sleep on the actual course, and the cyclists that pre-ride the course generally take up the entire lane, making it difficult to manoeuvre around drunk stumbling fans, even in the mornings. 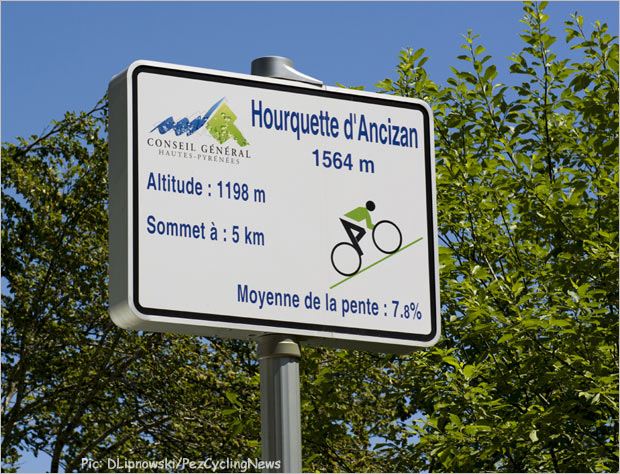 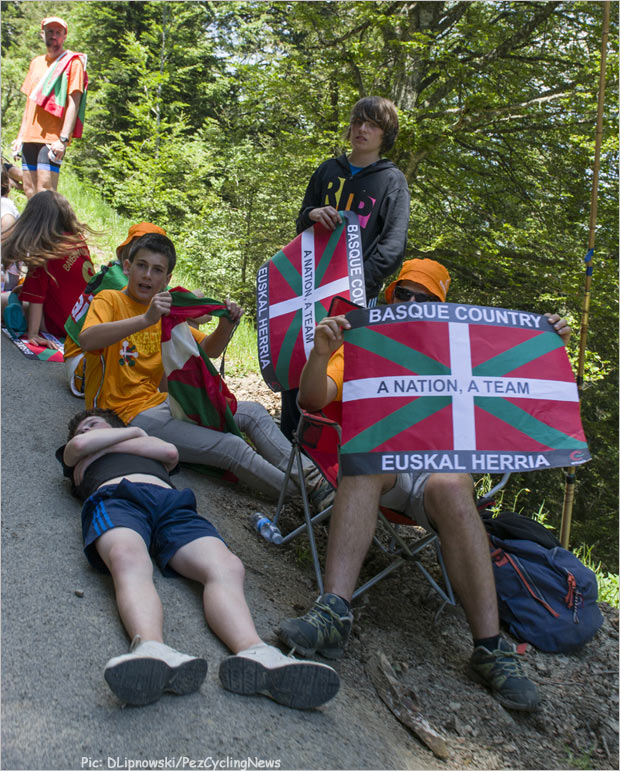 Not entirely sure the logic behind sleeping on the road, but many fans thought it was a good idea.

After parking the car at the top of La Hourquette d’Ancizan, the plan was to spend the afternoon there with the fans, and watch the race from atop the mountain. Though there were fans from all around the world at the top, there was a distinct Basque presence. It’s so great to hear so many languages of the fans’ native countries, and there was a lot of Spanish being spoken, and orange everywhere! Prior to the race coming through, there were many fans napping on the side of hills, having picnics, reading newspaper, or playing games. 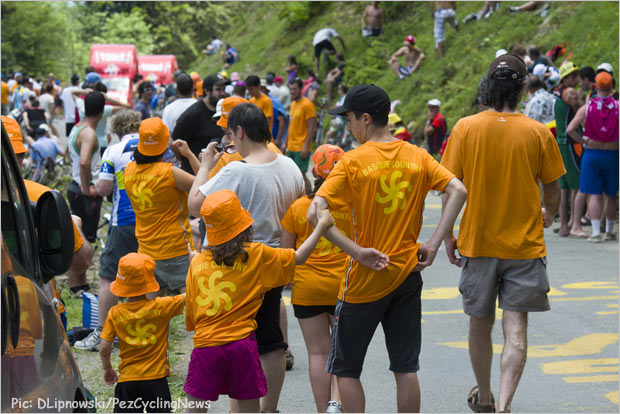 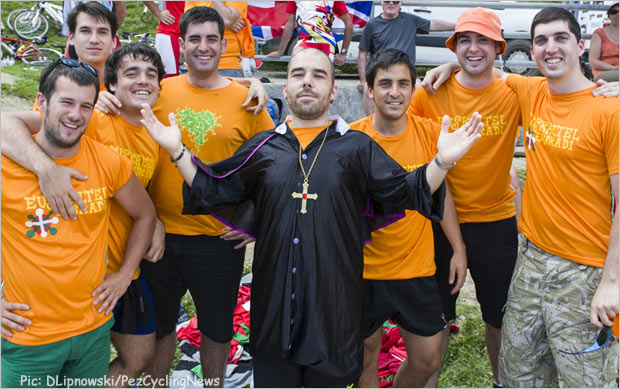 We are clearly in Basque Country now. 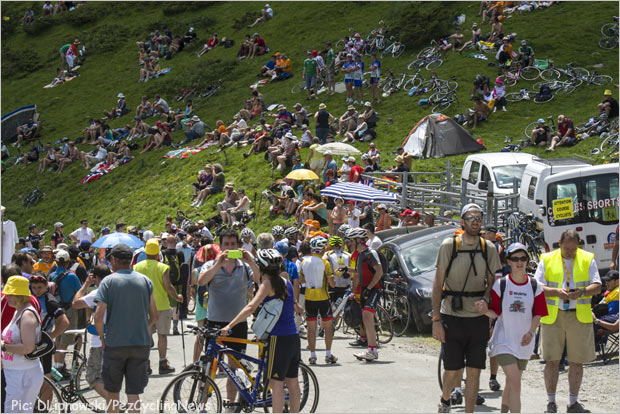 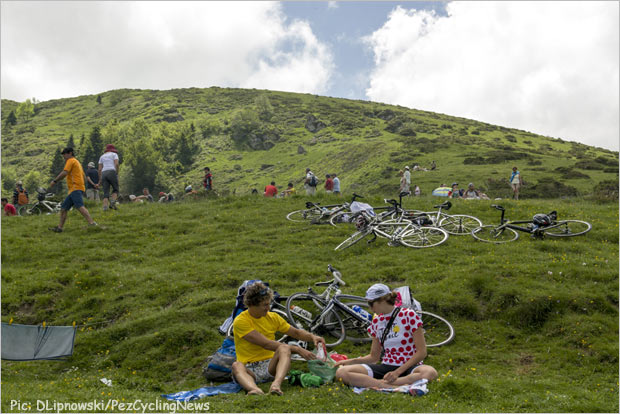 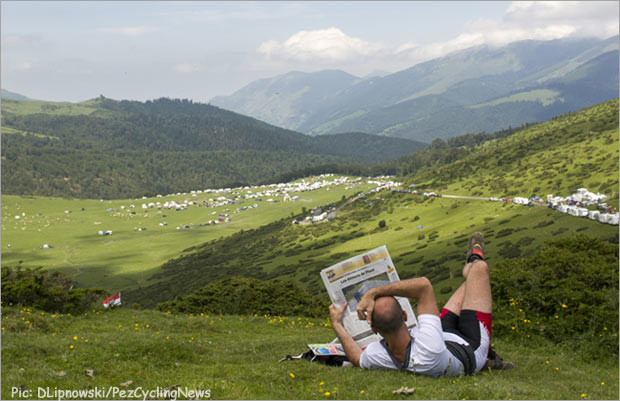 A nice stop to read the newspaper.

Many of the fans take their vacation time to party and follow the tour, with many people camping out along the route for several days in advance of the Tour coming through. One family told us that they have been in their spot for two days, and after the stage, they will be packing up and heading to the Alps to find another prime location.

I spent most of the day in one spot waiting for the Tour, to guarantee that I had a good view of the race. It was mostly refreshingly cool at the top, and I talked to the fans around me, and had lunch in the same spot, and a lot of the photos are pretty similar as they are almost all taken walking up, or on the top of La Hourquette d’Ancizan. It is truly a beautiful spot to be, and I can’t believe some of the stunning places in France that I’ve peed atop thus far in the 100th edition of Le Tour. 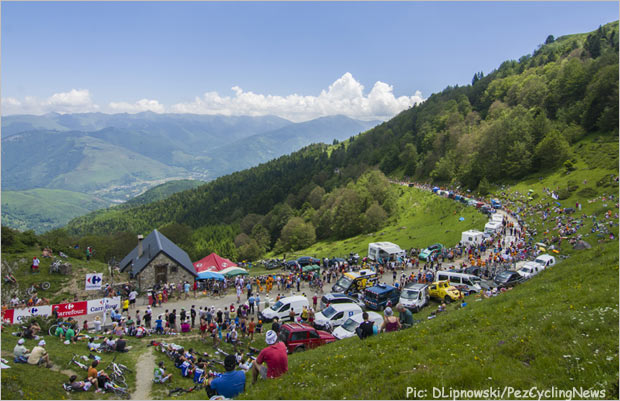 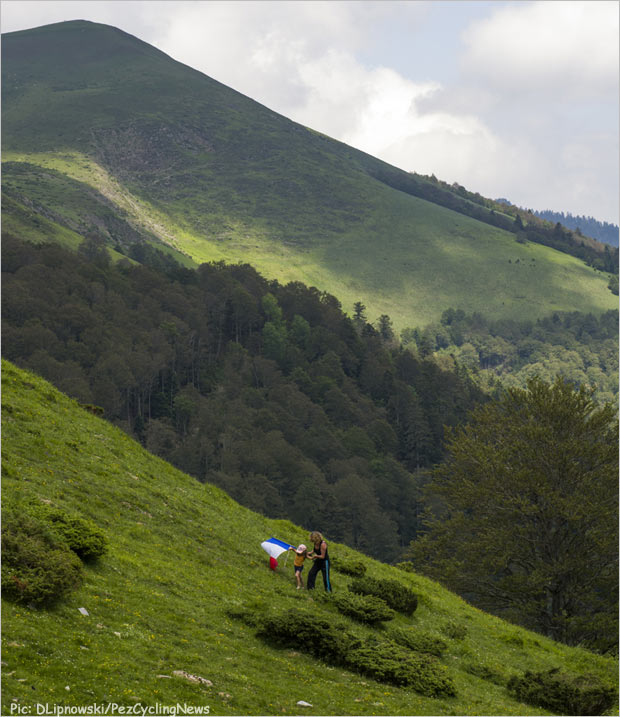 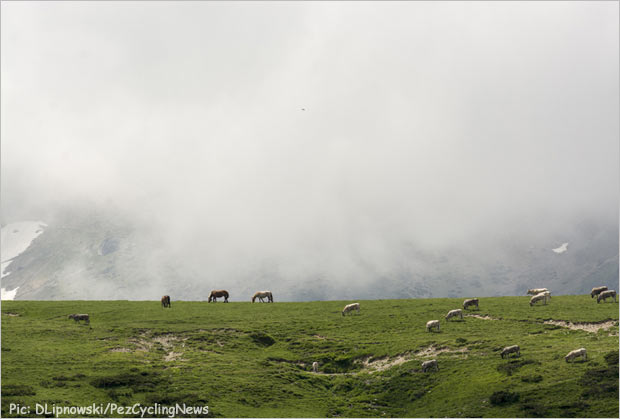 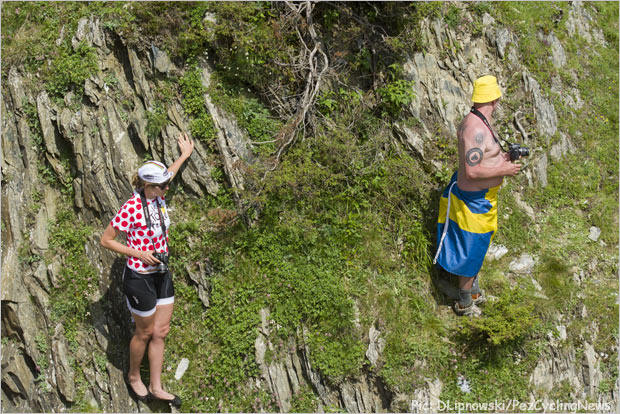 A bit of a hike up another hill, but quite the view. 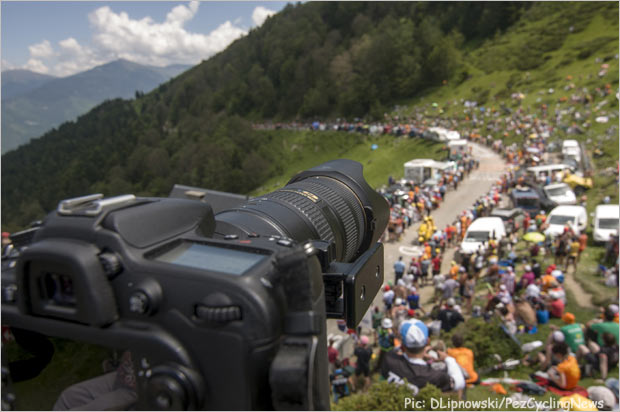 Set up for Le Tour to roll through.

When the race finally came by, I saw Garmin-Sharp’s Daniel Martin leading Astana’s Jakob Fuglsang, with a bigger group containing race leader Chris Froome in yellow a few moments later. Like yesterday Froome seemed to be a good spot in third position, but what was so surprising was that he didn’t have any SKY team members in sight. 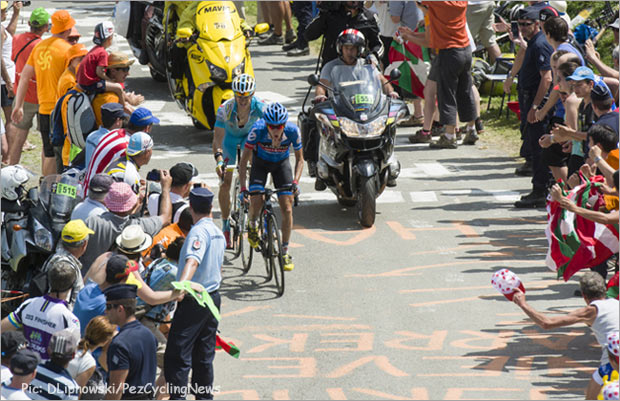 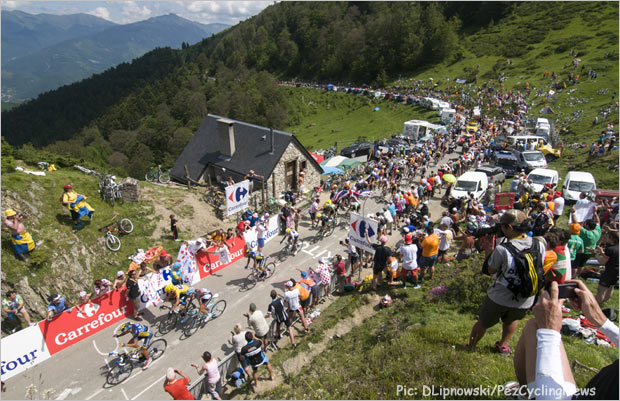 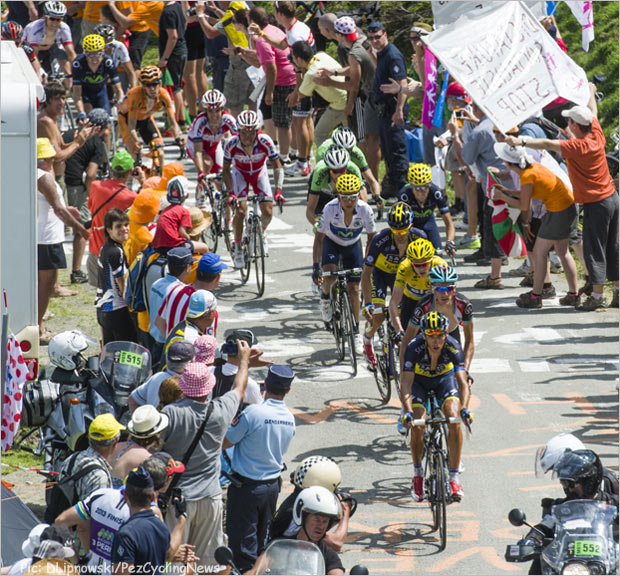 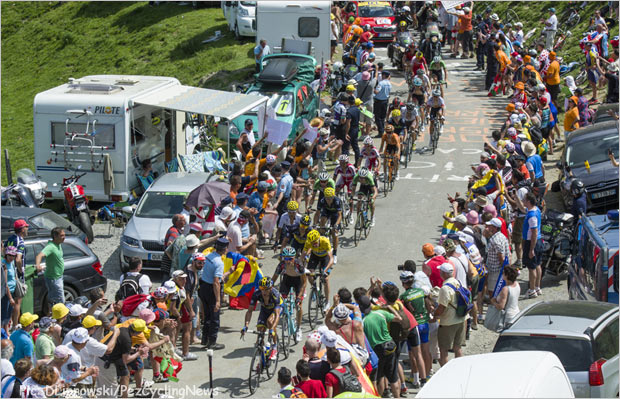 Froome in third, with no other SKY riders in sight. 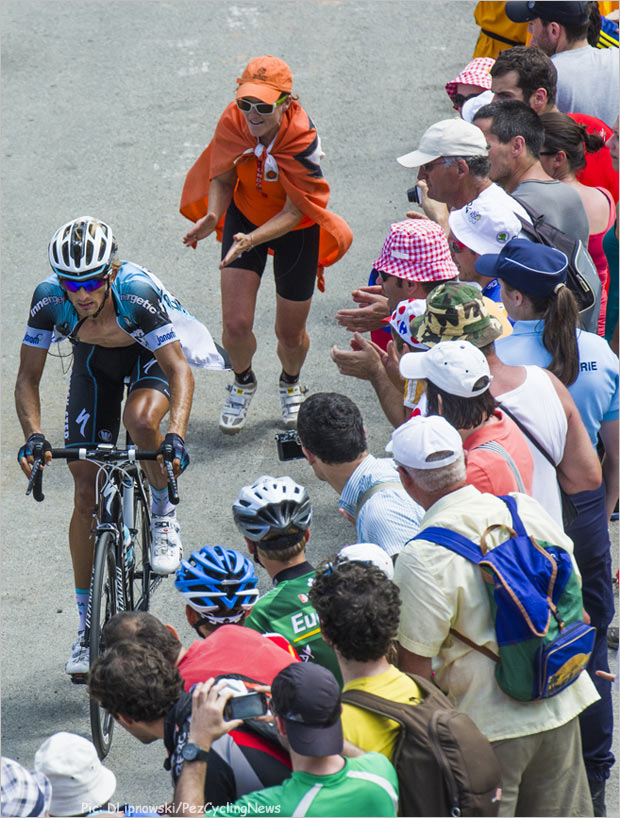 The Gendarmes didn’t allow any funny business, and this was the only fan I saw that chased after the riders. 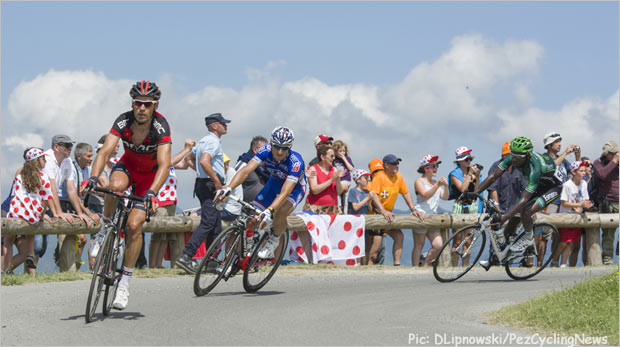 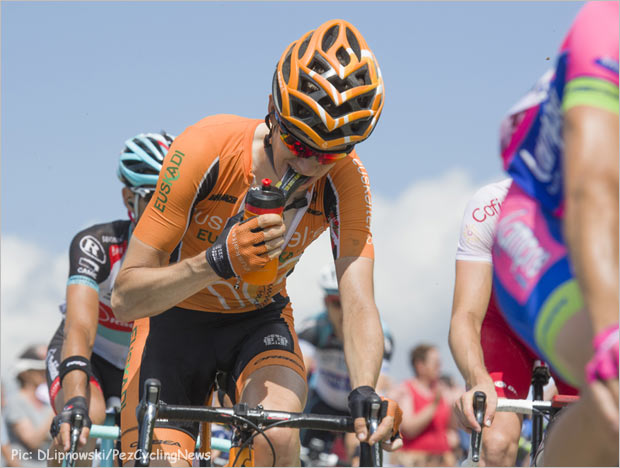 This turn starts the descent into Bagnères-de-Bigorre, which means a quick snack.

Having not been able to find anyone distinctive for my daily portrait, I asked a woman flying the Stars & Stripes atop a camper if I could take a photo of her. She was waving a Houston Texas flag as the cyclists passed underneath her, and when not waving the flag, she was relaxing on an inflatable pool chair on the roof her camper van. 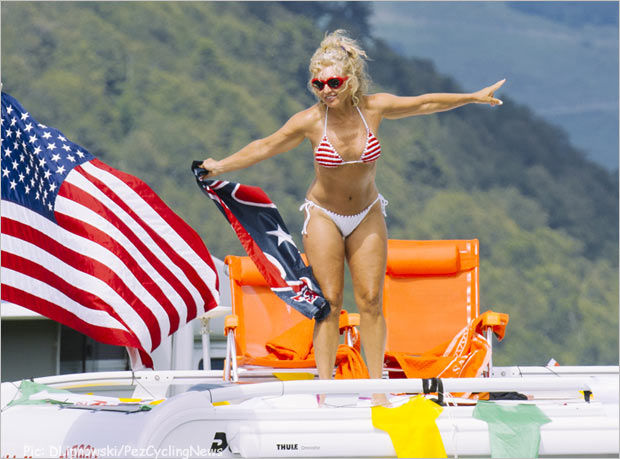 Driving back to Bagnères-de-Bigorre was a nightmare. The police were trying their best to keep media cars, and other tour vehicles 20 minutes behind the last rider, with the public being allowed on the road about 30 minutes after the last rider. This would have been a great plan, but many cars snuck on the road before even the last rider (it looked to be a SKY team member) could get down the mountain safely. The roads were a complete mess as the Gendarmes tried to sort official vehicles with the public. All the while, hundreds of cyclists that were on the side of the mountain watching the race were now hurling downhill at break neck speeds taking both lanes of the roadway, with no care that they were riding into oncoming traffic. At a stop light, one car pulled up to the police to ask them for directions while the light was green. When they were finished talking the light had turned to red, and they decided to go through anyway. We pulled our car up, and the Police told us that because it is the Tour De France (and that it was an older driver), they don’t care about enforcing the law.

Tomorrow might be a rest day for the cyclists, but I’ll be driving 700KM due North, so we’ll be back with our next Roadside Report on Tuesday… see you then.

Thanks for reading and tune in tomorrow for Lee Rodgers’ Tour Lowdown from the high mountains, and look for more on the PEZ Facebook page and the PEZ Twitter page.