Roadside St.20: The 2014 Tour de France’s only time trial was a long 54km last chance for riders hoping to climb or defend the gc positions. But getting there is half the fun, so PEZ spent the morning down in Bergerac checking out the latest tt rigs before heading onto the parcours.

The crowd has stirred from it’s humid Saturday afternoon torpor – they know who’s not so far away. 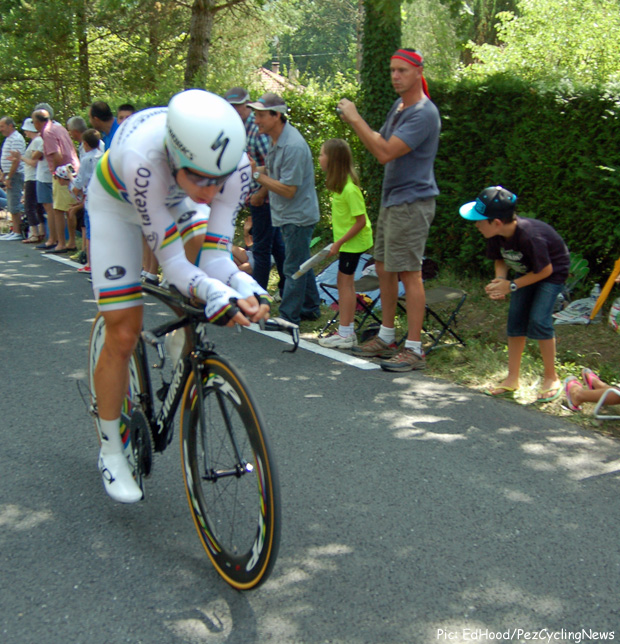 Yes, Tony Martin is flying, not in a spectacular way like the previous leader on our watch, Jan Barta (NetApp & Czech Republic) who was out of the saddle pumping the pedals, his Fuji swaying, tyres rasping on the tar, his mouth open and gasping for air. 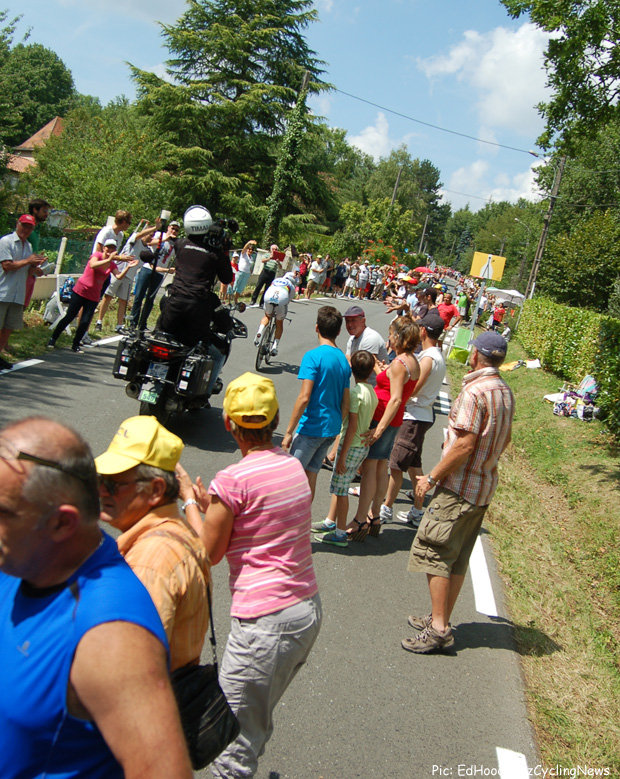 No, Tony sits solid, arrow straight despite the gradient, he’s firmly in the saddle, those saddle grippers we were looking at back in Bergerac doing their job. 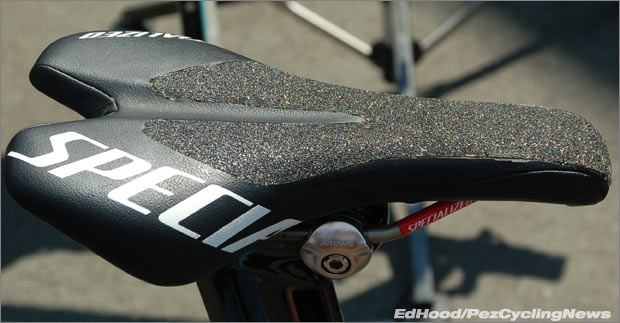 Focused, smooth, powerful; the consummate ‘chrono man’ – but that’s why he wears the rainbow jersey. He’s past and gone in seconds visibly faster than anyone else and has caught four riders – at two minute intervals. 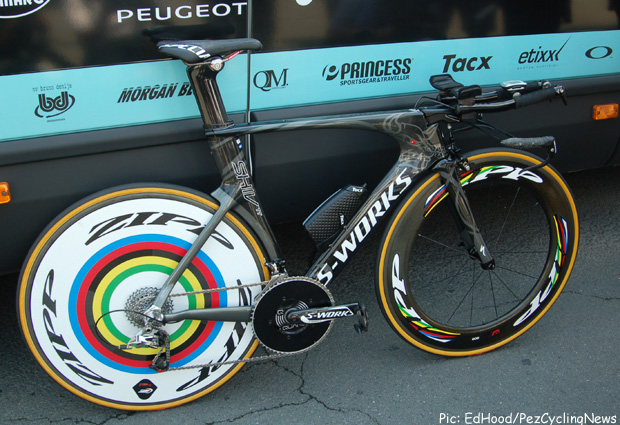 The gear is big, we were checking his new Specialized Shiv race bike at the start and whilst he’s on his habitual 58 ring he’s riding a wide ratio cassette with what looks like a 28 or 29 bottom sprocket. His SRAM rear mech is the long cage version so as he can ride the 58 with the big sprockets and not have to risk front changes. 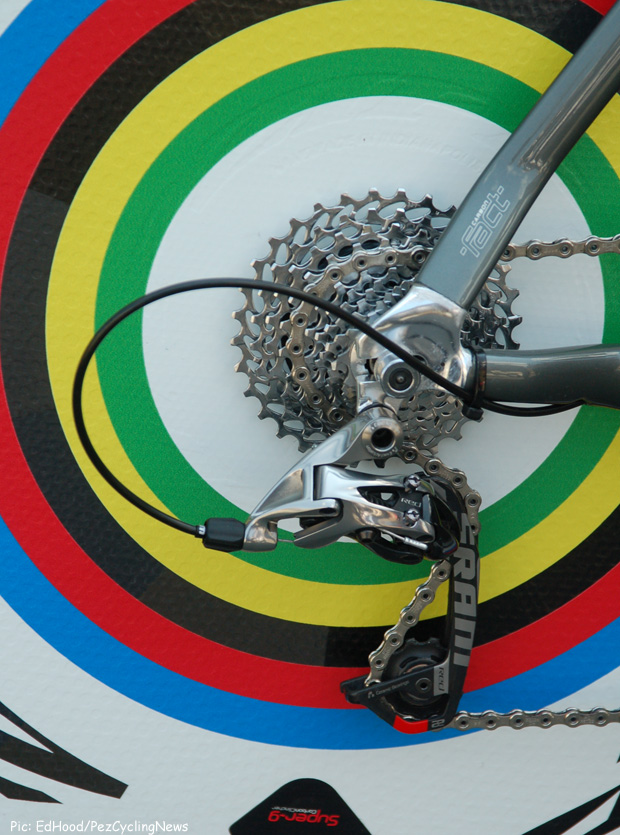 He won the stage, of course – no surprises there. We spent the morning down in Bergerac checking out the hardware – Tony’s included – before we headed out on the parcours.

And there was the added attraction today of Bianchi launching their new Aquila CV time trial bike. The days of taking of the inner chain ring and stripping the ‘bar tape back to the brake levers have gone. Time trial bikes – which are also used in triathlons – are big business. Every major manufacturer now has a time trial machine on offer. 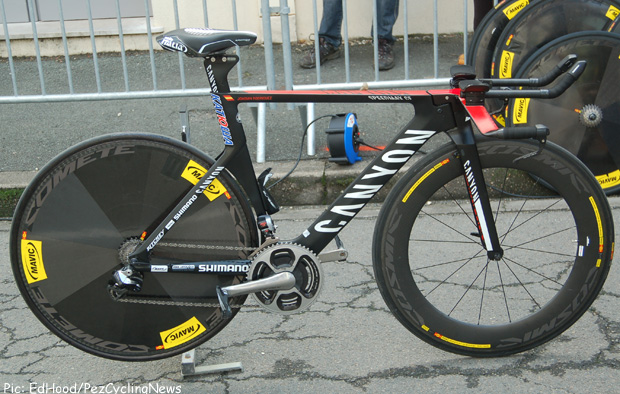 In fairness to them the logic of having as slippery a bike as possible when you’re ‘alone and unpaced’ is solid. In a peloton the air is churning, ‘dirty’ – but when it’s just one man, the road and the wind then it makes sense to try and save every watt on as slippery a machine as possible. 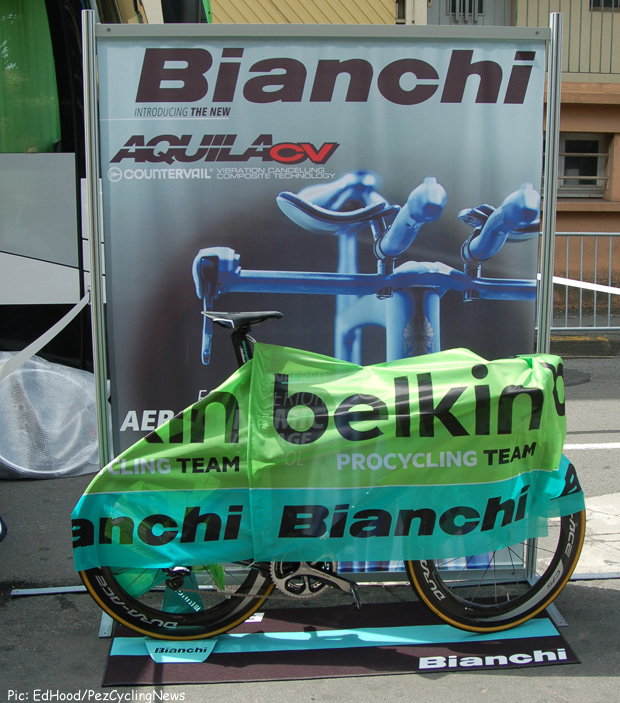 When we first passed the Bianchi Aquila, it was under wraps so we went off to make a nuisance of ourselves around the busses.

The time trial frame as a species has evolved to a point where there are marked similarities across the board. Perhaps one of the most obvious is the fact that most of the top TT frames now have ‘mini’ rear triangles with the seat stays coming in way down the seat tube in the interests of minimising the surface area presented to the turbulence off the rear wheel.

Tucking that rear wheel in tight to the back of the seat tube another box to tick.

Integrated bars/stem/steerer are a must and the smoother the lines here, the better – this area and the front wheel are what meet the air first. 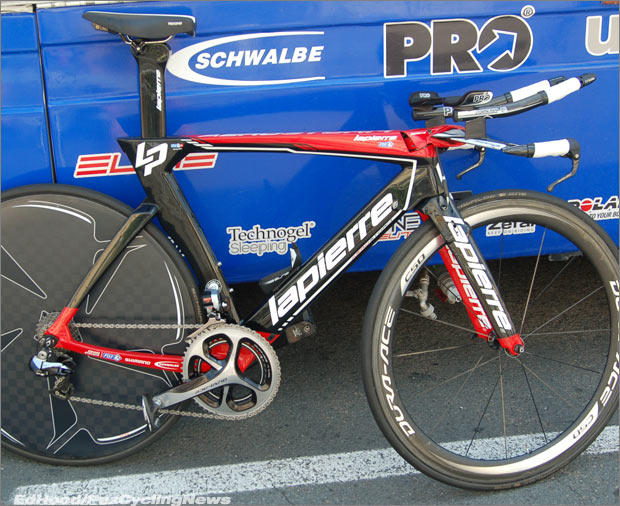 But within this framework there are different ideas at work.

Take brakes: despite Pascal Ducrot at Scott telling us a few years ago that it doesn’t make much difference where you locate the front brake, most manufacturers – including Scott – now have brakes which are integral to the forks, either behind or within the fork blades.

Some manufacturer’s set ups seem against the spirit of the UCI regulations as they would appear to constitute fairings. 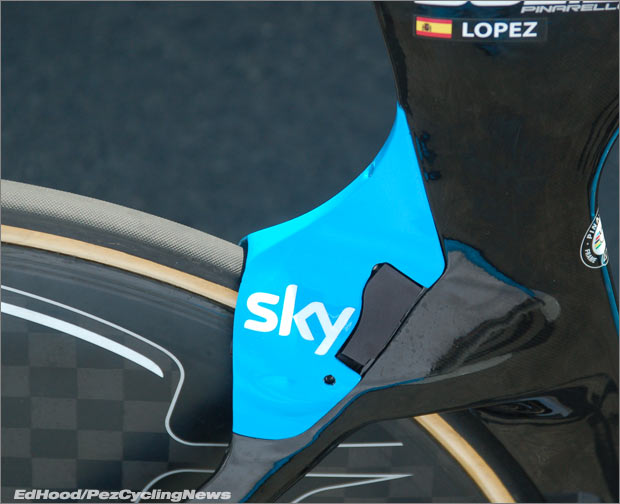 This is particularly true on the Pinarello Bolide where front and rear brakes are ‘cowled’ – but these days you don’t tool up to manufacture a new mould unless you’ve checked very carefully with the UCI that it complies. 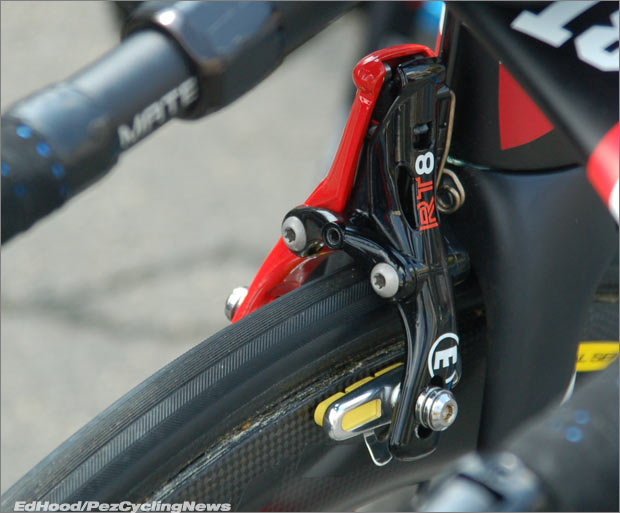 The tiny rear triangles force the rear brake down under the bracket where it’s out of the wind but catching every bit of dirt there is.

Saddles get ever shorter in order to comply with the ‘behind the bottom bracket centre line’ part of the regs and make sure there are no shocks when your mechanic presents your machine to the UCI guys on the start line with their nasty and rigid jig. If your bike don’t fit, you don’t ride. 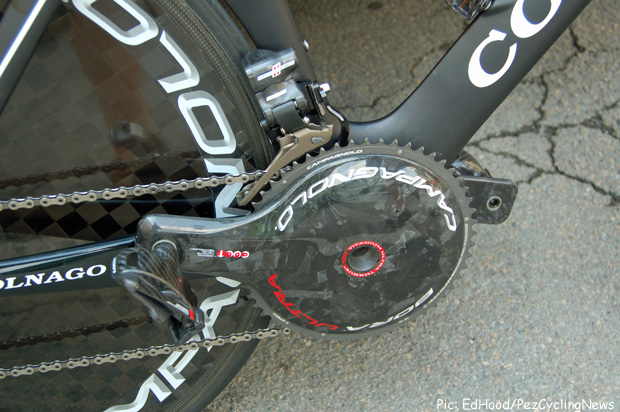 Chainsets have gone space age; ‘solid’ Shimano rings are ‘old hat’ – both Campagnolo and Vision have ‘bulbous’ drive side cranks on offer to smooth air flow.

And despite the optimum design of machine becoming ever closer, new ideas still crop up. Take front forks; for years we all knew that you had to keep the blades as tight to the front wheel as possible – wrong ! 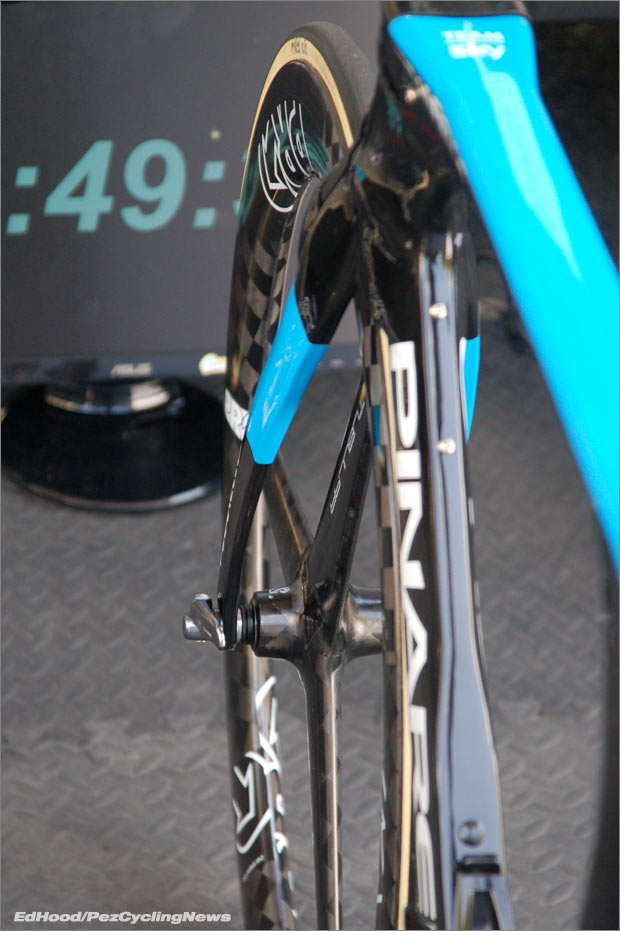 Felt and Pinarello both have gone the other way and a skinny front wheel now sits between a wide ‘horseshoe’ of a fork to let air flow through and avoid turbulence.

And with rims and tyres you wanted the rim as narrow as possible – wrong again. The fast composite wheel rims now – in a trend Zipp started – are wider than the tyre, again to improve airflow and reduce turbulence.

By the time we’d worked the team buses, the wraps were off the Aquila. 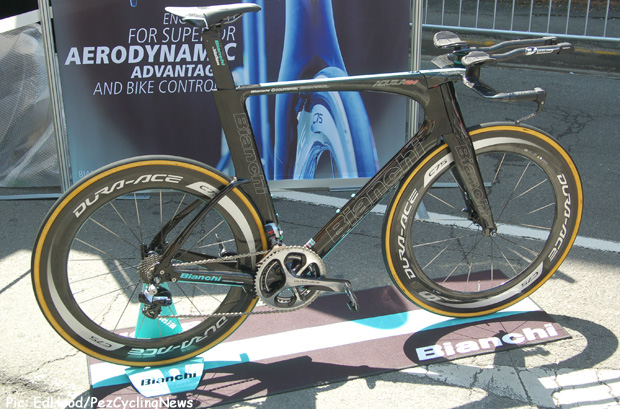 It’s a thing of beauty with the smoothest imaginable lines. 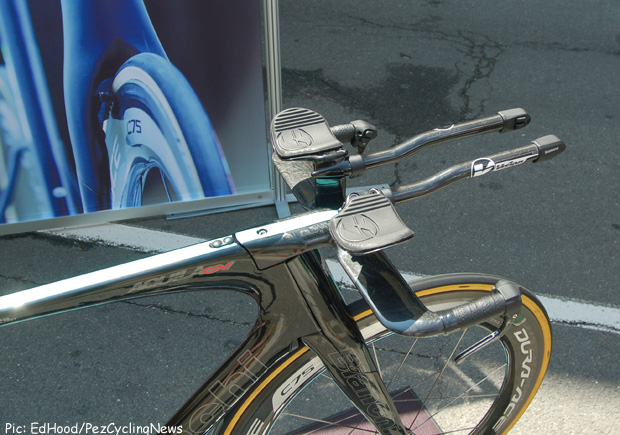 The steerer/stem/bar arrangement is very ‘clean’ and the front brake is invisible behind a UCI legal cowl. The Shimano Di2 controller is in there too with the battery in the seat pin. One look at it makes an old man want to ride time trials, again. 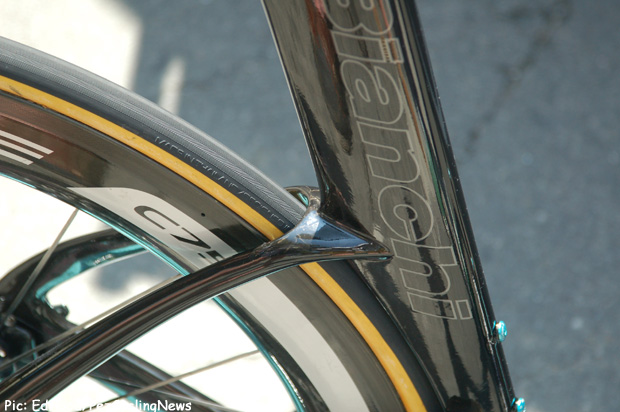 Bianchi reckon it’s the best wind cheater out there and visually it’s hard to see how the machine could look much sleeker. But there comes a time when all this tech has to hit the road out there in the Dordogne heat.

We passed GreenEdge man Simon Clarke warming up and headed for the car. 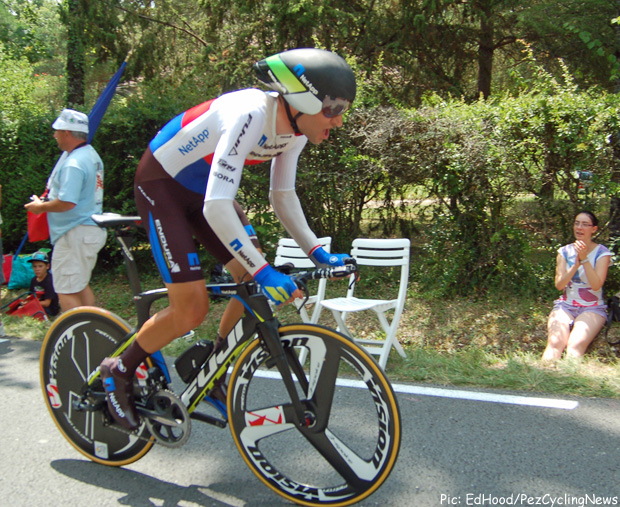 The first man to impress us was Czech chrono champ, Jan Barta who ripped up the climb for an eventual excellent third. 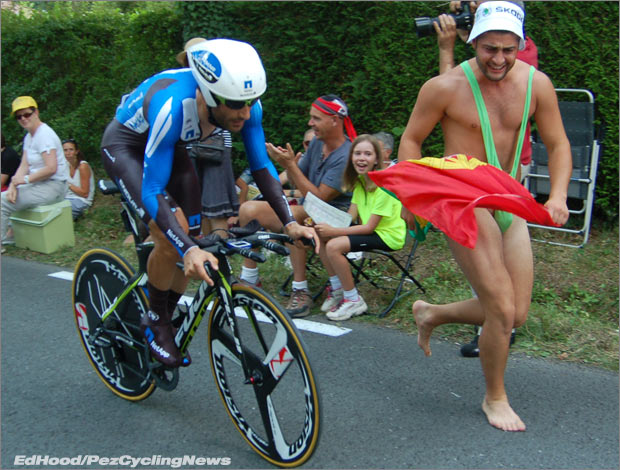 But we also saw his Portuguese team mate Tiago Machado have the distraction of a near naked idiot running alongside him. 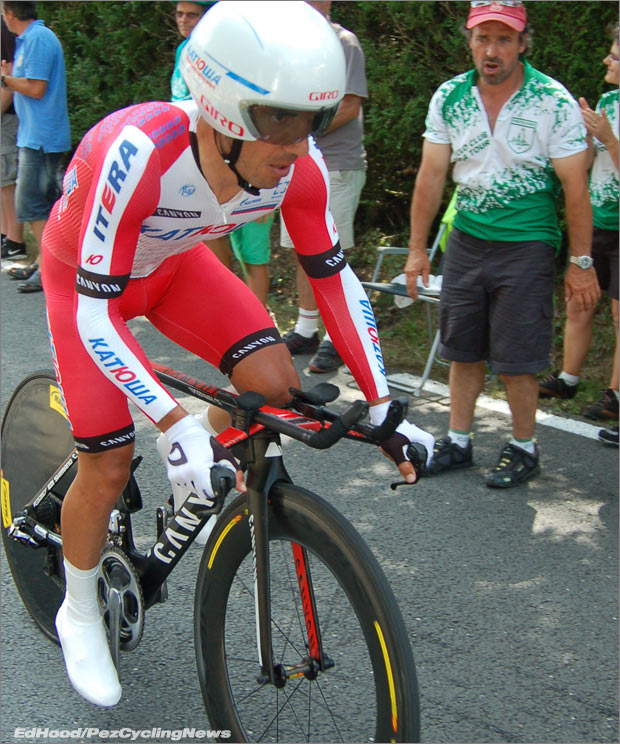 Joaquin Rodriguez isn’t a man for the chrono and it showed as he went through the motions. 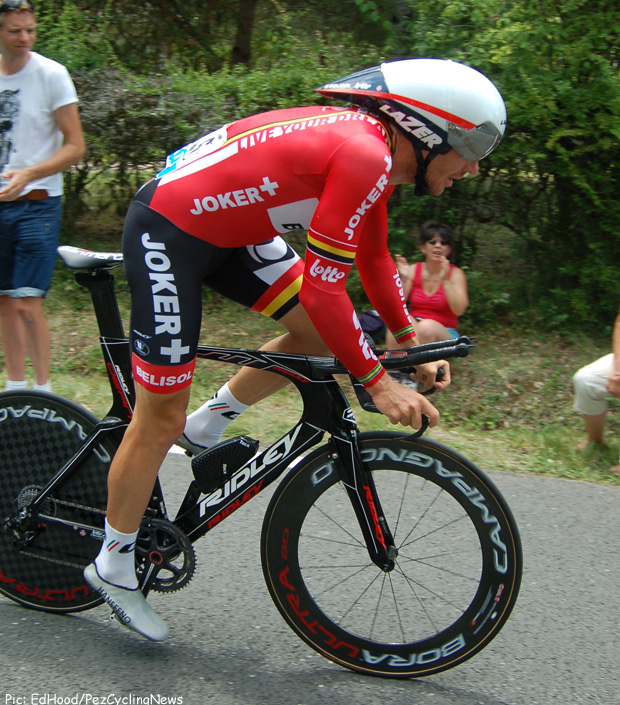 Big Aussie former National Time Trial Champion, Adam Hansen looked the part but must be tired after so much work for Van Den Broeck and Greipel. 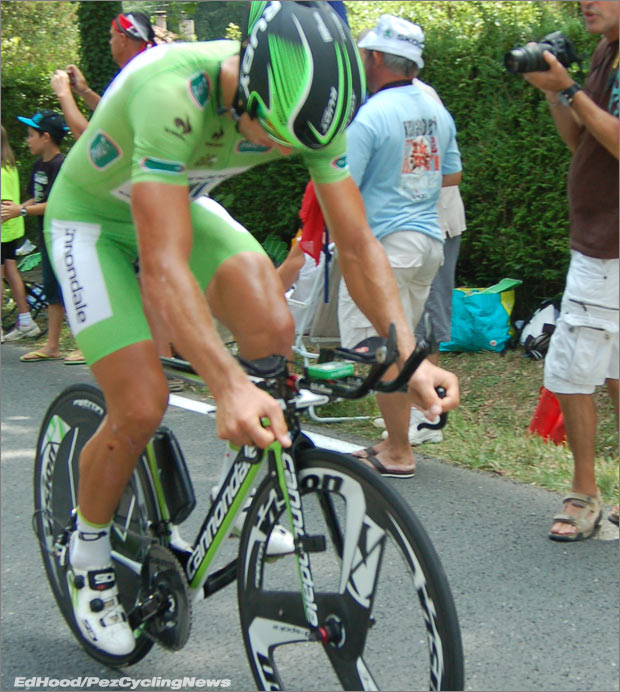 But ‘The Wolverine’ wasn’t having a good day in the forest – tomorrow will be different for him on those cobbles, maybe.

And on the subject of gay Paris, we had to leave station and head north – it’s a long way to the City of Light and we had deadlines to meet on the way. We’ll wax lyrical about two Frenchmen on the podium, tomorrow.

Bennati: I will try on Champs-Élysées