Race Preview: The 16th Santos Tour Down Under runs from Sunday 19th January through Sunday 26th, and the toughest course design yet features a pre-race criterium and 6 stages in and around the Adelaide area. It’s a World Tour event and features some big riders, and high temps.

Contributed by David Hunter
Australia’s summer is the perfect start to a pro cycling season that still sees much of the Northern hemishpere frozen in, and trainer-bound. It’s been months since the road season ended and we’re starved for racing – and this pent-up desire couldn’t be better for the Tour Down Under, as the official kick-off for the 2014 season’s WorldTour calendar. 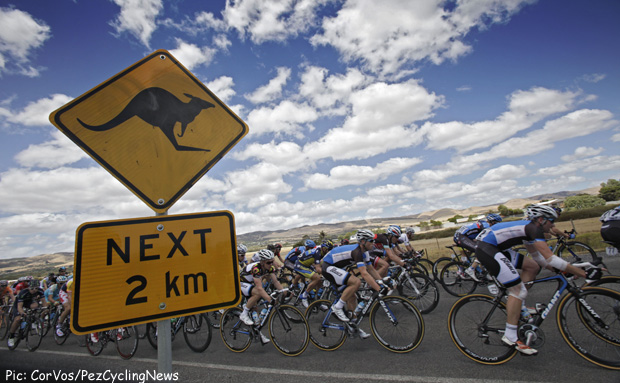 It’s the 16th TDU and the hardest yet.

While much of the ProTour peloton is there (and another batch racing at San Luis in Argentina), the big boys will be just warming up for bigger prizes like the Spring Classics and the Grand Tours, so the racing is wide open and opportunities abound for lesser known riders like 2013 winner Tom-Jelte Slagter (who will not be defending his title, as his wife is due to give birth to their first child). And don’t forget that Alberto Contador once won this race so it’s a greta place to spot future stars too.

The pre-race criterium is better known as the People’s Choice Classic, while the rest of the stages are officially the Tour Down Under, and with 40 degree heat, it promises to be a challenging race.

In terms of the GC, stages 3 and 5 are crucial. I would also expect to see some clever riders try to pick up bonus seconds, along the way. We have some big names riding this year and many Aussies: Cadel Evans, Richie Porte, Simon Gerrans, Rory Sutherland and Rohan Dennis. The other contenders should be Westra, Moreno, Bakelants, Gesink, Ulissi and Frank Schleck.

Off The Front
When trying to pick the winner you also have to remember the nature of the climbs, short and punchy. The winner will have to win a stage, so it needs to be a rider suited to this type of climb. I think that rules out Porte, despite his talent, and could bring Geraint Thomas into the picture. He was very unlucky in 2013, just failing at the end of Willunga Hill, but with a stronger team, he could hold on. 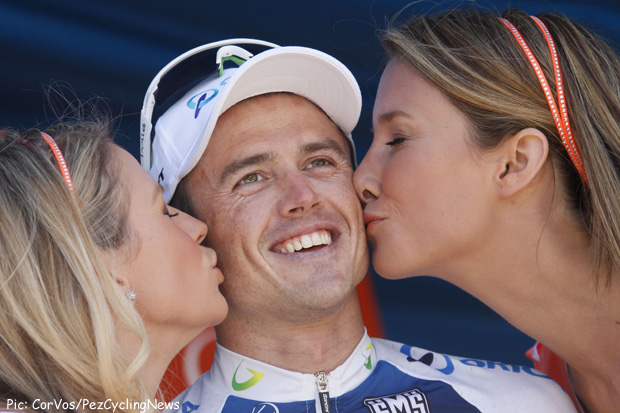 Simon Gerrans took the spoils on Willunga last year – can he repeat this year?

Simon Gerrans has to be the big favourite as the course is perfect for him. His big goal is the Ardennes Classics, but he looked in top form at the Aussie Road Race. Last year, his asthma destroyed his chances of the GC, but he did win up Willunga Hill. The race has twice finished at the top of Willunga. Gerrans was a very close 2nd to Valverde in 2012 and won in 2013. It is his perfect finish. To beat him, the other teams will have to attack on Corkscrew Road and try to unsettle Orica.

Rohan Dennis has made this a big goal. He’s trained to peak for this race, but crashed during the Australian TT championship. He didn’t break any bones, but these things can stop a rider from being at 100%. He raced the Australian road race, but didn’t finish it. Remember that in 2012 he did the race with Team Jayco-AIS, finishing 5th and winning the KOM jersey and young rider classification. That year, he was 5th on Willunga, after being in a break for a good distance. He has the ability to stay with Gerrans, but has he fully recovered from his TT crash? 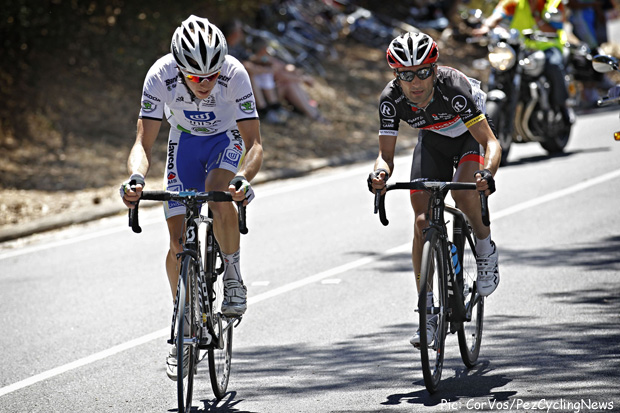 Dennis at the 2012 TDU riding for Uni SA

Cadel Evans is focused on winning the Giro. He’ll probably go top 5, but I can’t see him beating Gerrans on Willunga.

Javier Moreno should go well, after finishing 2nd in 2013 and 8th in 2012. In 2012, despite drilling the climb for Valverde, he finished 8th on Willunga and was 3rd in 2013. He is always in good condition, at this race, and is a massive threat to all those that want an Aussie win.

So that makes Gerrans, Dennis, Porte, Evans, Thomas and Moreno as threats. The only other rider, who can challenge them is Jan Bakelants. After a wonderful 2013, will he be in condition so early in 2014? If he is, he’ll be dangerous.

I would think that the other big name riders will be looking to get extra miles into their legs and won’t threaten the GC, but could win a stage.

It isn’t all about the GC as we have an amazing group of sprinters here: Greipel, Viviani, Soupe, Von Hoff, Ferrari, Lobato, Renshaw, Goss, Matthews, Kittel, Danny Van Poppel and Ewan. Some of these guys will only be around for stages 4 and 6, but some will be in the action on stages 1 and 2, as well. 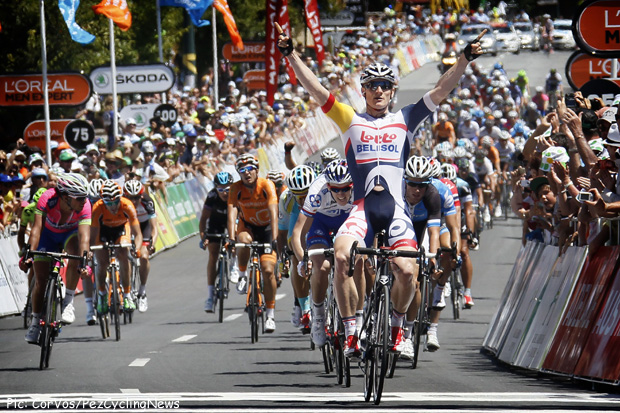 Andre “The Gorilla” Greipel, has won 14 stages in the Tour Down Under. He is usually in great, early condition and will be keen to add to his total. The sprinters get an early chance in the pre-race crit, which is on Sunday 19 January.

Watch out for young Caleb Ewan, who will be trying to make a mark in his first big race. He’s 19 years old and is the next big star of sprinting. He’ll be riding for Uni-SA, although he joins Orica GreenEDGE, later this year.

Stage 1 looks okay, but we have Mengler’s Hill, with just 14km remaining. This is a tough, short climb, with some very steep sections. The opening 2.4km climbs at an average of 7%, with sections of 10 and 11%. It will be enough to finish off many sprinters, but we’ll still get a bunch sprint, but not with the full peloton.

Stage 2 returns to the popular destination of Stirling. It featured for the first time in 2009 and we’ve been back every year since. It features a long drag of a climb, around 8km, and usually ends in a small bunch sprint. Winners of the stage pick up a handy bonus and Tom Slagter took this stage, en route to the GC, in 2013.

Stage 3 takes us back to Corkscrew Road, after a successful first appearance in 2013. This day will play a part in shaping the GC, as a small group will probably escape. No one will win the title today, but we’ll know who won’t win it. The last 2.5km of the climb is at an average of 8%.

Stage 5 finishes on Willunga Hill and will determine the GC. It is a short, punchy climb and look for riders that favour this type of finish. The climb is 3.5km at an average of 7%, but with ramps of 16%. To win the GC, you’ll have to be in the top 3 here.

Stage 6 is another for the sprinters, with a circuit in Adelaide.