Race Analysis: Lee Rodgers casts his eye over the 2014 Tour de France’s stars & action, the good, the bad and the ugly. It turned out to be a very different Tour from the one predicted three weeks ago – was it an exciting Tour?

Well, that Tour de France sucked. Talk about a letdown.

What happened to the usual narrative we’ve grown accustomed to? Where were the mad, crazy and frankly un-credible feats of wonder we’ve been groomed to expect by the UCI and their grubby dope-o-philes over the past 20 years?

What happened to the French? How dare they suddenly turn up and start riding and supplying bucket loads of excitement and intrigue? Putain! And who’s this Nibali character, riding his heart out on the cobbles then going on to put in a such a sustained performance of elegant force that he truly shocked many onlookers?

Where was the usual pointless Grand Depart? Yorkshire? Yorkshire? The land of flat caps, puddings and dourness put on a show so impressive that many of the riders highlight the reception they got from the massive crowds that came to cheer them on as the best part of the Tour. 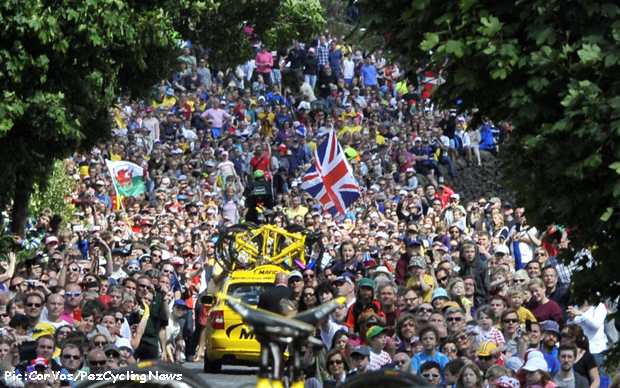 The Tour seemed popular in Yorkshire

The whole thing, from start to finish, had a billowing breath of fresh air flowing through it and that just will not do.

I am of course being sarcastic, and yet a quick look of the comments sections on certain cycling websites leaves me wondering what some people have been watching. The adjectives ‘dull’, ‘boring’ and ‘predictable’ keep popping up but in my opinion they are wholly unjustified.

I’ve said it before and I daresay I have to say it again; nobody wants to see a rider retired injured, certainly not with broken bones, but the departure of Froome and Contador reignited the interest in the great old race of many who had grown weary of it over the years. 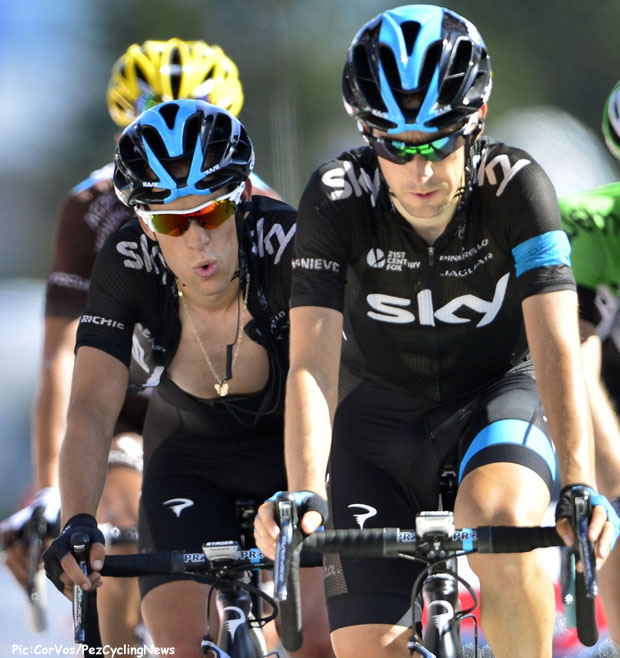 Not a good Tour for Sky and Richie Porte

Team Sky and Brailsford have a lot to answer for with regards to that, for it’s not simply that people like to snipe at winners, but more about the fact that they’ve done themselves no favors by presenting themselves to the public and media in a manner that can only be described as arrogant.

It’s also a fact that Contador no longer enjoys the popularity he once did. A sizeable majority of fans wanted to see someone new win, and that’s what we got. It’s a shame that Nairo Quintana didn’t ride but Nibali was worth every red cent of his win. He looks the part too, great bike handler, smooth motion, and though he’s won big stuff before, this one brings a respect that is pervasive.

Bernard Eisel was interviewed after the Champs stage and said “You know, people say that Froome crashed out and Contador crashed out, but I have to say that Vincenzo Nibali deserves this win. He and his team dominated the race from the start, so he deserves it.”

The race would have been different with those two still in it but to take anything off Nibali’s win would be beyond petty. He rocked France this July, make no mistake. As indeed did his team, another shocker.

The peloton has a new daddy, and he’s Italian. Imagine that. 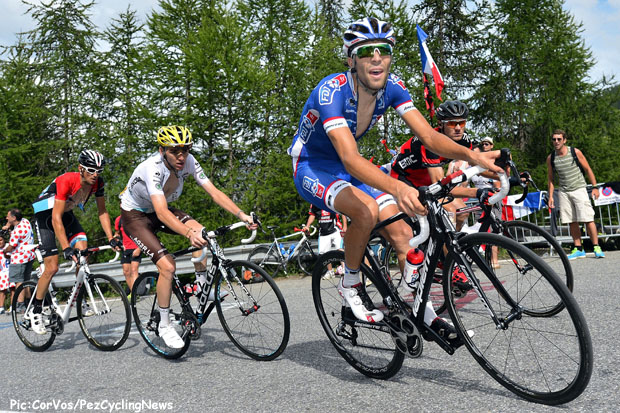 Et voila, the French. What’s the secret? Have they cut back on garlic? Begun showering twice-weekly, instead of once? Or have they stopped smoking Gauloises before every stage? Whatever it is, it’s working.

Thibaut Pinot just got third and is 24, marking him out as the brightest star in the firmament of French road racing. That may be a bit harsh on Jean-Christophe Piraud, but the fact is that Pinot has youth on his side.

Would Pinot have reached the podium in Paris if Froome and Conty were there? Probably not, neither Peraud, but the race was what it was. France delights, and that is good for the race. Pinot’s Ag2r side finally overcame the horror of riding in brown shorts (group counseling sessions finally brought a breakthrough, they say) and rode a very positive race to keep him protected, and to get Romain Bardet in the top 6 also.

They dominated the team competition, a completely unexpected but very welcome event.

Europcar deserve a mention too as a French team that delivered a performance we had come to fear French teams were incapable of, but for me the standout French ride came from Peraud. I have been a bit of a cheerleader for the old chap for some time, since he broke into road racing just 5 years ago after winning the French TT Championships as an amateur. 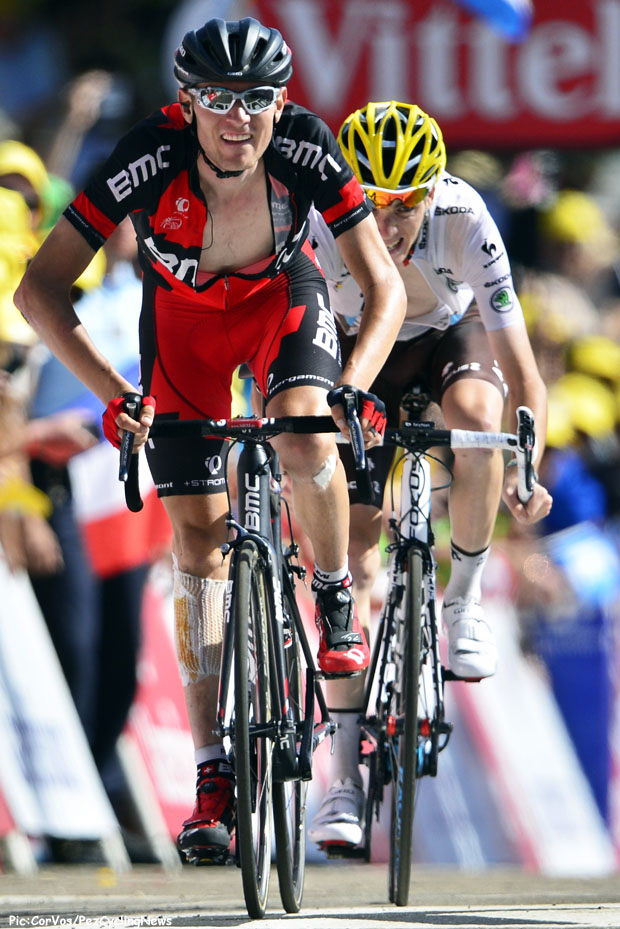 Tejay van Garderen deserves a mention also, he rode consistently and strongly but there’s little doubt that he will be slightly disappointed with his 5th placing, especially with the race behind Nibali having been so wide open for so long. This race offered a great chance for a podium for the American, which is to his credit, but he missed that opportunity.

Greg Lemond is still the last American winner of this race, and it’s safe to say that he was a better bike rider than a commentator, which, if you’ve heard him on Eurosport you will confirm. However, at least he has a clean record. After the final stage they wheeled out Cipollini and described him as ‘the great champion’ and on and on, without making mention of his EPO positives. Vinokourov also came out to chat to Lemond and whether this rankled with the American was unclear, however he certainly stuck to the script by asking the expected questions.

Whether you feel they should be there at all, these guys, is another argument, but I do feel there should be a balance in the reporting.

Speaking of the script, Richie Porte got the re-write delivered to his room after Froome crashed but couldn’t get his lines right. Here, finally, was his big Tour chance and he just wasn’t up to it.

His Sky team similarly was unable to adapt to the conditions on the road and on the bus and had a miserable Tour. Unlike Tinkoff-Saxo, who showed that just because a leader is lost a team need not implode.

Rafal Majka marked himself out yet again as a man to watch, if you weren’t already. Two great mountain wins cemented the KOM jersey to his narrow shoulders, just beating out Nibali. 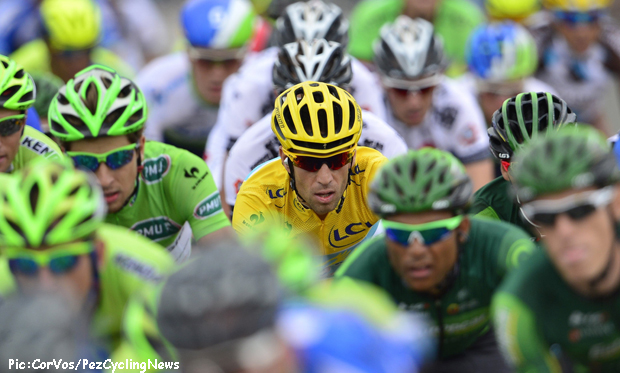 Sagan and Nibali, both jersey wearers but one didn’t win any stages

One rider who won a jersey didn’t get a single stage win, rather unexpected for him. Peter Sagan will keep winning the Green jersey for years unless the rules change – they could just call it ‘Sagan’s Jersey’ and let him wear it all year – but he needs to change things up if he is to beat the real sprinters.

His team manager at the end said that Sagan must change his riding style of he wants to win more, a very interesting comment given that he is off to another team next year. The same criticism would probably not have been made had he been staying on the Cannondale team, but it was a salient point.

Sagan is brilliant, of that there is no doubt, but he can’t beat the likes of Kittel and the rest of the one-day specialists are getting wise to him, finally. He often flutters about the peloton as though he’s looking for inspiration, searching out new ideas to bring him a win, but they aren’t coming.

It will be intriguing to see what happens next with Sagan.

And just when it seemed that the excitement was over, we had that fantastic, engrossing final sprint to the line on the Champs Elysees. Kittel is the real deal, there are no arguments over that, and it was great to see the joy on his face as he was interviewed after the race. 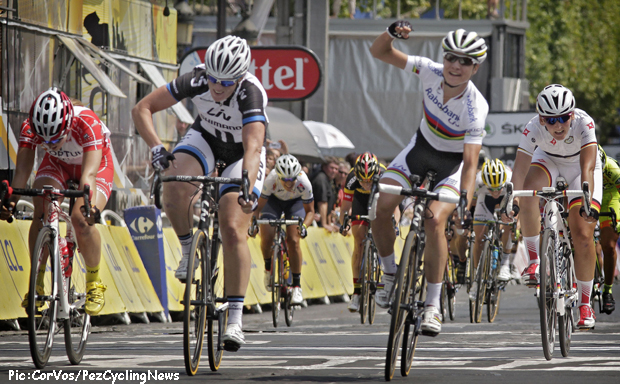 Finally, to the greatest rider on show in Paris – Marianne Vos. Chapeau, Marianne, you are the man. Or, the woman. You know what I mean. Brilliant win, shame all the stations didn’t carry it, and I mean seriously, shame on them, but what a great win. Majestic. As ever.

So, that’s it. All done for another year.