“It’s been awhile, so, it feels good to get the monkey off my back,” said Farrar, whose last win came in August 2012 at the USA Pro Challenge in Colorado Springs. “It was a great finish. This was a beautiful setting for a race finish, and I’m happy I won today.” 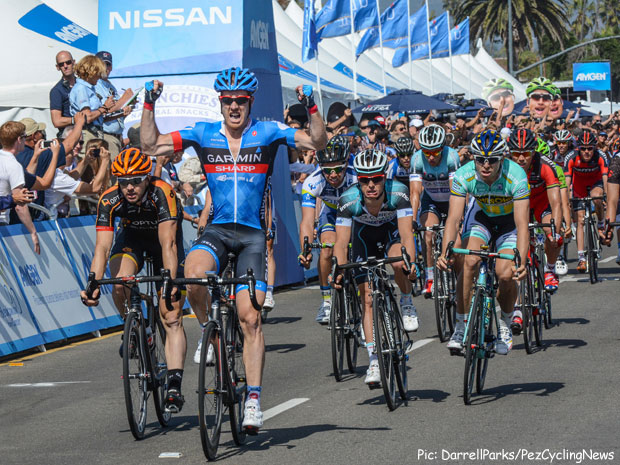 Ten miles into the 84-mile course from Santa Clarita to Santa Barbara, six riders pulled away from the peloton, where they remained until the final few miles of the race. The youngest rider in the breakaway, Bontrager Cycling Team’s Nathan Brown (Memphis, Tenn.) rode nearly 70 miles in the lead group and was the last to be caught by the peloton, earning him the Amgen Breakaway from Cancer® Most Courageous Rider Jersey today. 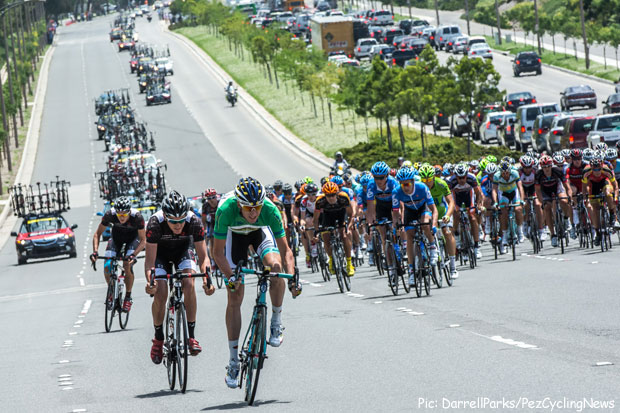 The riders trying to establish the break at the start of the race. 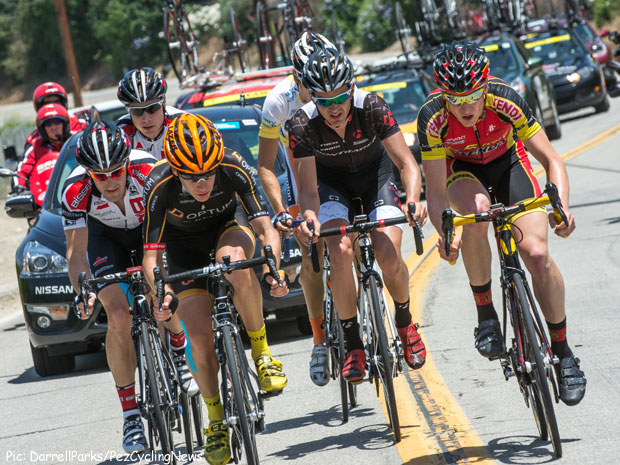 The breakaway of six 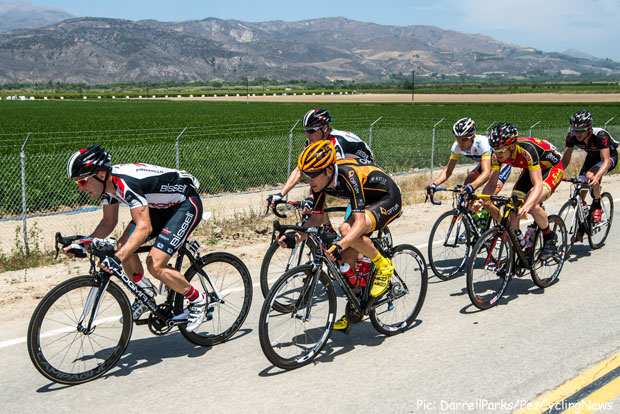 The breakaway held out until shortly after passing through Carpinteria when Jens Voigt (GER) of RADIOSHACK LEOPARD TREK led the attack to catch the riders around the 8-mile mark, followed out of the peloton by UnitedHealthcare Pro Cycling’s Lucas Euser (Napa, Calif.). With a unified field and about six miles to the finish, teams took turns on the attack with Team Garmin-Sharp and Cannondale Pro Cycling leading the peloton with about three miles left, waiting for the right time to bring their sprinters to the front for the dash to the finish. 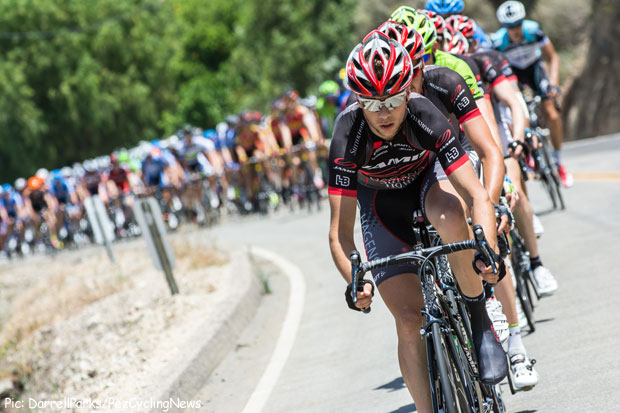 Jamis did the early work, keeping the break in check…. 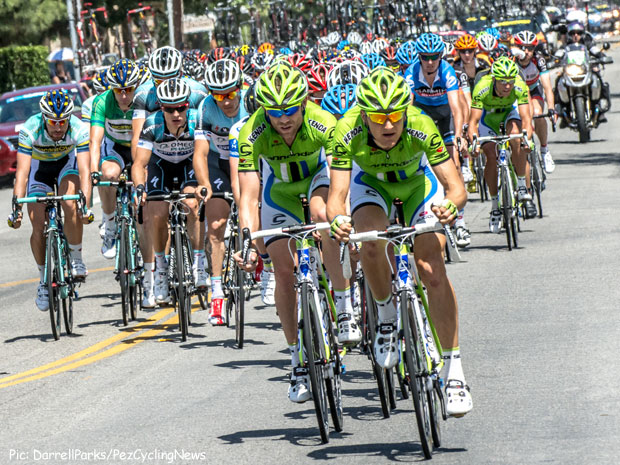 Before Cannondale took over to try and set up Peter Sagan for the win.

A roundabout on the course with about a mile and a half left to ride resulted in a surprise leap ahead of the pack by Ireland’s national road race champion Matt Brammeier, riding for Champion System, with riders from ORICA GreenEDGE and Cannondale Pro Cycling in hot pursuit.

“It was a really fast run into the finish – the last few kilometers were downhill. My team did a really good job taking care of me, and I was able to have the ideal position for the sprint,” said Hanson. “I moved from Santa Barbara this past December. I lived here from 2007 to 2012. This was a really special stage for me, and I’m happy to get on the podium in second place.”

There was no change to the overall leader standings with Team Jamis-Hagens Berman’s Janier Alexis Acevedo (COL) continuing to wear the Amgen Race Leader Jersey tomorrow.

“I’m very happy to continue wearing the yellow jersey every day,” said Acevedo. “It was difficult today; it was a hard stage – high speeds. But in the end my team was helping me to keep the yellow jersey.”

Though he was not on the podium today, Cannondale Pro Cycling’s Peter Sagan was awarded the Visit California Sprint Jersey for his efforts during Stage 4. BISSELL Pro Cycling’s Carter Jones (Boulder, Colo.) continues to hold onto the Nissan King of the Mountain Jersey for a fourth day, and the Crunchies Best Young Rider Jersey will continue to be worn by Bontrager Cycling Team’s 21-year-old cyclist Lawson Craddock (Austin, Texas). 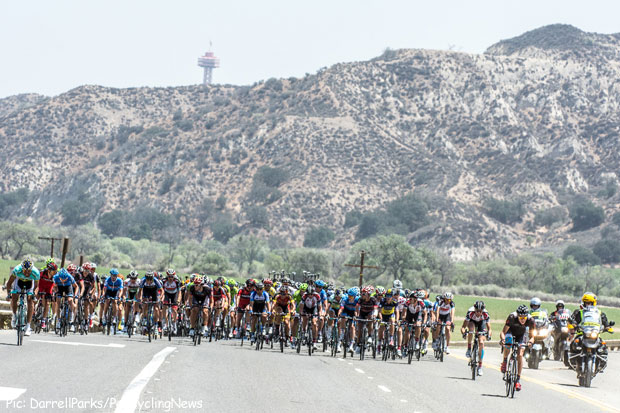 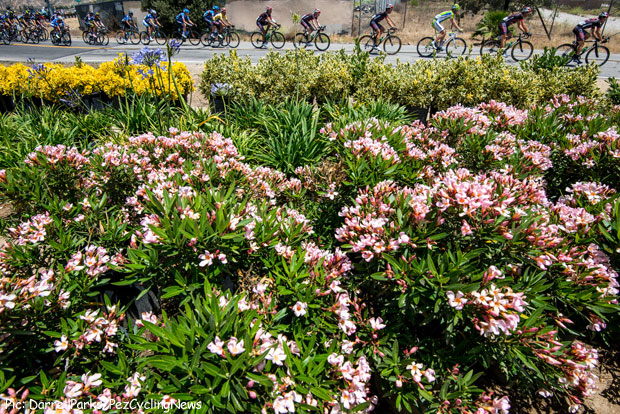 There were plenty of nurseries and orchards on the route today. 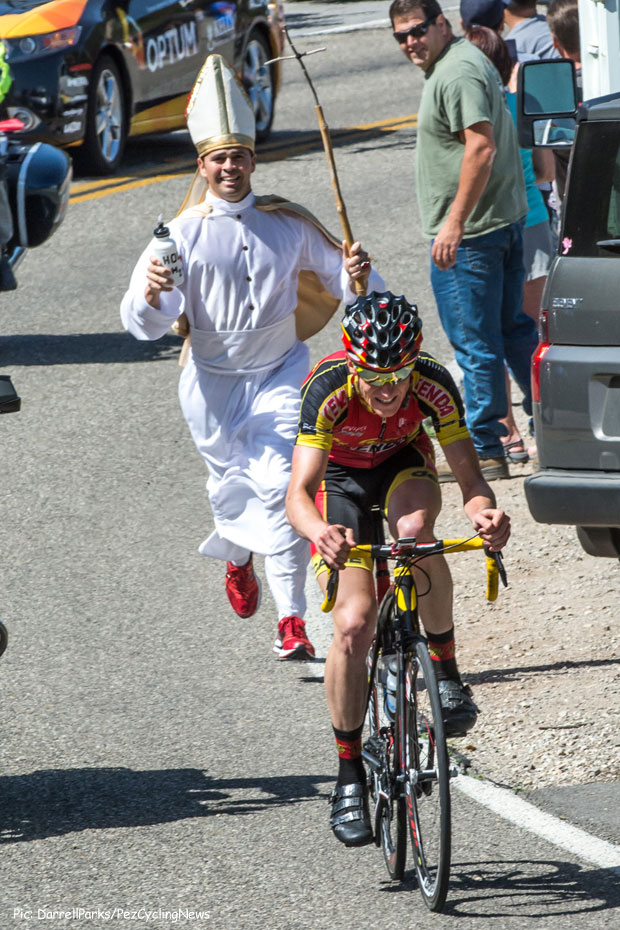 The last KOM of the day was a religious experience for some. 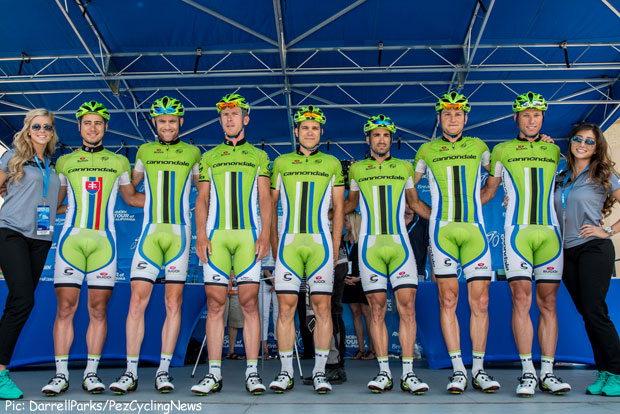 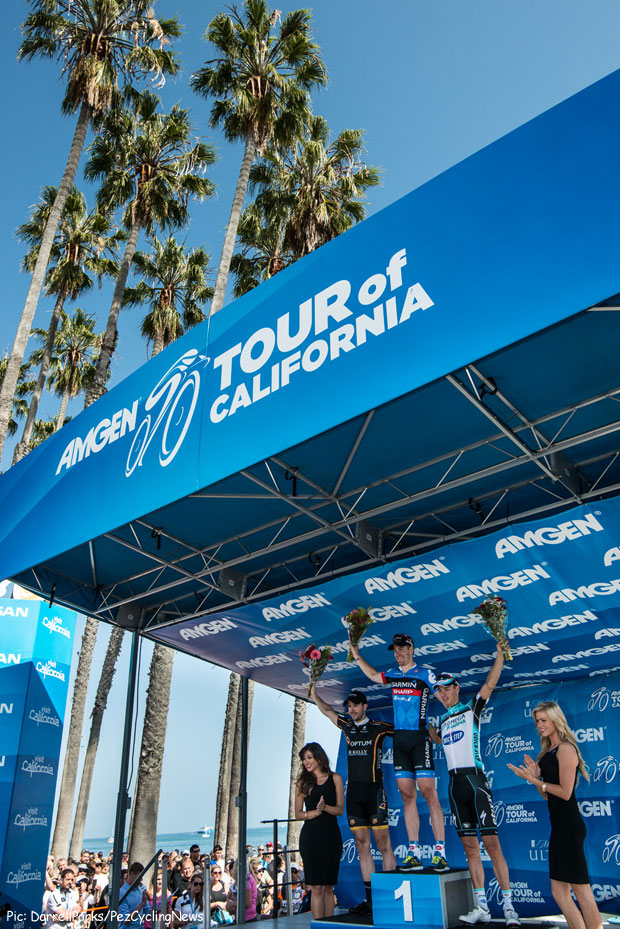 But not at the end with Garmin experiencing a unique trans-Atlantic double of Farrar winning in California and Ramunas Navardauskas taking the win in the Giro on the same day – albeit many hours apart.