As this stage followed the most feared of the tour, it was seen as a bit of a rest-day by many. The race would track its way along the coast road from Kang Leung up to within 20km of the DMZ, then back to Yang Yang along flat roads. It was a curious setting, the riders flying along the coast road, only 50km of 3metre-high razor-wire and hundreds of machine-gun toting army personnel separating them from the beach. There certainly wouldn’t be any Nth Korean spectators lining the course today, on a day when the riders couldn’t help but be aware of the tense situation they were riding through.

Back to the race…Curiously, those who had laboured their way through the third stage would face another challenge. This was due to the race organisers calling on a special rule which gave them the power to reinstate riders who had not even completed two thirds of the previous day’s stage. Indeed, there would be some fresh sprinters legs in the bunch to make the race interesting. 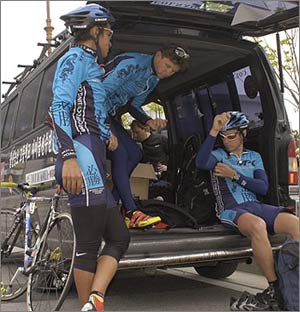 However, these riders never got a chance to see the front as, from the gun, the pace was fast and the race spread all over the road. As the race hit the coast (and a solid North-Easterly side-head wind) Marco Polo rider Cory Lange somehow managed to ride away from a bunch that was strung out in the gutter. He was joined for several minutes by another rider but he couldn’t keep the pace and Lange continued alone. 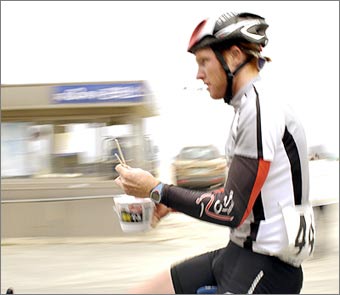 Joel Pearson (MGZT) unable to wait to get back to the hotel to sample some local fare, chopsticks and all.

As the race settled down, Lange continued to ride strongly, gaining a minute lead over the main bunch before a group of six riders bridged across. When they came together, this group worked hard to gain a lead of over four minutes to the main bunch by the mid-way point in the race. By this point, the break found that two of its members were dead-wood as Peter Milostic (Team MGZT) and Mark Roland (Giant Asia) decided it was no longer in their interests to gain more time. Similarly, in the main group, Giant Asia had decided to control the race as they put themselves and two other mercenaries on the front. 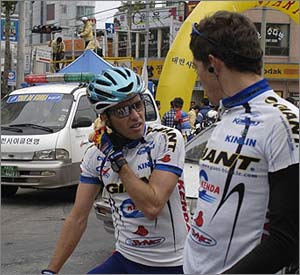 The race turned back on itself and headed back to Yang Yang and the side-tail wind saw the last 30km fly by very quickly. As the break held over 3:30 into the last 20km its success was looking likely. However, with the Stage 3 criterium winner in tow, the win was never guaranteed to be between Milostic and Roland. As the break hit the headed into the last 20km, the Stage 2 winner, Cho, attacked with Roland covering.

Cho, rumoured to have been 4th in the Olympic Points Score, looked super-strong as he and Roland worked to gain over a minute over the chasers. With 2km to go, Roland played his card and attacked the feared sprinter. However, Cho didn’t give Roland an inch and it would come down to a sprint. As the two lined up, Roland hit out with 300m to go in an attempt to surprise Cho. The Aussie pulled his foot though, and Cho sailed down the packed main street of Yang Yang to his second win in three days. Behind, Lange finished a strong 3rd after initiating the winning break.

With a 30km climb in the first 30km of Stage 5, the race is still wide open with two stages to go. 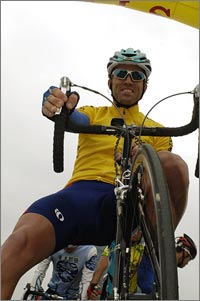 Fabian Jeker Wins Stage 4, And Takes The Lead In The Vuelta Asturias