Yo – pasta boy – not all the racing is in Italy this month… The Tour of Korea began in earnest Monday with the first road stage from Seoul to Chun Chon. The 157km stage would take in some decent climbs in the last third of the race, some spectacular scenery and provide some fierce racing. 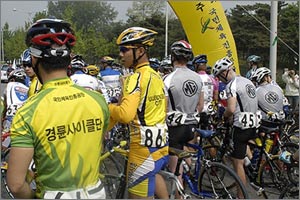 With the race start in Olympic Park the race proceeded to snake through the hectic Monday morning streets of Seoul. The locals turned out in force to wish the international field the best of luck. They headed out toward some pretty serious looking hills as soon as the control was lifted the race was lit up and before many teams could realise, the winning break had gone. Starting off with two riders, it swelled to nine with seven teams being represented, including two each from Marco Polo and the Kazakhstan teams. Before the KOM at 74km the break had managed to steal 2mins on the main group from which Team MGZT tried in vain to escape, being heavily marked as the leading team.

With no team taking initiative at the front of the field, the gap blew out to over 3mins. Realising their error, Team MGZT put their team on the front as the two serious climbs of the day loomed. The race screamed through valleys, through cuttings and seemed to avoid the extremely large peaks on each side as it brought the break back to just over 2mins. Unable to avoid the climbs any longer, the race headed for the sky with the race splintering immediately.

From the convoy we were offered some amazing sights. As we ascended through rice-patties the views became more and more spectacular. It was possibly something the riders were not able to take in as many around us were too busy swinging themselves forward grabbing anything they could on nearby team, medical and even official cars! The view was even better at the top but we were quickly distracted by having to dodge a disfigured bike lying in the right-hand lane whilst the rider decided to relieve himself rather than remove the bike from the road as we skidded past at 80kph.

As the race hit the steep undulations on the way into Chun Chon, the lead group had been whittled down to three, Glen Chadwick (Giant Asia), Kam Po Wong and Michael Carter (both Marco Polo) whilst a chasing group of 20 seemed unable to bring them back, the gap still over 2mins. With two riders each from Giant Asia and Marco Polo in the chasing group, there was little co-operation in closing this gap. Chris Carr and Paul Redenbach from Giant Asia were covering superbly as the race swept into the streets of Chun Chon. 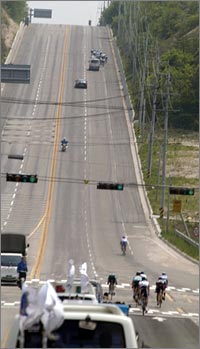 Into the last 3km, Brett Aitken attacked (Team MGZT), closely followed by Redenbach, Carr and Cory Lange (Marco Polo). Meanwhile, up the road the Marco Polo duo were busy working over their breakaway companion, Chadwick. By the finish, Kam Po Wong had taken the victory thanks to some great work by Carter. Aitken took the sprint for fourth over Redenbach, Carr and Lange breaking a Marco Polo – Giant Asia clean sweep at 1min54. Another thirty seconds down, what was left of the main group of (14 riders) came in.

Such a great ride by both Marco Polo and Giant Asia put them in a strong position on general classification with Wong taking the jersey by 3secs over Chadwick with only 11secs to Carter. 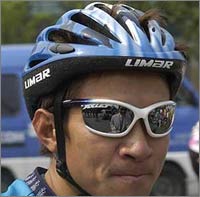 Giro Diary: Inside The Break

Maestre The Maestro, Stage 1 Of The Vuelta Asturias