Race Report: Hot conditions in the Tour de France saw the roads melting and the riders doing much the same as ice bags were the order of the day. The main breaks were pulled in on the long slopes to the finish and a sprint was set up for the fast-men that were left for the battle. Good for Kristoff, bad for Sagan.

All the riders were suffering in the heat today, five riders pushed on, first they lost one to a crash and the others to the speed of the bunch behind. Last man out was Simon Clarke, in the end he was also swept up by the Giant-Shimano team who could see a win for John Degenkolb, but so could Peter Sagan and Alexander Kristoff. At the end there was a battle for supremacy and Kristoff had the bearded Paolini to get him into the best position for the finish line. 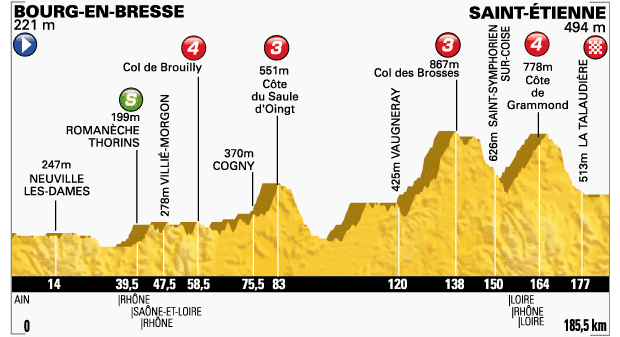 No Andrew Talansky
After finishing well down in stage 11, but managing to finish before the time cut; Andrew Talansky (Garmin-Sharp) did not start stage 12.

Talansky said this morning: “I’m absolutely heartbroken to leave the Tour de France. I had hoped the rest day would allow some time to recover from my crashes. I was hopeful that I could get through yesterday and I tried to be there for the team, the way they have been there for me this whole time. But it proved to be too much. I wanted the team to keep up the fight for the stage, and in turn for them, I wanted to fight to the finish. It’s been hard for me personally with the crashes but I’m really proud of how we rode together here. I’ll go home now and rest and recover but I will be watching from there and cheering for my team every day.”

Medical Update from Kevin Sprouse, Team Physician: “Andrew is suffering the cumulative effects of multiple crashes during the first part of the Tour, in addition to battling an upper respiratory infection. The impact on his hip from the crash on Stage 7 has led to acute sacroiliitis, from which the pain has made it increasingly difficult for him to pedal.” One of the many crashes of Andrew Talansky

The Start
A very fast start saw the usual attempts at a break away and in the end Sebastian Langeveld (Garmin-Sharp) instigated the escape that stayed away. Langeveld, the Dutch national champion, was joined by Gregory Rast (Trek), Simon Clarke (Orica-GreenEDGE), Florian Vachon (Bretagne-Seche Environment) and David de la Cruz (NetApp-Endrua) and after 20 kilometres they had over 2 minutes lead.

The Intermediate Sprint
After 39.5 kilometres; Florian Vachon took the points ahead of Rast and Marcel Kittel (Giant-Shimano) took the bunch sprint. Peter Sagan (Cannondale), the points leader, picked up 5 points.

Col de Brouilly
Over the top of the first climb David de la Cruz took the 1 point on offer, but there wasn’t much of a battle. Behind; Giant-Shimano had put the ‘break killer’ Ji Cheng on the front and the lead was controlled at around 4 minutes.

The temperatures were hot in the valley before the next climb and the race didn’t change as Giant and the peloton were quite happy to keep the escape at the 3 minute and 50 second mark. The peloton was more occupied with the distribution of bottles and in some cases (Langeveld) putting ice down the back of their jerseys.

Côte du Saule d’Oingt
The second climb of the day was quite a narrow road winding its way leisurely through some small villages, with vineyards on the hillside, at any other time this would be a great bike ride. The crowds were out to see the race pass on a road that probably doesn’t see much traffic on other days, it wasn’t like Yorkshire, but close. At the top De la Cruz was first again, but there are only 2 points for a Cat 3, so there wasn’t of a fight, Rast second.

Ji Cheng towed the bunch over the summit at 4:55 as the race entered the final 100 kilometres.

Down into the village of LeBois d’Oingt and Langeveld slipped on a corner and took the wheels from De la Cruz, both hit the ground hard. Langeveld eventually recovered and recaught the group, but De la Cruz was left holding his shoulder at the side of the road.

After the feed zone the speed of the peloton lifted as Europcar started to help Giant and the lead was 3 minutes with 75 kilometres to the finish in St. Étienne.

Coming towards the penultimate climb the gap to the leading four riders had dropped to just over 2 minutes. Simon Clarke (Orica-GreenEDGE) was out front nearly all day, most of the time with Sebastian Langeveld (Garmin-Sharp)

Col des Brosses
The Col des Brosses is quite a long climb for this area at 15.3 kilometres, but not steep with an average slope of 3.3%. Langeveld and Clarke were quite happy to push on leaving Rast and Vachon in their wake. Under the impetus of Europcar the speed had lifted and a few riders were in trouble at the back of the peloton from a mixture of heat and speed.

Over the summit and Clarke didn’t contest it and Langeveld was first.

Côte de Grammond
The pair up front was not going to give in to the peloton easily and held them at 2 minutes for a long time. Europcar eventually pulled the lead down to 1:30 and at that point (32 K’s out) the Europcar pair of Gautier and Quenmeneur attacked from the bunch and made the effort to try and cross to Langeveld and Clarke. As soon as the Frenchmen headed off; Giant-Shimano were forced to chase again.

Simon Clarke knew that his time at the front was nearly up and attacked Langeveld who must have been nearly at the end of his energy as Gautier and Quenmeneur shot past the Dutch champion. Giant-Shimano had four men towing John Degenkolb up the drag of a climb. Gautier & Quenmeneur (Europcar) caught Clarke, but all for nothing

At the top of the Côte de Grammond; Clarke had 10 seconds on the Europcar duo and when he was caught, with 20 kilometres to go, Clarke grabbed the French wheels for the descent to the finish. Astana moved up behind Giant to protect Vincenzo Nibali, Movistar jerseys were also in abundance along with BMC as the race readied its self for the plummet down to St.Étienne.

The peloton were only 50 seconds behind Gautier and Clarke as they hit the 10K banner, Quenmeneur had been burnt off.

10 kilometres out and the peloton could see the two escapees just in front of them, Clarke couldn’t or wouldn’t come through to help. With 5 kilometres to go the race was all together. Cannondale had Sagan near the front as did Lotto Belisol with Andre Greipel, Katusha were also working for Kristoff. All was looking good for Greipel until a touch of wheels brought him down at 3 K’s out.

2K’s to Go!
Cannondale now had the bit between the teeth for Peter Sagan, but on a slight rise Paolini pushed into second spot for Katusha and Alexander Kristoff. OPQS then jumped into action with Kwiatkowski and Trentin. Degenkolb saw a space on the inside, but Kristoff was in the middle of the road with Sagan on his wheel. French champion Demare (FDJ.fr) had taken Sagan’s wheel, but the speed of Kristoff was too much for everyone else and they finished in that order with Demare third and Michael Albasini (Orica-GreenEDGE) in fourth. Stage winner Alexander Kristoff said after the finish: “It’s a great feeling, I’ve been dreaming about this. I sat on Trentin and saw Degenkolb go so I knew it was time for me to go.”

Yet another disappointment for Peter Sagan, his green jersey looks more than safe, but what about that stage win?