Race Report: On a day when Vincenzo Nibali could have sat back and watched the others fight it out for the podium places, the ‘Shark of Messina’ rode away from everyone with 10 kilometres of the Hautacam still to climb. Behind the French jumped Valverde to push him off the podium.

We had another full day of excitement in Stage 18 with the usual big break not being allowed too much space at the front. When there was only Mikel Nieve left up the road, the yellow jersey launched himself up the mountain in a show of domination that no one could answer. The others had to fight over the crumbs and the French distanced Alejandro Valverde denying him his place on the first three steps of the podium. Barring accidents, Nibali has won the 2014 Tour de France, but the others still have a fight on their hands to stand next to him. 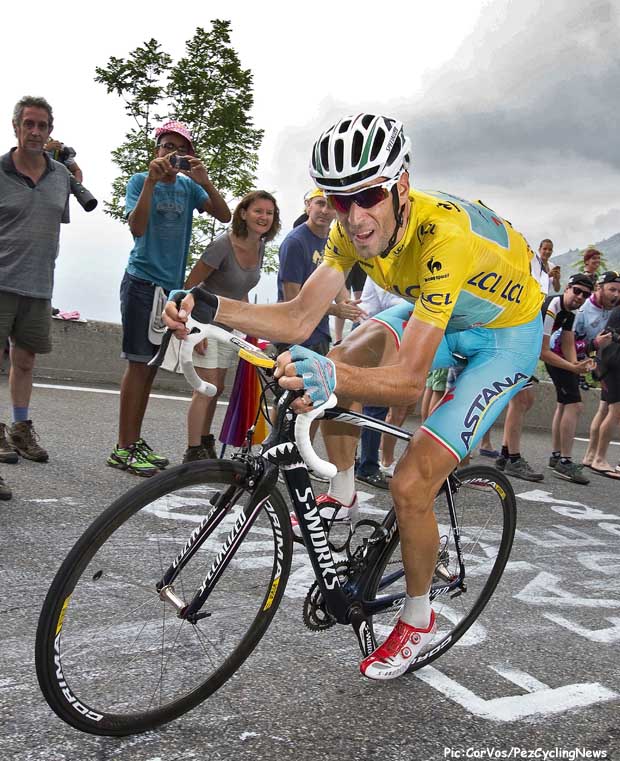 The Shark solo’d to the finish.

Stage 18:
Today’s 145.5 kilometre stage from Pau to Hautacam was billed as the big battle between Froome, Contador and possibly Vincenzo Nibali, how things can change. Now we have a fairly secure Nibali, but the battle is still here for the podium; Valverde and the French guy’s want the lower steps. The stage has two Cat 3 climbs; the Côte de Bénéjacq (2.6km at 6.7%) and the Côte de Loucrup (2km at 7%). Those climbs are not in the same league as the two main ascents of the day, the Col du Tourmalet (17.1km at 7.3%) and the Hautacam (13.6km at 7.8km) both of which are Cat HC. There is also a sprint after 61.5 kilometres, but there isn’t much interest in that now. 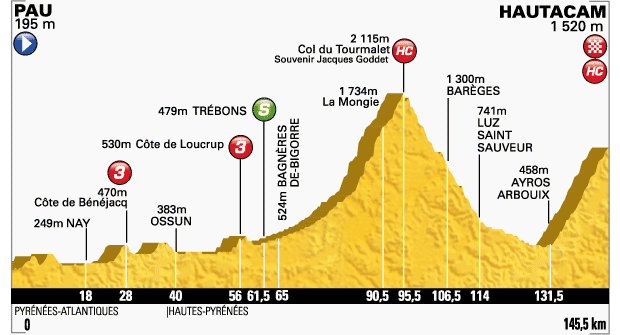 The Start
Just like yesterday; it didn’t take long for the attacks to start and as usual it took time for the race to settle down. Lots of attacks and lots of chasers and even some riders in trouble with 140 kilometres still to go.

Daniel Oss (BMC) and Bartosz Huzarski (NetApp-Endura) were the first to get any sort of gap, they were joined by 18 others and their lead soon started to grow. Within 20 kilometres they had over 2 minutes on the Astana controlled peloton.

IAM Cycling’s Heinrich Haussler had to abandon due to a stomach problem.

Côte de Bénéjacq
Up the first climb of the day; Marcel Wyss and Kévin Reza rode at the front of the break. Huzarski was first over the line with Reza on his wheel, the peloton were nearly 4 minutes in arrears.

Astana picked the pace up a little as the race entered the last 100 kilometres and the lead dropped slightly to 3:25, but there was no urgency in the peloton.

Côte de Loucrup
Reza again was the front man up the Loucrup, but at the top; Boom was first followed by Huzarski. The bunch wandered over 3 minutes later.

The Intermediate Sprint
Into the village of Trébons and Bryan Coquard was first, but it won’t worry Peter Sagan in his green jersey with 408 points to Coquard’s 253. From this point onwards the road started climb the enormous Tourmalet to the altitude of 2,115 metres for the Souvenir Jacques Goddet.

Through the feed at Campan some riders missed their bags and bottles’ preferring to take them from the cars as the road was less than level.

Col du Tourmalet
At the start of the Toumalet: Huzarski rode hard at the base and then Voeckler took over, but no one wanted to hurt this early, again Reza became the pace setter, although Oss caused a little split in the break for a short time. In the foothills Coquard rode hard for Voeckler until he blew, being the first causality of the escape.

IAM Cycling’s Sylvain Chavanel wanted to get on with the job and rode off the front, much to the disinterest of the others. Tiago Machado was the next to be dislodged from the break as the gruppetto was formed at the back of the bunch for the long ride home as the yellow jersey group had been whittled down to around 50 riders.

Chavanel pushed on with Nieve and Kadri crossing to him. They caught the Frenchman and passed him as did the others of the break.

As the leaders approached the ski resort of La Mongie Nieve distanced Nieve, but they got back together as they still had a third of the climb to go. Huzarski, Di Marchi and Trofimov were at 33 seconds and Voeckler was 1:49 back and the Nibali group at 4:05.

The peloton was being pulled up the mountain by Westra and Scarponi with Nibali on his wheel.

Further up the mountain; Voeckler had blown and couldn’t hold the wheel of Jon Izaguirre, when he caught the face making Frenchman. Voeckler had to be helped by his team car to carry on moving.

The top of the Tourmalet was covered in fans and low cloud, Kadri jumped for the hill prime and Nieve had no choice but let him have it.

Trofimov was next with Di Marchi and Huzarski at 1:39 and the bunch was at 4:32. The good news was that the road was dry and comparatively safe for the descent. Izaguirre and Herrada sat up on the drop to wait for their Movistar team leader, Alessandro Valverde. By the time they got together Valverde was around 20 seconds up on Nibali, FDJ.fr had to chase which all worked well for Nibali.

Into the valley and Nieve/Kadri had 3:12 on the peloton which was catching the Valverde group and between them was the left-over’s of the break.

Under the 20K to go banner and Nieve & Kadri had 1:25 on the six chasers and 2:33 on the peloton and Astana had lifted the pace. 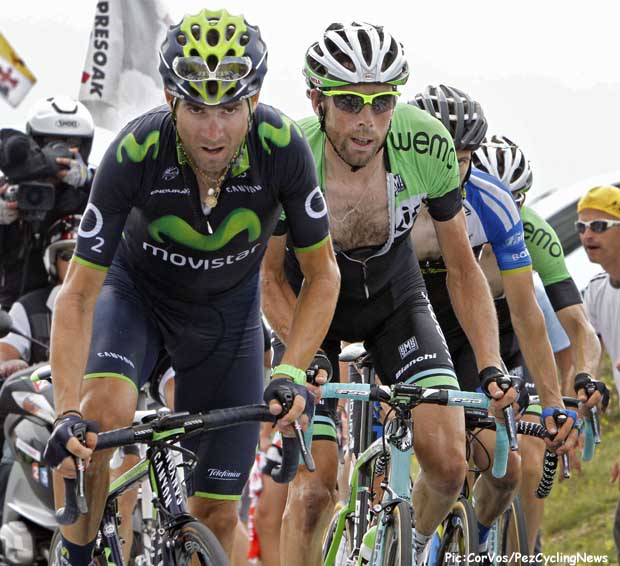 Not a great day for Alejandro Valverde

Hautacam
At the base of the last big climb of the Tour with 14 kilometres to go, Nieve and Kadri had 1:32 on the yellow jersey group, the chasers only had 20 seconds from the Nibali arrow.

Nieve struck out on his own with 12.2 uphill kilometres to go. Scarponi was doing the lead work for Vincenzo and pulled back the small chase group as Valverde was glued to the wheel of the yellow jersey.

Chris Horner (Lampre-Merida) attacked and Nibali jumped on his wheel in a flash, which put the pressure on Valverde who only had one rider to work for him.

10K to Go
Nieve had 50 seconds on Horner & Nibali, the next group of Valverde, Majka, Bardet and the others were over a minute back.

Just when we though all was going to be steady… Nibali attacked Horner.

The ‘Shark of Messina’ was riding smoothly and in 2 kilometres caught Nieve, he didn’t look across and shot straight past. Behind; Rafal Majka rode away from the Valverde group. Valverde had to sit on the French riders (and Van Garderen) as he now had no team mates.

Ten Dam was next to make a move, this launched Pinot off the front and Valverde had no answer. Van Garderen and Peraud joined Pinot.

5K to Go
Vincenzo Nibali had 49 seconds on Majka and 1:30 on Van Garderen, Pinot and Peraud with Valverde not far behind, but struggling to hold the wheel of Bardet, Ten Dam, Mollema, Koneg and Zubeldia (Trek).

The road levelled slightly and Valverde seemed to pull himself together a bit, but the others in his group where not going to help him chase down the Pinot group. They in turn had Majka in sight.

Pinot, Van Garderen and Peraud caught Majka with 2.5 kilometres to go and Nibali was putting more time into everyone.

2K to Go
Nibali had 1:14 on Pinto, Peraud, Majka & Van Garderen and 1:54 on Valverde with his group of passengers. The big battle was Pinot trying to get 34 seconds over Valverde for 2nd overall and Piraud to gain 42 for 3rd.

Into the last metres and Vincenzo Nibali sat up to throw both hands in the air for his fourth stage win and the confirmation of his Tour de France win. 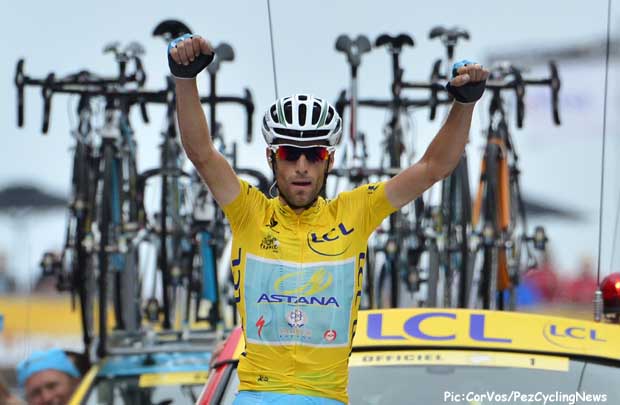 Majka jumped for KOM points, but Pinot just got the better of him on the line. Bardet attacked Valverde for a little time advantage, but now all eyes turned to the clock and Valverde to see how the podium would look tonight.

Valverde came in at the back of the group 49 seconds after Pinot and 44 seconds behind Peraud and so the man from Murcia dropped off the podium by 2 seconds.

That’s the Tour de France out of the mountains for 2014; stay tuned to PEZ to catch up with Ed Hood’s last day in the Pyrenees.