Race Report: It looked like a re-run of the Nîmes finish as a Garmin rider struggled to hold off a charging peloton. This time, though, perhaps aided by a big crash 3km from home, the US-based team finished their man Ramúnas Navardauskas ahead of all of the fancied sprinters.

As he took off near the top of the climb he was helped by the earlier attack of his teammate Tom Jelte Slagter but he also owed a debt of thanks to the man who lost out in that Nîmes finish, Jack Bauer, as the New Zealander helped to break up the chase behind. In the end, it was a finely judged win by Navardauskas and his Garmin Sharp team and justified JV’s selection of the Lithuanian over Scot David Millar in his final year.

A Day Off?
The Pyrenees have seen some of the most attacking racing in years and yesterday’s stage produced a reshuffling of the podium places, with a distinctly French flavor. Alejandro Valverde (Movistar) rarely endears himself to fellow racers and when the attack came the crack could be heard all the way down in the Press Room.

He’s nothing short of a fighter though and limited his losses to Pinot (FDJ.fr) and Péraud (Ag2r-La Mondiale) and will go into Saturday’s time trial with something to prove. But yesterday was all about Italy, and it’s new Emperor. Vincenzo Nibali has stamped his authority all over this race and Hautacam was a stage he had wanted to win all along. In doing so he stretched his lead to the longest in the modern age while behind Rafal Majka (Tinkoff-Saxo) stitched up the KOM jersey and Peter Sagan put the Green jersey beyond reach. 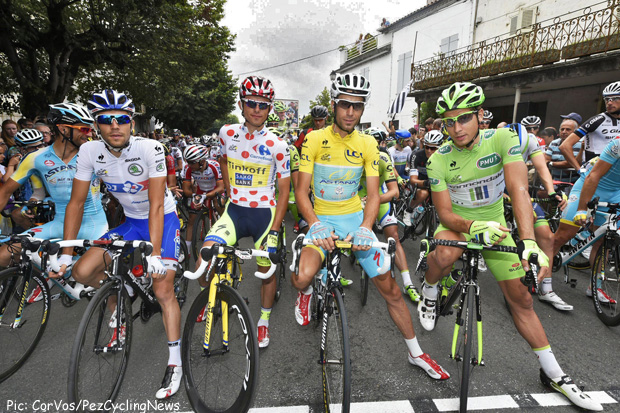 So today should have been a surrender of hostilities between the GC contenders as they prepare for tomorrow’s time trial. But there are teams and riders who have underperformed in this Tour and are in desperate need of a stage victory. With a small 4th cat climb 13km from the finish, and some of the sprinters looking a little ragged after the mountains, it was back to a breakaway.

Breakaway, Rain and Punctures
After the sun of the mountains it was all grey skies again as the riders set out from the start at Maubourguet Pays du Val to race the 208.5km to Bergerac. Several attacks were put in right from the gun and eventually a group of five riders formed at the head of the race.

The group contained Cyril Gautier (Team Europcar) who was the first to attack, Tom Jelte Slagter (Garmin Sharp), Martin Elmiger (IAM Cycling), Arnaud Gerard (Bretagne-Séché Environnement) and Rein Taaramäe (Cofidis) and they smoothly began to build a lead. By the time they had passed through the oddly-named town of Condom they had pushed the advantage to over two minutes and by the time they crossed through the sprint point at Tonneins the lead had stabilized at the two-minute mark.

Behind in the Cannondale lead peloton it was punctures dominating the news with both Marcel Kittel (Giant-Shimano) and Chris Horner (Lampre-Merida) amongst the victims. The damp roads had dragged grit onto the surface and not everyone was enjoying the conditions. The pace wasn’t too high and everyone managed to rejoin but riders were thinking about the weather conditions for the finish. Rain showers had been forecast and it could come down to the rider with the best bike-handling skills. Peter Sagan at last?

A fairly strong tailwind was blowing so the break was holding its advantage despite Lotto-Belisol coming to the front of the bunch and upping the pace. With no other teams really committing, the gap began to go back out and with 55km remaining it had stretched to 2:30. Cannondale was attentive and Astana were continuing to tap out their rhythm. With the wind moving to the side the bunch was beginning to line out and some legs would still have been very sore from the mountains.

More Rain
And now the rain was falling in earnest. It seemed to come in waves and was preceded each time by a blast of wind. This meant that the peloton was stretching as the interested teams, nervous in the poor weather, were keen to get the end of the stage.

With this injection of pace the gap began to come down. Team Katusha had joined the chase thinking about Alexander Kristoff for the sprint. Up ahead Garmin DS Robbie Hunter had come up to speak to his rider Slagter and soon after, sensing a slackening in impetus, he took off on his own.

Coming Together
With 25km to go Slagter was now ahead of his former companions but the gap back to the bunch was below the 1-minute mark. The diminutive Dutchman was driving for home, hoping to get over the climb and into the narrow, twisting streets ahead of the race.

The sprinter’s teams though were beginning to gear up and Sagan, Greipel, Renshaw and Kristoff all fancied their chances. For Sagan, he desperately wanted that illusive stage win to crown the Green jersey.

Passing under the 20km banner and the former chasers had been swallowed up. Slagter was ahead by 20 seconds but Cannondale and Omega Pharma were now trying to control the stage for their sprinters. Jan Bakelants (OPQS) feigned a little attack from the bunch and this had brought the other sprint teams to the fore as he was picked back up.

The rain was streaming down the roads as they came towards the sharp r/h turn leading into the last climb, Côte de Monbazillac. 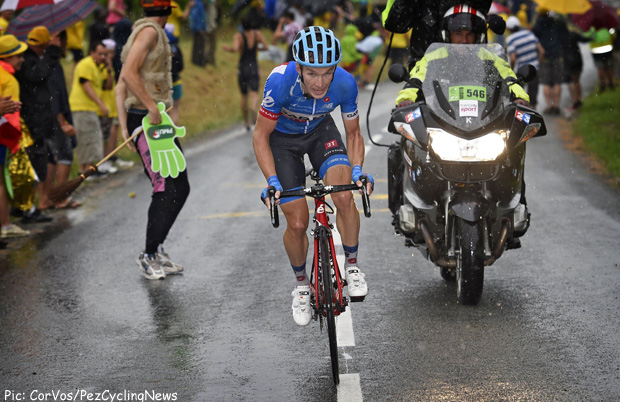 Hanging On
Slagter was still ahead by 25 seconds as the bunch tried to negotiate the tricky lead-in to the climb but they could see him now. Gaps began to appear in the peloton and Kittel was quickly out the back, shaking his head.

And now there were only two motorbikes between the bunch and the leader. Another attack, and another Garmin rider Ramúnas Navardauskas made the junction as the bunch was spread right out on the short, sharp climb. Slagter crested the summit and pulled aside and the big Lithuanian powered away.

Navardauskas shot down the descent and under the 10km banner. It was all downhill to the finish now and the gap was creeping out. Sagan was in the chasing group 17 seconds behind but the chase was disorganized as the Garmin rider Bauer tried to slow it down for his teammate.

The peloton as a whole was flying along but riders that had been distanced on the climb were getting back on. This meant that Cannondale was not chasing as hard as they needed as the Lithuanian moved even further ahead. Omega Pharma also moved forward but approaching the 5km mark the gap was 24 seconds.

Chute, Chute, Chute!
Tinkoff-Saxo hit the front for Daniele Bennati with Nico Roche working hard for the team again. Omega Pharma riders were switching places at the head of the bunch and it was down to 16 seconds.

And then the inevitable happened. Just inside the 3km limit a big group went down with Sagan and Greipel hitting the deck. Also falling was Romain Bardet (Ag2r-La Mondiale) but his position in the overall was safe which is why he stayed sat on the ground for a while.

Omega Pharma tried to take up the chase but the crash had caused a huge amount of confusion as riders looked around for their sprinters. Navardauskas was giving it everything for the win and as he came around the final turn we were treated to the same sight as the finish in Nîmes. This time, though, Garmin had got it just right and unlike Bauer, Navardauskas had time to sit back with 25 meters to the line and, 7 seconds in hand, enjoy the win. 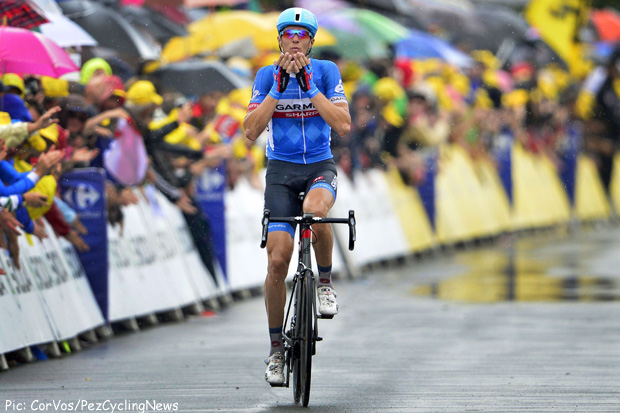 The sprint for second was taken by John Degenkolb (Giant-Shimano) from Kristoff and Renshaw (OPQS) but riders then slowly rolled across the line as they recovered from the crash…some who had gone down and lots of others who had been delayed.

And now it’s on to tomorrow’s time trial where the top-5 could change around again with Spain, in the shape of Valverde, coming back up the rankings. Keep it Pez for the Roadside Report, PeloPics and more.

A piece of the Arctic Race of Norway for everyone