Race Report: A long time trial full of action saw Tony Martin once again show his class with a superb win but it was the GC battle that had the excitement boiling today with 8 out of the top 10 GC places changing after the time trial was done and dusted. Stage 20 of the 2014 Tour de France was a great day for some and a nightmare for others…

The Route
The 2014 Tour made the riders wait until the second last day to pull out their time trial rigs but what a time trial it was – a full 54km of testing terrain from Bergerac to Périgueux. 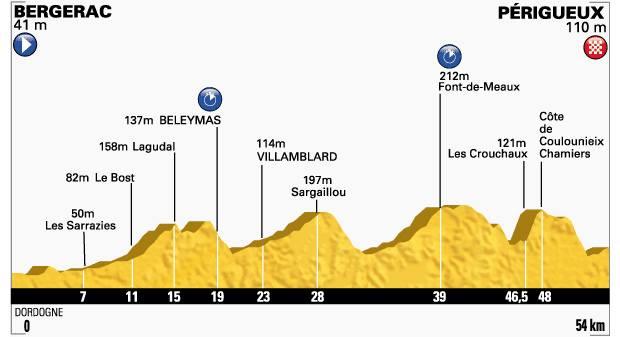 A quick look at the profile shows some hills en route but in reality these hills are more long drags and false flats rather than true climbs although the exception is the Côte de Coulounieix that came after 48km. It may only be 1.5km long at 6.5% but after an hour of all out time trialling in the big chainring it will be sure to hurt the legs and could be decisive for the final result.

The Situation
Today’s race was actually a race split in three parts – those riding around just trying to make the time limit and save their legs for tomorrow, those going for the stage win and those trying to conserve or improve their GC position.

First man off today was the Lanterne Rouge Cheng Ji who at almost 6 hours behind Vincenzo Nibali’s yellow jersey most definitely belonged to the first group of riders and he cruised around the course in a time that was quick enough to beat the time limit ahead of tomorrow’s sprinters’ stage where he will have a lot of work ahead of him.

There was no saving the legs from Sky’s Danny Pate though who set off not long after Ji and quickly put himself in the hot seat setting the best time at all the time checks to finally finish with 1h09m22s. Other challengers for the stage came and went like the GreenEdge duo of Svein Tuft (1h09m44s) and Luke Durbridge (1hr09m59s) but nobody could quite beat Pate although Martin Elmiger (IAM) came close and would have beaten him if not for a puncture that caused him to change bikes and he eventually finished 11s behind Pate.

The Champions Hit The Course
As the day rolled on everybody was waiting for the World Champ Tony Martin and his 58 tooth chainring to hit the course but it was another Champ, Czech Champion Jan Barta (NetApp-Endura) who hit the road first and burned up all the time checks eventually finishing in 1h08m08s, 1m14s better than Pate.

Barta’s time wouldn’t last long though as Tony Martin was now out on the course and at the first time check after 19km he had the best time, 35s ahead of Barta and seemingly on his way to a superb performance already catching and passing numerous riders ahead of him.

At the second time check at 39km Martin had now moved to 1m28s ahead of Barta and by the time he came to the 3rd and final intermediate checkpoint at 48km his lead was now 1m38s and he was still powering his 58 tooth chainring at an impressive speed over the final hill. At the finishline in Périgueux Martin finished in 1h06m21s smashing all before him and the question now was – Could anyone beat him? 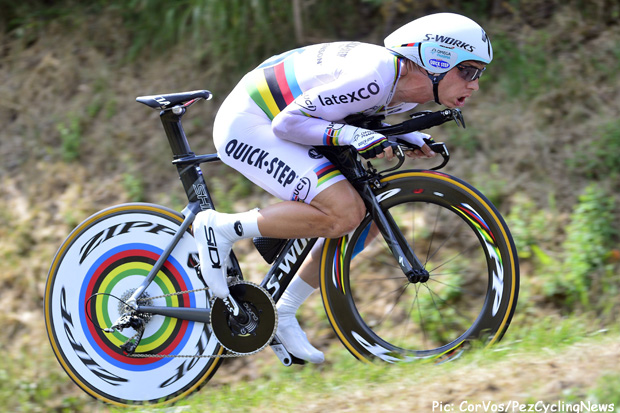 Two National Champions who were hoping to were the Netherlands’ Tom Dumoulin (Giant-Shimano) & France’s Sylvain Chavanel (IAM) who were now out on the course and burning up the road in their respective red, white and blue skinsuits and although both put in great rides neither could get within a minute of Martin. It was Dumoulin who finished the best recording a time of 1h08m (+1m39s to Martin) with Chavanel finishing in 1h08m57s (+2m36s) which was good enough for provisional 2nd and 4th respectively before the Top 20 on GC hit the road.

The Battle For The GC
With Vincenzo Nibali more than 7 minutes ahead of everybody he was only battling for the possible stage win in this time trial but all the other positions in the top 20 could easily change with the gaps often very small between places.

Before the time trial the top 10 looked like this:

The real battle for the French public in particular was to see if the two French riders Peraud and Pinot could hold off the charge of Valverde for the podium whilst Tejay van Garderen was hoping to upset the French with a great time trial and overcome the non time trial specialist Romain Bardet for 5th overall.

Van Garderen started like a rocket in his quest for 5th place catching and passing Bauke Mollema who had started a full 3 minutes ahead of him after little more than 20km covered and he’d already taken a minute out of Bardet.

Bad news for the French there but much better news a bit further back down the road as Valverde came through the first time check almost a minute down on Peraud and Pinot who were both putting in great rides in the early goings of the time trial. It was now looking like the podium battle would be between the two Frenchmen as Valverde was showing signs of fatigue after three tough weeks of racing and the French were both riding the races of their lives. 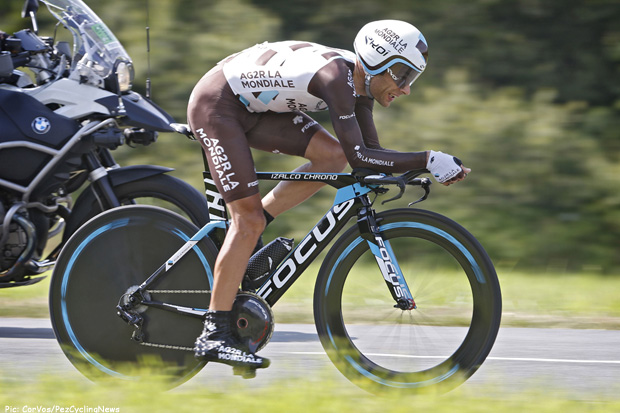 JC Peraud giving it his all for the podium

Puncture!
Just as JC Peraud was flying through the course with a little more than 20km to go and he was turning his 3rd place on GC into 2nd place, disaster struck in the form of a rear wheel puncture. A slow bike change later he got going again but he’d lost his advantage that he’d just built up over Pinot and the battle for 2nd was now even again.

Further down the GC though the battles were far from even with the Belkin duo of Laurens Ten Dam and Bauke Mollema having simply horrible rides in complete reverse to Leo Konig who was flying and succeeding in his bid to leapfrog the Belkin duo into 7th overall. In fact Mollema was having such a tough day that he eventually finished the time trial almost 10 minutes behind Martin in 140th place on the stage. 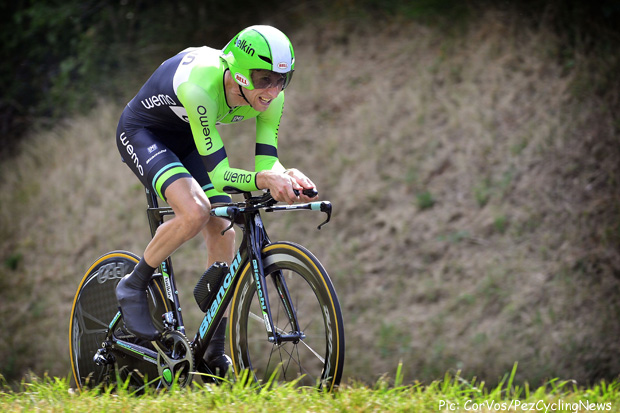 Bauke Mollema’s 140th on the stage was painful to watch – a rider running completely on empty.

The true battles of the time trial were now down to the fight for 2nd between Pinot and Peraud and the fight for 5th between van Garderen & Bardet with Vincenzo Nibali riding a good time trial but not good enough to challenge Tony Martin meaning the stage was the World Champion’s.

Puncture Encore!
Just as it looked like Bardet may be able to hold on to his 5th overall from a fast charging – but fading van Garderen, disaster struck again for the Ag2r team with another rear wheel puncture – this time for Romain Bardet. The subsequent bike change cost the youngster at least 20 seconds which would prove crucial by the end of the time trial as Tejay van Garderen would go on to take the 5th place on GC by a mere 2 seconds. A great result for the American after some tough days on Tour but heartbreak for Romain Bardet after an aggressive Tour de France.

Meanwhile the other battle was going better for the Ag2r team with Peraud recovering well from his earlier puncture and he was able to overtake Pinot to take 2nd on GC with a great ride to finish 7th on the stage and take the 2nd best step on the podium by 32s over Pinot.

Back down the road and somewhat forgotten in the day’s action, Vincenzo Nibali crossed the line resplendent in yellow with a very solid time of 1h08m19s to finish 4th on the stage, 1m58s behind Martin to further increase his lead over the majority of the field. 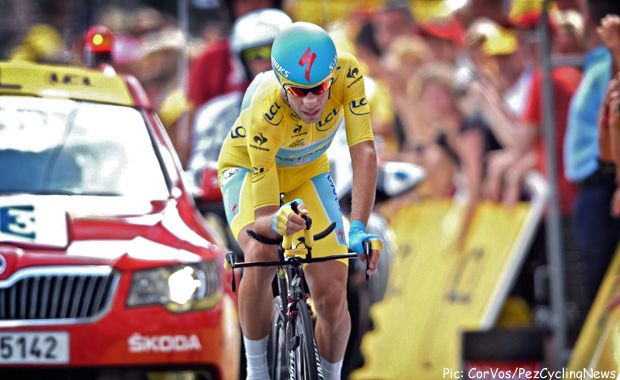 Overall it was a great time trial filled with various battles between the top 10 but the stage victory was never truly in doubt for Tony Martin. He went into the stage as the clear favorite, performed faultlessly and once again showed his time trialling class to the world. The surprise of the day though was Valverde’s failure to make the podium, much to the joy of the French crowd who can now celebrate having two Frenchmen on the Tour’s final podium – the first time that’s happened since 1984 with Bernard Hinault and Laurent Fignon. Big changes in the GC today as every place in the Top 10 changed except for Nibali in 1st and Valverde in 4th and a big day too for Tony Martin who added yet another impressive result to his ever growing palmares.