Race Report: In a race that’s been all about attacking, and attacking again it came down to a sprint finish in Paris. It almost didn’t though as Team Sky attempted to recover from their misfortunes but nothing was going to deny the big German and arguably best sprinter around, Marcel Kittel. From start to finish, he’s shown he’s the man to watch in the dash for the line.

And so we came towards the end of the most attacking Tour de France in recent times. There have been two words that have been quoted again and again: ‘attrition’ and ‘dominance’. From the fast start, glorious weather and huge, huge crowds of northern England into the atrocious conditions of France and Roubaix we saw one main contender after another fall away, literally in most cases.

We lost join-favorites Froome (Team Sky) and Contador (Tinkoff-Saxo) to crashes but we also saw Vincenzo Nibali (Astana) ride masterfully on the cobbles. By the end of the first week, on a rest day that couldn’t come soon enough for some riders, everyone was now saying that it was Nibali’s race to lose. But that would never be good enough for the Sicilian; he didn’t want to win by default, to be the last man standing.

Into the Alps and he showed his class by attacking and attacking, again and again, distancing his rivals every time and taking stage wins along the way. When he crossed the line on the Champs Élysées for the final time today he showed his dominance in this race and wrote his name large in the history books. 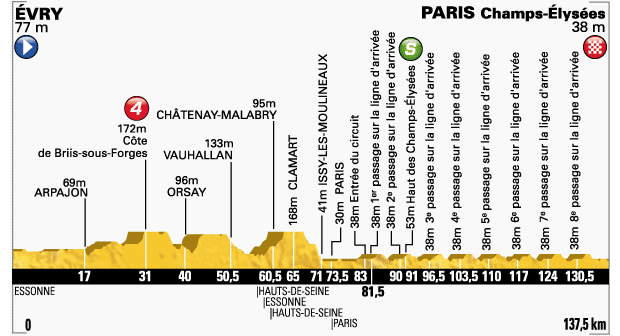 But nothing makes the French public more proud that seeing the emergence of a new cycling dynasty. Not since the days of Fignon and Hinault have they had the real prospect of competing at the highest levels. We had ‘Jeff’ Bernard who never rose to the heights expected of him and we had the dubious behavior of ‘Tricky Dickie’ Virenque and the undulating performance of Christophe Moreau. But now we have the new, young guard in the name of Bardet (AG2R-La Mondiale) and Pinot (FDJ.fr)…and the fantastic performance of JC Peraud (AG2R-La Mondiale). While Peraud may have left it too late in his career it’s great to see Pinot back on top after most people wrote him off last year because of his much publicized mental block over descending…now he just needs to improve his time trialing.

Elsewhere, Tejay van Garderen (BMC) is living up to his promise if he can avoid bad days but Movistar must now be thinking about how they promote Quintana to the position of team leader for next year’s Tour.

All Over Bar the Champagne
Before the race got underway it was all Champagne toasts and photo opportunities. Team Astana bikes were sporting yellow bar tape and Nibali himself was now wearing yellow shorts to go with the jersey. Nibali was posing with the other competition winners: Peter Sagan (Cannondale) in Green, Rafal Majka (Tinkoff-Saxo) in the Polkadots and Thibaut Pinot in the White of best young rider. 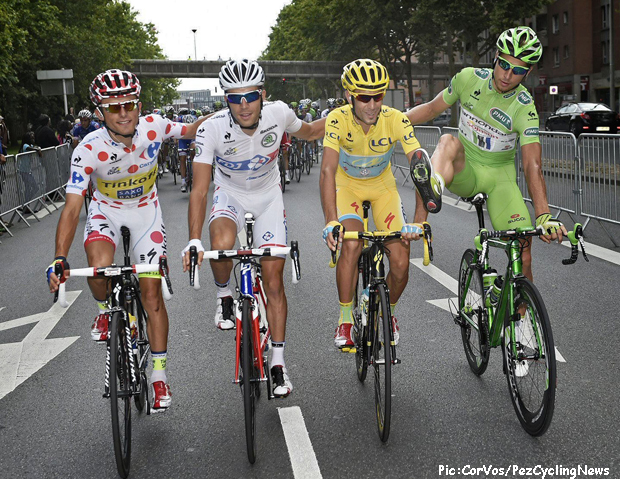 As the race kicked off the celebrating continued as every possible combination was photographed. Astana posed as a team; AG2R-La Mondiale celebrated winning the team classification; Nibali posed with all the surviving Italian riders and teammates and friends smiled and congratulated each other on surviving yet another Tour.

Through at the finish, Marianne Vos (Rabo Liv) was in her usual racing mood and timed her sprint to perfection to take the La Course event but back in the men’s peloton it was all quiet as the riders rolled along with the only action being Marcel Kittel (Giant-Shimano) back at the Doctor’s car having sunscreen applied. Could this be yet another stage for the German rider that would see him back to form or would this be the crowning glory for Peter Sagan? He’s been playing down not taking a stage this year but anyone could see that he’s not completely satisfied. 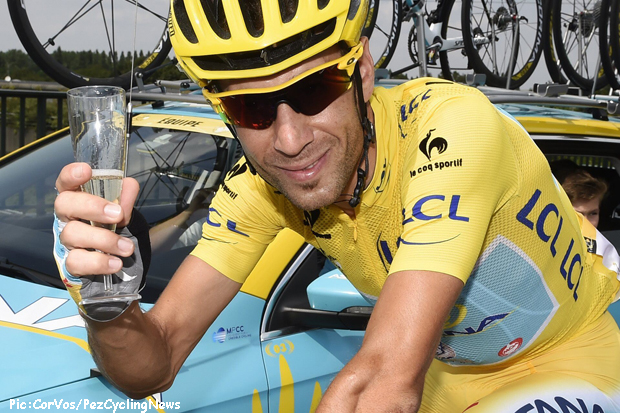 Gentle Increase
As the bunch headed in the general direction of the only climb of the day (not counting the climbs up the Champs Élysées each time around) the pace was slowly increasing but it looked as if hostilities would be off until the traditional first crossing of the finish line.

As they crested the summit of the 4th Category Côte de Briis-sous-Forges Astana was spread across the head of the bunch and had a comedy sprint for the one remaining point in that competition.

The riders worked their way into the outskirts of the city and the pace began to rise. Astana was sitting at the head of affairs and while there was speculation that the race would allow Jens Voigt (Trek Factory Racing) to come to the front to be honored in his 17th and last Tour de France in the end, as the peloton headed across the Place de la Concorde, it was Astana firmly in charge to lead their man Nibali onto the finishing circuit.

They were met by a perfectly timed fly-past from the Patrouille de France as they left a Tricolor up the length of the Champs Élysées. As soon as they crossed the finish line it was racing on and it was typical that it should be a Frenchman on the attack. This time it was the irrepressible Sylvain Chavanel (IAM Cycling) but he was soon dragged back in and as the bunch came along the Rue de Rivoli for the second time, who should fire off the front but Jens Voigt?

This was no ‘gift’ as the oldest man in the race powered away in usual Voigt style. As they came onto the finish straight once again another man clipped off the front and this time it was the second oldest man, Chris Horner (Lampre-Merida).

Other riders began to get across to Voigt and he was joined by Greg Van Avermaet as they moved back down the other side.

Not Again?
As they came back across the Place de la Concorde there was a crash and the big news was that Peraud was on the ground with another teammate. He looked unhurt but with the racing having started he was going to have to chase hard if he was to protect his second place in the GC.

He crashed out last year while in a great position and he surely couldn’t be so unlucky to do so again. 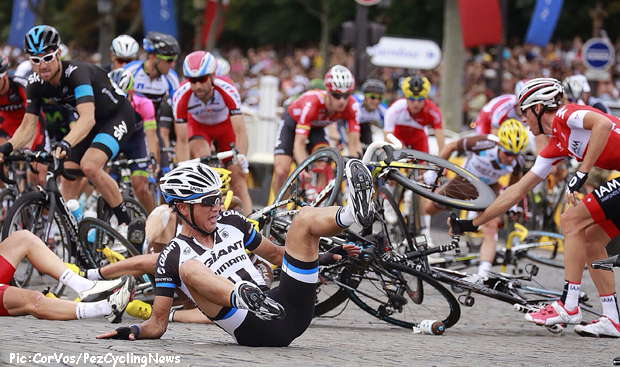 It looked bad for Jean-Christophe Peraud

Up at the front, Voigt had been joined by more riders but they only had a couple of seconds over the chasing pack. Peraud was chasing at 22 seconds but the riders in this year’s race have developed a huge respect for the Frenchman and the racing was switched off to allow him to regain his position.

Sky Plan C
Jan Bakelants (OPQS) made a move but was quickly caught and next to go was Richie Porte (Team Sky) desperate to get something from this year’s race. For the last two, they’ve been in the position of bringing home the winner but it’s been a distinctly sobering experience this year.

Porte had 25 seconds over the bunch in the company of Michael Mørkov (Tinkoff-Saxo), José Serpa (Lampre Merida) and Armindo Fonseca of Bretagne-Séché Environnement. JC Peraud was recovering at the back of the bunch as Lotto-Belisol was driving at the front.

Alexander Kristoff (Katusha) punctured and had a chase through the cars to get back on while getting his saddle fixed on the fly.

Last Dash for the Line
The sprinters’ teams were beginning to wind it up as Orica GreenEDGE joined the chase but one of their men, Luke Durbridge, clipped off the front in an attempt to get across to the break that had now dropped Fonseca. He got reeled back in within a lap though.

The gap had come down a little but went back out as Giant-Shimano eased to allow one of their riders Tom Veelers to get back on after a problem. Kittel and Degenkolb (Giant-Shimano) would need him in the final sprint.

All of the fast finishers were now marshaling their men at the front but this was the point when Tony Martin (OPQS) required a bike change. He was pushed back in by Brian Holm himself and the TT champion attempted to ride himself back to the bunch to help his sprinter Renshaw (OPQS). He was forced to stop again but within minutes, the fastest man in the World was back at the head of affairs.

As the break came down and was very likely to get caught, Porte attacked again. With 12km to go it was a do-or-die attempt to rewrite the finish and he had 11 seconds as he rounded the Arc d’Triomphe.

All of the teams were chasing and by the time they came back out of the tunnel he was just about to be reeled in. Paolini (Team Katusha) had punctured and was chasing to get back on for Kristoff.

Last Lap
As they came on to the Champs Élysées for the penultimate time it was all together as they took the bell. The lead-out men were looking for their sprinters as they all tried to sort themselves out. One more attack around the Arc and this time it was Simon Clarke (Orica-GreenEDGE). He sped down the road as the teams behind were all fighting for position.

Giant-Shimano was working hard and Clarke couldn’t survive. It was all about the lead-out as Tony Martin attempted to bring Renshaw forward while Sagan freelanced from wheel to wheel. As they came down the Rue de Rivoli it was a free-for-all with no-one in control but out of the chaos Giant-Shimano once again took charge. 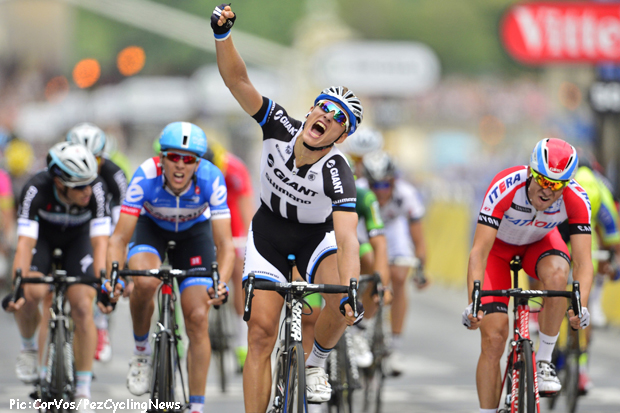 Across the Place de la Concorde and onto the Champs Élysées and it looked as if Marcel Kittel had gone too soon. He seemed to be out on his own just as Alexander Kristoff came alongside and pulled ahead. But Kittel fired the afterburners and just came right back at him and overhauled the man from Oslo and was moving away as he crossed the line to ‘top and tale’ this fantastic Tour de France.

Behind the madness of the sprinters Nibali crossed the line with his arms in the air and the congratulations of his teammates all around him. He’s won his first Tour de France but if he can repeat the performance shown in this race then it won’t be his last. Everybody wanted a piece of the Italian Champion but Vinokourov was right there to make sure his rider got through to his family. And two Frenchmen on the podium…who’d have thought that back in Yorkshire? 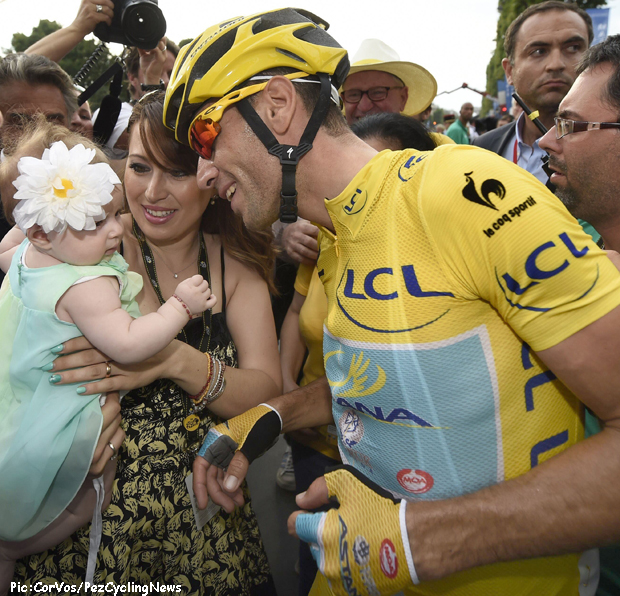 This has been one of the best Tours of recent years. Stay tuned for Ed’s report from the Champs Élysées in Paris.