Race Report: ‘One of the fastest sprints I ever did,’ the words of Marcel Kittel (Giant & Germany) after he’d made the rest of the world’s fastest men look flat footed in winning Stage Three of the 2014 Tour de France on the doorstep of Her Majesty the Queen, right outside Buckingham Palace in London.

Just a pity that Cav wasn’t here, albeit his team mate and ‘pilot fish’ Aussie, Mark Renshaw kept the QuickStep name to the fore with a sterling third place. In second spot was wily green jersey, Peter Sagan (Cannondale & Slovakia) who made no attempt to poke his nose into the wind and pass Kittel; happy just to draft the big German across the line and grab another big bundle of points – his third top four finish in three stages.

But back to the winner; ‘with 500 metres to go the biggest fight was already done; I’ve dreamed of this,’ he smiled at the finish after his second stage win in three days. 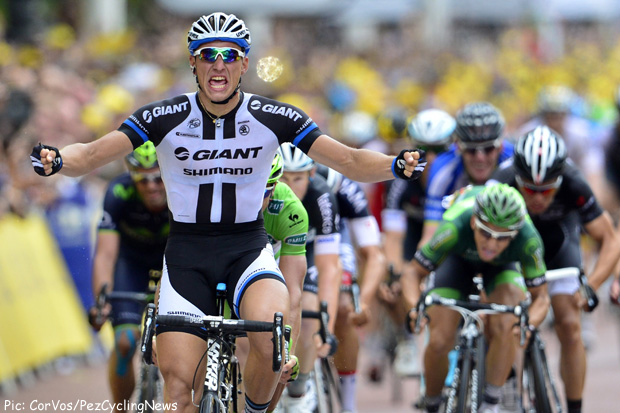 Giant was the only properly cohesive team on the run in; Lotto somehow lost their big strong German champion Andre Greipel in the whirlpool of a rapid finale over rain slick London streets and it was the men in black and white who dominated.

But Kittel’s ‘rocket sled on rails’ impersonation aside, it wasn’t the world’s most riveting stage albeit the huge crowds along the way and in London didn’t seem to mind. As with the first two stages some of the crowd have allowed themselves to get a little too emotionally involved in the race and it was Andy Schleck (Trek and Luxembourg) who came of worst of four riders who went down after a fan got too close to the action. But crash apart there was little to say on what will probably go on record as the least inspiring stage of the race . . .

‘The horror, the horror,’ the central character, Mr. Kurtz’s last words in Joseph Conrad’s famous novel Heart of Darkness; no, he wasn’t talking about a Grand Tour sprinter stage – but he could have been.

A flat stage, 155 kilometres from Cambridge – ‘City of Perspiring Dreams’ to London, where, according to Dick Whittington; ‘the streets are paved with gold.’ And yes, I’m padding already! 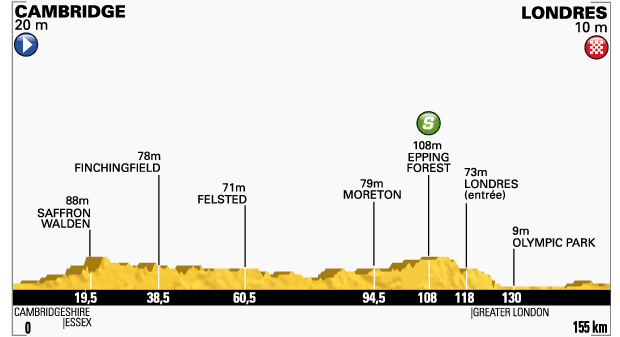 A two man break of Pro Continental boys, Jean-Marie Bideau (Bretagne-Seche Environmment) and Jan Barta (NetApp-Endura) went up the road from kilometre zero with Czech chrono strong man Barta only running up the white flag with six kilometres to go. That performance should certainly mean a few more jerseys sold for the Livingston, Scotland based clothing manufacturers.

Before The Start
On paper it looked like a straight shoot out between Stage One winner, Marcel Kittel (Giant & Germany) and countryman Andrei Greipel (Lotto). Kittel has won this year to date: three stages in the Tour of Dubai, the Scheldeprijs, two stages in the Giro, one stage in the ZLM Tour, and of course one Tour de France stage.

Out to prove me wrong will be F des J’s French Elite Road race Champion, Arnaud Demare – he was second in Gent-Wevelgem to another of those fast, hardy Germans, John Degenkolb (Giant) and won the ‘cult’ Belgian race, Halle-Ingooigem as well as stages and the overall classifications in the Dunkirk and Picardie Tours.

There’s another rapid Frenchman in the mix – Olympic Omnium silver medallist, Bryan Coquard (Europcar) with Etoile des Besseges stages and French Cup wins to his name in 2014. The winner should come from those four – it’s too flat, fast and not tough enough for the likes of green jersey wearer, Peter Sagan and Primavera winner Alex Kristoff (Katusha & Norway) but they’ll be in the mix somewhere.

The Business End Of The Race
It was inside 20 K before the peloton finally gave itself a shake – just before the rains came.

Astana were to the fore – keeping the maillot jaune Vincenzo Nibali up front and out of trouble; aided by Tinkoff, doing a similar job for Alberto Contador. That London tar looked SLIPPERY as the two escapees hogged that TV time with a vengeance and two-upped into the capital. 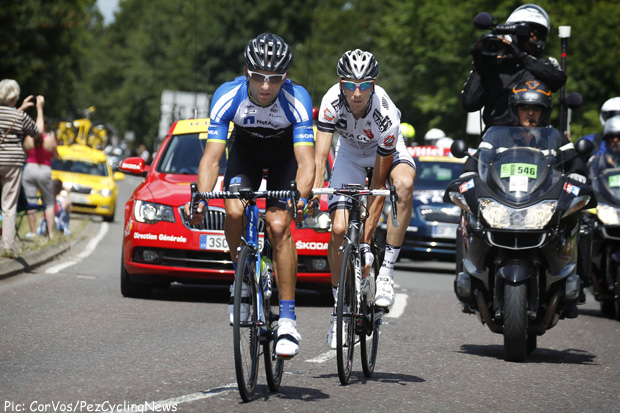 Barta and Bideau were the men for the break today

Lotto – for Greipel and Giant – for Kittel suddenly popped up inside 10 K to go as the two breakaways and then the peloton disappeared into the tunnel which dodges the London street furniture for more than a kilometre. When they emerged, it was Barta ahead of a crumbling Bideau with 15 seconds on a damp peloton where Tinkoff were still driving. It was only at six K to go when Barta surrendered – great job, Jan.

Five K and QuickStep took it on; is it for Petacchi? – a nice dream but Kittel and Greipel are just too quick for Ale Jet, these days.

Four to go and still the Belgians drive with Katusha creeping up – they don’t obviously believe me when I say it’ll be too fast for Kristoff.

Three to go and Giant take over to live up to their name; big men, big speed.

Two K and it’s still Giant drilling it with a huge spell from Degenkolb – he’s bestial out there.

Red kite and STILL Giant are in control with Sagan Superglued to the Kittel’s wheel as they flash past Buckingham Palace and hang right – he looks like a six day man in a Derny race with eyes only for the 50 mm in front of his front tyre.

Kittel still has one team mate, it’s Veelers and he’s still driving, driving – the rocket boosters ignite, Kittel floats off like an autumn leaf and Kittel launches. Ivan Drago – sorry, Marcel Kittel makes it look easy, Sagan doesn’t flinch, he knows how thick the air there would be out off the Giant giant’s back wheel.

Renshaw surprises as Coquard lunges to fourth and more points to go with those he took for third in the intermediate sprint behind the two breakaways. 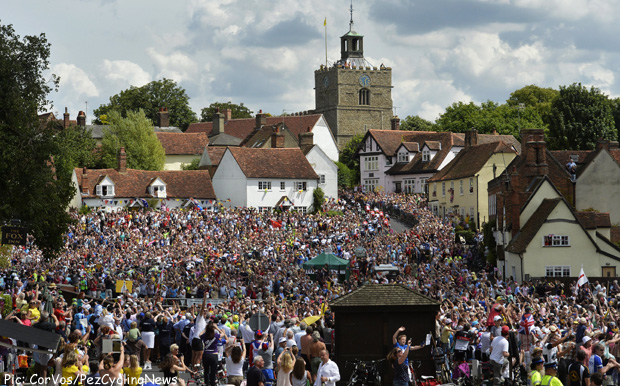 Another day of huge crowds followed the riders throught the stage

Another day of great crowds; crowned by an excellent demonstration of skill, speed and power from Kittel & Co. – and the Tour de France starts tomorrow.