Race Report: With the pain of the cobbles still in the legs of the pelotón from yesterday, stage 6 of the Tour de France could have been a rest day. The wind and rain put any idea of an easy time out of the question as crashes again played their part in the excitement. In the end a different German won!

A bunch sprint was the order of the day, but crashes, cross winds and a very technical finish made it very dodgy. After the four man break was pulled back there was no dominant team in the last kilometre and triple stage winner Marcel Kittel was not in position for battle. OPQS’s Michal Kwiatkowski went for a cheeky long one, but it was André Greipel who powered his way to the line.

The Course
Stage 6 from Arras to Reims was a day for the sprinters, but there were a lot of sore legs in the peloton that had to cover the 194 kilometres. Two small climbs: Côte de Coucy le Château Auffrique Cat 4 after 107.5 kilometres and the Côte de Roucy, another Cat 4, 37 kilometres from Reims. The finishing kilometres have nine round-a-bouts on the run in and is going to be very tricky. The last time the Tour came to Reims Alessandro Petacchi took the victory. 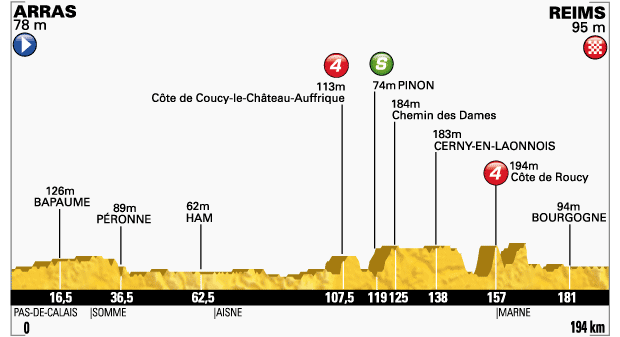 The Break of the Day
It didn’t take long before four riders were away: Jerome Pineau (IAM Cycling), Tom Leezer (Belkin), Luis Maté Mardones (Cofidis) and Arnaud Gerard (Bretagne Séché Environnement). They worked well together and after 15 Kilometres the lead was over 4 minutes. The lead fluctuated around the four minute mark as the Giant-Shimano team took control of the bunch for triple stage winner Marcel Kittel.

Tinkoff-Saxo team leader Alberto Contador lost two and a half minutes yesterday on the pave of northern France, but he still has time to give the camera the thumbs up and a smile after just under 50 kilometres had been covered in the first hour. Chris Froome was the only abandonment in stage 5, but there are a lot of bandages to be seen in the peloton. One of the worst affected is John Degenkolb who has a torn gluteus maximus muscle, but he is soldiering on.

Giant-Shimano put their Chinese rider Cheng Ji on the front and he was personally keeping the lead at 3 minutes as the race came into the last 100 kilometres.

100 K’s to Go
Just after the feed zone the lead was just under 3 minutes and the race had settled into the usual steady chase, but not catch. 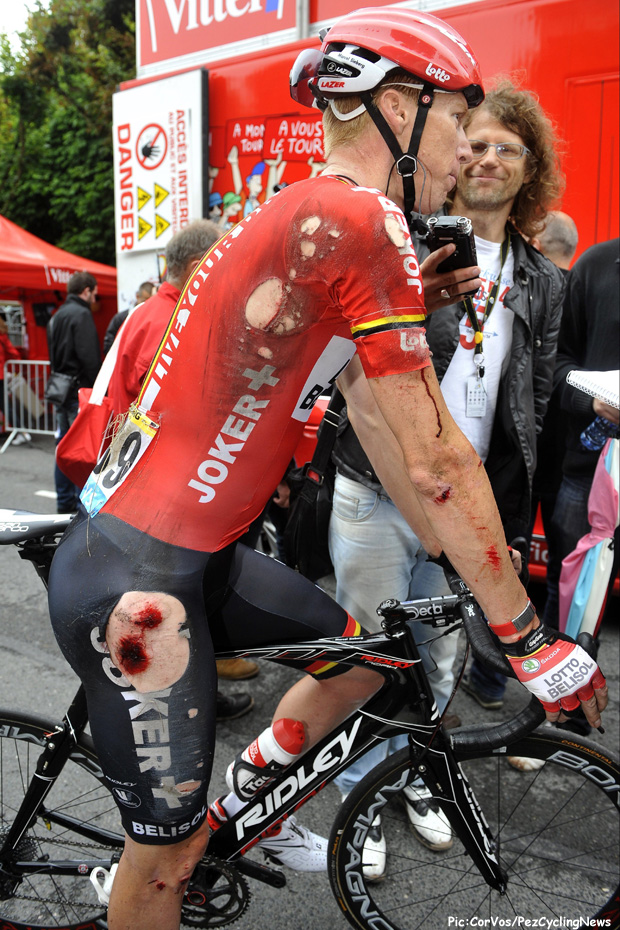 Lotto Belisol’s Marcel Sieberg was one of the crash victims

5 kilometres before the intermediate sprint there was a two big crashes and over 20 riders must have hit the ground between the two pile-up’s. Sky’s Xabier Zandio came off the worst and abandoned with a suspected broken collar bone and Egor Silin of Katusha also joined him in the sag wagon.

At the sprint; 75 kilometres out, Leezer was first, but there was no competition.

10 kilometres further down the road and the wind changed direction; Omega Pharma – Quick-Step went to the front and the pace lifted. The panic in the bunch caused another flurry of crashes, this time a Tinkoff-Saxo rider went down hard, it wasn’t Alberto Contador, but it was hard to say who it was in the dull conditions. It turned out that the Tinkoff rider was Alberto Hernandez and he abandoned with concussion.

The sudden speed change and the crash split the peloton, but a cease fire was called and everything got back together, as the lead had come down to 38 seconds with 55.5 kilometres to go. The move from OPQS had not achieved much and Giant-Shimano came back to the front and the four leader’s advantage rose again. Tinkoff-Saxo and Astana joined Giant-Shimano at the front to calm the peloton and hopefully cut the chances of more crashes.

The break hit the Côte de Roucy with a lead of 47 seconds. At the summit; Maté took the 1 point on offer which helps his Cofidis team mate and KOM leader Cyril Lemoine in the KOM spotted jersey for another day. 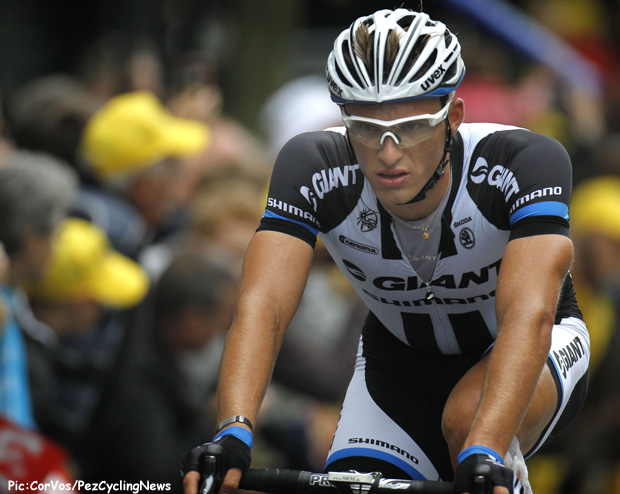 Not a great day for Marcel Kittel

Into the Last 30 Kilometres
Cheng Ji had been left on the front as the leaders had 32 seconds, 10 kilometres later and it was 10 and then at 19 out Maté and Pineau jumped as the bunch snapped at their heels. Maté wanted to be the last man to be caught, so dropped Pineau.

The Spaniard had no chance to cover the last 15 kilometres on his own, but he gave it a good go as OPQS, Lotto Belisol and Tinkoff-Saxo thundered after him.

Maté was reeled in with 11.7 left to go as World time trial champion Tony Martin was at the pointy end of the peloton, but the wind was coming from the rider’s right, so echelons started to form. The top men on GC had been ready for the split and were to the fore, the obvious loser was French national champion Démare (FDJ.fr) who was in the large group off the back.

OPQS towed the race under the 5 kilometre banner at a fast pace and into the technical finish. Cannondale, Europcar, Trek and Katusha wanted in on the action and the pushing started as Kittel was distanced at the back.

A big attack from Kwiatkowski came at 800 metre’s out and looked fast enough to hold on for the win. Europcar slowly pulled him back for Coquard, but this played into the hands of André Greipel who engaged overdrive to plough a solid groove all the way to the line holding of Alexander Kristoff (Katusha), Samuel Doumilon (Ag2r-La Mondiale) and Matt Renshaw (Omega Pharma – Quick-Step). 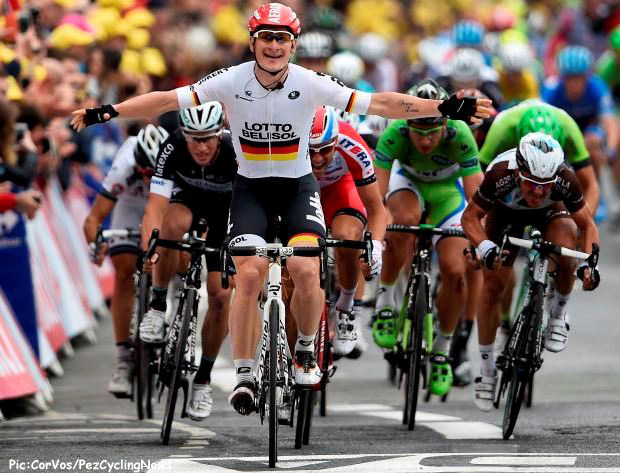 After the finish Greipel said “it was a difficult finish, but a lead-out train was not necessary although I had a battle with Renshaw. At around 500 metres I decided to give it everything.”

Today was not a rest day after the cobbles, but with the climbs coming at the weekend, Friday could be the day for a successful break.

The overall stays the same with Vincenzo Nibali in Yellow. Nibali said after the finish: “Today was a very nervous day, but my team kept me safe. It was a sort of rest day, but we needed to be careful, tomorrow will be the same.”

Keep it PEZ for all the action from the roads of France.