Race Report: On the day most of the riders were scared of, it was the Italian Champion and current Yellow Jersey who took the race by the scruff of the neck and blew the parcours apart. Atrocious weather, a favorite abandoned, riders gapped but the strongest man was Lars Boom (Belkin) who showed all of the other Classics specialists how to ride the cobbles in the wet.

We’ve had three hard days in England and what should have been a bit of a soft introduction to France yesterday but turned into a day of crashes and retirements. Today, though, is the one they all feared as it went over the cobbled roads of northern France and Belgium and was sure to put some of the lighter riders under pressure.

The favorite for this year, Chris Froome (Team Sky) came off yesterday and finished the stage with a brace on his wrist and created a lot of speculation over how bad the injury actually was. With Andy Schleck (Trek Factory Racing) having failed to start, Fabian Cancellara was given a free hand and now got a chance to make up for missing the win in this year’s Paris Roubaix…but he’d have to beat Nikki Terpstra (OPQS) and the other ‘specialists’ to do it. 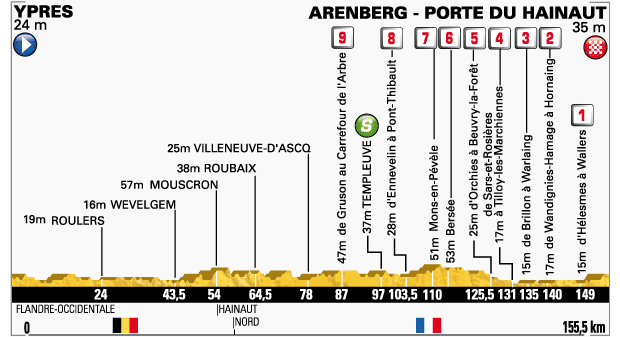 Sections 5 & 7 were taken out due to the rain

Weather Watching
The big news at the start of the day was that the rain was pouring down and teams were worried…well some of them. The organizers decided, in the interests of safety, to remove sections 5 and 7 from the nine planned cobbled sectors of the stage. This meant a reduction of 2.4 kms of the rough stuff but still left another 13 kms to be tackled.

Some riders, the lighter climbers and GC contenders, were happy but some of the Classics specialists like Sep Vanmarcke (Belkin) took to Twitter to ask ASO to run the full course but with the disputed sectors actually underwater the organizers weren’t about to oblige him.

Breakaway and Crashes
Pretty much straight from the flag a group went away and eventually formed up, although riders seemed to come and go before it settled down. At the other end of the field Chris Froome was again on the ground and had to wait for service so was behind by 1:30 when he got going. Several of his teammates dropped back but the big help came from a bit of team-car pacing that will now be investigated by the race commissaires. The peloton didn’t try to take advantage but Froome’s confidence would have suffered.

As they crossed back into France with 92 kms to race the leaders had 3 minutes and the bunch was taking it relatively easy in preparation for what was to come. Another crash at the back involving Andre Greipel (Lotto Belisol) saw a small group chasing and then Marcel Kittel (Giant-Shimano) hit the deck going through a roundabout.

Carrefour de l’Arbre
As the bunch headed towards the first cobbled sector, the main teams all moved through to the front. Cannondale was leading with BMC, Astana and Movistar all attentive but Sky left it late to bring Froome forward. Another roundabout and another crash with Rojas (Movistar) falling and Tejay van Garderen (BMC) being delayed.

The riders were taking risks to stay near the front and there was carnage. Another crash, a split at the front, Valverde (Movistar) chasing with Rojas’ front wheel and BOOM! Chris Froome was on the deck again and was obviously in a lot of pain. He hit the kerb when he fell and it was all over as he climbed into the team car and abandoned unable to hold onto the bars of his bike. The talk will be lively on social media tonight about the non-selection of Sir Bradley Wiggins as Team Sky now don’t appear to have a GC contender…unless Porte or Thomas take their chance.

The leaders were on the cobbles with a 2-minute advantage as the bunch had lined out to enter the first section. Lars Boom (Belkin) stretched out but Contador (Tinkoff-Saxo) and Nibali (Astana) were well up and looking comfortable. 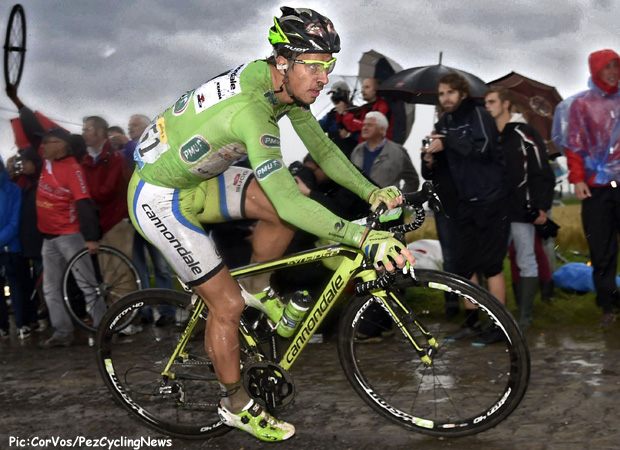 Cannondale’s Peter Sagan said after the finish that he was pleased and disappointed!

Sprint Point Templeuve
As the break sped towards the day’s sprint the groups that had been spread over the road were slowly coming back together. Alejandro Valverde and Tejay van Garderen (BMC) had been chasing the Sagan/Contador/Nibali group at 40 seconds but they managed to drag it back.

Westra led through the sprint point and the Cannondale team brought the bunch through but Sagan didn’t even try to come out and take the 8th spot. Everyone was looking toward the next section at Pont Thibault.

Contador was taking it steadily through the section but as the group split he found himself at the wrong end.

Vanmarcke was pushing and Nibali had seen the split and was helping out as he sought to distance the Tinkoff-Saxo leader. This turned out to be the move of the day and the wily old fox that is Nibali had read the race correctly. 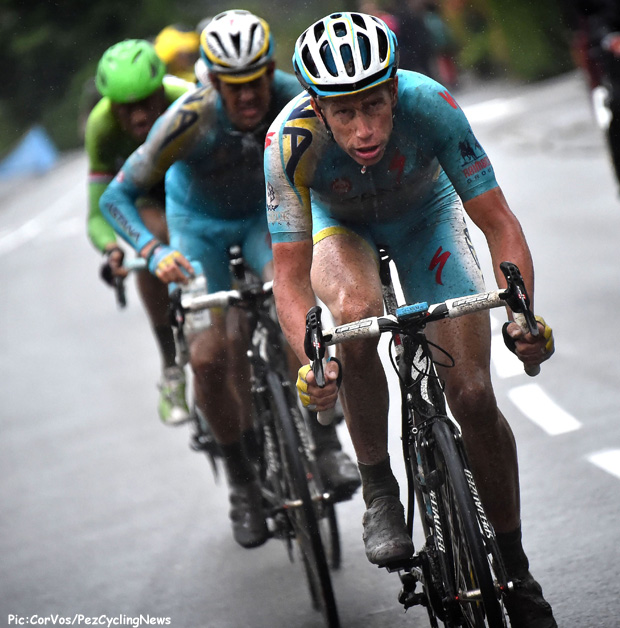 The Astana team split the race for Nibali

Bersée
A left hand corner and Talansky (Garmin-Sharp) and Van Den Broeck (Lotto Belisol) went down with the Belgian rider going over the bars.

Off the cobbles and one of Nibali’s teammates crashed right in front of the Italian but he managed to escape going down himself. Heinrich Hausler (IAM Cycling) also crashed as Boom and Vanmarcke pushed ahead of the race leader. There was so much going on that we almost forgot about the front of the race where the break was now down to six riders with Taaramae having dropped back.

Nibali had a gap on Contador of just over a minute and was pushing his advantage in an attempt to take as much time as possible, especially now that Froome had abandoned.

Into the Final 30 kms
Contador had not panicked and had pulled his teammates around him and was now sitting 50 seconds back from the Nibali group as they were about to pull in the breakaway.

The leaders were overhauled by the Nibali group at 28 kms to go and the Tinkoff-Saxo riders were trying to use the flat sections to reduce Contador’s deficit. With only 16 kilometres to go and four more sections of cobbles it would be a big ask.

Onto the sector at Tilloy-les-Marchiennes and we essentially had three main groups: the Nibali group of 16 riders with Sagan and Cancellara, a group with Talansky and Van Den Broeck at 40 seconds and a group with Contador another 25 seconds back.

Nibali was now the only GC contender in the lead group and as they came off the cobbles Lars Boom began to push again, this time aided by Sagan as Cancellara lost a little ground. This push had stretched the gap to the following groups as Sagan tried to force the pace and head for home, hoping to take Yellow. Nibali though was not giving in and was fighting to stay with him.

Looking for Two Seconds
Sagan was motoring as he only needed to gap Nibali by 2 seconds to get Yellow but the Italian champ was holding on. This meant that he now had a gap of 2 minutes over Contador. With the second last section of cobbles being almost 4 kms long we were waiting for the attack to come. But who would it be?

Tejay van Garderen was with Contador and they were working together to limit the deficit to the lead group.

Nibali had two teammates with him and they were pushing hard trying to take more time from all of the riders behind. If it came down to a sprint then it was possible that Renshaw (OPQS) might finally get the win as he was still with the lead group.

Geraint Thomas (Team Sky) attacked from the Contador group taking his new leader Porte with him as they sensed that the Spaniard might be struggling.

Astana Answer Vinokourov’s Criticism
Nibali’s teammates had pushed so hard that as they came off the cobbles they had actually forced a split with only Boom and Nibali being able to follow.

Riche Porte had made contact with the Talansky group and was taking time on Contador and Valverde as up ahead Sagan and Cancellara tried to pull back the Astana leaders. Westra had given everything for his Italian captain and had now slipped back. 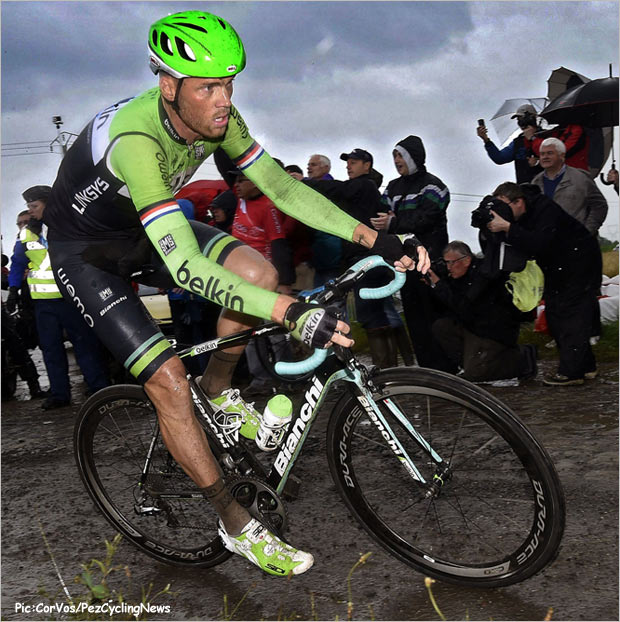 Onto the last section of cobbles at 6.6 kms to go as Lars Boom took off for home. Nibali was desperately trying to hold him but with Fuglsang suffering they had to let Boom go. Boom had the gap but Fuglsang was doing a fantastic job for the Yellow Jersey and they were still ahead of the Sagan group by 34 seconds with the Talansky group at 2:04 and the Contador group at 2:30.

Thomas was again trying to drag Porte away from the Talansky group to get more time as Team Sky reverted to Plan B. Talansky then attacked the group and tried to get to the Sky riders. Behind, Contador was being dropped from his own group as he struggled.

Final Kilometre
And now the Dutch rider headed up the finishing straight only showing that he knew he had the win at 500 meters to go. What a win for the former cyclocross rider but the performance of the day was Nibali coming across the line just behind Fuglsang and putting massive time into his rivals. Sagan took the sprint ahead of Cancellara with riders all over the road. Porte had pulled himself almost up to the group ahead, then Valverde with his group and finally Contador finishing another 20 seconds down

From a two second gap at the start of the day Vincenzo Nibali now led the Spanish favorite Contador by almost 3 minutes…a tall order for the man from Pinto to find in the mountains. 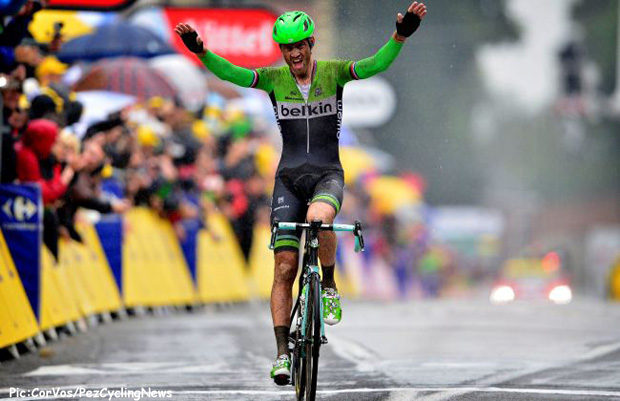 A big win for Boom, Holland and Belkin

The day belonged to Lars Boom as the first Dutchman to win a stage since 2005 and Vincenzo Nibali who showed the other GC riders, and a few of the ‘specialists’ how to attack a race.

Keep tuned to PEZ for Lee’s Lowdown up soon.

Contador on the summer day in hell: I cross my fingers