“TP For Sale”: Inside Langkawi 5

– By Al Iacuone –
Today I had to privilege to know what was going to happen before the start. I was talking to Brownie (as in Graeme Brown – 2nd place 2 days straight) and he said he was going to win by a length. I didn’t like to hear it because our team must get its results from being in the right break. But he more then lived up to his word. After an awesome lead-out by Brett Lancaster, my teammate last year at iteamNova.com, Graeme Brown won by about 4 lengths. He beat his own teammate Ruben Bongiorno who beat the number 3 by another 2 lengths. With Burt after bringing them to 100 meters to go still getting 6th. 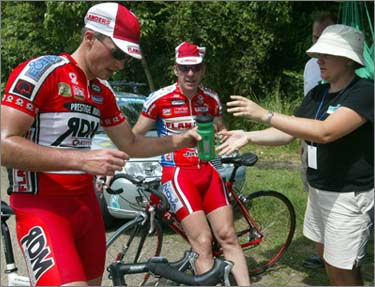 A truly magnificent sprint by the Ceramiche Panaria team, but much of it is due to the fact that they were the only team that managed to stay together in a dangerous corner with about 2,5 km to go. Today was a blistering stage both in heat and speed. Our team all tried to get in the breaks but it wasn’t to be. The only break we missed turned out to be the one they let go. But they were caught anyway so that’s not too bad. Saved the energy for another go tomorrow.

The chances for a successful break are growing. The Saturn team is getting tired, at the end of the stage most work was done by Yellow Jersey Nathan O’Neill himself. Because there was a dangerous man in the break with Baliani who was only 51 sec behind on GC the sprinters teams left it till late in the stage to give them a hand. Today they actually got a hand from Columbia-Selle Italia who wanted to defend their GC chances. But there is another reason for the absence of the sprinters teams.

A lot of riders, among them almost the entire Lampre team of Pagliarini, have caught a stomach bug. And there was heavy traffic at the rear of the bunch as riders kept stopping to relieve themselves. I reckon that a guy selling toilet paper behind the bunch could have made a fortune today. I can only say that this can influence the racing in the days to come. And maybe we have more chance for success with Flanders-iteamNova.com because at our team only the staff is affected at the moment.