The first week of the 2013 Giro gave me a chance to see a lot of new parts of Italy, I covered over 1800km, and after the stage 8 TT I was just a 45 minutes drive to Riccione – another part I’d not seen before, and a chance for a short stay (and ride) at another fantastic bike hotel – the Hotel Dory.

Hotel Dory is one of our partner hotels in our Win Two Weeks Riding In Italy Contest. I wanted to see their operation for myself, and am convinced you’ll be as happy staying with them as I was. In the interest of full disclosure – they did pay for my one night’s stay, but they did not pay for this editorial.
– Richard Pestes 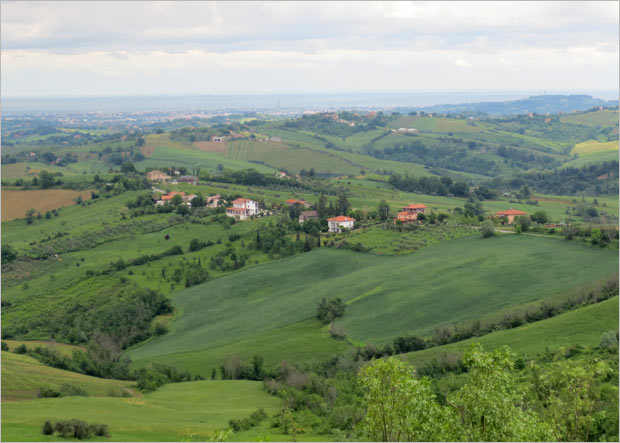 Here’s a view east to the Adriatic Coast and Riccione in the distance.

If it’s your first stop, getting there is easy too – Riccione is less than two hours straight down the A14 autostrada from Bologna – which is an excellent airport because of its medium size – big enough for international flights, small enough to get through quickly. 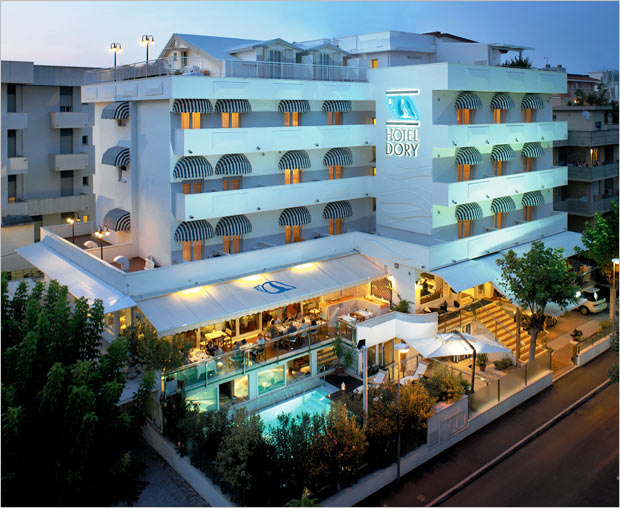 The Hotel Dory is just a few minutes off the highway, and only a block from the beach, which is wide, sandy, and the place the Italians come in the summer (a sure sign of quality). 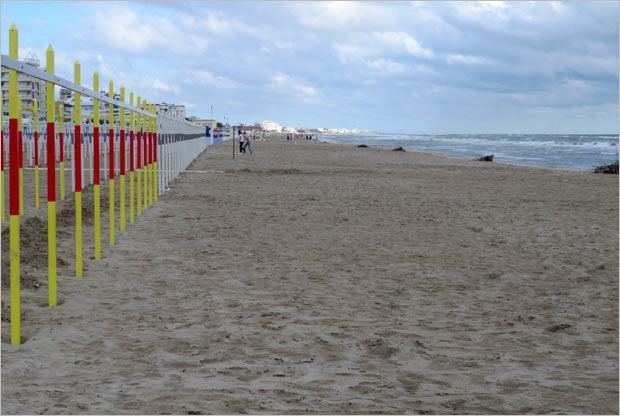 The beaches are wide and long – and although this day in May started with some rain, it soon cleared and it’s easy to see why the summer months are packed with sun-seeking Italians.

The wide long beaches here make this a popular spot with Italians, who’ve been coming here for ever it seems. The town is filled with hotels, and Hotel Dory has been a part of the scene for years. Like all the best places to stay – it’s family owned and operated – now being run by Stefano Giuliodori, but started by his father. The hotel name comes from the last part of his surname.

I arrived after another long day, and a series of long days chasing the race – and by that I mean tired, thirsty and in need of a shower – the kind of mood that can be easily tipped either way by the hotel staff. 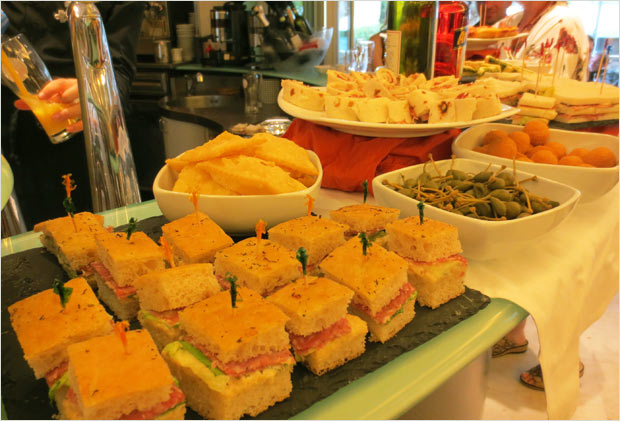 The snack spread at cocktail hour is impressive, even by Italian standards.

I was immediately struck by the welcome I received from every one of the hotel staff. I know that’s a big statement, but it’s true. Yes, they were expecting me (the ‘journalist!’), and I’d guessed they’d been alerted to my arrival by Stefano – but I soon saw the same eager attention paid to other guests too. And after my stay and meeting other members of Stefano’s staff, my impression was that they’re a happy group who really like their jobs, and working together. I went so far as to compliment Stefano on the quality of his people – and when you’ve seen as many hotel staffs as me, it’s easy to tell the happiest are also the best. (I stayed at 7 other hotels just on this trip). 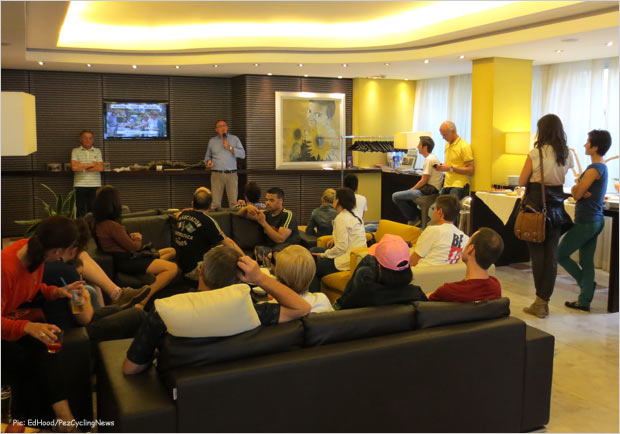 The hotel is modern but welcoming – the lobby opens onto a large open air bar lounge area that makes the most of the warm weather, and my arrival timed perfectly with the evening’s welcome meeting for guests who’d booked in for the week’s cycling package. The lounge area was filled with fit looking guests, the barman was busy pouring drinks, and Stefano was at the front explaining via big screen the various ride plans for the days ahead. I was struck by how international the group was – many guests from northern Europe, as well as England, the US, Australia – and even a couple other Canadians – it was clear I was tapping into an already popular operation here. 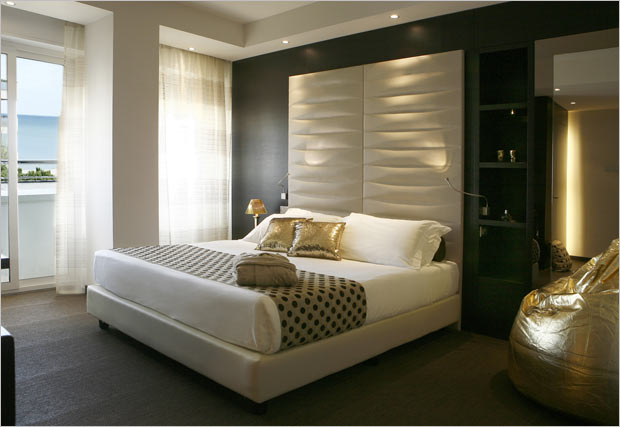 My own adhoc survey of how guests chose Hotel Dory revealed that word of mouth, recommendations from friends, and repeat visits were the most common – and that says a lot.

This time allowed for only a 24 hour stay – but long enough to stay the night, eat dinner, breakfast and lunch there, and take in a group ride – enough to offer my own review. 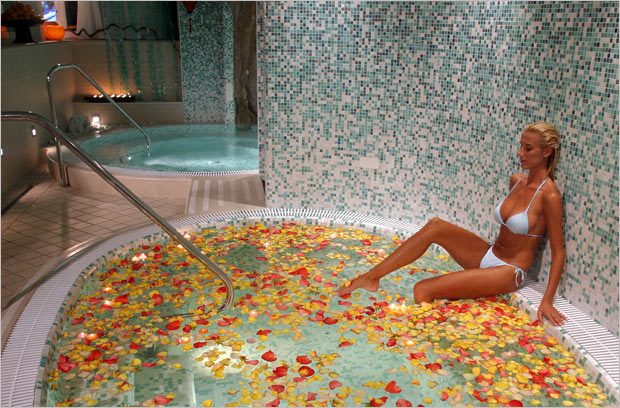 Meals are served buffet style in the hotel dining room – and prepared on site by the hotel’s chef and staff. Menus change daily, but the huge variety of olive oils was a welcome constant – I made sure to indulge in several with dinner and lunch – both on my salads and also just poured onto a plate to dip the bread (another thing Italians do better than most.) Dinner and lunch include a lot of choices geared to fueling up for the long rides, and recovering after – salads, fresh vegetables, fruit, pastas of course, chicken, fish, – -carne – it’s all here and so easy. 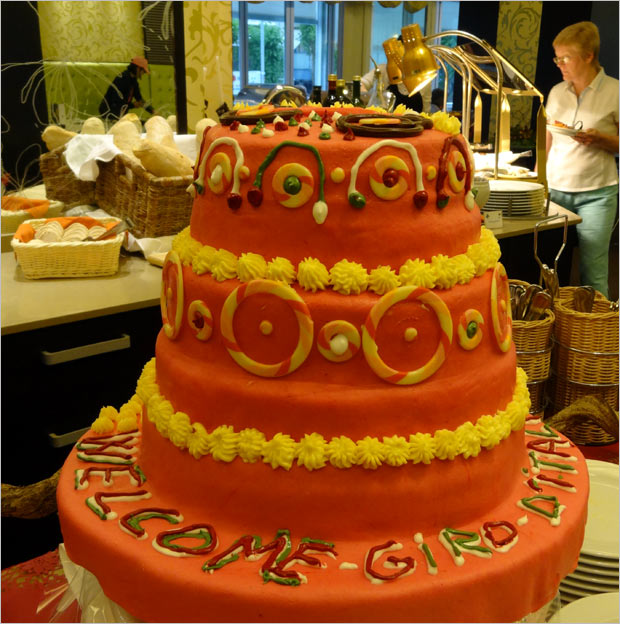 This night the room was packed and buzzing with the anticipation of a full week of awesome rides ahead. I also took note of how many returning guests came over to say hello to Stefano – it really looked like a room full of old friends. Another good sign.

The staff all speak English so even the most linguistically challenged (or linguistically lazy) among you will get by. But be certain – we’re not in Kansas anymore – which is why you go in the first place – to see how the Italians do it – whether for your first time, or because you’ve been before and can’t wait to get back there.

Rides are geared for all levels – from the fast guys right down to someone who’d prefer an electric bike (Hotel Dory has a whole fleet of them) – so there’s no excuse to leave your non-cycling better half at home. 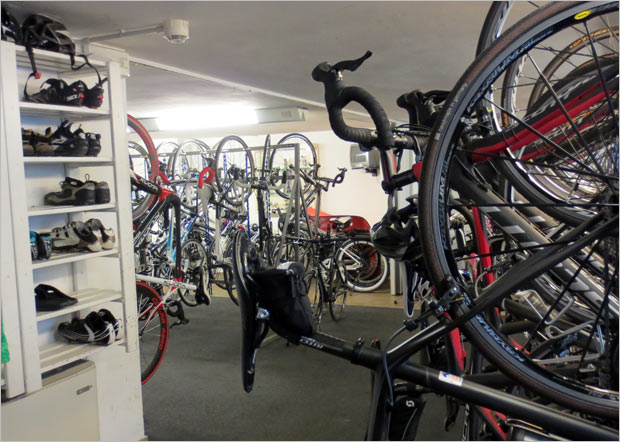 The fully secured bike room in the basement had a selection of bikes bigger than many shops I’ve seen, and while a lot of you will want to bring your own ride, the fleet of Scott road bikes here makes a tempting alternative to the hassles of flying your own bike over. There was a time I thought I couldn’t enjoy the big rides of Europe on a borrowed bike, but after factoring in bike build-unpack-buildup time, a couple of 100euro+ airline charges and lost bikes, and it didn’t take me long to get over myself. Add in the reality that Hotel Dory’s bikes for rent are actually top quality machines and the trip logistics just got a whole lot easier. 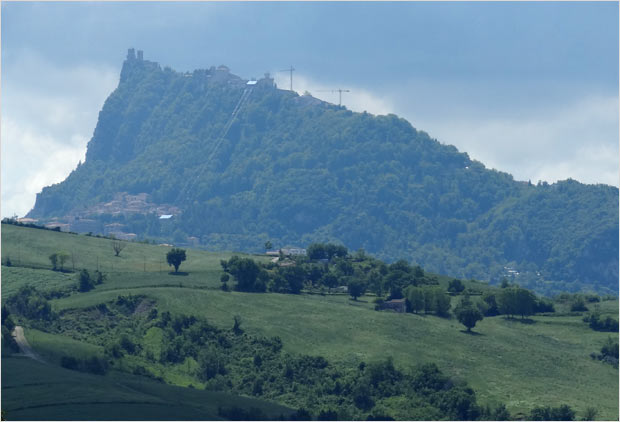 The Republic of San Marino sits majestically nearby.

The Sunday ride left promptly at 9:30 – and it should be noted that riding at civilized times is the norm over here. The week’s “queen stage” rolls earlier because it’s a long one, but today we were slated for just 85km through a mix of flats, rolling hills, a couple of medium climbs (the longest was 4km), and at least one coffee stop in a picturesque town. 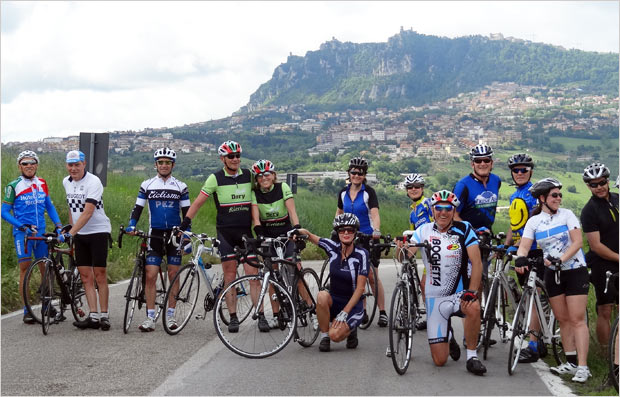 There were 3-4 groups of various levels today, and the groups seemed to be around 8-12 rider in each, with 1-2 guides per group. Being on the coast offers up the Italian standard of excellent roads – with everything from flat beach cruises to climbs that Marco Pantani used for training – his hometown of Cesenatico is just a few kms north of Riccione. 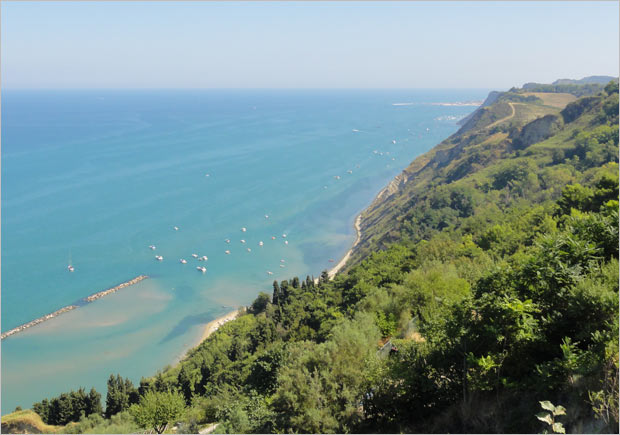 Getting out of town requires a few kms of mixing with cars and other vehicles, but after an easy 30-40 minutes we were into the quieter roads that weave across the land in all directions. We rode into the Republic of San Marino – and while we didn’t tackle the climb to it’s 749m top, it’s only about 10km from the coast – so easily reachable. 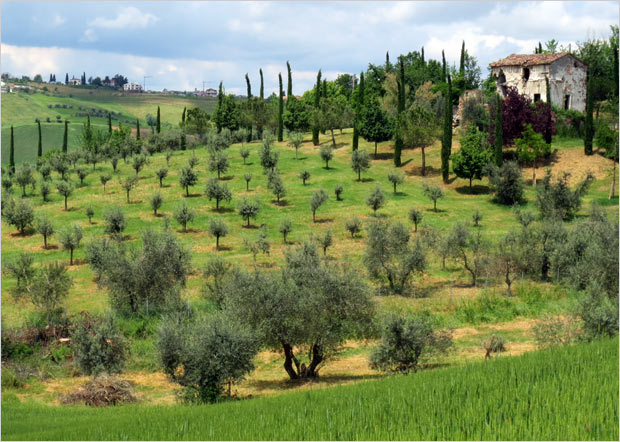 While I had only enough time to take in this one ride, which did offer up some amazing views of the hills, country roads, and distant seaside – it was again the Hotel Dory’s staff who made the biggest impression. 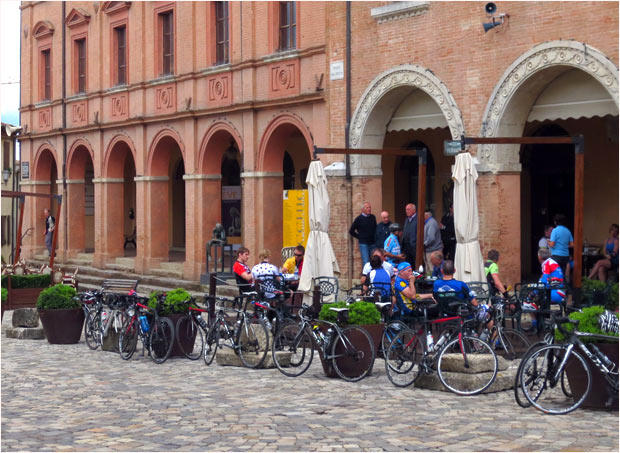 Dropping out of the town of Verruchio after a coffee stop in the town’s piazza (which was thoroughly relaxed an this Sunday morning), I stopped to take a few photos and lost contact with my group as we descended to the valley below. I didn’t think too much of it since a quick phone call to Stefano confirmed his group would be along in a few minutes, and I could always aim for the coast if needed. 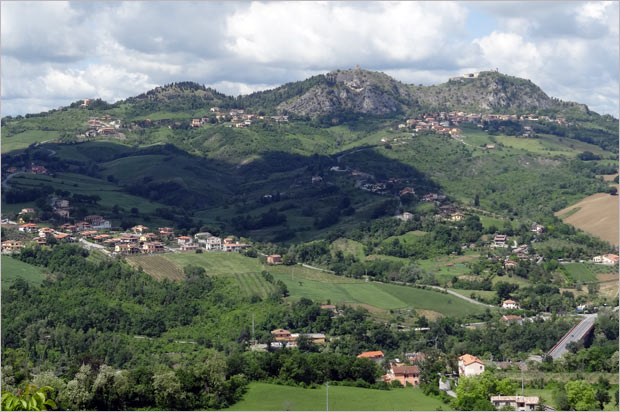 But only later, back at the hotel, I learned of the scare I’d given my own group’s guide Silvano cause for concern – who stopped the group and rode back up the climb to find me. I scolded myself for not getting his cell number before the ride, (just in case), but it was comforting to know that the staff was looking out for me. And that’s the kind of attention that for me makes all the difference. 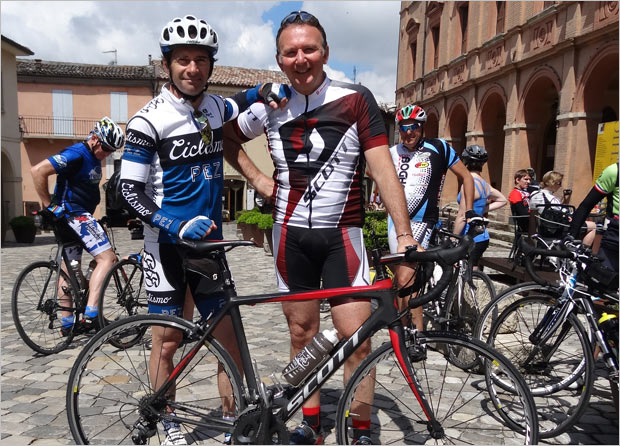 • Get more info and check out their cycling packages at HotelDory.com