Our roadside reporter Ed Hood’s annual pilgrimage to the beautiful & romantic canal city of Venice somehow managed to turn into a flirtation with his favorite subject – cycling. Here’s Ed’s report on this truly magic city through his cycling addicted eyes. 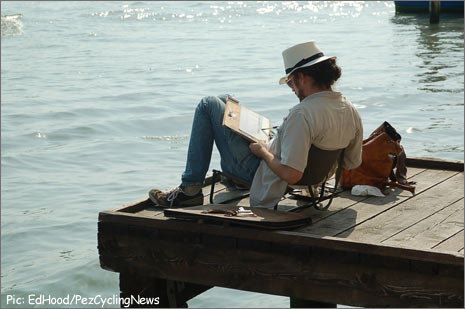 There are artists everywhere. And there are works of art too; you can’t avoid them. 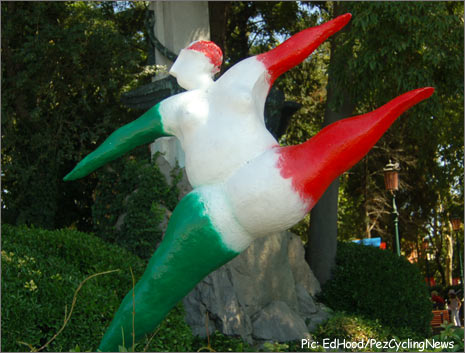 There’s a jolly tri-coloured sculpture in the Bienniale Gardens. 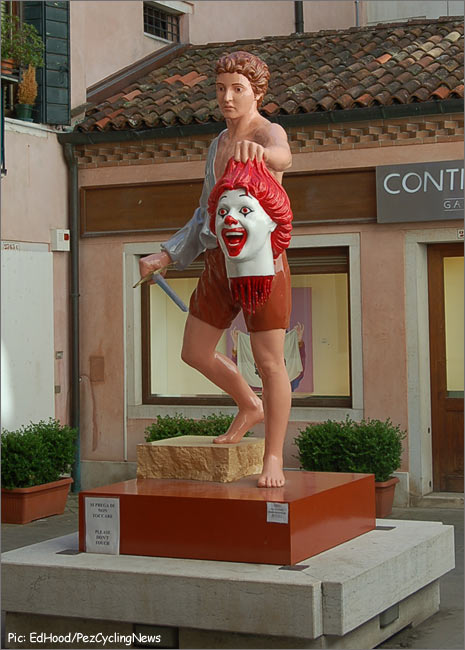 Not to mention garish, ‘ironic’ glass fibre modern art in the courtyard of trendy galleries. 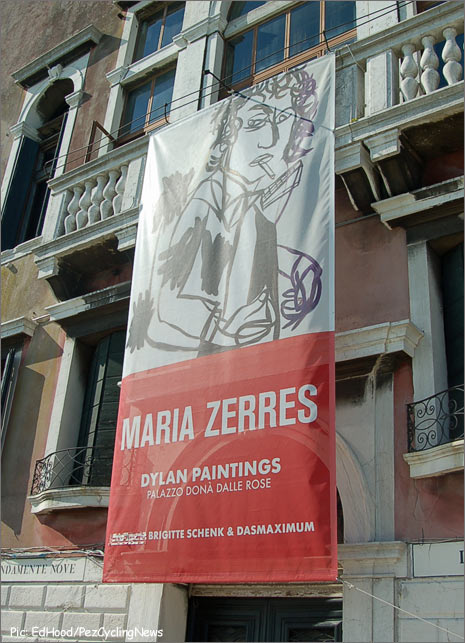 And there are tributes to modern legends held in beautiful old palazzi. 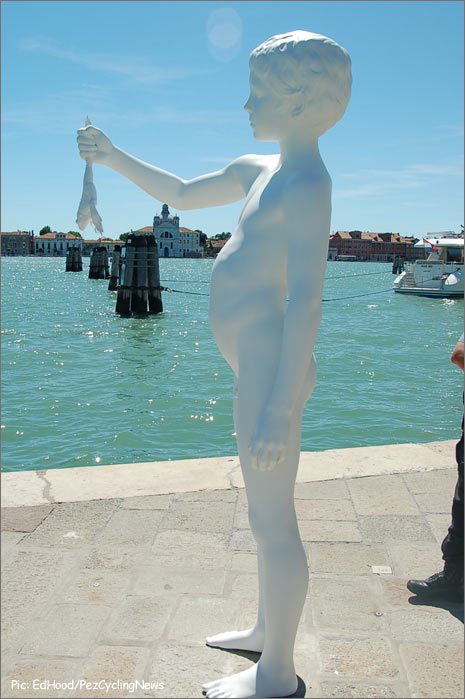 But you can still find sleek marble statues which owe much to the old renaissance masters. 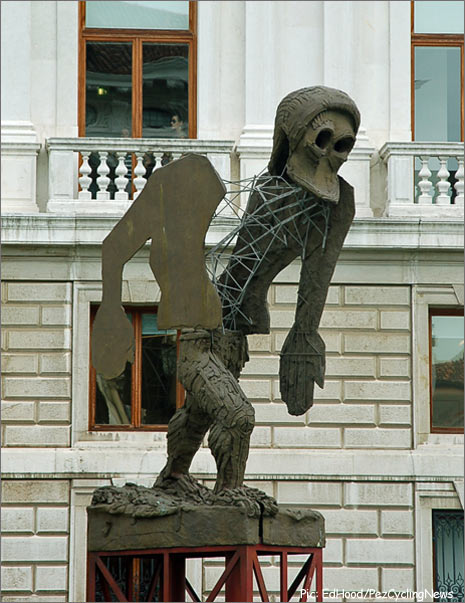 And nightmarish monstros in modern materials – but you wouldn’t want to avoid any of it, not if you have human curiosity and a soul.

There aren’t many bicycles though, in this city on the lagoon.

But however hard it is to believe, the Giro ran a time trial straight into the heart of Venice in 1978, stage 14 over 12 kilometres.

Across the Mestre causeway which is the road and rail link with the mainland; down through the seaport and then along the narrow Zattere wharf – whizzing over plywood ramped bridges in the pouring rain on their single ringed, silk tyred time trial ‘specials.’

Then hanging a 90 degree left across the narrow alleys of the Dorsuduro ‘sestiere’ (district) from the Giudecca Canal to the Grand Canal. And really that should have been an end of it – but legendary Giro organiser Vincenzo Torriani had that one figured out. He had a pontoon bridge floated across one of the world’s busiest and most famous waterways. 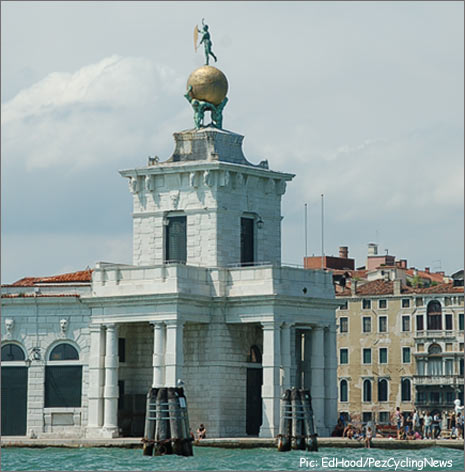 From the famous customs house topped with it’s fabulous golden globe. Across to Piazza San Marco; with Saronni, Moser and Visentini whizzing between the San Marco lions and then the Campanile and Doge’s Palace into the Piazza before braking hard to avoid running into the rain-sodden crowd.

Moser won in 16:11 for the 12 K in what must be the world’s most extraordinary time test? 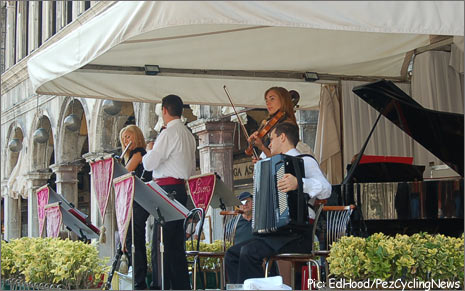 Where normally the orchestras plays for the tourists and the pigeons beg for seed, the ‘Bigs’ had to brake hard to avoid running into the crowd – surreal.

But on my annual pilgrimage to this beautiful, unique and hideously exploitive city – the down side of having a woman with good taste – I was intrigued by a poster which I kept seeing. 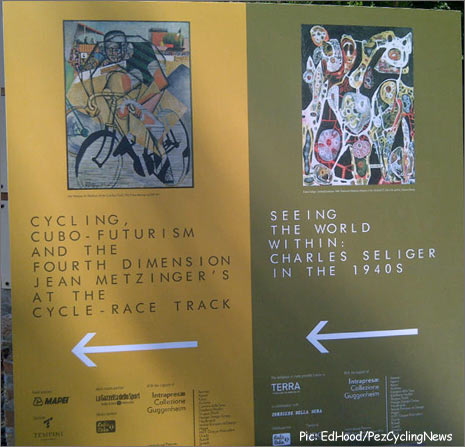 ‘Cycling, Cubo-Futurism and the Fourth Dimension, Jean Metzinger’s At the Cycle Track.’

How could a man resist? 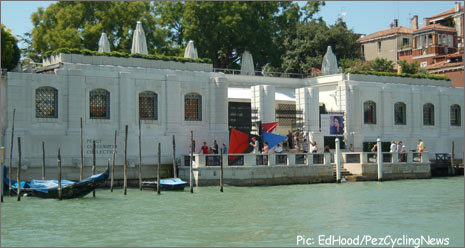 The venue was the Collezione Guggenheim – former home of the millionairess art lover Peggy Guggenheim who lived in the beautiful Palazzo Venier dei Leoni on the Grand Canal until her death in 1979. 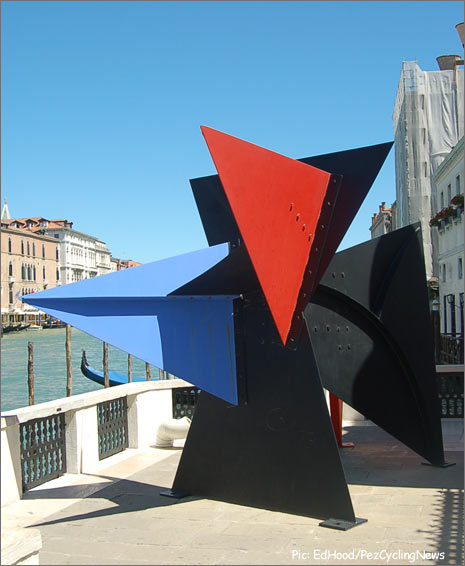 The palazzo is hard to miss from the water, there’s always a monumental art work on the terrace – this time it was a steel creation.

We pay a visit every year, Marlene isn’t crazy about modern art, but it’s not every day you get to be in a room full of Jackson Pollock’s finest work. 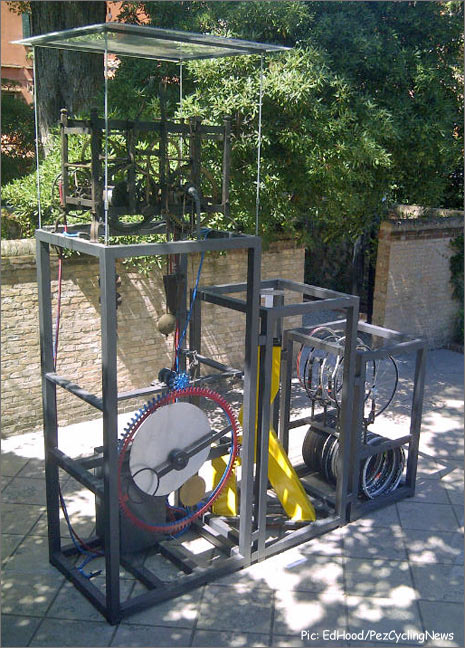 Waiting for us in the courtyard under a hot Venetian sun was ‘Cyclosna’ by Paul Wiedner a sculpture, or perhaps ‘mobile’ is a more accurate description; involving iron, electronic components, electric motor, tower-clock, gas and mixed media – as well as bike wheels and tyres

It certainly caught the eye, even if it did look like a Mavic test rig. 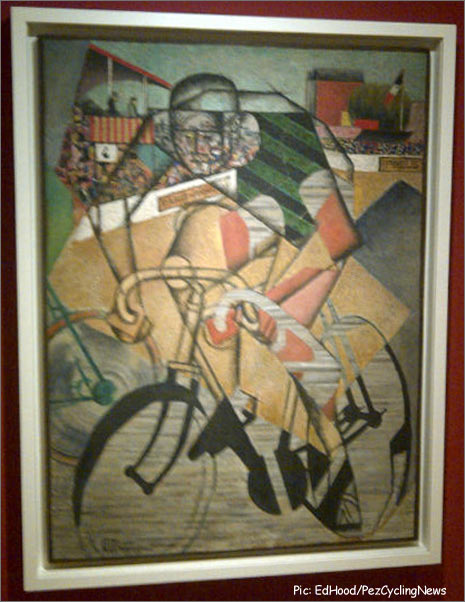 The central point of the exhibition was a painting by Frenchman Jean Metzinger called, ‘At the Cycle-Race Track’ – in oil, sand and collage on canvas.

Born in Nantes in 1883, he was ‘Renaissance Man;’ not only did he paint he was a theorist, writer, critic and poet. He was a leading light in the ‘Cubist’ movement, pioneered by Picasso and Braque.

The simplest description of this form of art that I’ve seen is; ‘In Cubist artwork, objects are analyzed, broken up and reassembled in an abstracted form — instead of depicting objects from one viewpoint, the artist depicts the subject from a multitude of viewpoints to represent the subject in a greater context.’

But the painting also leans towards the Italian ‘Futurist’ school which celebrated modernity – the city, air travel, motor vehicles and speed.

Metzinger’s rider on the Roubaix track certainly fits in with that – he’s travelling so fast that we can see through him. 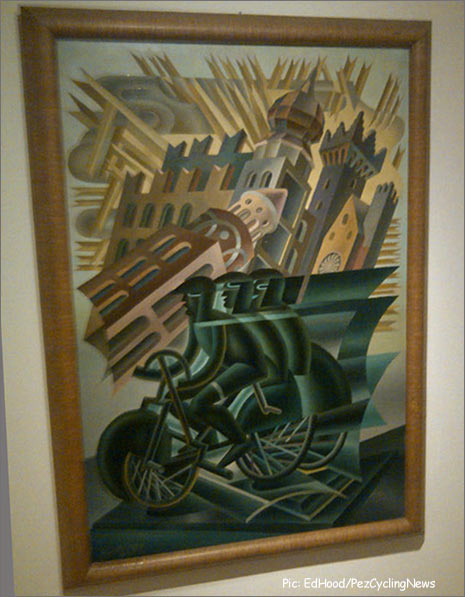 There were Futurist paintings on display; a cyclist flies through a city where even the buildings can’t stand still. 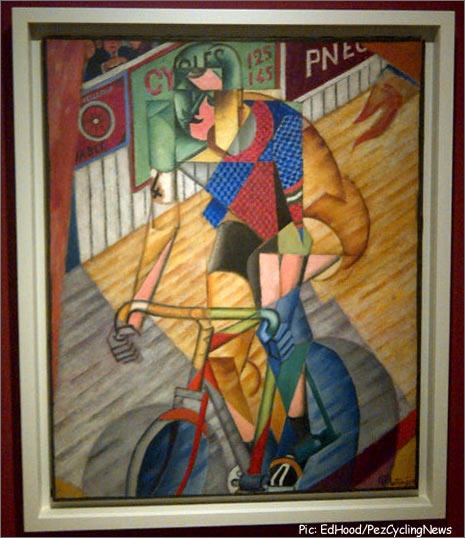 Bohr was one of the principle founders of quantum mechanics and the Cubist concept of a ‘fourth dimension’ was one which fascinated him. 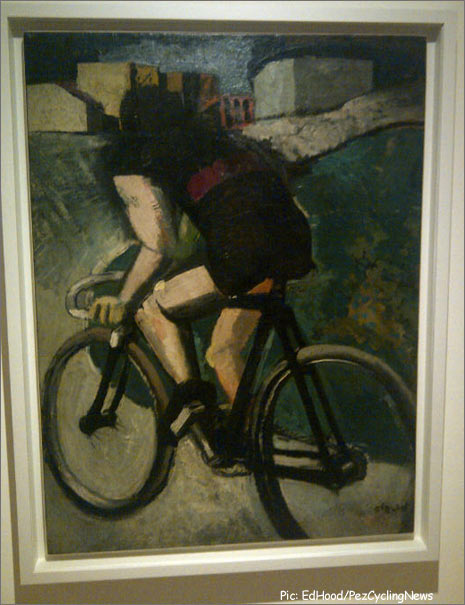 But there were more conventional representations of cyclists on display, and – real bikes. 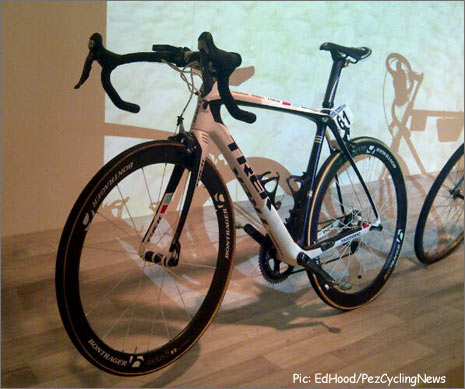 Not least, one of Fabian Cancellara’s Treks. I was thinking that it’s not every day that the guys at Trek get a request for one of their bikes to go on display at the Guggenheim. 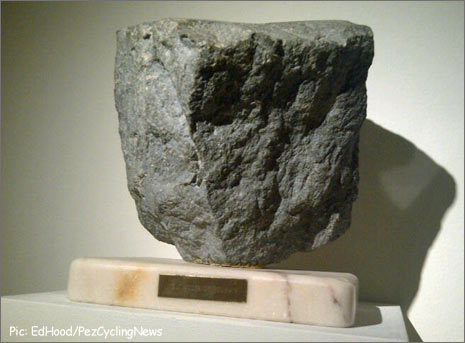 And continuing with the ‘man of the pave’ theme, there was one of the late, great Franco Ballerini’s mounted cobble stones, which he received for one of his Paris-Roubaix victories. 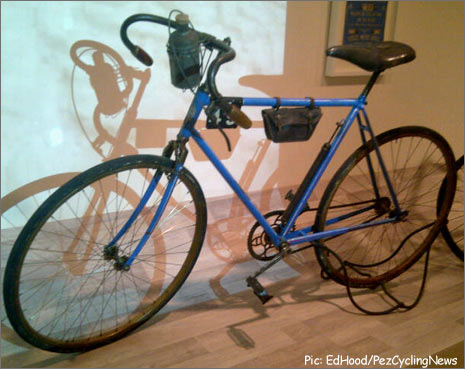 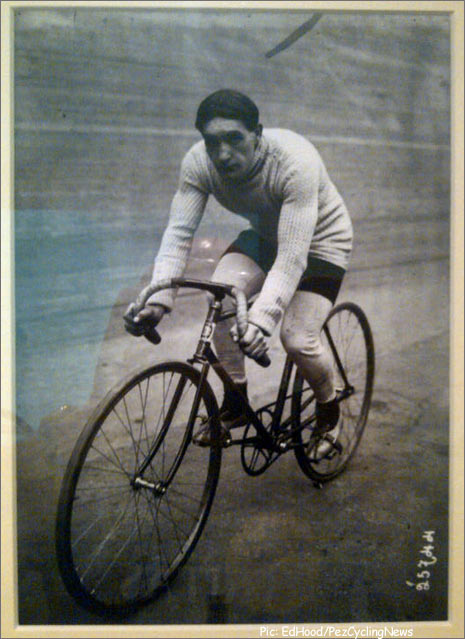 They had also sourced some old gems of machines from the; ‘when men were men’ era and when the only thing you did with carbon was stick it on the fire. It did occur to me that Colby Pearce’s thoughts on ‘bike fit’ for one of these machines would be interesting to hear. 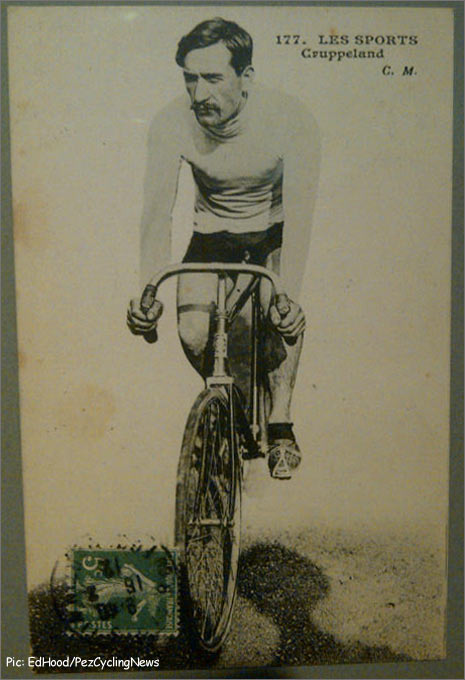 They were hard men back then, riding huge distances on largely unpaved roads on heavy unsophisticated machines. 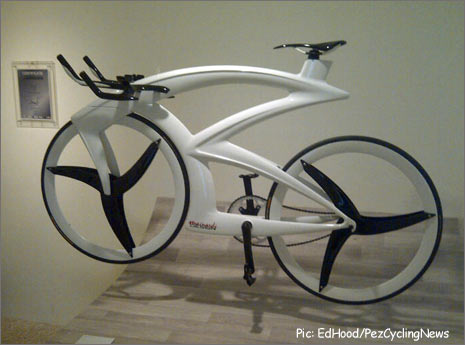 And as the end piece of the exhibition, there was a machine which the Futurists would surely have approved of. It pulls off the trick they’d have liked – looking fast even when you’re standing still.