An amateur team with a 5 year plan to step up to division 2 pro status recently headed out to the 28th Annual Tucson Bicycle Classic. Supported by an active community, team directors, and numerous sponsors, this working class group of racers enter the season, putting hard earned winter miles on the southern Arizona roads, in their first races towards the team’s 5 year plan. 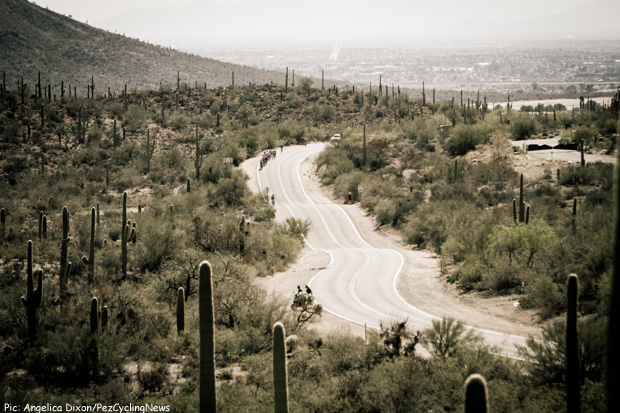 How does a team turn pro? Well, in this case it starts with a few guys who were looking beyond their 9-5 world to do something with their weekend passion of racing bikes. A few years ago an opportunity presented itself and they were able to change from riders on a team to the ones holding the reins of Zia Velo Cycling. They allowed themselves a bit of a dream, to get organized and focus on creating a team within this longstanding cycling club. That dream grew, quickly. They soon came up with a 5 year plan of creating a Division 2 Pro cycling team. Their careers exposed them to hard work, beaurocracy, and frustration. All experiences needed to take on this endeavor. 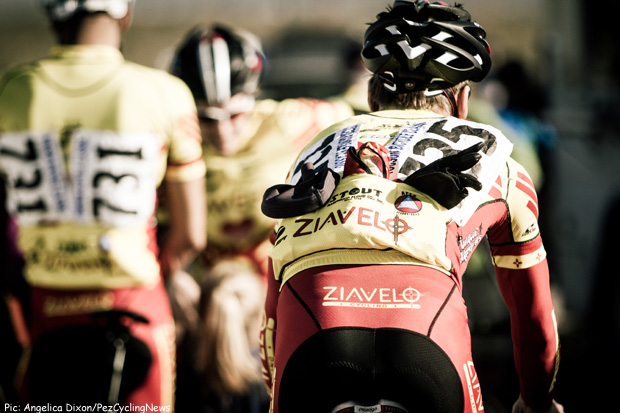 Zia gearing up at the Tucson Bicycle Classic

I was approached by Zia Velo 5 months before agreeing to join as a… well they weren’t quite sure. ‘A director for the riders, a coach … Someone to help show these guys what to do on the road’. That period of time allowed me to observe the supporting structure behind this team and the riders I would be working with.

I challenged myself to honestly answer if I would be able to fulfill what it was that Zia needed and was asking of me. And who was I? Just some old cat 2 racer who had some success over a 20 year period. But I soon remembered the ‘old dogs’ that taught me how to be a cyclist and then a racer. Despite the volumes written about the sport and how to race, it takes being thrown into the fight to learn how to read a race, positioning in a group, work a breakaway, how to mask pain when suffering like a rented mule, and how to win …

Every race has its own unique subtlety. Which is great to talk about it, but you’ve got to be able to recognize the subtleties, to then make the right decisions. These were the lessons I was taught and I realized that I was one of the old dogs now, and I was ready to pass the lessons on. 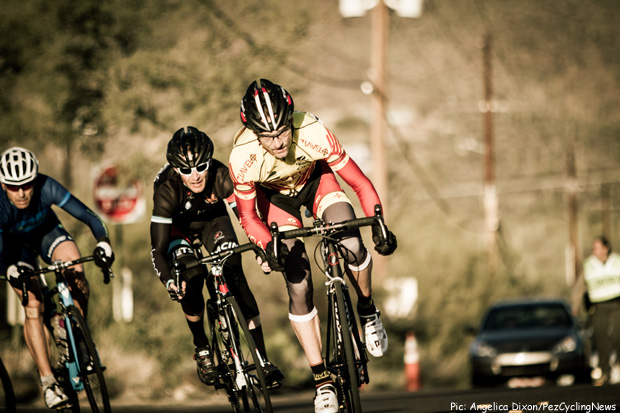 As the season progressed, I watched. Zia definitely had talent, but they needed help in making that talent work as a cohesive force. I could help with that. The riders had the required youthful energy and all of them appeared short on ego, while long on selflessness. To find such a pervasive lack of ego in cycling is a rare thing and that really impressed me. To reach this 5 year goal, you needed to start with this type of culture.

Zia Velo is based out of Las Cruces, New Mexico. It has been an official club for 29 years, making it one of the oldest cycling clubs in the states. The club members have demonstrated a sense of community through the years by continuously supporting and fundraising for local charities and sporting events. The “Zia” is New Mexico’s state flag symbol based on the Zia tribes beliefs that there are four sacred obligations that one must develope – a strong body, a clear mind, a pure spirit, and a devotion to the welfare of others. The team riders, club members, and directors were all engaged, knowingly or not, in this basic philosophic construct. It was this understanding that finalized my decision and to join in with this ‘dream’. 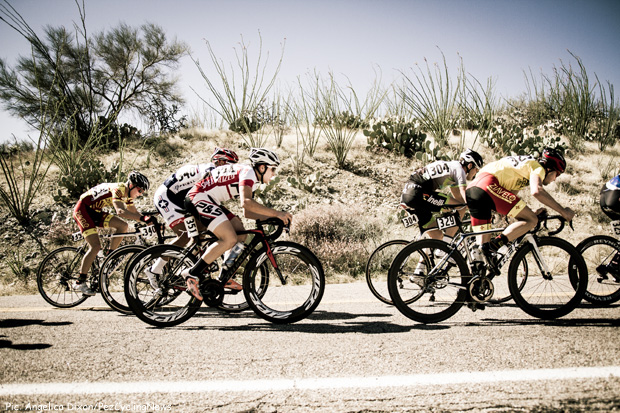 Zia riders, Kaden and Kyle, defending the yellow jersey in the hills of Tucson

Pro Tour teams set the standards for the sport of cycling, but recent years have created an ever changing landscape for sponsorship dollars and alternative measures in acquiring those dollars. We all read about the top tier teams struggling to find funding, so imagine life for fledgling teams or even long standing clubs like Zia Velo. Their solid reputation in the community, and throughout the state help, but the directors have to be quite imaginative and are constantly re-working the status quo for sponsorship dollars. They impress me daily. 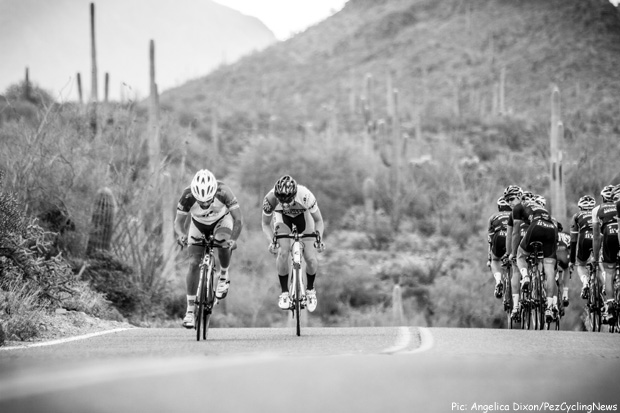 Fizik pro’s warming up and checking out the amateurs

So, with the funding in place (and it’s an ongoing process) and the foundation of riders established, it was time to get them together on the road. Easier said than done when considering the team is made up of college kids right through to middle aged guys with careers and young families. But we were able to do it. Twice. It was crucial and really helped to set up ‘The Dream’, team philosophy, racing philosophy, rider responsibilities, and goals.

The team riders had to truly buy into the belief in their talent, their teammates, and their responsibilities as a Zia rider. This was, and perhaps is, a unique concept for riders. It’s not about simply racing a bike, as everything hinges on how a team rider represents themselves, their teammates, their sponsors, and how they show respect to race organizers, volunteers, officials, fellow racers and cycling’s unwritten code of ethics. This was the team’s true goal, not the results. Those would come but only if the riders bought into this philosphy of how to be a team. The riders were given an out, no one left. 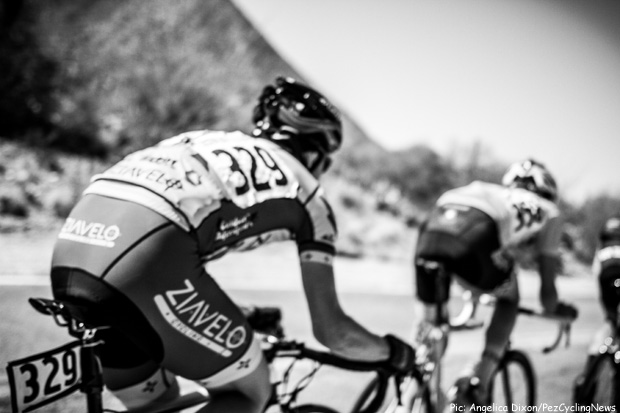 Pro’s have their Classics and Tours, their rites of passage. Well, amateurs do as well. The Valley of the Sun Stage race in Arizona, is one such race. It’s the unofficial kick off to the cycling season for the southwest. California, Nevada, Arizona riders show up with tan lines well established from the winter miles outside. While New Mexico is considered desert, it’s high desert. Much of populated areas of the state are at 5,000+ft in elevation. Winter training is a hit or miss affair with the weather.

Zia sent three cat 2 riders to VOS, their first race of the season and their first as a cat 2 team. A fine TT put Marcel Berger in 2nd place. The team worked as a unit keeping Marcel well placed, out of trouble in the road race and the crit, ending up with 3rd place overall. They rode aggressively, sacrificed individual results for their GC man, learned a great deal, and got a podium in a major regional stage race. Mission accomplished. 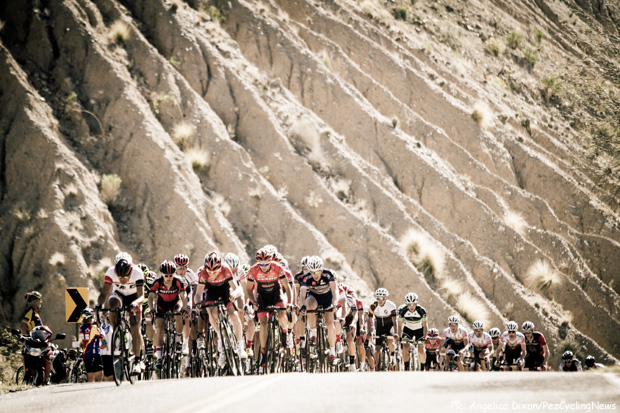 The next big goal was Tucson Bicycle Classic. 2014 was the 28th edition of this race. Another three-stage race comprised of a short TT, and challenging courses for the road and circuit stages. Time bonuses for the top three placings on the road stages, added to the tactical challenge of TBC. It was hoped that the Cat 2 riders would be able to represent again but illness and the impending birth of a child meant only one cat 2 rider represented Zia. Another goal for the team was to get the cat 3 riders to upgrade to cat 2. TBC was the race for these guys to show themselves, but life responsibilities, work, illness meant that two riders would race the cat 3’s. Were it not for the 18 year old junior, Kaden Murdock, stepping up to help teammate Kyle Martinez, instead of racing juniors, there would only be one rider. 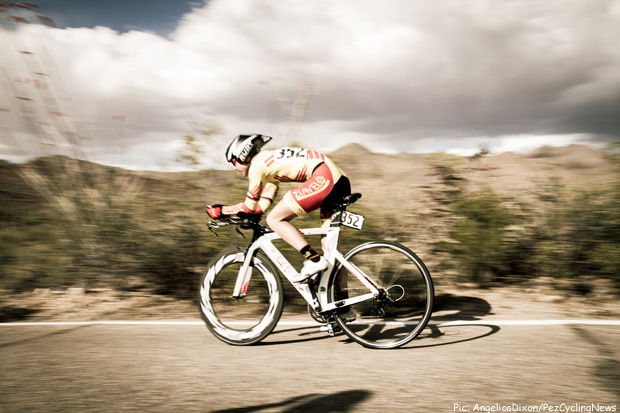 Kaden working his junior gears in the TT

Kyle won the TT, a fantastic result but defending the leaders jersey against a tough and organized cat 3 field would be tough. The two riders fought hard with Kaden leading the peloton or chasing attacks spun out on junior gears for his teammate. That work saw them take 3rd place on GC. Kyle took enough points from TBC to upgrade to Cat 2. An impressive weekend and again, mission accomplished. 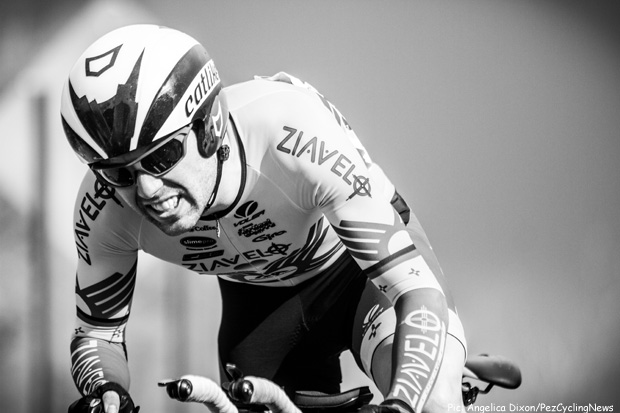 No matter the category, TT’s are about pain, as Kyle reveals

With the 2014 season just starting, Zia has experienced the complexity of getting riders to races who have to work, or go to college, or who are starting families … But it’s understood and embraced. It’s life and it’s all part of the journey. Zia has also seen a group of riders who essentially once showed up at races with the same kit, change into a team. Just as what was promised at the beginning of the year, if they raced as a team, the results would come … 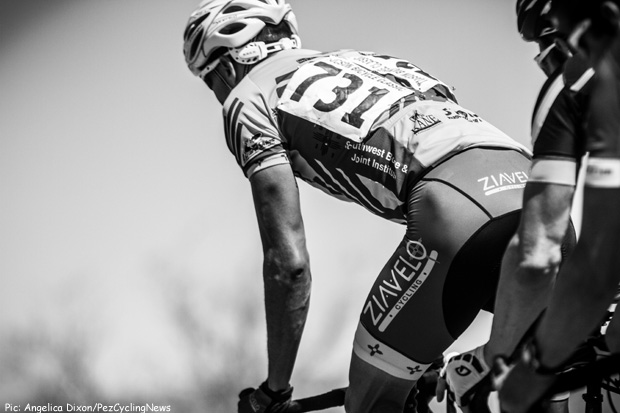