Bam! It’s another Pez-Clusive– just in time for Christmas! We talk turkey with Tyler at the team training camp, a new Tour strategy, hangin’ with the new boys, and getting ready for 2004…

In another of our series, Francis Kelsey of Inside Track Tours met with Tyler and other Team Phonak riders at the recent training camp in Switzerland.

Tyler: I have good first impressions, because it’s always a little complicated at first with a new team but there is a family-like feel within the Phonak organization, and for me, that’s important. So far the team has been very cohesive and worked well together. And that’s important. You have to get along well together off the bike to be able to work well together on the bike. I have seen many good things. We still have to do a lot of work to keep building the team but I believe we are off to a great start. 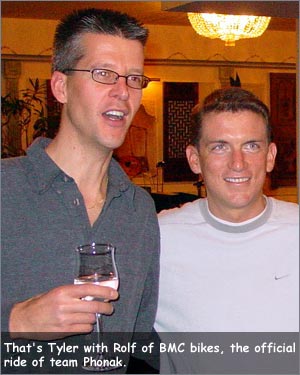 PEZ: You don’t actually spend a lot of time together before the actual season starts do you?

Tyler: That’s right. We have this camp in Lugano and another in January in Spain. It’s super important for all the riders and the staff, to meet with one another and get to know one another, because everyone needs to be able to work well together and most importantly, communicate well with one another.

PEZ: During the week I have seen a lot of team building going on and “team efforts”. Isn’t there something like 9 different nationalities on team Phonak?

Tyler: It’s true, and again why it is so important to be able to bring everyone together as a group. All of the riders got together last night to discuss what areas could be improved on for the upcoming season. One of our early focuses with this team is developing an effective system of communication. At the dinner table everyone speaks the language that they are the most comfortable with but the group has decided that come race time we will have two languages, French and Spanish. We will all focus on speaking these two languages on the road and everyone will have to learn the common phrases used during a race.

So the French riders who don’t speak Spanish will have to learn the basics of Spanish and vise versa. Each rider is expected to know a few dozen cycling phrases by the time we meet again in January. We will all be tested and if someone doesn’t know them…

PEZ: what not extra miles…?

Tyler: (laughs) well, extra miles or something… we will come up with something. You know it is good to put a little pressure on ourselves now because the more work we do up front, the better we will be in the future.

But that said, the riders aren’t expected to become fluent in either language. But everyone should be able to communicate at the races in the languages we’ve chosen. If there are a dozen different languages being spoken on the race radio, it simply isn’t going to work. This is an area I have to work on along with everyone else. So there is equal pressure on everyone to do this and that’s a good thing. . 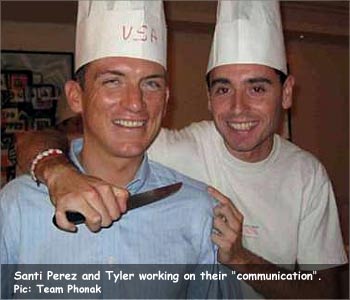 PEZ: So Ty, since your last race in Holland where you had a bad accident that ended your season, many people have been wondering what you have been up to? Sitting around?

Tyler: Well it has actually been a very busy off-season for me. After the accident in Holland I kept riding thinking I would get better. But after 10 to 14 days I didn’t. I didn’t know that my hip was broken. But an eventual MRI revealed that I had a small fracture inside the top of my femur that ran north – south. It wasn’t detectable through an x-ray. So we had no idea it was as bad as it was until I had the scan. After learning this, my season was over, so we packed up the bags, jumped on a plane and headed home.

I’ve been keeping very busy though, working with a lot of my sponsors, doing interviews, etc. I’ve actually spent very little time at home due to all the events I’ve had to attend back in the US. It’s been a really busy schedule but all for good reasons.

I have also been working with Phonak on equipment changes. I think we have made some good adjustments with Speedplay pedals, Easton bars, stems, seat posts and forks, Zipp wheels, Oakley and Clif Bar. I will also be able to continue with Bell helmets. These are a lot of changes for the team, but all of these companies have been supporting me personally through the years. It’s great to bring these sponsors to Phonak and to know they wanted to follow me and are behind me and this team. It’s a feeling that makes me want to work even harder.

Every year there’s been more pressure on me to train harder and improve. I believe there is always room to grow. I think the possibilities within this sport are endless. The most important part for me is continuing to have a passion for cycling, because you need it to be able to ride for 6 hours in the cold. If you have that kind of drive then you can do just about anything.

If you are motivated at the end of the off-season to start the new season, then it is that much easier to get rolling again mentally. I still have that kind of desire and am very happy to be here.

I feel like my enthusiasm rubs off on some of the other riders. At least I hope it does.

PEZ: Yes, I have interviewed a few of the other riders and you seem like a bunch of juniors getting ready for a big race.

Tyler: Yeah, I feel the same thing and it’s good to know everyone else is motivated. Straight away, when I came to meet the riders the first time, there was a special feeling in the air. Sometimes it takes just a small change to bring a team to the next level.

PEZ: I was talking with Oscar Sevilla and his role at Phonak. How do you seem him fitting in with the team and his situation?

Tyler: He is one of the most talented riders in the world. It’s great to have him on Phonak. When I first heard the news he was going to be coming to the team, I was very excited. It will be great to have his support at a race like the Tour de France. It will be just incredible. He has expressed his enthusiasm for the Tour, and wants to ride hard to support me and the team. Our game plan will be to focus on just one rider for the GC.

At CSC we focused on multiple objectives and we achieved multiple goals. But if a team wants to finish on the podium, they have to focus specifically on that objective, which means you may also have to sacrifice other objectives for that goal. That doesn’t mean anyone can say what CSC did was wrong in 2003; I mean – we had 3 guys in the top 15; won 3 stages and the team GC. But when you are targeting the podium I think you have to say, OK all for one. And I feel that on this team – Phonak this will be the case. With this strategy, you know by the end of the race you gave it everything you had.

PEZ: Will you have more or less the same schedule as Oscar?

Tyler: Our schedules will be set at our January training camp. I will most likely ride a similar program to last year, and I assume Oscar and I will be at many of the same races since our goals are the same, which is to be strong at the Tour de France.

PEZ: One last question, what about these Olympics coming up in 2004?

Tyler: I competed at the 2000 Olympics in Sydney, which took place in late September. I didn’t have the best form at that point, and I was disappointed with my performance there. I was probably tired after a long season. This year the Olympics are a bit earlier and that suits my schedule a little better. My two big focuses of the year will be the Tour and the Olympics. It’s still a dream of mine to bring home a medal.

PEZ: So we can look forward to seeing Tyler Hamilton on a box of Wheeties?

Tyler: I don’t know about that. We’ll see.

PEZ: Thanks Tyler and have a great season!

Next up is the team presentation in Stдfa, Switzerland January 15th and their first training camp starting the following day in Sevilla, Spain.

Talk with you soon,

Get more info at the Team Phonak website: www.phonak-cycling.ch

And Check out how you can train like a pro in Europe, or follow a race in style with Inside Track Tours.